A series of eddy-holes around the outside of Sherburne Bend make for good picnic stops and possible campsites.  It is a favorite fishing spot for Cajun fishermen catching shad.  You might have already seen this above Krotz Springs.  If not, you’ll see it further downstream.  From the John Ruskey Rivergator Journals: “Some burly Cajuns were scooping shad out of the deep muddy waters using a large hoop net with a long handle.  They were tied up to some trees in a strategic place where the water concentrates and is propelled outwards and downwards.  The shad prefer this type of fast water environment.  They swim upstream into the strong currents and snatch up smaller fish.  The Cajuns take advantage of this habit.  They create an additional acceleration of water speed by building an angled wall out of plywood along the tree’s edge, which pushes the water off the shore and makes an swirling eddy place below.  Here they park their boats, in the eddy at the ending edge of the plywood wall, and then stand up and swish their nets downstream with the water flow in a cyclical pattern, like a waterwheel.  The poor unsuspecting shad get caught swimming upstream by the downstream moving net, and are collected by the crafty Cajuns.”

A small sand dune emerges at Fran Diesl Point in medium waters, and is good low or medium water camping, but goes under in higher water levels.

A small sand dune is found here good for picnicking up to 22KG, but not recommended for camping due to Valero Docks across the river.

Bayou Big Graw used to meet the Atchafalaya here in the pre-levee days.  There is a one-lane concrete ramp located here at the Campground Krotz Springs.  This is an RV campground, but any paddlers desiring company could pull up here and picnic, and resupply with water, and even camp.  You will need to pay a nominal camping fee.

In the pre-levee days Bayou Courtableau joined the Atchafalaya here.  If you feel like exploring, it is a beautiful place.  Locate the mouth at the top of Courtableau Bend, secure your vessel, and walk into the deep woods along the old waterway.

Good camping can be found in the woods around Coswell Point if the river is low or medium high, near mile 49.7 LBD is a small pull out eddy that makes a good landing with a tall bank behind that would be a nice protected place up to flood stage 30KG.  Otherwise continue downstream several hundred yards and locate something within the giant bay 50.8 LBD at the top of the next bend.  In high water, you can find possible protected campsites within the woods across the river on Courtableau Point (51 RBD).

Possible protected campsites within the woods at Courtableau Point, but steep bank makes landings difficult except when river is high, ideally bank full.  The big open bay opposite Courtableau Point makes a beautiful low water camp in an unusual sand spit that forms in a gentle curve around the outside of the bay, with sandy places and muddy places.

The East bank levee comes to an and near mile 52.4 LBD allowing the river to flow over the bankside and wander where it will as it rises above bank full.  This is where the Atchafalaya starts coming into its own as a thriving, breathing organism, and functioning as one contiguous biota. 54.7 Two 4” Gas Pipelines (Equilon Pipeline Co)

Steep one-lane boat revetment ramp drops into the river at a downstream angle.  Remote location with no easy access to any places for resupply.  This would make a good rendezvous location however, or a good place to start or end a shorter river trip, provided you had a driver knowledgable with the area.

Two blue holes have formed over years of flooding at mile 55, one on each side of the river.  Both of these are beautiful places to stop and explore.

A sand dune accumulates on the outside edge of a small alcove eddy at the top end of Alabama Point, and would make an excellent landing for a picnic, or a campsite.  Take your choice of camping on the top of the open bar, or edging into the woods for protection from wind or storms.  The aforementioned blue hole is not far upstream, and would make a good walk.  Wear red and be wary of hunters during hunting season.

Good picnic site on grassy point at the split of the Old Atchafalaya River and the Pilot’s Channel which should be dry up to 25KG.  You could also make a possible camp here, but there are 3 small houses close by on the other side of the eddy.

The Atchafalaya divides into two big channels at this fork in the road, and both routes make for good paddling and good scenery along the way.  The right hand fork is the Old Channel of the Atchafalaya.  And the left hand fork is the New Channel, sometimes called the “Whiskey Bay Pilot Channel.”   This point also marks the end of the levee on the west bank.  From here on the batture opens up like a blossoming flower, eventually becoming 20 miles wide.  Most of the Atchafalaya River flows into the Whiskey Bay Pilot Channel, hence it is the fastest route, and is indeed today considered the main channel.  This route is a good choice if you want to make the best speed possible, and aren’t interested in some sight-seeing and exploring some of the back channels of the Atchafalaya Basin.  At most water levels the Whiskey Bay Pilot Channel will cut your time in half over the Old Channel.  The Whiskey Bay Pilot Channel is more forested and feels wilder.  On the other hand, you will miss a rare opportunity for small channel, or back channel paddling through the extensive forests, swamps of the Atchfalaya Basin, and some of its small communities.  The Atchafalaya Basin is a place where man and nature coexist in some kind of harmony; where Cajun families live on the waterways and the outdoors is an intimate part of their daily lives; where houses have been built on stilts hanging over the river, or on wooded banks of the bayou, or on houseboats, and where the communities end the deep woods begin.  You will experience some of this intimacy with nature, this deep sense of place following the Old Channel of the Atchfalaya River through Butte La Rose.  Either way you go will eventually bring you back to the same place, which is the bottom end of Splice Island, where the two channels rejoin, at mile 75.5. 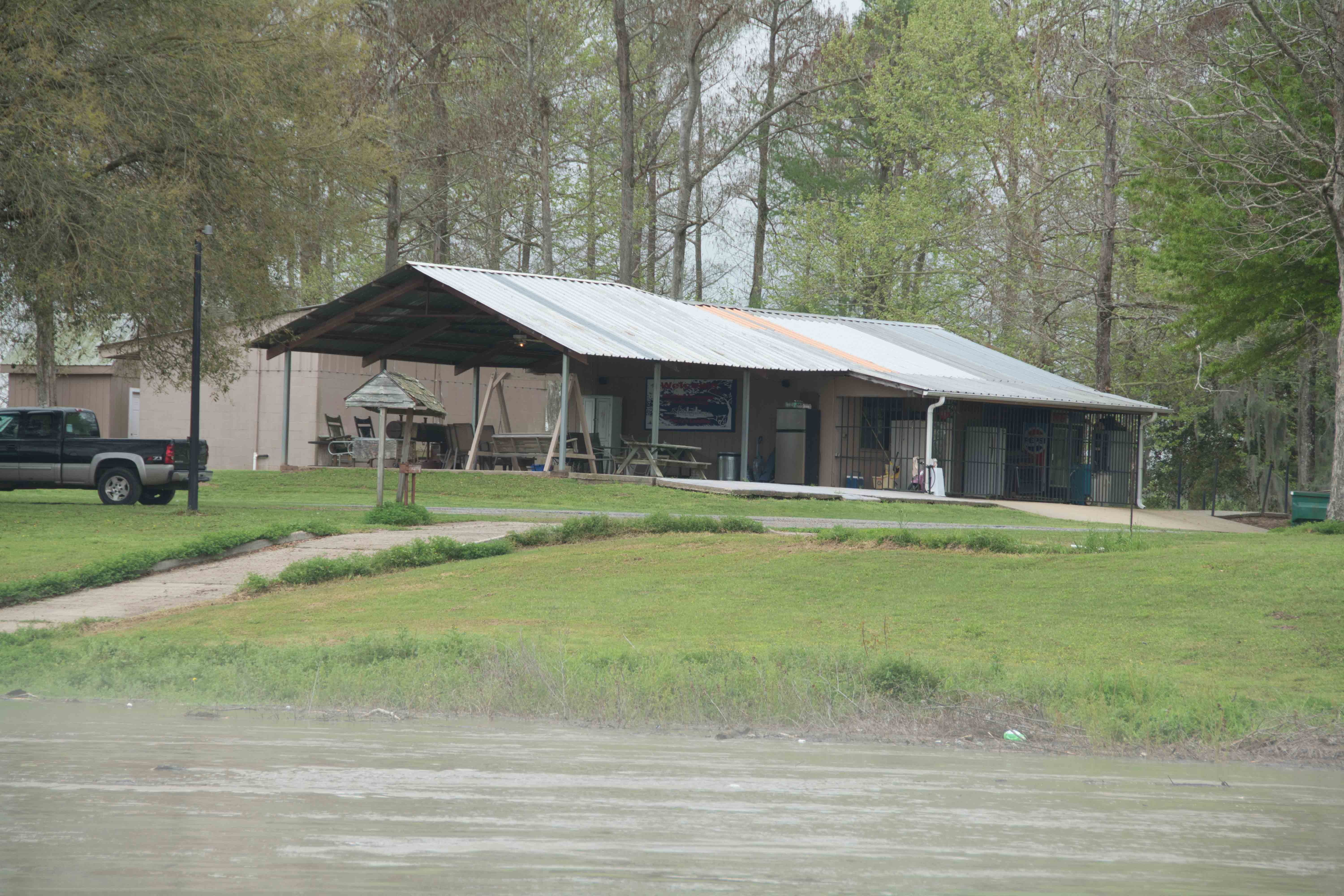 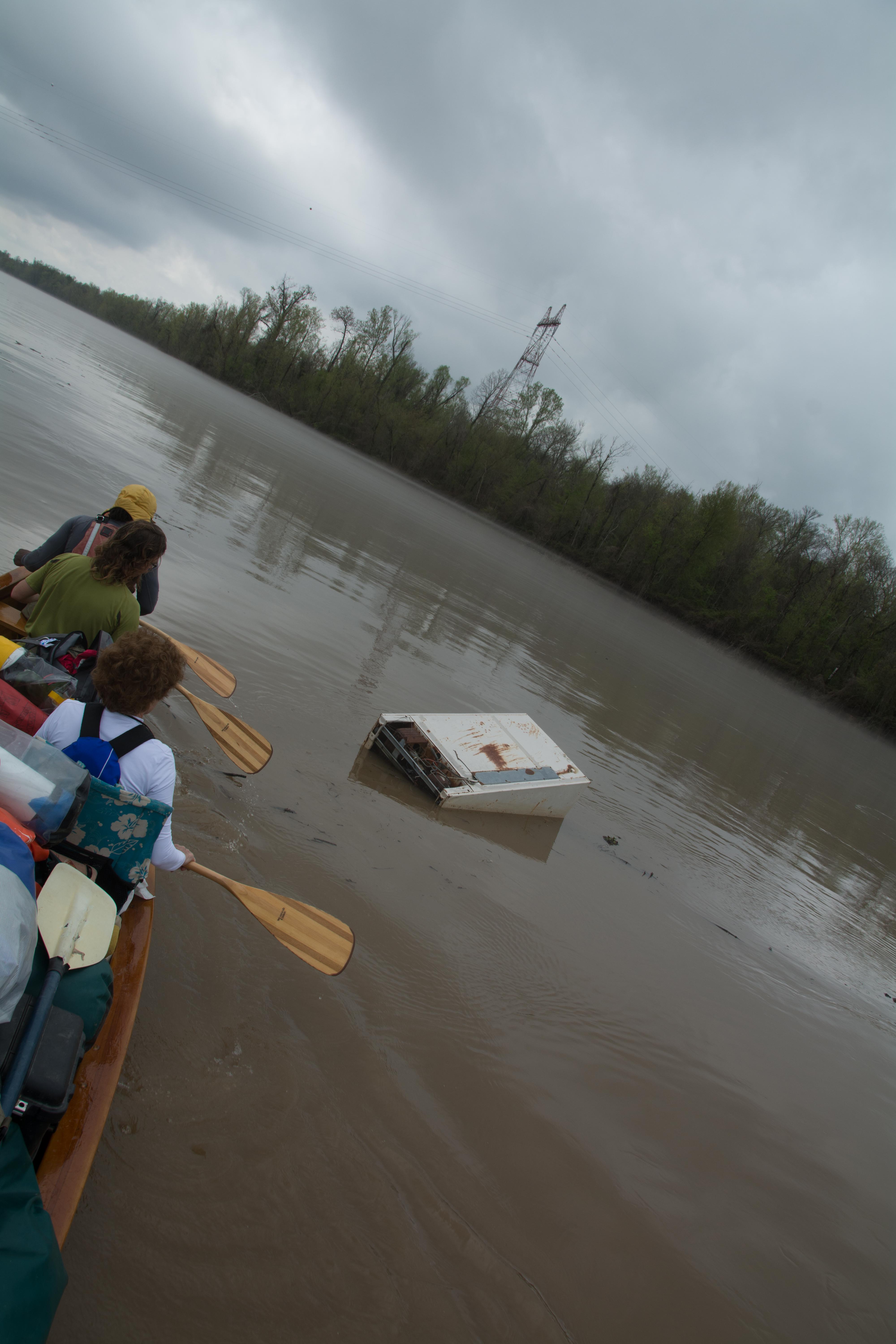 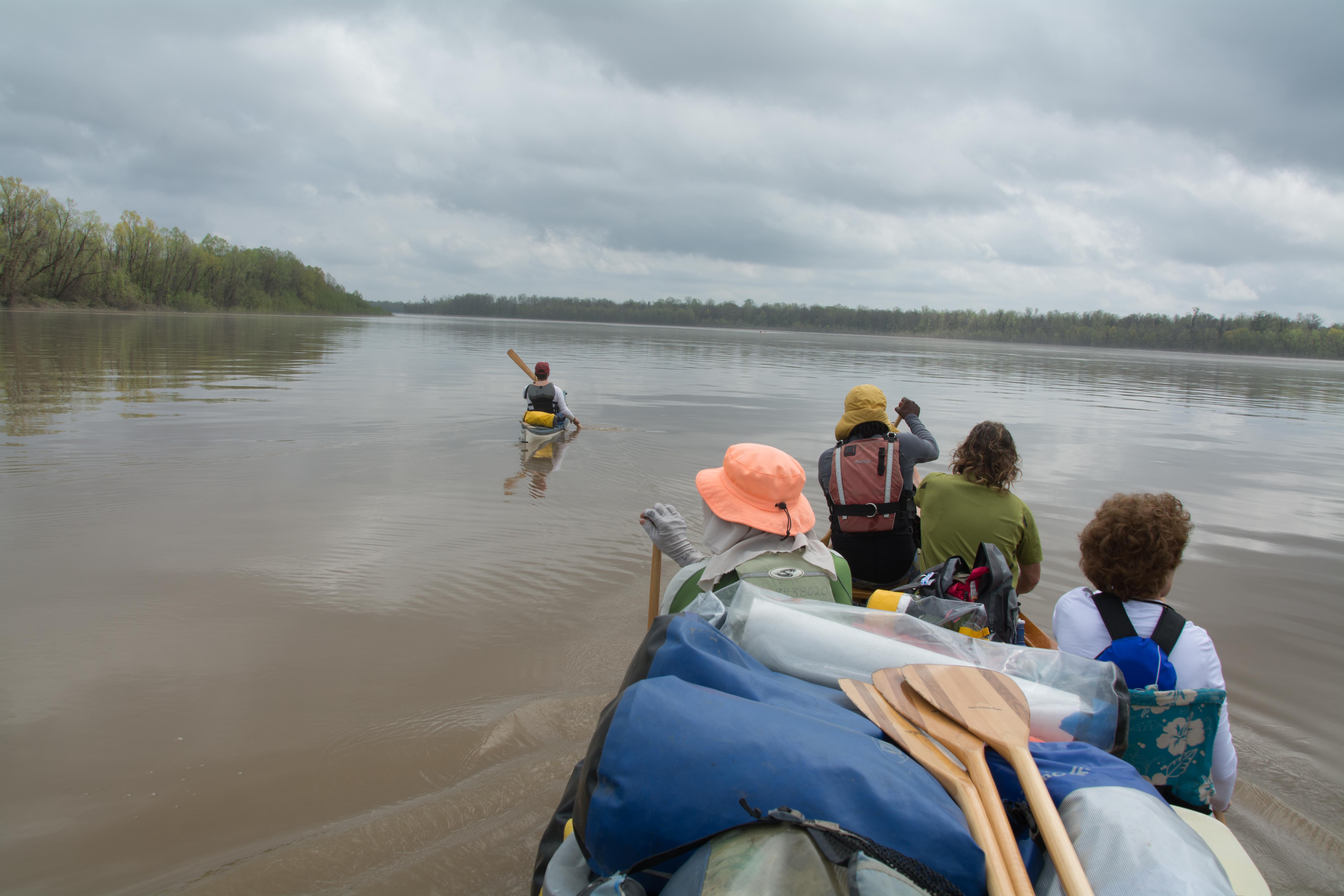 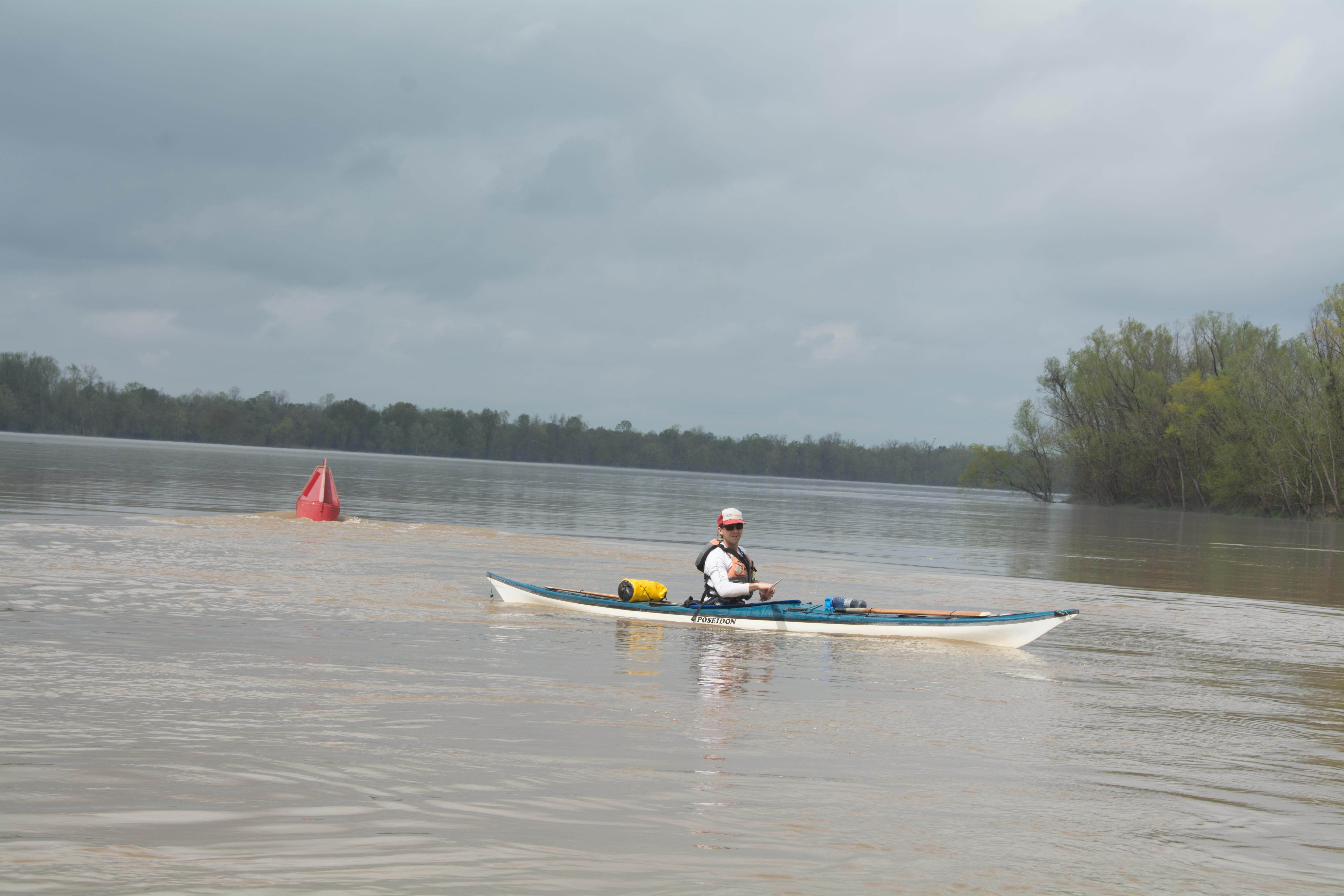 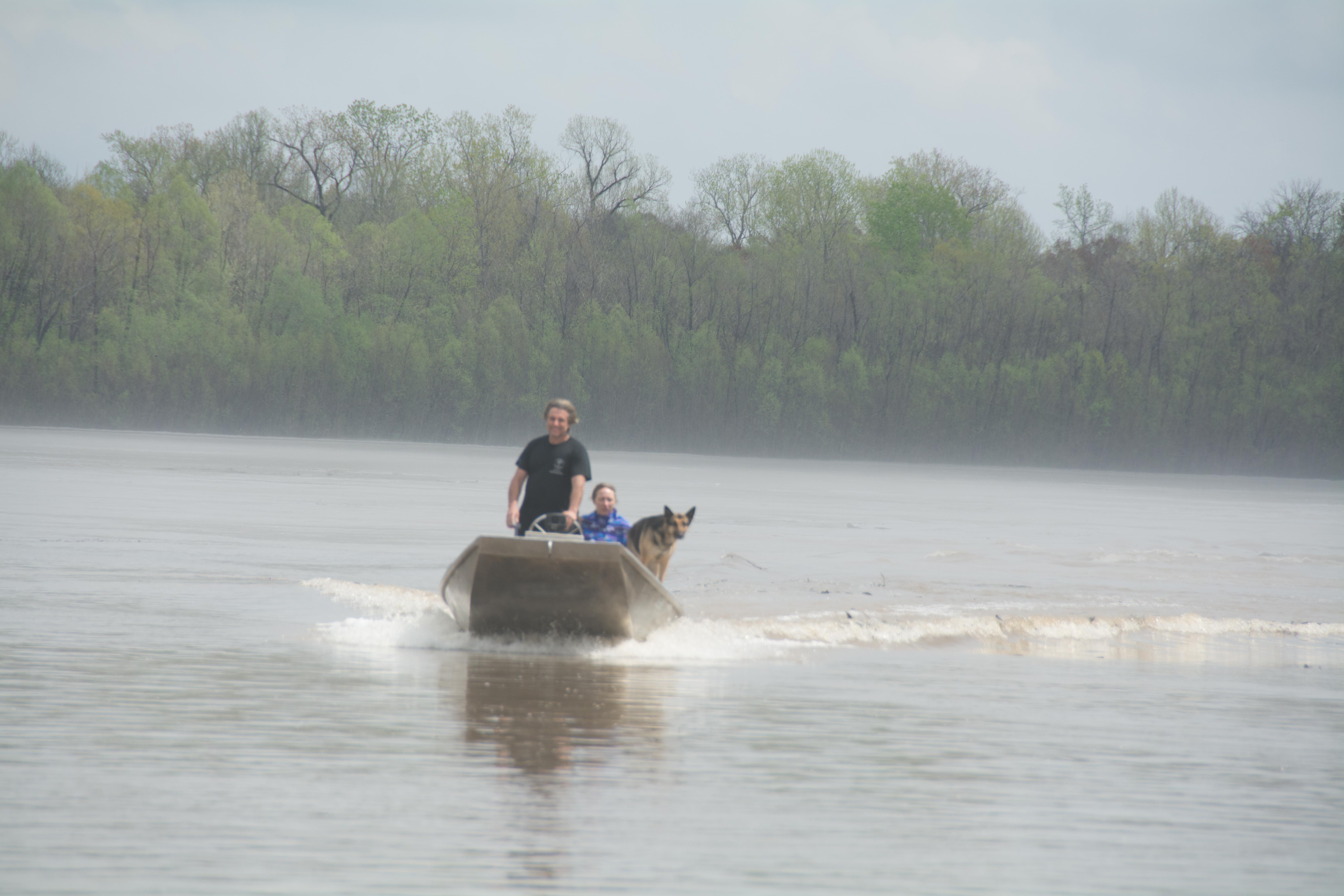 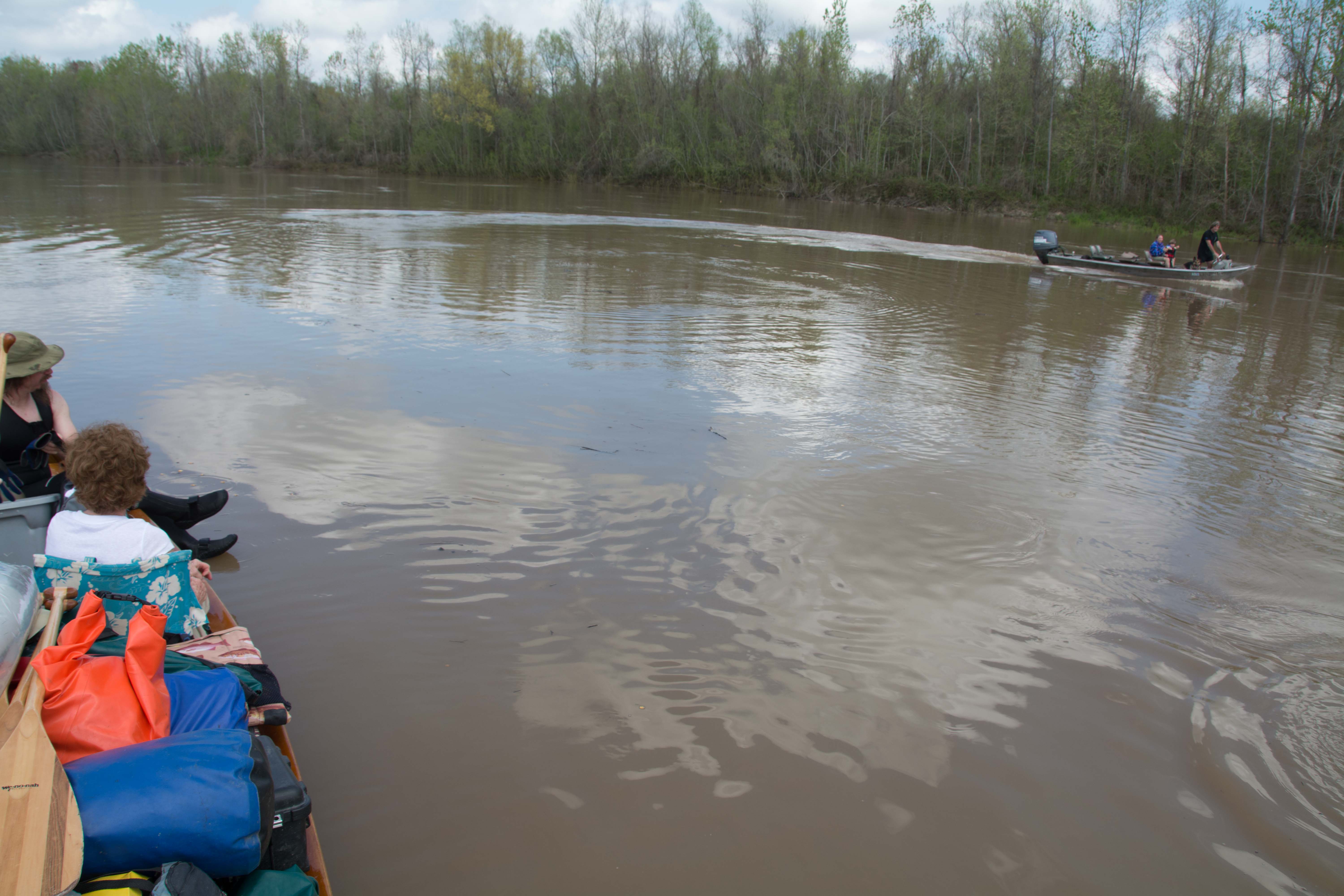 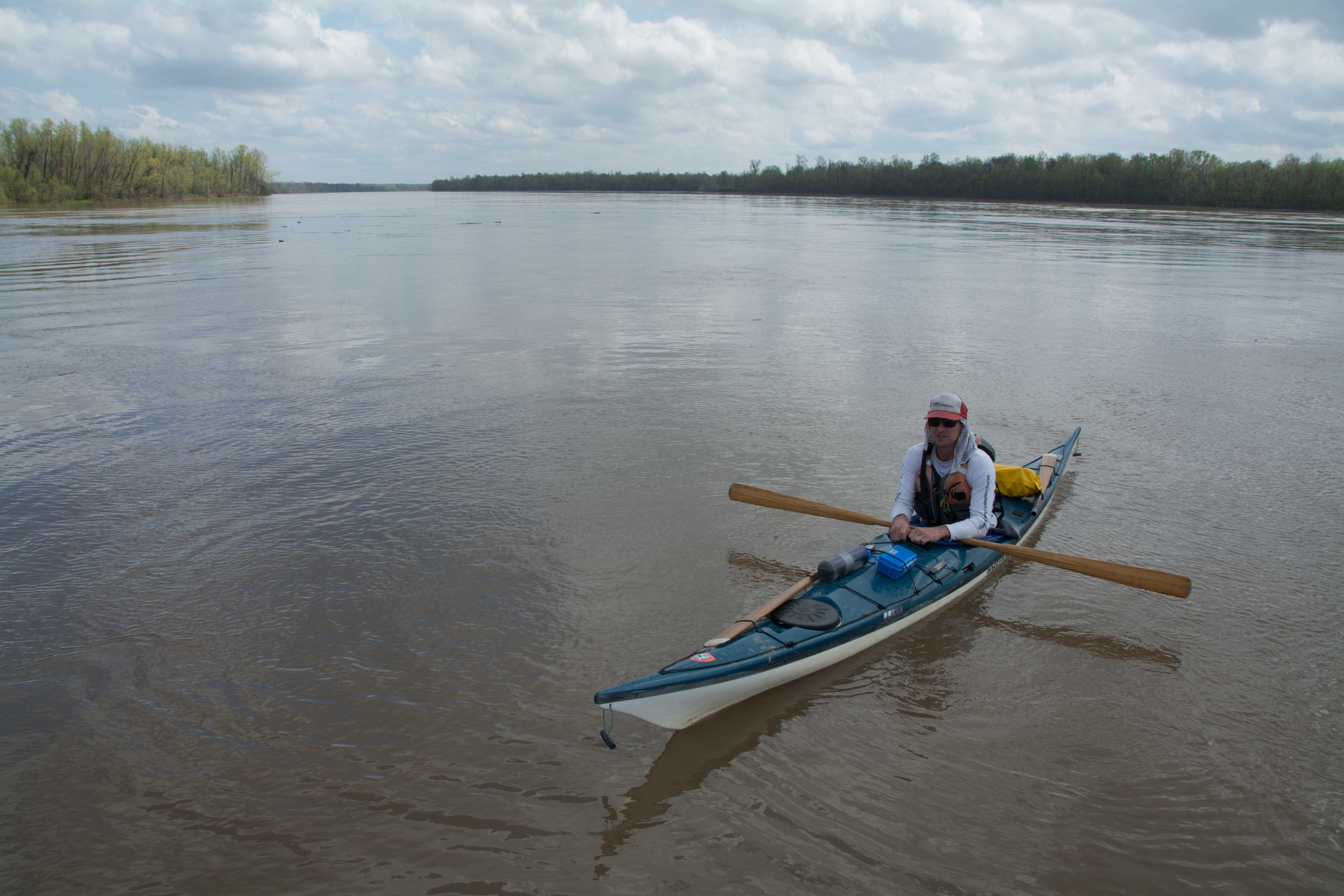 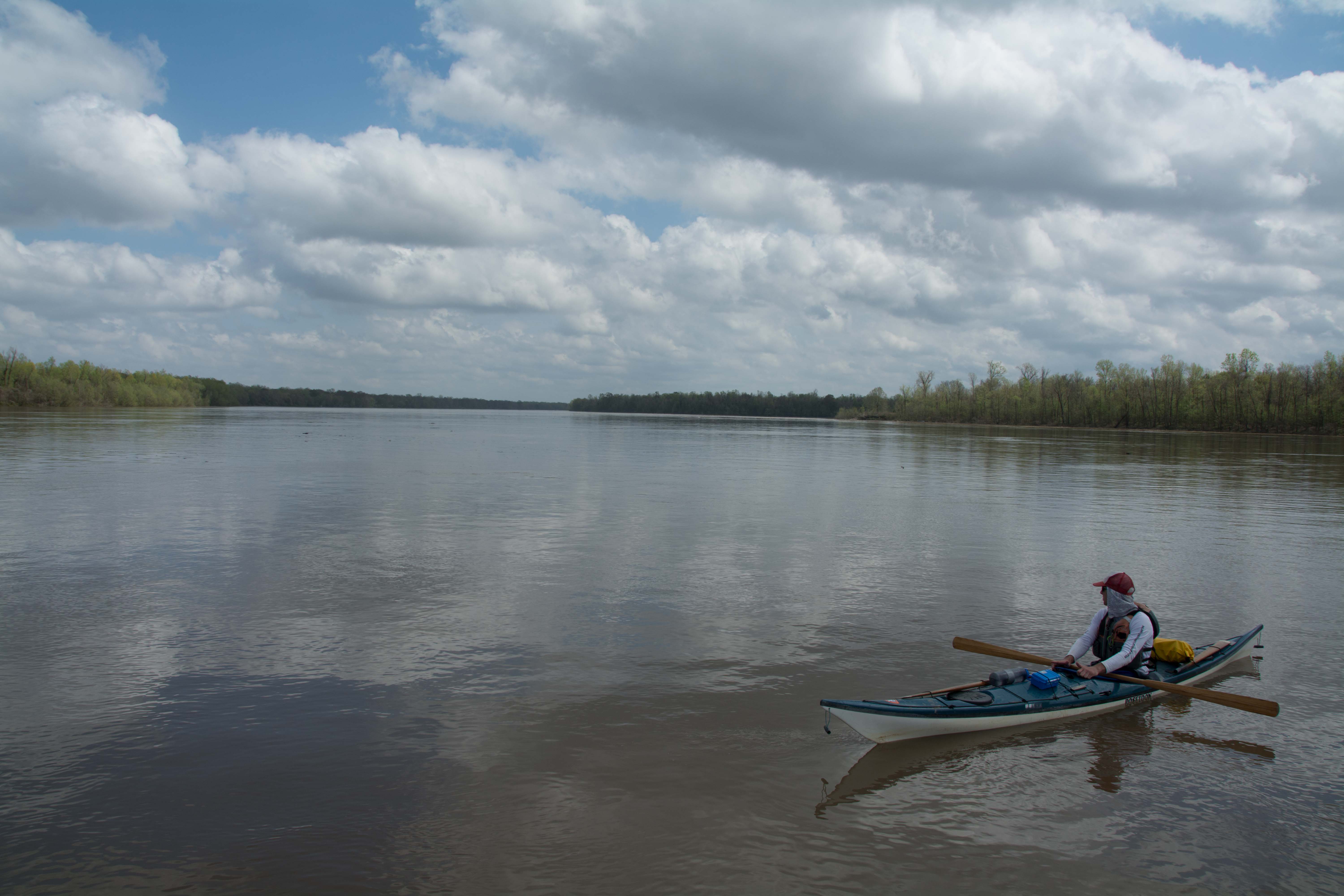 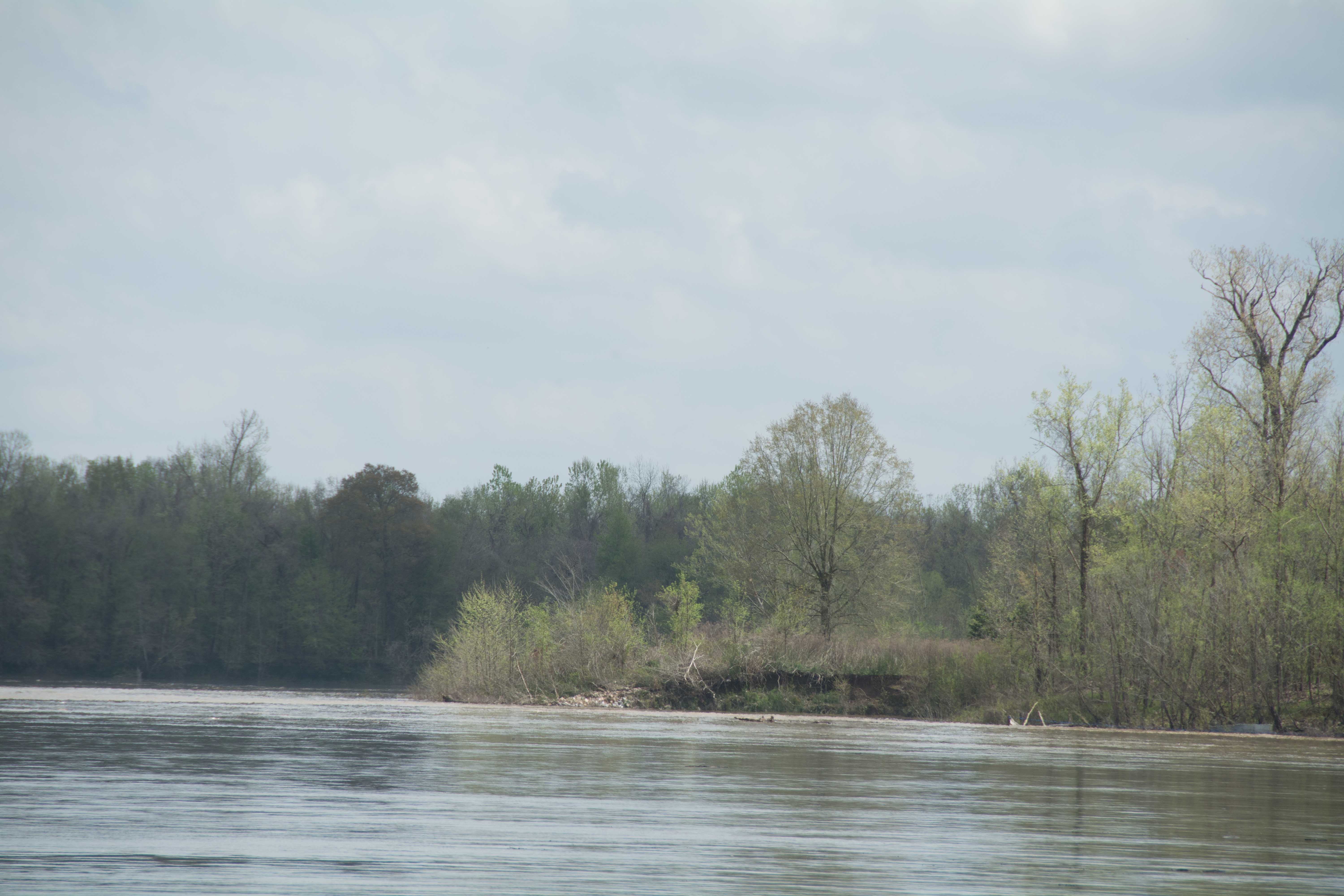 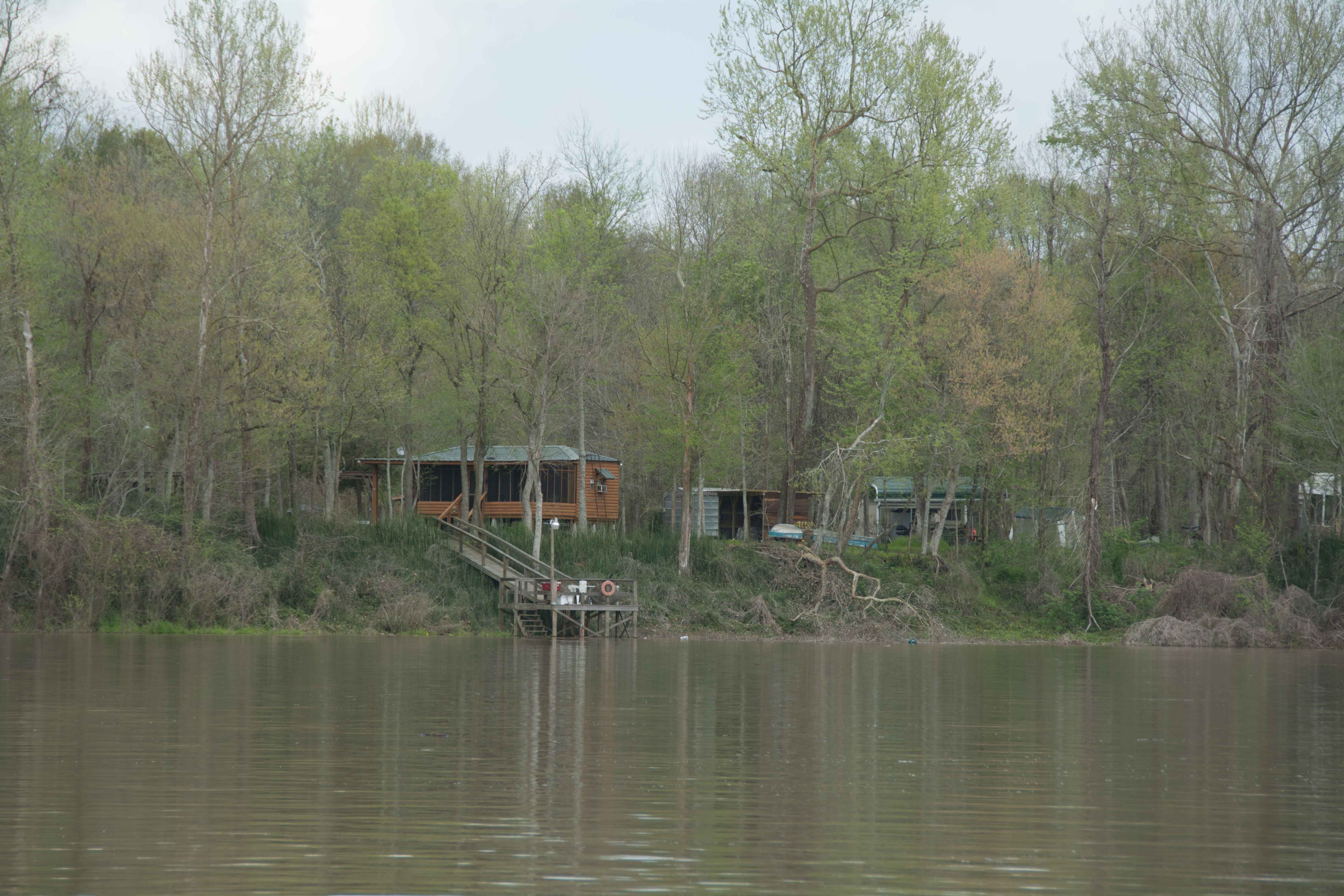 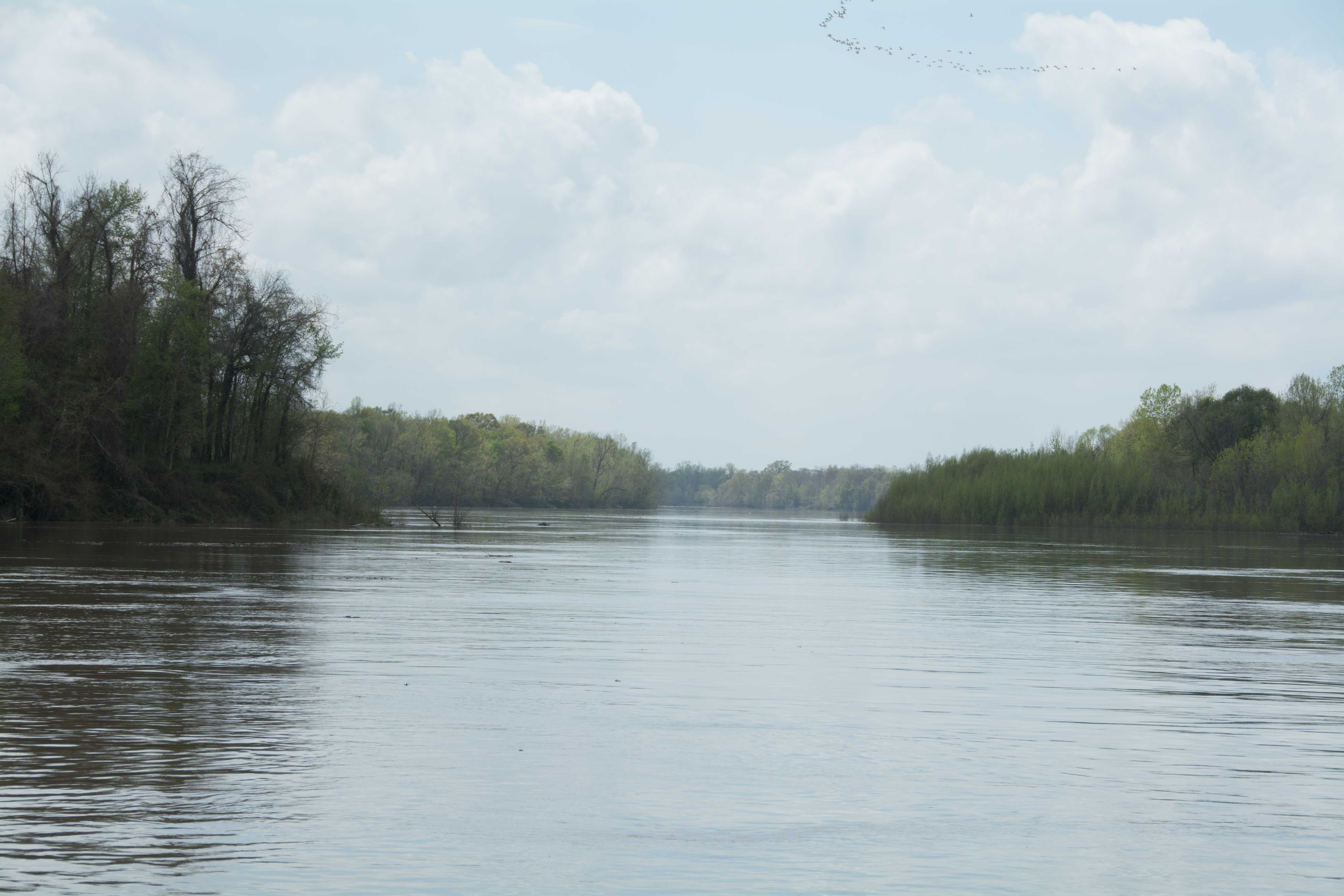