Leaving the Helena Harbor and heading downstream:  As you push from the Helena Harbor and paddle downstream you will enjoy some of the industrial works of mankind that line the busy channel for several miles below the bridge.  See below for writing and recommendations about getting under the Helena Bridge.  As you continue downstream past the bridge a long line of docking facilities and industrial installations are found bank right.  Paddlers will want to keep a wide buffer zone of safety between your line of travel and any fleeted barges, any docks, piers, or anything else anchored or stationary in the current.  If you inadvertently slide into the piers of a dock in these powerful waters you will likely be  capsized.   Two miles downstream of the bridge the Arkansas Power & Light Dock at 659.4 RBD will be your final industrial hazard until you reach Friars Point.

What are fleeted barges?  When any industrial or agricultural facility are filling or emptying barges, they tie them up along the bank of the river, sometimes one at a time, but more often in longer lines multiple barges deep.  Sometimes they’re only one barge deep, sometimes they’ll tie more than one side-by-side.  In chemical corridor down below Baton Rouge they’ll sometimes tie as many as a hundred long with ten or twelve deep!  Most barges measure 35 x 250 feet but petroleum barges are often longer. The top end of any fleeted barges is an extremely dangerous place.   Always avoid paddling anywhere near the upstream sides of barges — where the water is pushing in and underneath their top ends.  It might look like you could simply hop aboard in case of emergency, but you won’t be able to!  This is a trick of perspective on the big river.  They are much higher off the water than they look.

They might seem innocuous since they aren’t moving, and they’re tied to shore — but voyageurs beware!  Fleeted barges create one of paddler’s worst nightmares: paddling or being pushed (by big boils or strong winds) under the front of a line of fleeted barges.  Several years ago a yacht lost power and was pushed sideways into a line of fleeted barges that was nosing upstream along the main channel near Tom Lee Park in downtown Memphis.  The boat was immediately flipped over and 3 out 5 people did not return. [Citation]  If this happened to a full-sized yacht, you can imagine what would happen to a canoe — and did happen.  Keep reading.  Another tragedy: a pair of canoeists had paddled 2,000 miles from Lake Itasca, Minnesota, and were looking forward to completing their expedition in New Orleans when strong winds pushed them into and then under a wide line of fleeted barges down below Baton Rouge.   They were never seen again. [Citation]

The primary hazard to paddlers on the Lower Mississippi is the one powering through the current — the towboats.  [CLICK HERE]  [Or keep reading below for recommendations & suggestions for paddling around the big towboats in the main channel of the river]  Smaller docking towboats tied up in waiting look innocent but be constantly vigilant for un-announced push-offs.  Smaller tows from Helena Marine are often busy in this section moving barges in and out of grain or oil docking, fleeting barges, and performing other necessary maintenance.  You might see them suddenly run out off shore to service a passing tow.  While big tows will make high rolling wakes immediately behind the tow, these small tows can sometimes create rough wakes with steep and crashing bow waves that will persist for hundreds of yards lateral to the vessel.  Even if a small towboat is on the other side of the river, be vigilant for bow waves. Unlike the slow, predictable and ponderous motions of the big tows, the small ones can charge around docking facilities erratically and make quick changes of direction.   It’s never safe to assume anything about tow traffic.  Conditions are constantly changing and require changing tactics.  Your best procedure is to be constantly on watch and respond accordingly.  Monitor VHF Marine radio Channel 13, and if appropriate announce your presence and intended line of travel.  (Note: harbor facilities and docking facilities sometimes use channel 12 or other VHF channels.  Inquire locally if you need to communicate).

Buoys and other Stationary Objects

The 2nd most dangerous hazard to any river paddler is a stationary object in a strong current.   In smaller rivers stationary hazards include rocks, boulders, trees, snags, bridges, fences, etc.  On the big river the main stationary hazards are fleeted barges, but also includes docks, piers, and buoys.  You will paddle past many docking facilities found within the three mile busy section below the Helena Bridge.  Maintain at least a 100 yard safety distance away from these docks, and more if there appears to be any tow activity.  Keep in mind that the wind can blow you sideways into bankside hazards.  The river currents can also push you laterally across the face of the river.  Watch shoreline landmarks and adjust your angle of travel accordingly.  If necessary ferry out and head for the middle of the river, or the far side LBD.  There are no buoys bank right through this section of river, because the water is deep all the way to the bank.  But if your line of travel takes you into the middle of the river you will find a long line of red buoys (tow pilots call them the nuns for cone-shaped tops) marking the far edge of the navigation channel there.   Oftentimes they are placed at the ends of wing dams or dikes.  And that is indeed normally the case in this bend of the river, the US Coast Guard tries to maintain these buoys in a position of deep water at the ends of what is marked on the map as the Montezuma Bar Dikes.  How deep is the water at the buoy.  Towboats & fully-loaded barges draw nine feet maximum, but to add a little buffer the USCG likes to place them at the twenty foot depth.  This helps accommodate changes of water level in the ever fluctuating Mississippi River. 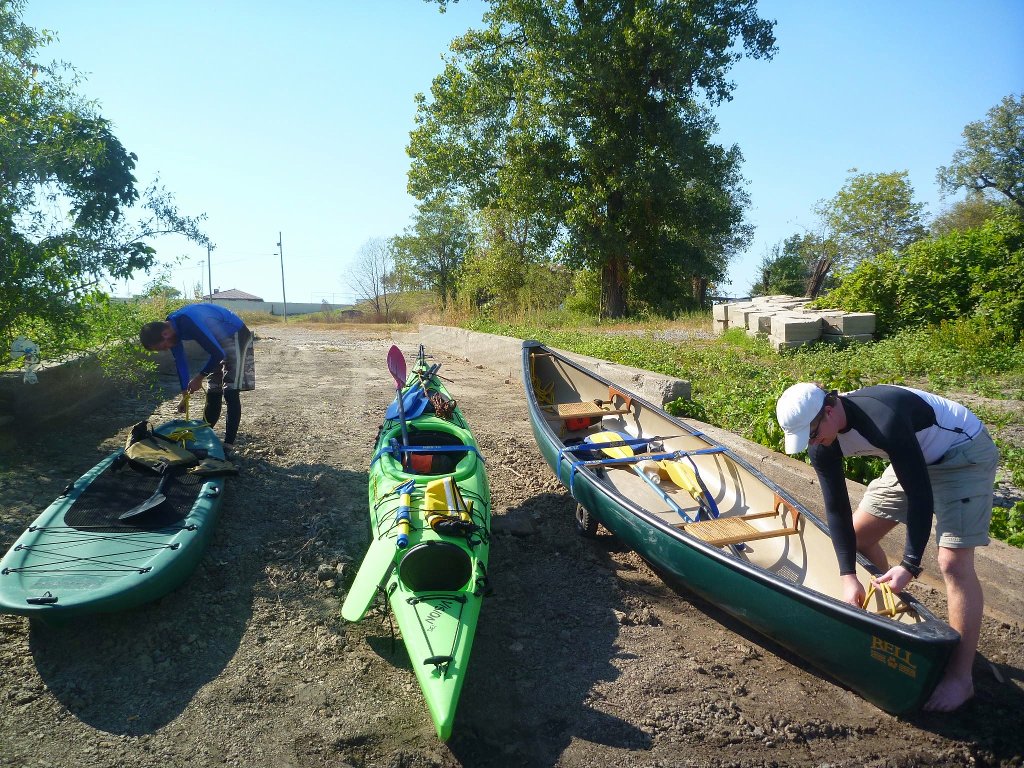 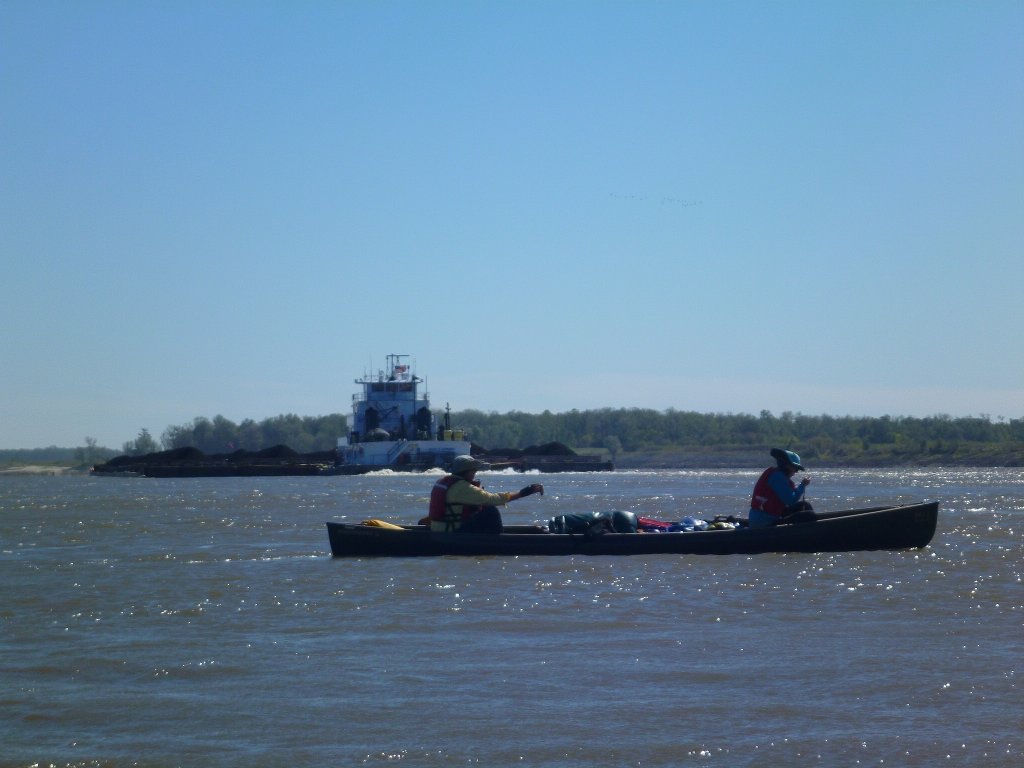 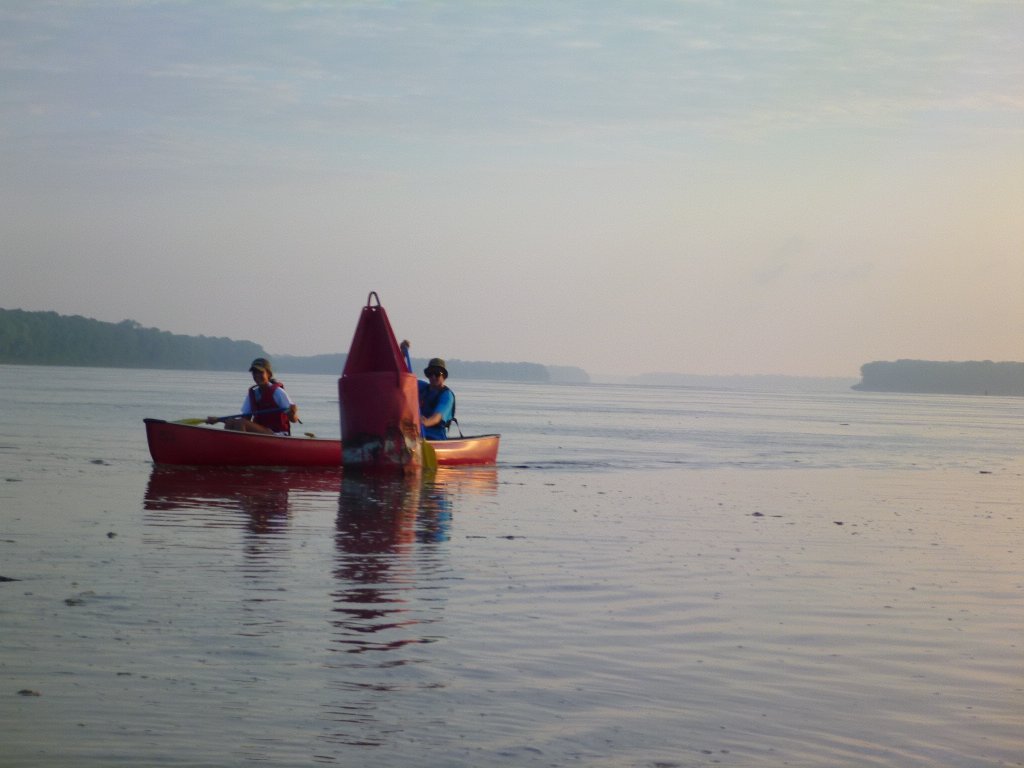