The section of river from Quapaw Landing down to the mouth of the Arkansas and then on down to Vicksburg has become known locally by big river paddlers as the Muddy Waters Wilderness.   Not that its officially designated as such, but its definitely muddy and its definitely wild — and its the homeland of blues great Muddy Waters!

Wild?  Yes!  This is the hardest-to-get-to section of river with the most remote islands and wildest stretches of woods below the Mississippi River Headwaters in the State of Minnesota.  There is only one bridge in 200 miles of river.  There are several big tributary rivers that add to the feeling of wildness, the White and the Arkansas, each of which encompass hundreds of thousands of acres of protected bottomland hardwood forest and confluence with the Mississippi in an incredible labyrinth of islands, forests, bayous, blue holes and back channels.  Its the largest roadless area in the mid-south.  There are more bears than humans.  Several giant islands Big Island and Choctaw Island add to the wildness because they make land access even more difficult.  There are no through roads.  The roads and the levees all dead end in this area.  And as all paddlers know: where their road ends our road begins!  Throughout the entire 200 mile length there is little evidence of civilization.  The paddler enjoys wild open places, deep forests, hidden back channels, rich wildlife, and spectacular camping throughout.

Muddy Waters was born in Rolling Fork and grew up in Coahoma County.  On the shuttle drive from Clarksdale the route passes through Stovall Plantation where Muddy Waters became a man under the loving care of his grandmother for 25 years before going North and becoming the King of the Chicago Blues, his music leading directly to the birth of Rock & Roll.  When you hear the song I am a Man! that’s Muddy Waters — or Got my Mojo Working or countless other classics.  Muddy’s masterpiece Rolling and Tumbling flows like a metaphoric dreamscape mixing river terminology with the angst of growing up black in the Deep South.  If you paddle all the way to Vicksburg your return shuttle will take you up the blues highway US 61 back north through Muddy’s birthplace Rolling Fork.  Live blues is commonly found being performed throughout the Mississippi Delta, oftentimes in downhome juke joints, rugged social clubs that might look rough on the outside but inside pulse the soul & heart of the Delta Blues.  After all this is the land the blues was born in — and never died.  In Clarksdale alone, live blues can be heard every night of the week Tuesday through Sunday at several different juke joints and clubs.  Blues festivals abound throughout the region.  Check the schedule below.  Paddlers might want to plan their river adventures to coincide with live blues.  Many paddlers who discover this little-known (and entirely unique) paradise of deep blues and deep river wilderness fall to their knees and thank the river gods for their good fortune and return year after year for healthy doses of this doubly cathartic rejuvenation [CLICK HERE: Blues and the River].

Steep narrow concrete ramp.  Sometimes covered with mud & slippery.  Quapaw Landing is usable at all water levels.  Below 0HG the ramp bottoms out but this is still accessible for the paddler.  Around HG 40 the concrete ramp becomes completely submerged — but this is no problem for paddlers who can easily slide their craft directly off the old levee.  During high water the forests surrounding the landing become flooded, the waters spread out and become a clearish-green color as the silt drops out.  Paddlers can push off into the calmed waters of the flooded parking lot from the dry ground of the old levee.

The Old Levee predates the newer levee built in the decade following the Great Flood of 1927 and still protects the fields and hunting camps at Burke’s Point.  Put ins or take outs can be made off the old levee all the way up to flood stage.

As you paddle out of Quapaw Landing and head downstream, left bank descending is a steep muddy cliff carved by the back channel topped by the old levee, cliff swallows are found nesting here in the warmer seasons and beavers sometimes dig their burrows into the mud below root balls.  Approximately 200 yards downstream of Quapaw the old levee was violently broken during the May 2011 flood into a striking landscape of giant free-standing muddy cliff shards, muddy hoo-doos, mud-boulders, and gaping muddy holes, places where the river dove into and then devoured the old levee.  The forest is flattened as if broken over by a tornado and giant piles of logs and driftwood are jammed against one last layer of tall courageous trees behind what used to be the old levee.  Beyond this single wall of trees the rushing water cascaded through and carved out a canyon in the alluvium — a giant blue hole.  If you pull over LBD and climb to the top of the muddy bank and look through this wall of logs you will see a deep hole the size of several Olympic swim pools.  This is a blue hole that was hollowed out during the high water of May 2011.  It seems to be bottomless.  We are yet to see any evidence of its profoundness, even during low water 2011.  The old levee was breached here also during the high waters of 1997 and locals were forced to re-route their access road and re-build the old levee.  Two times in two decades.  It seems as if the river is hungry for this location. 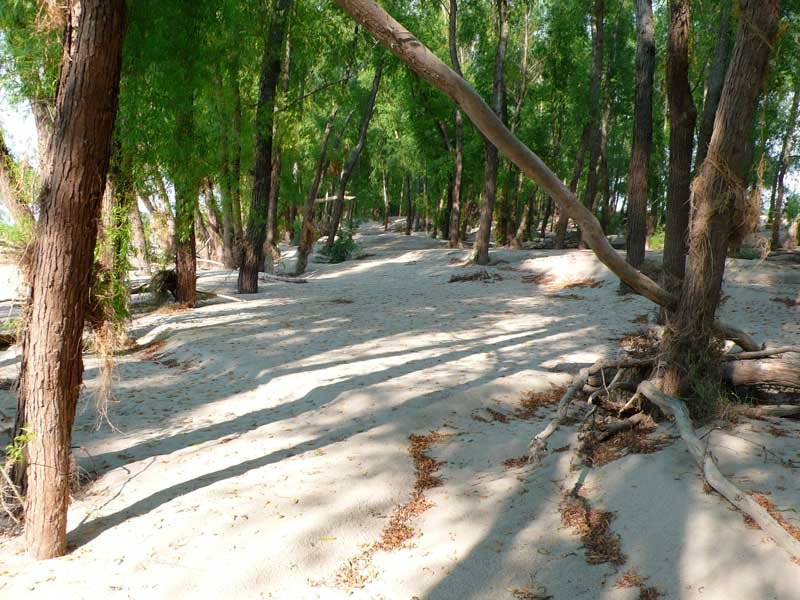 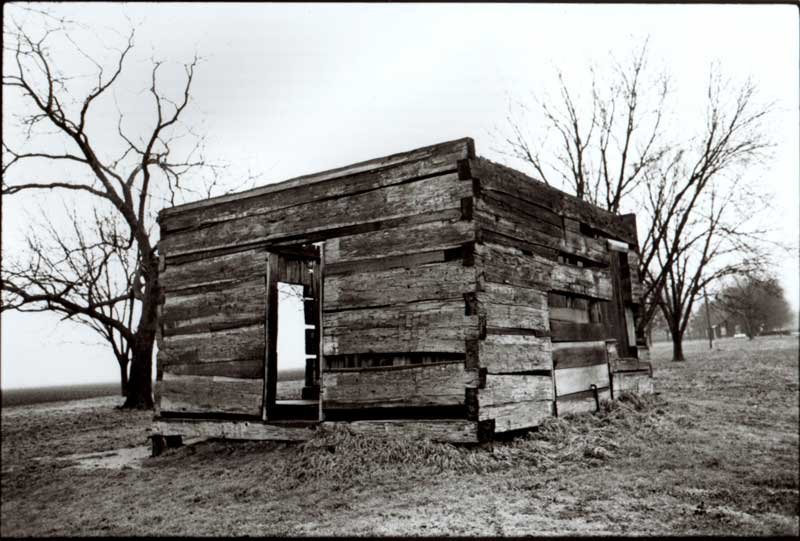 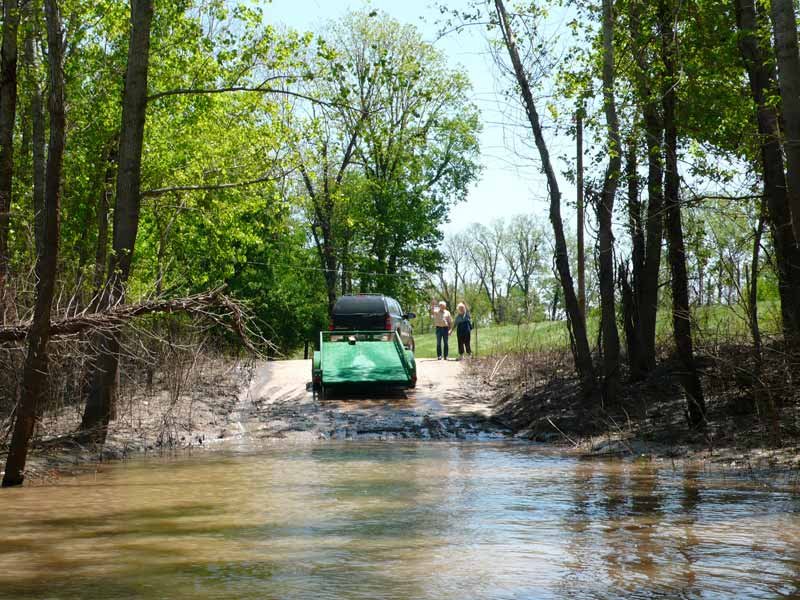 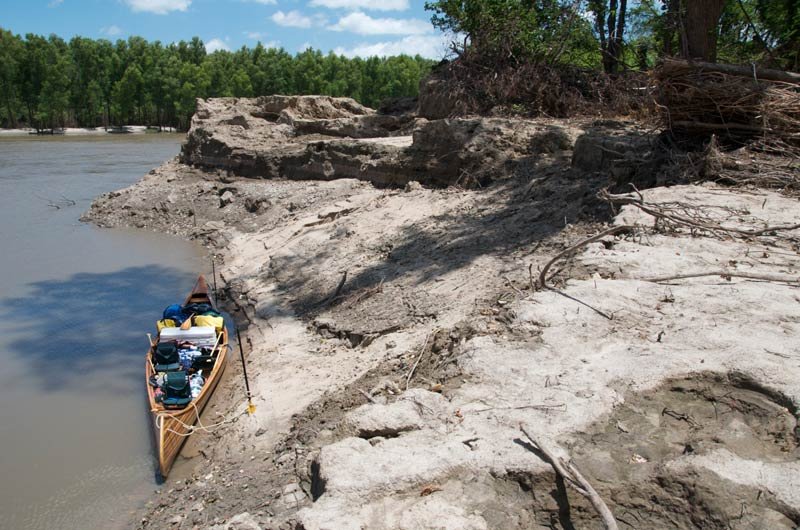