Pass-a-Loutre Wildlife Management Area is located in southern Plaquemines Parish at the mouth of the Mississippi River, approximately 10 miles south of Venice, and is accessible only by boat. The nearest public launches are in Venice. This area is owned by the Louisiana Department of Wildlife and Fisheries and encompasses some 115,000 acres. The area is characterized by river channels with attendant channel banks, natural bayous, and man-made canals which are interspersed with intermediate and fresh marshes. Hurricane damage and subsidence have contributed to a major demise of vegetated marsh areas resulting in formation of large ponds. Habitat development is primarily directed toward diverting sediment-laden waters into open bay systems (i.e., creating delta crevasses), which promotes delta growth. Waterfowl and other migratory game bird hunting, rabbit hunting, and archery hunting for deer are permitted on Pass-a-Loutre. A trapping program is conducted annually to control surplus furbearing animals and alligators. There is excellent fishing in the freshwater areas as well as the more saline waters. Fish species present are typical inland saltwater varieties near the gulf and along river channels. Freshwater species including bass, bream, catfish, crappie, warmouth, drum, and garfish can be caught in the interior marsh ponds. Salt water species include redfish, speckled trout and flounder. Other forms of recreation available include boating, picnicking, nature study, crabbing, and camping. There are multiple campgrounds on the WMA that are available for tent-camping and one designated area for the mooring of recreational houseboats (see maps for locations). Prior to mooring, however, houseboats must receive a permit from the Department. More information can be obtained by calling 337-373-0032. (LA Dept of Wildlife & Fisheries)

If you choose to travel east from Head of Passes down Pass a Loutre and then into Southeast Pass you will be tracing, in reverse, the route many travelers would have taken when first arriving at this new world. Approximately 5 miles down Southeast Pass, some 3 miles from its terminus at the Gulf, on the RBD is Balize Bayou. There is little evidence of civilization here save for the rusted pillars of oil and gas infrastructure left unattended to slowly bleed the delta of its remaining riches. But beginning some 300 years ago, this area was the gateway to this new frontier. Since the French first located the mouth of the Mississippi in 1699 they maintained an outpost at this critical junction. Balize, from the french balise, meaning “seamark” or “beacon,” was a way station for those traveling north up the Mississippi from all corners of the globe. This tenuous wisp of land teetering between the river and the sea was the first refuge for countless travelers venturing into this new land of opportunity as well as the first port of entry for thousands of African slaves that were to build this new colony and burgeoning country.

The first Balize was a meager encampment of French soldiers, slaves and priests on an island within Balize Bayou called the Isle of Tolouse. While hardly a settlement, this isle was the setting for such historic events as the arrival of the Ursuline Nuns to the New World in 1727 and the transfer of Louisiana from France to Spain in 1762. The Spanish briefly moved Balize down the bayou building an encampment known as Fuerte Real Catolica but quickly relocated again up to the mouth of Bayou Balize at Southeast Pass as it had become the primary navigation route for ships entering the Mississippi River by the end of the 18th century. The undeniable importance of controlling the entrance to the Mississippi led the United States to also build a fort here, Fort Wilkinson, shortly after the Louisiana Purchase in 1803. This site, later known as the American Balize was for many years perhaps the most cosmopolitan of settlements anywhere in the Mississippi River Basin. With roughly 500 inhabitants at its peak, Balize was a pilot town for ships entering the Mississippi River and an outpost for fishermen working the salty waters of the Gulf.

The census of 1860 documented the extraordinary diversity of what must have been a community unlike any other in the world. The residents there included river pilots from Denmark, Sweden, England, Wales, Ireland, France, and the states of Maine, Connecticut, Massachusetts, New York, New Jersey, Pennsylvania, Virginia and Louisiana. The community included a cook from the Philippines, schoolmaster from Germany, a lighthouse keeper from Holland, a booker keeper from Norway, an Italian gun shop proprietor, a carpenter from Holland, seamstresses from New York, a Spanish tailor and fishermen from Turkey, Denmark, England, Scotland, Austria, Ireland, Portugal and Sicily.

Sailors, seaman, and surely many drifters and outcasts from around the world came here to the edge of the world, eager to take advantage of the profits from the necessary and treacherous work of maneuvering ships through the sand bars and shallows that lay between the open Gulf and the deep channel of the Mississippi River. The early years of the Balize were described as seedy, lawless and violent. The highly profitable and unregulated piloting industry monopolized by New Orleans businessman along with the relative isolation of the Balize no doubt led to a wild watery frontier town. A report to the Louisiana Legislature in 1846 described:

The Balize prior to 1837 was a mere mudbank, whose natural loathsomeness was made the more intolerable by the beastly scenes enacted there. Riots and broils were daily exhibits and low revelry and debauchery the pastimes of the night. It was a dangerous place to visit. The savageness of man invested the desolation of nature with appalling attributes.

To bring order to this chaos, attempts to regulate and organize river pilotage began as early as 1805. In 1837 the Louisiana Legislature finally took control by implementing a system of pilot examiners to oversee professional qualifications and standards of new pilots who were ultimately appointed directly by the governor. This was the beginning of reform for Mississippi river pilotage and the professional development of the Mississippi Branch pilots. The legislative report from 1846 went on to claim it’s success stating:

‘Order succeeded confusion, soberness of living followed the scenes of riot and debauchery and a village of comfortable and convenient houses has sprung up like bright exhalations.’

However, the Balize struggled for survival its entire existence, it’s buildings connected by boardwalks to combat the constant flooding and less than substantial ground on which it precariously sat. By the time of the Civil War, this original site would have been abandoned, devastated by storms and floods countless times. A new, slightly higher settlement took its place upriver which would eventually evolve into the flourishing Pilot-town of the 20th century just above head of passes. The Mississippi Branch Pilots still maintain a large outpost here despite most all of Pilot-town having been destroyed by Hurricane Katrina in 2005.

Paddling down Southeast Pass to the Gulf is surely a triumphant experience. The end of a journey giving witness to the dissolving of a country into the gaping mouth of the ocean. The salt air, the birds, the fish, the vastness of the sky and the sea as it consumes the marsh is breathtaking but with Balize in mind this history is an exercise in imagination. The very last remnants of the Balize, ancient grave stones sinking into the marsh referenced here in the opening quote, were documented by a state survey of the Pass a Loutre Public shooting grounds and beautifully written about by Meigs O. Frost in 1921 for the New Orleans Item. Even these grave markers have long disappeared, leaving the modern day paddler with no evidence of this extraordinary place. Entombed by silt, devoured by sea, the story itself the only evidence left of the Balize. Though the artifacts of Balize have long been deceased, the history of this place will continue with the hull of each canoe that paddles by echoing the countless vessels that have passed before. The paddler that reaches this point is no doubt a rugged adventurer, an experienced and tested paddler but for the river they are also a sentinel of memory, a vessel in which the stories written by man and erased by the river continue to exist, endlessly adrift in the currents of the Rivergator. (Michael Orr) 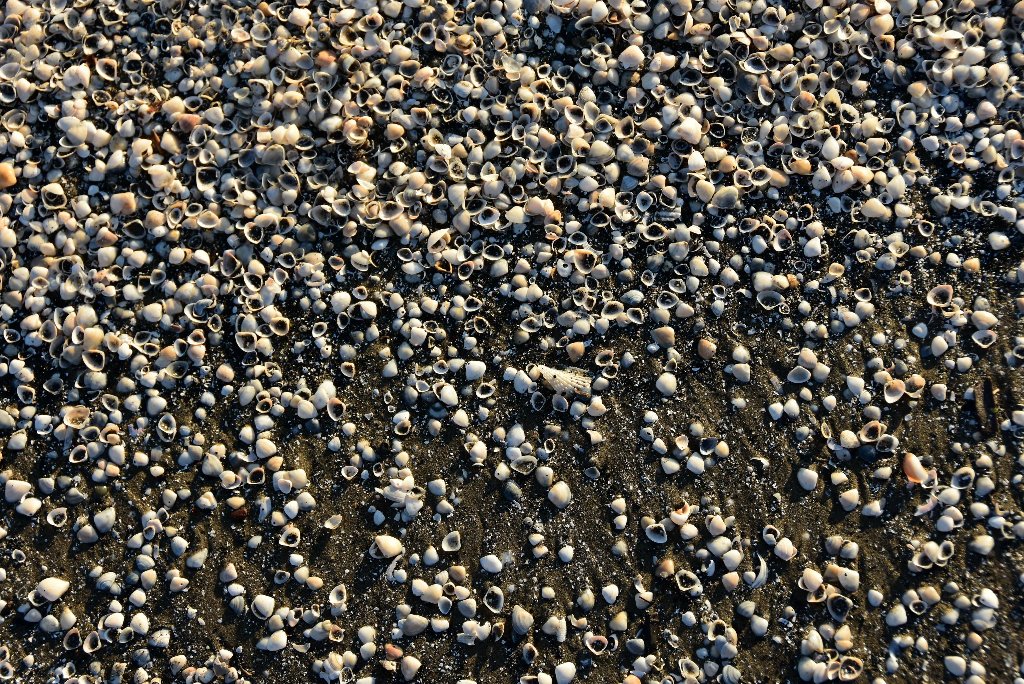 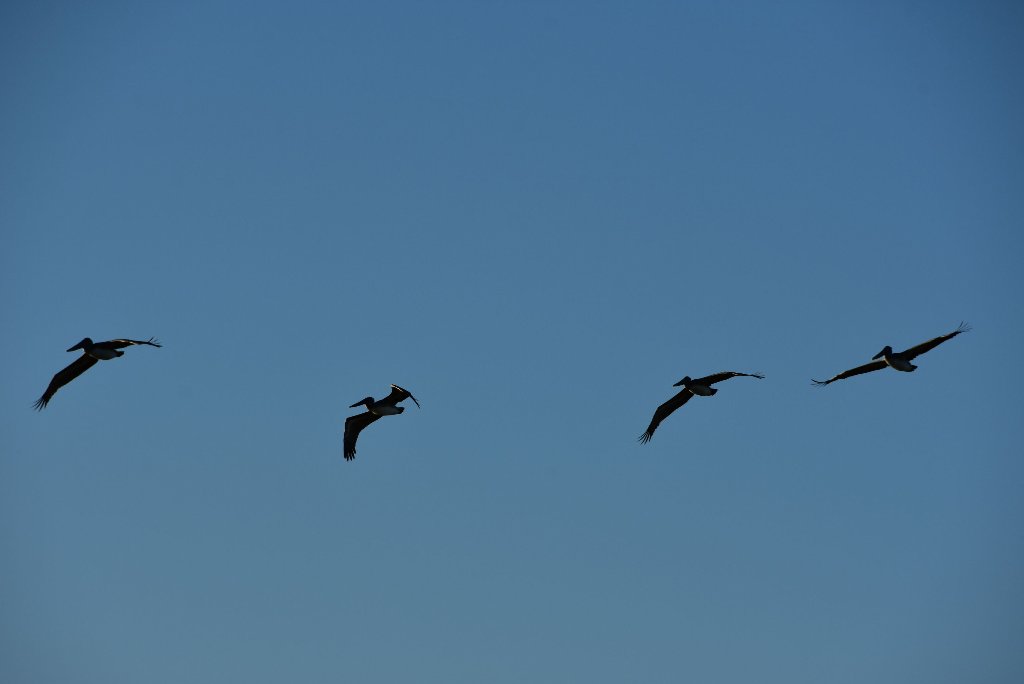 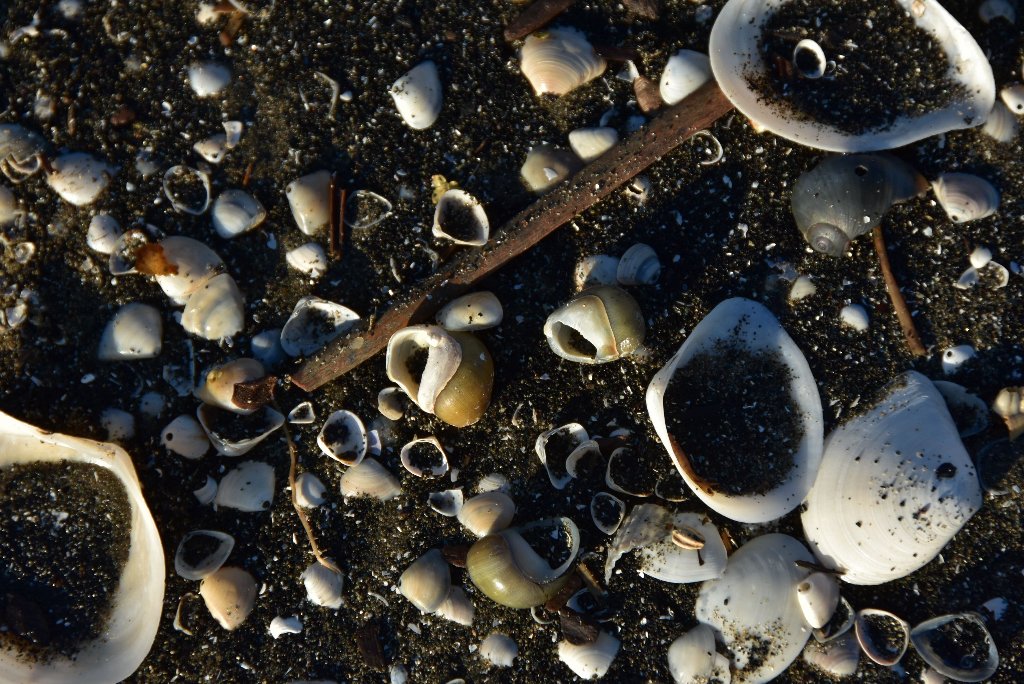 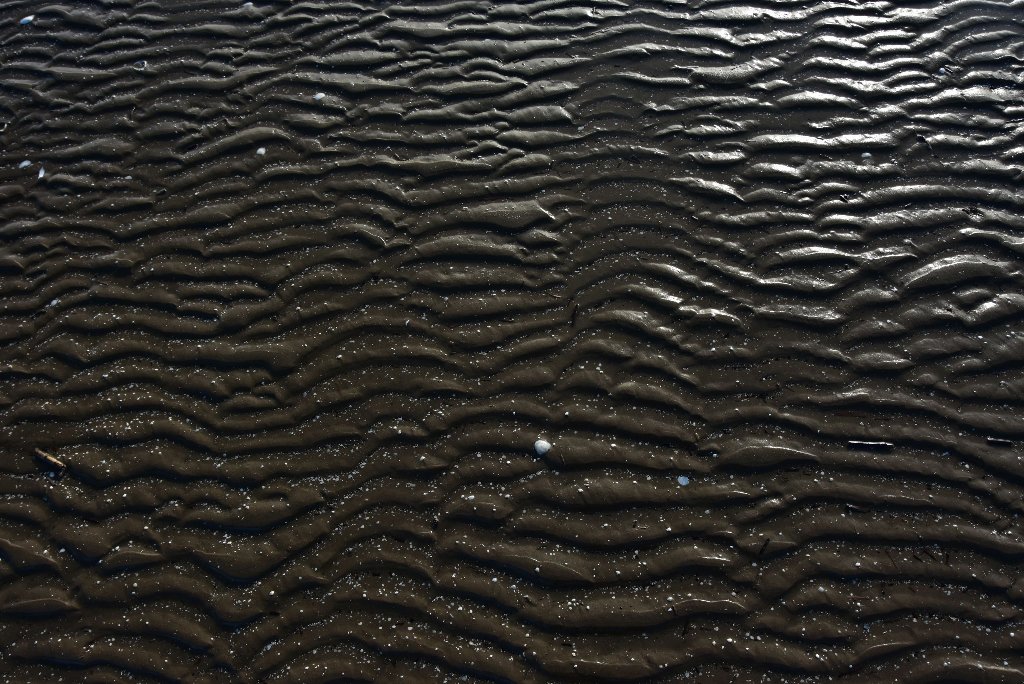 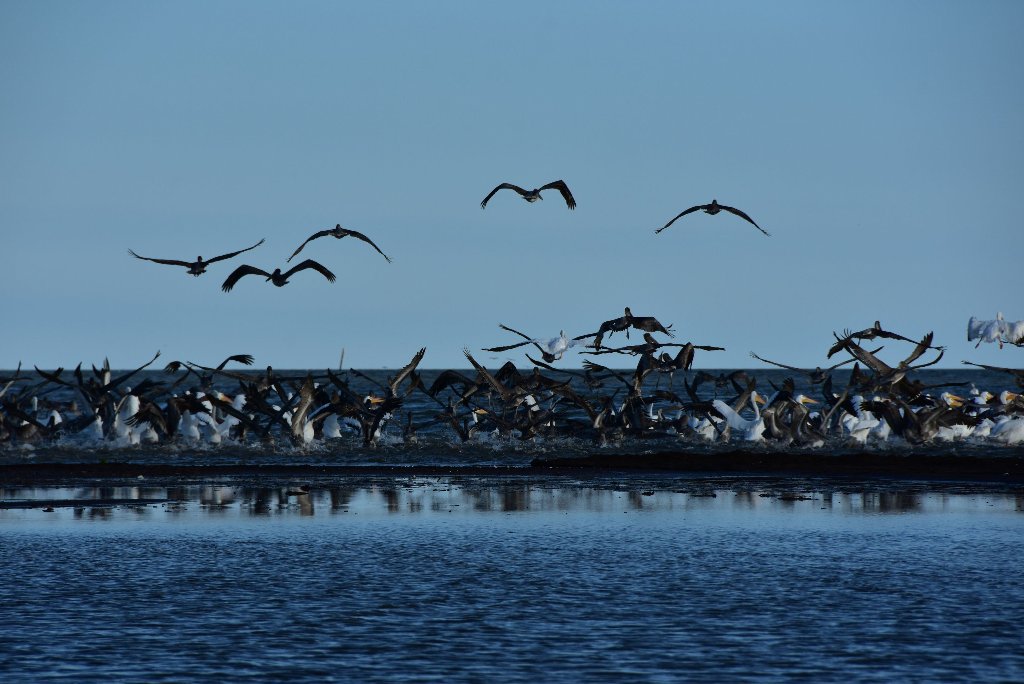 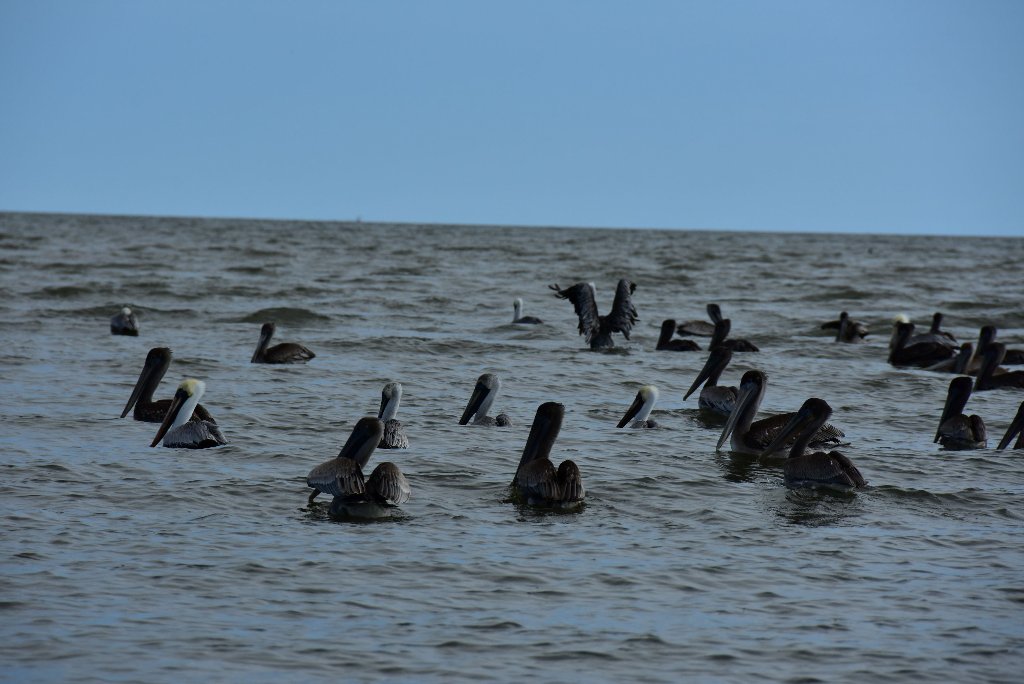 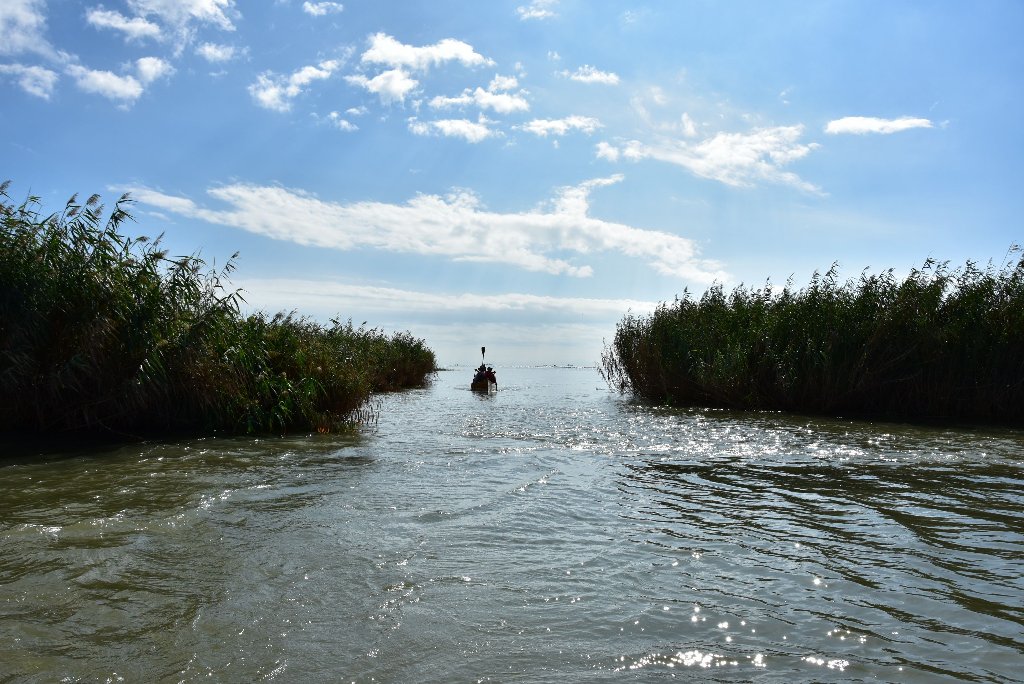 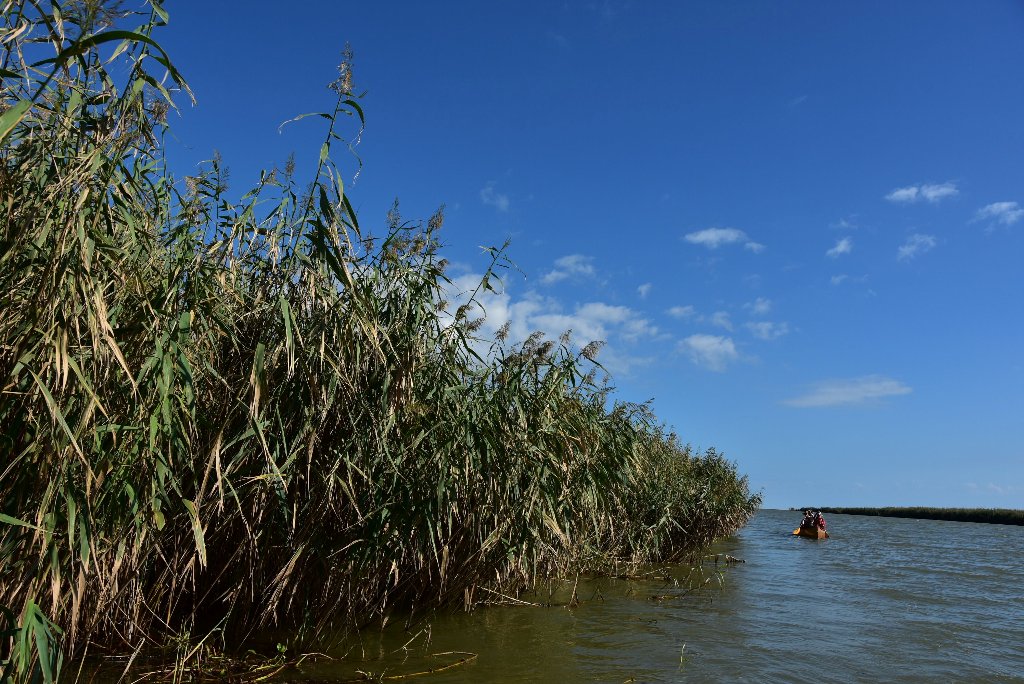 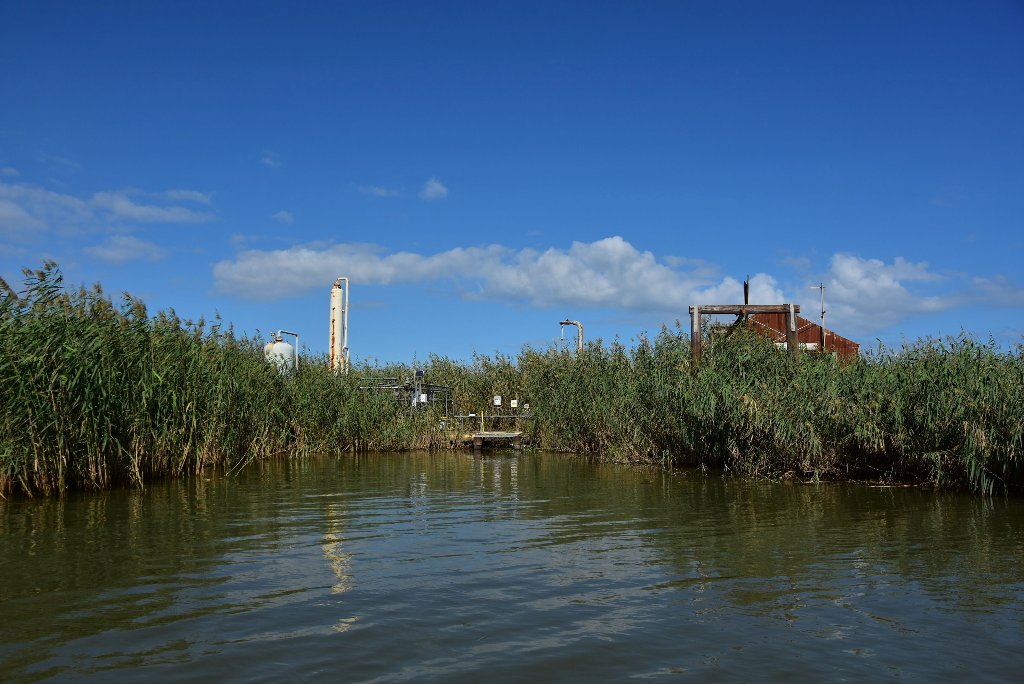 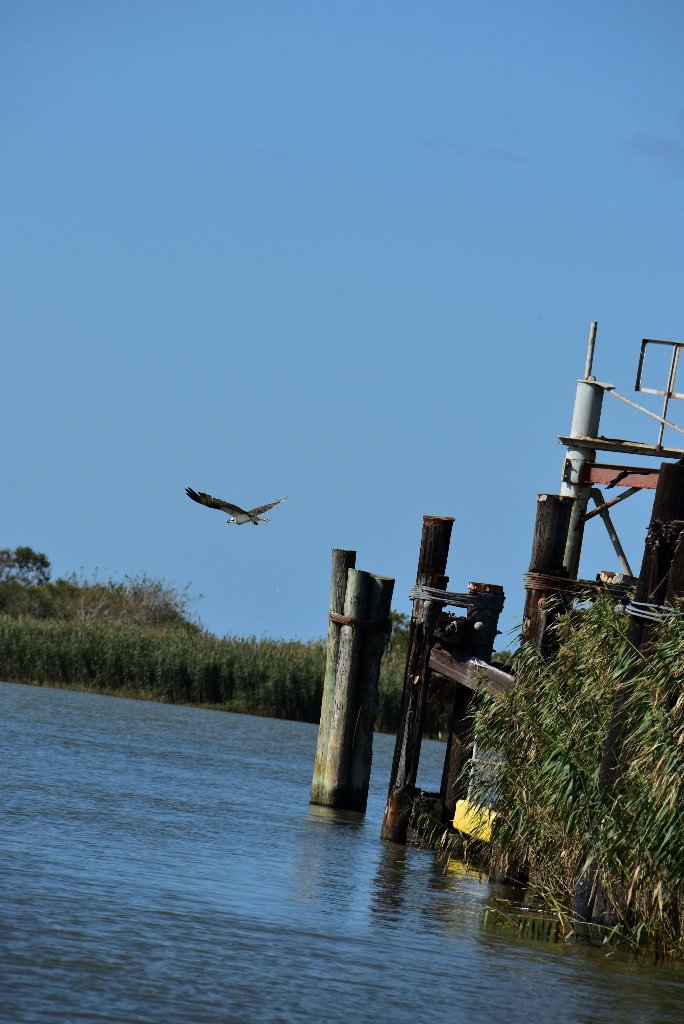 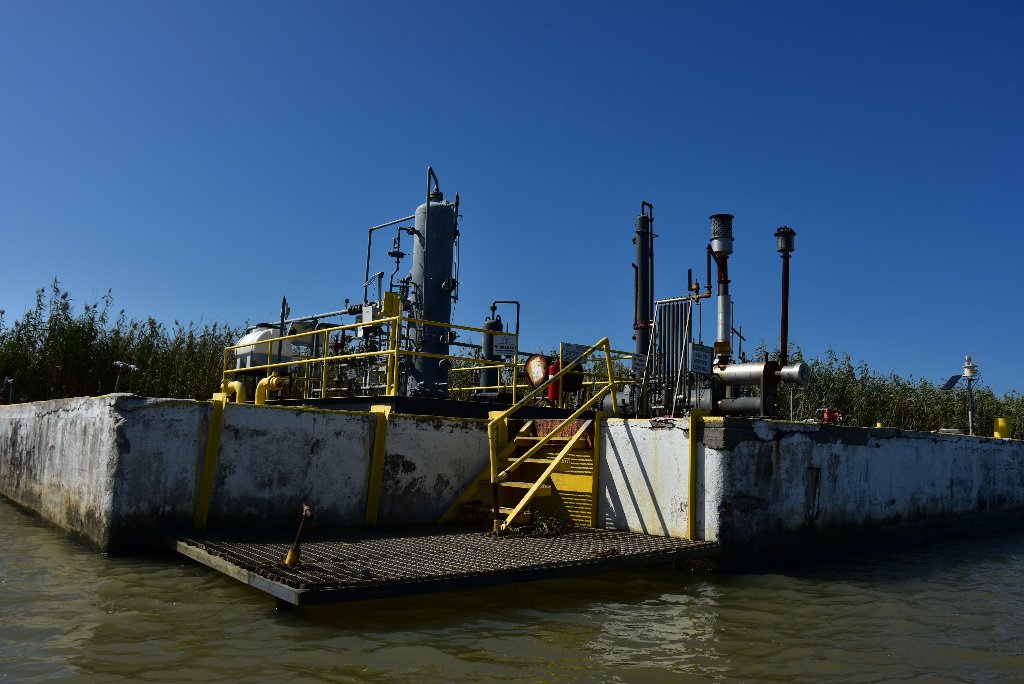 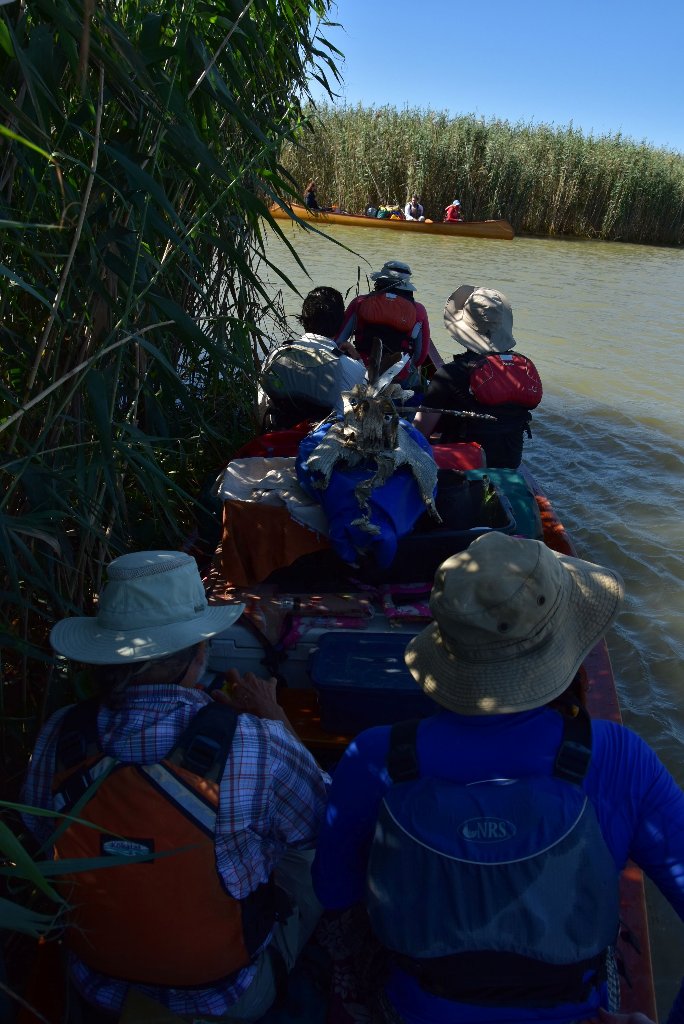 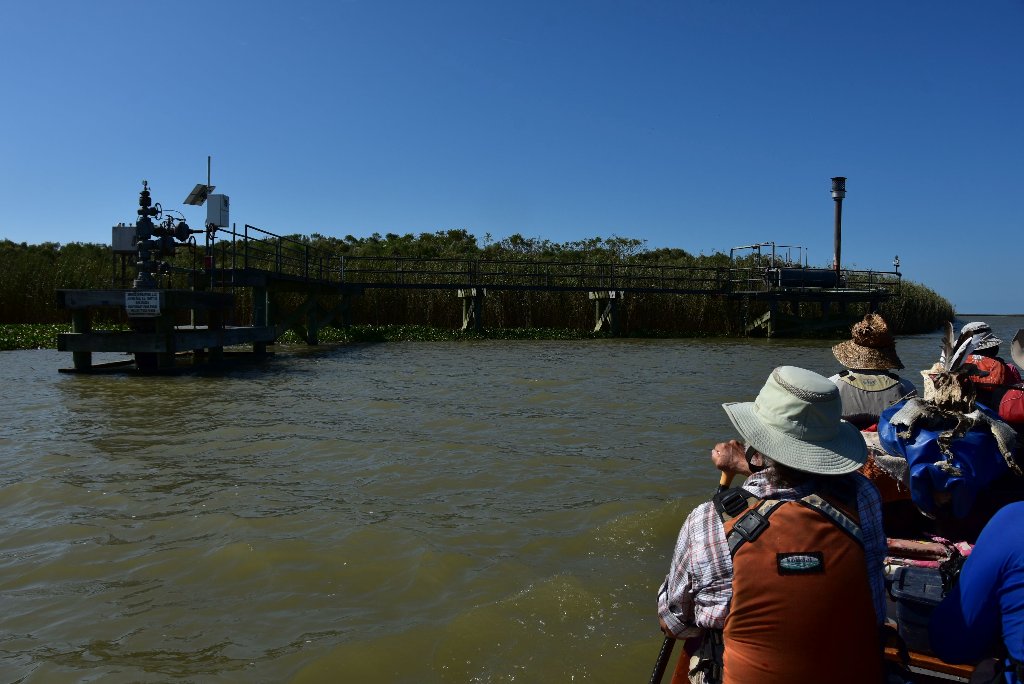 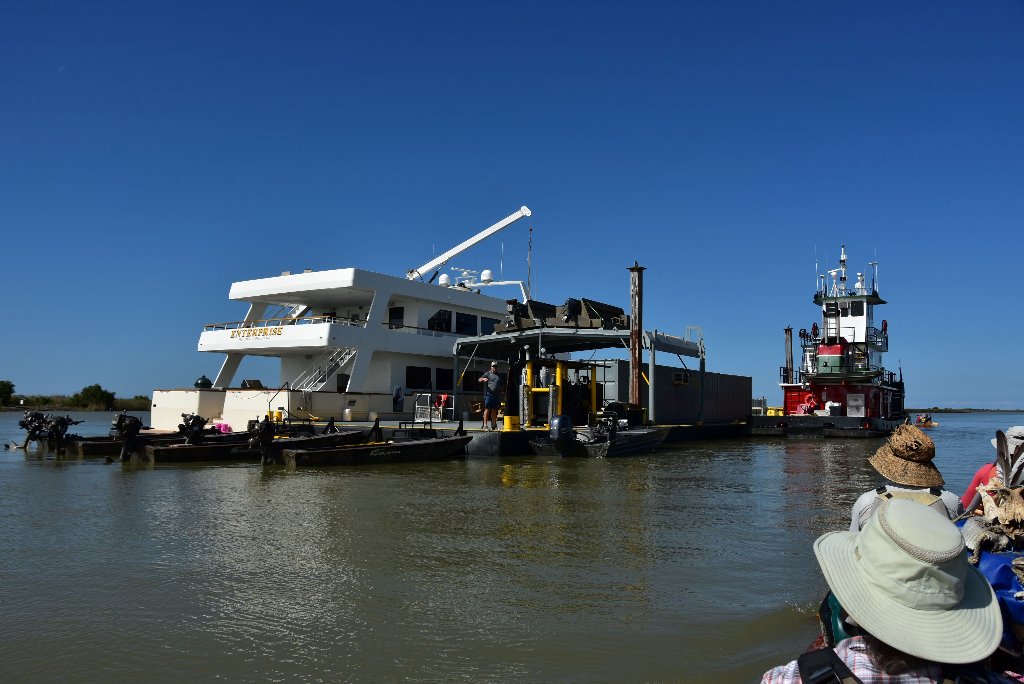 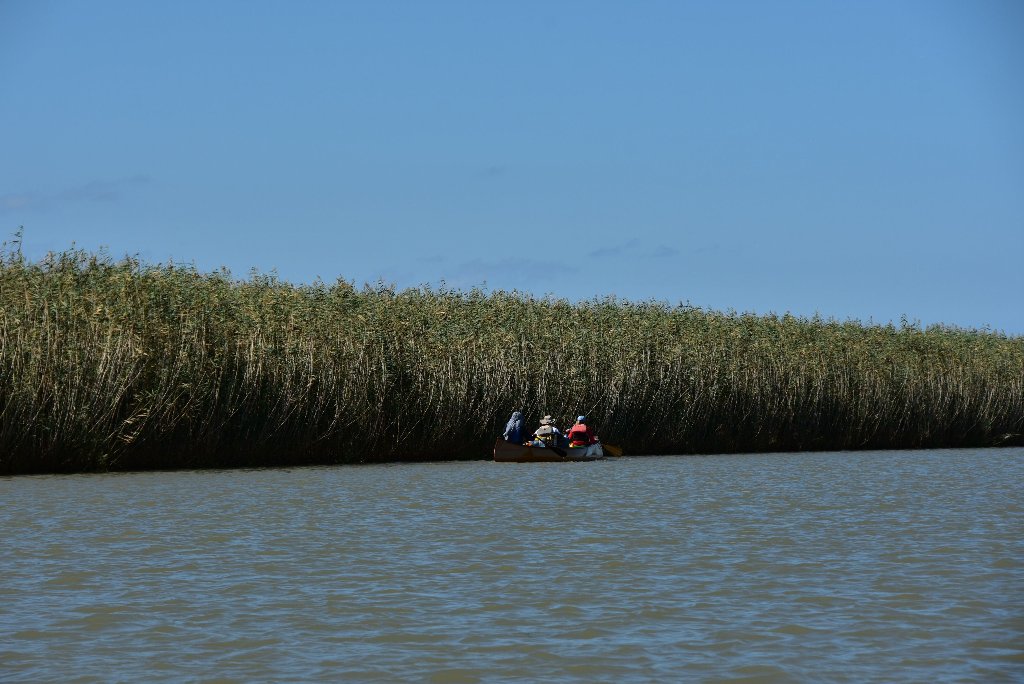 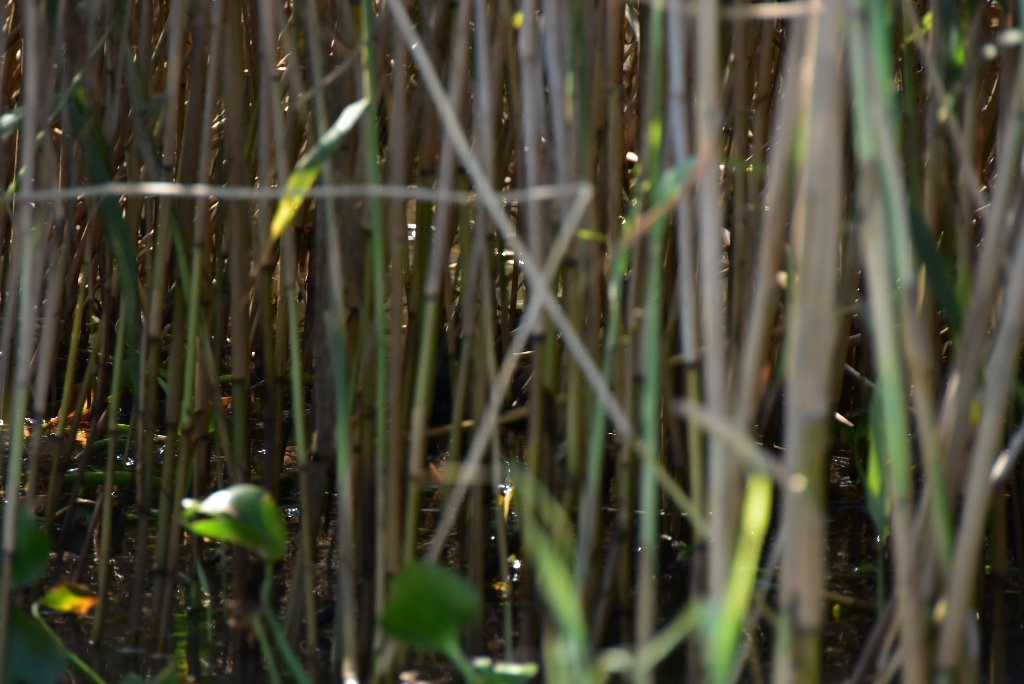 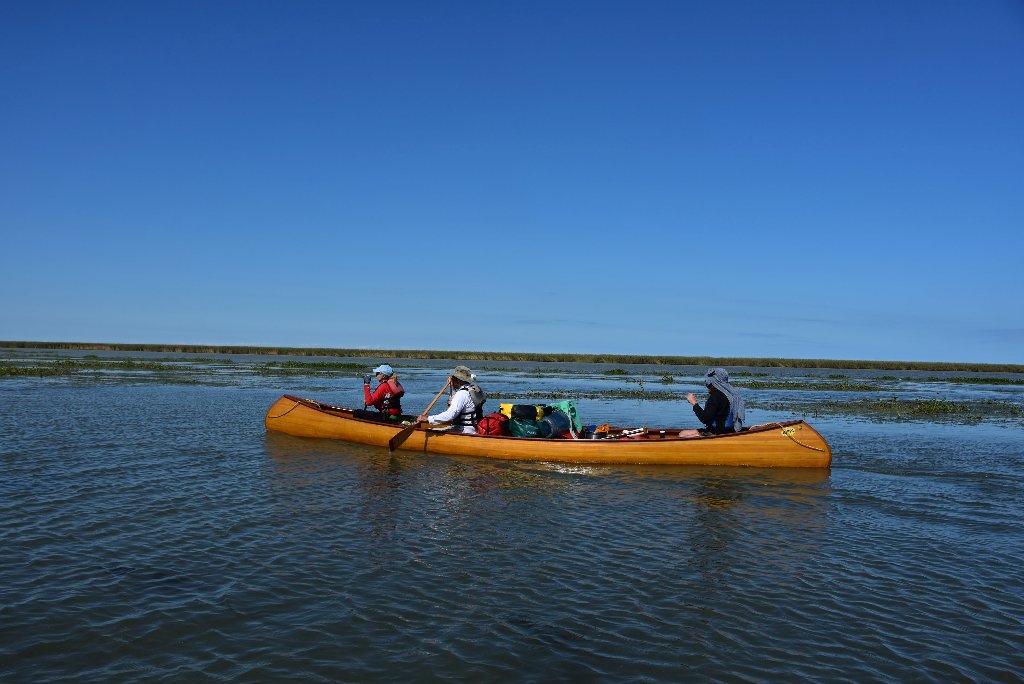 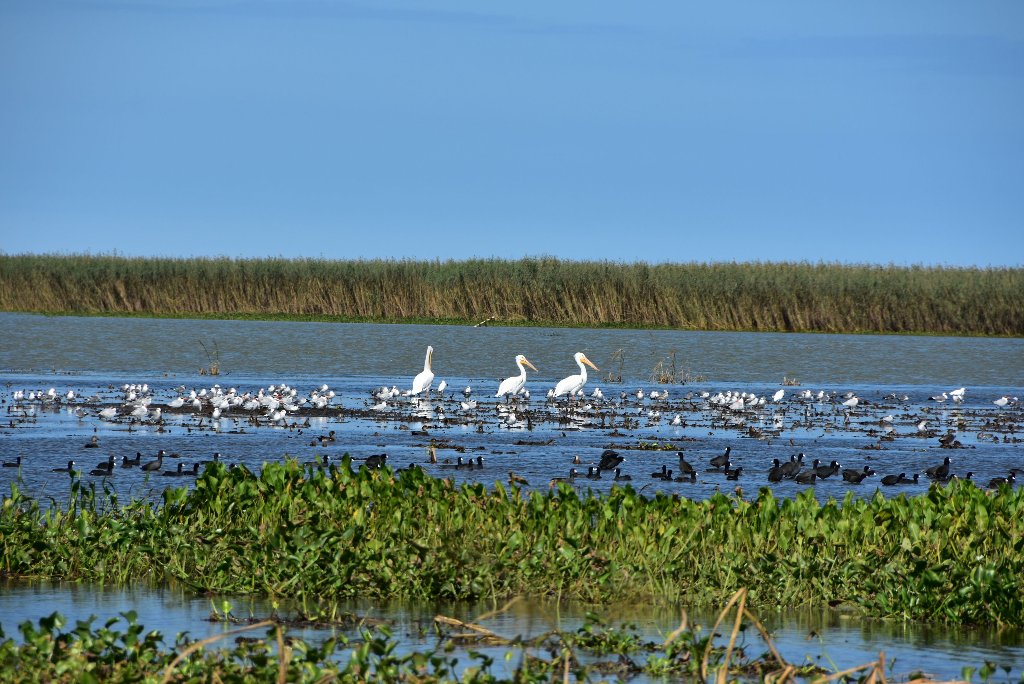 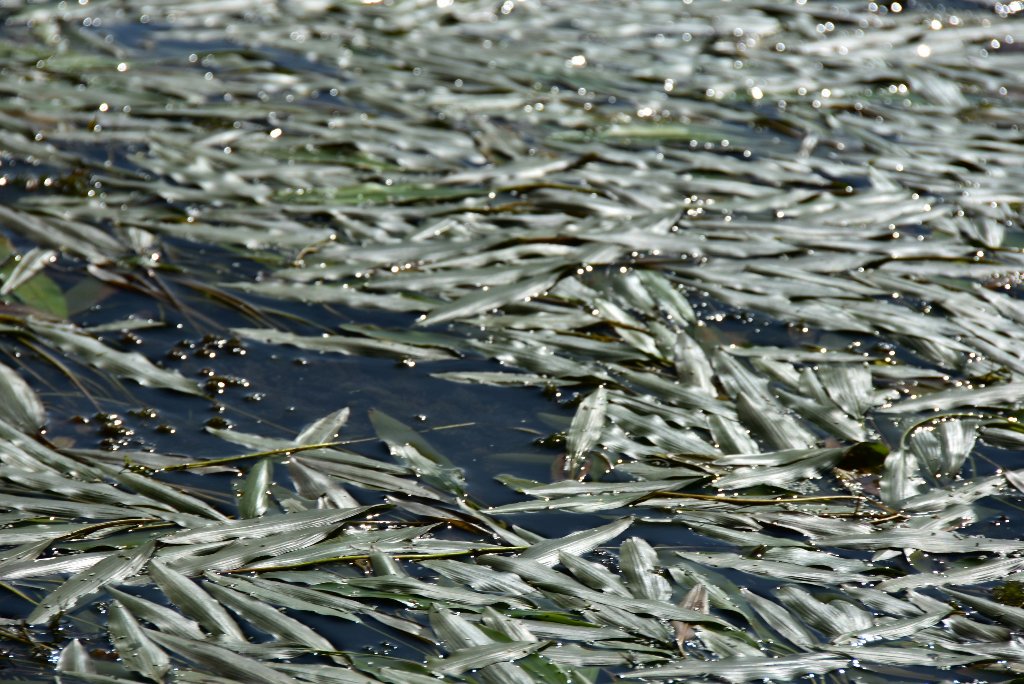