Welcome to the 2015 update to the Rivergator: Paddlers Guide to the Lower Mississippi River.  In this section we will be describing the Atchafalaya River to help paddlers in the exploration and enjoyment of this unique waterway.  The Atchafalaya: the River of Trees.

The Atchafalaya River: Best Route to the Gulf

The 150 mile long Atchafalaya River makes for an enticing alternative for paddlers who want to avoid the heavy industry awaiting them below Baton Rouge.  Imagine paddling down the richest and largest river swamp in North America as opposed to paddling down the busiest and largest inland port in the world!   Unless you are dead-set committed to the traditional Mississippi route, most paddlers would do best to take the Atchafalaya route.  Paddlers can enter the Atchafalaya Canal right bank descending above Shreve’s Bar at mile 304 through the Old River Lock and Dam.  The Atchafalaya is a distributary of the Mississippi and Red Rivers.  One third of the average daily flow of the Mississippi passes down the Atchafalaya, which makes it the shortest big river in America.  At nearly one-million acres, the Atchafalaya Basin is North America’s largest riverine swamp. It contains monstrous ecosystems of marshland, bottomland forests, lakes, bayous, and estuaries. The Atchafalaya (Native American for Long River) offers a baseline for big river health and ecosystem vitality.  The Atchafalaya Basin is a key estuary for nesting, breeding, and migration of 250 bird species, 60 species of reptiles & amphibians, and it is also the life-support system for close to 100 species of fish. One of the most profound aspects of the Atchafalaya River is its ability to improve water quality as the river runs its course to the Gulf.  (Its muddy deltas are examples of how the Mississippi River should be working below New Orleans, but isn’t because the Mississippi River water is not allowed to filter through the brackish wetlands, having been cut off by levees and canals) The disappearing coast of Louisiana is being saved along one of the Atchafalaya distributaries, called Wax Lake.  The Wax Lake channel is creating a totally new delta as the sediments of a nation fall out of the muddy flow and congeal to form fresh land.

Traffic and Industry on the Atchafalaya

Industry and commercial traffic is much quieter on the Atchafalaya than the Mississippi.  You will be able to enjoy long stretches of paddling without having to negotiate turns with big tows bearing down on you and causing big waves behind them.  Your campsites will be much more peaceful.  You will almost never be awoken by the bright lights of passing tows, or rumbled in your sleep by their throbbing engines.  However, there is one place you will encounter heavy traffic, and will need to be especially cautious and alert, and that is paddling through the Port of Morgan City.   The good news is that it’s short.  iIn fact, you will only have to paddle through heavy traffic and industry for five miles, from 119 to 124.

The Rivergator is for your free use!  Please print or access from your smart phone.  (Presented here in roughly 100 miles sections from St. Louis to the Gulf of Mexico).

Best case scenario: 1) print up section of Rivergator that you will be canoeing or kayaking.  2) Print up accompanying USACE river maps.  3) Print up NOAA River Stage Forecasts the day before you embark on your adventure for latest readings and forecast.  4) Lastly, listen to and print the latest weather forecast.

Secure the above by inserting pages into 8.5×11 page protectors and bundle into a 3-ring notebook or waterproof map casing which are available at most water outfitters such as The BackPacker or Massey’s Professional Outfitters (Baton Rouge), Pack & Paddle Outfitters (Lafayette) or online at REI or NRS.

If using smart phone protect with water-proof casing!  The river is hungry for electronic devices and equipment that doesn’t float!  (I have personally left several marine radios, a half dozen knives and one camera with the sturgeon and catfish at the bottom of the river!)

Who is the Rivergator written for?

The Rivergator is written by paddlers for paddlers. It will open the river for local experienced canoeists who have always wanted to paddle the Mississippi but didn’t know how or when or where to start.  Canoe clubs, kayak clubs and outdoor clubs.  Outdoor leadership schools.  Friends and families.  Church groups and youth groups.  It could be used by the Girl Scouts for a week-long summer expedition to Tunica, or a group of Boy Scouts working on their canoe badge in the Memphis area — or a group of KIPP middle schoolers from Helena who want to get on the river at the mouth of the St. Francis for an easy daytrip.  Paddlers seek out new places to explore.  You could read the Rivergator during the winter months from your home and by spring snowmelt you could be making your first paddle strokes on a life-changing adventure down the Mississippi!   Rivergator will help you get there if you’re a long-distance canoeist who started at Lake Itasca, or a kayaker who is coming through south after paddling the length of the Missouri River from Montana’s Bitterroot Mountains.  You could be a stand-up-paddleboarder who put in at the Great River Confluence of the Upper Mississippi and Big Muddy Missouri in St. Louis.

Us paddlers are all the same: canoeists, kayakers, stand-up-paddleboarders, rafters.  We look for the same kinds of currents on the river, and enjoy the same kinds of remote islands.  We are slow, but efficient.  We know the river better than any other river pilots, at least the pieces of river we have paddled on.  We have more in common with towboats than motorboats.  Regardless of what you paddle, the Rivergator will you help you find the essential landings and the obscure back channels that you would otherwise miss.  It will help you safely paddle around towboats, and choose the best line of travel to follow around the head-turning bends and intimidating dikes, wing dams, and other rock structures.  It will identify which islands to camp and which to avoid, and where the best picnic spots are found and where blue holes form.  It will lead you to places of prolific wildlife and mind-blowing beauty. It will help explain some of the mysterious motions of the biggest river in North America.  It’s written for canoeists and kayakers, but is readable enough to be enjoyed by any arm-chair adventurers including landowners, hunters, fishermen, communities along the route, historians, biologists, geologists, and other river-lovers.  The river is the key to understanding the history, the geography and the culture of the Mid-South.  It’s the first high speed “router.”  It connected our ancestors much like internet does today.   It’s the original American highway, migration route, freight route, newspaper route, and trade route.  But it’s also a church, a sanctuary, a playground, a classroom.  The river is the rock star, The Rivergator is merely a guide to help you interpret and enjoy the songs of the river!

The Rivergator reads like a big river expedition, starting above St. Louis at the confluence of the Missouri and following the Middle and then Lower Mississippi downstream mile-by-mile.  The descriptions are factual and the information is the most up-to-date available, but I have tried to enliven the writing with “the feel” whenever possible.  Each piece is titled with headings in bold that include 1) the name of the important features along the way, 2) which side of the river it’s on, and 3) its mileage.   For example, “LBD Mile 736 Memphis, Tennessee, Mud Island Harbor.”  736 is the mileage above the head of passes near the Gulf of Mexico.  RBD=right bank descending and LBD=left bank descending.  Paddlers are offered many route choices beyond the main channel in the plethora of sluices, back channels, secret passages, and tributaries along the way, using Google maps for illustration.  On your laptop or home computer you could open two pages, one for the text and one for Google maps.  On the river you can switch back and forth on your smart phone.  Or you can print the text and use the US Army Corps Lower Mississippi Maps hard copy or online.  The Rivergator is three guides wrapped up into one, because every island, landing and riverbank has to be described in three different water levels, low, medium and high.  It provides paddling routes, as well as history, geography and culture.  The Mississippi fluctuates 40-50 vertical feet in any given year, with enormous changes as result, whole islands disappear in high water, while some good landings become fields of mud at low water. 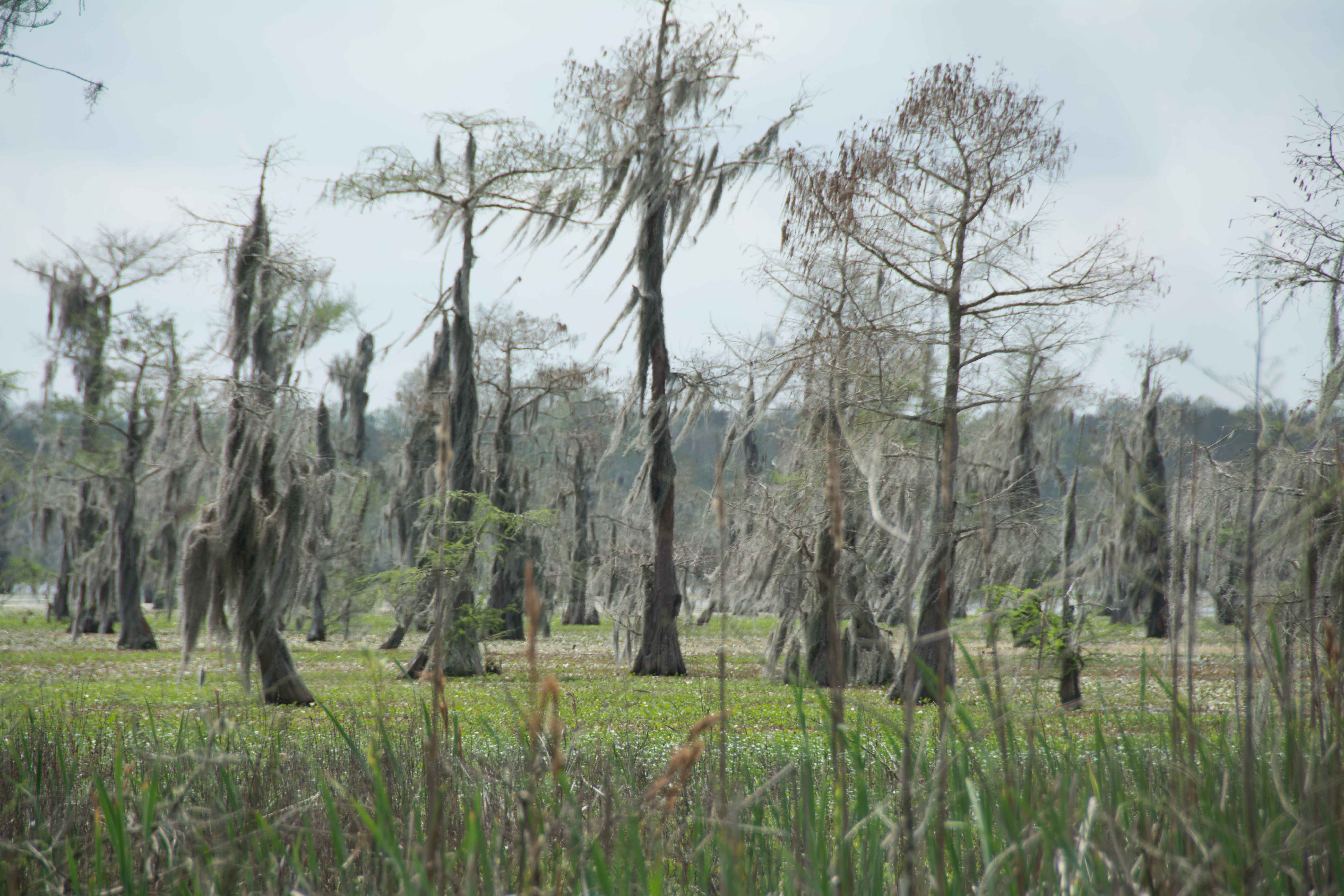 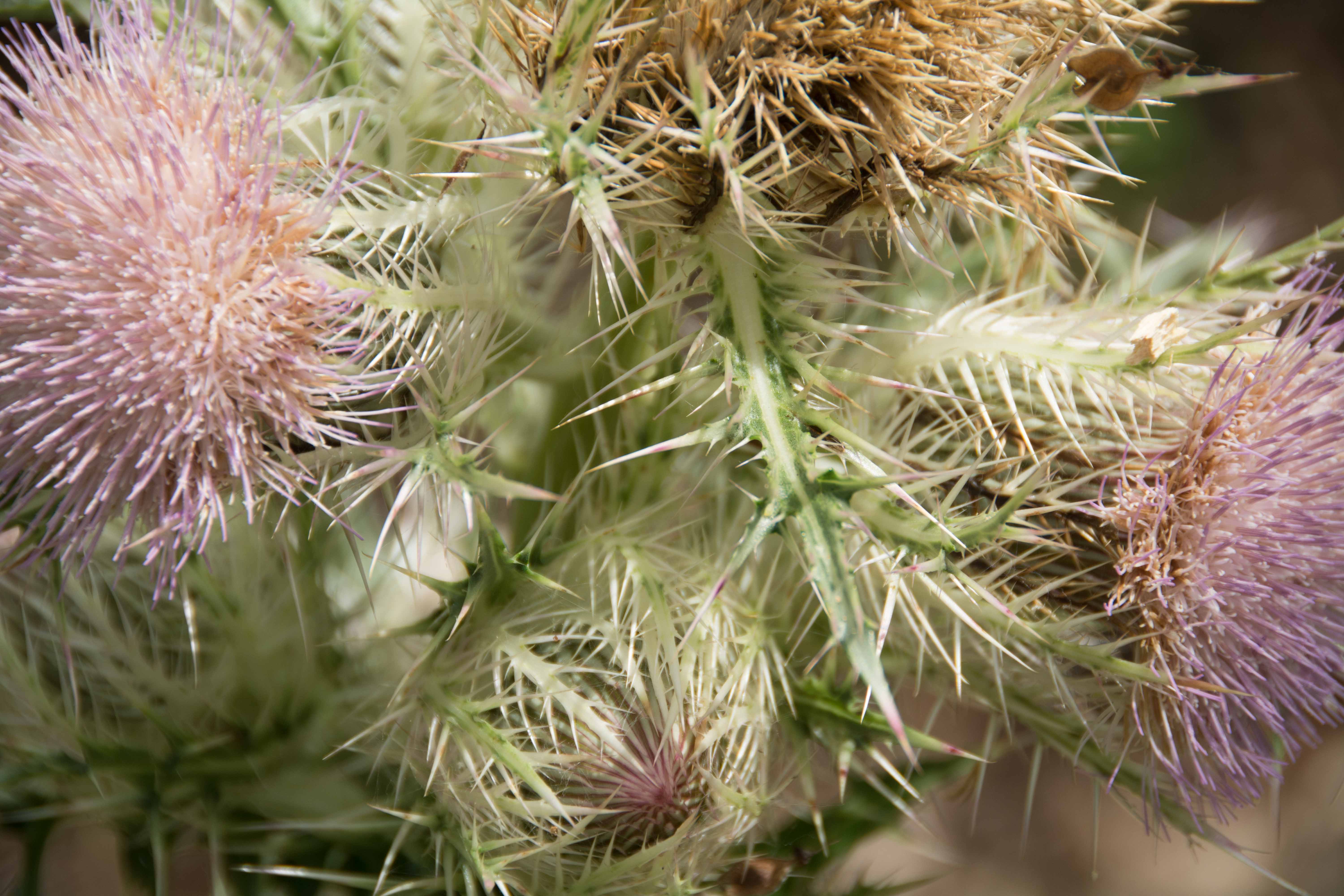 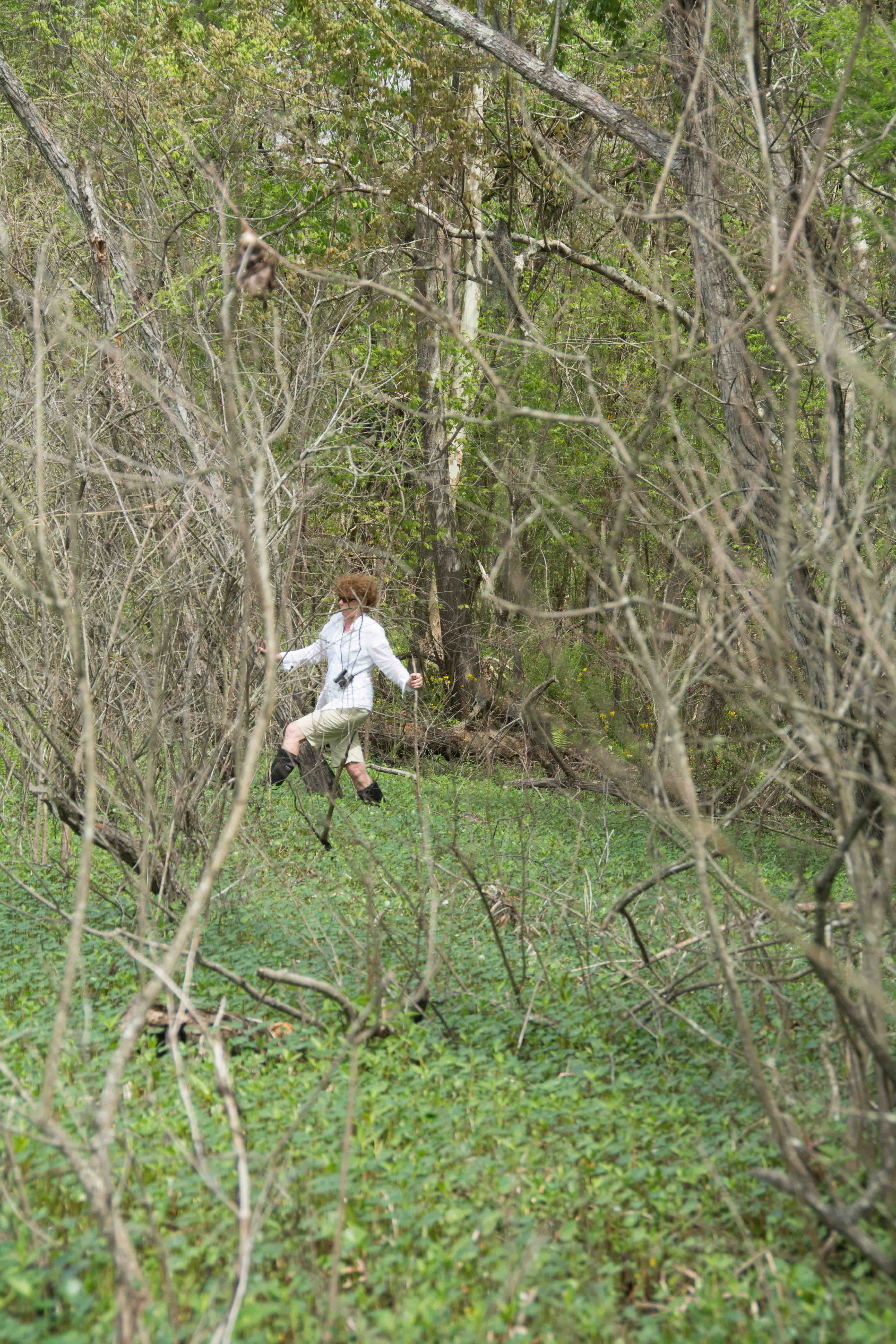 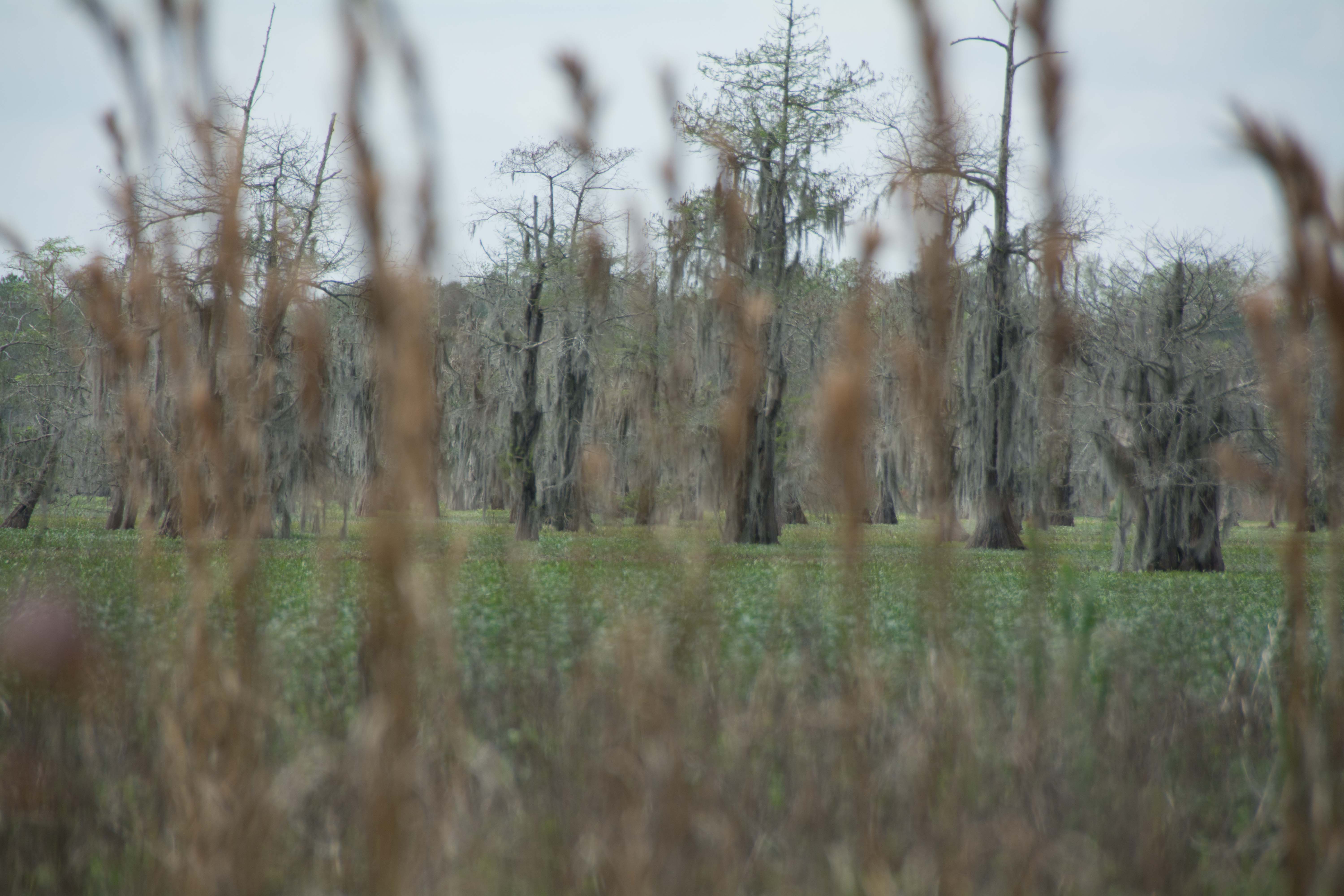 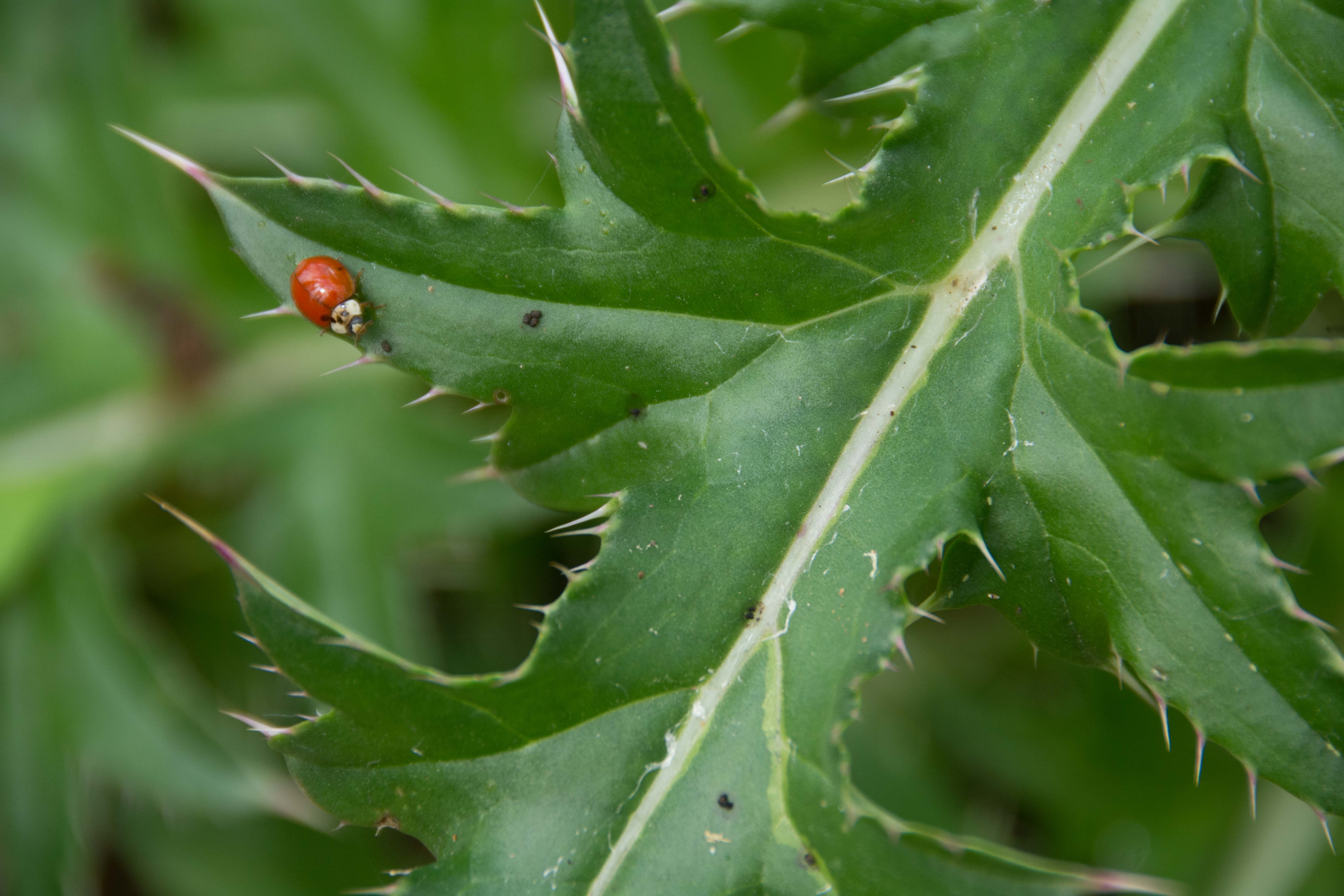 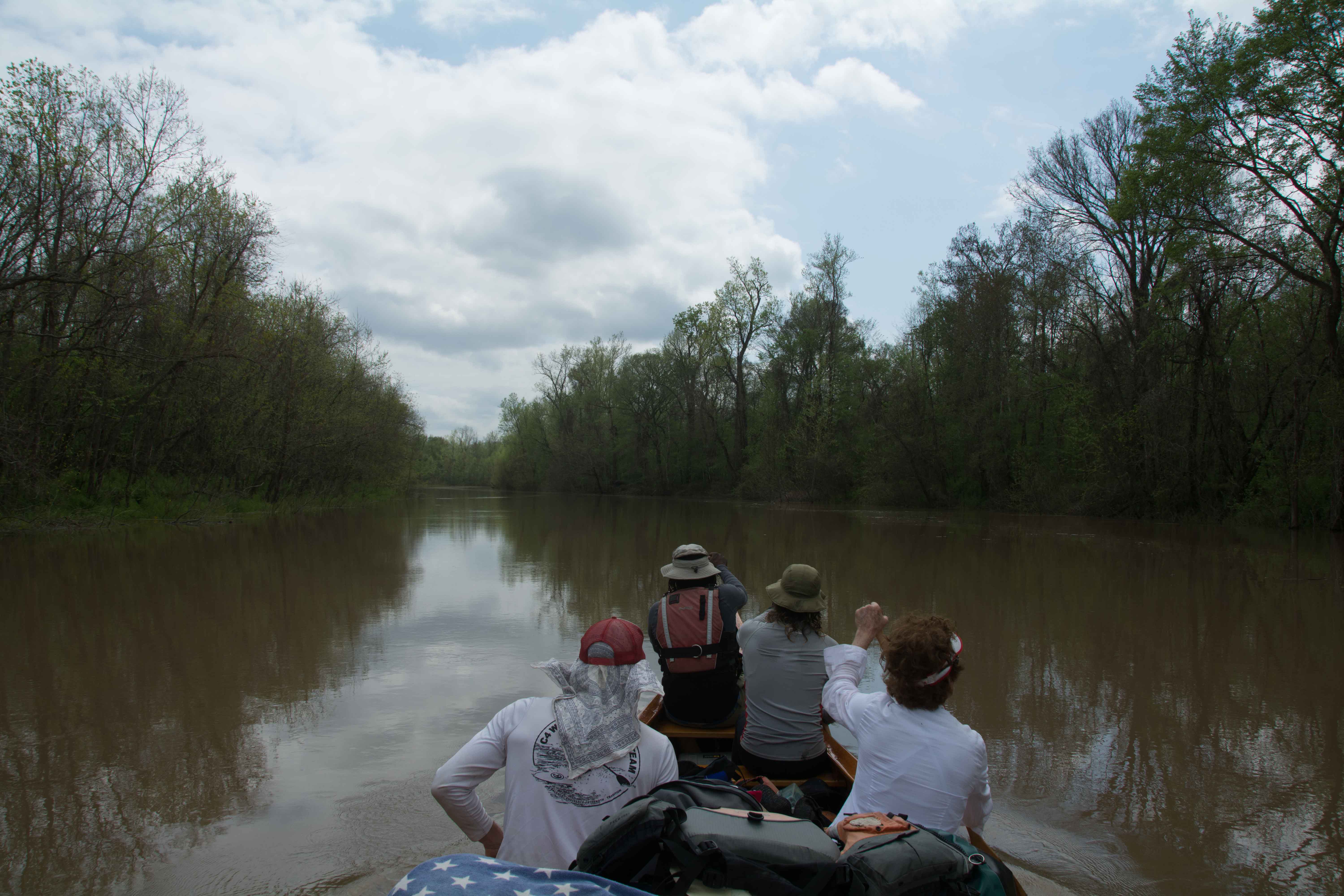 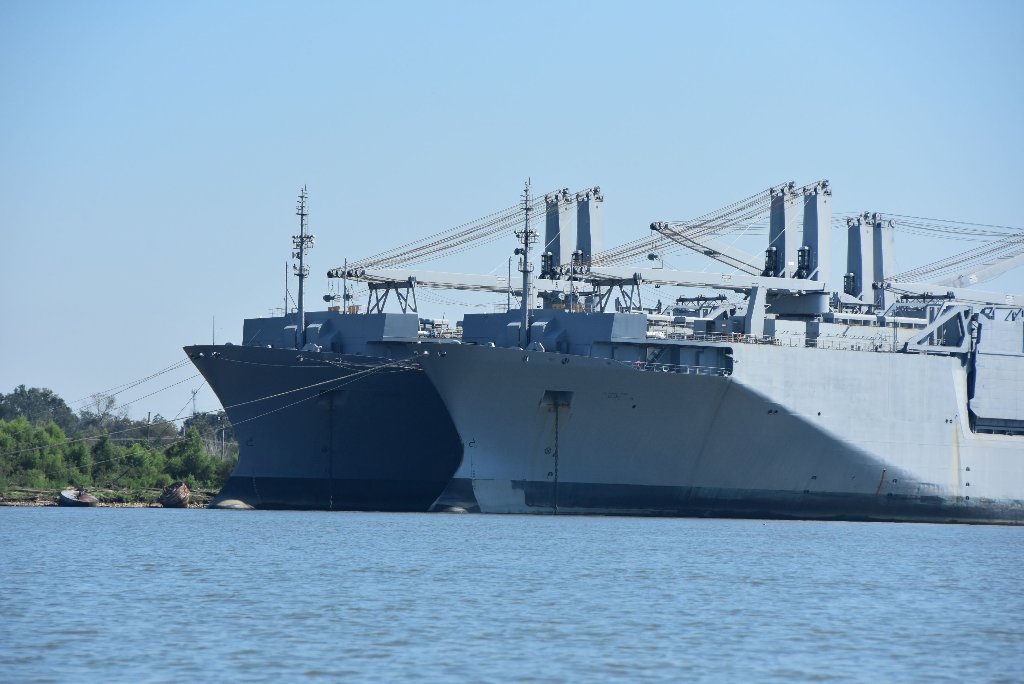 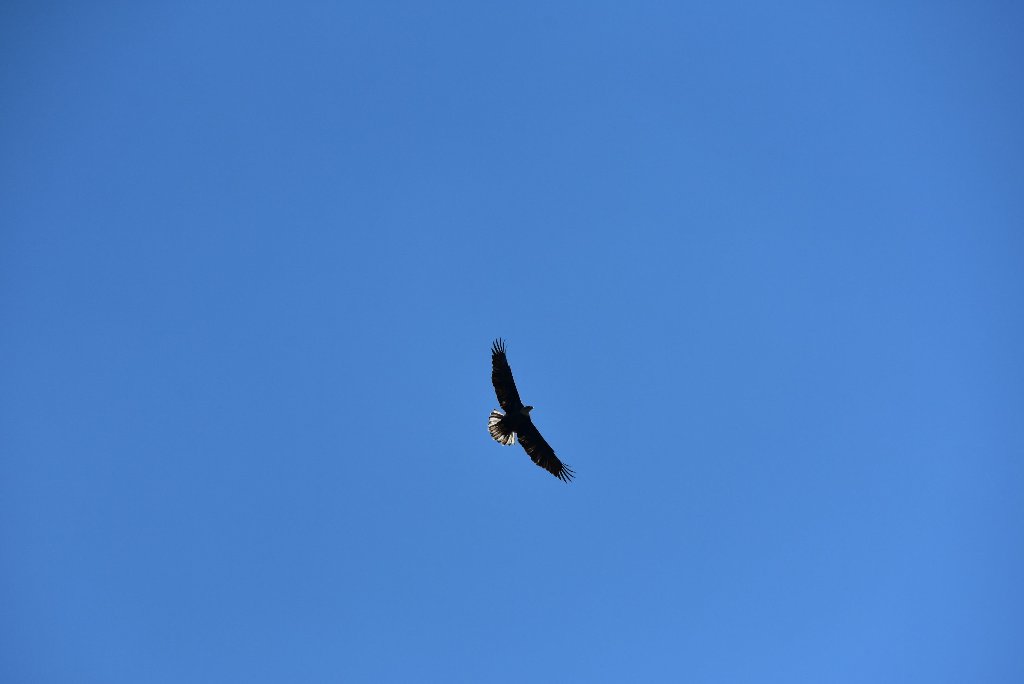 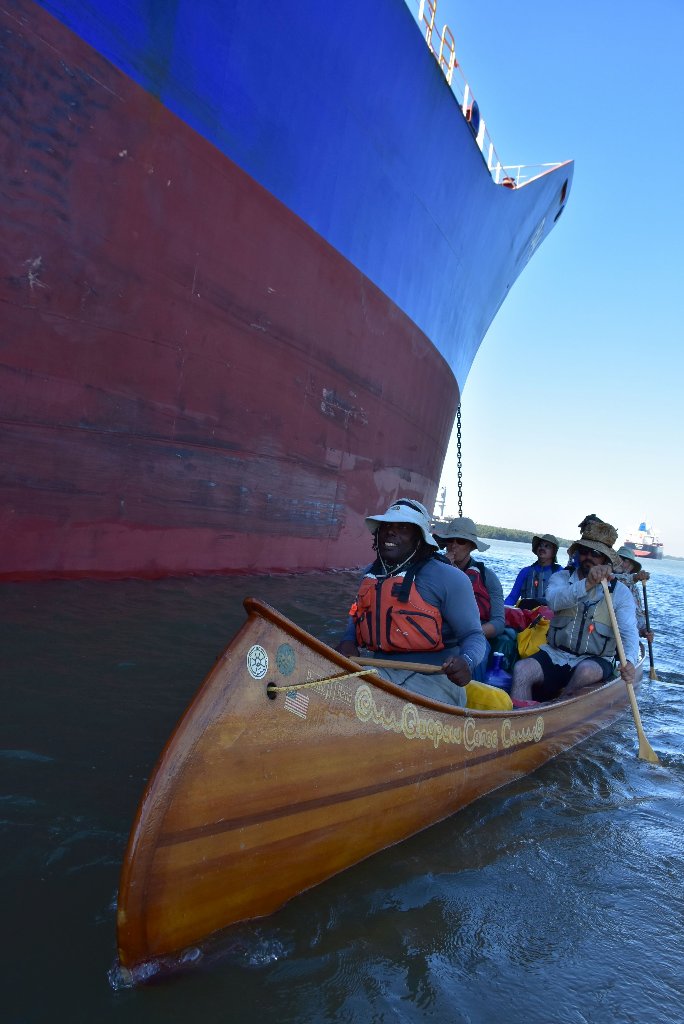 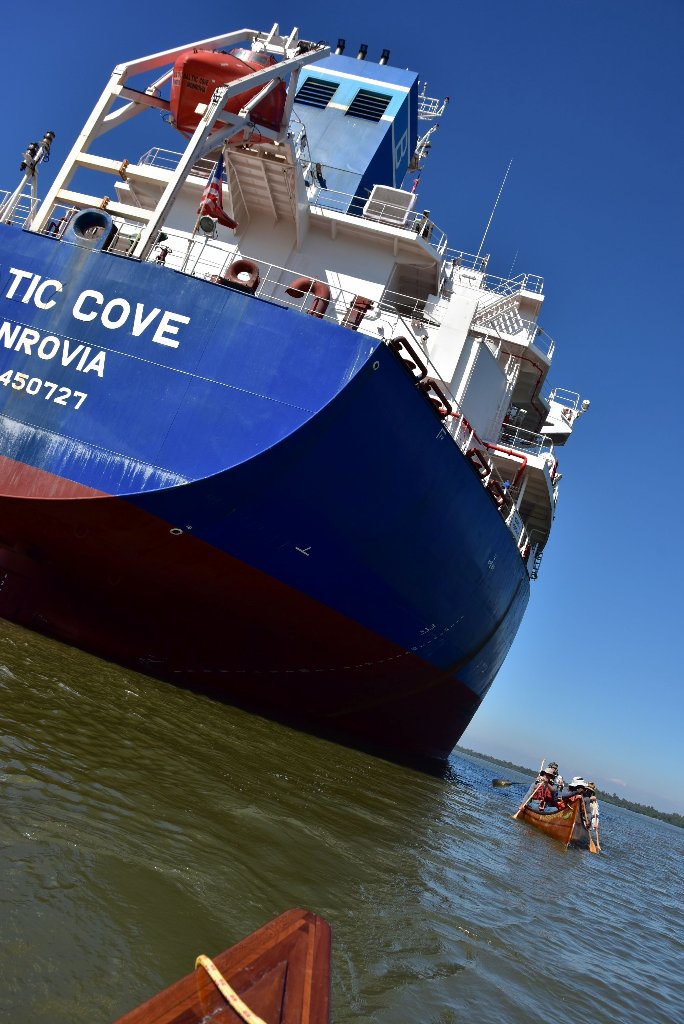 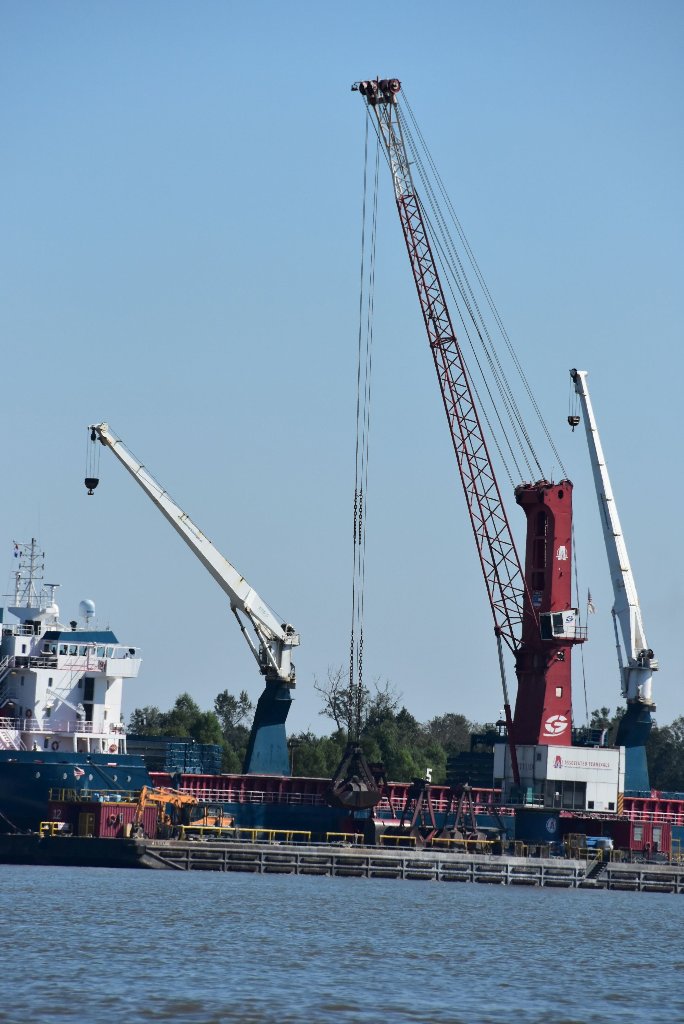 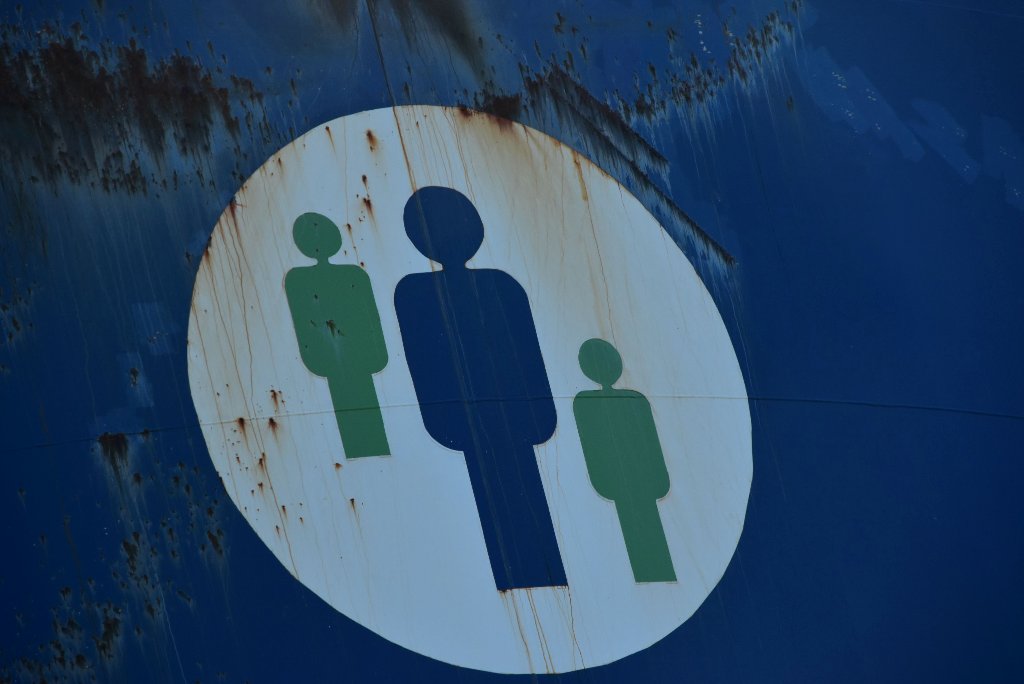 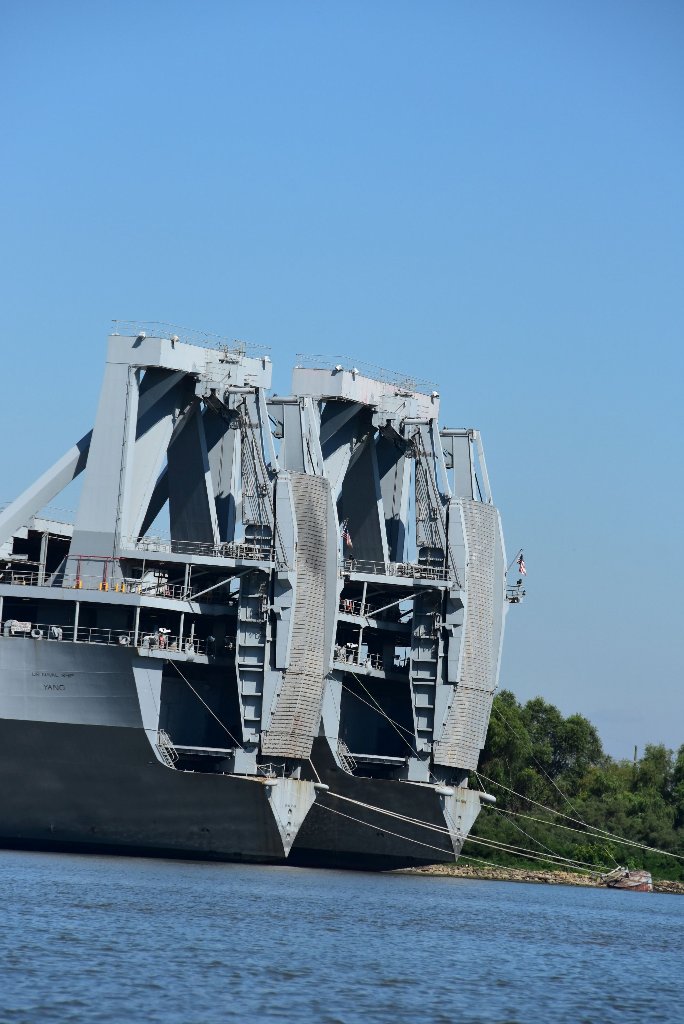 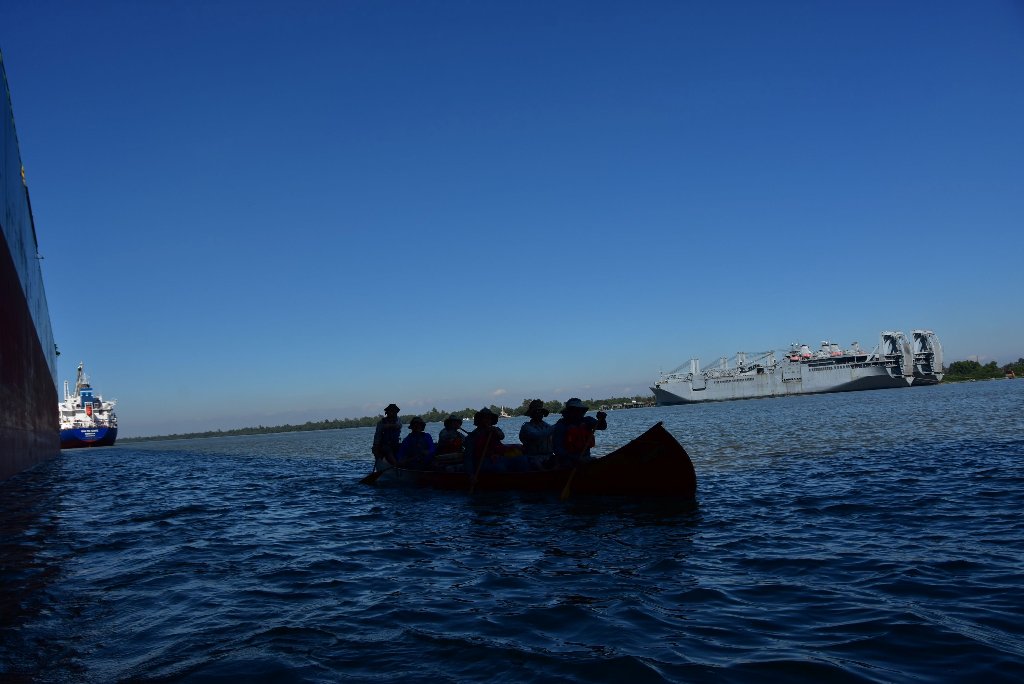 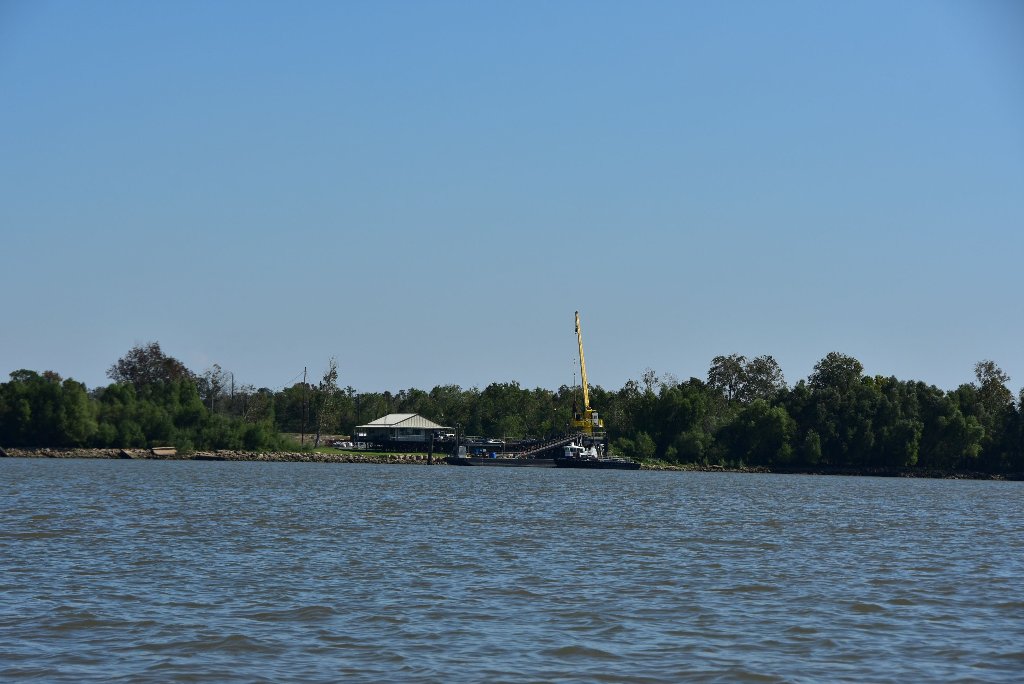 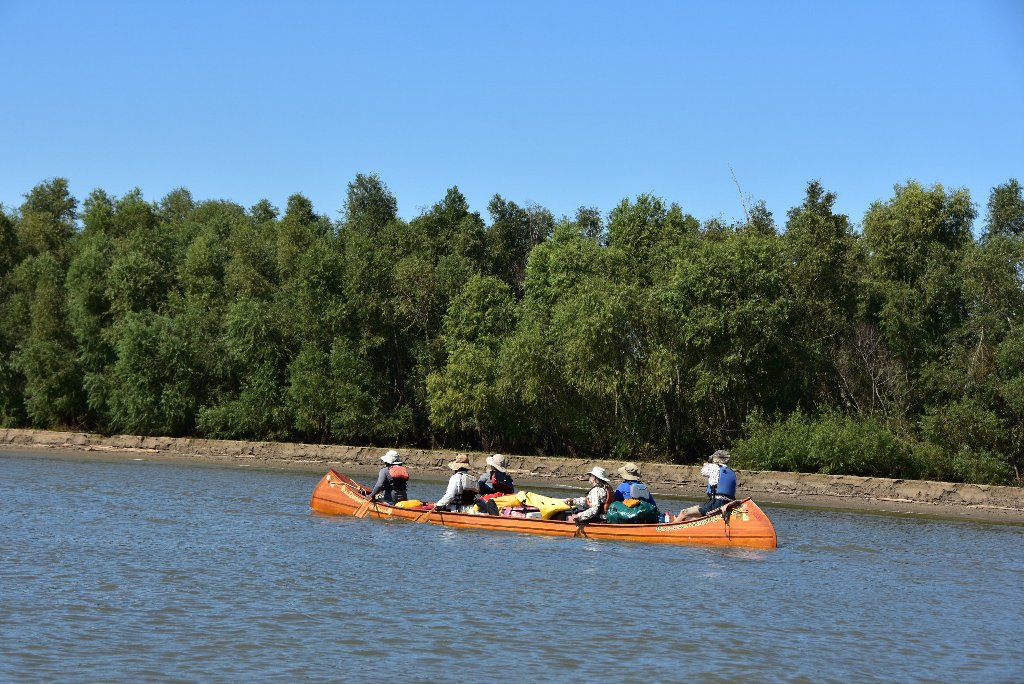