There is a beautiful cubbyhole of a landing as you paddle over the top of Blue Heron Point, but its posted “No Tresspassing.”  Keep paddling a little further downstream and you will discover a modest ridge of willows with dry ground up to bank full around 24 KG.  This willow wetlands is exploding with tons of wildlife, especially amphibians and birds behind ridge.  Good picnicking and camping up to 24 KG.  Blue Heron Point is a thin sliver of willow-topped sandy ridge with some alders, some sumac and poison ivy, also purple vetch; but no cockleburrs.  In the springtime the frogs make a raucous roar well into the night, until after midnight.  Some of the creatures we saw at camp in March 2015: Amphibians seen include peepers, leopard toads, and bright green lizards; We heard some barred and great horned owls on the opposite shore towards Butte La Rose; beaver slide by in the mist, softly grunting to each other in throaty gutterals; two herons pass overhead while fish tails sploshings are heard in the backwaters; mosquito hawks hovering overhead along with Caddis flies.  Other birds we have been seeing: anhingas, bald eagles, tufted and pileated woodpeckers, crows, egrets, ducks and cardinals.  The vegetation seems to have changed slightly below the I-10 bridge.  THere are more cypress trees along the main channel, and more scrub oaks, saw grass, bull rush, and something that looks like pampas grass.

From the Mark River Journals: “I wake on a tiny peninsula along Whiskey Bay navigational channel next to a tiny swamp full of yellow rockets and driftwood. The evening before, Driftwood Johnny took a swim in the debris infested swamp and noticed the temperature was quite warmer than the main channel. That let me know the spawn is upon us. Large gar and black bass splash in the swamp throughout the night preparing for the most exciting time for animals of all kinds- the spawn.  The spawn is the time of plenty for most animals. The flooding and warming of these waters triggers reptiles and amphibians of the arrival of spring, the time to reproduce and celebrate the welcoming of new generations.”

Good camping or picnicking can be found at the mouth of the Upper Grand River at mile 70.9, best choice would be the north side in a slice of woods growing on top of a ridge along the bank.  This north side would be dry up to around 24KG.  An even higher bank is found on the southside of the Upper Grand River mouth, but only with difficult landings in a tortured forest, rough woods, very overgrown with scrubby undergrowth and vines.

Upper Grand River is the first major cross basin distributary.  Water that enters here crosses the Atchafalaya Basin west to east and slams into the East Protection Levee at Grand River Landing (Public Boat Ramp).  It is approximately eight miles to cross the Basin here.  The water flows along good at all water levels except during drought, but will be especially strong during the Spring pulse.  Upper Grand River feeds many wetlands through Bayou Pigeon and its many forks, and eventually reaches Bayou Sorrel and joins its waters on the swamp journey to the Gulf.

Perennial Little Tensas Bayou flows north when the Atchafalaya is 20KG or above and joins the Upper Grand River, but is often choked close by hyacinth.  Nearby Cowpen Lake also choked over.  Slim Island starts below the bayou.

The forests in the vicinity of this dock are carved by several oil exploration and extraction canals.  This area is a popular oil pipeline crossing, with seven major pipelines in the next four miles.

Splice Island comes to a fine point at 75.5.  The two channels flow almost parallel to each other for about 10 miles, in places separated by a half mile of woods or wetlands, and then at long last they come to a vary fine point and re-join their waters.  A small homestead is located half mile from the tip on the Main Channel side.

There is good camping and picnicking at the end of Splice Island, but only in low or medium waters.  The bottom end goes under around 20KG.

Primitive Camping in the Marshes & Swamps

Camping (and picnicking) in the half-submerged Cypress-Tupelo Gum Swamps and Coastal Marshes of the Atchafalaya River Basin can be very challenging.  You might end up on spongy ground with half your camp in water, half on nothing but masses of vegetation held together by interlacing and interlocking roots, tubers and mud. It would be wise to pack a hammock.  This could be considered a semi-tropical jungle, after all. It would also be wise to pack an extra tarp or two for extra protection on wet spots.  Be sure to set your tent on a tarp for extra protection from below.  Other useful items to pack specific to the Atchafalaya include: machete, water filter, small camp stove, mosquito netting, GPS, and as already mentioned: hammock and extra tarp.  But like all challenging situations, there are many possible great rewards that accompany life in extreme situations, and the sometimes painful experiences.  Below is an excerpt from a wetlands camp in the Wax Lake Delta, which could be similar to camping in the wetlands anywhere below Krotz Spring:

We camped at the junction of an oil pipeline canal and a curvy waterway we have been following which connects the Wax Lake Delta with the Atchafalaya.  We are maybe two-thirds of the way back across the coastal wetlands to Morgan City.  Swampy marshes surround us as far as the eye can see.  There is no dry land to be found, even the solid mass where we are camped is a wet composition of tangled roots, mud and grasses just solid enough to support our weight, erect our tents, and even build a fire.  Dry land is a thing of the past.  Terra cognita is nowhere to be found.  The marsh is a rich mixture of roots, leaves, and sulfurous soil, half of this world, half of another.  Like peat moss, it exists somewhere between life and decay.  As you move around your footsteps are accompanied by lots of sucking sounds, squishing, gollumping, gollashing sounds.  And in the stillness of the pre-morning darkness those wet rubbery sounds seem to be emulated by the frogs, and are punctuated in the sighs and moans of the nutria.  The sonic atmosphere rings with wetness of the place.  Later after sunrise the swampy symphony comes to a crescendo when the squeaks, whistles and shrieks of various birds, rodents and insects add their voices.  And us… what does the guttural bubbling monotone clunking of man’s tongue-speak sound like to the natives of the swampland?  Crickets join the morning chorus of grunts, squeaks and squishing noises, like rubber rubbing against rubber.  The plaintive cries of the nutria and Mark River adding in his own grunts and moans from his tent to the choir.  A lone songbird, a cardinal, makes a burst of song and then falls silent.  More sounds resound off the muddy channel: bankside thrashings, something crackling through the bullrushes, some violent splashing, then silence.  That was ominous.  A gator thrashing a nutria?  Frogs make all kinds of sounds, some coughing, some re-running short drum beats of jumbled snatches of snoggles, some grinding their gums and making that squishing rubber sound, a bullfrog bellow, a repeated chirping staccato like a giggling lamb, and then another cardinal.  David’s light flashes on in his tent.  And then Mark River’s.  Mark River can be heard stomping through the crackly bankside mattress of bullrushes, ferns and dried greens.  The far-off moan of a boat engine adds an accent.  One frog can be heard hiccuping like an amused old man clucking his tongue.  The whining of mosquitoes and at least two different kinds of crickets can be heard intertwining their rhythms, clicks, rasps and squeaks, maybe male and female?  And then a clan of coyotes far away cries and cries. (John Ruskey)

I step outside my tent and to my surprise the water has risen to a point just below my tent tarp. The night was full of sounds of nature. The swamp filled with yellow rockets came alive as we laid our heads after a long day of paddling. Crawfish fishermen checked their traps deep into the night, as bullfrogs bellowed sounds that resembled yapping dogs. Raccoons fought in the trees, eventually falling to the depth of the swamp, sounding like an unplanned belly flop. A beaver downed a tree in the distance. Various owls hooted in a-cappella as if to be competing for originality. The acoustic campsite entertained throughout the evening. A few raindrops teased me to the point were I left my cozy tent to reassure my fly. The fog clears and the sky opens, as we prepare to pack the canoe for our journey to the gulf.  We leave our campsite, which is sliver of land between Bayou Butte and the American Pass. We enter Bayou Big Joe headed to Flat Lake. The cypress trees spanish moss is getting thicker and darker in color. Entering Flat Lake, we noticed a large eagle high in the trees. This is a good sign. Our morality rose to a high level as we start to synchronize our paddle strokes and attack the flat freshwater lake. As we glide across the lake, I notice more bald eagles lining the channel, as if to direct us back to the Atchafalaya River.  (Mark River) 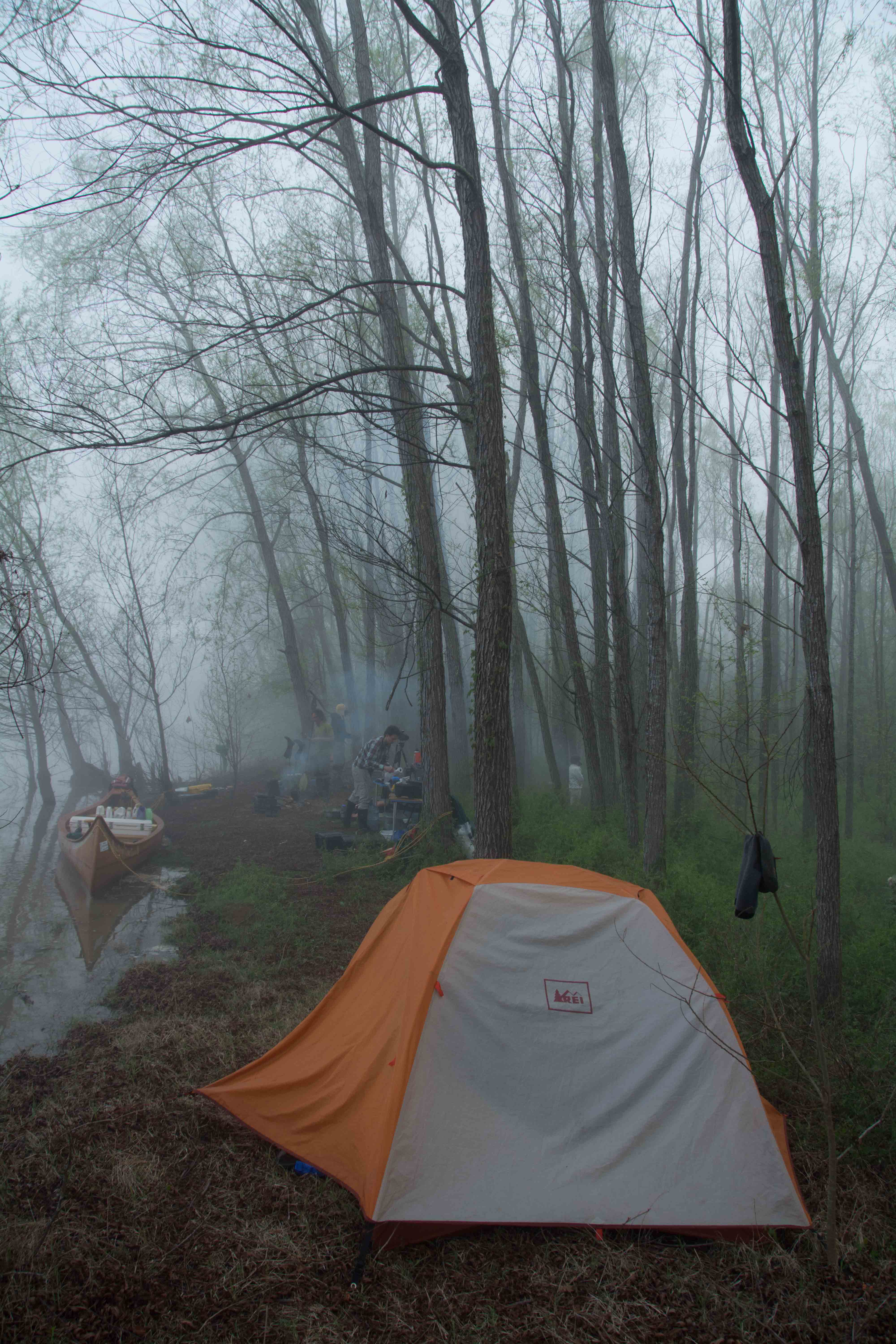 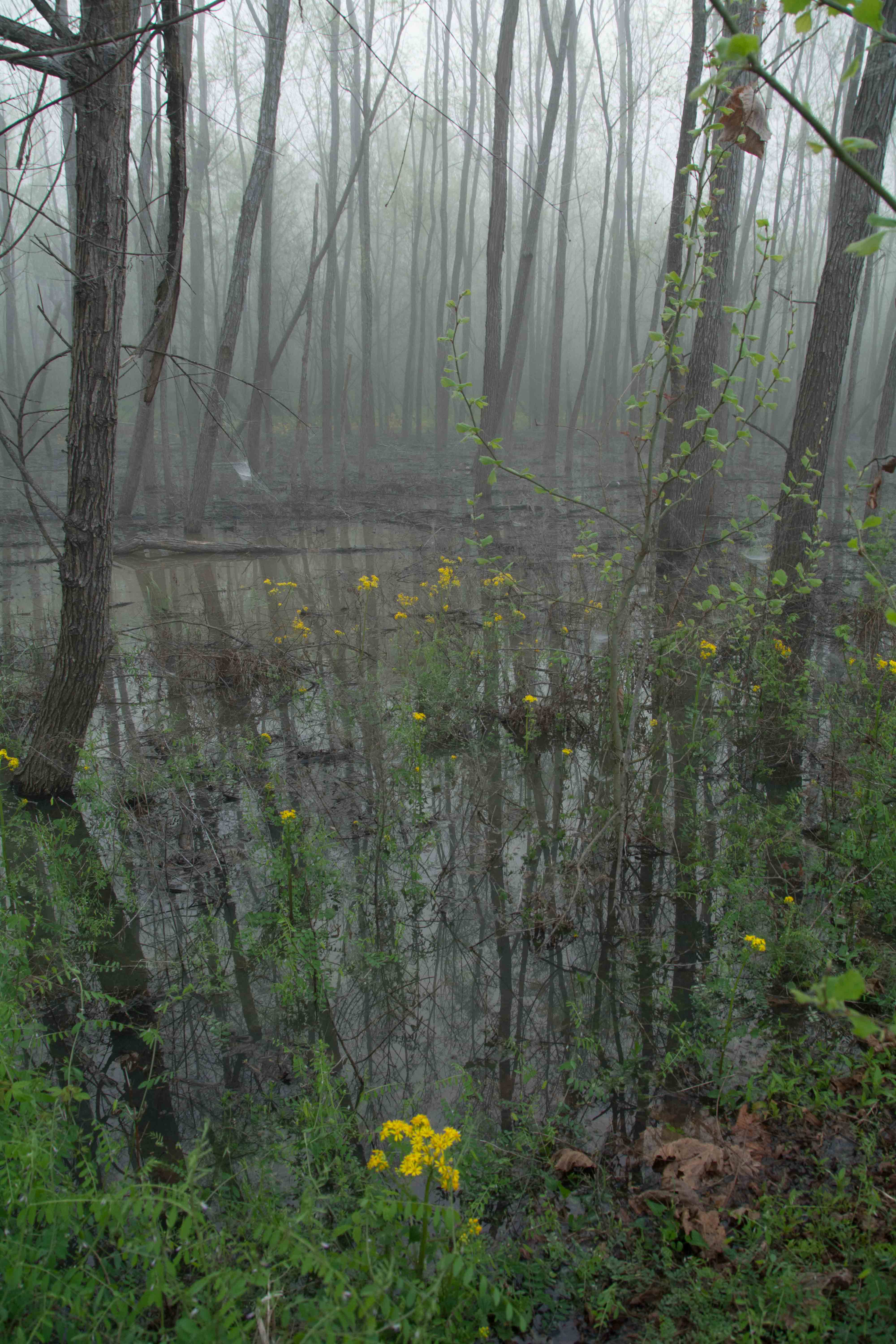 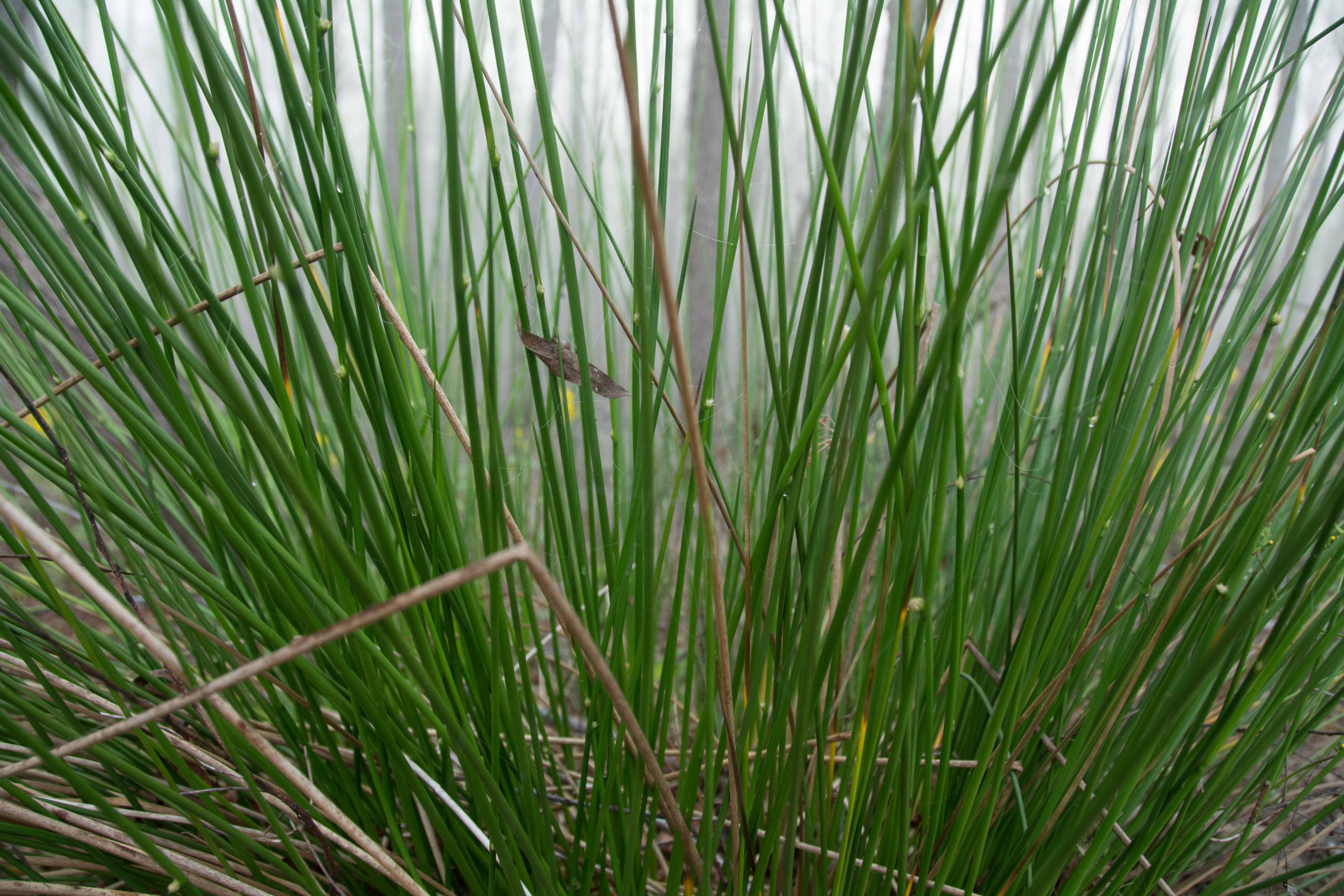 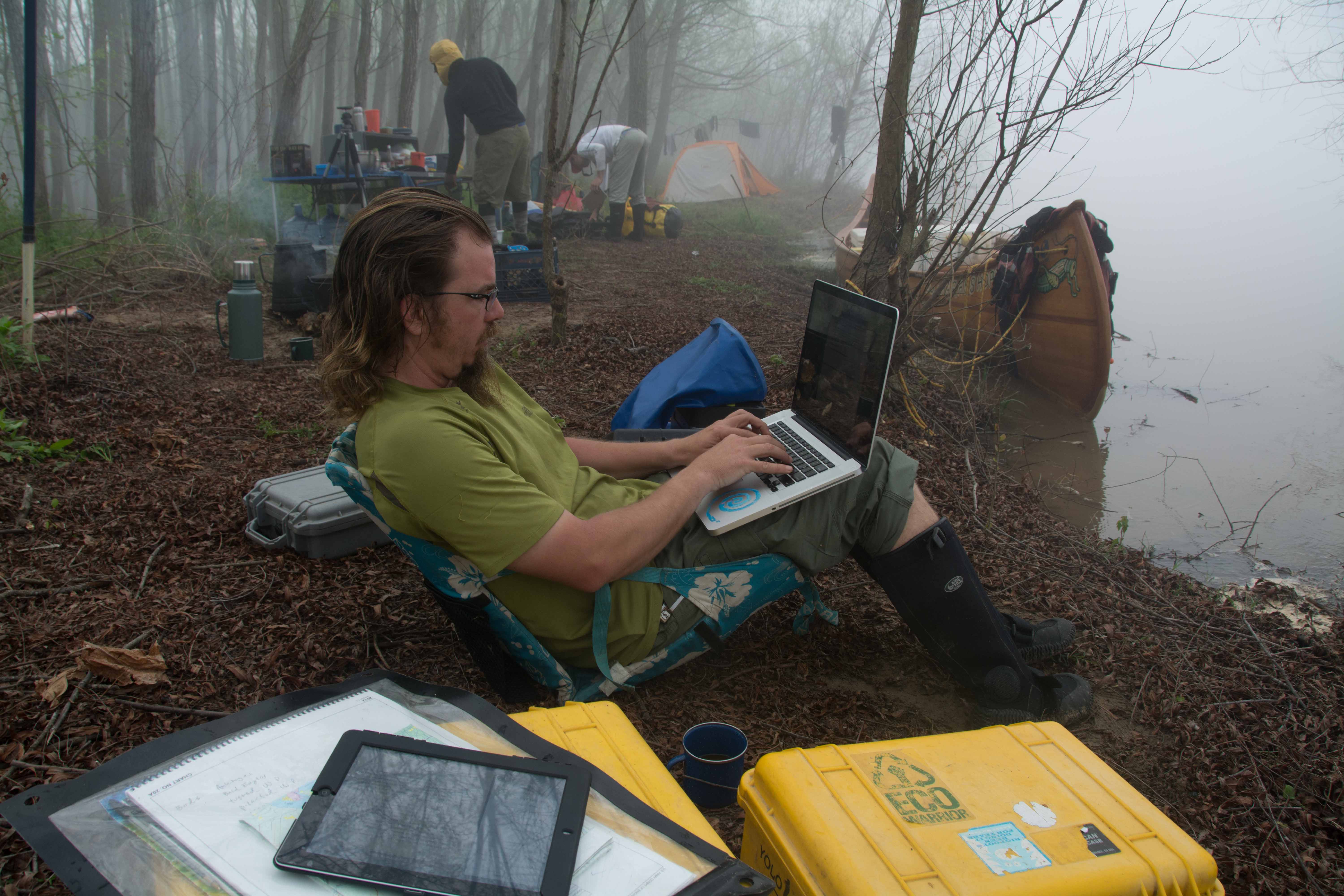 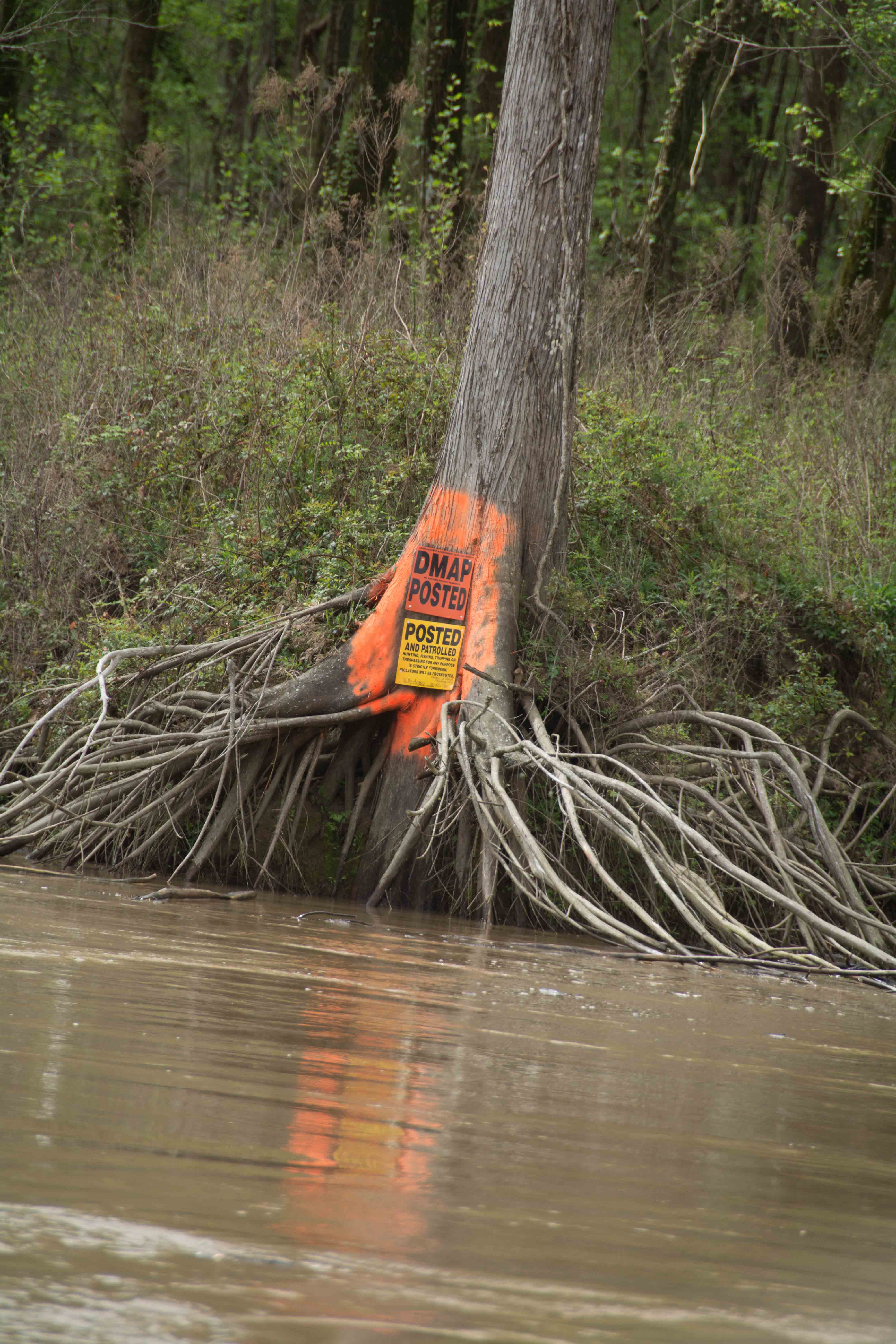 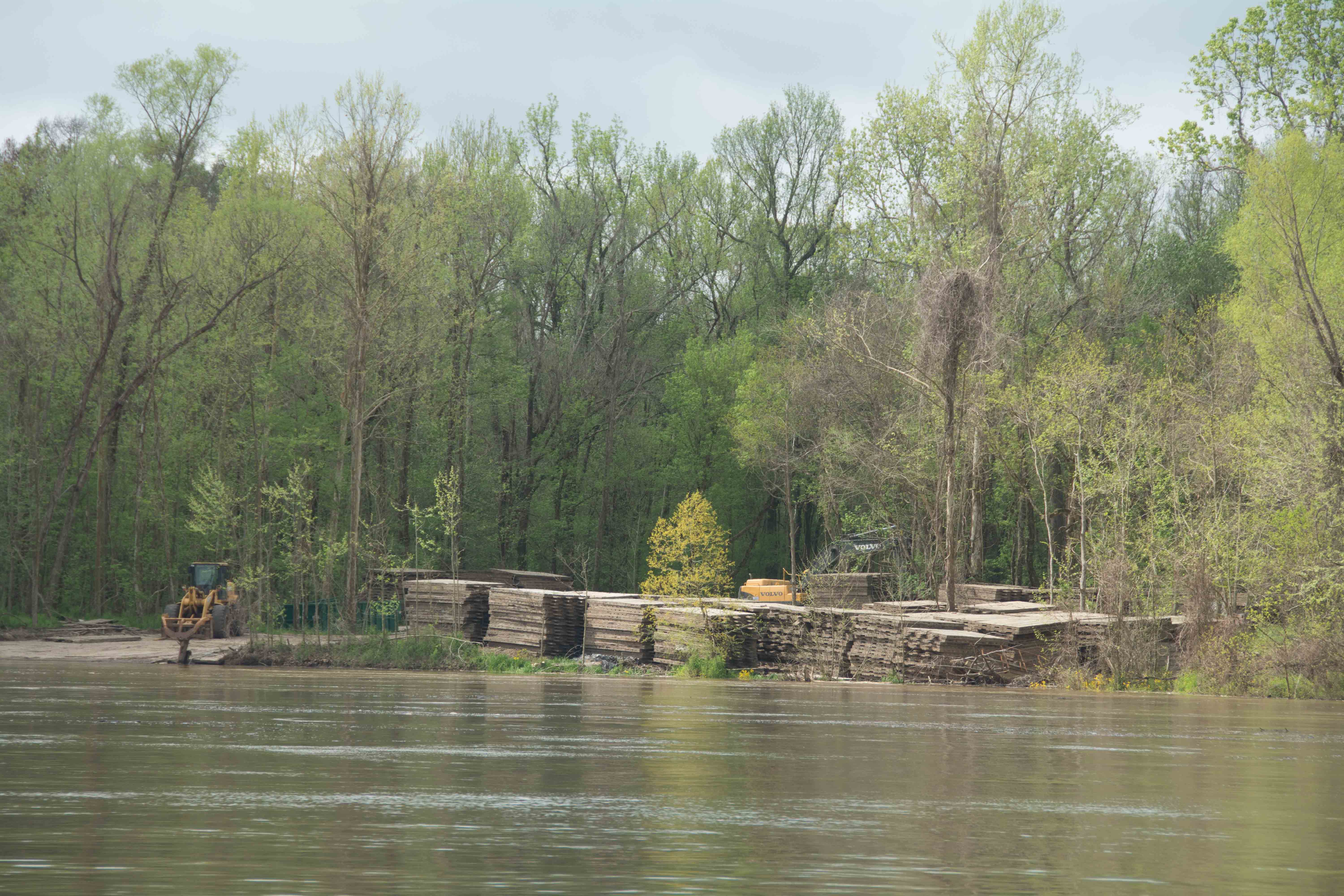 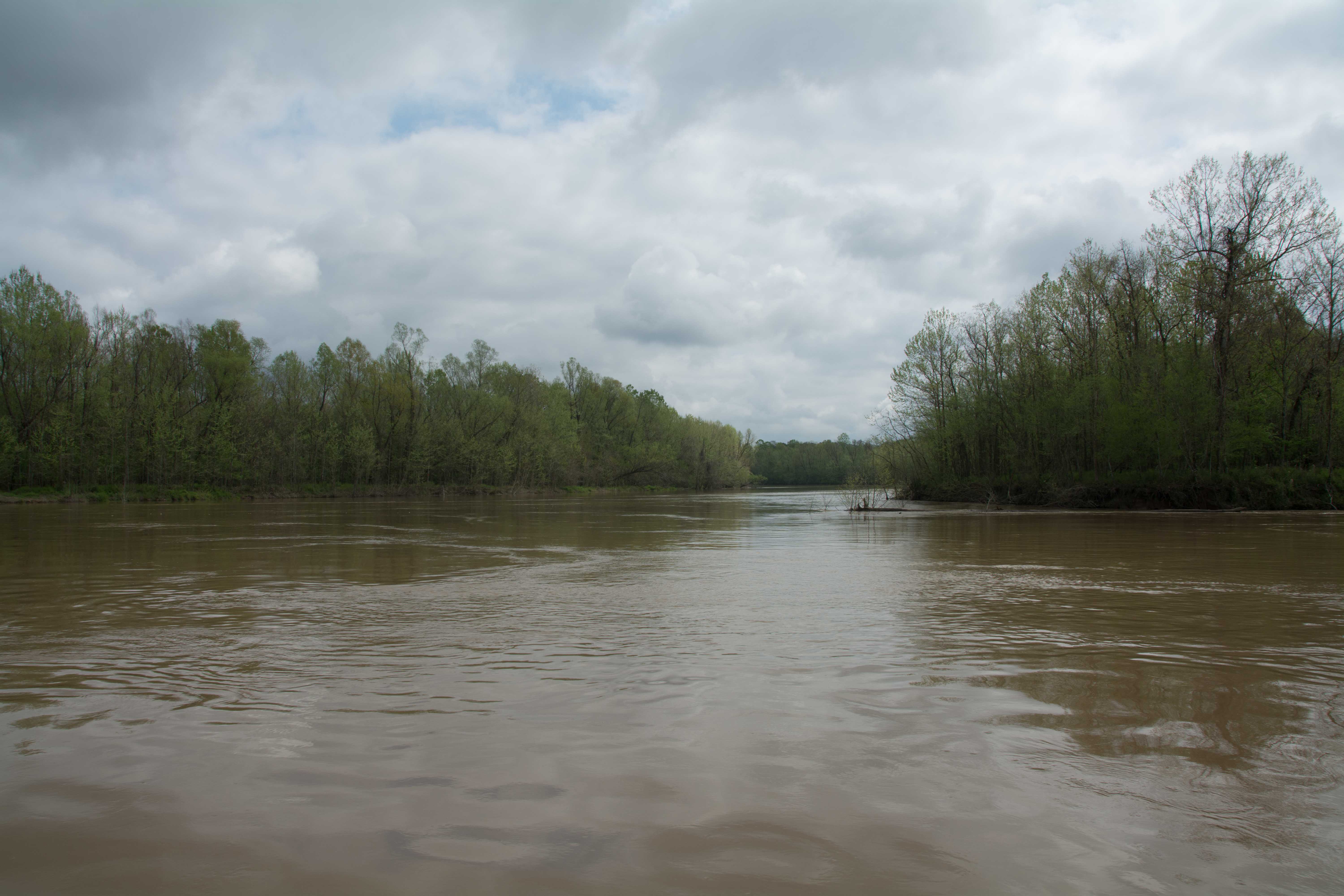 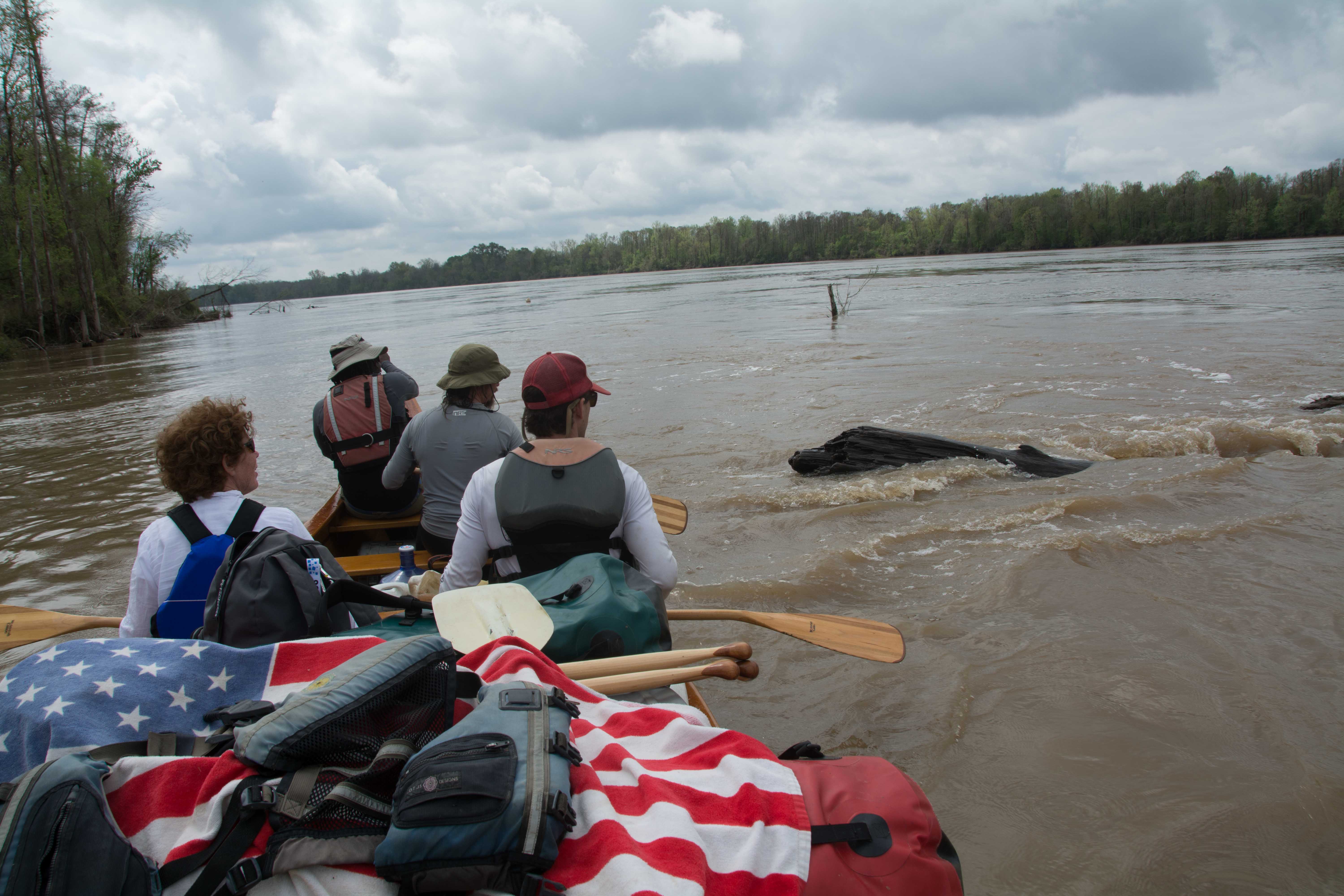 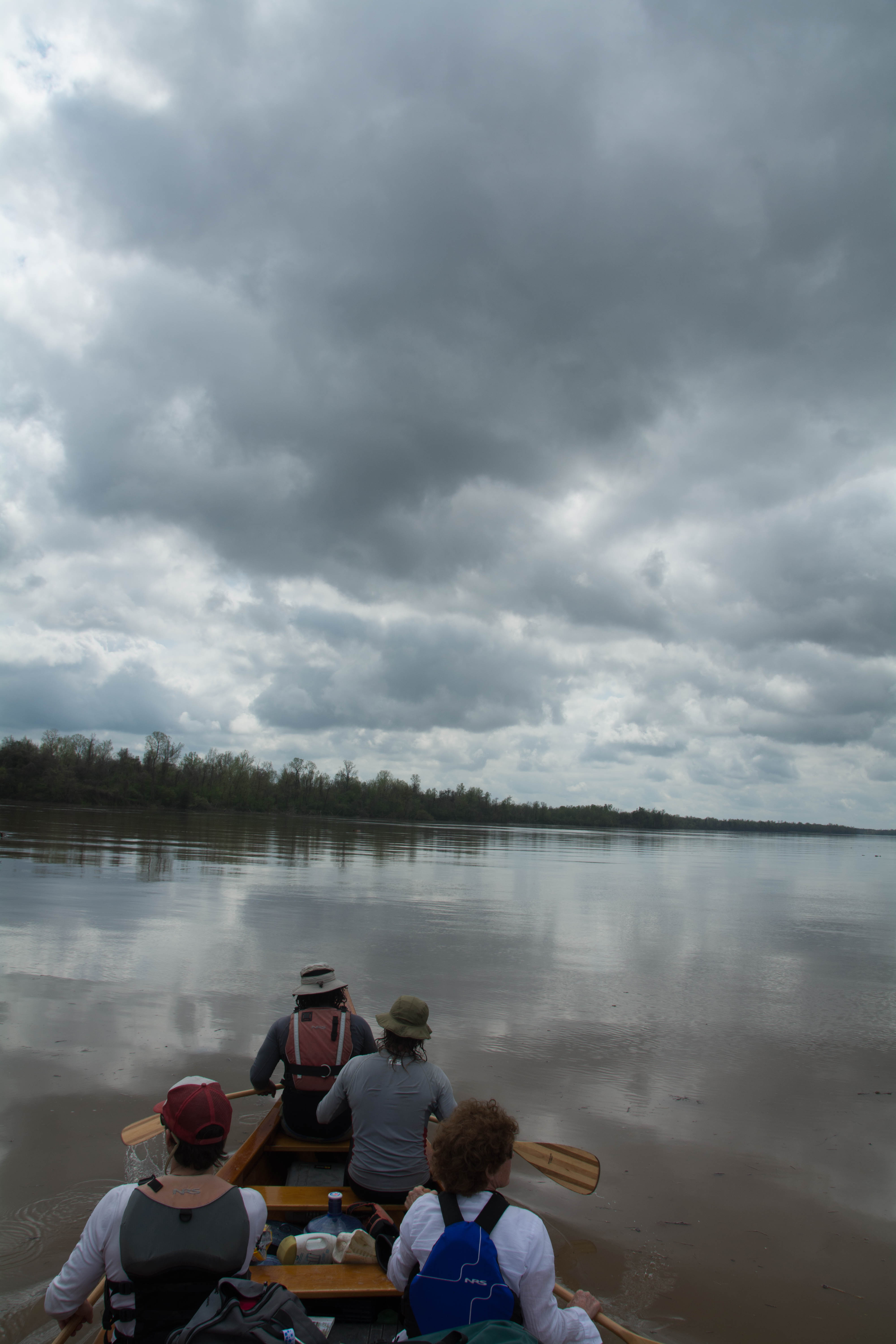 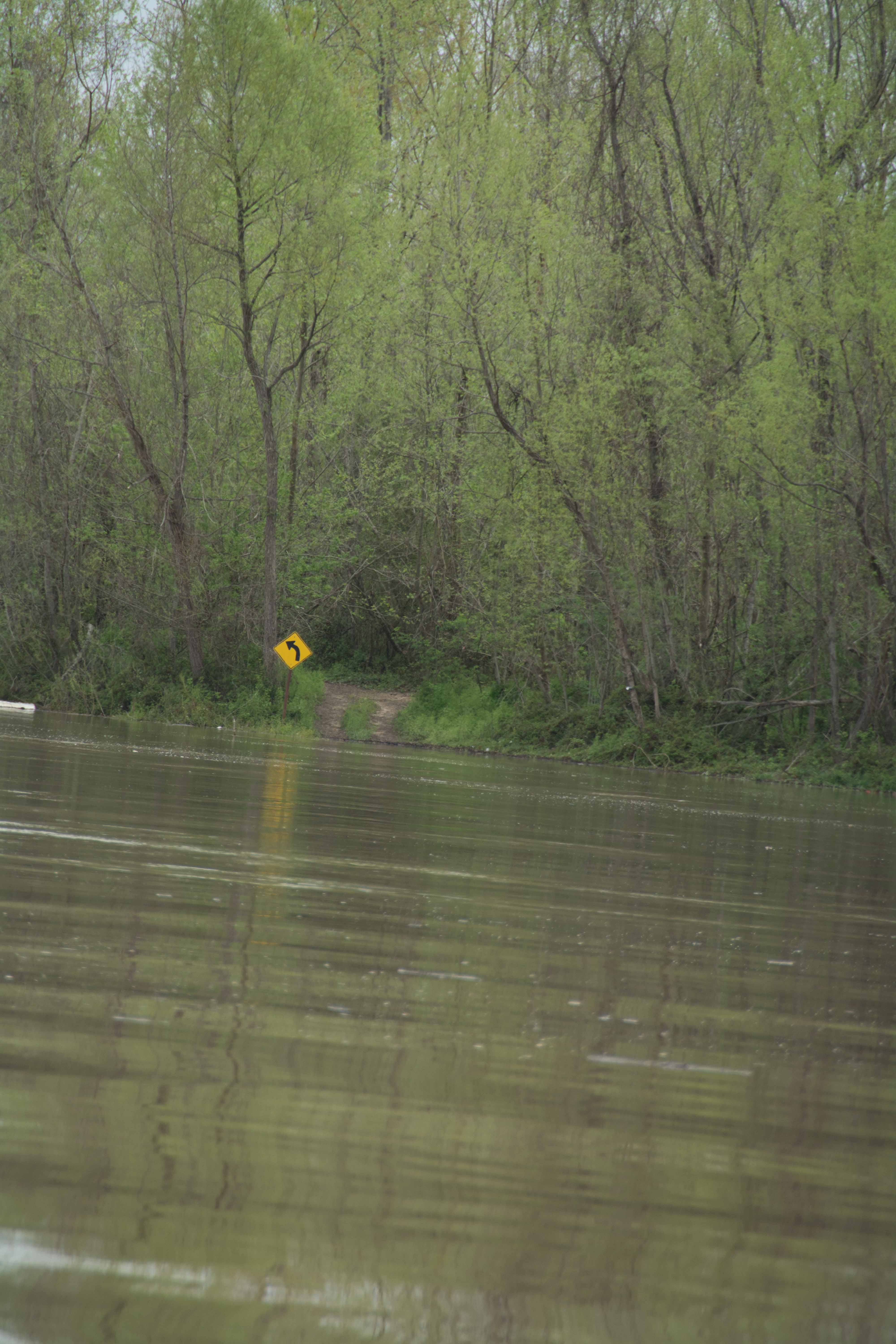 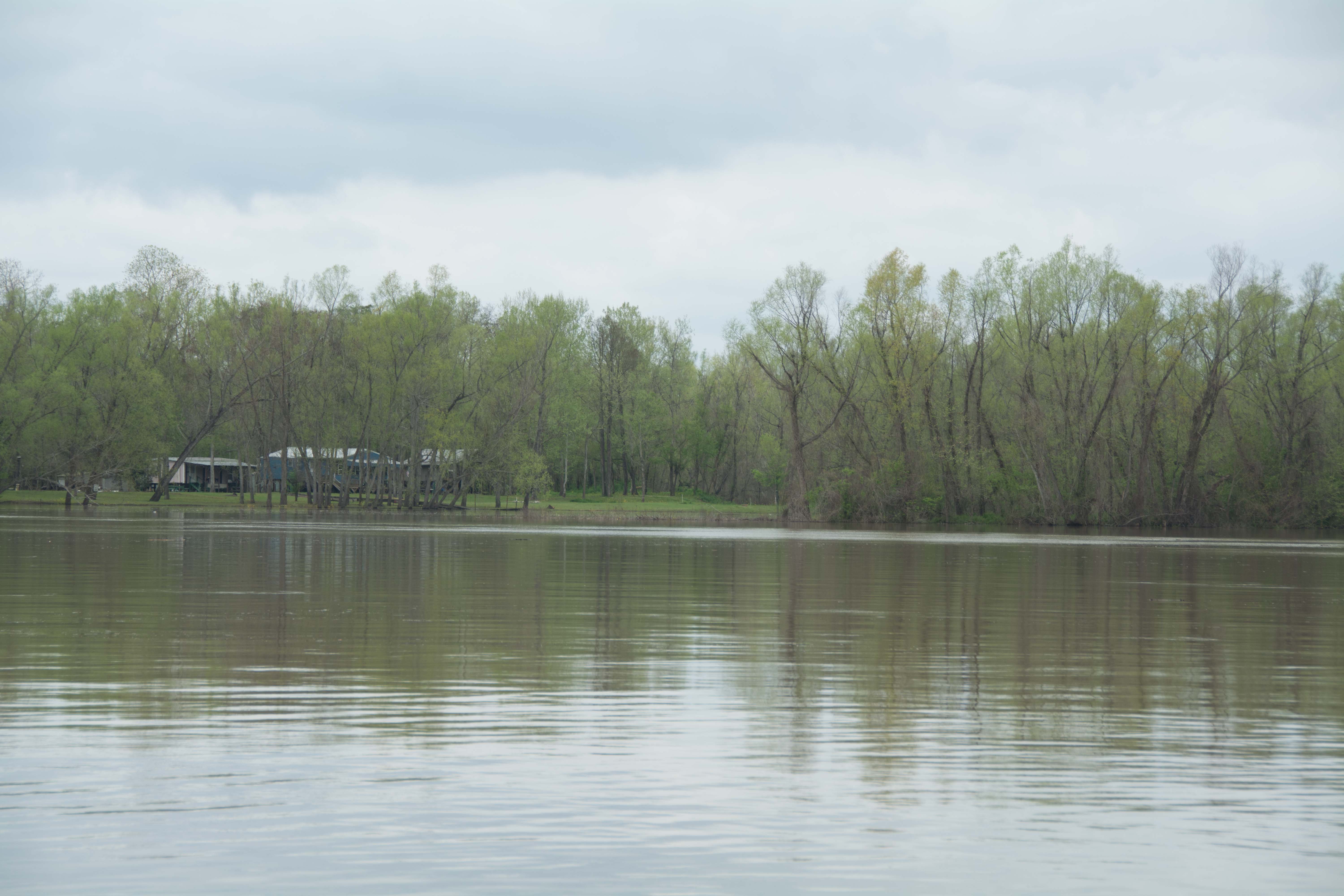