Directly below Morgan City a number of petro pipelines cross under the river, and one electric transmission line over.   Equilon Pipeline has buried an awesome 22” crude oil pipeline at mile 122.4.

Paddlers, this spacious boat launching area is the single best place to return to after paddling to the Gulf to meet your ride.  You could also have planned ahead and left a vehicle here — it would be safe.

Welcome to the biggest and best boat launch in the entire Lower Mississippi Rive Valley!  Protected harbor to launch in and out of.  Two boat launches and a docking area.  Open grassy fields towards river, and a huge parking lot behind towards levee.  You can leave your vehicle here.  Safe parking for extended lengths of time.  A park with toilets that actually work.  This boat launch is located at the intersection of the Atchafalaya and Intracoastal Waterway right bank descending at 124.2 (three miles below Berwick).  From land access via River Road, three miles south of Berwick, just past Johnny’s Seafood and Bait Shop, 950 River Rd, Berwick, LS. 70342, 985-384-5258.

Warning: Inflow.  Paddlers, be alert, there is flow going into the Gulf Intracoastal Waterway off the Atchafalaya.  Hardly noticeable at low water, but sucking inwards with strength at high water.  When you paddle back from the Gulf this might be an additional consideration when planning your route.

The Gulf Intercostal Waterway cuts through the cypress swamps and coastal marshes west along the Louisiana coastal marshes and into Texas.   There are a number of options from here on down to the Gulf for exiting east and west along other portions of the Intercostal Waterway, and interconnecting canals.  Paddlers have been known to paddle down one of these options for destinations off the big river.  But be ready for a long flatwater slog down straightline canals with nothing but barges, workboats and other commercial traffic for company, and small boats busy as bees.  Your bankside companions will be a long parade of herons, egrets, pelicans, gators and turtles.

The Gulf Intracoastal Waterway is the portion of the Intercostal Waterway located along the Gulf Coast of the United States. It is a navigable waterway running approximately 1050 miles (1700 kilometers) from Carrabelle, Florida to Brownsville, Texas.

The waterway provides a channel with a controlling depth of 12 feet (3.7 meters), designed primarily for barge transportation. Although the U.S. government proposals for such a waterway were made in the early 19th century, the Gulf Intracoastal Waterway was not completed until 1949.  (Wikipedia)

Beautiful forest camps can be found all around this point, and on both sides down from the point up to 5 feet on the Morgan City Gage (MCG).

Navigation Channel Buoys are placed along the main channel of the Atchafalaya River from here on down to the Gulf of Mexico in descending numerical order, the first one you’ll see below the mouth of the Intercostal Waterway is number 36.  Always keep a safe distance from buoys, especially in high water when you could be inadvertently side swept into one of them and flipped over.

124.9 One Pipeline (unidentified on USACE charts)

Lots of good campsites can be found along the outside edge of this bend, left bank descending, from 126 to 127 LBD, with the protection of a mixed willow and sliver maple forest behind.  Good protection in southerly winds or storms.  Small inlet at 126.7 LBD would afford even better all around protection.

The strong currents of the Atchafalaya River become focused here around Bateman Island Point with lots of turbulence and giant powerful eddies on both sides of the main channel.

As you come around Bateman Island Point you’ll notice a long shoreline composed of healthy cypress forests.  Good landings can be made amongst these tall giants covered with Spanish moss, with beautiful protected campsites or picnicking up to 5 MCG.  Excellent protection from west winds or storms.  This is the last big stand of cypress trees you’ll see on your way to the Gulf waters.

You could access Bayou Shaffer on your return trip back up the Atchafalaya to Morgan City.  After reaching the Gulf, turn around and paddle back up the calmer, hence slower, waters of Bayou Shaffer.

Glass Island sits on the west side (right bank descending) of the navigation channel almost in the middle of the mile-wide Atchafalaya River at this point.  At high water (around 5MCD) Glass island is a thin sliver of sand, a grassy shelf sitting several feet above water level with several stands of young willows.  At 3MCG it shelves out 3-4 feet above the water level, which means that it would stay dry up to 7MCG.  But watch for tidal changes.  If you make landing at low tide, you will lose some of your perceived elevation.  On the other hand if you make a high tide camp, the water shouldn’t get any higher.  Glass Island is unfortunately beset by broken beer bottles and picnic trash.  It looks like empty bottles have been set up in the sand and shattered during target practice.  I want to walk barefoot and enjoy the sand, but it makes me nervous with all of this glass strewn about everywhere.  I wear shoes and grit my teeth at the thoughtlessness.  But soon my anger is softened by the view.  The horizon from Glass Island is a rich foliage fabric of clumps of willows and marshes mixed with the waterscapes of various exit channels, the main river, and some open bays.   When camping here or any of the Delta Islands, be sure to check wind forecast and tide charts.  Pull your vessel at least one foot above water level and tie it down.  Set tents at least one foot above high tide level.

Mark River described this island as Blackbird Island: “We find an island downstream, that looked like an Caribbean oasis. The first piece of sandy land after Morgan City.  A small island with tons of water hyacinth washed onto its shore. Some type of tern selected this island to lay its eggs. Soft sand with a freshwater swamp behind the open landscape, slowly filling as the river continues to rise. The alluvial fan is starting to show as the landscape gets wider and flat.  A nice breeze accompanied us throughout the afternoon, as I explore the small lake behind our campsite. A red winged blackbird lands on a reed of grass very close to where I was sitting. I study his bravado as he calls out, “Wok-wok wweekk!” I continue to watch and study, joining the call, until he realizes I’m a lot bigger than him, and flies off. I go share my new talent with my teammates as we sit around the fire feasting on lentils, gumbo and shrimp.”  (Mark River) 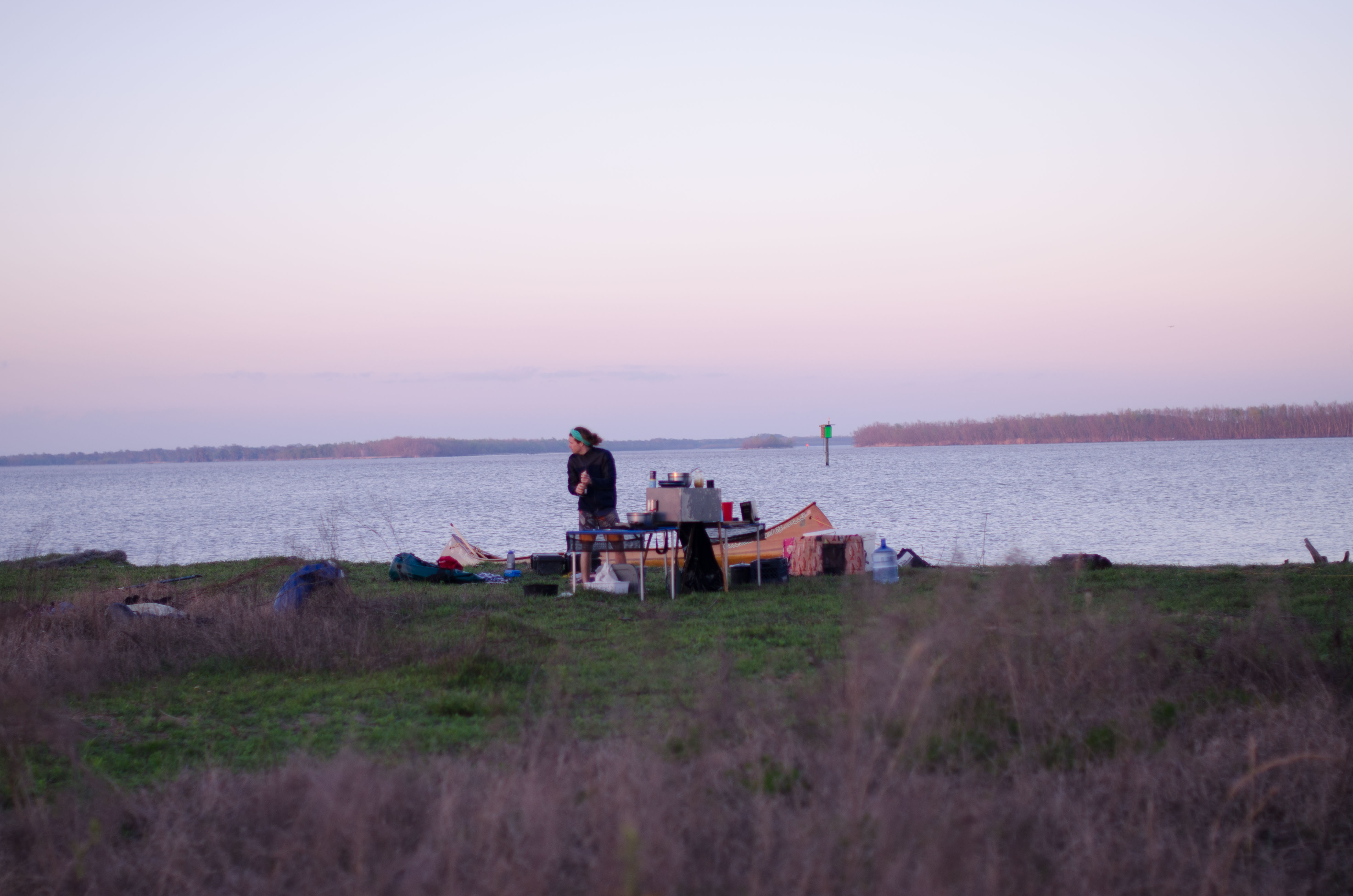 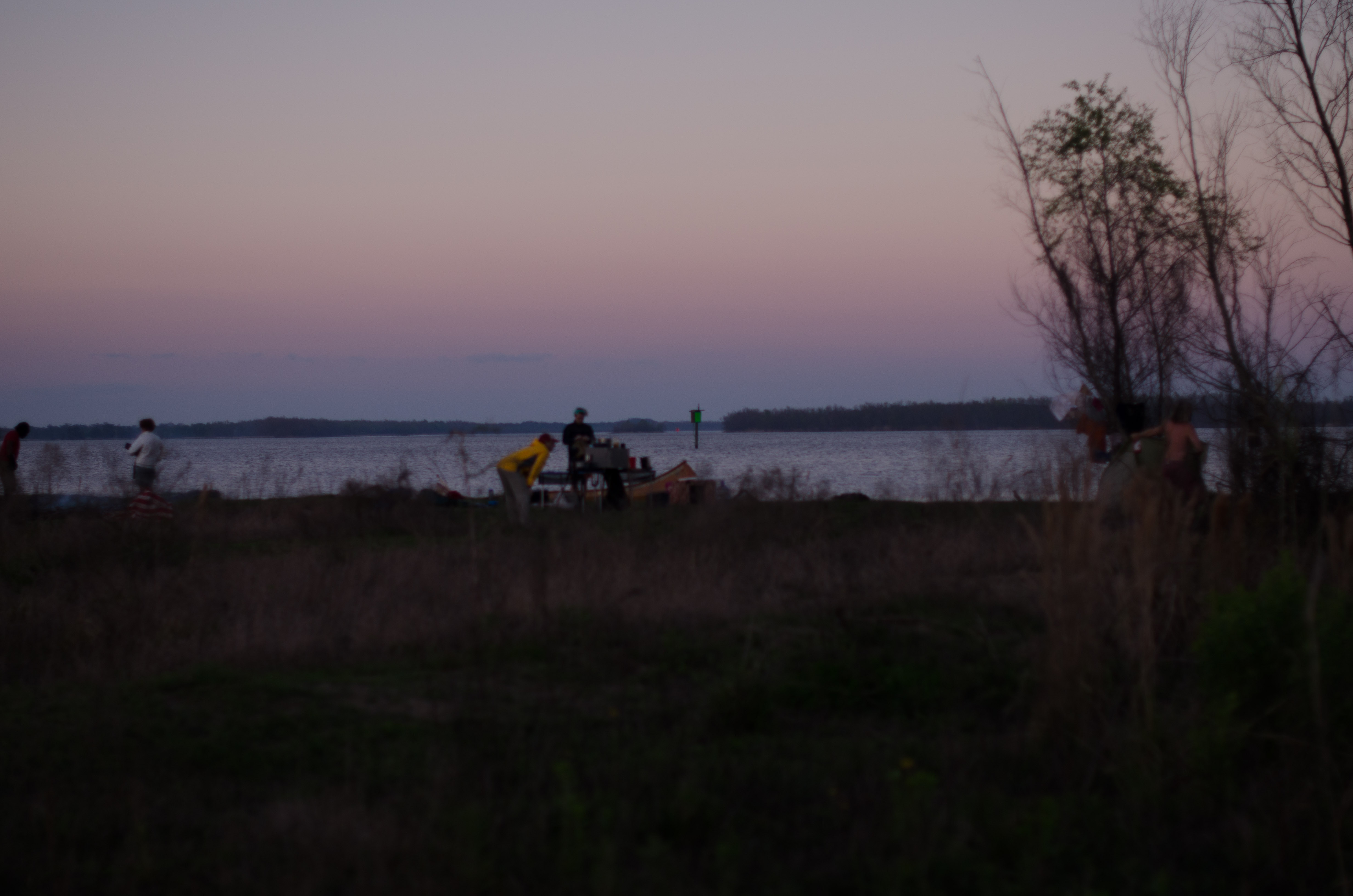