Night-Time Sky in the Atchafalaya Delta

After dark the lights of Morgan City, New Orleans and Venice glowed softly to the East, while the South and West disappeared into a lovely blue-black void supercharged with humidity.  Here in the deep darkness the stars of the Milky Way cascades across the sky to the black void of the horizon and Canopus Canapi hangs like a delicately glowing creamy yellow candlelight, as if a votary let loose on the dark face of the midnight water.    At midnight Orion appeared to be swimming north with Canis Major close behind.  And so we too now let ourselves loose upon the waters of America now reaching the waters of the world.  Our wild turbulent tumbling uncontrollably bubbling, swirling, rocking & rolling, whirlpooling, boiling, eddying, rampaging, gurgling, exploding, madcapping, ravaging, muddy river now easing into its advanced last stage in its long life.  The waters of the great circle of Colorado, New Mexico, Wyoming, Montana, Saskatchewan, North Dakota, Minnesota, Michigan, Illinois, Indiana, Ohio, New York, West Virginia, Virginia, North Carolina, Georgia and Alabama, and everything in between gently expanding exponentially outwards.  And now molecule by molecule the big river coming to rest in a new bed, in the ultimate resting spot (but not restful), the biggest waters of the world all joined together in the final place of repose for all waters.  And that is of course the deep blue sea.  Here is the transformative resting place of everything that lived.  Here is where all particulates fall to the floor and all volatiles rise to the air.  Here is where the all-encompassing community of nature combines and recombines, where like attracts like, and the love of life leaps higher than the waves.

You’ll see some stands of young cypress trees past Glass Island, but no campsites except in low water, below 0 MCG.

There is a nice sandy shell beach above the Avoca Island Cutoff left bank descending at about 133.9 LBD with good forest protection behind.  A slow inflow of water goes down the Avoca Island Cutoff, 1-2 mph at most water levels, a little faster in high water a little slower in low water.  Do not try to make landing on the downstream side of the Cutoff – hunting camp.

A new dike wall (not visible in the 2012 USACE charts) has been build left bank descending parallel to the main channel from 135 to 136 LBD focusing the river water into the big southward bend here.

In case things seem confusing here, dear paddlers, please know that a new navigation channel has been made around the Avoca Island Bend  which is not visible in the 2012 USACE charts.  This new channel stays LBD instead of the old channel marked on the charts which shows it to be RBD.  Regardless of what the maps say, all you need to do is follow the water downstream and you’l get there!  On the other hand, if you’re intending to take the upcoming Shell Island Pass (137.8 RBD) as your route to the Gulf, you will want to know exactly where you are so you can make enter the pass when you get to it.

As you come around the new channel through the Avoca Island Bend you will notice a long sandy-marshy island with some short willows.  This place offers dry spots for possible picnicking or camping up to flood stage 6 MCG, but check tide charts, and pull your vessel at least one foot above water level and tie it down.  Set tents at least one foot above high tide level.

The Shell Island Pass is the very first possible western exit into the Gulf of Mexico off the main channel of the Atchafalaya, and begins at the base of Shell Island (which is indeed a pile of shells – at least here at the mouth of the exit).  There is a dry place with limited space to make landing up to 6 MCG at the mouth of the Pass. We found the inflowing water speed to be 2-3 mph when the river was at 5 feet on the Morgan City Gage (MCG), and the banks of the pass to be at bank full.

In 2015 we paddled this route, with these observations: In hushed tones we floated down the Shell Island Pass, feeling the end coming near.  The water slowed and the current began releasing its hydraulic grip on the sediment load, and the channel broadened subtly, like the base of a Tueplo gum tree.  We made landing at the last possible shelf of land, the last piece of riverbank.  This was not a bank at all, as in the hard sand/gravel/mud edge true for most of the Lower Mississippi;  this bank is composed of living matter, an intertwining lattice of hyacinth, lotus, milfoil, alligator weed, elephant ear, and bull rush.  The veggie stew is not meant for heavy creatures like man.  Nevertheless it is the home of a thriving community of birds, amphibians, insects, crustaceans and fish.  Nutria seem to be the largest mammal allowed on this veggie mat.  They rule their floating vegetable kingdom from thrones made of piles of bull rush blades which add a couple of crucial inches of elevation and afford them a comfortable place to dry off, preen themselves, sun, play, procreate.  Furthermore these bullrush nests provide an effective vantage point from which they survey their vegetable wildlands and are able to scurry to safety at the first sight of danger (like a bald eagle or an alligator) or outside incursions like ours.

The Shell Island Pass took us off the Atchafalaya and floated us through the steadily descending treeline of scrubby willows, renegade willow clumps here and there hanging tough in the ever-increasing expanses of grasses… including rice, cut grass, saw grass, cat-tails, horse-tails, climbing hempweed, smart weed, and bull grass, and other swaying grasses of the marshes.  The grasses themselves eventually breaking off in clumps of floating grasses, and from there breaking down into individual stands of grasses, and then even individual shoots, as the land disappears completely into a mat of floating vegetable matter composed of elephant ear (also known as wild taro or coco yam), softstem bulrush, chickenspike, broadleaf arrowhead, purple ammanina, pondweed, water nymph, wild celery, stargrass, and lotus.  The nutria  rules from his kingdom from his bullrush throne, nests of bullrush clipped and arranged on slightly elevated mounds.  (From John Ruskey journal) 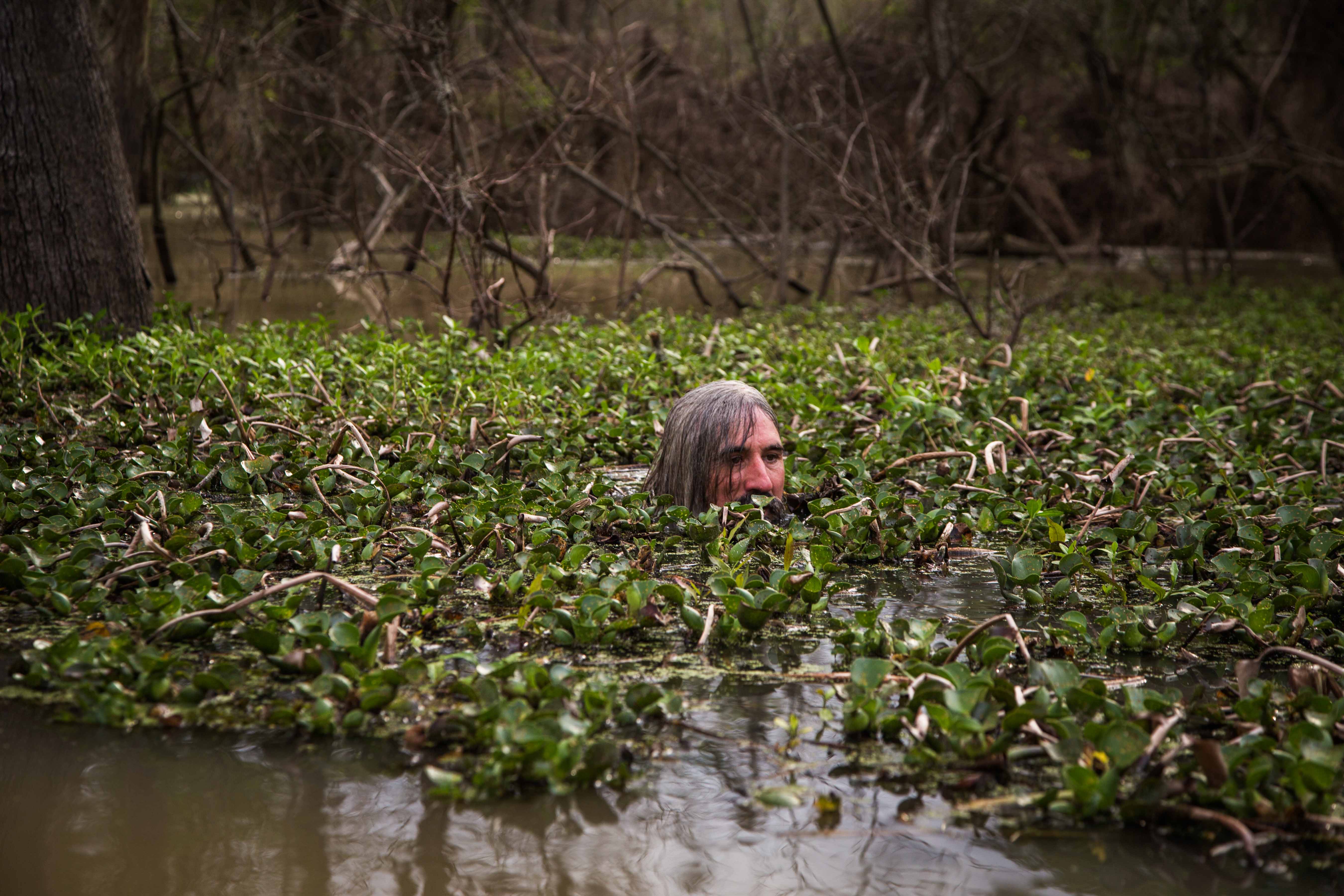 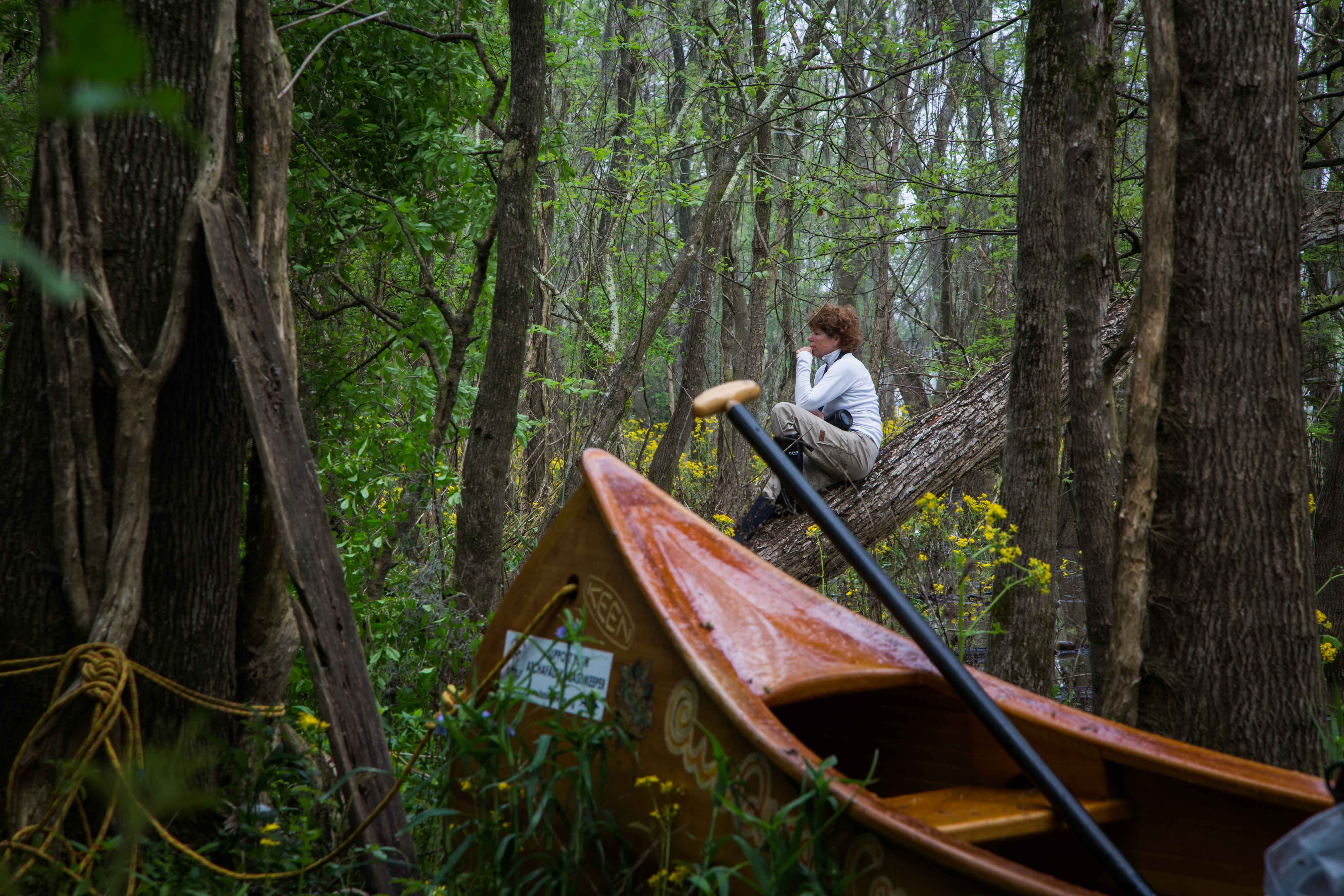 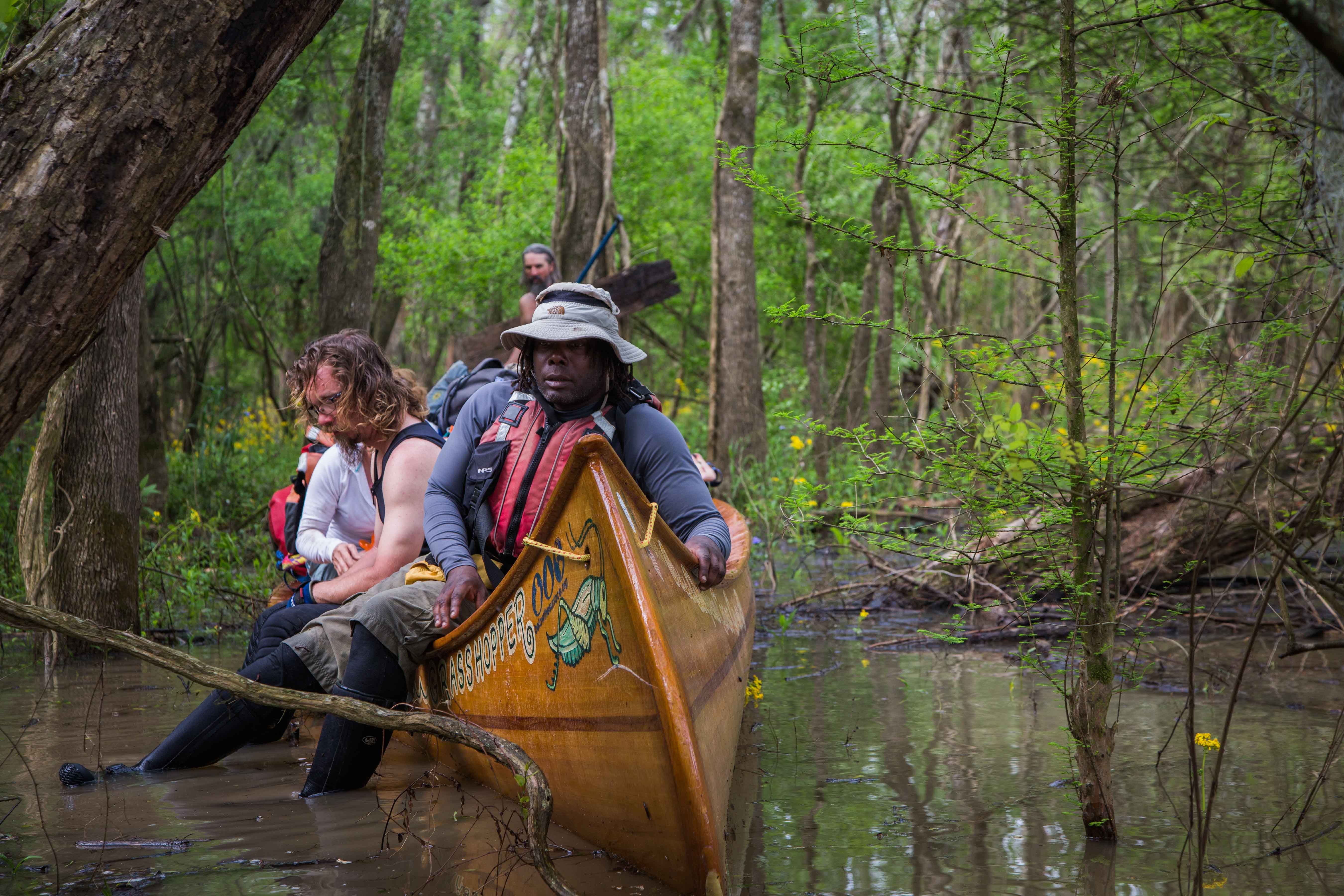 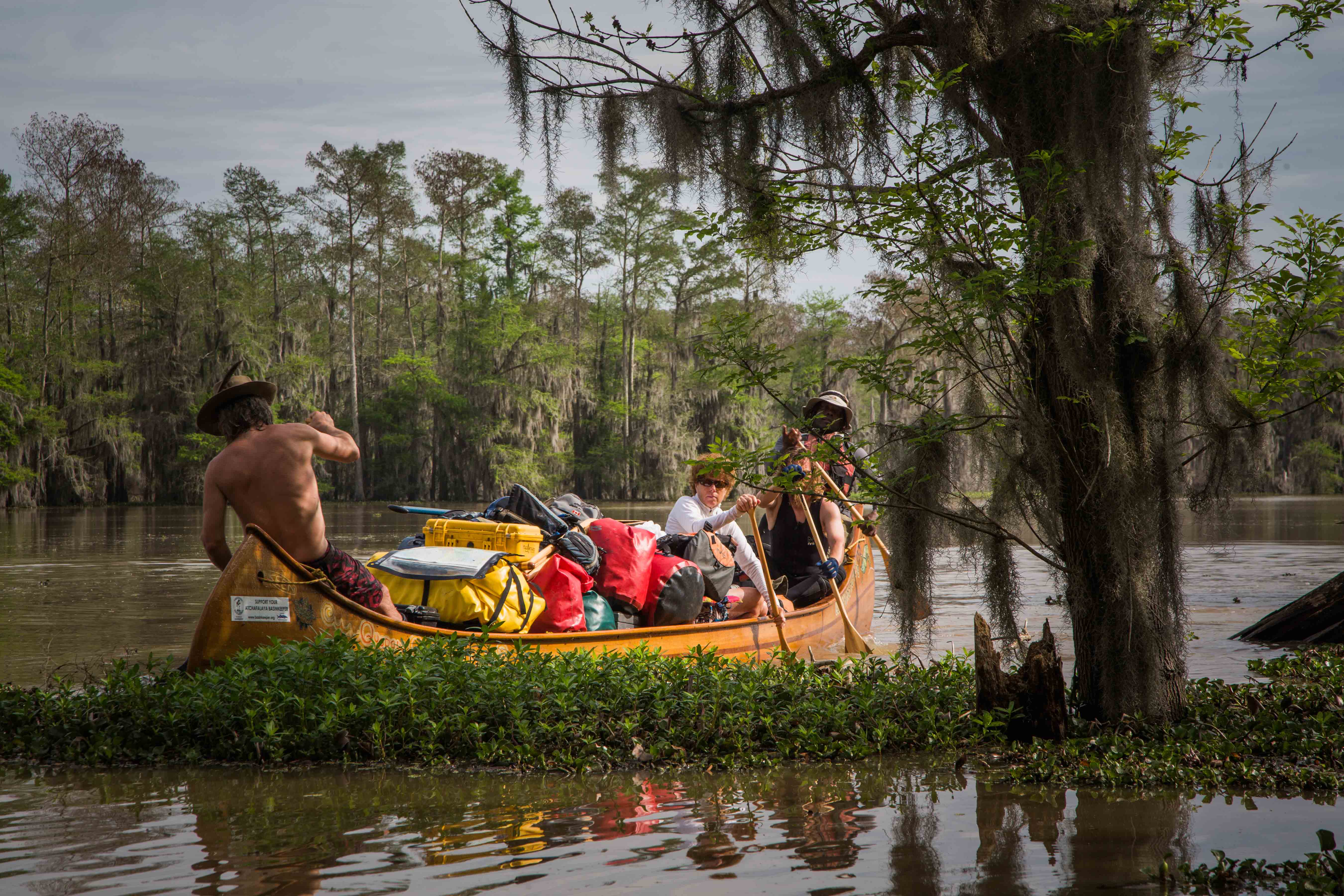 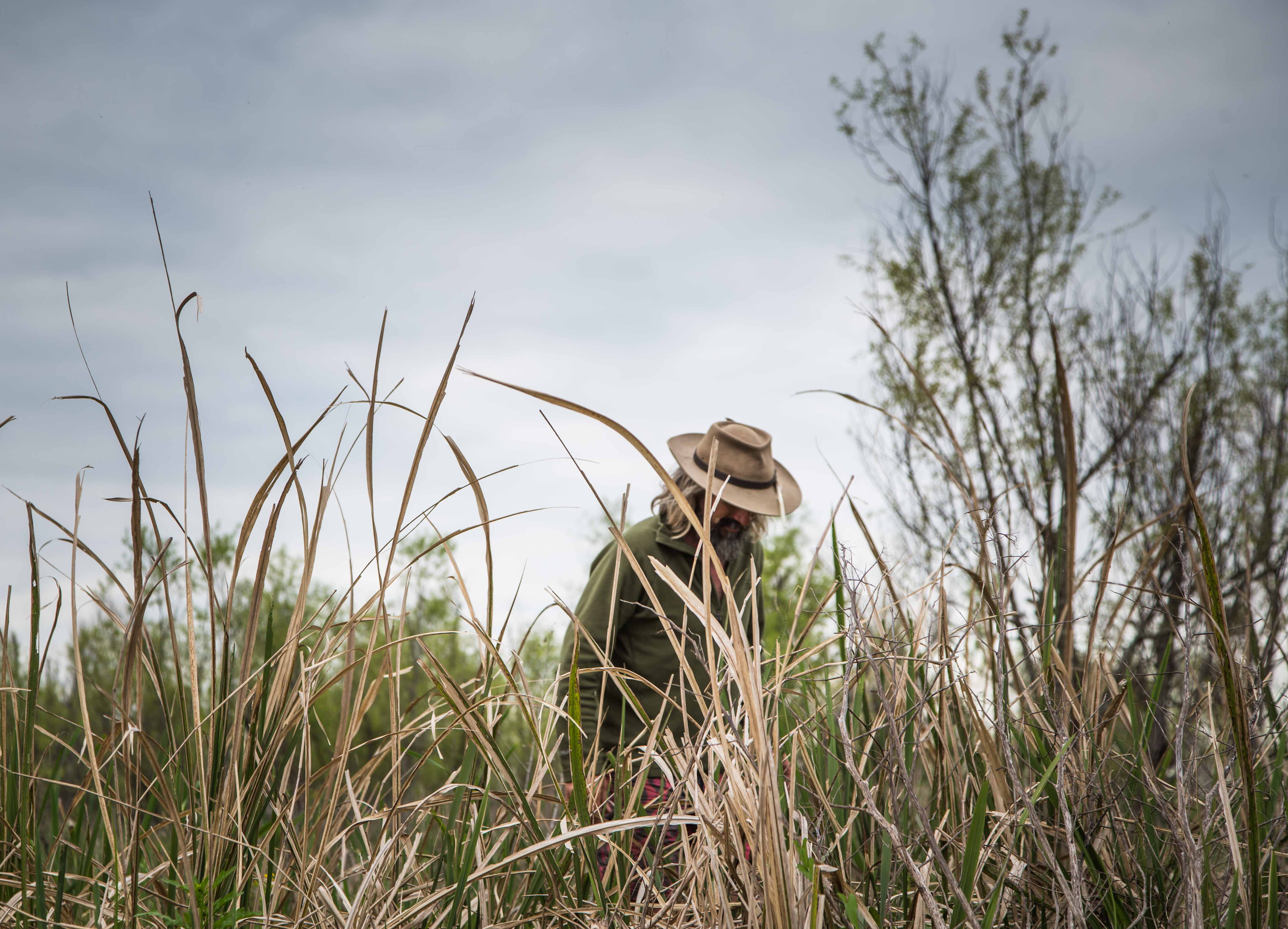 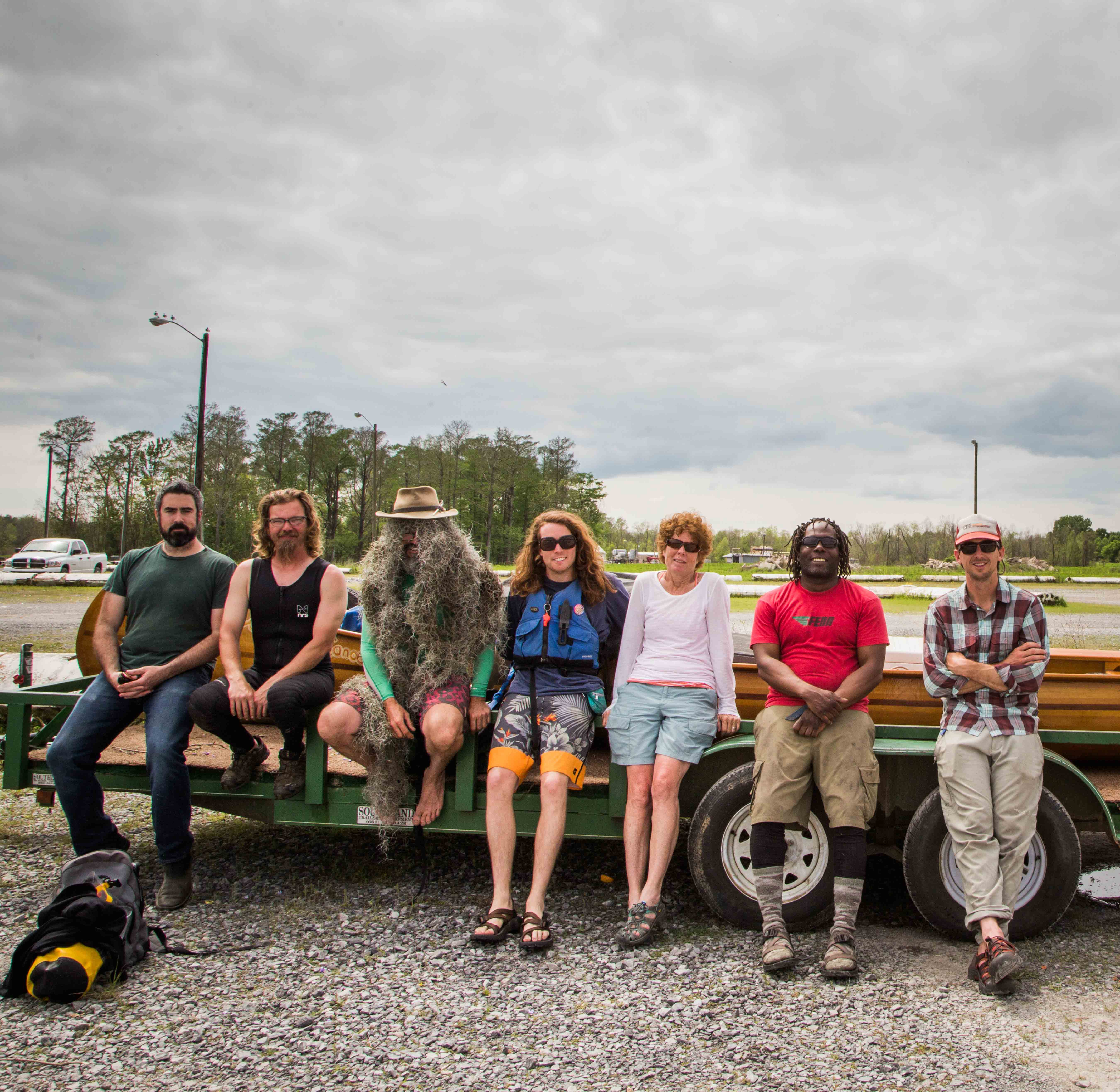