Good camping or picnicking can be found at Cypress Point on sandy willow bars up to bank full stage 30 SG, and on top of the tall collapsing muddy banks even higher, maybe up above flood stage 35 SG.  Small forest behind provides great protection from anything easterly.  Beautiful forests, and far enough from roads over levee to be fairly quiet.  We camped during the Kristian Gustavson 2009 “Gaining Ground” Expedition which was later chronicled in Reader’s Digest Magazine.

A small sand dune forms here along the left bank descending at the edge of a small eddy.  Good camping or picnicking on lower sandbar in low or medium water levels, and possible camp on top of dune with trees behind up to FS 35 SG.

Someone has dumped a pile of trash on the riverbank here, as witnessed in March, 2015.

A long sandy bank stretched for nearly one mile here along Hick’s Landing/Gordon Point, with possible camping and picnicking on the highest bluffs up to FS 35 SG.  The best location found in an undulating dune with inlets forming in between around mile 17 RBD.  Lots of birds in this area, songbirds in their season, vultures, hawks, crows, and bald eagles.

Coming into Bayou Point, entering the 4th bend of the squiggles, paddlers will find 2 small eddies along left bank descending around which small deposits of sand will collect in low and medium water levels.  But the best sandbars, and hence the best camping and picnicking are found around the bend.  At the bottom end of Bayou Point a tall dune emerges, with a small harbor sometimes forming, and a long declining dune running downstream.  A forest is regenerating itself in the batture along this point.  You will find nice grassy shelves dry to 35 SG with forest behind.  Good protection from north wind.  Forest camping above flood stage.  Pick your place according to your tastes!

Paddlers will notice a series of long skinny ponds, lakes, and waterholes of various sizes along the river through this section of the Atchafalaya.  Most of them are found parallel to the base of the levee.  These are the borrow pits of levee-building days, the remains of where men dug muddy sediment out of the delta here and laid it on the levee.  Men with shovels and mules did most of the work, but steam shovels helped out also.   A blue hole is a place where a hole was cut into the land during flood season.  Later when the waters dropped the hole was exposed to the air.  And later as the water remained becalmed in the hole it cleared out, and became bluish.  Or maybe the hole was blown out of the mud.  Either way, this is a blue hole.

There are a couple of small shelves of sand found right bank descending near mile 20.5 that would make a good camp for a small party.

The river curves gently eastward and then southward in several long meanders here, with plenty of good pickings for stop places in low water but few in high water.  The best include a small sandbar across the river from Barberton Landing at 23.2 LBD, and an interesting bar and inlet at Elba Landing.  Bayou Rouge follows alongside to the west, and Johnson Bayou to the east.

Cellular tower found over the levee near mile 22 over the West Bank.

A thicket of Chinaberries is found behind this small hump of sand.  Possible camp or picnic site up to 30SG.

A tall bluff of sand forms here in an alcove of an eddy across the river from Barberton Landing at 23.2 LBD, possibly dry up to FS 35 SG.

Best Campsite Yet!  The river has carved an interesting landscape at Elba Landing, a collection of humps and depressions which create a rich topography for wildlife, and the best camping yet on the Atchafalaya River.  Dry up to 34SG.  Long flat shelves with plenty of room for exploring, birding, tracking and beach-combing.   Sometimes sandy, sometimes muddy, depending on the previous highwater.  Great camping at medium or high water levels, but sometimes gooey along the river at lower levels.  Make landing and climb up the dunes to clean sand above.

Small bluff of sand forms here and stay dry up to 35SG.

A broad sandy shelf overgrown with grass is found here, with good camping or picnicking up to FS 35 SG.

Three miles above Melville, as you paddle along, you might notice a large bay of water left bank descending just past mile 27.  This is the Point Coupee Drainage Structure, which controls the outflow of Bayou Latenache.  When the Morganza Floodway was built there was a drainage problem.  All of the water above the floodway had nowhere to go.  So in 1954 the Corps built a Pumping Station to lift water over the Atchafalaya Levee to drain all of the rural lands north of the Floodway in between the Atchafalaya and the Mississippi.  A small sandbar forms at the north end of the bay mouth that would make a small but good camp or picnic in low water. 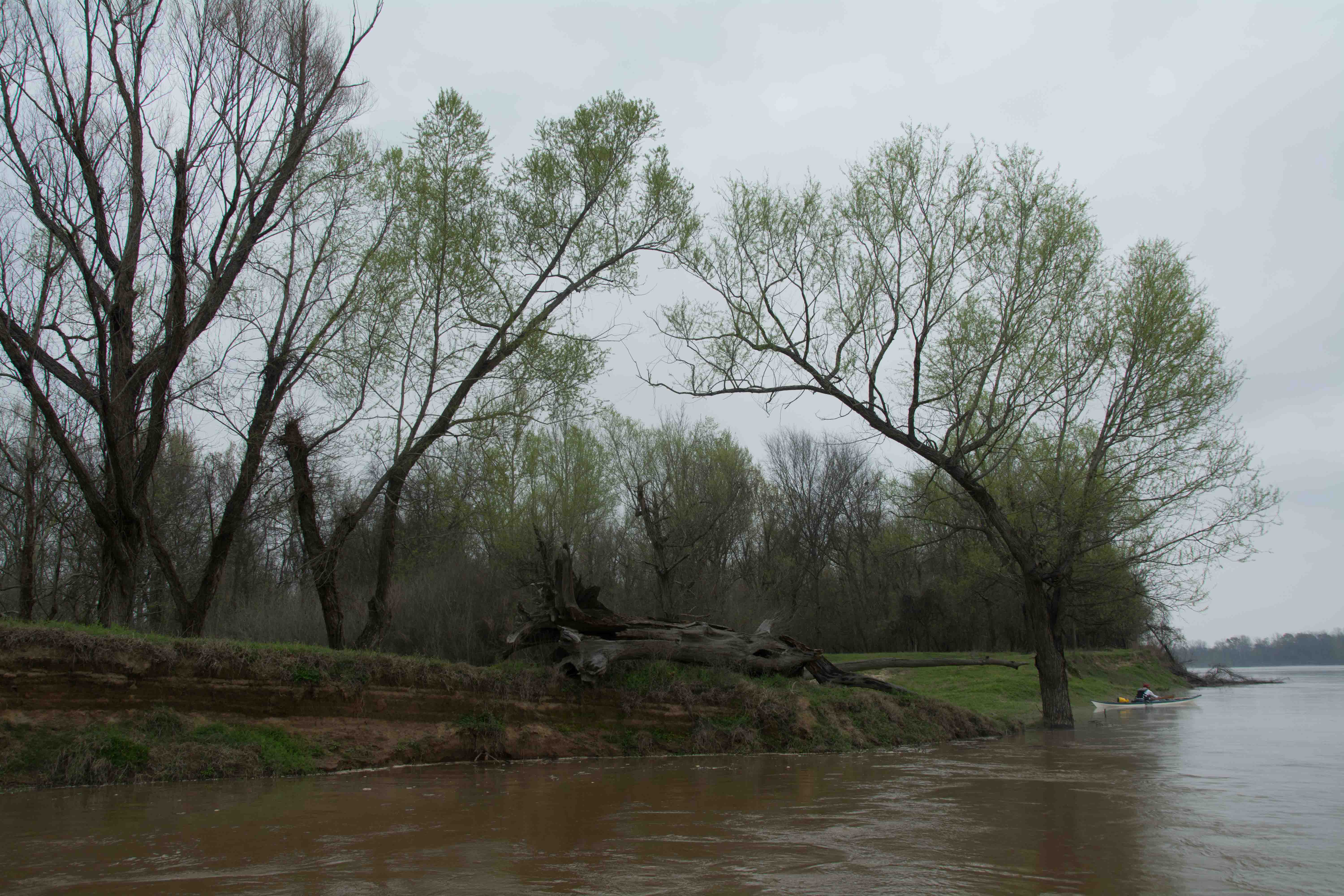 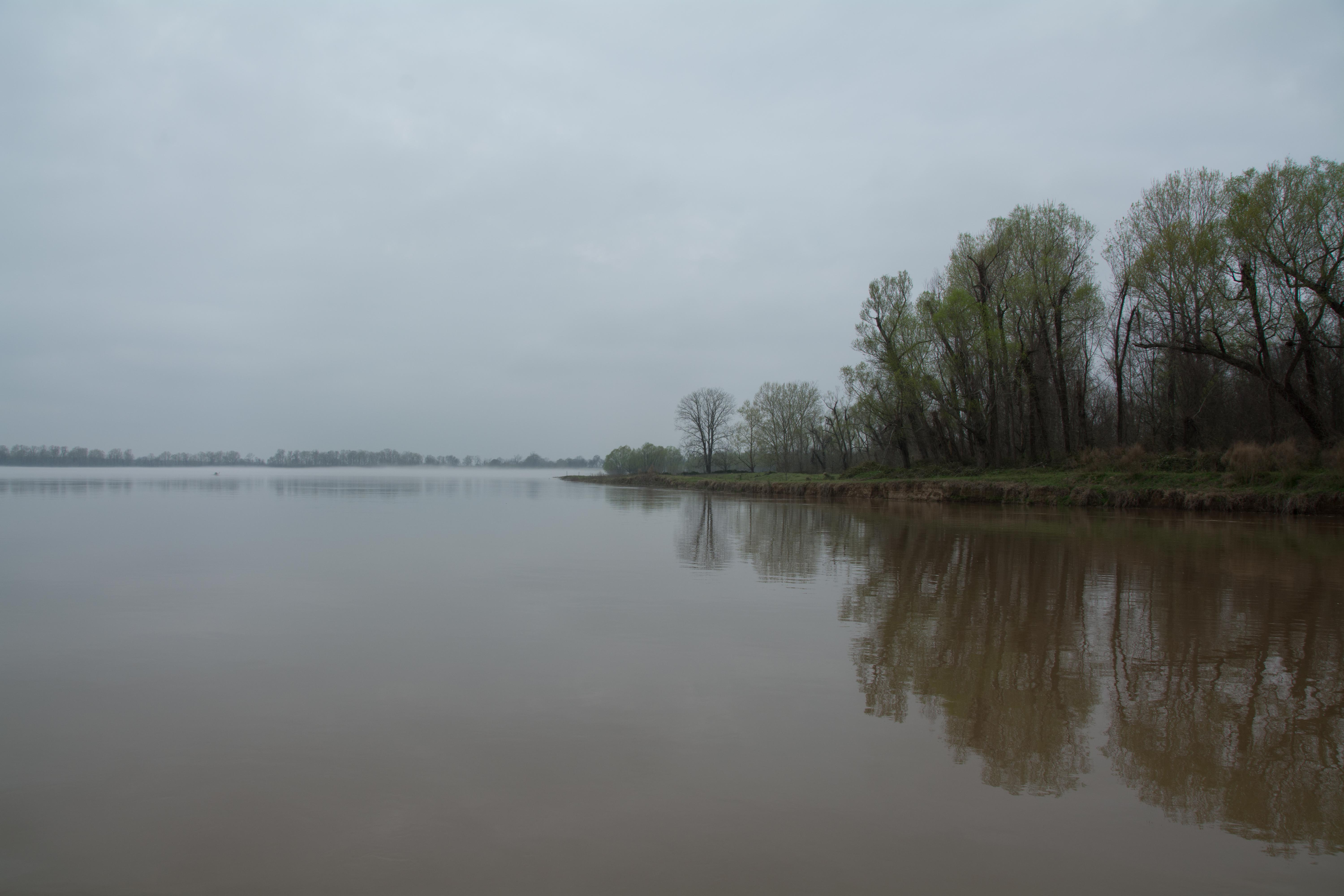 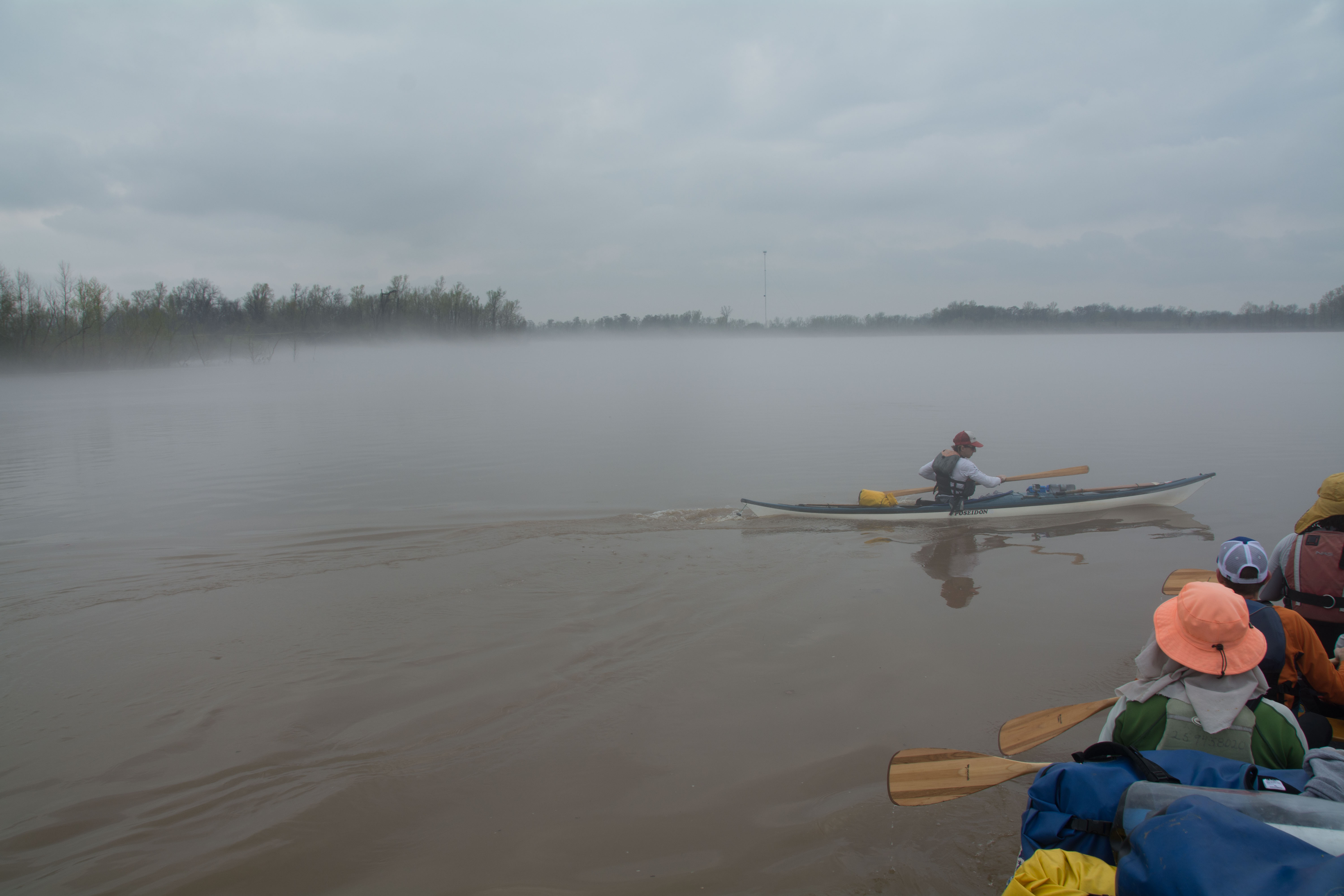 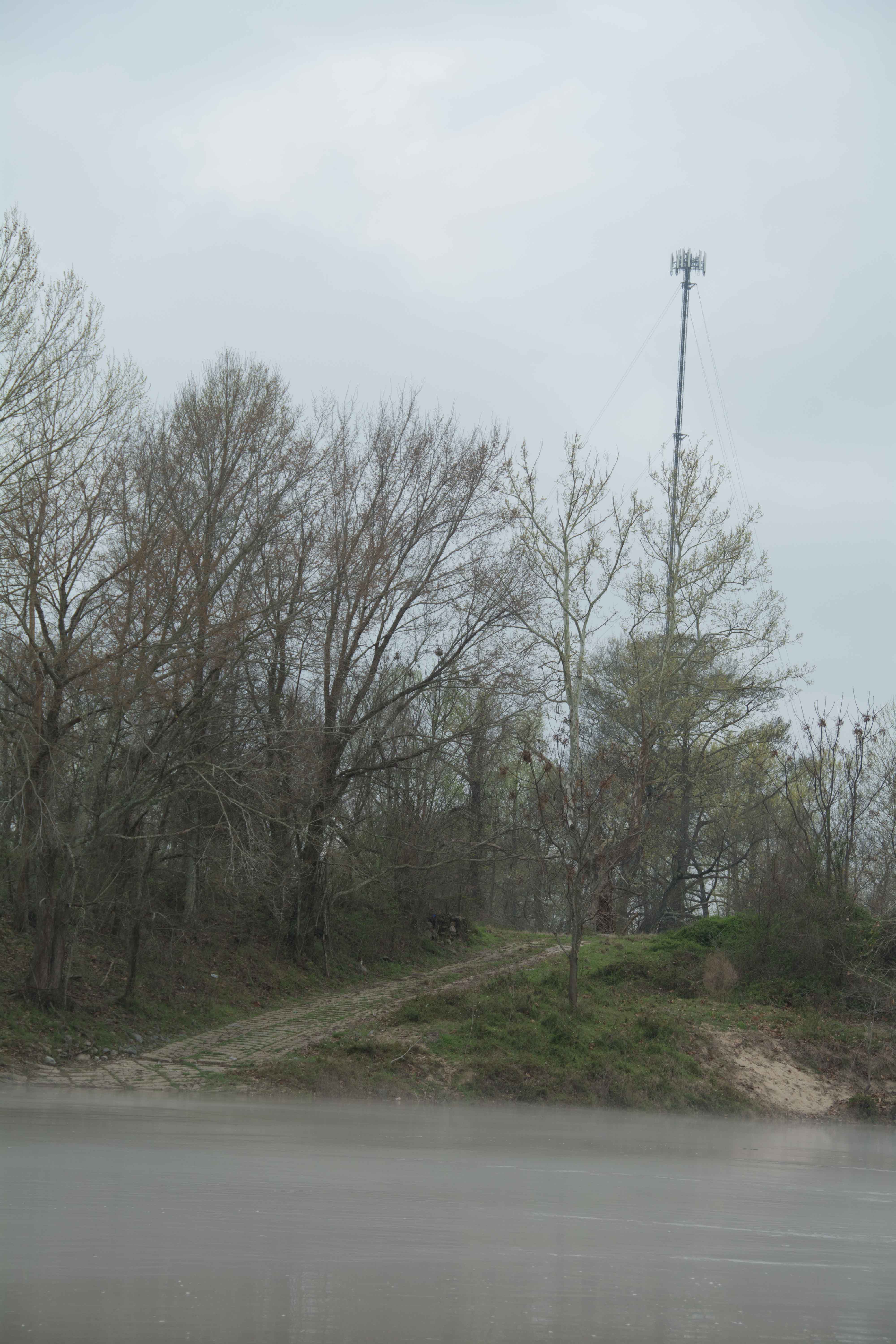 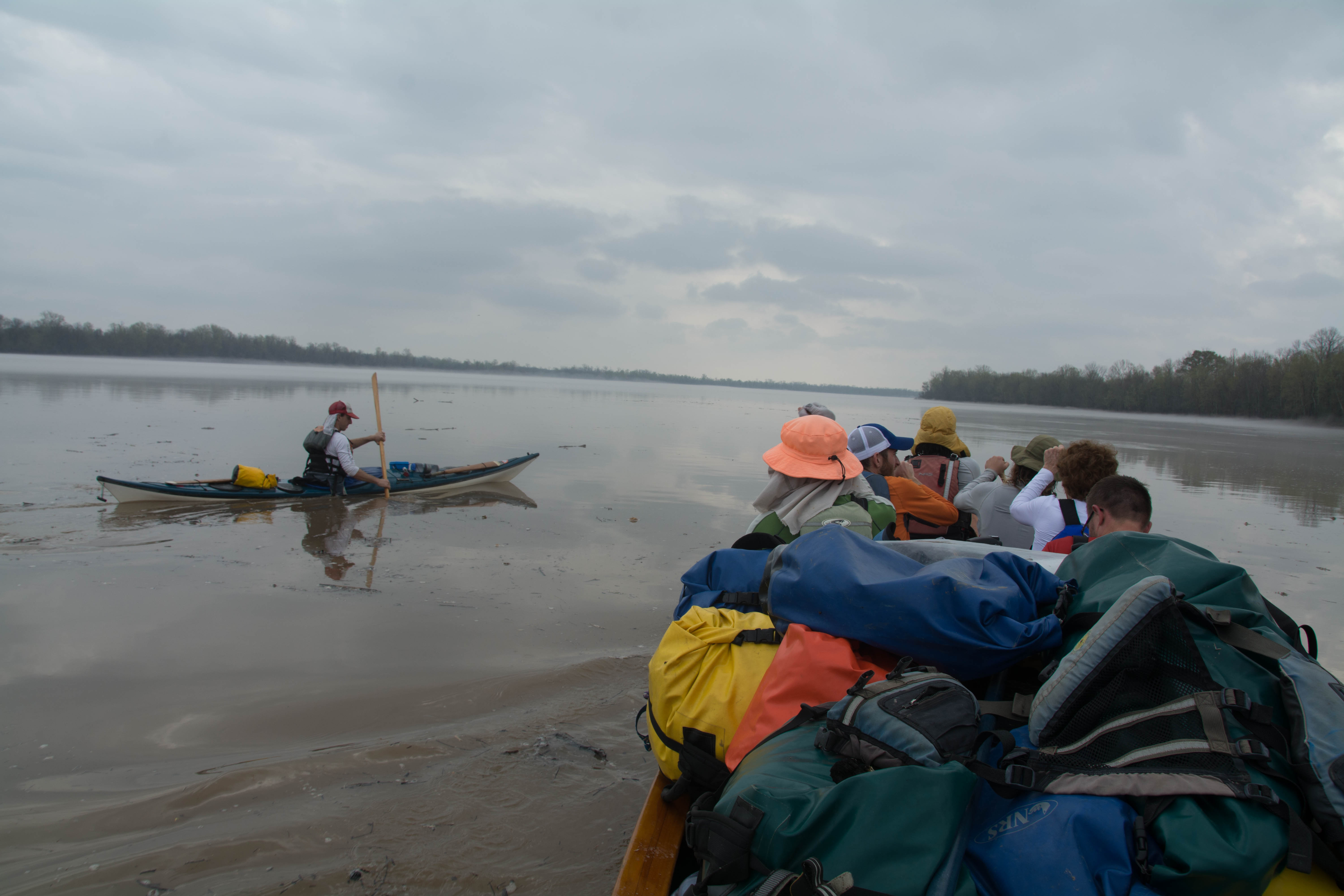 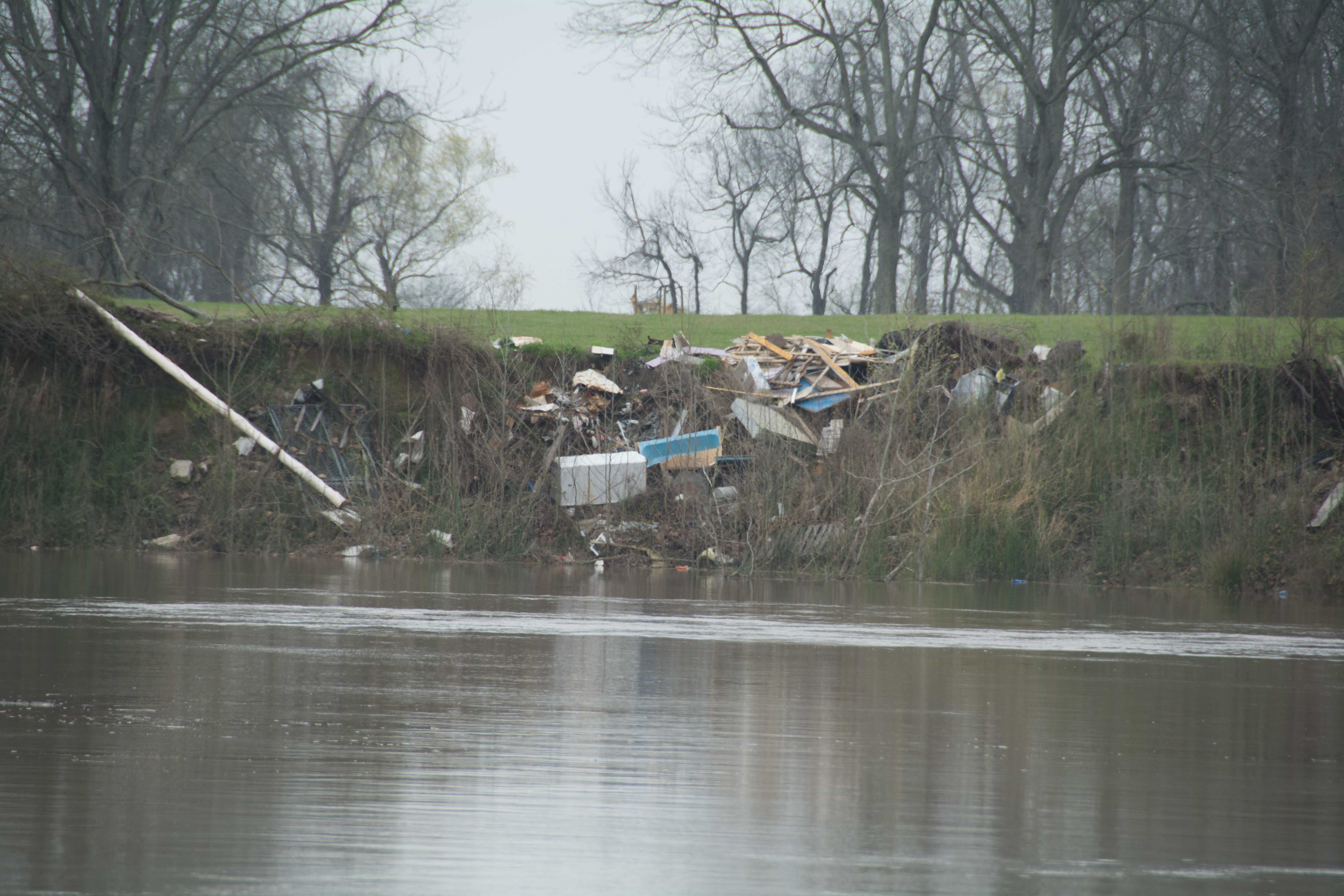 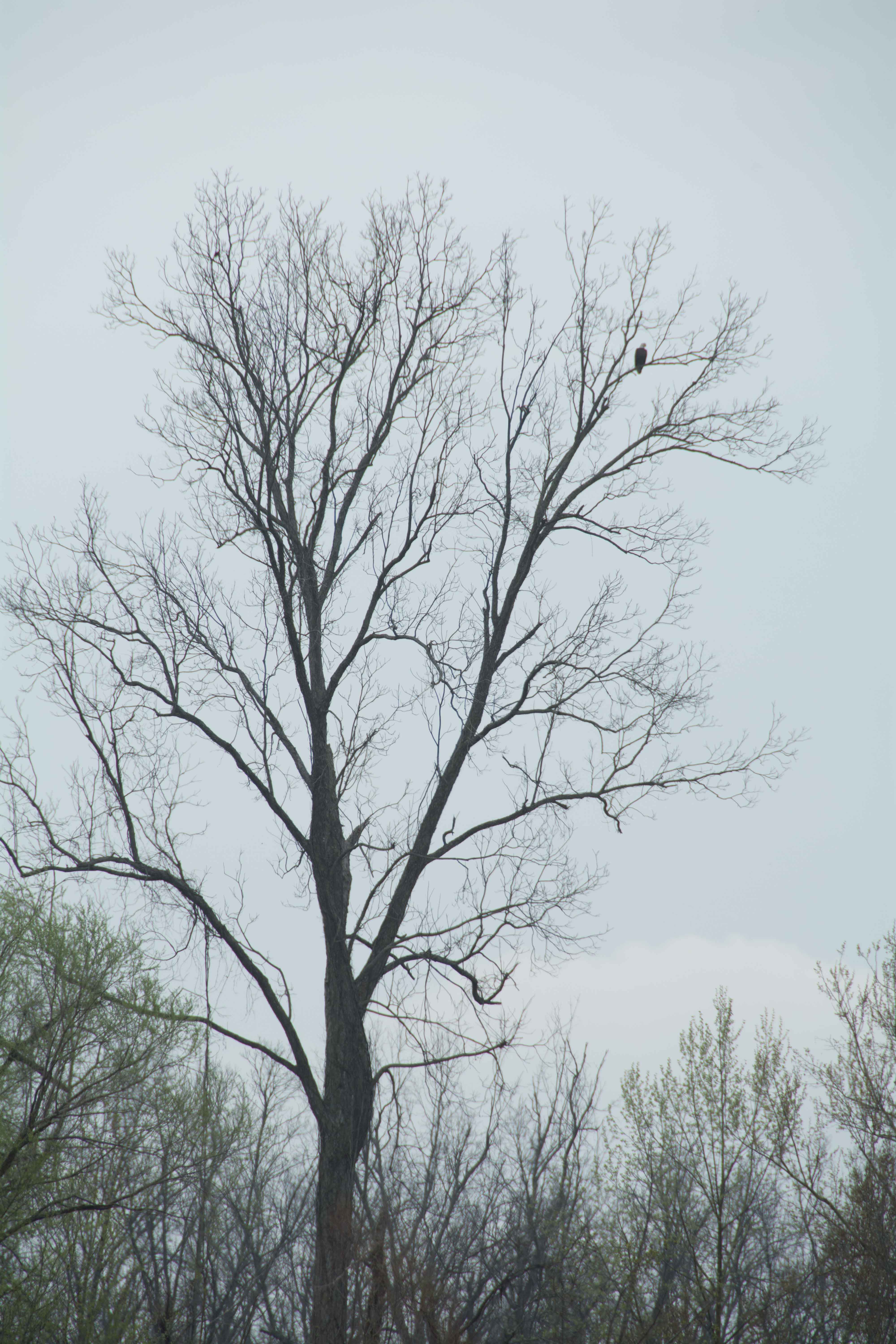 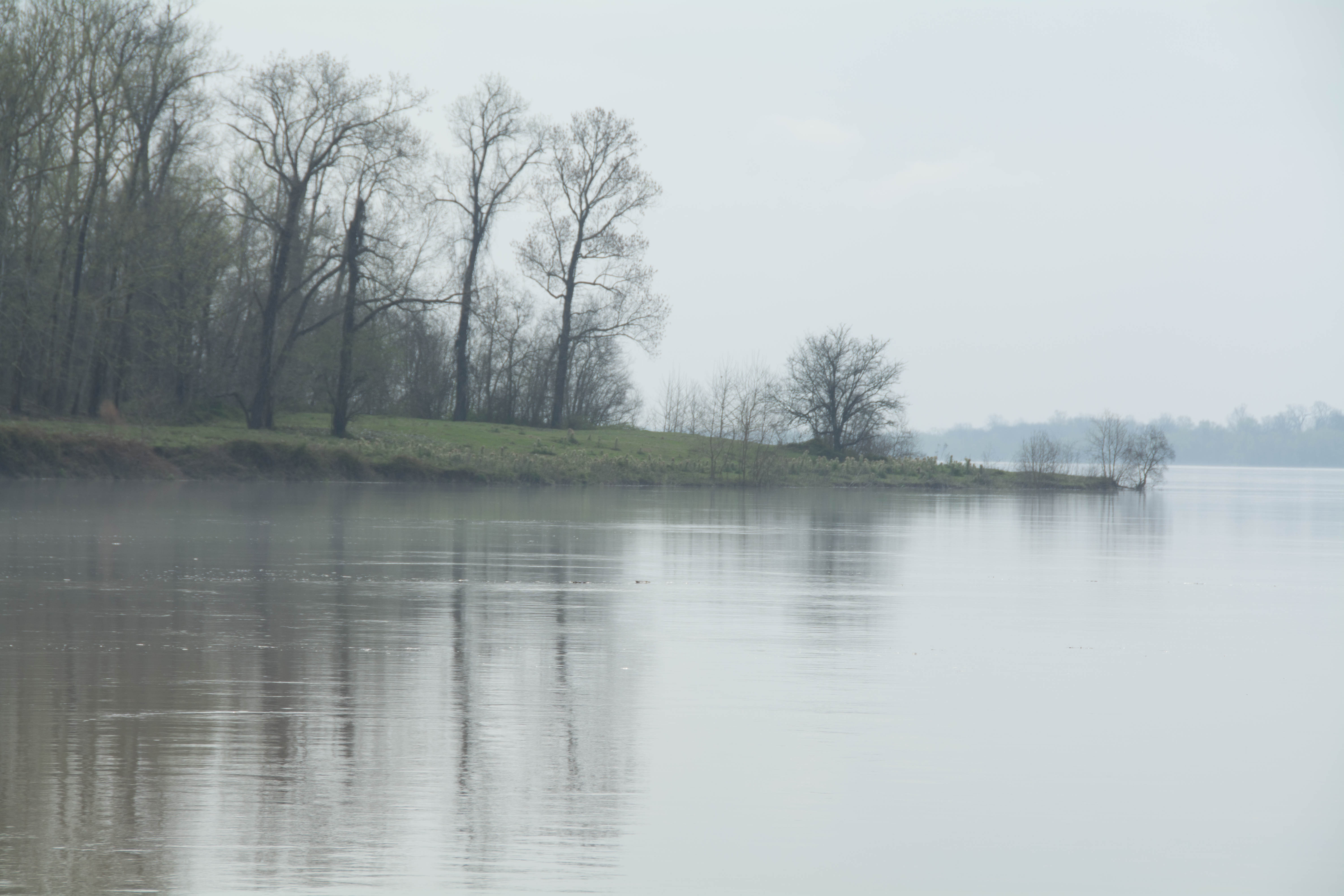 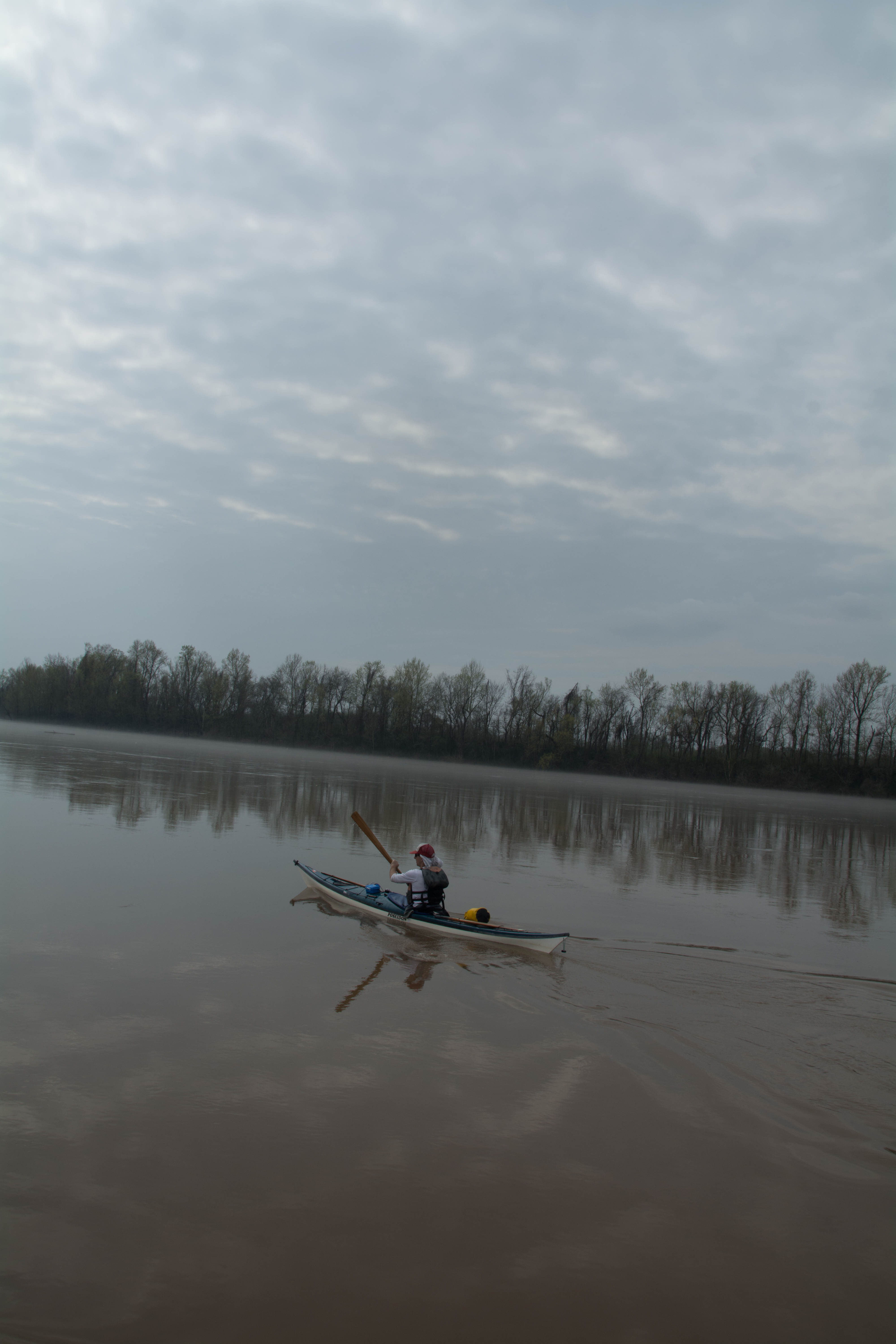 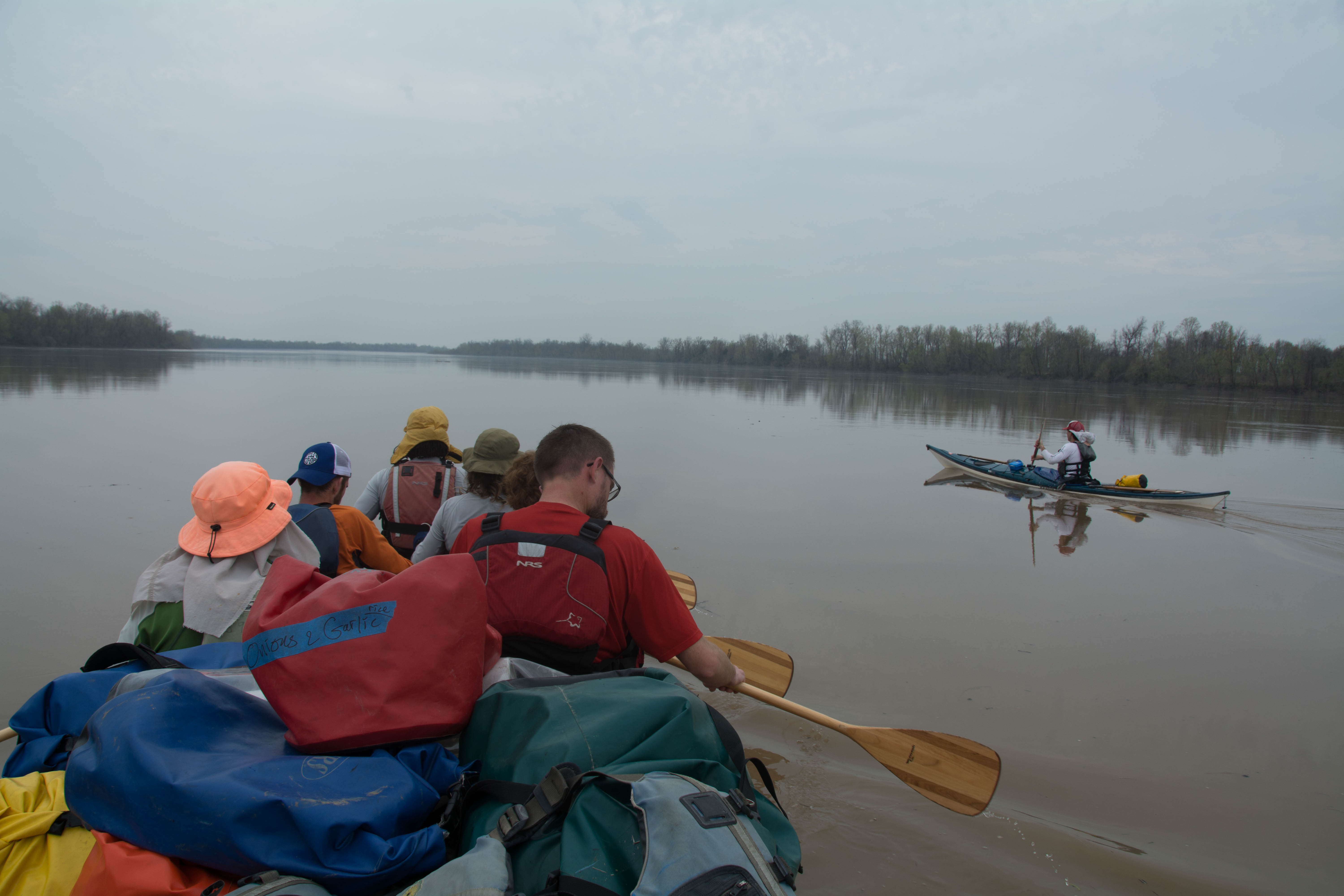 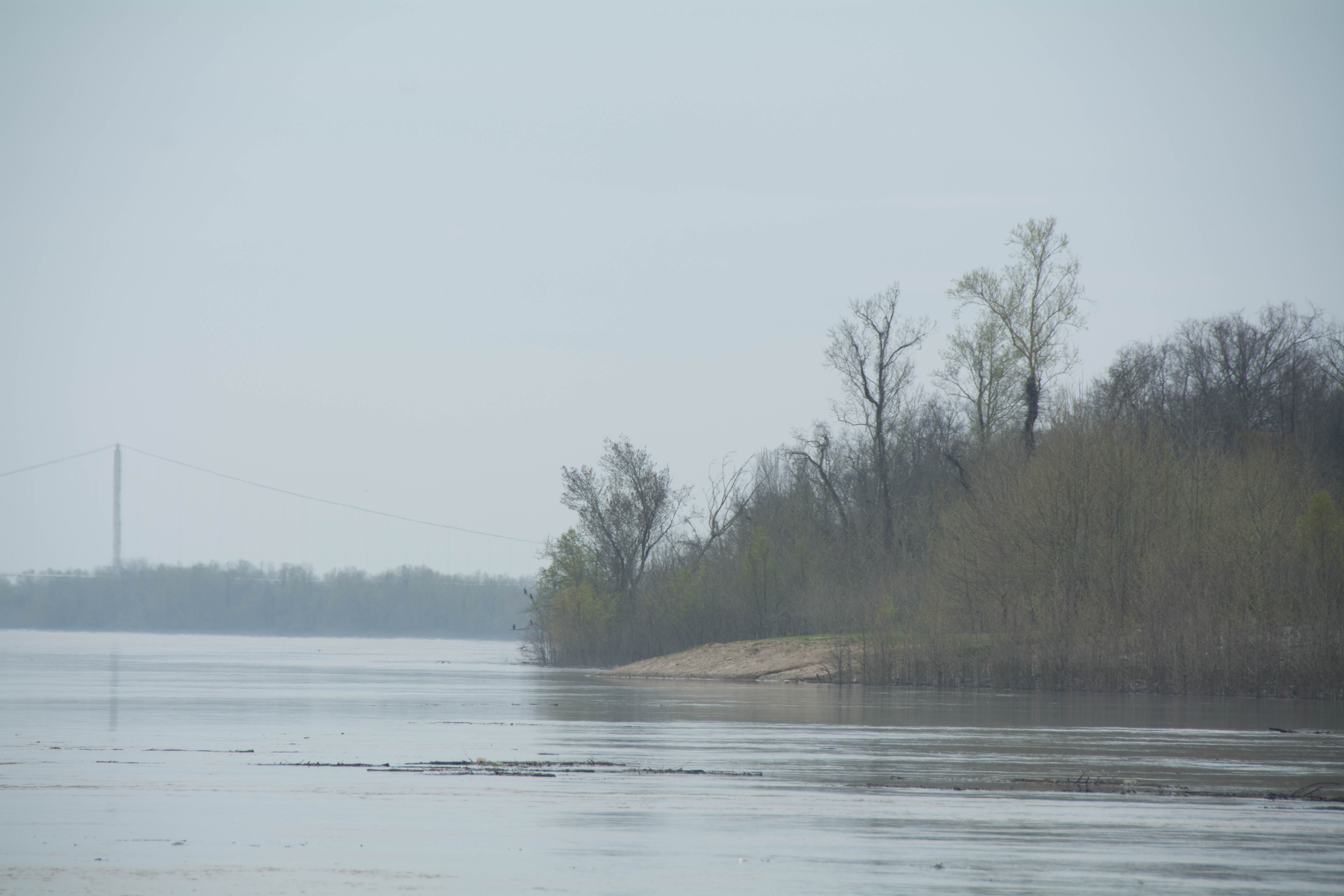 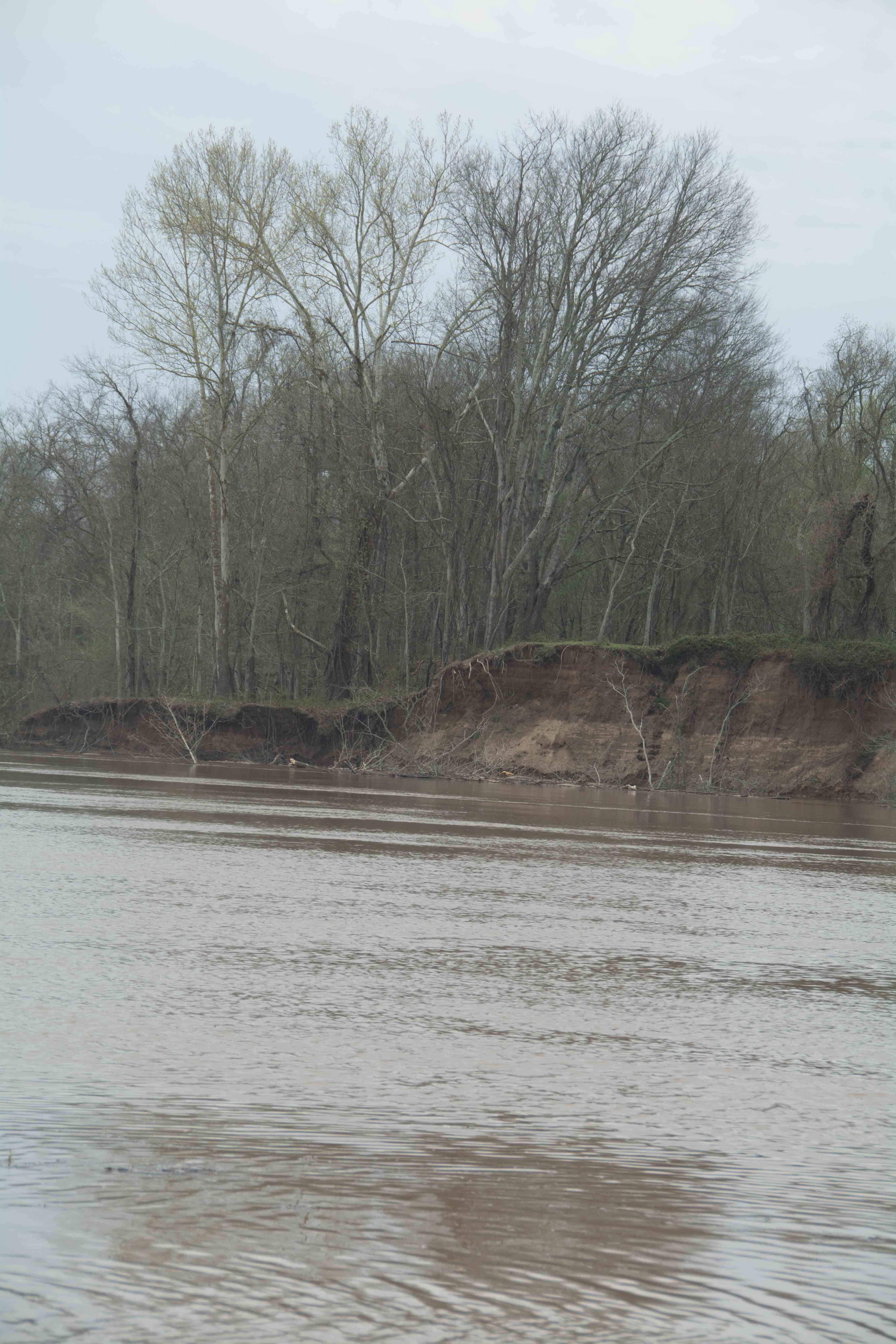 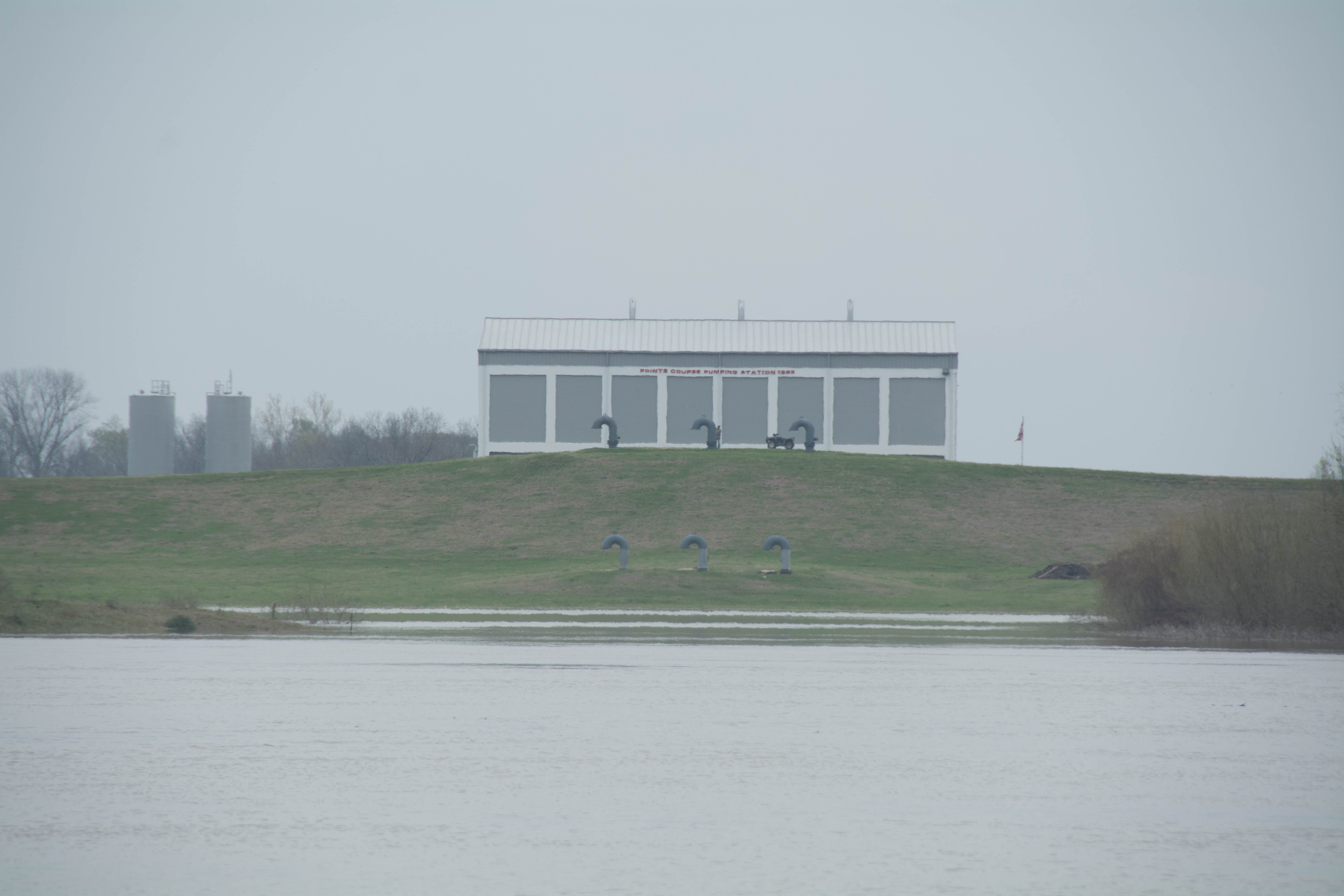 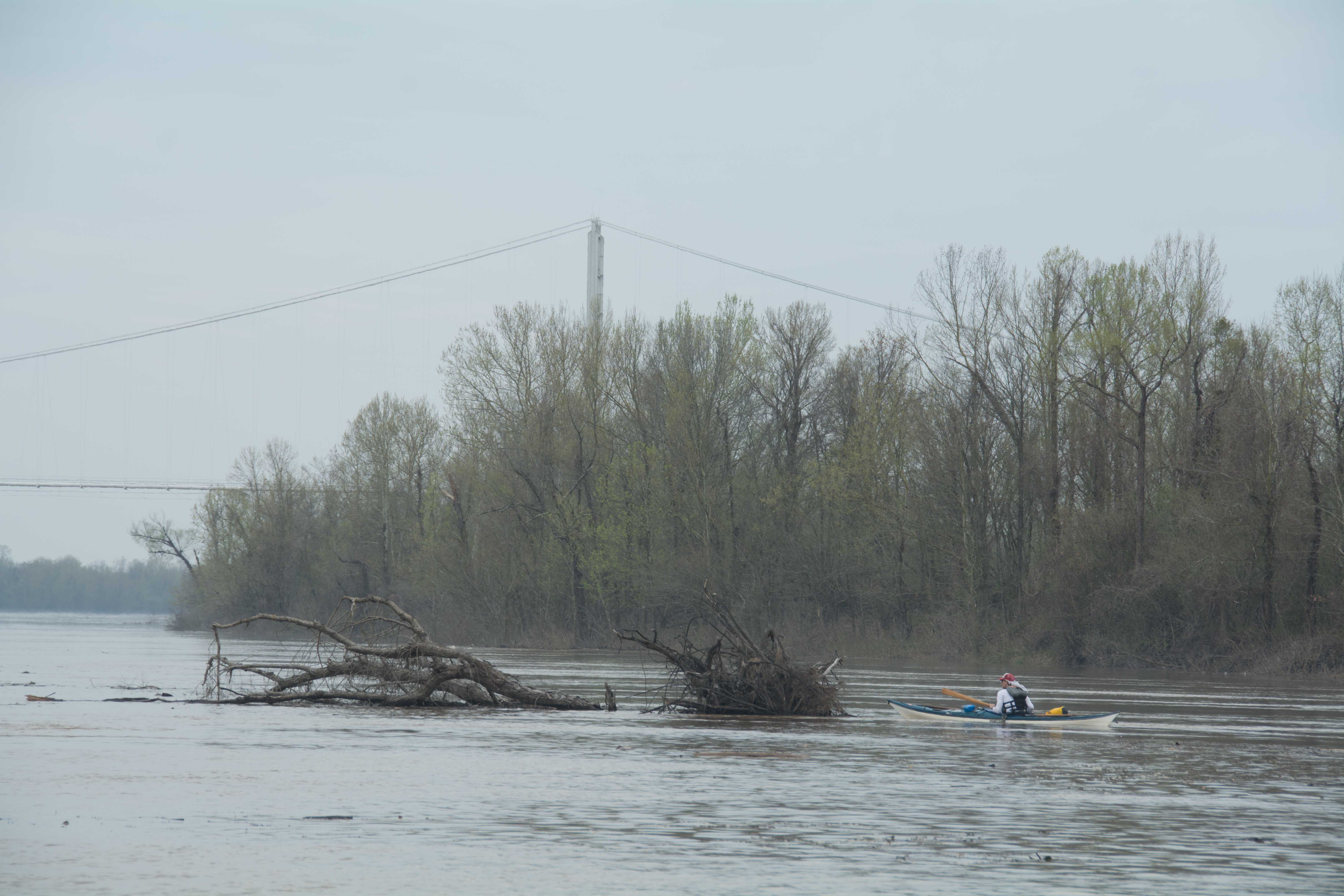