The Morganza Floodway begins here and creates the east bank of the Atchafalaya River dozens of miles downstream into top end of the cypress-tupelo gum forests that form the central body of the largest river swamp in North America, the river of trees.

There is nothing to see from the river.  But for an interesting side trip, paddlers can pull into the bay at Bayou Latenache and make a stop.  After securing your vessel, climb the levee.  Look out out over woods and fields beyond.  The Mississippi River is only six miles away at this point, looking almost due east.  Paddlers can imagine up to 600,000 cfs flowing through these woods during times of catastrophic flood waters.  This would be necessary only in the highest of floods, and would signify that all of the gates were open at the Morganza Spillway, and draining water from the engorged Mississippi at Morgan’s Bend.  Morgan’s Bend is a 180 degree bend of the river 15 miles above St. Francisville.

The US Army Corps of Engineers added this floodway and overflow valve in the 1950s to divert water from the Baton Rouge New Orleans stretch of river, whose levees can only handle up to 1.5 million cfs (cubic feet per second).  To protect the Louisiana Delta during high water, the Army Engineers allow up to 620,000 cfs to pass through the Old River Control Structures.  If more the river rises to above 2.2 million cfs the Morganza Floodway is opened.

Since its completion in 1954, the Morganza Spillway has been opened twice (in 1973 and 2011), and considered for opening during four other major floods of the Lower Mississippi River.   The gates opened for the first time on April 17, 1973, in order to lower the water level of the Mississippi River and relieve pressure on the Old River Control Structure.  The Corps of Engineers opened 42 of the 125 steel gates, allowing about half of its maximum designed flowrate to pass from the Mississippi into the Atchafalaya Basin. The spillway received minor scouring and slight damage to the stilling basin, and substantial flooding occurred in the Atchafalaya Basin. After the 1973 flood, the structure was restored to its original condition.

The Morganza Spillway was opened for the second time during the 2011 flood as waters rose higher and higher up the levees protecting New Orleans and its citizens, who scurried like mice up and down St. Charles underneath the looming presence of the cold brown water and the freighters floating by on it.  A big pile of boulder-sized rocks was placed here recently (in 2014), probably as a means to better secure this useful drainage flood tool from eroding the riverbank in future flood years.

The second opening of the Morganza Spillway began with the lifting of a single floodgate on May 14, 2011. Diversion of 125,000 cubic feet per second (cfs) of water from the Mississippi River to the Atchafalaya Basin was planned during this event, with the structure operating at about 21% of its capacity. This diversion was deemed necessary to protect levees and prevent major flooding in Baton Rouge and New Orleans, with the tradeoff of creating possibly severe flooding in the Atchafalaya Basin.

By May 18, 2011, a total of 17 gates (the largest number for the 2011 event) had been opened by the Corps of Engineers. The Corps estimated the flow rate at 114,000 cfs. However, on May 25, new estimates from the United States Geologic Survey (USGS) described a much higher rate of 172,000 cfs, resulting in the closure of 3 bays by May 26, and additional closures by May 29, bringing the total to 11 bays with an estimated diversion rate of 120,000 cfs.  The Corps continued to evaluate the flow and close additional bays as appropriate. By June 6, the number of open gates had been reduced to seven, and by June 8, only two gates were still open.  All bays were closed on July 7, 2011.

The Corps had estimated that it would take opening one-fourth of the spillway’s 125 bays — or 31 bays — to control the flow of the river through Baton Rouge in response to a forecast crest of 45 feet anticipated on Tuesday, May 17, 2011, which must remain below 1,500,000 cfs of water per second through Baton Rouge to ensure the integrity of the levee system. Since Morganza never operated above 172,000 cfs, the flooding in the Atchafalaya Basin was considerably lower than had been anticipated during the initial estimates of 300,000 cfs.  By May 29, the Corps had also opened 330 of the 350 bays of the Bonnet Carre Spillway located near New Orleans.  (Wikipedia)

Sometimes oil companies construct a pipeline crossing to go over the river rather than the normal under the river, as is the case here at mile 28.2 with this pipeline bridge built by Transcontinental Gas Pipeline Corp.

Watch for strong currents and powerful hydraulics around this bridge, especially in highwater.   Tows have to maneuver through a narrow 180 foot opening between the two central towers at the Melville Railroad Bridge, which is an extreme navigational challenge.  Try to give any approaching tows plenty of room to move around.

A broad gravel paved opening affords plenty of room for paddlers to come in and make a stop here at the old Melville Ferry Barge Landing.  Primitive boat ramp.  Rough gravel incline drops into river.  No concrete.  Party place, and popular fishing spot.  Camping not recommended.  Don’t leave your vessel unattended.   Melville is considered the “catfish capital” of the Atchafalaya River. Some locals reminded us we were crazy like them for paddling the river. One lady claimed she lost two brothers to the river. I wanted to ask if they were wearing floatation devices, but restrained. I noticed that many were not wearing them in their fishing boats.   (Mark River) 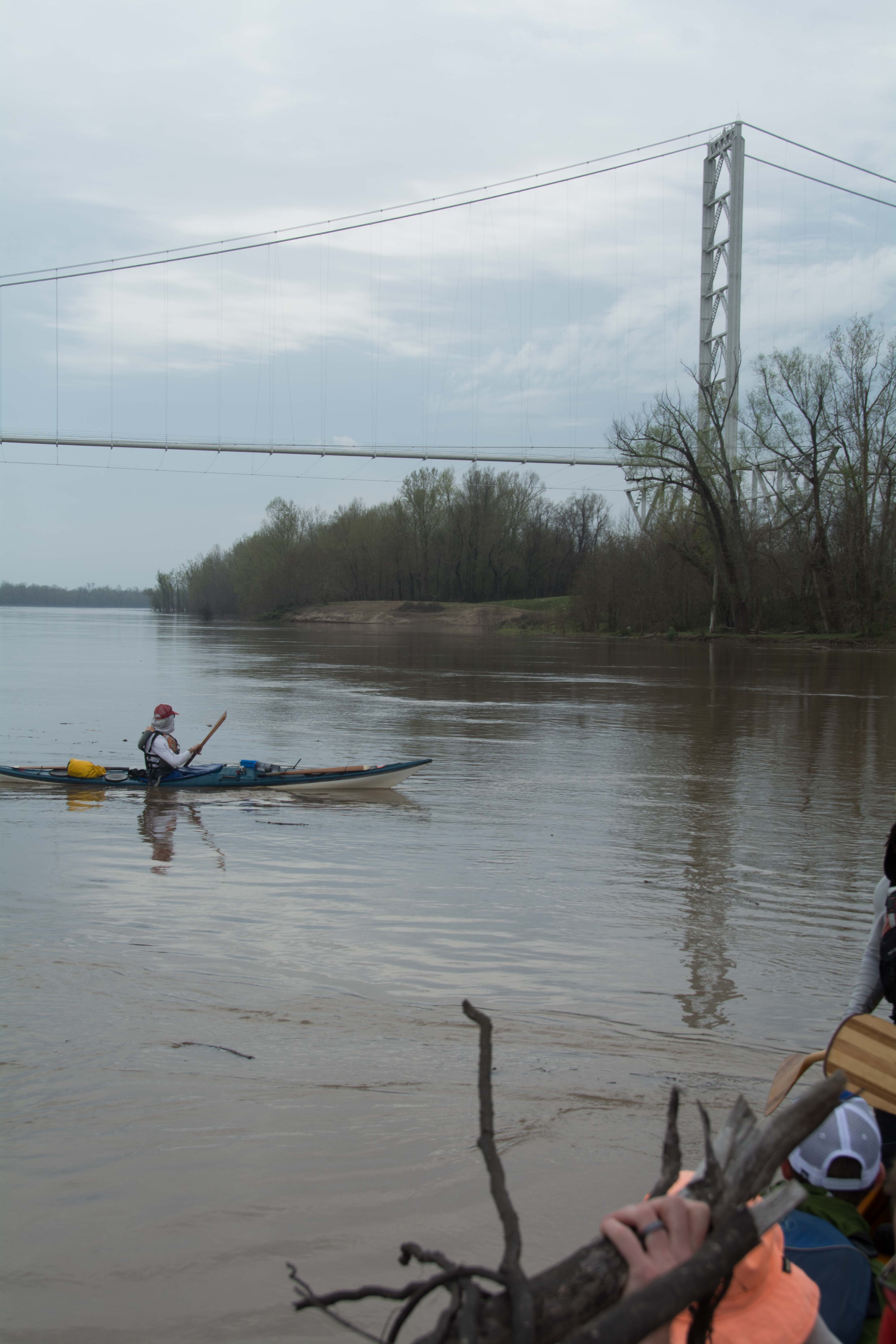 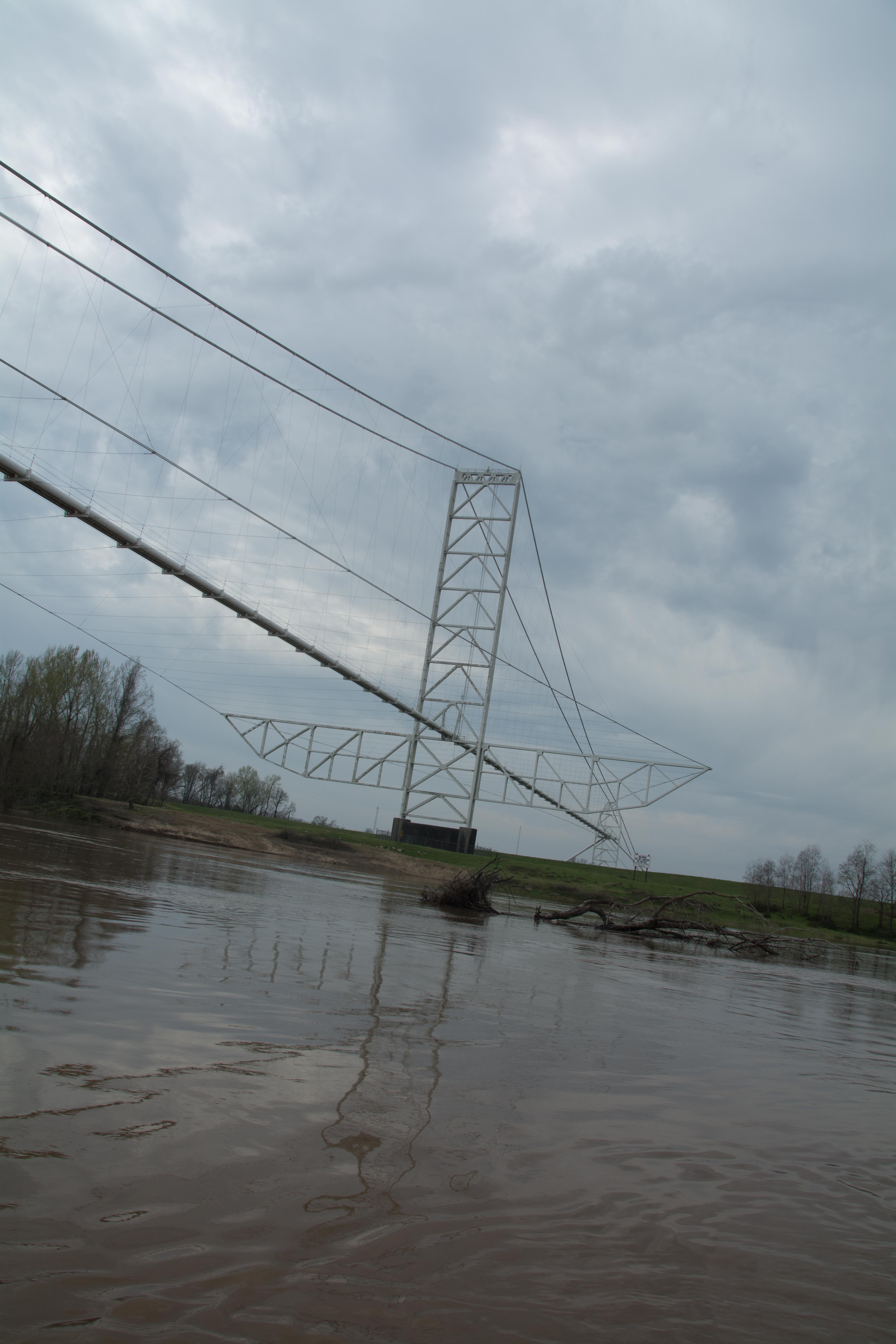 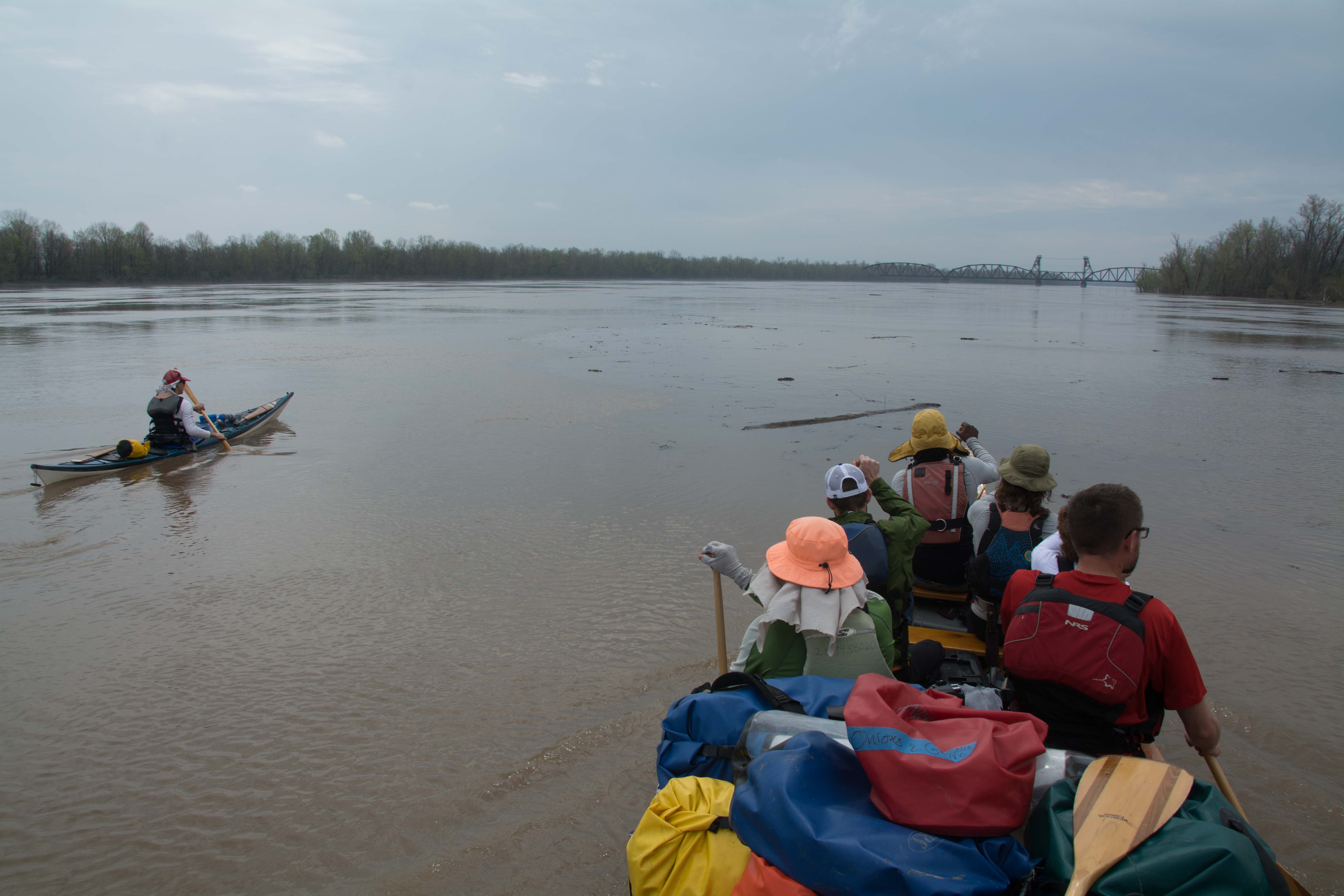 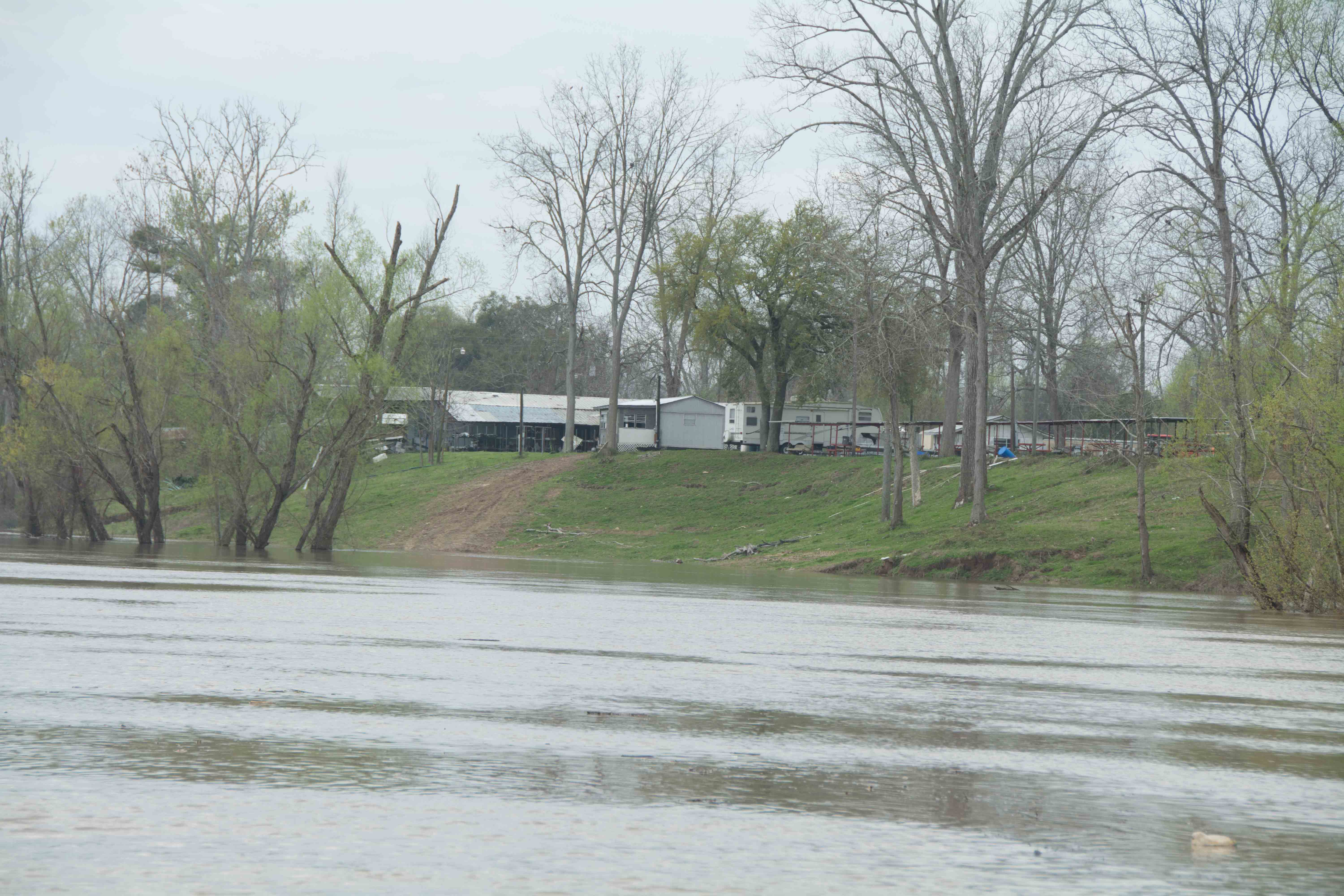 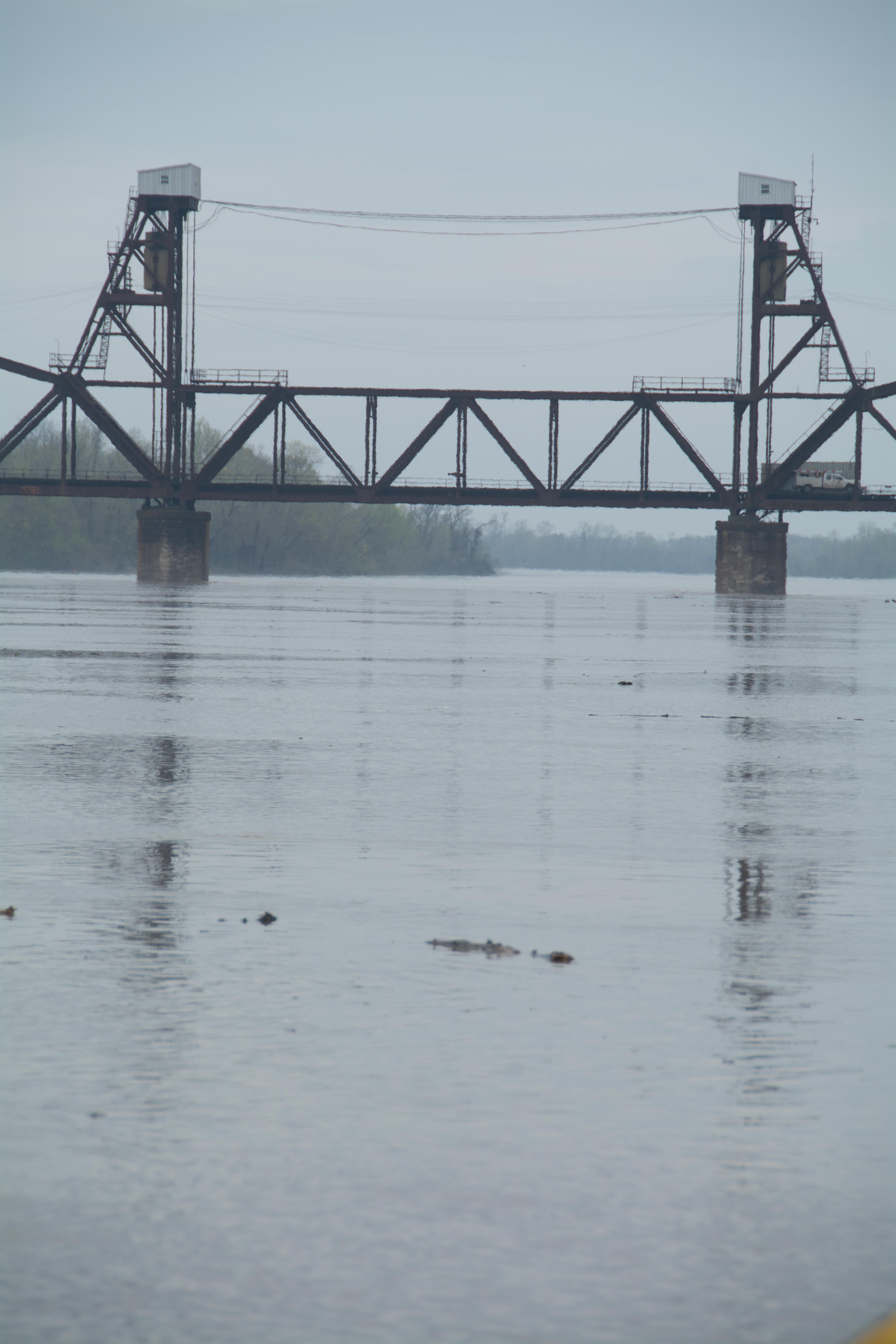 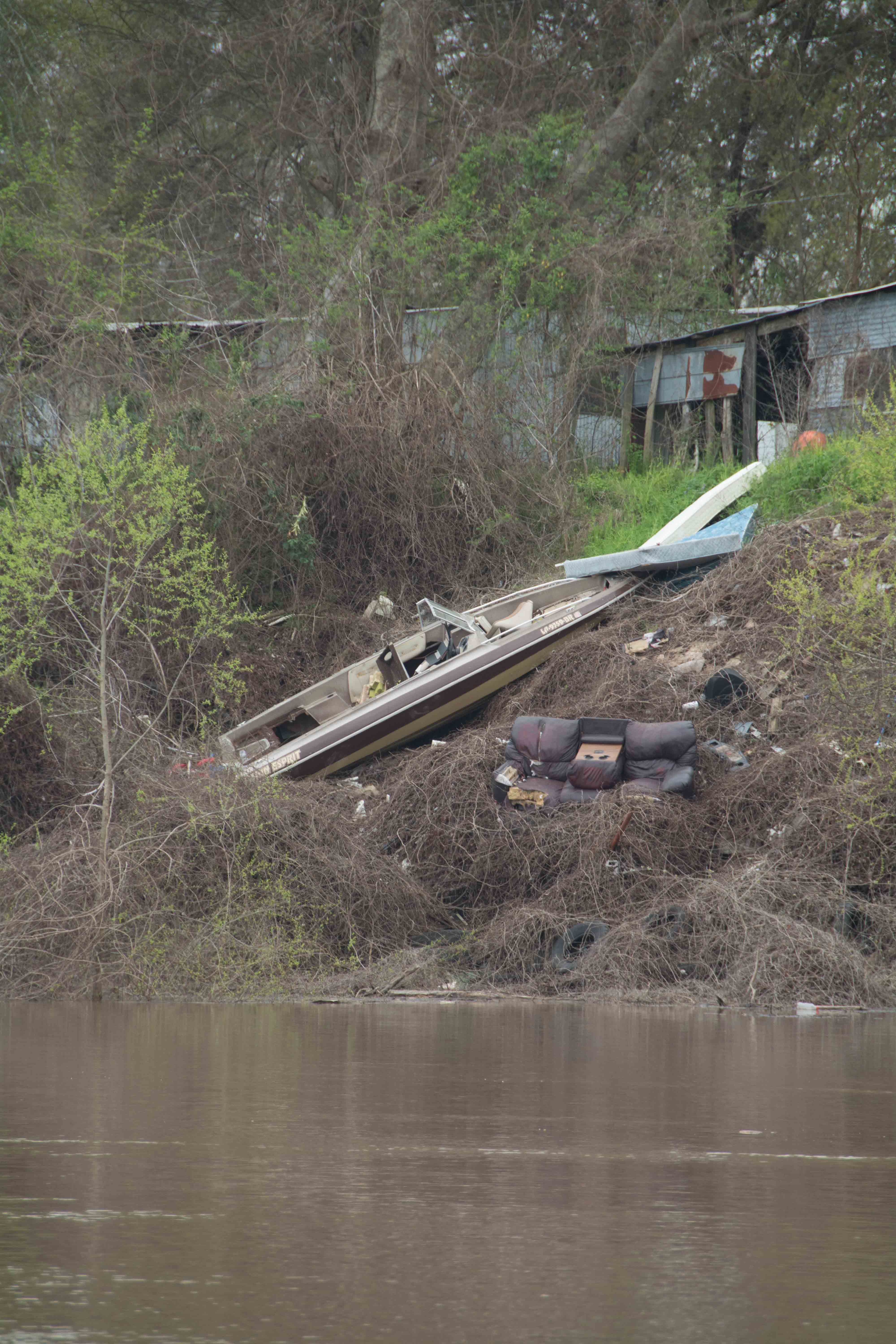 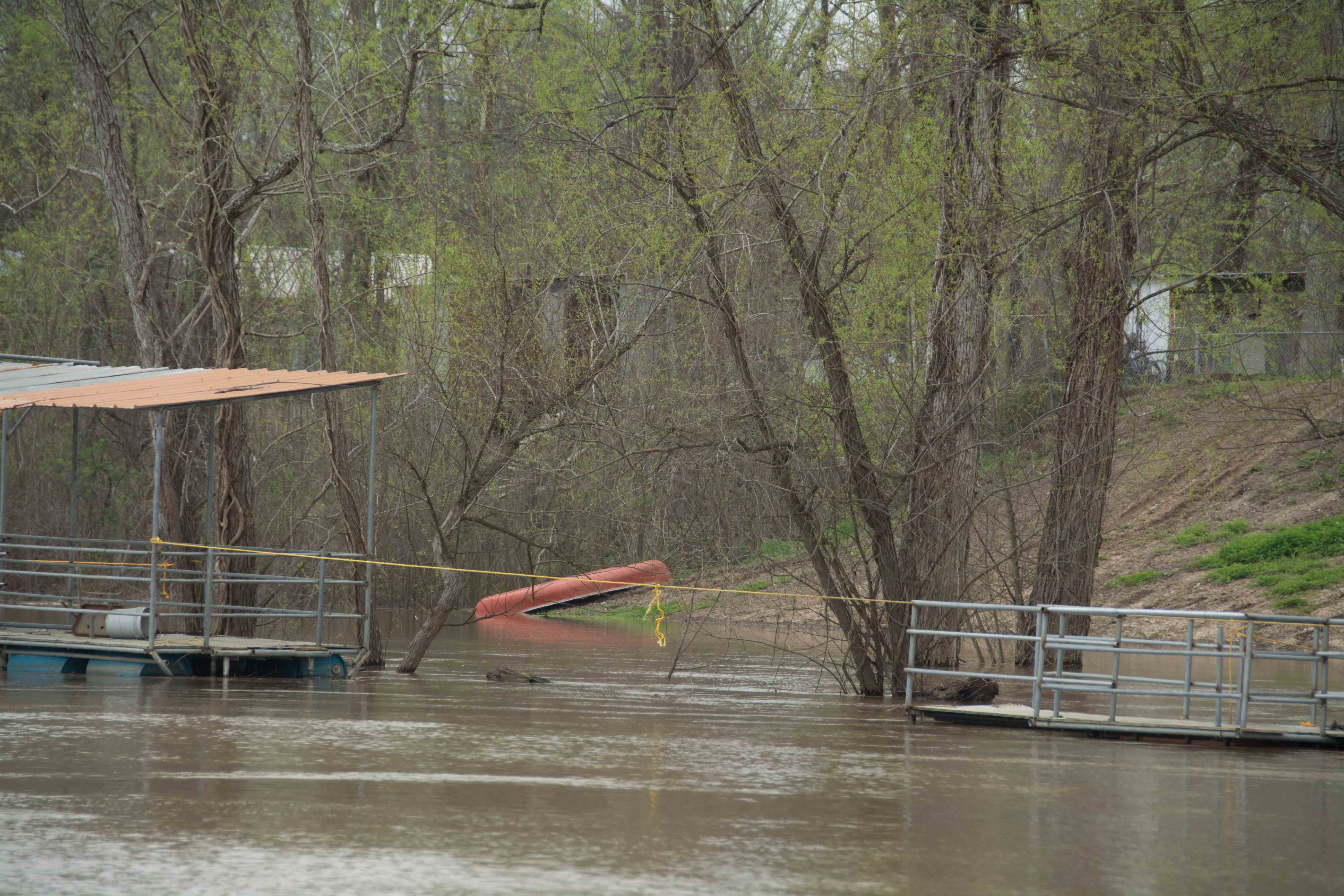 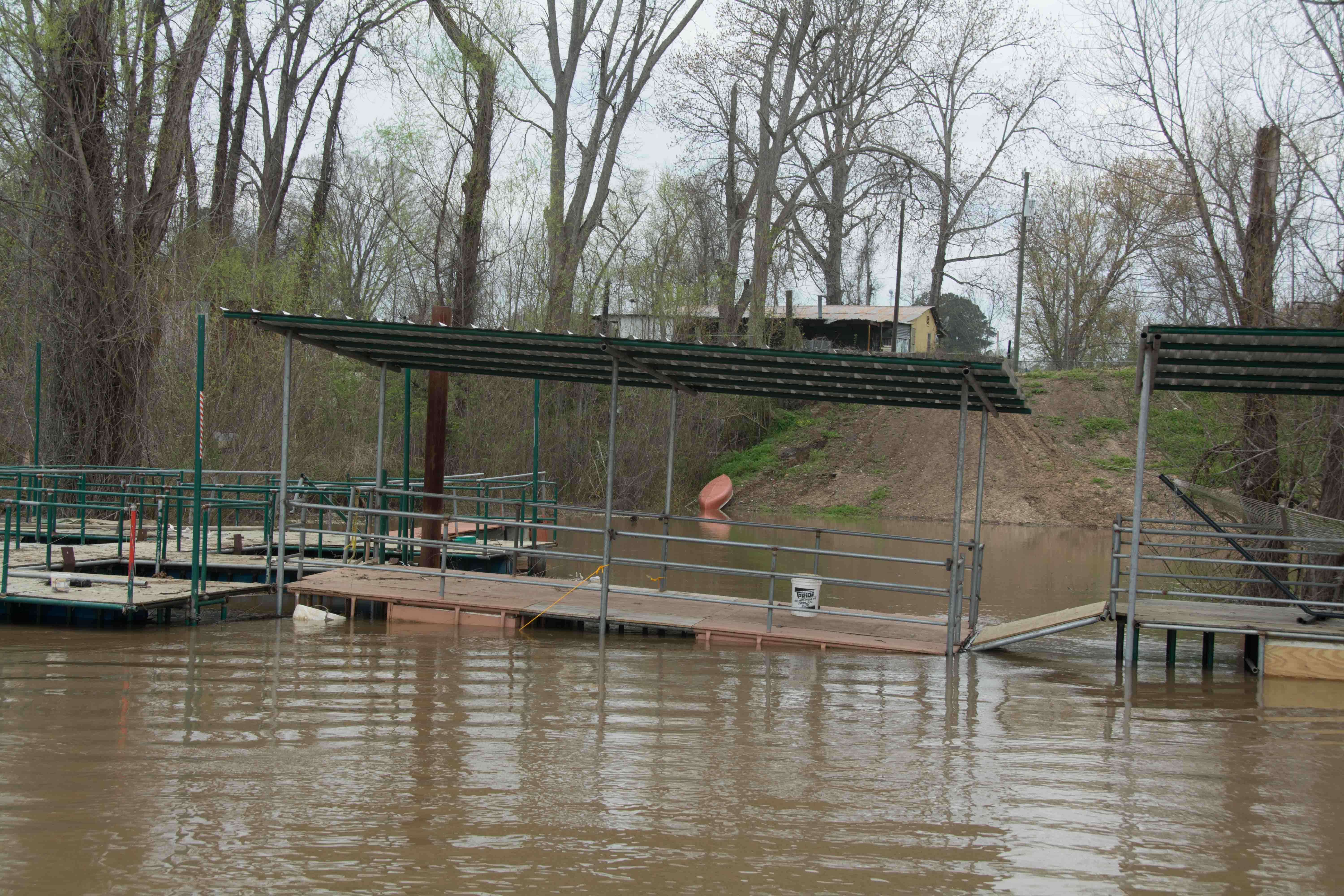 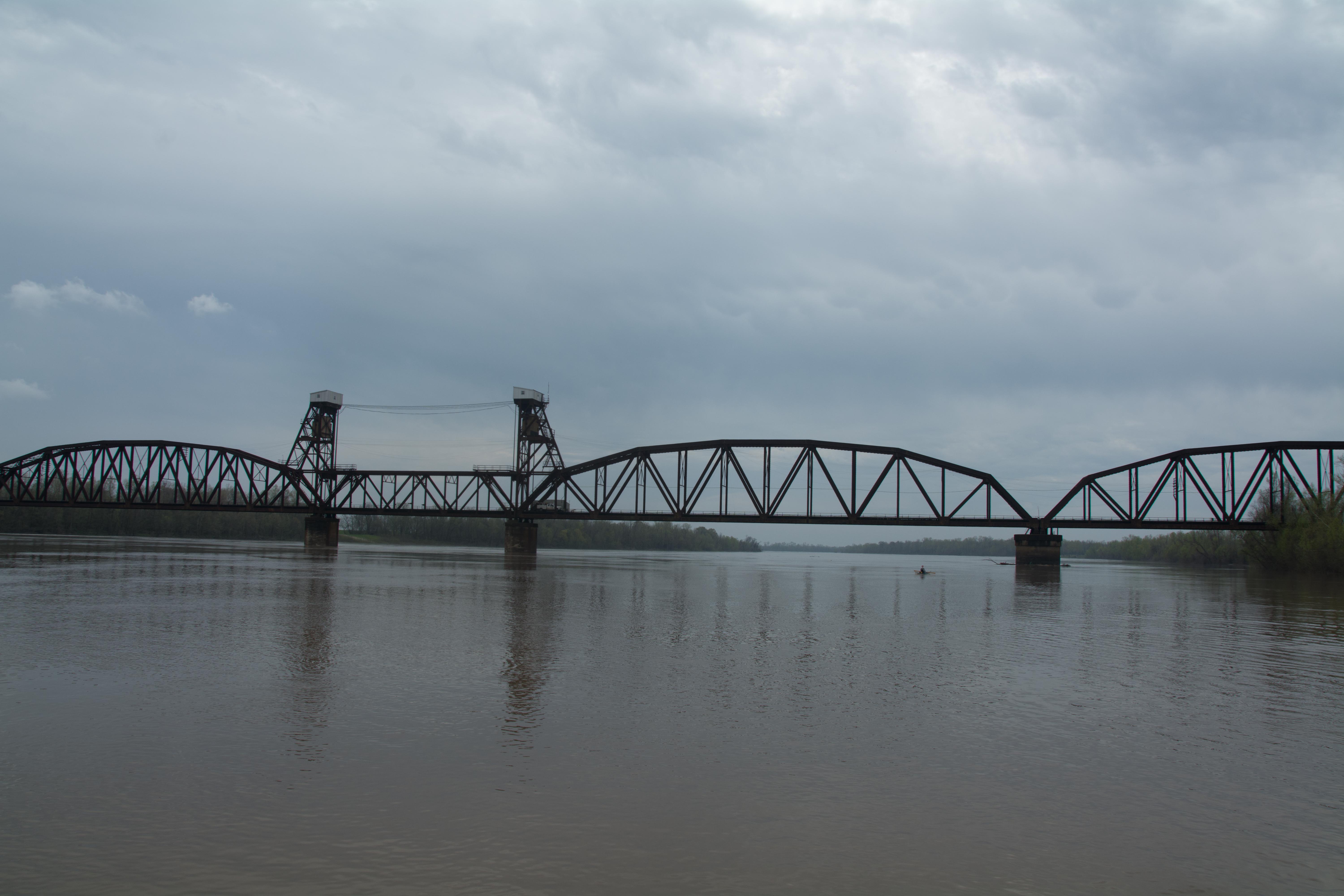 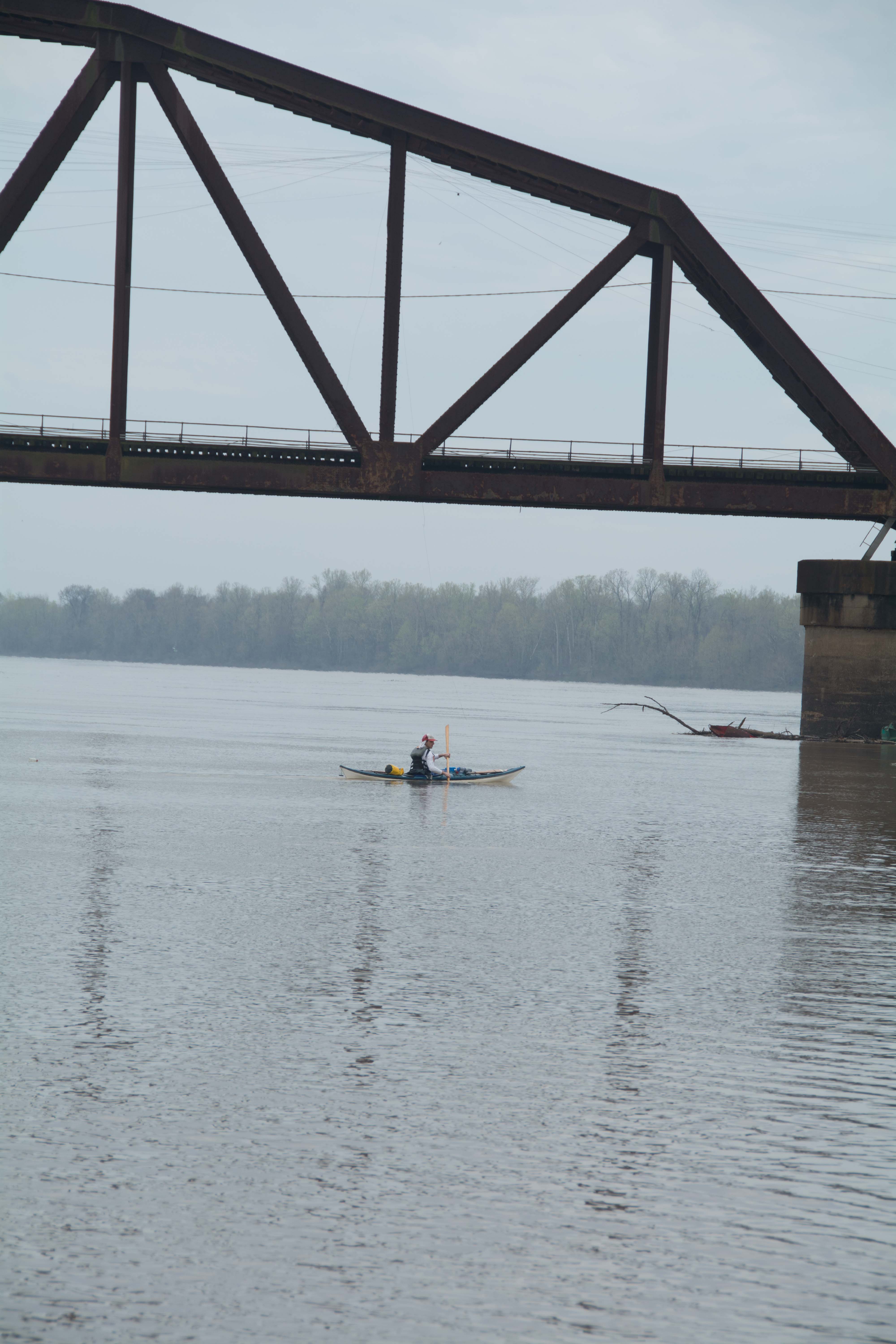 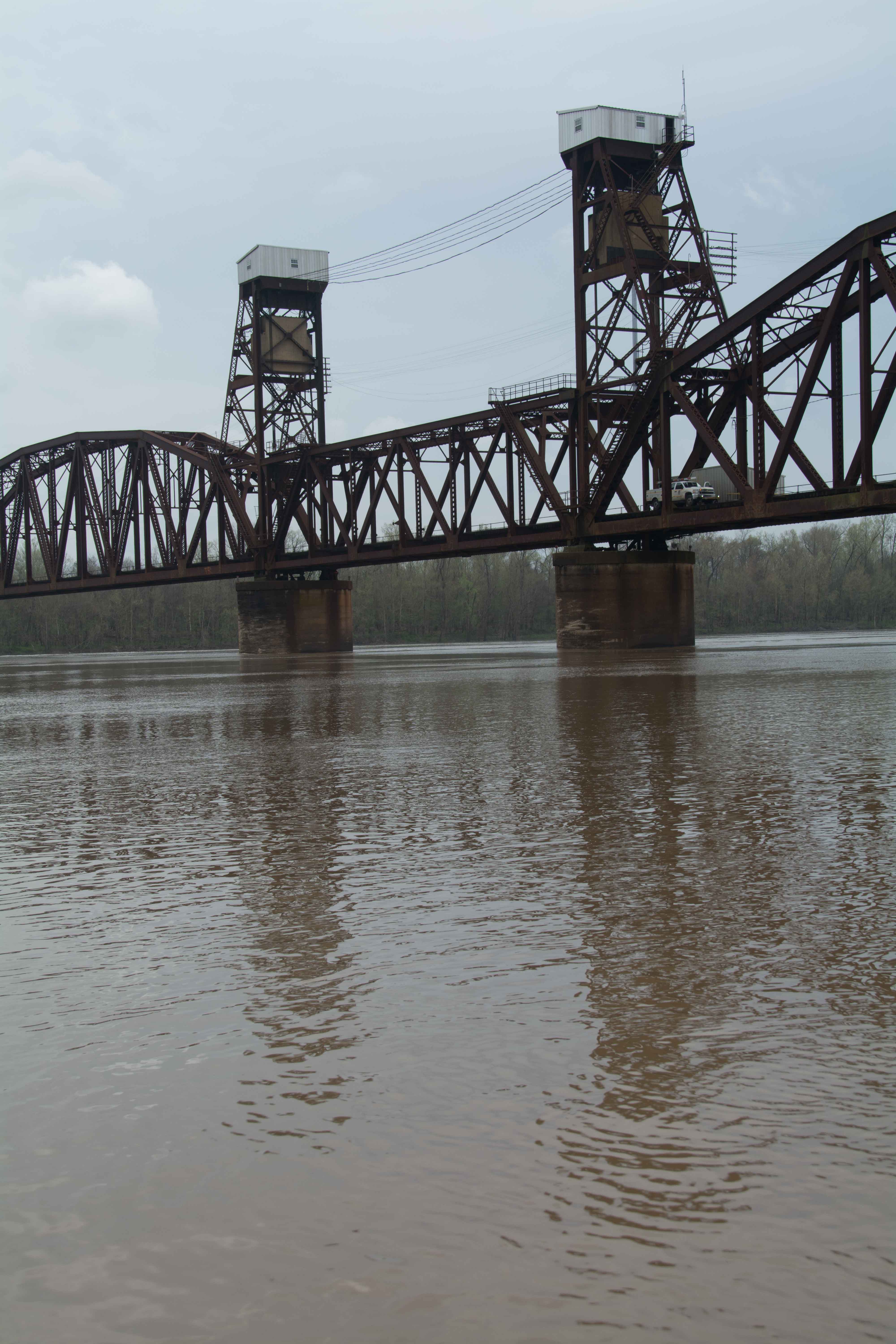 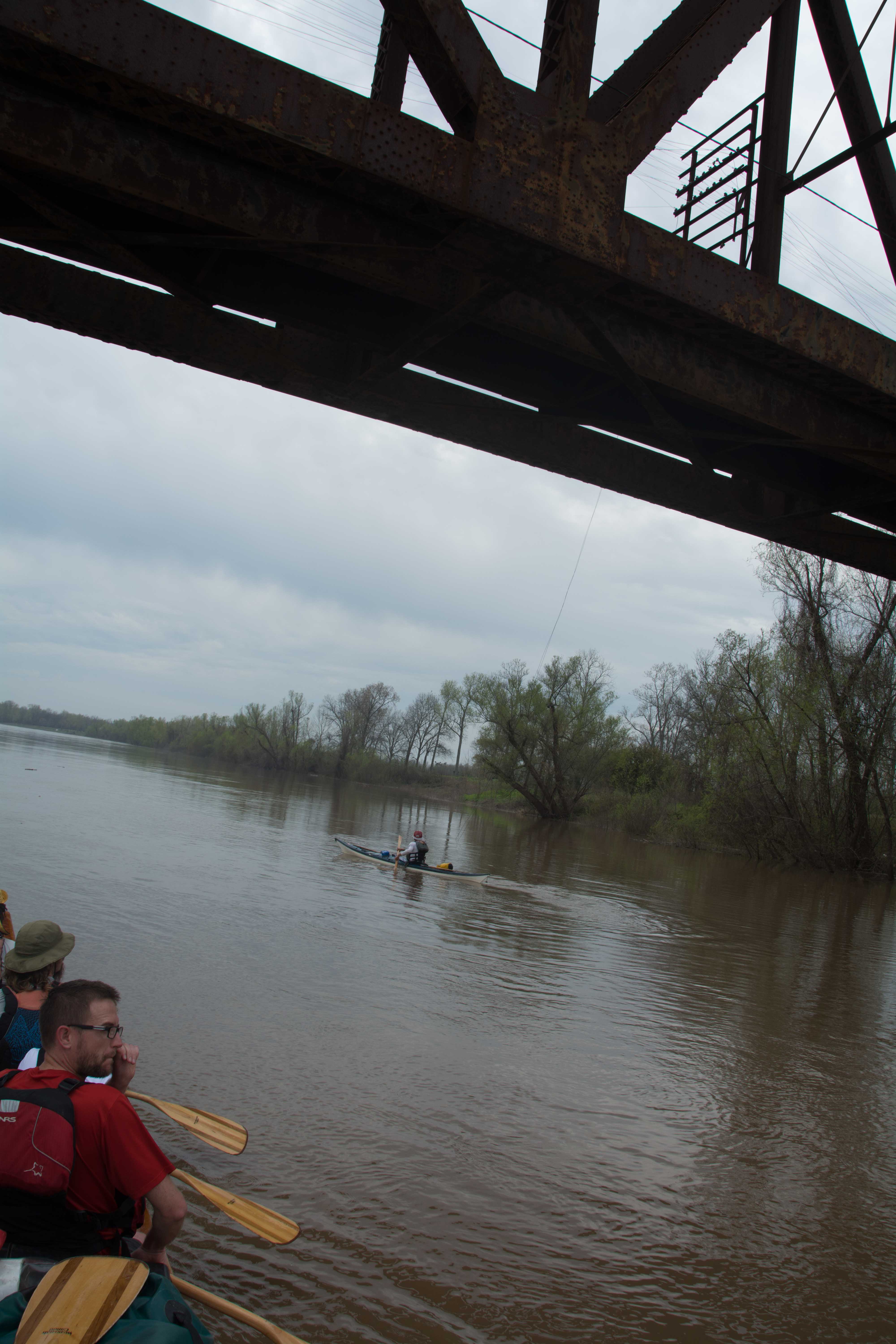 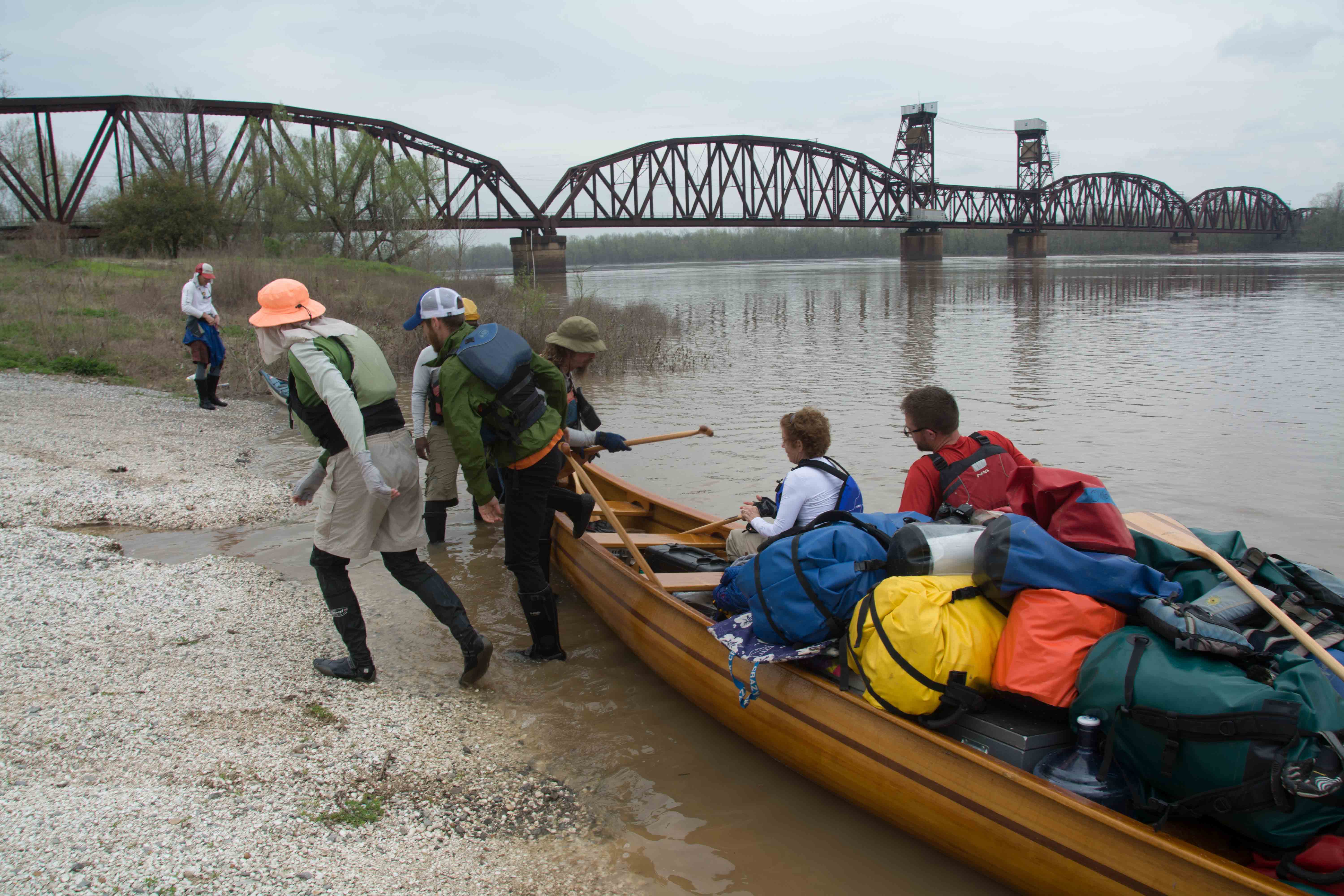