This is the only railroad bridge between St. Louis and the Gulf of Mexico that is also used simultaneously by pedestrians and vehicles.   It was originally named The Rock Island Bridge and was renamed after James T. Harahan, the president of Rock Island Railroad who was killed four years before the bridge was completed.  Ironically he was killed when his car was hit by an oncoming train.   On postcards this bridge is sometimes called The Missouri Pacific Iron Mountain Bridge.  Completed in 1916 the bridge was structurally advanced for its time, although 23 workers of the steel company lost their lives during its construction.  In 1917 cars and trucks were allowed to use the bridge, single file, driving on a narrow, one way wooden roadway that was suspended on the OUTSIDE of the bridge.  There was only a short railing on the outside edge of the road.

It wasn’t until 1949 when the Memphis-Arkansas Bridge opened, that drivers had a much safer means of crossing to Arkansas.  Freight trains continue to use the Harahan Bridge.  The main bridge structure is 2,548 feet long.  The bridge spans match the lengths of the bridge spans of the older Frisco Bridge.  This was required by the US Army Corps of Engineers to ensure that the piers would line up so as not to encroach on the navigation channels.

On the eastern end of Harahan Bridge is a bunker made of granite whose walls have seen some horrible scenes.  This area is said to be haunted.  The bunker is now known as The Ghost Bunker or The Strange Room.  It sits on the exact spot that Fort Pickering, a Civil War strategic post once stood.  It was advertised in the 1800’s as a clean jail capable of containing 300 likely young slaves by Nathan B. Forrest, slave trader and Confederate general.  The victims of the Yellow Fever epidemics of the 1800s were brought to this area by the hundreds, after their death.  Over 70 people have used the bridge at this point as a means of suicide.

The infamous room was sealed in the 1970’s when a huge supply of dynamite and blasting caps were found by railway workers.  However it’s still believed that ghost enthusiasts use the old bunker as a ghostly ground-zero to conduct their séances and ghost hunts.  They have walked away with audio evidence of screams and unexplained photographic oddities.

This bridge cost $10.5 million and as part of Interstate 55, it connects Arkansas with Tennessee.   Unfortunately it was not built to withstand an earthquake and can’t be retrofitted with seismic protection.  When this bridge opened it meant there were now three bridges at this location – approximately 150 feet apart.  The upstream structure is the Harahan Bridge.  The Frisco Bridge is the middle structure, and the Memphis-Arkansas Bridge is next in line.  As of 2007 the Memphis-Arkansas Bridge continues to serve as a vital automobile conduit for cross-river traffic.  It carries 50,000 cars each day – only about 5,000 fewer than the newer Hernando de Soto Bridge to the north.

This bridge has 5 names: Memphis and Arkansas Bridge, Memphis-Arkansas Bridge, Memphis-Arkansas Memorial Bridge, Memphis & Arkansas Memorial Bridge, and now a new name,  The Old Bridge.  The Memphis-Arkansas Bridge was built in 1949 as part of the US-40.  It replaced the narrow traffic lanes that were attached to each side of the Harahan Bridge.  It was built before the introduction of the Interstate Highway System, so the span was not built to Interstate standards.  It lacked the concrete barrier between the different directions of traffic and they were added later.  It was also built with a sidewalk on either side of the roadway.  They are also now separated from the traffic lanes by concrete barriers.  However sidewalk travel has been prohibited on the bridge. 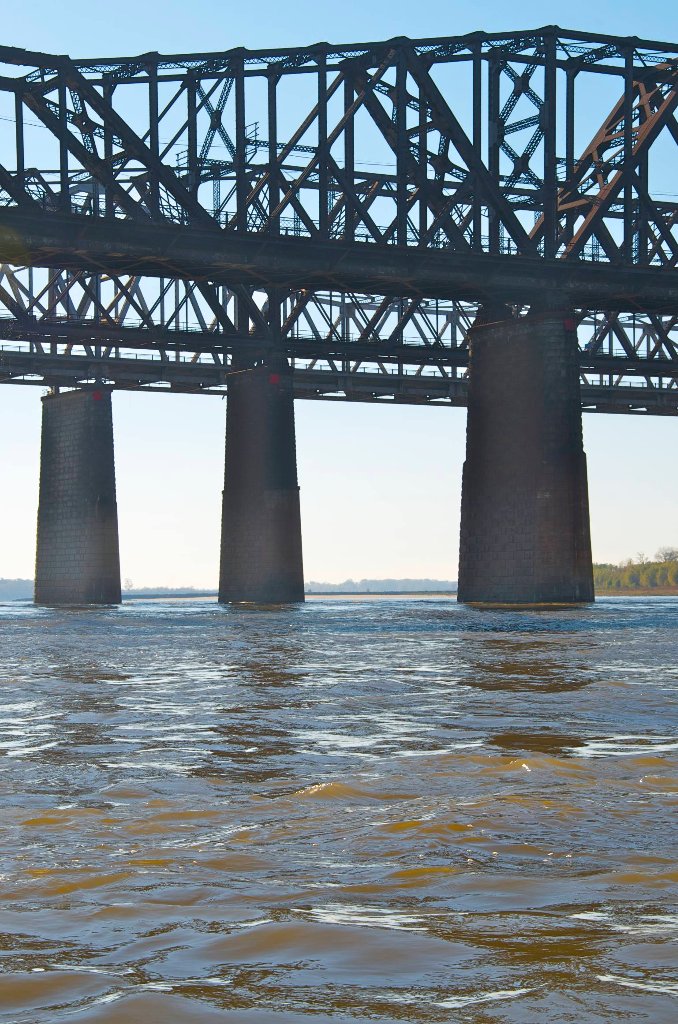 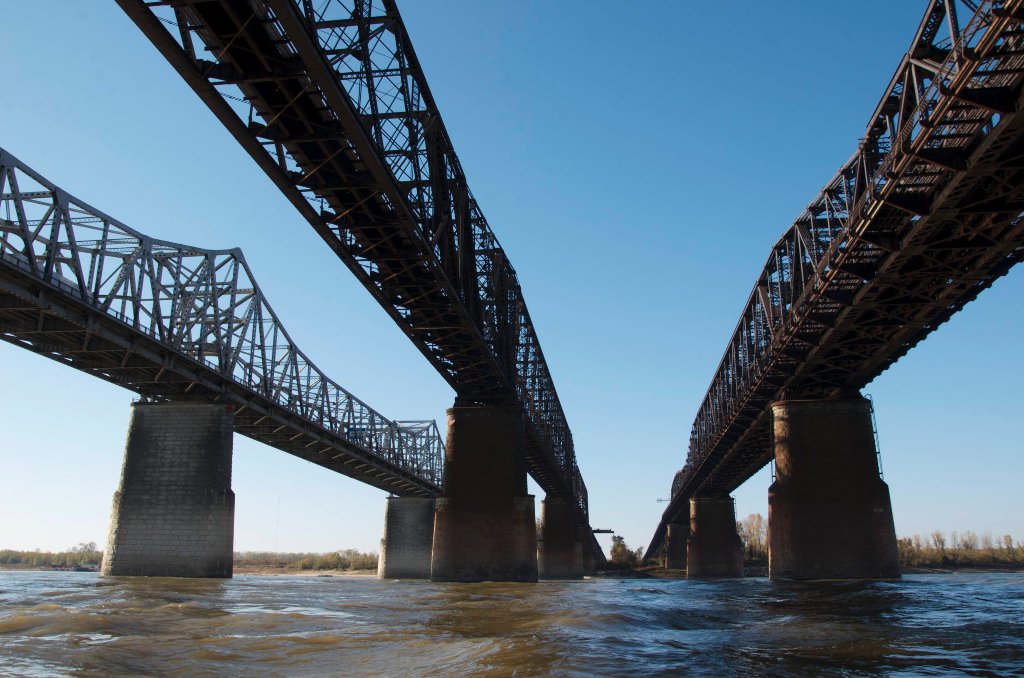 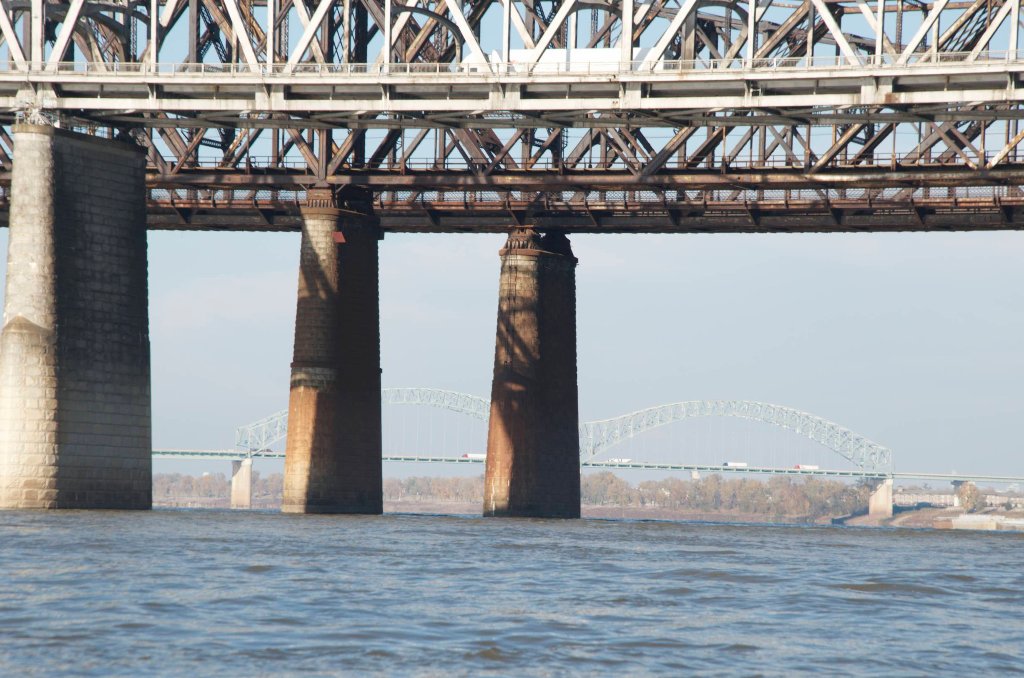