You can find good camping on Mhoon Bar (at the inside of Mhoon Bend) at almost any water level up to flood stage.  At low and medium water levels camp anywhere you see a good spot around the entire four-mile perimeter.  In high water the choices narrow to the last prominent hump of sand (near RBD 686) makes a terrific campsite with mature willows, cottonwoods and sycamores standing tall above for protection.  At high water you can cut the corner by staying tight bank right as you exit Peter’s Bend (the bend above Mhoon Bar), and swirling around the last big eddy at Ashley Point, and then following the receding line of trees downstream.  This will cut several miles off your distance, and also bring you close to the wildlife.  Watch sharp for bankside beaver and treetop bald eagles (which are known to nest in this area).   Paddle behind the isolated hump of mature trees (described above) which becomes a separate island at higher water levels, and then return to main channel.

Leaving Mhoon Landing the downstream paddler riding the outside of the bend needs to be wary of a very turbulent eddy about a mile and half downstream near LBD 686.5. Below medium water you will see a lot of fresh rip rap where the Army Corps has been trying to stabilize this gnarly place.  Ride the channel side of the eddy for a dizzying look at the exploding boils whirlpools and the ricochet speed eddy revolving fast upstream.  Locals know this raucous water feature as the “Whirlpool” and it is reputed to be the scene of more than one river drama.  I personally got the nose of my canoe stuck in the top end of this place and almost got flipped over when we re-entered the fast main channel.  In the front of my canoe was a Seattle reporter getting a ride he was not expecting on the misnamed “Old Man River!”  At the height of the 2011 flood the Mississippi River tore over the banks along Mhoon Bend upending trees and houses and went roaring through the woods to spill back over into Tunica Lake, which is a couple of miles south.  Tunica Lake swelled accordingly with muddy brown water and flooded every house in the collection of fishing and hunting camps located on its northeast corner.  This Tunica Lake Community is a lively enclave of rednecks and river rats who fondly call themselves “The Cutoff.”  The resilient Cutoff folks rebuilt after the flood, some adding a little elevation to what they had before 2011, and others throwing all care to the wind and rebuilding exactly the same.  In modern times, there has been some local effort to refer to the Cutoff as “Tunica Lake” since it sounds more dignified, and the “Cutoff” had gotten a bit of a bad name as a place where non locals hung out – many to drink and carry on.

The main channel slows down momentarily as it exits Mhoon Bend and slides into Whiskey Chute where the banks open up to almost a mile wide.  It’s a lovely piece of river with tall trees on either side.   Your best route of descent is staying with the current left bank past a series of dikes at the top end LBD of Walnut Bend.   At low water pristine pools (blue holes) of clear water are formed in the downstream side of the topmost dikes.   Sometimes these blue holes grow to the size of an Olympic swim pool, and are filled with delightful dancing blueish/greenish water.  Other times they become diminished with murky green-black water and mud slip bottoms inhabited by turtles and minnows and who knows what else.  As you get deep in the bend you can hug the inside LBD and cut the corner (where excellent low/med water camping can be found, but none at high water).  Or you can go wide with the fastest water, and get the slingshot treatment as the river pushes you outwards with centrifugal force and you quickly find yourself on the opposite shore.  Not a good time or place to meet an upstream towboat!  The turbulent waters here are known to respond exponentially with the passage of upstream tows.  I remember paddling with a Chattahoochee River guide in one of my big 26 foot long voyageur canoes into some choppy tall waves being ejected in the outwash of a big upriver tow at this place.  This guide is a friend of mine and he still laughs at the experience.  He was not expecting waves on the Mississippi.  The 3-screw tow passed up into Walnut Bend and on purpose we entered the wave train skyrocketing downstream behind his tail in a series of tall standing waves that were more tight than usual in formation.  Some of the waves were breaking by the time we got to the highest and darkest swells in this series.  My friend’s eyes got big.  And then he stopped paddling, maybe out of some reflex of self-preservation.  In shock he put his paddle down and held onto the gunnels of the canoe as the bow rose six, seven, maybe eight feet above the stern, and then clapped downwards with a mighty splash that rolled over the waist of the bow paddler and wetted the first three rows of paddlers behind.  It was my friend’s first time on the Mississippi and he has been hooked since! 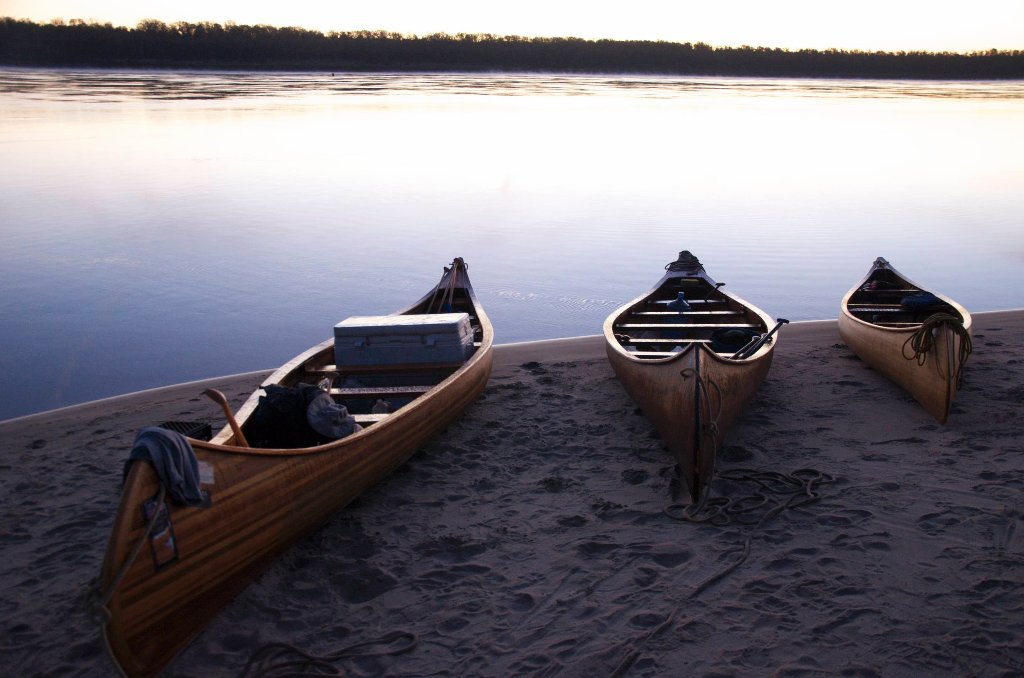 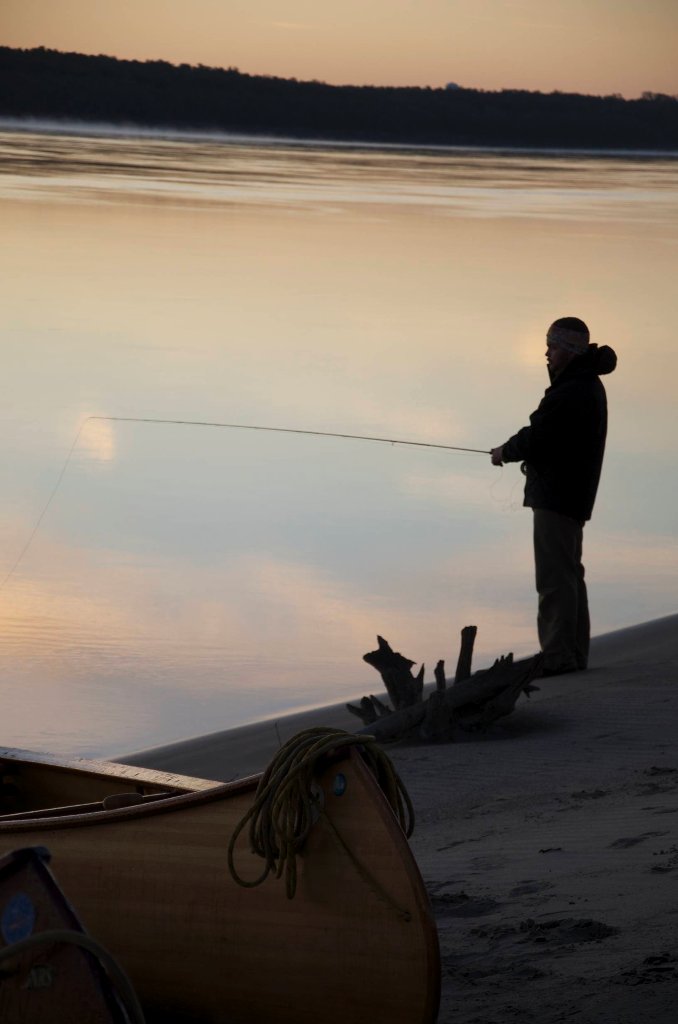 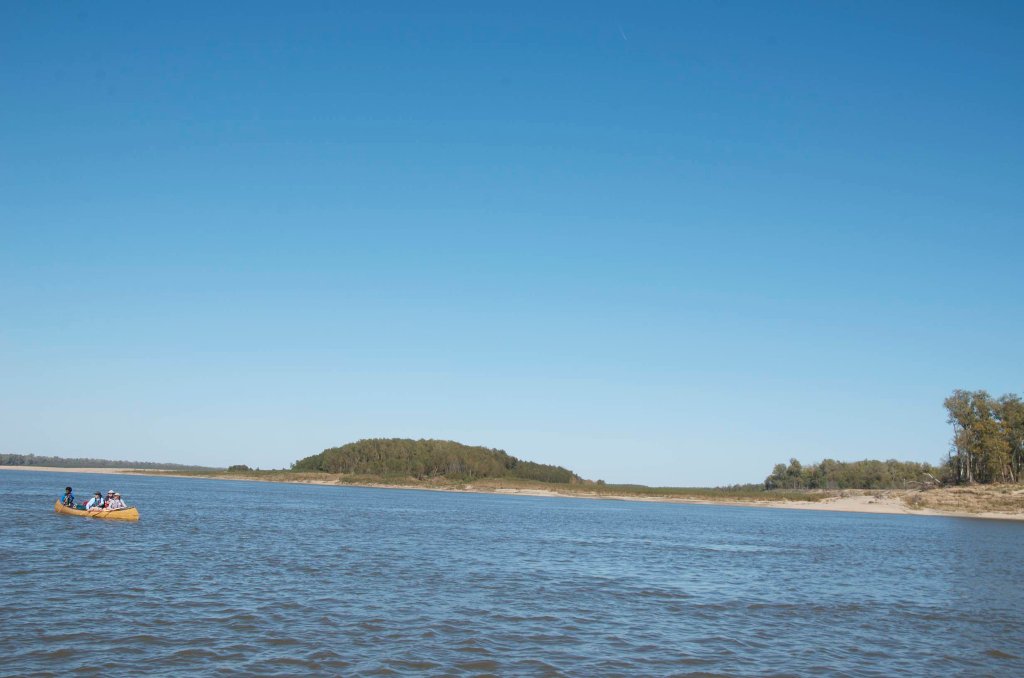 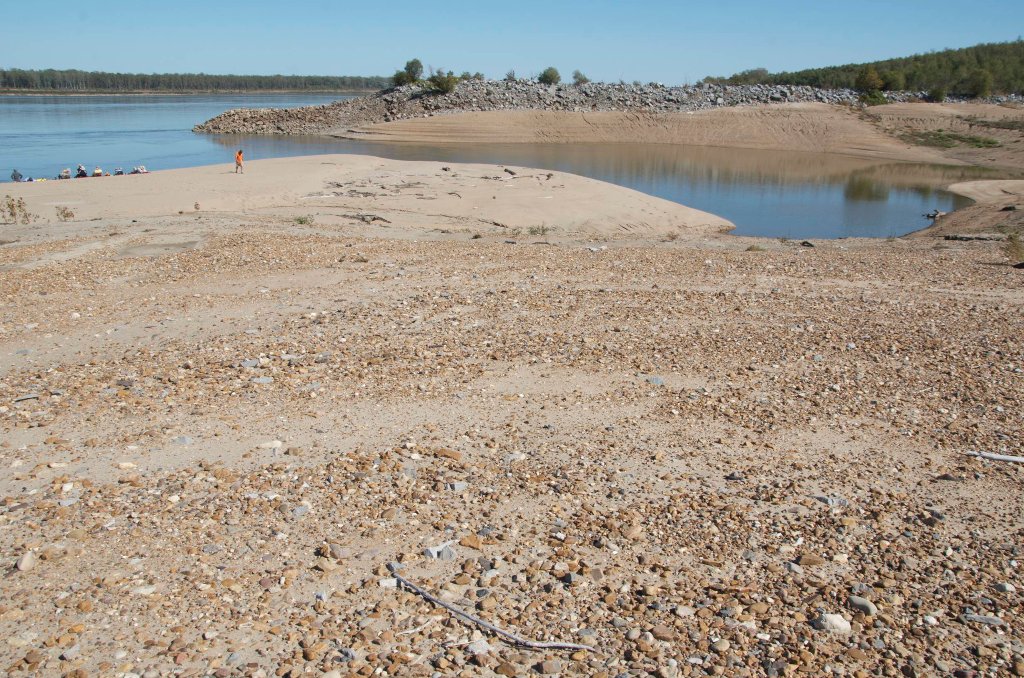