The 426 mile-long St. Francis River drains 8,400 square miles of the Missouri Ozarks & Boot Heel Floodplain, and is the biggest Mississippi tributary (on its west bank) in between the Missouri River (St. Louis) and the White River. Like many Lower Miss tributaries, the St. Francis parallels the big river for hundreds of miles until finally joining waters.   Indeed, the headwaters of the St. Francis spring forth from the hilly highlands above St. Louis, in numerous creeks & streams which combine and then follow the Mississippi behind St. Genevieve and Cape Girardeau, out of the Missouri Ozarkian Plateau and into the floodplain continuing still parallel in a meandering path behind New Madrid, Blytheville, and West Memphis.  At long last Crowley’s Ridge seems to force the St. Francis to join the Mississippi after this impressive southern run.  Its confluence creates one of the wildest bottomland floodplains in the region.  A cross section viewed east to west would reveal almost 20 miles of forests broken only by river channels and lakes & bayous.   Straddling Crowley’s Ridge is the dynamic St. Francis National Forest. Not far beyond to the East of the ridge are found the parallel drainages of the White River one of which is the “Big Swamp” of the Cache where the Ivory Billed Woodpecker was recently sighted after being considered extinct since the 1920s (unconfirmed sighting).   One of the most interesting sections of the river extends some 30 miles along its course, east of Jonesboro. The massive New Madrid earthquake of 1812 created the St. Francis Sunken Lands. The river, and thousands of acres along it, dropped a few feet to create a wetlands region. A wildlife management area under the auspices of the Arkansas Game and Fish Commission preserves almost 17,000 acres of the sunken lands but it remains interspersed with private land.

As you enter the waters in your canoe or kayak, the Mississippi is generally the stronger of the two rivers (unless the St. Francis is flooding) and creates a giant eddy at the confluence, oftentimes with boils & small whirlpools where the two meet.  Watch for changes of water color in the meeting of the rivers.  Sometimes it is only a subtle change, sometimes dramatic.  If the St. Francis is flooding it flows a creamy white.  In low water it is a clear greenish color.  The Mississippi varies from muddy orange/yellow/green in high waters to a clearer orange/green in lower water levels.  The two rivers tangle at their meeting, with pools of one river swirling into the other, the St. Francis hugging the Arkansas bank sometimes for hundreds of yards downstream as the mother Mississippi gulps swirl after swirl into her waters to which the St. Francis eventually succumbs and then is completely engulfed in the Mighty Mississippi.

Created by historic flooding of the St. Francis River, the St. Francis Bar is a perennial sandbar that varies from a mile long at low water, to half a mile at medium water, and is completely submerged during high water (goes under around HG37).  Beautiful picnic site and good swimming from its white sand beaches.  Possible campsite but no protection from the elements.  Watch out for nesting least tern April through June. 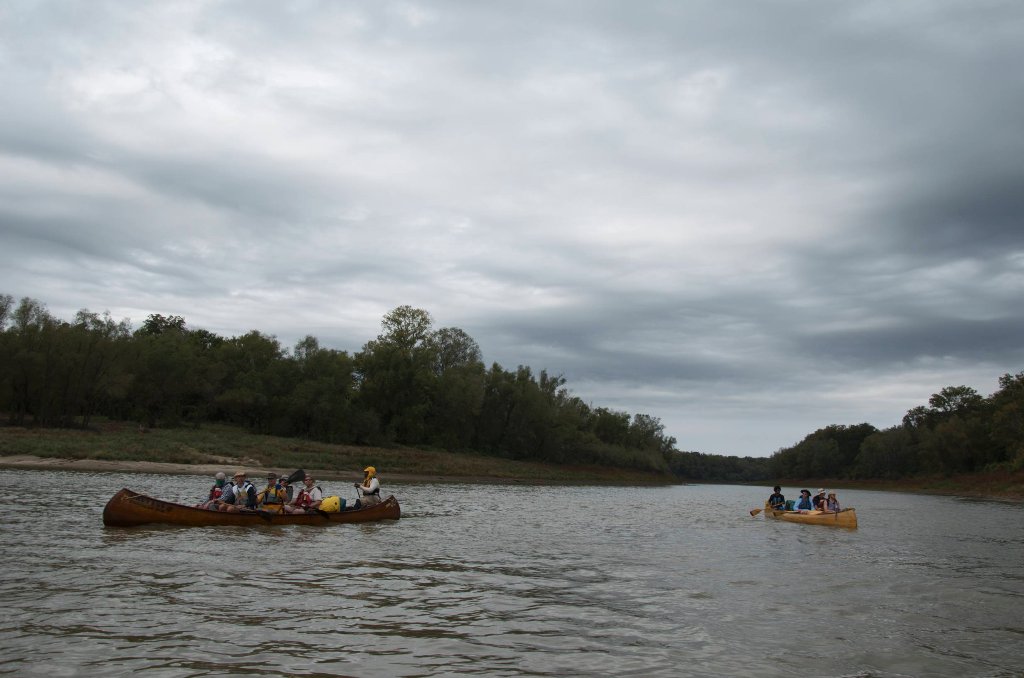 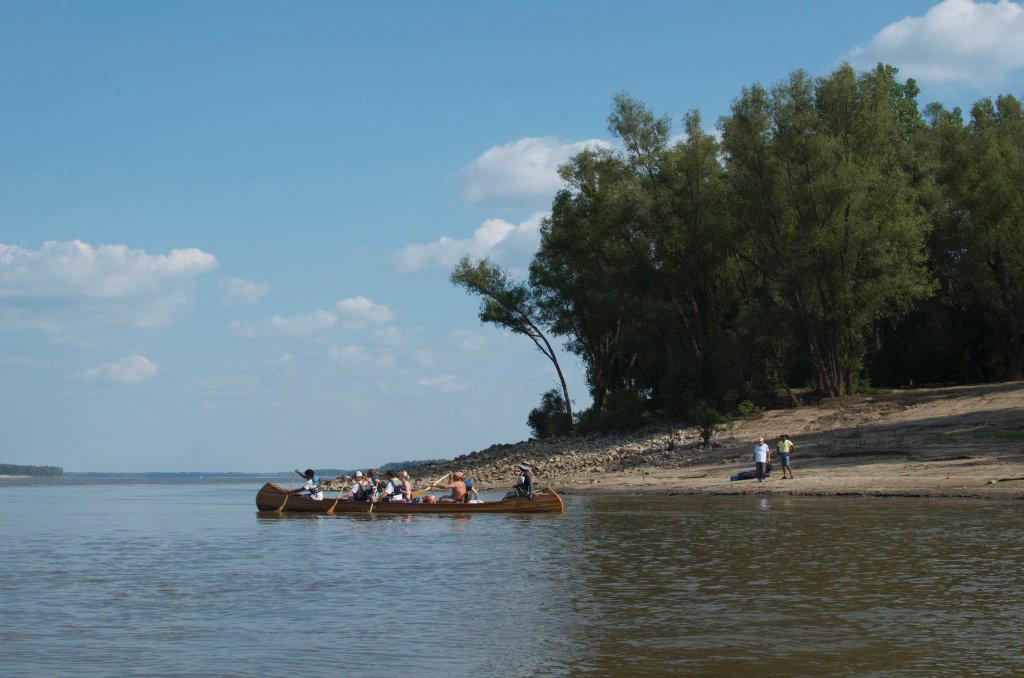 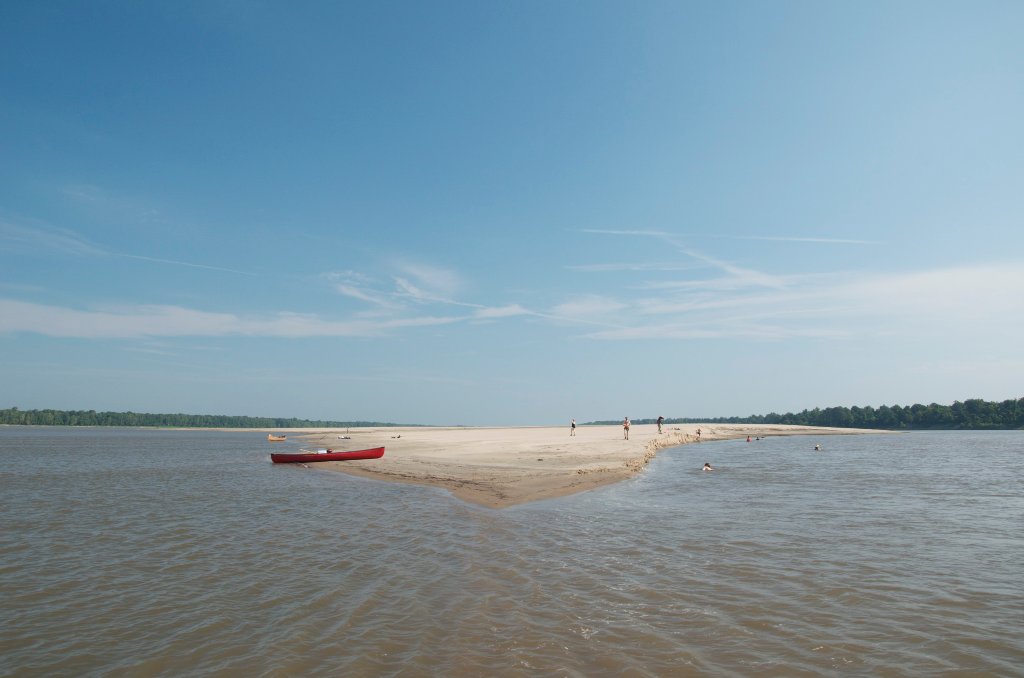 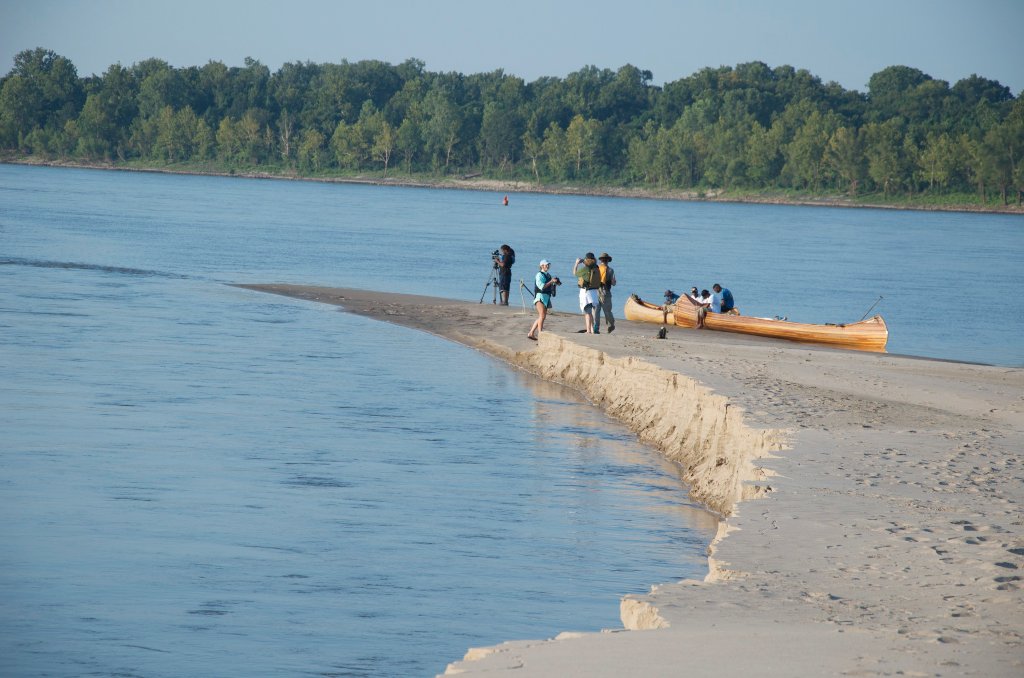