A highland of mixed willow/cottonwood/mulberry forest at mile 646, giant sandbars upstream at low water, plenty of sand at medium water, only a small spit of sand at high water 35HG, goes completely underwater at 42HG with only the trees on the tallest pieces of land poking out of the river water.

If it’s getting to be that golden time of day and you are ready to pull over for the night, the sandbars of Island 61 are a good choice for campsite.  When selecting campsites my rule of thumb is the first site is the best site.  During low water levels, it doesn’t really matter because there is an endless variety of good places to lay a tent and take shelter.  However during high water the choices become limited, and passing one island might result in a very long paddle to the next possible camp.

At low water island 61 arises out of the big eddies not far below Kangaroo Point.  The top end of this island begins to take shape below the #1 wing dam, as a giant sandbar the size of some ocean beach fronts – composed of smoothly undulating dunes which parallel the main channel.   You can make landing anywhere and enjoy a sandy location reminiscent of the tropics, but you might watch for a place with some protection from the sun & wind, and also privacy.  If it’s a perfectly calm evening with no storms in the forecast and you don’t need firewood for cooking, stop anywhere and you will have a spectacular sunset and enjoy endless night-time recreation in the form star-gazing in a sky as big as Montana.  Also, during warmer seasons, mosquitos aren’t as bad out on the open bar as they are around vegetation, particularly if there is a breeze.  Be cautious though, if there is any hint of storms in the area, seek a sheltered location.  Always drag your canoe up the shoreline and tie it down with a sand anchor or to mature tree or a firmly planted log.  Sometimes the weathermen themselves are surprised.  I was hit one evening at sunset by a wind storm that appeared out of nowhere from the north and proceeded to level our camp and sent some of our tents almost a mile across a sandbar!  There was no hint of this on the NOAA radio that I had been checking before choosing camp.  Nature is full of surprises.  There isn’t a wilder place full of more surprises than the Mississippi River!

At medium water the sandbar is reduced to hundreds of acres of rolling & tumbling dunes projecting outwards from the forested highlands center island.  This is a dynamic place that changes dramatically with every flood, but always are found primo campsites up to higher water levels.  Above 35 the choices get very limited and you might be sharing the much-reduced island with a cloistered coyote clan or two and some possums & armadillos who can be heard rustling around the shrubby willows after dark.  Above 40 you should avoid the island entirely as a place to camp and instead opt for Island 62 (5 miles downstream) or island 64 (15 miles downstream).

Continue on downstream around Old Town (site of an ancient Indian village) and spin around Miller Point where the entire river makes a 180 degree and turns back on itself, often with powerful expressions of giant boils & whirlpools at the edge of a giant & very strong eddy that forms near mile 644.  The water is so strong here that sometimes you can hear the hissing of sand as it is pushed along the bottom of the river.  You will hear this hissing sound reverberate through the bottom of your canoe or kayak, even though the river is 150 deep in places!   At Modoc Crevasse mile 644 the levee broke here on the Arkansas side of the channel in 1913.  Not far downstream the wreckage of a Mississippi Limestone dredge that sunk in in 1983 becomes visible below 4HG, and is almost completely exposed at -6HG.

Old Town Bend is one of the few remaining classic Mississippi meandering loops which spins you around in a half circle and leaves you paddling in the completely opposite direction you started in!  On a full moon night you can paddle into sunset, wrap around the bend and continue paddling on into moonrise.  The towboat pilots call this section of river the wiggles for its meandering nature.  Everyone thinks that the Mississippi River runs south out of the North Woods straight down to the Gulf of Mexico, when in fact it is almost never running due south, but seems to try every direction but due south, something like a wild horse that doesn’t like the intentions of its rider!

As you leave Island 61 and paddle through Horseshoe Bend a powerful tongue of water will thrust you outwards into the the middle of the river past Miller Point (647.7) towards the McAlister Grain Dock at 644.6.  Maintain the red buoy line if there are any upstream or downstream tows in view.  If not you can stay with the fastest water in the middle of the channel and make your crossing towards the Arkansas shore.  During low water the current all goes to the middle of Old Town Bend and then seems to dissipate in the middle, and then later reorganizes and two miles downstream becomes concentrated around the bottom end of the bend near the second green Channel Crossing sign at mile 643.4.  During high water there is strong current everywhere around this bend, and for the most interesting inspection of Miller Point, stay tight LBD and keep your eyes peeled for wild boar, white tailed deer and other inhabitants of this rich forested area.  Above 40 HG you can maneuver in and out of lines of willows & cottonwoods for variety of paddling, but always watch for snags and sawyers.  Turning sideways as water flows through trees might mean capsize.  Regardless of water level there is always a large & powerful eddy found downstream and below Miller Point (647.7) and a high bluff of sand against the Mississippi bank. 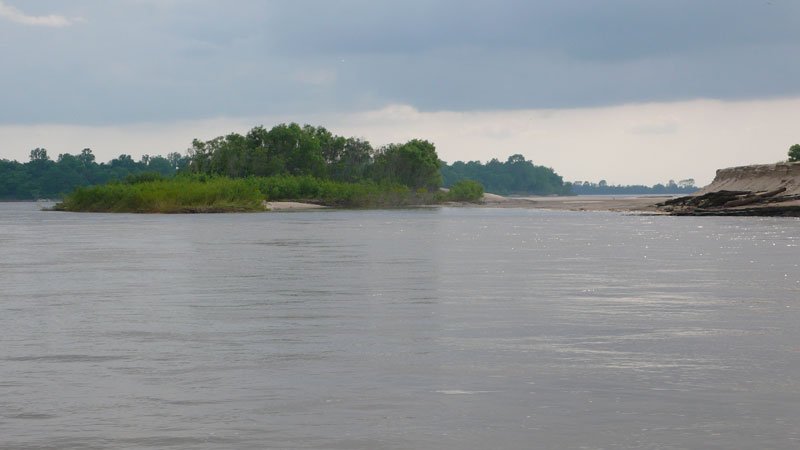 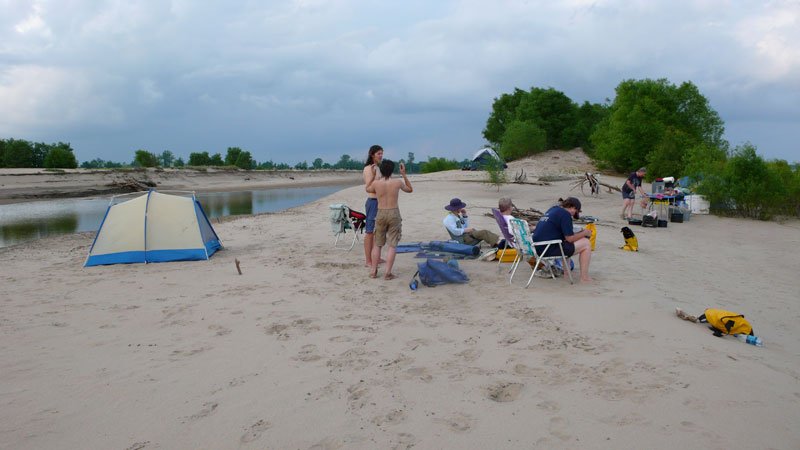 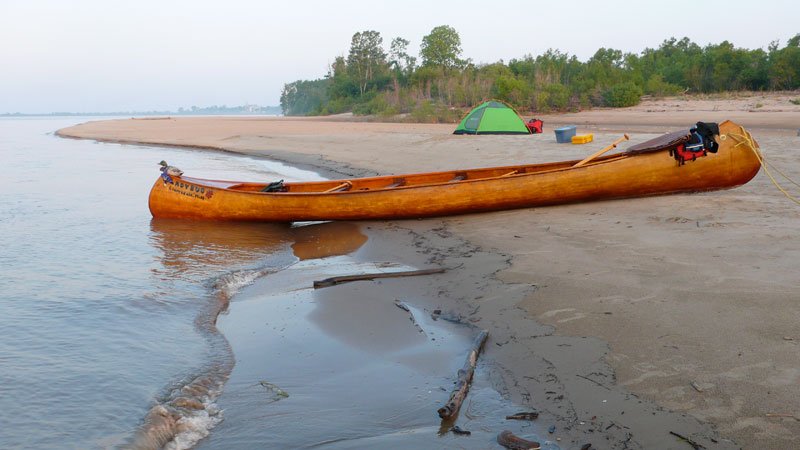 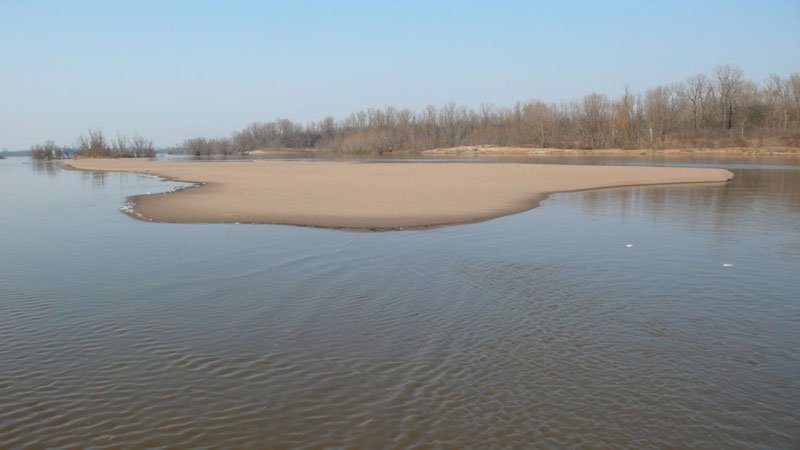