RBD Near Mile 3 of the Old Channel of the White

Wreck of the Victor?

After the flood of 2011 I discovered the remains of a steamboat-shaped vessel lodged in the muddy bank at a steep angle at the southernmost point of the first big bend RBD.  The rough rectangular shape of the large wooden marine frame, and the hand forged square nails led me to believe it was either a steamboat or a steamboat era barge.  This was exciting because rarely is any evidence seen of the legendary steamboat days along the powerful currents of the Lower Miss, which seem to destroy everything in its path or cover them in mud.   Later after doing some research I located Dr. Skip Abernathy of the Arkansas Archeological Survey who told me that The wreck is probably the wood-hull stern wheel steamboat Victor which sank in 1907 while trying to free some grounded timber barges.  Back in 2010 and early 2011, there was part of another wreck visible, a flatboat, only the second seen in the Mississippi Valley although there were thousands in the 1800s.  The steamboat The Victor was lost in Sibley Chute [Old White] in 1907 while fleeting barges, but the nails and rivets attaching the keelson timbers to the ribs are wrought iron and mild steel would be expected in construction occurring after about 1880.   As of yet there is little confidence in a boat name for this one. The Victor was 26 feet wide and this one measures 16 feet from keelson to the port side (still mostly buried) making the boat about 32 feet wide. Next rise and fall of the river might expose more evidence.  Paddlers keep looking and record your findings with camera and GPS.  Send your evidence to the above Archeological Survey.

Old Channel of the White

The beauty of this channel is in its wildness and the lack of any channel improvements as the Army Corps calls it.  You won’t have to paddle around long piles rocks.   You won’t have to round miles and miles of revetment to get around the next bend of the river.  You won’t see any buoys or signage.  You won’t have to paddle past ugly places where the wild muddy banks have been asphalt paved like the streets of downtown Los Angeles.  Towboats don’t ever use the Old White.  Here you get a taste of the Mighty Mississippi as it looked and felt in its ancient days — before modern man made big changes with big earth-moving machines and giant water power vessels.

As you slide along through the deep woods between Big Island and Montgomery Island  you will won’t see any signs of mankind save one single bankside shack and a single strand powerline crossing, both near Mile 2.  Otherwise there’s nothing but ten miles of collapsing muddy banks, long yellow sandbars topped with the the ubiquitous willows and cottonwoods, while thick forests of tall oaks, sycamores, sweetgums, grow higher up in the bottomlands.  The broad channel varies from 500-100- yards wide and you can choose any line of travel without the fear of getting plowed over by an oncoming tow.  This is a huge relief in of itself, and will afford the long-distance paddler some mindless meandering & wandering in the way experienced on most other rivers.  Watching the compass you will witness a bewildering blaze of directions, south, then west, then east, then north, then south, then west and finally east back into the Mississippi.  As you head into the third big bend you will make a one mile paddle due north.  This confounds some people who have always heard that the Mississippi runs out of the North Woods south to the Gulf of Mexico!   This bend is reminiscent of the famous loop of river at Bessie’s Bend (New Madrid, Missouri) where the water has to circulate nearly 360 degrees in a twenty-mile run and ends up one lateral mile from where it started.  (In Bessie’s Bend there is a seven mile northerly run before the big river gets turned around and pushed southward again.)

As you come around the third bend you will enjoy five miles of mostly southward passage with many striking views downstream, the scene composed of dramatic long distance sights down the wide Old White, banked by the undulating tall forests of Montgomery Island, with distinct highlights created by several small back channel islands.  The first island lays right bank descending at mile 6.  If the water is above 20HG you can cut in hard right and follow this narrow channel (30 feet wide) as it meanders behind the island, and then opens up and slows down as it rejoins the Old White approximately one mile below.  There is a rustic hunter’s ferry normally tied up LBD near mile 8 that services Montgomery Island Hunting Camp.  Not far below at mile 9 is one last small back channel island.  On the other side of this little island flows the main channel of the Mississippi River.  Above 10HG you can paddle to either side of this last island to rejoin the Mississippi, but below 10HG you have to take the left channel because a large sandbar takes shape in the right channel.

As you leave Old White River there is an busy logger’s camp found RBD 590 on Big Island that has been active for at least the last twenty years that I have been paddling the area (since 1991).  As you paddle by look for river barges piled high with 16-foot lengths of cypress, cottonwood, oak, sweetgum, and other hardwoods of the bottomland hardwood forest.

If you have planned a campsite or picnic stop at the Terrene sandbar (Great River Road State Park) cut sharp across the bottom of Montgomery Island, checking for towboat traffic (VHF Channel 13) and then begin your long ferry crossing.  [CLICK HERE: Ferry Crossing].  During high water little remains of the Terrene sandbar and you will have to paddle hard to reach the State Park.

On the other hand if you have no plans to stop but intend to continue on downstream to the Rosedale Harbor, or mouth of the Arkansas, you might as well stay in the right channel behind the last island of the Old White and enter the Mississippi below, and follow the strong currents of RBD downstream around Klondike Bend (opposite Great River Road State Park). 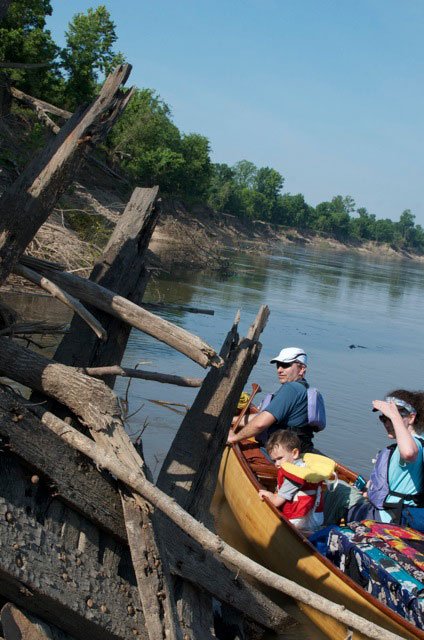 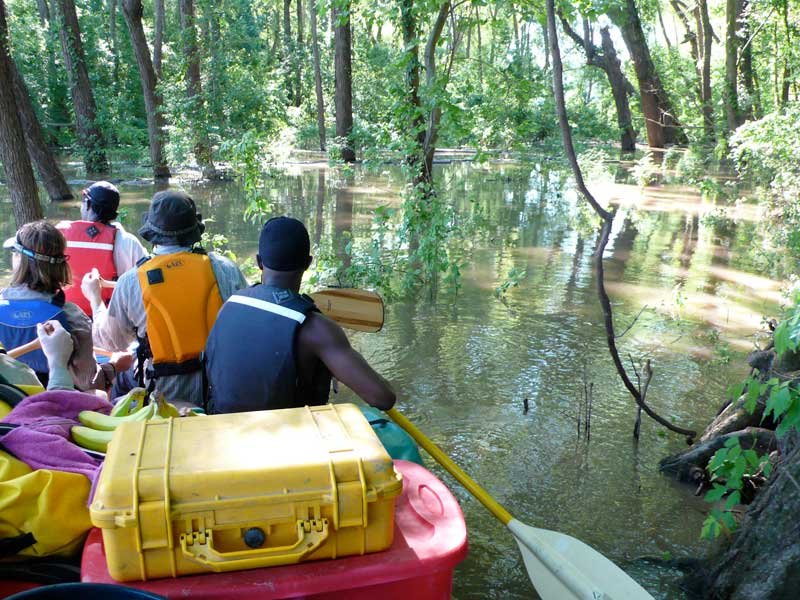 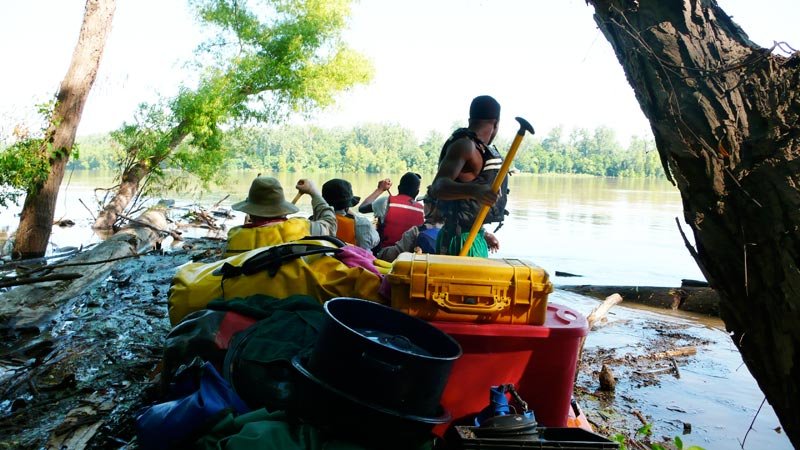