During the late Spring 2011 the Lower Mississippi Valley was submerged by the highest volume flood since the high waters of the flood of 1937 (which was higher than the 1927, but not as catastrophic, since higher levees had been built).  Water levels in this section of river approached but did not top previous records, but further downstream below the mouth of the Arkansas in places where the Mississippi gets squeezed they did.  The levels at Natchez, for instance, were a full two feet higher!  Why didn’t the waters climb higher in this section?  Partly because of the wide floodplain in the Delta, where the extensive forests of the batture, the land between the levees, absorbed some of the flow so that the river spread out as it gradually rose.   And partly because of the extra flooding water that was being carried by the Arkansas River which enters further downstream.

Mississippi River Paddlers often wonder where all the wildlife is.  It’s difficult (if not impossible) to see deer, coyote, armadillos, beaver and all the other forms of wildlife common to the mid-South from the middle of the main channel. The best opportunities for viewing birds & amphibians & other animals is when paddling through the back channel.  If you practice quiet paddling, feathering your paddle and curtailing conversation, most likely you will encounter something.  Be vigilant and keep your eyes keen on distant points, depressions in the muddy banks and openings through the forests.  Commonly seen in this area are small herds of white-tailed deer, wild turkey, beaver, and turtles.  Turtles enjoy sunning themselves on the slopes of muddy banks, on snags, or perched atop floating driftwood.  In warmer months they’re sometimes joined by snakes.  Hint: turn off your cell phone.  You shouldn’t paddle & talk on the cell phone anyway.  Its hazardous to your health and will ruin any attempt to get away from the rat race.

As you float out of the Chute of Island 63 you will be greeted by a large area of boiling and whirlpooling water where the back channel rejoins the main channel.  Across the main channel are remains of the bottom end of Island 62.  Twenty years ago this was a forested island bottom, but today only a thin sliver of rip-rap remains to be seen, and then only visible below medium water levels (20HG and below).  The forested bottoms have been completely removed by the forever roaming and unpredictable appetite of the river.  Further off towards the Arkansas forests a large sandbar emerges at low water, and if you are ready for lunch or a rest stop paddle across the main channel one mile and choose your spot.  As always, look both ways before crossing!

Continuing downstream the force of the entire river is propelled outwards and piles against the left bank and is forced Westward, and then slightly North-Westward, gathering speed and momentum as it does, and several miles downstream is forced further outward in a vigorous tongue of water several thousand feet wide and jets back towards the Arkansas shore near Modoc Old River Lake, at a place the tow pilots refer to as Hughey but is marked on the Army Corps maps as Fair Landing Bend.  As you slide along you will notice a line of finely-crafted mansions on stilts lining the LBD, this is an exclusive hunting camp called Burke’s, the owners of these places pay big money for their views, and are not often found at residence, but are cut off from the rest of the world during high water.  If there are no towboats in the vicinity you can follow the powerful charge of water exploding off Burke’s Point for an easy channel crossing over towards Fair Landing 632.5 and the Arkansas shore, where most of the water — and hence most of the river flow — is headed.  However if there are any approaching tows your best route is to stay with the slower waters of LBD: during low water maintain a line inside of the red cone buoys until rounding the corner and then continue on downstream until there is a lull in traffic before crossing.  If a downstream tow seems to be standing still it is probably going into the flanking maneuver (see below).  Keep your distance and get to the far shore as expediently as possible, preferably behind the tow.  During higher water levels you will find good flow tight against LBD with interesting cut-bank scenery and good possibilities for viewing wildlife and of course the advantage of less distance to travel. 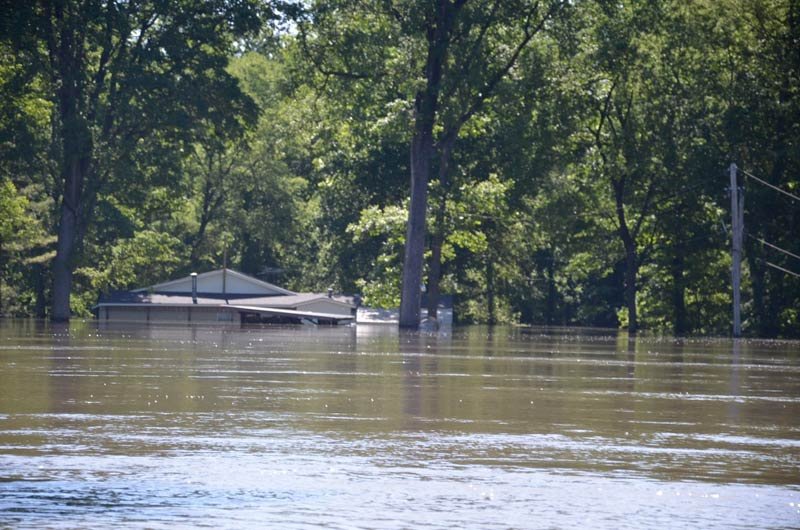 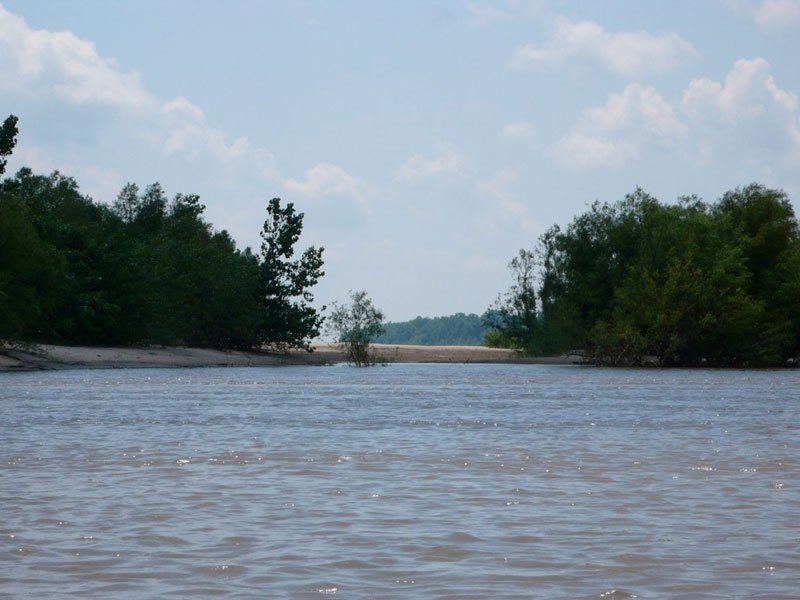