The beautiful white-sand beaches found along the lower dikes #3, #4, #5 and #6 make excellent pit stops, picnic sites, but is too open for predictable camping.  A photograph from one of these beaches on a sunny day seems to suggest the Caribbean not the muddy Mississippi.  You might want to set up a volleyball net and suntan alongside the sparkling waters reflecting the deep blues of the sky.  Swim at your own risk.  Watch for strange currents.  The waters tend to pull away from the sandbar into the depths of the main navigation channel here.  Strong swimmers only, and designate a lifeguard equipped with safety rope and rescue vessel.  If you are a weaker swimmer or have children your best bet will be to find an off-channel place where the water is calm and quiet.  With a little exploring you should be able to locate calm places around the backside of the sandbar.  [CLICK HERE: Safe Swimming]

The best blue holes in the area were seasonally carved below Dike #5 but the high waters 2011 covered them all in deep sand.  Maybe they’ll reappear in the future?

As you pass below the forested top of Island 69 opposite the Lower end of Sessions (near Mile 614) your will be attracted to a shining cone-shaped building downstream that looks like a silver pyramid, maybe a repeat vision of the Memphis Pyramid.  This is the Bunge Elevator at Dennis Landing.  The river has not treated this grain elevator kindly, for years it was rendered inoperable by growing shoals, in 2011 it was completely flooded. The Boat Launch is located a mile above the Elevator.  If you are planning a landing at Hurricane Point (Mile 610: Dennis Landing) You can stay main channel, or go back channel Island 69, but don’t follow the Secret Old Back Channel described below or you will end up a mile below the landing and will have to make a very strenuous upstream paddle and a vigorous ferry crossing to reach the landing.

If you want to explore a back channel, you could also cross over to the Mississippi shoreline LBD and jump into the back channel behind Cession’s Towhead — and be well positioned for reaching Dennis Landing.  Keep reading below.

Opens up around HG 18, strong flow at 25, forests flood out at 35.  Just below Knowlton high ground is a secret back channel RBD that is well worth paddling through for excellent wildlife viewing and a vision into the big forests and mud-bank side channels that used to run wild all over the Mississippi Valley.  Hug the right bank descending below Knowlton and look for a gaping opening in the woods in between Island 69 Dikes #1 and #2 (marked on map as Below Knowlton Dikes).  Remember the paddler’s rule of thumb, if its flowing in, its gotta be coming back out — somewhere.  River water seems to get sucked into this yawning opening and is forced inwards and gets swirled around several bends, narrowing as it does.

Secret entrance to Knowlton Blue Hole: Around the second bend, at its NW extremity you will see a narrow channel maybe 30 feet wide entering into RBD, this is a water entrance into Knowlton Blue Hole, you can cut in here and paddle a hundred yards through the willows for a view of the lake and surrounding wetlands.  Beavers abound here in between floods.  For several decades I used to visit the largest beaver lodge I have ever seen — which was found situated between the willows behind Knowlton.  The flood of 2011 removed the lodge, but probably this will be rebuilt by local residents or the castor order.

Continuing down the old back channel keep conversation down and paddle quietly and you will see wildlife not seen anywhere else.  I’ve encountered Choreopsis Moths, the largest of North American moths, and a dazzling array of songbirds.  One winter day while floating along in a canoe my silent passage was rewarded with a view of herds of white tailed deer swimming across the channel.  One summer day the strikingly beautiful milk snake swam alongside and allowed me to take several photographs.  I’ve found bear tracks alongside mine, and have heard many stories from local fisherman & hunters about bear encounters, and bear swimming the back channels.

Halfway down the three-mile channel is a low road crossing connecting the mainland to the Island 69 Hunting Camp, the water should be flowing over the low road until the river drops below 10HG.  One year hunting camp members decided to close off the back channel with crude earthworks for permanent vehicle access, but later the US Army Corps made them remove all traces, it being illegal to close off flowing waterways.  You get fleeting glimpses of several hunting camps as you float by, but the forests resume below, fields on the mainland, the waterway twists this way and that, at one place rounding and small island with the biggest trees in the area, and then eventually spilling out into another back channel of Island 69.

Island 69 is an archipelago of Islands.  As you exit the secret old channel you are entering another bigger back channel. If you need to make landing at Hurricane Point (Dennis Landing) you will have to paddle upstream several hundred yards and then ferry over a solid mile to make the crossing.  If you are continuing downstream stay with the flow and follow it a half mile where it rejoins the main channel for points downstream. 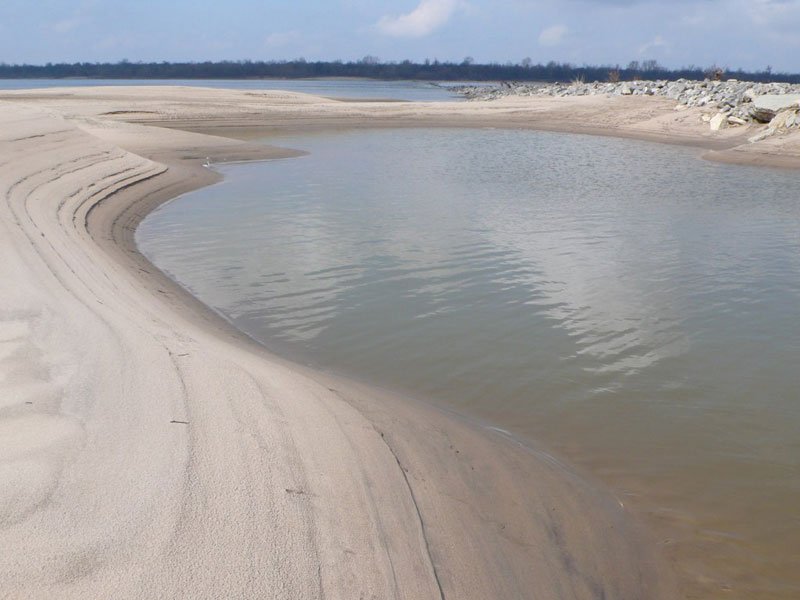 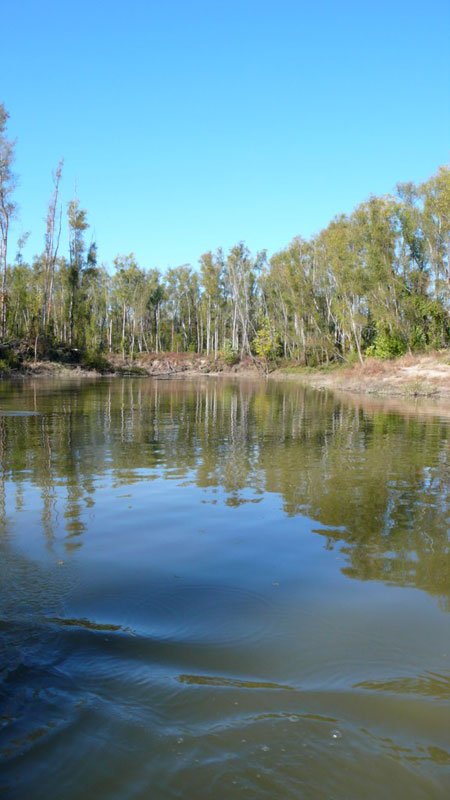