Paddler’s Note: One of the biggest and most powerful eddies on the Lower Mississippi RBD.  Be especially wary of any tows in this area.  Narrow river leaves little room for towboats to navigate.  High volume turbulence at base of bend with powerful boils and recurring whirlpools.  Flanking Maneuver often executed during low water.  [CLICK HERE: The Flanking Maneuver].  Tight bend.  Downstream tows might appear quickly from out of view from around the bend requiring fast action.

Wood Cottage takes its name from one of the many historic gathering and loading sites for firewood to feed the insatiable appetites of the Mississippi River steamboats or yore.  After the surrounding forests had been depleted of easy pickings the woodsmen and women gathered driftwood delivered by the river.  Eventually coal replaced wood as the fuel of choice, and then later diesel, and these rustic wood lots became known only by their names on the map.  According Marion Bragg, Most steamboats on the Lower Mississippi did not convert to coal until during or after the Civil War.  Small steamers used 12 to 24 cords of wood every 24 hours, and larger ones could consume 50 to 70 cords in the same length of time.  For comparison, an uninsulated farm house in Vermont might burn 12 -24 cords in one entire winter!

As noted above, the main channel of the river dives deep here into the Arkansas bank as it is swung outwards by the centrifugal force of the elbow bend around Island 67 and into the outside of the bend, right bank descending.  (similar to Fair landing Bend around Burke’s) this is another tight right-angle bend that starts out Southwesterly and ends up charging to the East.  Right-angle elbow bends seem to cause more turbulence and agitation than any others.  Given no allowance to spread over the banks the currents dig deeper and deeper into alluvial sediment at Wood Cottage, eventually carving holes several hundred feet deep (at medium water).   A giant eddy is formed here past a headland covered with rip-rap and revetment just below the Wood Cottage Light 619.6, and the whole Mississippi River gets pushed out towards the island and the resulting giant tongue of water narrows down to several hundred yards with the big eddy on the one side and a dead water that forms alongside the shallows of the island on the other.  This is one of those places you can actually see the entire force of the river concentrated in one place (as opposed to being spread out over the face of a river-scape a half mile or a mile wide, no one channel but many small channels all commingling and flowing alongside each other).  This is not a good place to meet a big upstream towboat, the waves are always the biggest and most turbulent in fast tongues of water like these, and even more so along a powerful eddyline.  Even at low water the water is fast here and always turbulent against the eddy line.  The eddy sprawls & swirls over several acres of river, as stated its the biggest eddy in the area.

Never underestimate the power of these eddies.  A nine time canoe race champion  reported feeling her paddle being worked by unseen forces one time while paddling through this river bend with her husband, with several instances of near capsize — which so unnerved her she has not since returned to the big river.  This is too bad.   But at the same time reinforces the weird water motions displayed by the river that can prove bewildering to even the most experienced paddler.

As the central tongue of water rushes downstream past the big eddy everything opens up for several hundred yards, and then closes up again as you approach another head land at Keith’s Landing mile 617.7 and another big eddy is formed below.  A whale-sized boil periodically issues to the surface at the top of this eddy with strong roaring gulping & slurping sounds that add to the feeling of the raw & uncontrolled power of the river in this bend.  Boils in general are safer than powerful eddies or whirlpools, because they are columns of water being pushed upwards.  However, a monstrously powerful boil like this one could cause a capsize to an unsuspecting paddler, and sometimes the sideways sliding of the water erupting from the boil can cause whirlpools to from around its outside perimeter.  This boiling place reminds me of a tidal surge behind Vancouver Island called Skokemougan the roaring through the woods for the awful sounds that can be heard by paddlers from long distance (when no tows are in the area).

If you see tows and want to avoid big waves, simply pull off into one of the eddies and await the passage of the tow.  The biggest wave trains will remain in the fast water on the other side of the big eddies & boils.   At high water you can avoid this place completely by staying LBD below Jug Harris and entering the back channel behind Island 67.  But here another alarming reality sometimes is presented: as the water nears flood stage 44HG watch out for upstream tows that sometime elect to also cut the corner using the back channel.  You won’t ever forget the first time you see a tow outside of its normal defined boundaries between the buoys.  Its like the alarm you might feel if one day you suddenly noticed a freight train rolling along down the highway you were driving down.  It will cause an adrenaline rush and send chills up your back.

This speaks to the ephemeral nature of the river where even the biggest and seemingly most hard-rock truths (such as towboats inside the navigation channel) are subject to adoption & change. [CLICK HERE: Islands the tows sometimes travel behind] 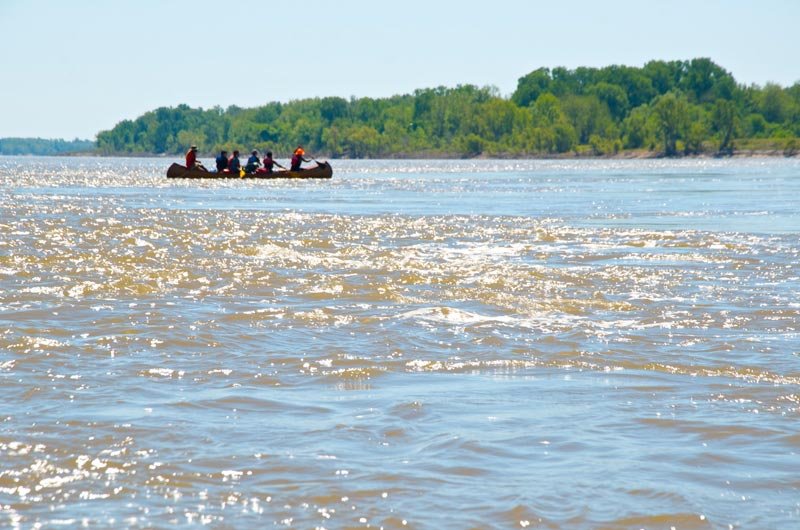 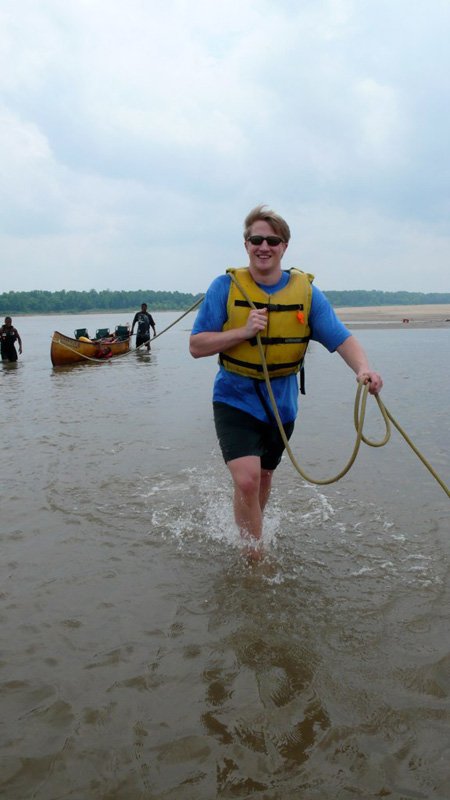 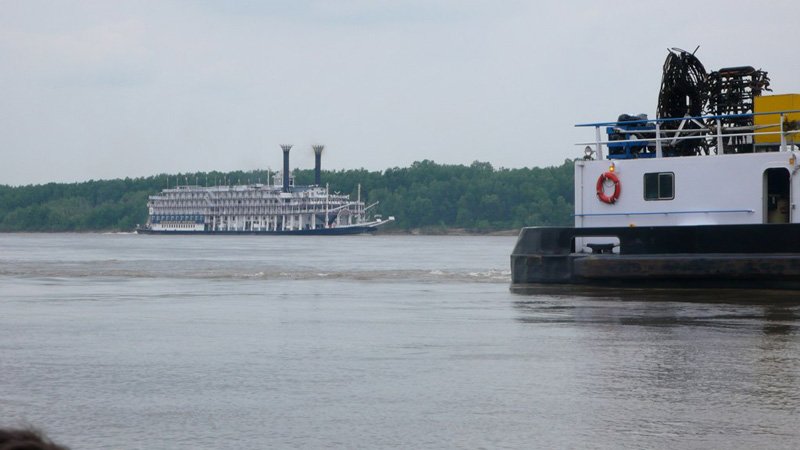