Not surprisingly the river is forever trying to break through its banks at Wood Cottage and below.  In the twenty years of paddling this area I have seen countless bank stabilization projects and watched the river swallow up everything left by man, one season removed, the next season replaced by big Corps Boats and machines, the next season again removed by high water, such is the constant see-saw relationship between man and the river.

An interesting landscape is found along the river here, the muddy flats scoured and sculpted by the water which frequently overflows the banks, in places looking like the muddy plateaus above Utah’s Desolation Canyon.  A blue hole was carved into the thick black sediment just over the rip rap near mile 618 one year, and if you hit it at the right river level you will find a pool of clear water with the freshest swimming in the deep south, it’s reminiscent of a Florida spring water pool when the water is just right.  At other times, however, it will be submerged in muddy water or left a rank pool covered with slime.  The Mississippi River is all about timing.

Hardwoods stand tall along the remnants of the old levee, and smooth mounds which imply ancient Native American earthworks underneath.  The old levee has been broken many times, but you can see pieces of its dark muddy shape underneath the foliage, look for the tallest stands of trees and there it will be seen.  As you round the bend past Keith’s Landing the old levee merges with the river at a place that has been broken in two big floods.  Keep reading below…

The Mississippi River broke the levee here on the Arkansas side in 1912 and then again during the great flood of 1927 and a blue hole survives as reminder to the power of water overtopping an obstruction.  A blue hole can be created anywhere flowing water is made to climb over something and roll down the other side, such as a pile of heavy driftwood, or a wrecked barge, or a dike or a pile of rip-rap — or by the levee itself as it did at Mound’s Crevasse (1927) and here at Knowlton.  As it comes rolling down the other side it falls and digs in deep into the mud & sand and scoops it all out.  After the water level recedes a hole is left behind which clears out with blue water.  At Knowlton the blue hole created a small oxbow shaped lake, probably in the shape of the levee at the time.  2,000 people were left homeless in this area in 1927 and at least 18 perished before the waters finally drained away.

Today there is a high bluff of big-grained creamy yellow sand and gravel piled up between the river and the oxbow blue hole.  Its the highest ground in the region, not going under water until well above flood stage, which means it was created in a much higher water event, most likely by the flood of 1927 itself.  (Note: the flood of 2011 submerged everything between the levees along this entire section of river).  You won’t want to camp here, because its private property and there is frequent travel & hunting due to easy land access from the nearby Arkansas levee for 4WD.  Regardless its an interesting place to stop and get a view of the river from a high place.  This used to be the best rock-hounding in the area but recent high waters have been submerging the gravel bars in sand.  In the past twenty years we’ve seen conch fossils, bison antiquus bones, other mega-fauna long bones, chrinoids, geods, coral, and rocks of origin from everywhere upstream such as Rocky Mountain marble, Great Plains granites and Appalachian shales — as well as strange globs of petrified river mud (not found anywhere else but the Lower Mississippi Valley).  This gravel bar used to extend from the Knowlton high point mile 617 all the way down to the top end of Island 69, but in recent years the gravel has been disappearing.

Island 69 is an archipelago of Islands which inhabits the inside a long bend of the river, its pieces running seven river miles downstream of Knowlton, Cessions Towhead on one side, the bottomland fields and farms Arkansas’ Snow Lake on the other.  There is a large back channel behind Island 69 that has some flow around 15HG but opens full throttle around 25HG.  This Back Channel further splinters into a Secret Old Back Channel (see below) and then also flows through several sandy islands below its lower dikes, and then finally ducks behind a lower splinter island (opposite Dennis Landing)which becomes the furthest extension of the whole.

Island 69 is a low-slung island which goes completely underwater around 35HG.  Excellent Low Water or High Water Camping around outside edge near forested tops, but also along inside channel wherever you see a sandy dune.  At low water there are endless choices for campsites along miles of beaches, make the usual precautions for any changes of weather or river level.  At medium water level you can approach the top of the island and then go with the flow down either side to find the sandy tops of a large dune that extends down the middle of the whole.

As you continue around 69 into the right-angle bend below, watch for unusual towboat activity, this is another place where the river gets squeezed and the resulting current responds with turbulence and unexpected explosions of whitewater activity.  During low water the tows will employ the flanking maneuver to safely negotiate.  CLICK HERE: The Flanking Maneuver] 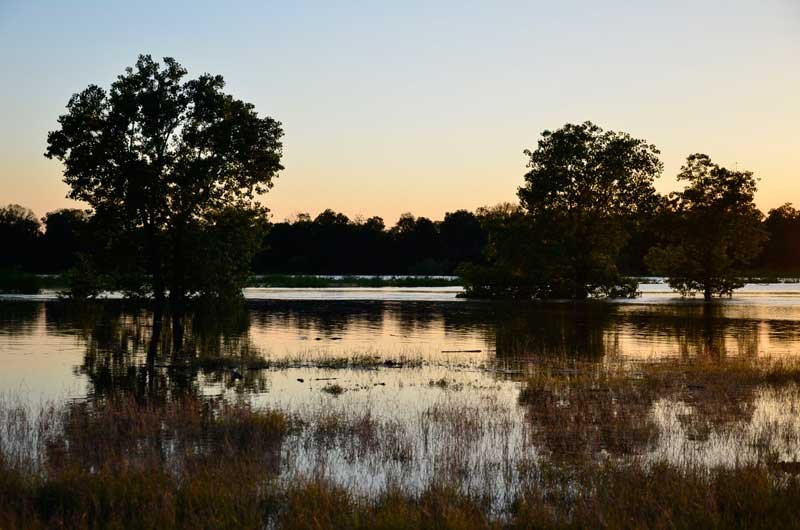 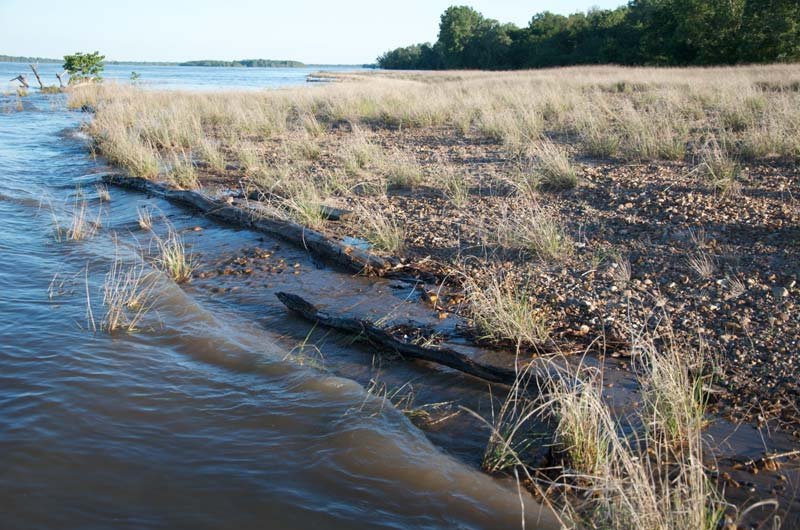