After dark paddlers enjoy an excitement unique to the Mississippi River.   While you are enjoying the beautiful skies and moody waters of sunset and your day is coming to a peaceful conclusion, on board the tows a much different scene is taking place.   The crews are changing places and preparing for the overnight travel.   While one shift is going on break the other is getting fueled up with plates of downhome southern cooking and gulping cups of coffee to help stay awake through the long dark cold night ahead.  Everyone from the pilot to the engineer to the oilman to the deck hand switches places with the other man responsible.  Tows run 24/7 not stopping for Christmas or any other man-made occasions.  On the tow its go, go, go, go.  As the tows continue running the river they fill the watery night with the colorful reflections of their running lights as they wend their way up and down the channel, reds starboard, greens port, incandescent blue midship forward, a vertical line of soft yellows behind.  Using these colors the knowledgeable paddler can determine exactly what side of the tow they are seeing and which way it is headed, as could any mariner.  At times tow pilots throw on their powerful stabbing spotlights which can illuminate a riverbank a mile away and make strange dancing white-light reflections whenever their lights cross your camp.  After a few hours however the excitement wears off and then later as you lay in your tent and your sleep is interrupted by repeated explosions of brilliance it can become startling and then downright annoying.  This is just life on the Mississippi, not as Twain knew it, but as we experience it today.  Suggestion: don’t place your tent directly in the line of fire, such as below the channel signage, or at the end of long straight stretches of river.

A funny incident took place at this location one night with a group of people I was camped with.  After landing everyone had chosen campsites.  One young couple walked far down the main ridge a half mile or so for some privacy.  After an enjoyable campfire supper and an evening of star-watching and story-telling, river-worn but happy paddlers wandered off for a incomparable sleep on the banks of the river.  Eventually I did the same.  Later I was awoken out of my sleep by the sound of running footsteps —  or better said, the feeling of the vibration of running coming through the sand.  I could feel it coming under me. It was the man of the couple and he was out of breath.  He had run half mile from their tent site because they had seen spotlights stabbing the darkness from across the sandbar.  He was sure that it was the police looking for prisoners who had escaped from the state farm!  They knew that we were fairly close to the largest penal colony in the North America, Parchman Penitentiary (30 miles to the East).  Evidently this impressionable couple had seen too many movies like Brother Where Art Thou and jumped to immediate conclusions thereof about being in the south on a humid southern summer night!  Some people pack pistols or other firepower due to fears like this but I never have — and have never had cause for one.

At low to medium water levels this giant bar is connected to the forested mainland beyond (Concordia Hunting Camp) and periodically ATVs scurry across the bar, usually during hunting season.  Above 30 water starts filling in a series of lowland holes and wetlands behind the central plateau and the sandbar becomes an island, as the water continues rising above 35 a spectacular back channel becomes accessible to the paddler, keep reading below.

When the river rises above 37HG an incredibly beautiful and wild-feeling secret back channel opens up behind Smith Point and is well worth entering and following down its two mile course behind the giant plateau of sand at the top of Smith Point Sandbar.  It takes some expert paddling and orientation to find the narrow opening, but once you’re in anyone could follow it as it flows along lazily and happily behind the view of towboats and river traffic this secret channel full of turtles, birds and river-loving mammals like coyote and deer.  This area is a favorite haunt of the notorious feral pig, the wild boar.  Look for signs of it in grassy places that have been unprooted.

If the river’s above 37 HG the secret channel will be open.  Here’s how to find the entrance:  As you paddle past Smith Point Light RBD 601.5 roll around the big eddy below and then curve further inwards and than hard paddle all the way back to shore LBD and stay with the edge of the thick wall of willows as it rounds southward downstream.  The opening is approximately one mile below Smith Point Light.  Eventually you will find a break in this willow forest, an inlet below a boiling place.  The boils are being caused by Dike#1 which is now overtopped by 20 feet of water.  Paddle over the boils and follow the water into the inlet as deep as you can go, to the East.  You will notice the river water is now flowing into a thin line of willows that block this channel at lower water levels.  At first the channel is only 30 feet wide.  If the water’s flowing in, that’s your sign, the secret channel is open.  If there’s no flow its not open.  Watching carefully for snags or driftwood strainers that sometimes pile up at the entrance.  Use your best paddling technique and cut through the narrow opening and through the willows and then go with the flow as the water rounds a series of dunes and big hummocks of forested mud.  After a few turns the channel opens up maybe doubling or tripling in width, and then turns southward along some broad beaches behind some lines of tall standing cottonwoods.  Below the beaches it closes up again and gets broken by contours of the landscape, but then regains its shape around a few more bends and makes its way again southward along the last giant ridge of sand descending downstream towards the exit back into the main channel of the Mississippi.   Towards its bottom end the channel opens up wider and wider, becoming shallower as it does and spreading out over the sandy desert of Smith Point Sandbar.  Oftentimes I have happened upon herds of deer as well as flocks of geese, red-winged blackbirds, and various ducks.  During the spring songbird migration this area is a birder’s paradise. 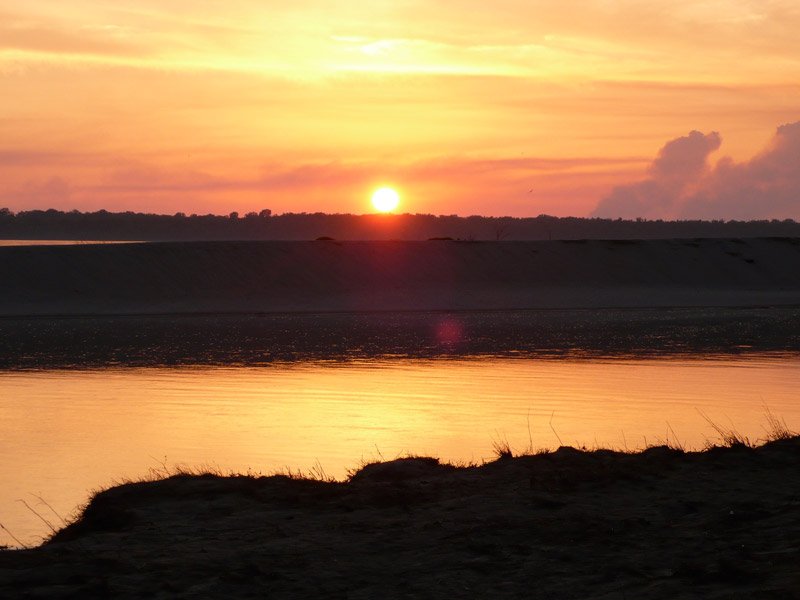 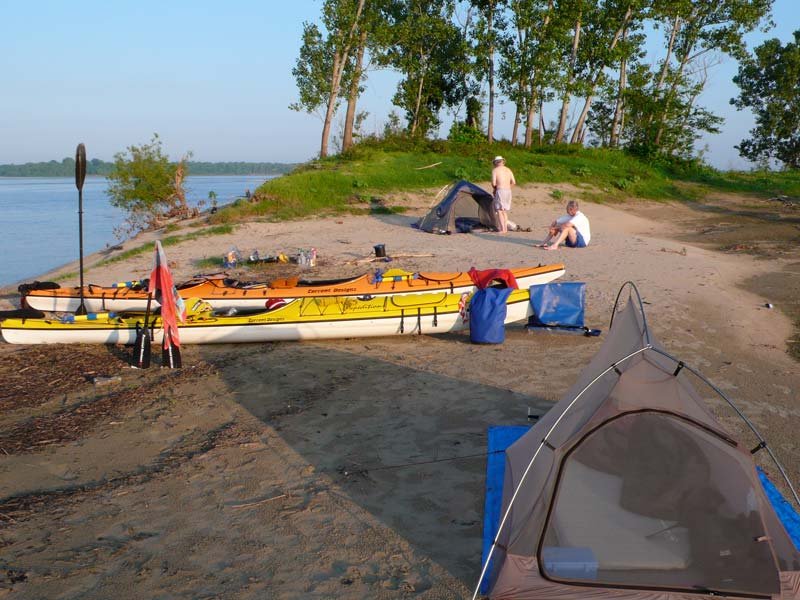 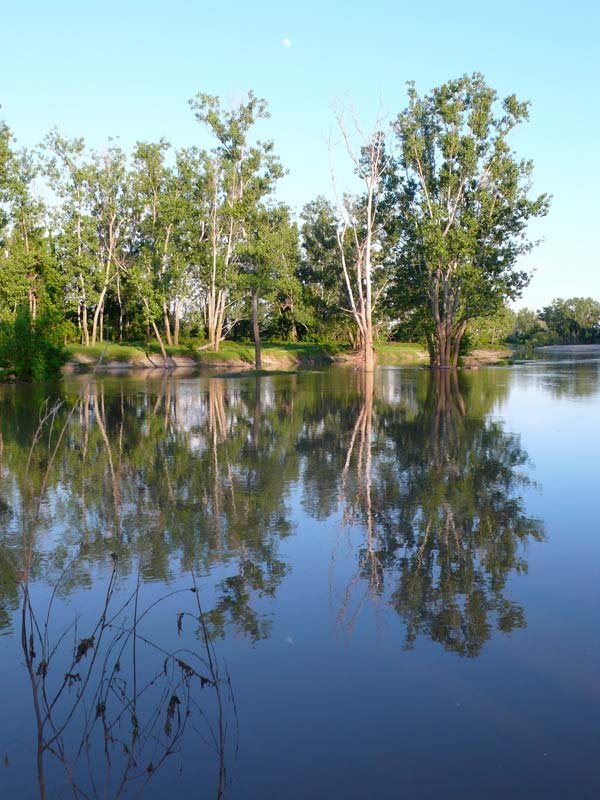 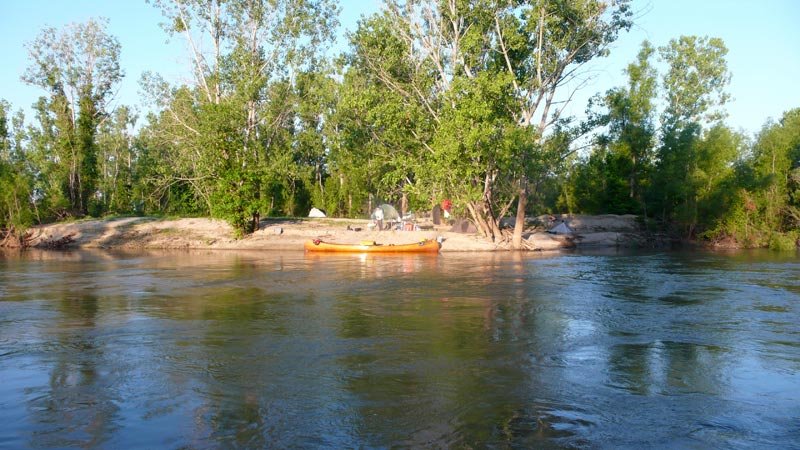