Another solution to the monotony of the long-distance paddler is a stop on Catfish Point Bar.  If the weather’s calm, and you need a good rest place to stretch you legs, pull into Catfish Point Bar.  It can be a long paddle getting into this giant sandbar from the main channel, and a long paddle getting back out into the current.  But you might as well get used to it: everything is super-sized here!  (I.e. its going to be a long paddle no matter what you do).  At low water Catfish Point Bar curves upwards of five miles inside Cypress Bend with a large gravel bar top end .  The gravel bar transitions into beautiful low-angle yellow-white sand beaches mid island, which eventually steepen into a cut bank bottom end topped by clumps of willow & cottonwood trees.

If you like rock hounding and fossil finding explore the gravel bar top end, which creates a rugged landscape in between dike #1 and dike #2.  This gravel bar changes from year to year, with each flood a new landscape is created, layers of sand & gravel scoured and then relaid.  So the excitement never wears off.  If you find any fossils of note, record them with your camera and tag them with your GPS and send to the Mississippi Museum of Natural Science whose paleontologist keeps maintains records.  If you are ready for a cool-down splash in shallow water, the beaches mid-island are incomparably open and shallow, and the water flows over them slow and even, and in general slightly warmer than the deeper water beyond.  [Click Here Safe Swimming].  Good place to set up the volleyball net or lay out your towel for some tanning (if you are in need of any more sun than you are already getting!).  On the other hand if all you need is a little shade for a picnic or a mid-day siesta, go bottom end and pull in below one of the clumps of trees and look for the winning combination of shade and gentle breezes off the water.  If you select your place carefully you can find both.  Look for a couple of trees atop a sandy bluff or ridge high enough to catch the breeze, but leafy enough to produce shade.  Lastly gauge the swing of the sun across the sky and choose accordingly.  Its no fun to fall into a peaceful slumber only to be awoken with the burning sun in your face.

Note: Boat ramp not marked on the US Army Corps 2007 maps.  Unimproved public gravel landing off the end of a stub levee above Arkansas City.  You won’t always be able to drive to the water’s edge, but paddler’s should have no trouble finding access at any water levels.  Low water leaves the bottom end of the ramp covered in a muddy bog.  High water means finding access off the stub levee.   A great daytrip including a stop on Choctaw Island could be be made using this as your put-in, paddling downstream to the back channel of Choctaw Island, making a picnic stop on the top end or backside of the Island, and then taking out at the Arkansas City Boat Ramp (halfway down the back channel).

The old steamboat era Chicot Landing is further downstream, just above the entrance to Choctaw back channel.  The splinter islands crowding the right bank around mile 565 are still covered with gnarly flood ravaged forests and piles of driftwood that when covered in water become ugly snags — and confirm the name given by early French Voyageurs, chicot meaning teeth.

The catastrophic Holly Brush Crevasse occurred near here and submerged all of southeastern Arkansas in the 1903 flood.

You can learn a lot about the Mississippi River using Google satellite maps, bearing in mind certain parameters.  Firstly the Google map-images were recorded from space during a season of low water, hence the islands and sandbars are at their largest, and many back channels that are open at higher water levels appear to be closed.  Unlike highways which don’t change shape or position with the seasons, the islands of the Mississippi River and their back channels are dramatically effected by water levels.  And so the paddler needs to remember that the shapes of low-lying landmarks like the sandbars and wetlands seen on Google Satellite Maps or Google Earth is probably not what they are really like on any given day when you are out on the river.  Be forewarned not to assume that the perfect-looking sandbar you see on you iphone will be there!

Secondly, river levels change with the Google Maps zoom. (Evidently Google used photos from at least 2 different time periods, hence they have recorded the river in two vastly different river stages.  I am certain this was inadvertently done).  Take Choctaw Island for example.  When you go to Satellite view for the Mississippi River near Arkansas City you will see that Google employs various depictions of Choctaw Island.  (I have created map at:  [CLICK HERE: Map of Choctaw Island])  Use the zoom tool to change scale.  Pay attention to scale icon at bottom left.  At zoom 1 = 1 mile and above you can see the back channel partially open & flowing well.  The water level is probably around 3AG.  However change the zoom to 2 = 1mile and lower you will see the back channel almost completely occluded by sandbars.  The water level in this depiction is certainly -4AG or lower.

However, even accepting the fact that Google Satellite Maps aren’t real time images, many river attributes and lessons to be learned.  For instance:

Towboat Activity:  You can see towboat activity on Google Satellite Maps.  Look for long rectangles slightly off color at various positions when you zoom in on any one bend or straightaway.  You can distinguish which direction they are going by their outwash.   Now you can tell upstreamers from downstreamers.  You can study the lines taken by the upstream pilots, who are looking for the slowest waters to conserve fuel.   On the Choctaw [CLICK HERE: Map of Choctaw Island]  zoomed close-up map you can see two upstream tows hugging the channel at bottom end of Choctaw Island, close enough to the island to find the slower waters but far enough out to not get grounded on the shallows.  Conversely, on the zoomed-out map (scale 1 = 2 miles) you can faintly see a downstream tow opposite the bottom of Choctaw using the current along the outside of the bend.

How could this be helpful to the paddler?  Number one, you will know to stay on the opposite shore (left bank descending) if you are coming down the river around Choctaw Island (or most other islands) and see an approaching upstream tow.  Not only will you avoid the tow pilot’s line of travel, but secondly you will be enjoying the advantage of the fastest water possible. 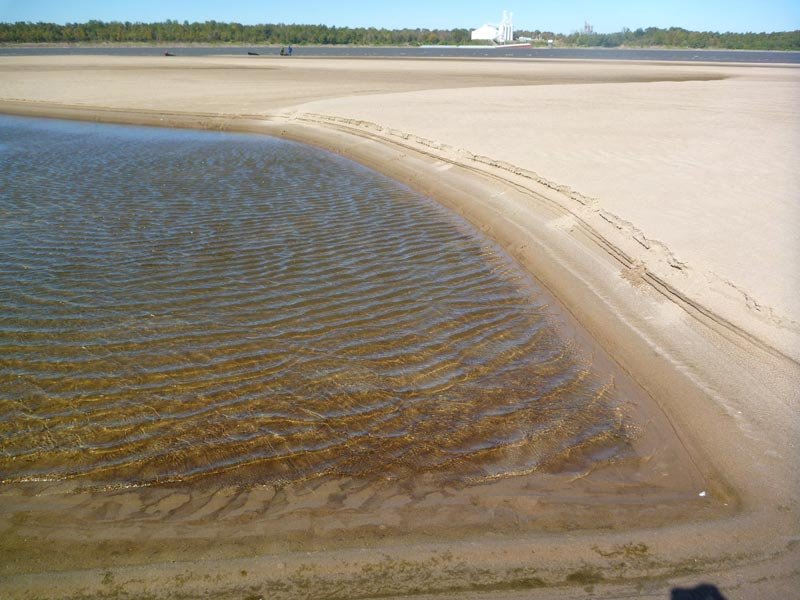