The 1475 mile long Arkansas River drains all of the Great Plains from Kansas down to the Texas Panhandle, including most of Oklahoma, and everything west to the continental divide of the Colorado and New Mexico Rocky Mountains.  It’s the biggest and longest tributary of the Lower Mississippi River (and the largest drainages basin), it’s water volume sometimes swells to 200,000 cfs during flood water stages.  This makes it one of the five largest and longest rivers in the continental United States.  But even so the rugged Arkansas pales in comparison to the mother Mississippi which swells to over 2,000,000 cfs during flood stage, a ten-fold order of difference!

The Arkansas River reaches into such far flung locales as Leadville, CO; Dodge City, KS; Cimarron Canyon, NM; and Oklahoma City, OK.  It drains snowmelt off the highest Rocky Mountain peaks, Mount Elbert and Mount Massive, and the cliffy crags of the awe-inspiring Collegiate Range.  Its headwaters create a whitewater rafter’s paradise.  The busiest whitewater river in the world is found on the Arkansas River near Buena Vista Colorado.  As the Arkansas cascades out of the Front Range it carves a deep slickrock canyon (including the famous Royal Gorge), and then flattens out and begins to meander after spilling through Pueblo and becomes the great river of the Southern Great Plains.  After curving across the Colorado Plains it enters Kansas and almost disappears into its sandy bed as it siphoned dry by neighboring towns, farms & ranches.  The poor Arkansas regains water as it descends down the rolling hills of Oklahoma and begins receiving waters from tributaries draining the Ozarks.  At Tulsa it widens considerably and enters the so called Kerr-McClellan waterway created with the pools formed by 18 locks and dams.  After it enters Arkansas near Fort Smith it divides the two major ranges of the Arkansas Ozarks, the northern plateaus from the southern ridges.  When it flows past Little Rock it enters its final floodplain, but maintains its distinct color and shape all the way to its Mississippi River Confluence.

It could be called the Comanche River.  Almost its entire drainage was once ruled by the mighty Comanche nation.  The legendary warrior chief Quanah Parker ruled its watershed in his lifetime.  It also drained the homeland of the Quapaw, the Kansa, the Kiowa, the Wichita, the Chakchiuma, the Caddo and the Jicarilla Apache.  The Arkansas was the major highway for travel & trade throughout the mellenia following the last ice age.  Today it drains the remaining reservations of some of these people, mostly within the state of Oklahoma.  The self-named downstream people the Quapaw, once ruled the mouth of the Arkansas River with a collection of four cities numbering between 3 and 5,000 people when Jolliette and Marquette reached them in 1673.  Their numbers severely declined thereafter subject to European diseases.  The Quapaw were the southernmost of the Sioux nations — who once inhabited the Ohio River Valley.  When the Sioux nations migrated westward the plan was to turn up the Mississippi River and gain entrance to the open plains to the west via the Middle Mississippi and the Missuori Rivers.  When the last nation reached the Ohio River confluence a fog descended and they missed the turn and instead floated hundreds of miles downstream in their wooden dugout canoes until finding a suitable settling place to relocate at the Arkansas River confluence.  Hence they became the downstream people, a literal translation of their name, the Quapaw.  One of their counterpart tribes, became the Omaha, the upstream people.

Paddling Past the Mouth of the Arkansas

If you are motivated to get downstream as expediently as possible, keep paddling hard and stay mid channel as towboat traffic allows.  Upstream tows will be found chugging up the slower water RBD closer to the mouth of the Arkansas (and then hugging the bottom of the Arkansas Bar, usually crossing somewhere near the Rosedale Harbor opening); stay along the outside edge line around Prentiss Bend left bank descending and then follow the buoy line out into the big open channel below.  As stated above, the river opens its gargantuan mouth wide open at this meeting place, and it feels like you might have reached the end of the river where it spills into the Gulf of Mexico (still 600 miles downstream!)  Congratulations: this would an historically accurate feeling.  This is what Joliet and Marquette felt when they reached the confluence and decided that they could turn around from this very same place satisfied that they had determined the river would end in the Gulf.  (It also helped that the friendly Quapaw people warned them of certain demise by the Spaniards and their affiliated tribes downstream).

The confluence is found where the Arkansas Bar ends.  If there are no tows in view you can paddle along the green buoy line RBD as you round the Arkansas Bar, and keep going until the sandbars recede, the mudbars become submerged and the treeline ends.  Paddle in further right bank (north) when all firm landmarks disappear — and you will find yourself awash in the sea of muddy water.  As with all things along the Lower Mississippi this exact location can’t be pin-pointed with GPS because it changes with the water level and the shifting of the landscape.  When both rivers are low a large flat sandbar forms at the mouth of the Arkansas full of snags and ragged masses of logs and other drift, and the waters of the Arkansas narrow to one or two shallow channels flowing through.  When the Arkansas rises it occupies the entire confluence and charges into the Mississippi with joyful enthusiasm.  Never to let anyone get the last word, the mother Mississippi teaches her young upstart a few lessons: when the Mississippi is high it floods the entire region and forces the Arkansas backwards dozens of miles up its channel!

Furthermore, the confluence periodically shifts with floods and the dynamics of these big rivers.  Click on the map I created for the Mouth of the Arkansas Round Trip [CLICK HERE: Map of A Detour Up & Down the Arkansas] .   Look at it in Terrain, and then go to Satellite.  You will see that the Arkansas River channel occupies different channels!  This is not a mistake on Google’s part.  What you see in Terrain is from the 1972 USGS survey.  Since then the Arkansas has chosen a new path and carved out a new confluence location two miles from the older one (which is what is seen on Google Satellite).  This is the nature of this ephemeral river-scape.  It will be interesting to see how the current Arkansas River channel changes in the upcoming years, and how well Google will keep up with it. 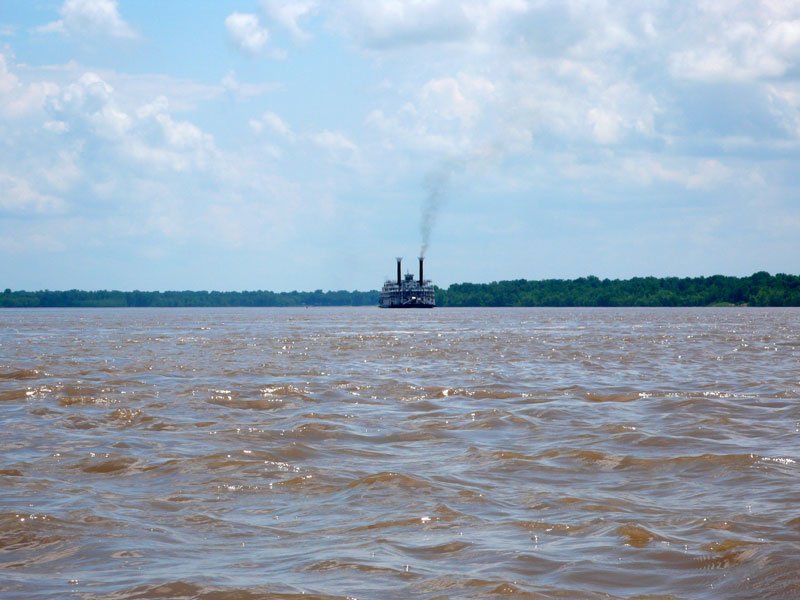 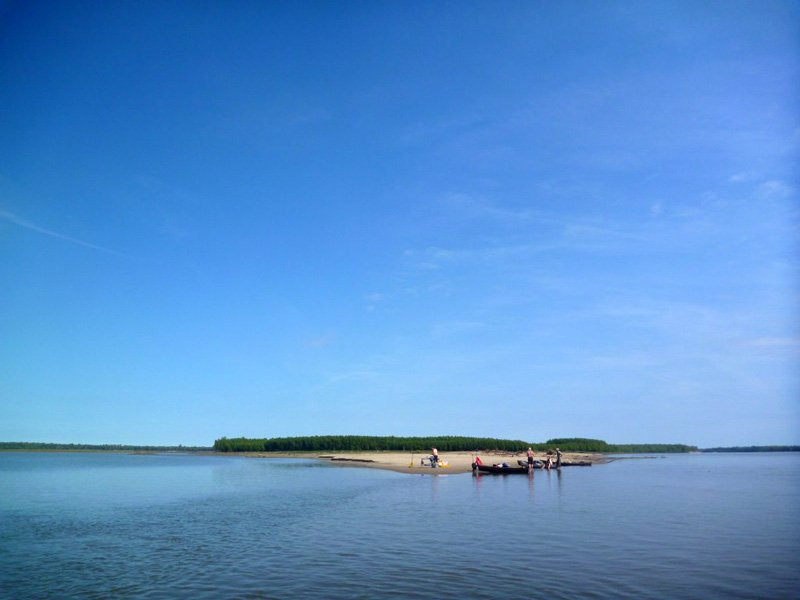