As you come out of Cypress Bend stay with the fastest waters along the outside of the bend right bank and whisk past Chicot Landing and the bottom of Catfish Point Bar.   Several miles downstream the top end of Choctaw Island will be coming into view.  The main channel of the river opens up into a wide morass of flowing water almost as wide as the entire downstream horizon.  As you float along a giant sandbar begins to take form along the curve of the earth.  This is the top end of Choctaw Island, so enormous it makes the Mississippi River split both ways!  If you’re planning on ending your journey at Arkansas City, you’ll want to enter the back channel with the wedge of water flowing south behind the island.  If you’re continuing on to Greenville or the Highway 82 Bridge near Lake Village, you can paddle either side of the island.  Main channel might be faster, but of course its not as scenic.  Back channel stays open until the lowest of lows.   Keep the paddler’s mantra in mind, if its flowing in, its flowing out.  Even if there is no noticeable flow you still might want to explore the wildlife rich back channel.  Watch for shoaling and be ready to drag your vessel if necessary.

The river rolls around Cypress Bend and dives into the depths below the base of Catfish Point Bar; from there it picks up speed and momentum as the river bottom shallows above Choctaw Bar Island.  During higher water levels anything pliable (such as sand or gravel) or plastic (such as mud) gets uprooted from the bottom of the river and is plastered over the increasing shallows above Choctaw and then pushed south in giant sugary piles over the entire 4 mile perimeter of the top of the island.  You can see the effect from Google Earth.  It looks the island has been hit by a snowball of sand, long trails of yellow/white sand lead out of the desert top end and wander south into the muddy middle beyond, where the elevation drops just enough that all of the sand is left behind and only muddy waters enter, and then become stationary and deposit their silty load.  Grasslands have grown around the perimeter of this open belly wetlands, and above the grassy ridges is where the land rises enough to support more permanent species of hardwoods, the trees that don’t like their feet in the water but a month or two out of the year, if at all.  Continuing south down the length of the island various narrow finger channels collect the floodwaters out of the muddy belly of the island and funnel them roundly south and then southeast parallel to the main channel to empty out near the bottom end of the island.  After the river drops you can walk down the lower island over these alternating ridges and gullies, tall trees on top and murky plankton-rich green stillwater in between.  Frogs abound in these pools of captured water.  During spring mating season (March-May) the night air resounds with the emphatic calls of this amphibious chorus, at times so loud you can hear them from miles away.  If you set your tent nearby you will awake the next morning your head buzzing from the effects of the all-night party!

Choctaw Island, the superlative Mississippi River Island for voyageurs, consists of every floodplain landscape possible: giant beaches, large meadows, extensive woods, wetlands, and muddy banks.  The shoreline is as close to the Caribbean as you’ll find in the middle of America.  The interior sand dunes and sandy plains are reminiscent of the Sahara, especially on a scorching hot summer’s day.  The grasslands will remind you of the Serengeti.   But the forests are similar to any Mississippi Valley floodplain forests: a mixture of various hardwoods along the higher ridges, hackberries, oaks, sweetgums, sycamores & cottonwoods, falling away to willows lower, and thick privets bunched and overhanging in the wooded wetlands.   The animals love it, the birds love it, the paddlers love it.  Seen from the air Choctaw Island is shaped like a fat seal leaping out of the water.   The 6 mile shoreline main channel and 4 mile back channel envelope 8,000 acres of paradise.  An intrepid paddler might make the complete 10 mile circumnavigation for a challenging but rewarding daytrip.

The best camping on Choctaw Island is either top end backside, where the sandy beaches meet various clumps and ridges of trees thriving on top of their relative heights, or bottom end main channel 559-561 where the muddy cut-bank gives way to a broad sandy beach and dunes of sand rolling through the willow forest.  Of course water level effects everything and you can camp anywhere you can make a decent landing.   Paddlers ending their water trail adventures at Arkansas City could make one last camp on the top end of Choctaw and then take-out the next day at the back channel boat ramp, which is about halfway down the channel, dropping down from a parking and camping are that sits on a tall wooded bluff several hundred yards below the last wing dam.

Locals maintain Choctaw is one of the steamboat islands — that it was created by the sediment accumulating downstream of an old wreck, in this case the steamboat the Indiana which sank in 1875.  Thanks to this re-generative location (and subsequent support from the army engineers) Choctaw has maintained itself against the raging river.  Compared to other river islands it retains its essential shape and size regardless of water level from low to medium, and only loses its massive size at levels above flood stage.  The big dike sealing off the back channel top end was intentionally cut open with a wide gaping notch and runs strong until the water drops to 4AG.  There is a water connection that can be paddled through all the way down to -3AG and maybe even lower following the scouring of the Great Flood of 2011.   At medium water there is a strong current through the back channel and the top end sandbars begin to disappear.   At high water an isolated sandy island gets separated from the main island and is formed in the top end back channel, but on the main island there are still hundreds of acres of wonderful camping anywhere around the top end and miles of beaches.  It is the tallest island in the area.  When most other islands between Memphis and Vicksburg are completely under water at flood stage Choctaw still has plenty of sand and thousands of acres of dry ground can be found in its meadows, woods and on the beaches. 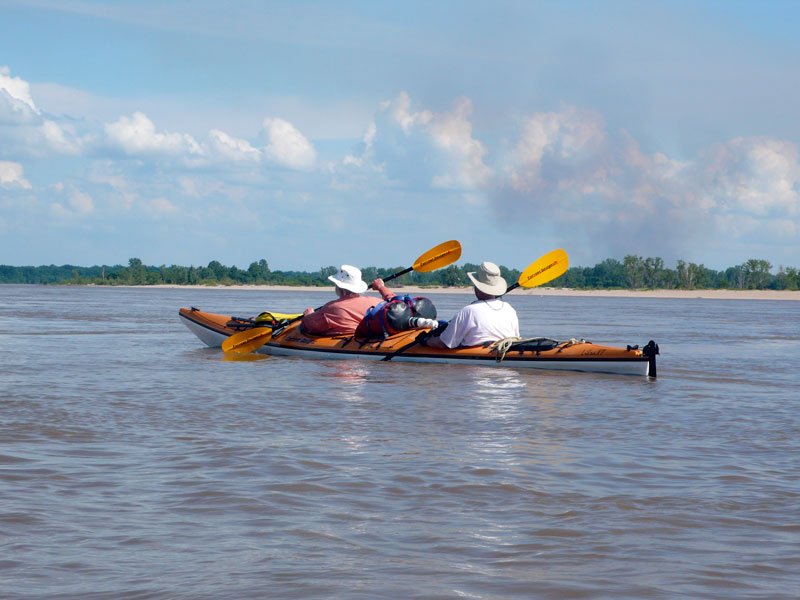 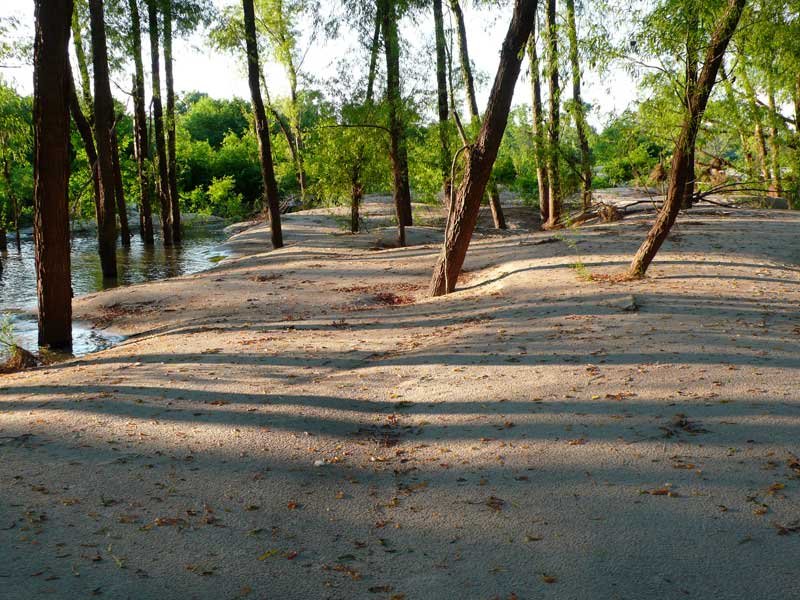 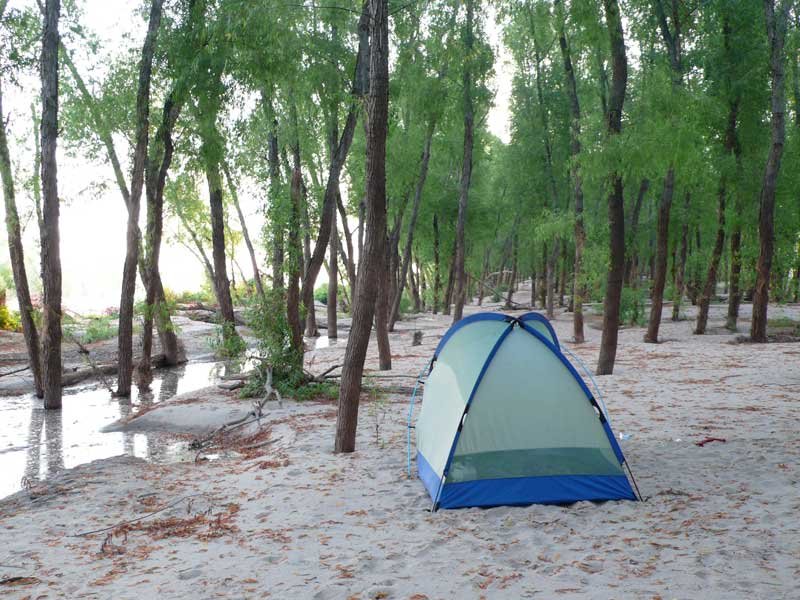