Less than a century ago the river swirled around two enormous loops of river each ten miles long one around jackson Point and one around Island 66 opposite Sunflower Landing.   In the early 1940s these loops were cut-off to straighten the river.  As result as you paddle downstream of Island 64 the river traveller experiences a reversal of state lines — for a short distance Mississippi is found on the right bank and Arkansas on the left!  This could be a geography lesson for all youth in the Mid South for there are many places that you find Mississippi on the Arkansas side of the river, and many places where Arkansas is found on the Mississippi side, but there is no other single location where there are reversed in the same place.  This reversal lasts several miles between the Jackson Cutoff Light (628) and the Mouth of Mellwood Lake (625.6).

The old rivers channels are today preserved in two giant oxbow lakes known as Mellwood and DeSoto, each of which circumnavigates extensive forests and are still connected to the main channel of the river through deep muddy trenches known as the mouth of Mellwood lake and the mouth of DeSoto Lake, and so the entire area is a paddler’s paradise with endless varieties of paddling dynamics for every level of paddler.  A good Beginner’s route would be to put-in at Hillhouse Landing into DeSoto Lake and paddle as far as the mouth of the river, view the powerful flowing waters, and then turn back to Hillhouse, a 6 mile round trip, you would return home having experienced paddling on the Mississippi without having to endure the violence and vagaries of the main channel.  Advanced paddlers will find all of powerful places already described in abundance, the big river is full of never-ending challenges for those who choose to pursue them.

Historians believe that De Soto Lake’s Sunflower Landing is where Hernando De Soto became the first white man to see and paddle on the Mississippi River.   Of course back then it was the main channel, and from De Soto’s journals it seems like they arrived in the middle of the Spring flooding, since they describe a frothy muddy main channel full of driftwood.  In 1541 he and his ragged army struggled across the swamps of the Mississippi Delta and became isolated on the banks of the river while armies of brightly colored native warriors made daily forays and shows of power from the river, paddling dugout canoes and raining the Spaniards with showers of arrows, some of the canoes carried 60-80 men each.  The size of these giant canoes is a testament to the big trees that were once common to the river floodplain but now have been entirely removed.  [CLICK HERE: for the one remaining old growth cypress tree].  The resourceful De Soto made camp on the banks of the river and spent several months building log rafts to ferry his men across the big river, as they called it, the Rio Grande.

Deep muddy slot (at low water) surrounded by an enchanting scene of overhanging willows, higher up the muddy flats are covered in a delightful forest of sycamores, cottonwoods and silver maples, many draped with flowering & fruiting vines.  Easy access to main channel, classic river pass, rich with wildlife and the aromas of the forest, deep woods at mouth.  Lake connects to river around 7HG, the low banks completely flood around 20HG opening the surrounding woods to paddlers.  Favorite haunt of the lovely pileated woodpecker, who you might hear chopping into nearby standing willows and laughing as you pass, its song resembling punctuated human laughter.  In the heat of a summer day enter Mellwood Pass for respite from the sun, on a blustery winter day do the same for respite from the cold wind.  Possible access via private boat ramp over levee from Mellwood, Arkansas.  Ron & Di’s Marina (870) 827-6498.

There is a series of sandbar islands that have grown up along the lower end of the Sunflower Dikes.  When the river is below 20HG you can make an easy picnic stop on the last of these but beware any approaching storms for there is no protection of any sort.  Not a good campsite, no vegetation, nothing but sand and mud.  Island completely disappears when the river rises above 25HG.

At the end of Sunflower Dike # 3

At medium and high water levels the outermost edge of the last dike forces a borad column of water laterally into the main channel of the river, at which junction a terrible commotion can be heard from far away as the two currents slam into each other and wrestle for dominance.  The comment often heard is where is that waterfall coming from?  The end of this dike is opposite the mouth of Mellwood Lake and is usually marked by red nun buoy, but the force of the water often discharges buoys and their one-ton anchor blocks from this locale.  Or even worse the current forces the buoy under water to become a diving duck — a buoy that charges along underwater pushed down by the unrelenting force of muddy waters — and then suddenly launches into view like a breaching whale.  The impact of a diving duck would surely cripple any canoe or kayak.  Your best bet is to be ever watchful downstream.  If you notice buoys that are there one minute and the next minute they disappear — that is your sign.  Mark the location mentally and keep away!

I’ve personally witnessed the most powerful whirlpools I’ve ever seen at this locale, in high water winter 2011 one of our big 30 foot long canoes almost took a nose-dive into the mouth of a whirlpool that opened up underneath our line of direction, and we got swirled around so quickly that it shook up everyone on board like rags, and we were thrust out of the area going backwards at 10 knots.  This would have surely upset a smaller canoe.  No one aboard wanted to see another whirlpool the rest of the trip, and we were out for a week! 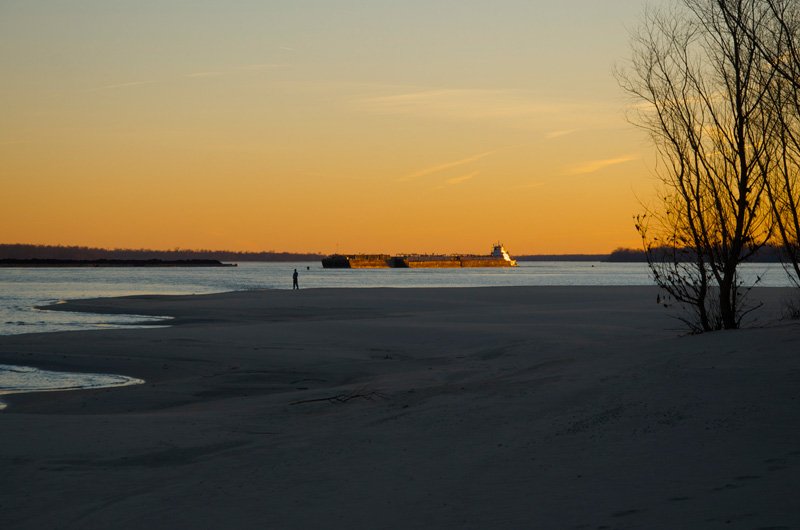 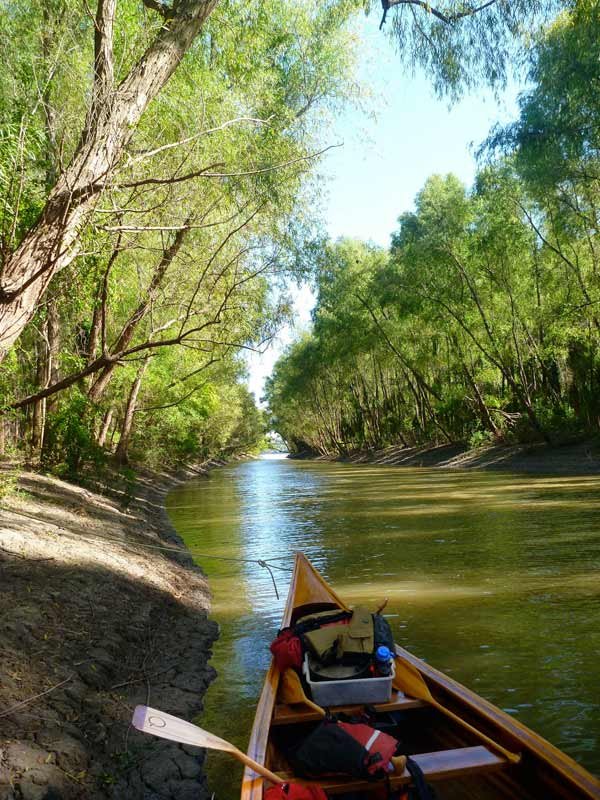 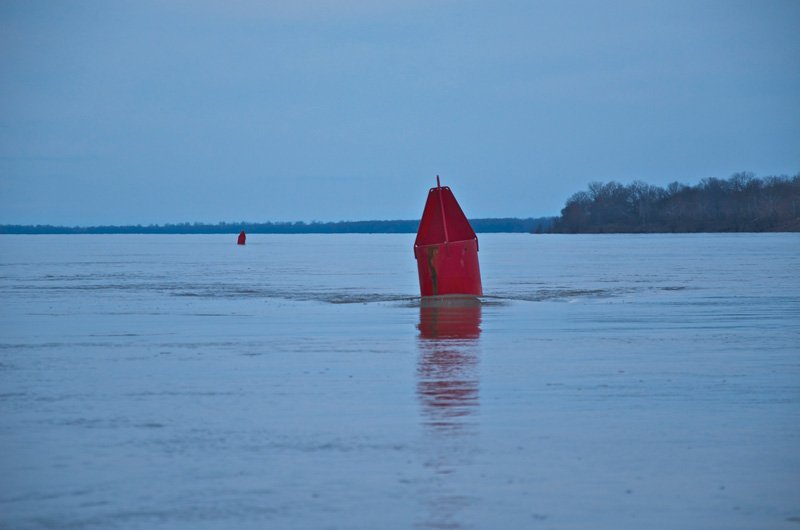