Directly behind Angelo Towhead is the tiny bluff town of Randolph, which features a bar, a church, and several houses.  Poor Randolph, at one time it was the favored location for the major port and city of the area, later superseded by its lowly neighbor to the south that become the City of Memphis.  A towering white cross was erected atop its green fields several years ago.  A convenience store is located several miles up the Randolph Road, but nor recommended except in emergency.  There is a primitive landing below this bar, where an access road dead ends at the river bank, but the landing only functional at higher water levels.  Long distance paddlers beware: You can refill you water bottles and buy beer at John’s Boat Dock, which is conveniently located at the top of the boat launch.  But be ready for some classic southern small town curiosity “you ain’t from here are ya?” which might dissolve into hostility depending on the color of your skin, the time of night, and how many beers have been downed before your arrival.  If you’re black, or any other ethnicity, don’t bother stopping at all.  You will most certainly be offended by some of the awful signage in this redneck hangout.  Don’t camp anywhere nearby.  You won’t want to be anywhere close by after dark.  Lots of good choices further downstream.  Best bet if you need to resupply: keep going on to Memphis.

As you paddle along the Hatchie Bar and then past the mouth of the Hatchie River you will be afforded your first vista of the second natural wonder along this section of river, the 2nd Chickasaw Bluff, sometimes known as Richardson Bluff.  Gaze downstream over your vessel towards the towering loess cliffs.  It’s a little deceptive because of the great distances and the scale of the river.  But you will probably be impressed by how much of your vision they fill.  Even at five miles away The 2nd Chickasaw Bluff covers 180 degrees of the horizon!

At first they are nothing more than a reddish brown line of convoluted earth strung across the river, rising slightly above the blue reflections on the muddy water and over the forested islands.  But as you approach nearer they gain height and girth, with towering ridges that look like rock (but are actually mud) and deep fissures.  For an unsuspecting paddler it’s something like driving across the Great Plains and seeing for the first time the Front Range of the Rocky Mountains rising heavenward.  For a floodplain resident who has never witnessed the bluffs in their raw state you might experience vertigo.  You will be filled with a strange feeling of not knowing where the heck you are, so foreign is the landscape.  The bluffs keep growing and growing until you reach their base where they fill most of the southern sky in a roiling collision of colorful earth-tones, mostly yellows, oranges and reds, but some greens, greys and blues also, that collapse in chaotic sequences of horizontal layers and vertical precipices.  With colors of the canyonlands and the texture of Iceland, it’s something like Utah meets Alaska, the topography reminiscent of a colorful calving glacier at the ocean’s terminus, replete with deep crevasses and deep dark earth cracks that seem to flow in a jumbled course from the distinct razor sharp line at the top of the bluff down through many layers of earth and spilling with gravity to the river’s edge.  Adding to the thrill of this exotic atmosphere is a thick kudzu jungle that covers much of the cliffside wherever it has been able to gain a perch, but also where it has consumed whole trees, filled shallow valleys, and created a green kingdom that could have come right out of the Tolkein’s Middle Earth.  A notable scene is kudzu eating the Randolph Light day marker at mile 770.1. 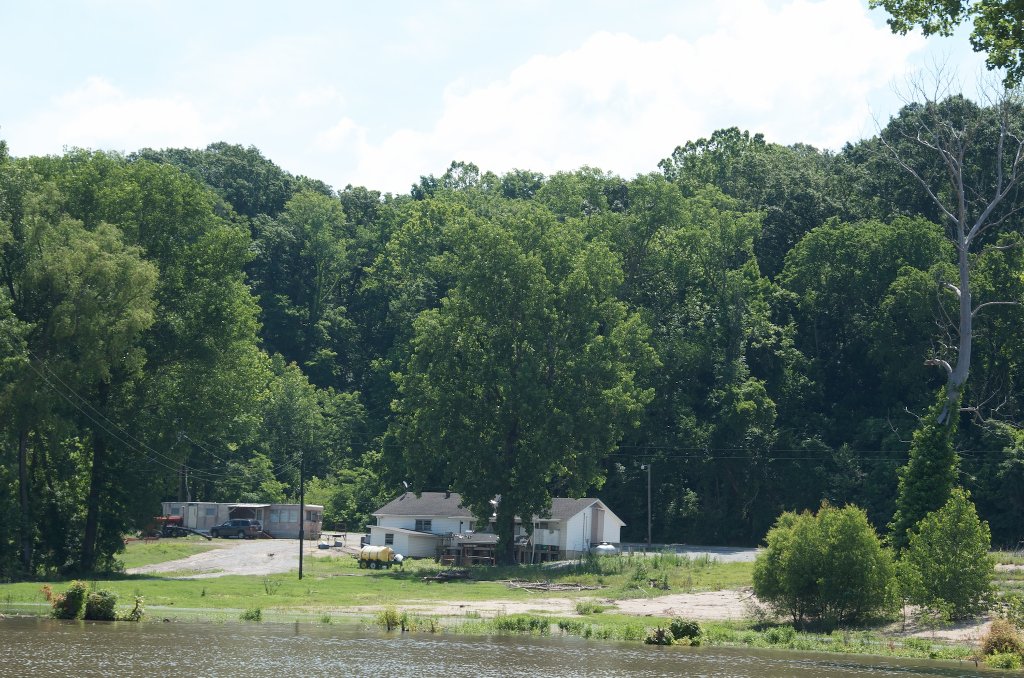 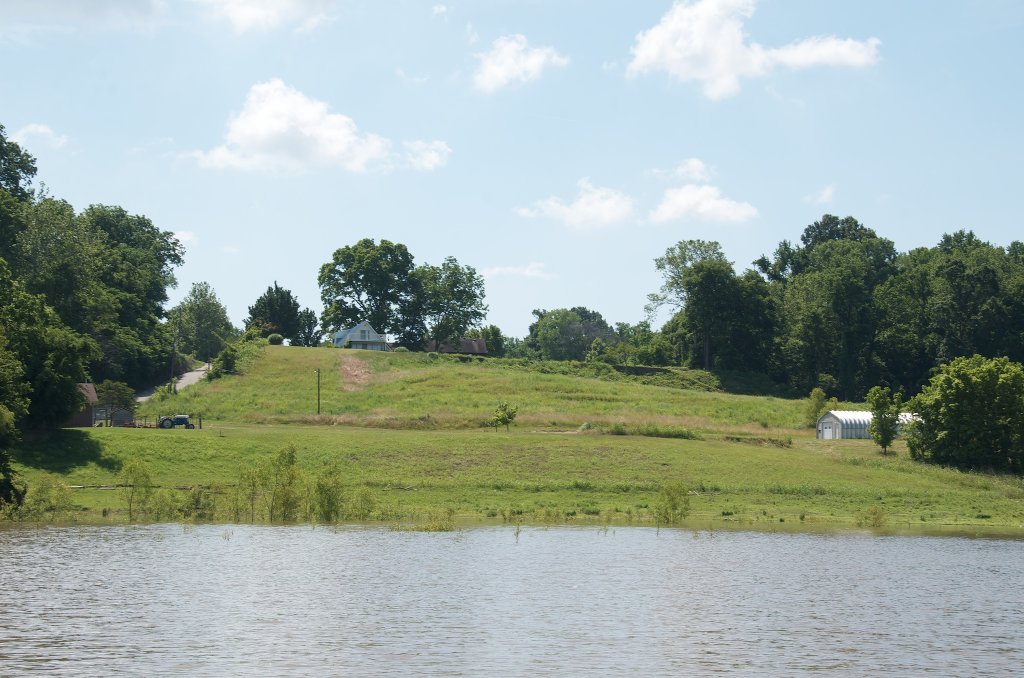 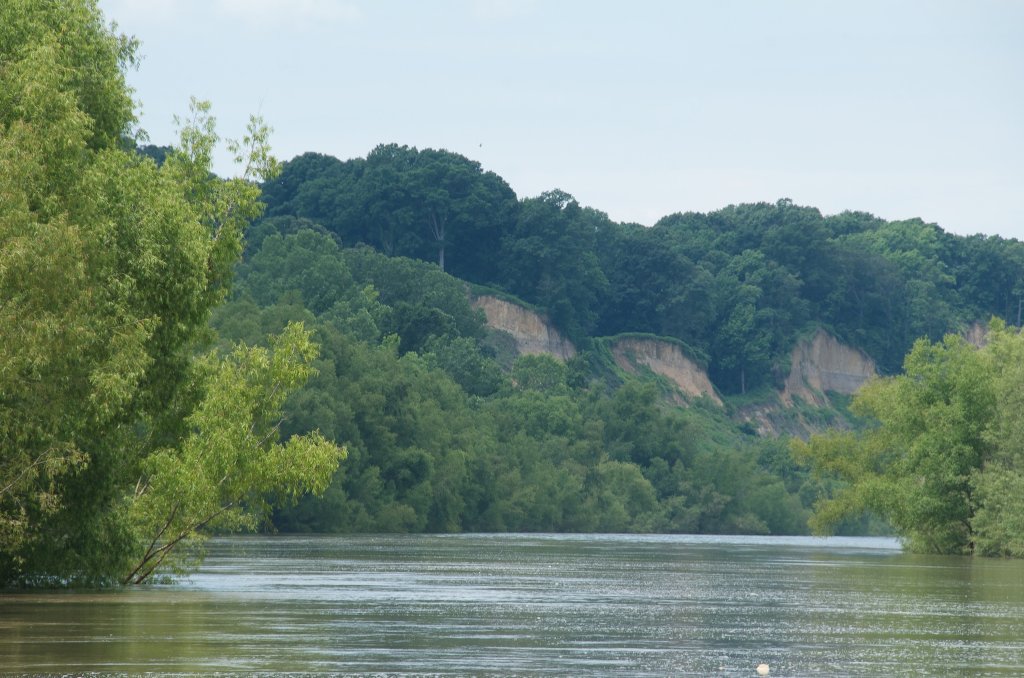 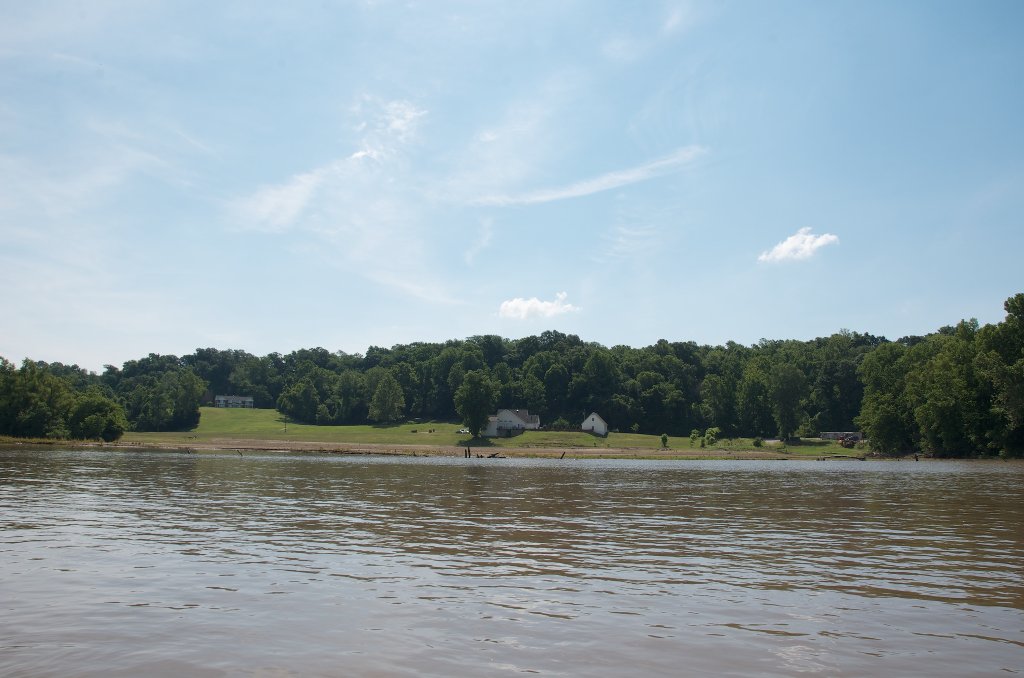