Below this island there is sometimes a scattering of scrubby willow islands, depending on river level.  If you are in the back channel it’s time to start thinking about returning to main channel for final approach into Memphis.  Keep with the flow as long as you can find any river left.  At some point you will see all of the flow pouring out back into main channel.  Unless you want to hug left bank slow water (and possible parked tows and industry near the mouth of the Looshatchie, go with the flow and head out into the faster water of main channel.  As always plan your route according to any visible towboat traffic.  Normally upstreamers in this area stay in the slower water LBD while downstreamers keep in the faster water RBD

As you come through Lower Hickman your imagination will be arrested by the sight of a shiny steel and glass Pyramid rising right off the face of the river like an Egyptian mirage flashback.  This is Memphis’ famous landmark, the Pyramid.  Downtown thickens the horizon.  This vision alone will reward you for any trails you have undertaken to get into the back channel and follow it this far.

The mouth of the Loosahatchie is a seldom visited place by canoeists or kayakers, partially because it is hidden between long dikes extending hundreds of yards from the Tennessee shore and the busy activities of Fuller Dock and Warehousing which keeps a small fleet of towboats there for sand, gravel, asphalt and concrete operations.  For the downstream paddler it makes little sense to come anywhere near.  And yet adventuresome paddlers wanting to do some local exploring by canoe, kayak or SUP would be rewarded up the Loosahatchie with plentiful wildlife and little traffic.

Warning: beware of very powerful eddy which forms around the point of the Loosahatchie River Dike at Low/Medium water levels.

When you reach the Loosahatchie River you will know you are sho-nuff arrived in the big city.  What a change of scenery: after all of the long miles of wild and woody wilderness above the city, you come around the last of the Hickman Islands and up to the Loosahatchie, and Wam-Bam!  Now there’s no mistaking urban civilization for all the bridges, skyscrapers, condos, oil tanks, docks, airplanes, jet planes — now visible or heard.  Or smelled.  If the wind is out of the south you’ll be getting your first whiffs of the Upper Wastewater Treatment Plant, as well as the burned-off fumes from the Valero and Conoco Refineries.

The humble Loosahatchie is one of the most overworked rivers in the history of the Mid-South, having suffered from channelization, dredging and other ravages along most of its length.  Flowing only 64 miles in a westerly direction from its birthplace in the flat tops of the Tennessee Hills, the cotton fields it once irrigated (and helped Memphis become the cotton broker for the world) were long ago replaced with suburbia and industry.  It is superseded in length and volume by its neighboring rivers the Hatchie and the Wolf.  The first eleven miles upstream of its confluence with the Mississippi are its most wild and forested, meandering through industrial bottoms, but well insulated from urban presence by a thick carpet of dense bottomland hardwood forest.  Desert cities like Phoenix and and plains cities like Denver need heavy-handed zoning to create green spaces.  In river cities like Memphis the river creates the green spaces.  Protect the river you protect the green space.

Everyone knows the Mississippi River runs from the North to the South.  And yet holding a compass along any of its many bends and turns and passages you wonder just where does it actually do this?  The compass has shown you west, southwest, southeast, east, even northeast and northwest, and amazingly due north (in a few places).  But here along downtown Memphis it makes a run true to its name: after passing the Loosahatchie River, the entire Mississippi River takes a rare five mile run due south past the mouth of the Wolf River, Mud Island and right under the three steel trusses of the Arkansas & Memphis Bridge, where it is finally forced westward by the muddy escarpment of the South Memphis Bluff. 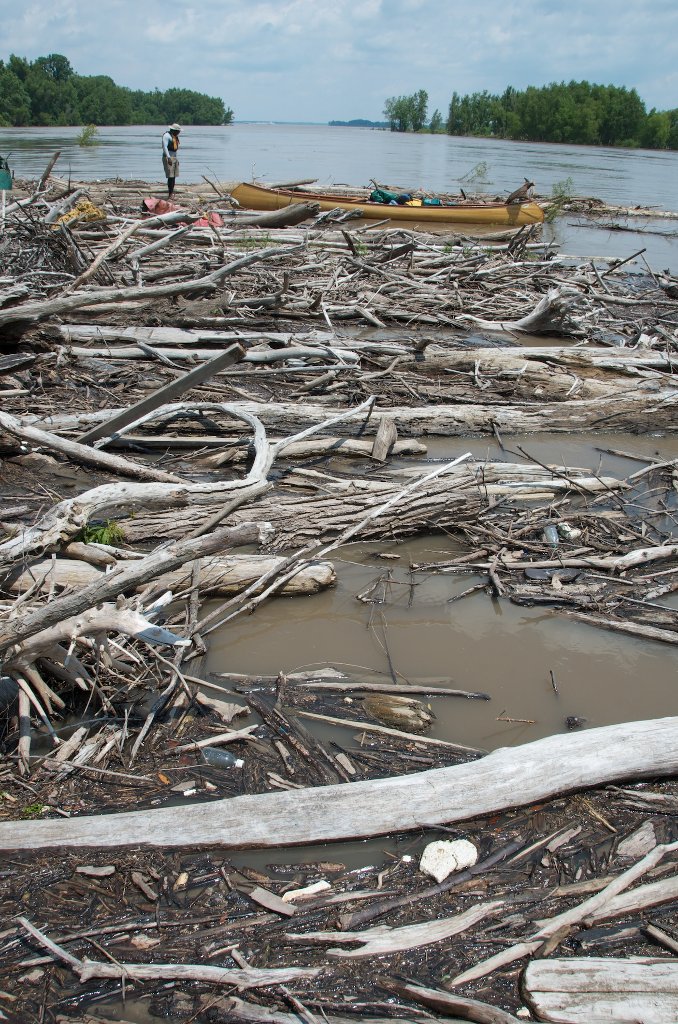 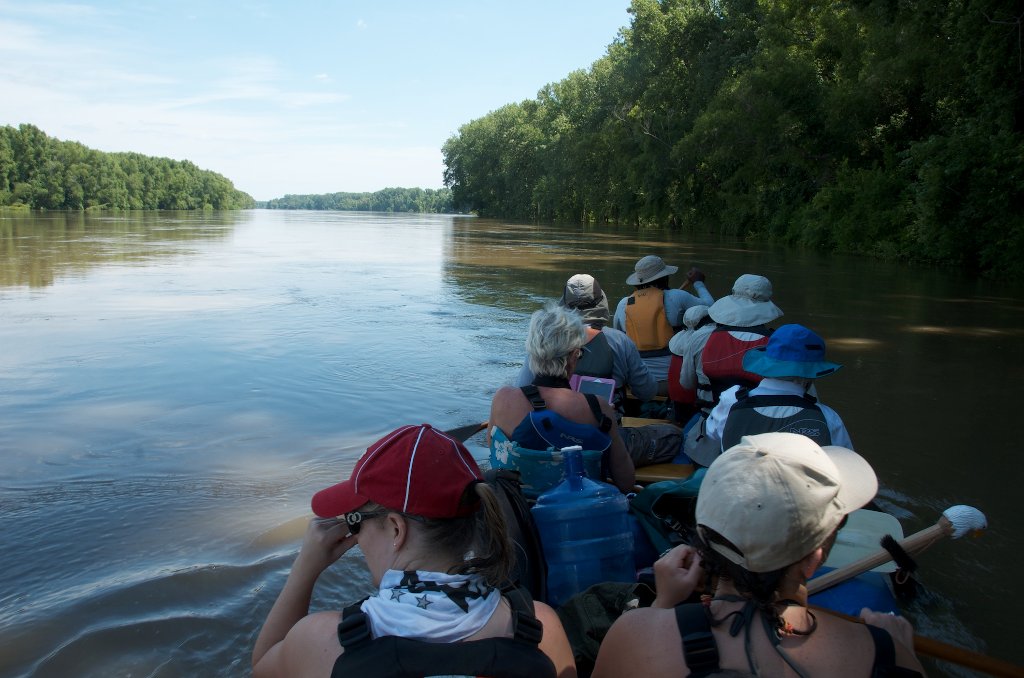 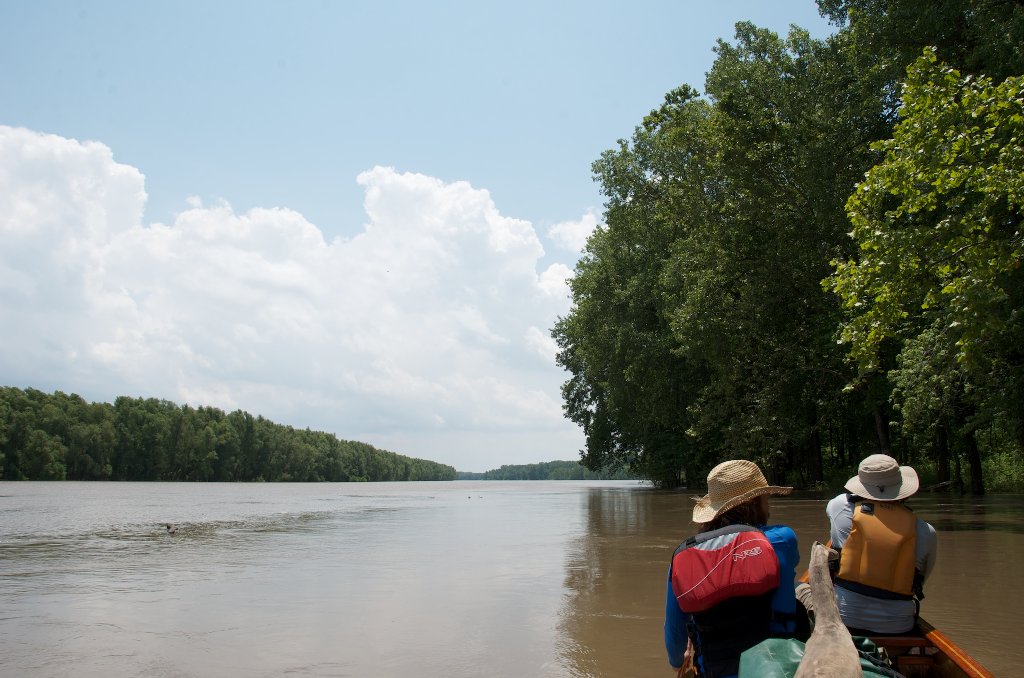