Every thousand years or so the Mississippi takes a new route to the Gulf of Mexico. In one of its last generations, this was the main channel of the Mississippi. Today Bayou Lafourche remains as a winding tree-lined waterway that used to be connected to the newest generation of the Mississippi River as a distributary. When the levees were built it became disconnected. A pumping station was built here to keep some water flow (up to 10,000 cfs) in the Bayou Lafourche so that it can still function in the communities it passes through, including Napoleonville and Thibodeaux, and not become silted in.

“The Fork,” or Bayou LaFourche, was a narrow outlet of the Mississippi that carried excess flows of the great river to the Gulf in flood times. In high water, the little waterway that meandered for 110 miles before it emptied into the Gulf of Mexico was navigable for steamboats but was a mixed blessing for early settlers in the area. While it was sometimes a useful transportation artery, it also allowed their plantations to be inundated all too frequently. John James Audubon was in the Bayou LaFourche country early in January, 1821. He complained that it “rained and blowed hard,” but said he did not let the weather prevent him from taking a long walk to the swamp that lay behind the plantations. He was astonished by the number of birds he saw, and was fascinated by some fields of unpicked cotton. “The white bolls made it look like as if a heavy snow had fell and froze on every pond,” Audubon wrote in his Journal. In 1903, local interests built a dam across the mouth of the Bayou LaFourche, to keep it from pouring flood waters down on their fields. It was agreed that the dam would be a temporary one, which was to be removed on or before December 13, 1907. An Act of Congress in 1935 belatedly recognized the fact that the dam was still there, and authorized the permanent closure of Bayou LaFourche. (Braggs)

Even though there is a Boat Ramp marked on the USACE 2007 Lower Mississippi River Maps at Donaldsonville, it was ruined by the sediment effect of the 2011 flood, and the short remaining peice of concrete ramp exposed does not reach the river at most water levels. At time of writing (fall 2015) there have been no public plans for rebuilding the ramp at this location. Paddlers can make landing here regardless. Lift your vessel out of the water over the muddied rip-rap. You could make camp on the grassy area below the levee. Easy access to the town of Donaldsonville over the levee behind.

Donaldsonville could be a good resupply and meeting place for paddlers on the Lower Miss. Make your landing wherever possible in the open area to the south of the Bayou Lafourche Water Intake at 175.4 RBD. If you hit it right (in low/med water levels) you will find a sliver of a sandbar. A little higher and its all rip-rap. But then in high water you can make soft landings on the green grassy fields below the levee. You could possibly camp in the fields here below the levee, but it is vehicle accessible. Hide any valuables or take them with you. Leave someone to guard your vessels, or hide them in any nearby clumps of trees. Over the levee brings you to Crescent Park on Mississippi Street. Cut south one block to get to Railroad Avenue, Donaldsonville’s central artery for commerce. The public library and post office are nearby. You’ll find several choices for groceries, drug stores, hardware, as well as cafes and clubs, B&Bs and restaurants. The Cypress Cafe, Hambonz Piano Bar and Grapevine Cafe and Gallery are all on the same 200 block of Railroad Avenue. Behind City Hall at 406 Charles St is the River Road African American Museum.

Donaldsonville was already an old community when the United States declared itself to be an independent nation. A trading post had been established there around 1750, and the parish church had been built in 1772. In 1806, William Donaldson acquired a large tract of land in the area, and laid out a town on the river bank that was first called “La Ville de Donaldson.” Donaldson was a native of Great Britain, but he spoke French fluently and was much admired by his French neighbors. An informant writing to President Thomas Jefferson in 1806 said of him: “The people here consider Donaldson a perfect, honest man.” The village at Bayou LaFourche soon became known as Donaldsonville, When it was decided in 1829 that the capitol of the State of Louisiana ought to be located somewhere other than in the city of New Orleans, Donaldsonville offered the legislature a fine brick building that had been built in 1825. The offer was accepted, and the legislature met at Donaldsonville in January, 1830, for a full three-month term. In 1831, the legislators returned to Donaldsonville, but stayed only four days before adjourning and moving back to New Orleans. The State House at Donaldsonville became a school building, and was later demolished. (Braggs)

CF Industries sprawling 1,400 acre Nitrogen Complex is touted as the largest nitrogen operation in North America. The facility produces anhydrous ammonia, granular urea and urea ammonium nitrate solution for agricultural and industrial use. In 2000 the facility had an explosion that killed 3 and injured 14. In June 2013 an explosion killed 1 and injured 7. In December 2015 a contract worker was found dead in a vessel that was under construction (investigation ongoing).

According to Toxic Releases (TRI) for 2013 CF Industries released a whopping 6,924,957 pounds of toxins into the air and 1,127,771 pounds into the river, which is the highest reported releases for any industry along the Lower Miss. This is not the most horrible stuff, but ammonia can irritate the nose and lungs and cause asthma-like effects. The nitrates in the water contribute to hypoxia in the gulf (dead zone). (Paul Orr)

A cabin is tucked into the woods with a private stone boat ramp composed of rocks and laid out at an upstream angle into directly into the rip-rap. You can eddy out into a small inlet directly below this cabin, and find beautiful sandbars and sand in the woods nearby. But to what line this cabin property extends, or how the owner feels about nearby campers, is unknown (at time of writing). Exercise due respect and caution.

Bringier Point/Houmas Point Greenspace is the narrowest and shortest greenspace yet, nothing but a thin single pencil line when viewed from above. But that thin green line is all it takes to create a healthy stretch of river around these two points. For the deer and other land mammals it means one more place to take refuge, to lay during the heat of the day and forage in coolness of night. For the amphibians it is a place to lay eggs and carry on other life cycles. For the fish, it is a place of schooling and a little peace and quiet. For the birds an important resting place in their migrations, and nesting place for the few who stay. For us paddlers this means relief from industry and several sandbars to choose from for relatively quiet camping. Try to walk softly and leave as little a footprint as possible so that it may be enjoyed by future generations. 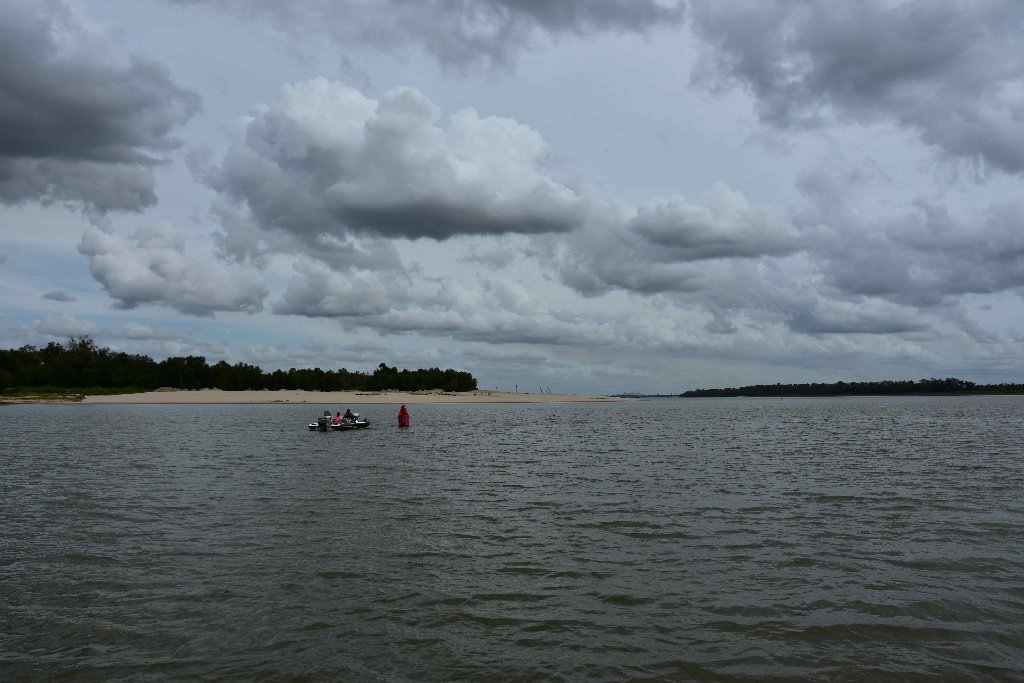 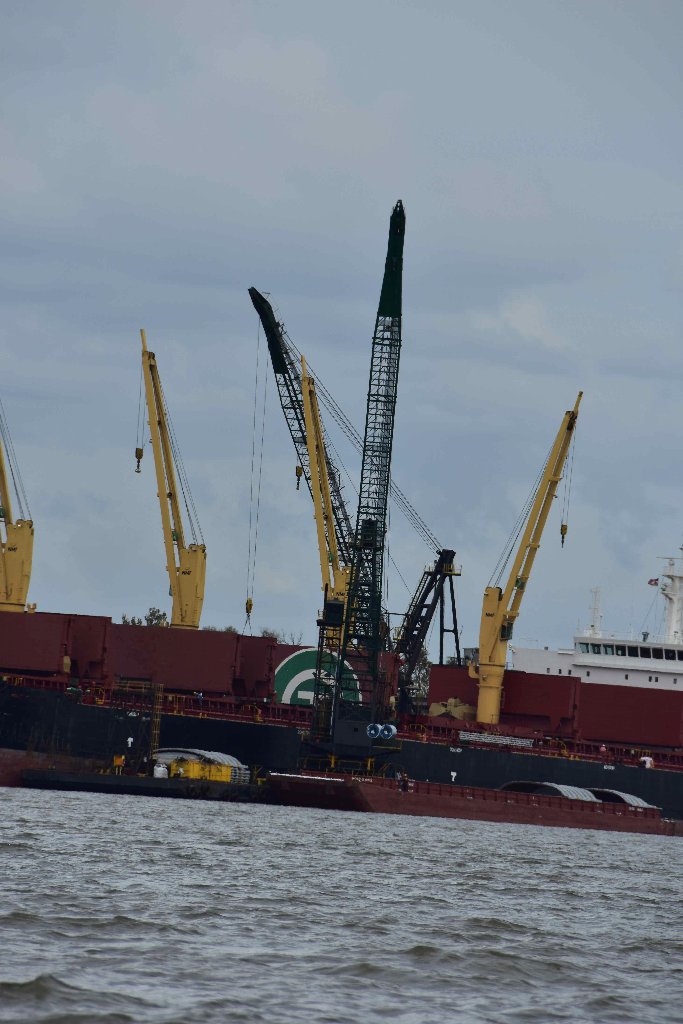 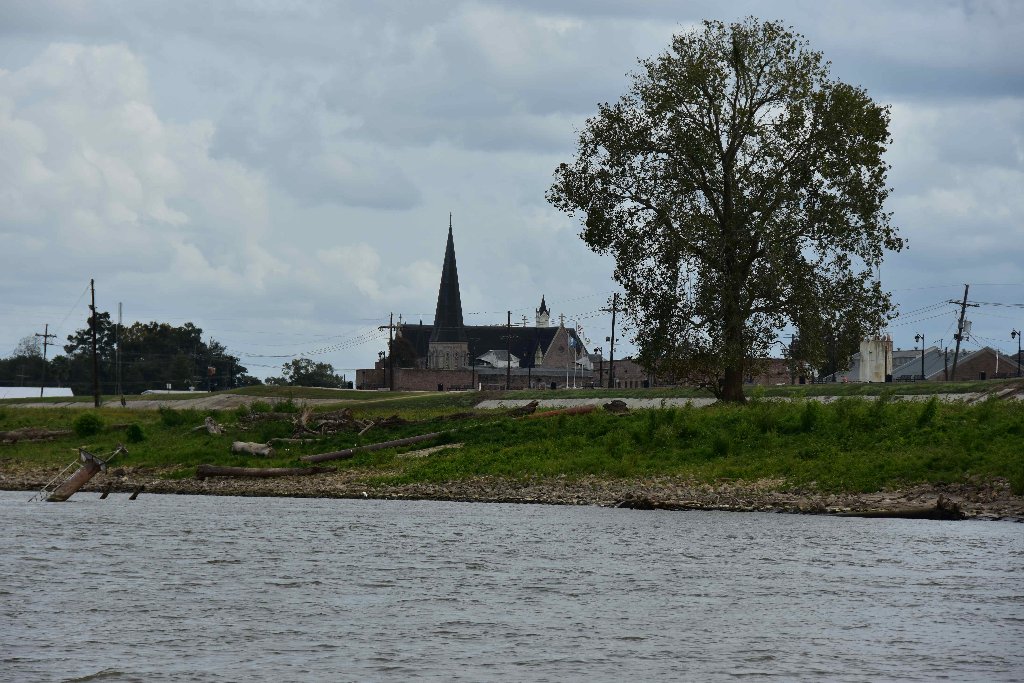 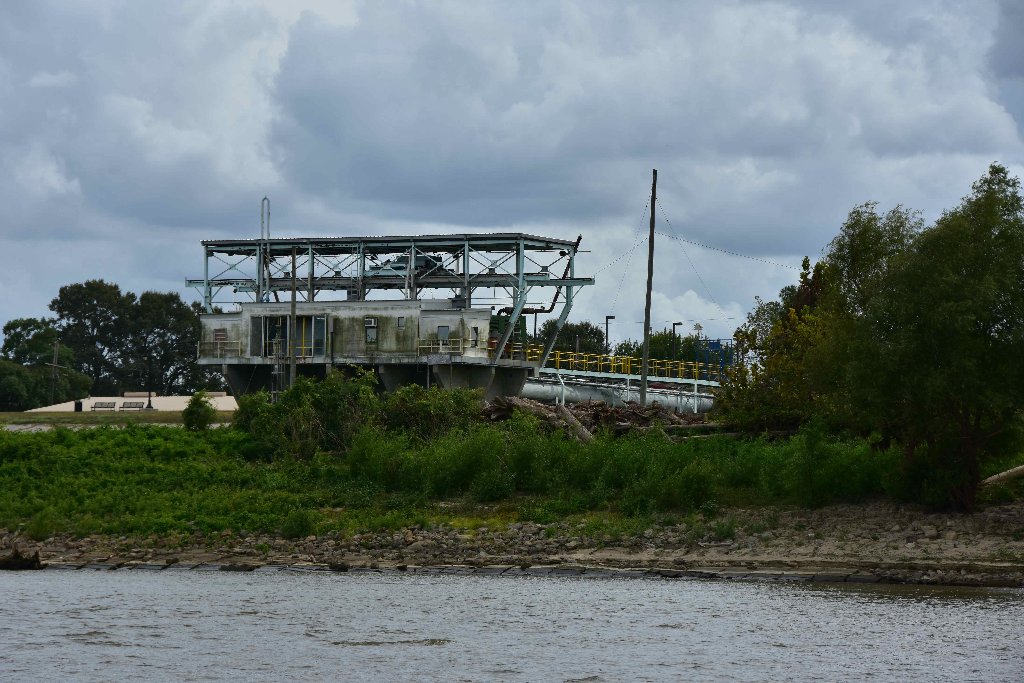 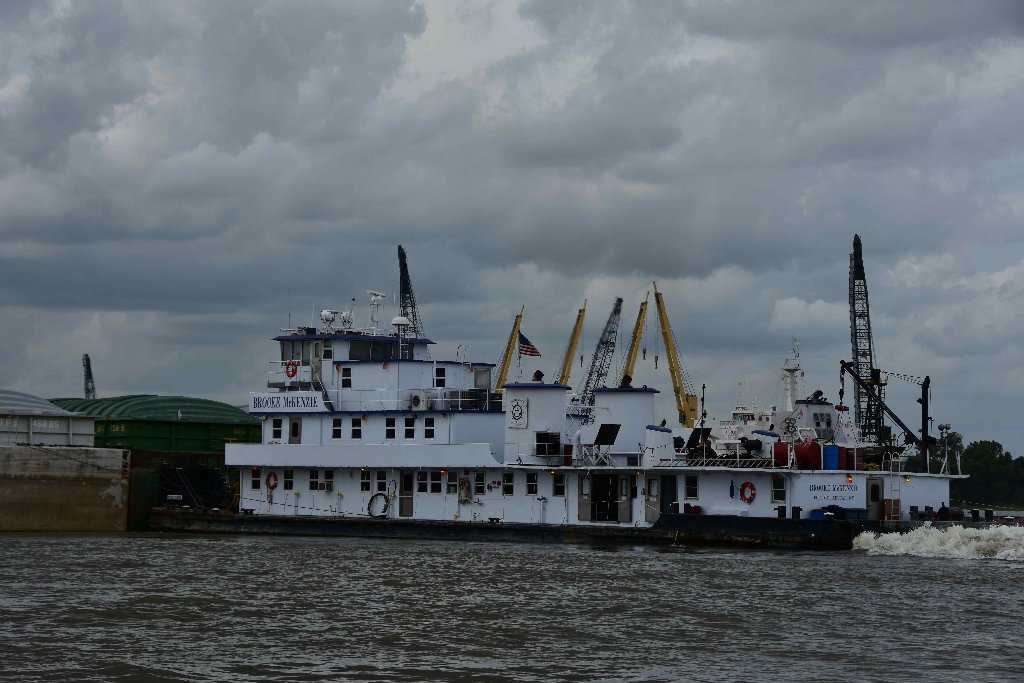 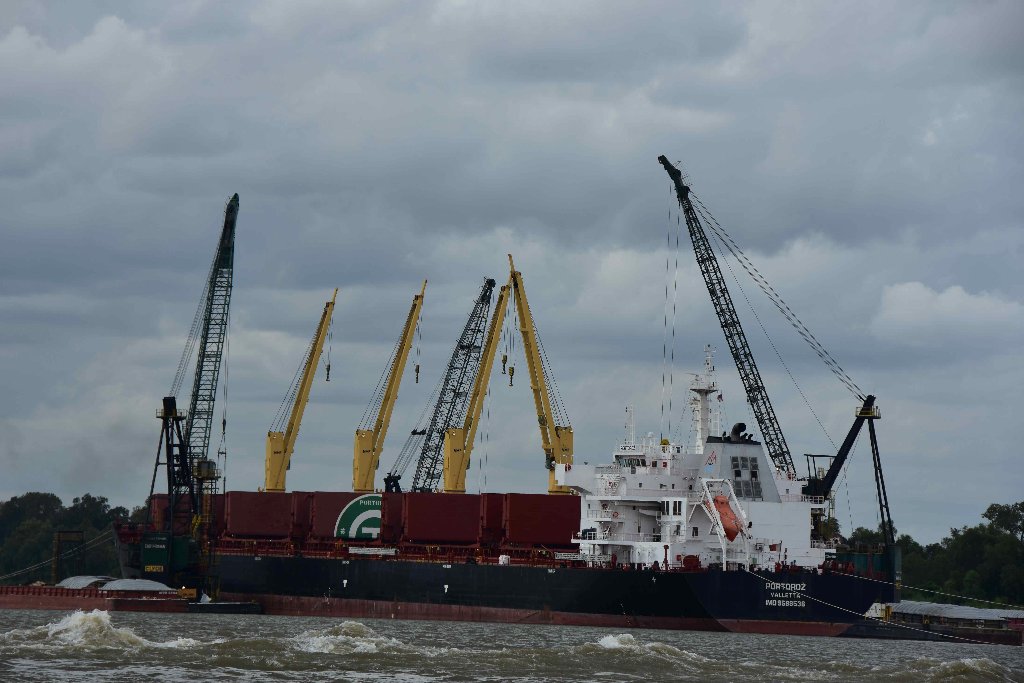 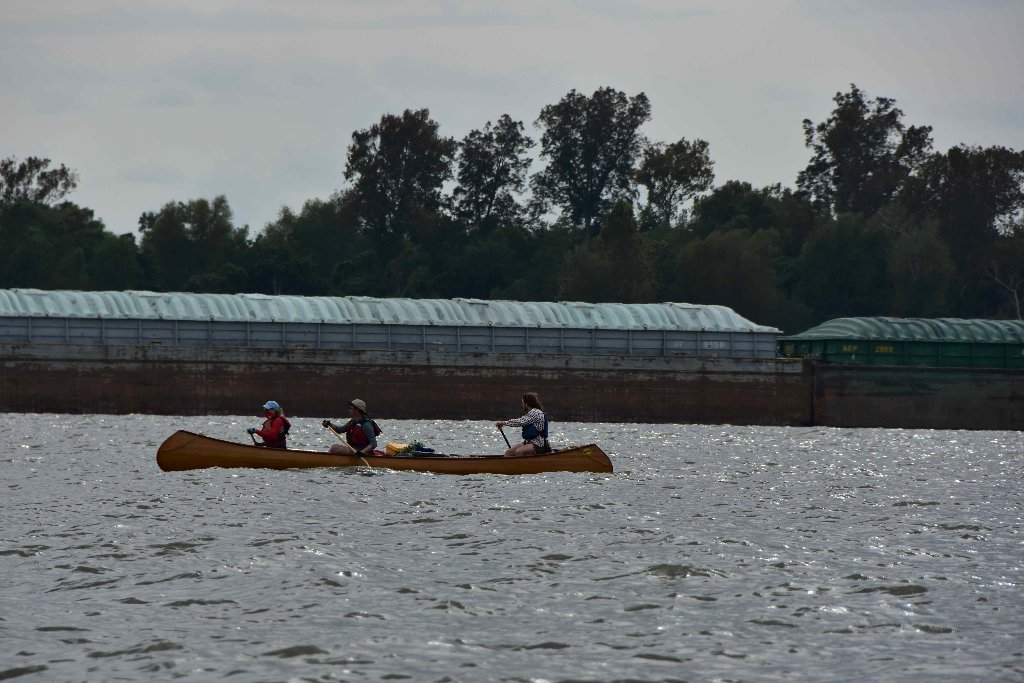 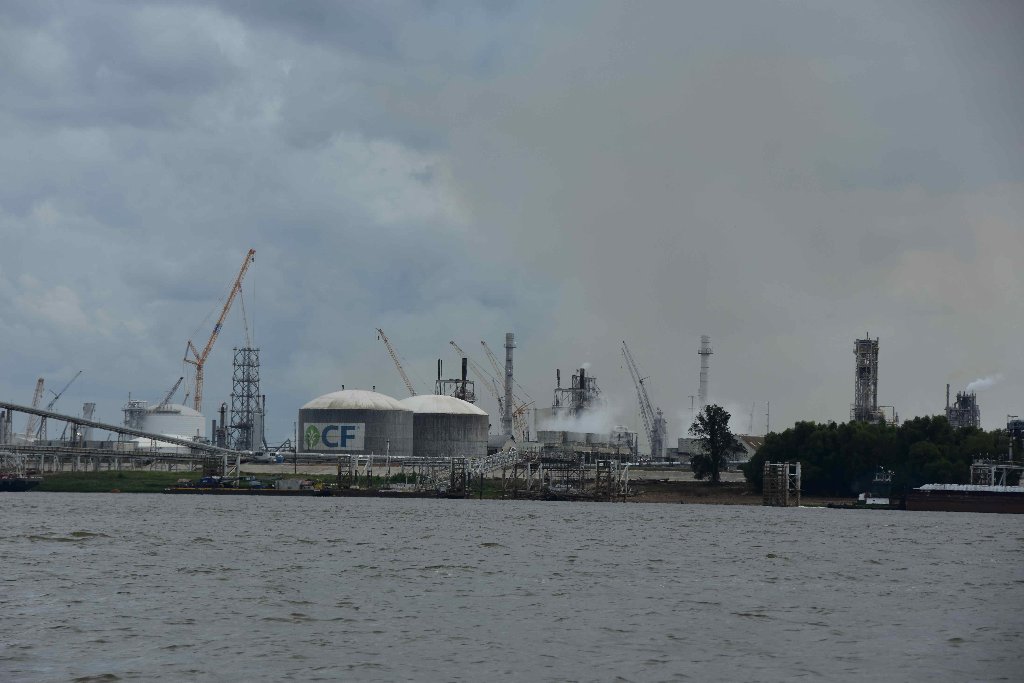 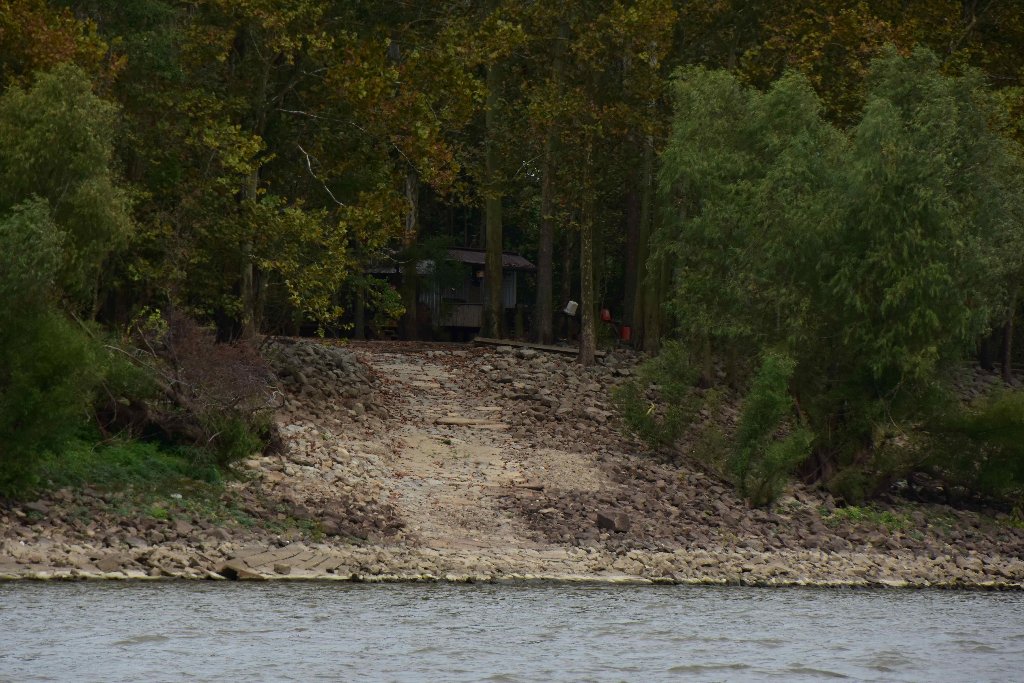 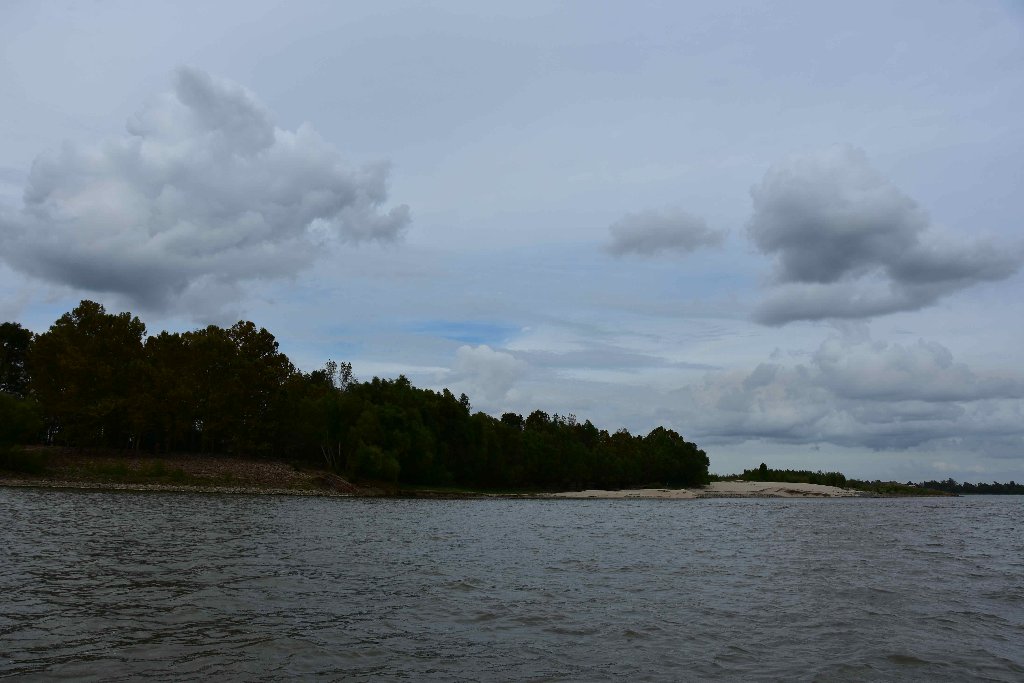