Motiva Convent Refinery is a 50/50 joint venture between affiliates of Shell Oil Company and Saudi Aramco. The refinery is designed to process approximately 225,000 barrels per day of crude oil. The refinery produces conventional petroleum products and refinery grade sulfur. The refinery is located on a 4,400-acre tract of land that straddles Ascension and St. James Parishes in Louisiana. The processing equipment is located in St. James Parish and occupies approximately 900 acres. The refinery uses two docks along 6000 feet of Mississippi River access. The facility is bounded by Louisiana Highways 44 and 70. The Convent Refinery began operations as a Texaco refinery in 1967. In the mid-1980’s the refinery capacity was approximately doubled to its current capacity. On July 1, 1998, a joint venture was formed between Texaco, Saudi Refining and Shell Oil Company under the name Motiva Enterprises LLC. In 2001, Texaco was purchased by Chevron and its interest in Motiva was sold to Shell Oil and Saudi Refining, Inc. on February 13, 2002. The Motiva Convent Refinery Toxic Releases (TRI) for 2013 were 115,956 pounds into the air and 235,295 into the river. (Paul Orr)

La State Highway 70 crosses the Sunshine Bridge connecting East Bank and West Bank. The Sunshine Bridge is named after the Louisiana Governor Jimmie Davis who penned the immortal song, “You Are My Sunshine,” and is a Continuous Steel Truss Through Deck with a length of 8,236 Feet. If there is a lot of traffic on the river, you should aim for one of the narrow spans West Bank or East Bank, and avoid the central span (750 feet wide), or the west span (725 feet wide) through which most commercial traffic passes. The Sunshine Bridge has 4 lanes for motor vehicle traffic and has an average vertical clearance of 170 feet above the river. Meanwhile passing under the river within this same area are major pipelines by Williams Gas, ExxonMobil, United Gas, Texaco, Shell, Monterey, and Louisiana Power & Light Co.

Land Access: A gravel road drops down the levee on the West Bank under the Sunshine Bridge, providing limited access to a primitive landing highlighted by a sunken barge and lots of trash. This is a popular fishing spot, and could be a primitive access point for paddlers needing to make connection to land.

The Sunshine Bridge was long known as the “Bridge to Nowhere” because the south end of the bridge emptied into a swamp. For a while the Sunshine Bridge entered satirical usage for other bridge projects that ended up in dead end spots, such as the Gravina Island Bridge in Alaska. The bridge had been built under the administration of Governor Davis, who had twice picked and sung his way into the Governor’s Mansion, and then rode his horse also named “Sunshine” into the Governor’s office at his second inaugural! (Wikipedia)

When first opened, the bridge served mostly local farm traffic and sugar cane trucks. It was planned that the bridge would be part of a larger highway project called the Acadian Throughway, and later, the South Central Louisiana Tollway. Those projects never materialized, but the Sunshine Bridge has been connected to the regional traffic grid as roads in the area have been developed and improved. Since the bridge opened, the economy in this area has grown by leaps and bounds, largely due to the improved transportation. Prior to 1964, there were several ferry boat operations carrying traffic across the Mississippi River between Baton Rouge and New Orleans. The Sunshine Bridge replaced the ferry at Donaldsonville, and was the first bridge over the river between the two Huey P. Long Bridges (US-190 at Baton Rouge and US-90 at New Orleans). The Sunshine Bridge operated as a toll bridge until 2001 when the 50 cent toll for westbound traffic was eliminated. It was proposed that this bridge be named after Louisiana Governor James Davis. Davis, however, requested that the bridge be named the Sunshine Bridge rather than carry his name. In addition to being elected Governor in 1944 and 1960, Davis was also a successful songwriter and singer. The bridge name was taken from his hit song ‘You Are My Sunshine’. Davis was subsequently inducted into the Country Music Hall Of Fame. (John Weeks)

Watch for two-mile long anchoring area for freighters on East side of main navigation channel. You can paddle through the center of this anchorage if there is no movement of freighters. But if you see tugboats at work, or freighters in motion, stay clear.

Bonfires on the Levee

Paddlers descending Chemical Corridor in at the end of the year (December) will be rewarded with big bonfires burning on Christmas Eve on top of the levee. It is a custom of local cajuns to celebrate Christmas Eve by lighting huge bonfires on the levee. Wood is gathered for weeks in advance, and stacked around a tall center pole. When the fire is lit, tall reeds called “roseaux” were traditionally tossed into the blaze. They exploded with firecracker noises that gave added excitement to the occasion. Today some cajuns use firewroks instead of the cane, which is now harder to find. These bonfires are intended to light the way for “Papa Noël,” the Cajun Santa Claus, on his airborne journey to the area. Or, according to some sources, the bonfires may have also been a way of lighting the path to the nearest Catholic church for Midnight Mass. The earliest bonfires on the levees were relatively simple in design and assembly, with long logs arranged into a pyramid-shaped cone, some as high as twenty feet. Shorter horizontal logs holding the structure in place gave it a ladder-like appearance. Most of today’s bonfires still incorporate that design, but more imaginative creations have since evolved. Some of the most elaborate structures resemble old Cajun cabins, pickup trucks and other indigenous cultural motifs. At dusk, usually around 7:00 p.m., the structures are doused with flammable liquids and set ablaze, lighting the sky and the surrounding area with towering flames that would be impossible for Papa Noël and his reindeer to miss. The crowds that gather to watch these spectacular conflagrations enjoy a free show and, in some locales, free bowls of hot gumbo are served up by local residents. The blazes are often accompanied by displays of fireworks, set off by the fires themselves. These Christmas Eve bonfires are most commonly found in St. James Parish, where you are now paddling. As many as 100 or more bonfires may be erected in the adjoining communities of Gramercy, Lutcher and Paulina, and more may be scattered in other locations in St. James and neighboring parishes.

The Mosaic Company’s Faustina plant sits on a 2,850-acre site and was owned by Gulf Oil Corp. between 1967 and 1972, the Williams Co. between 1972 and 1986, Freeport-McMoran Corp. from 1986 to 1983, IMC Global from 1993 to 2004, and was bought by Mosaic on Oct. 22, 2004. The Mosaic Company’s Faustina plant produces ammonia and receives phosphoric acid from Mosaic’s Uncle Sam plant to make diammonium phosphate (DAP), monoammonium phosphate (MAP), and Mosaic MicroEssentials® products. Diammonium phosphate (DAP) is a dark grey granular material; if you see a dark grey granular material in barges being loaded onto ships around here, it’s probably DAP. In 2006 an explosion at Mosaic Faustina rattled houses several blocks away but no one was injured. The facility has more than 1,400 acres of waste pits and ponds behind it. The American Styrenics plant is on the downriver side of Mosaic. They produce styrene monomer from benzene and ethylene for the production of polystyrene, styrene-butadiene copolymers, and other plastics. Toxic Releases (TRI) for 2013 in pounds: Mosaic Faustina: Air: 1,649,888; Water: 32,543 and American Styrenics: Air: 120,550; Water: 1,946. (Paul Orr) 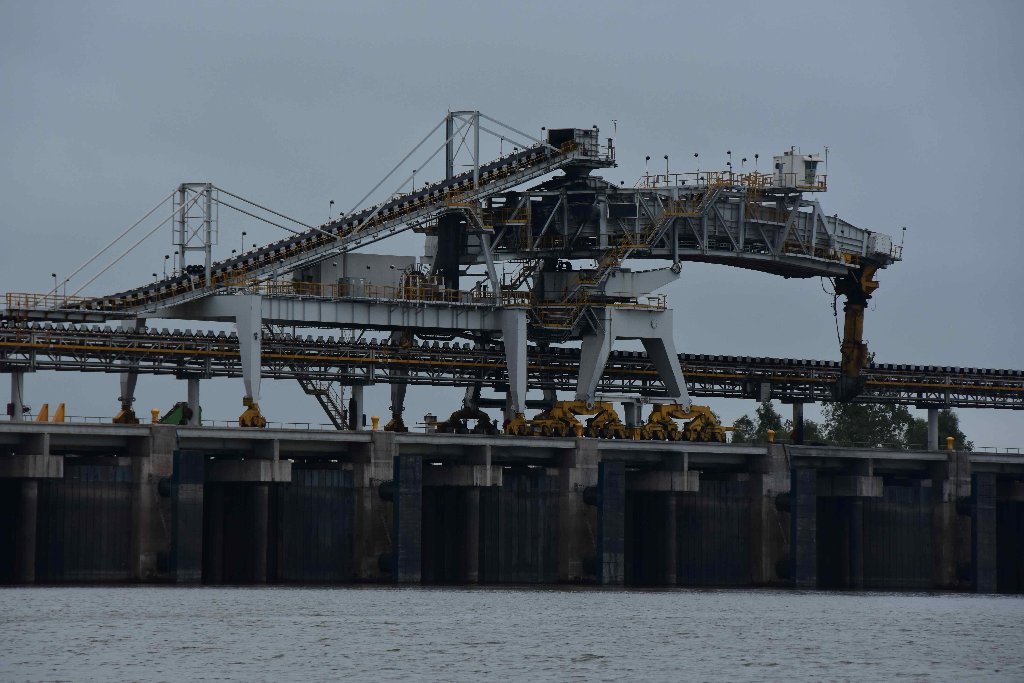 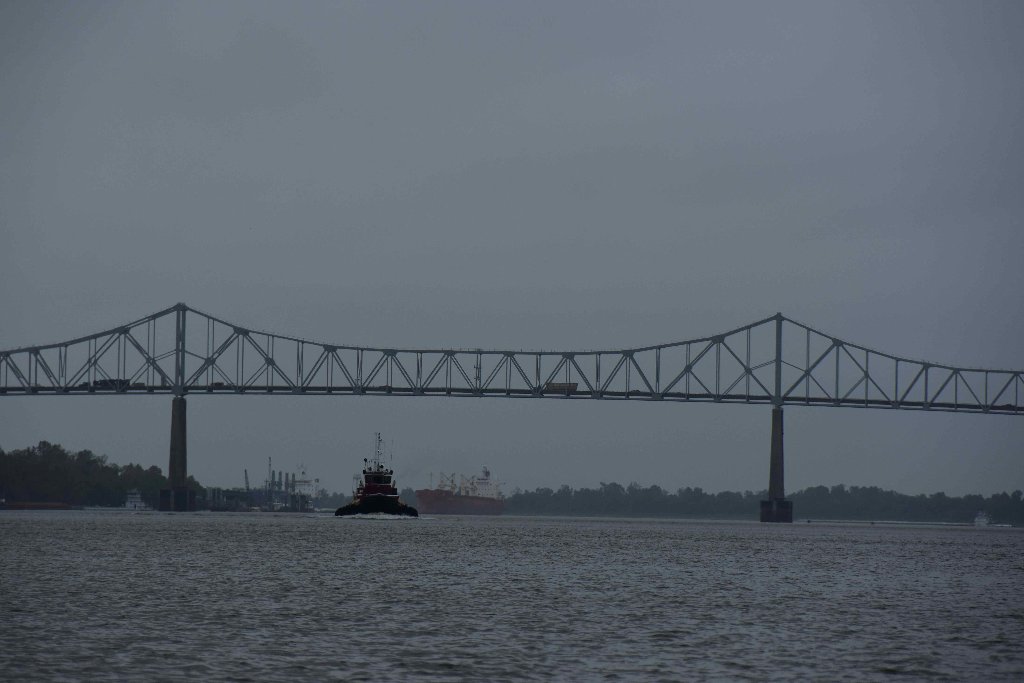 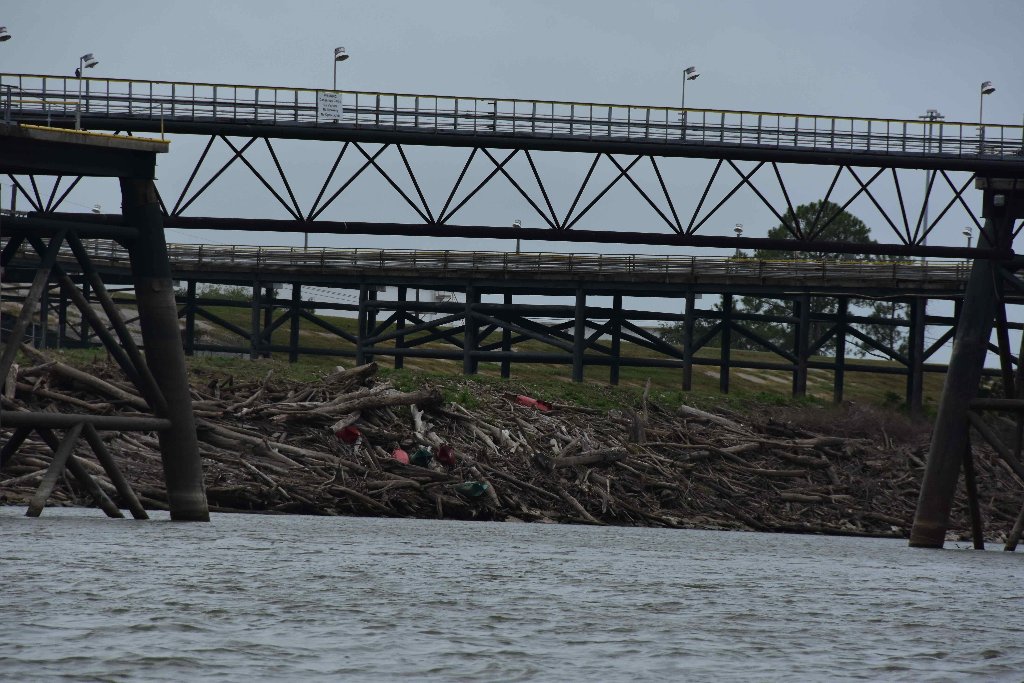 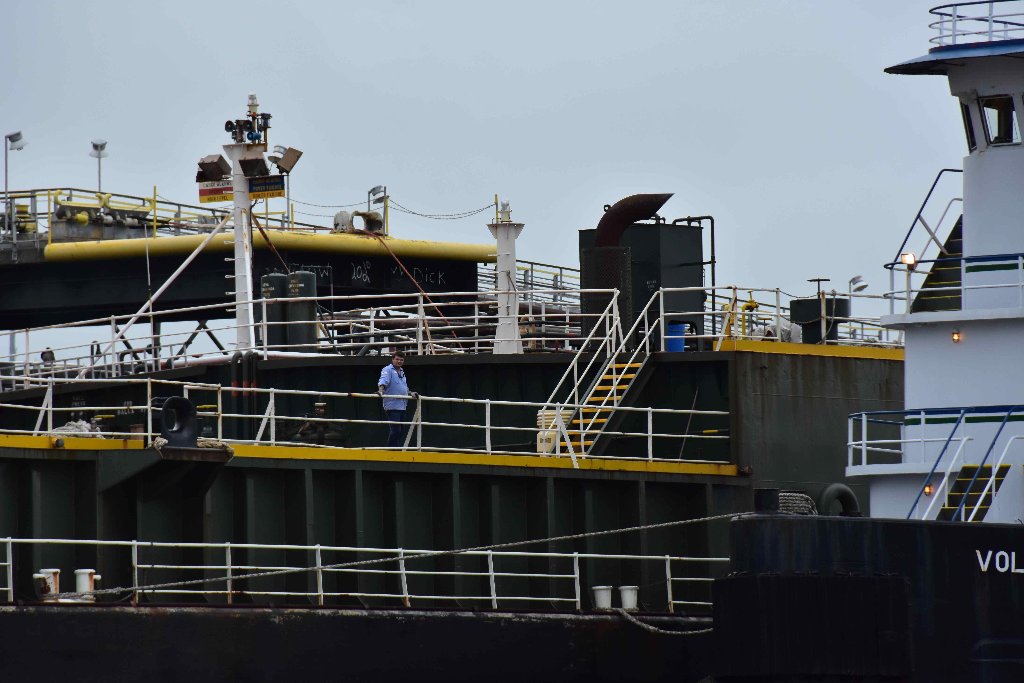 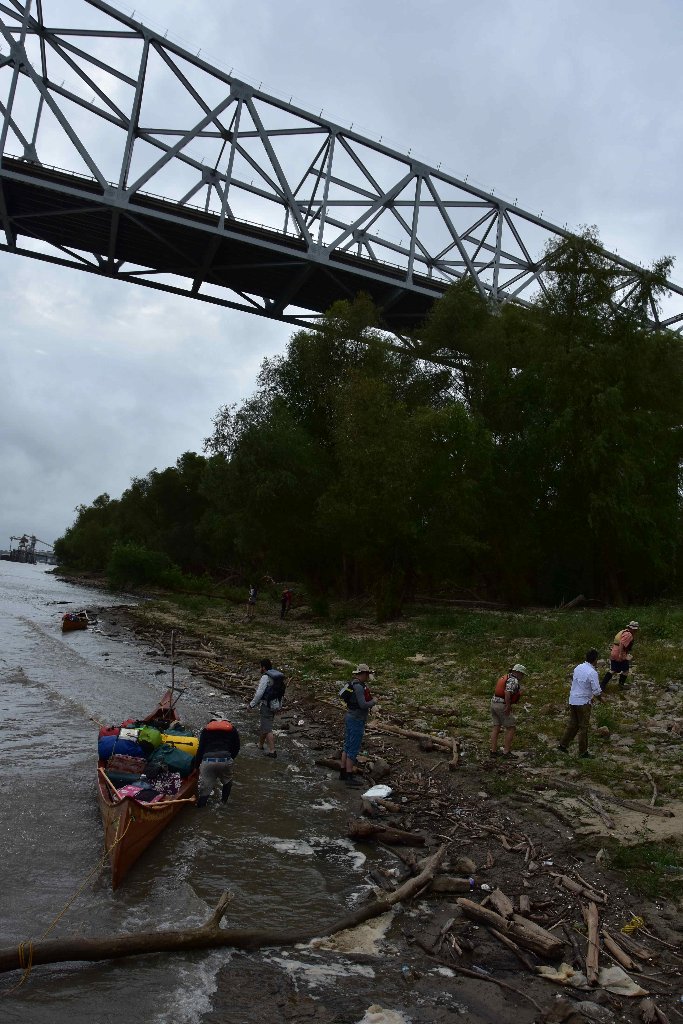 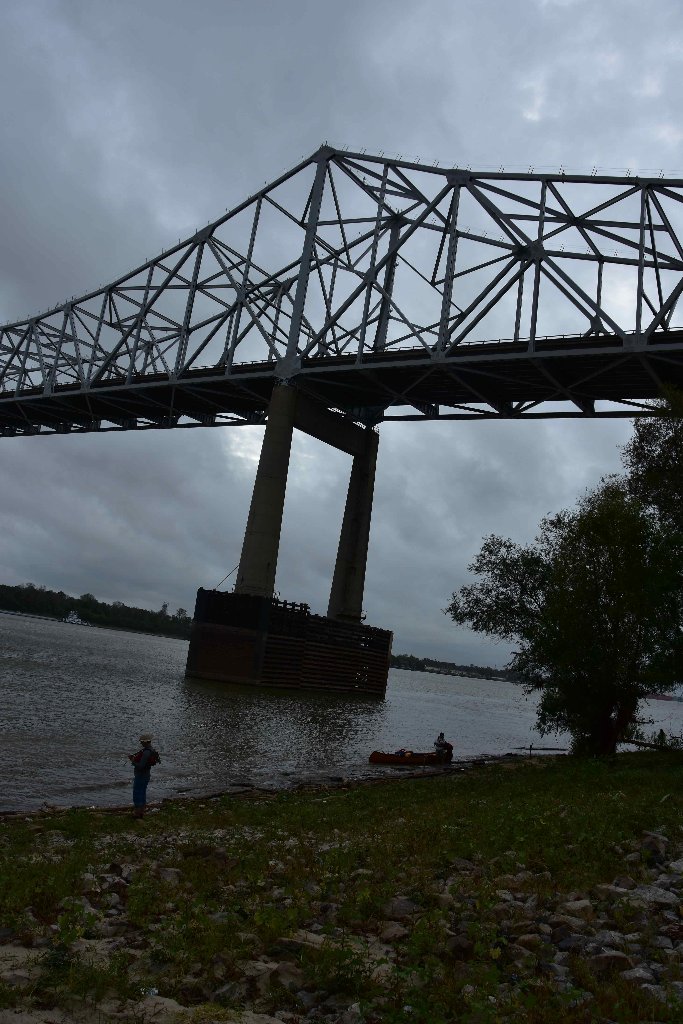 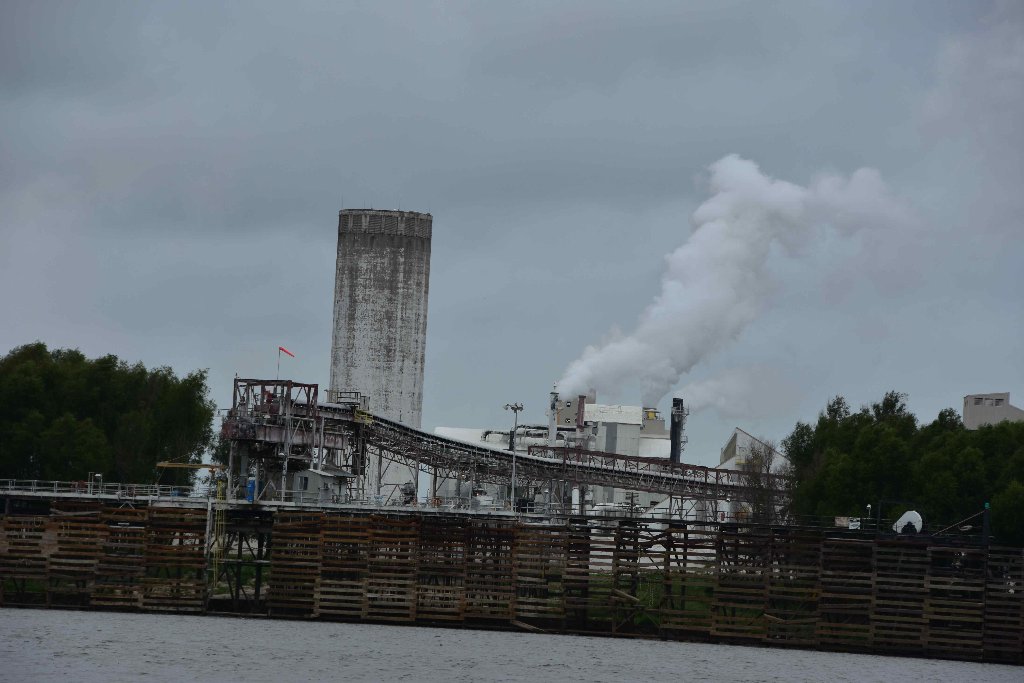