There are two graveyards located in the spillway. The cemeteries containing the remains of both free and enslaved African-Americans are under several feet of sediment. When the Spillway gates are opened, the cemeteries are flooded with up to 30 feet of water diverted from the Mississippi River into Lake Pontchartrain. According to investigative reporter Shonna Riggs, “The location of the gravesites was a mystery until the 1970’s when the US Corp of Engineers was attempting to excavate a ditch in the spillway. During that process, a tombstone and casket were discovered. In 1986, the corps ordered a historical study of the spillway and discovered a second cemetery. The two cemeteries were placed on the National Register of Historic Places on 10/16/1987.” According to the Louisiana Historical Preservation Society, there are 14 graves located in the Kugler Cemetery and 144 in the Kenner Cemetery. The artifacts discovered during the 1986 study included coffin furniture, coffins, grave markers, cultural remains, and human remains. The archeological district consists of two discontinuous, but historically associated, historic cemeteries. The cemeteries, named Kenner and Kugler, are black burial plots which appear to date from the early 1800s to 1929. The sites are located on former adjoining 19th- and early 20th-century sugar cane plantations in St. Charles Parish. According to oral histories, both cemeteries were dedicated burial plots on the back side of their respective plantations. The Kenner Cemetery, located on the former Roseland Plantation, was reported to be marked by iron and wooden crosses during its period of use. No such markers were confirmed archaeologically, but one granite headstone was recovered from the site. The Kugler Cemetery, located on the former Hermitage Plantation, was reported to contain iron crosses and a metal fence. One such iron cross and remnants of what could have been the fence were recovered during the 1986 archaeological investigations. At present the sites are indistinguishable from the surrounding landscape. (Wikipedia)

Air Products, Air Liquide, and Praxair are companies that operate facilities that supply industrial air products to larger industrial facilities. Most of the larger industrial complexes will have at least one of these facilities which supply liquid nitrogen, oxygen, CO2, and various other gasses to the larger facilities that use them in their production processes. Air Liquide acquired an air separation plant from Dow Chemical in December 2003 and is the exclusive supplier of oxygen to Dow’s 270,000 tonne/year n-butanol (NBA) plant in Taft and its operations in Seadrift, Texas.

Galata Chemicals is one of the world’s leading producers and marketers of additives for the Polyvinyl Chloride (PVC) and associated industries; including plasticizers, lubricants, and foaming agents. The facility primarily manufactures polymer additives, which maintain the durability and longevity of PVC pipe, fencing, and plastic products.

Koch Nitrogen anhydrous ammonia import/export terminal. In 1995 a leak caused ammonia to spread over the St. Charles Parish area causing health effects in many residents and resulting in a lawsuit with 8,000 individuals who believed that they were harmed.

Union Carbide Corporation began operating a petrochemical plant near Taft, La. in 1966. Dow Chemical Company acquired Union Carbide Corporation in 1999 and the facility now operates under the Dow logo. The facility currently consists of a 2,000-acre petrochemical manufacturing complex with it’s own electrical and steam generation and has the capacity to produce over 10,000,000,000 pounds of product. The facility makes glycol ethers, polyolefin’s, elastomers, polyethylene, and various other specialty chemicals. Accounts of numerous accidents and spills can be found, some highlights follow: In December 1982 a tank containing acrolein exploded shattering windows for over a mile and resulting in the evacuation of 17,000 people. In March of 1990 a power outage caused a release of 36,722 pounds of propylene, 10,000 pounds of acetylene, and 497 pounds of ethylene oxide. In April 1990 4,500 pounds of naphtha was spilled. In June of 1990 2,268 pounds of anhydrous ammonia was spilled. In March of 1991 4,400 pounds of tetrahydrofuran spilled into Mississippi River. In October of 1991 1,360 pounds of ethylene glycol spilled into Mississippi River. In January of 1993 1,100 pounds of ammonium hydroxide spilled into the Mississippi River. In July of 1993 8,300 pounds of ethylene released. On July 7, 2009 ethyl acrylate was released from a ruptured tank that required evacuations and shelter in place orders, some local residents believe they were negatively affected by the exposure and were critical of the handling of the situation by parish emergency officials. Dow St Charles Operations Toxic Releases for 2013 were 396,482 pounds into the air and 104,859 pounds into the river. (Paul Orr)

Taft began as a sugarcane plantation and slowly grew to include a post office, store, and the Holy Rosary Catholic Church (established in 1877). In 1966, Union Carbide (now Dow Chemical Corporation) bought the Holy Rosary property and moved the church to Hahnville. The Holy Rosary cemetery and Green Hill cemetery (completely encapsulated by the plant) remain the sole relics of the community. (Paul Orr)

Another long line of barge fleeting is found West Bank, with no opportunity for stopping. Winds get concentrated by the non-stop bankside infrastructure, as well as the waves. Be especially careful about paddling through here in strong Southerly or Easterly winds.

A shallow gully washes in here amongst the noise and hub-bub of neighboring industrial giants. Neither landings nor any bank side activity recommended, but in case of emergency you could pull up the sandy drainage here and get your breath. If you can keep going, a beautiful safe sandbar is found (in low/med water) five miles downstream 123 RBD at Dufresne.

These two communities are sandwiched between a Shell chemical plant on the east and a sprawling facility including another Shell Chemical plant and two oil refineries on the west. After a series of frightening explosions and accidents at the Shell Chemical facility, the residents began to organize. Multiple lawsuits awarded the residents compensation for damage caused by the explosions, yet they were unable to sell their homes. In 2002 the community finally was able to negotiate a buyout program with Shell, which agreed to relocate all residents who wanted to live elsewhere. (Paul Orr) 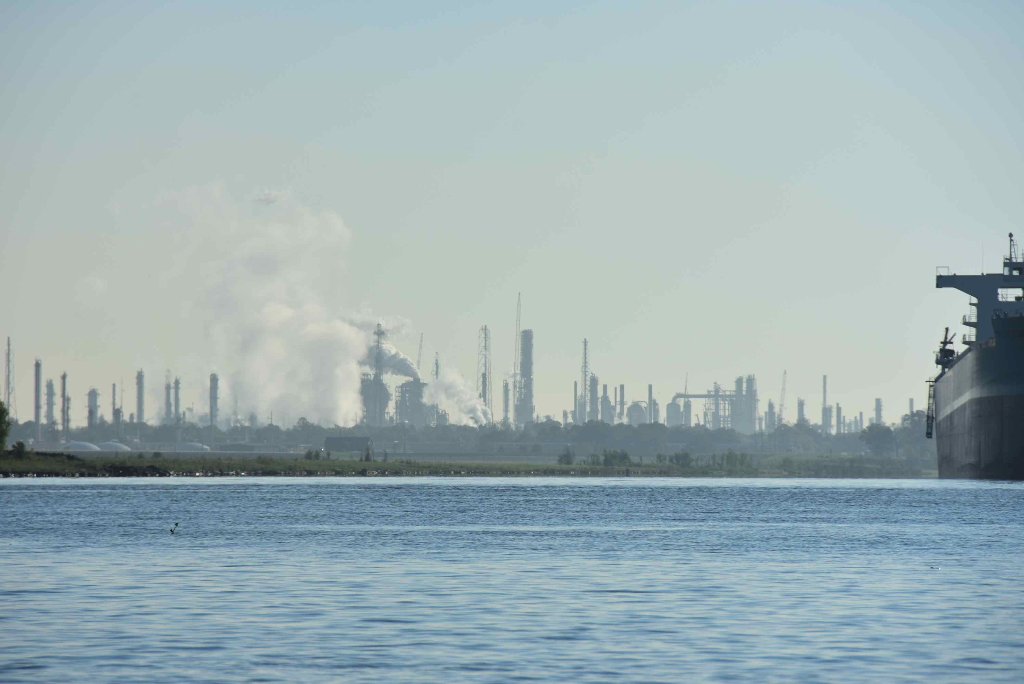 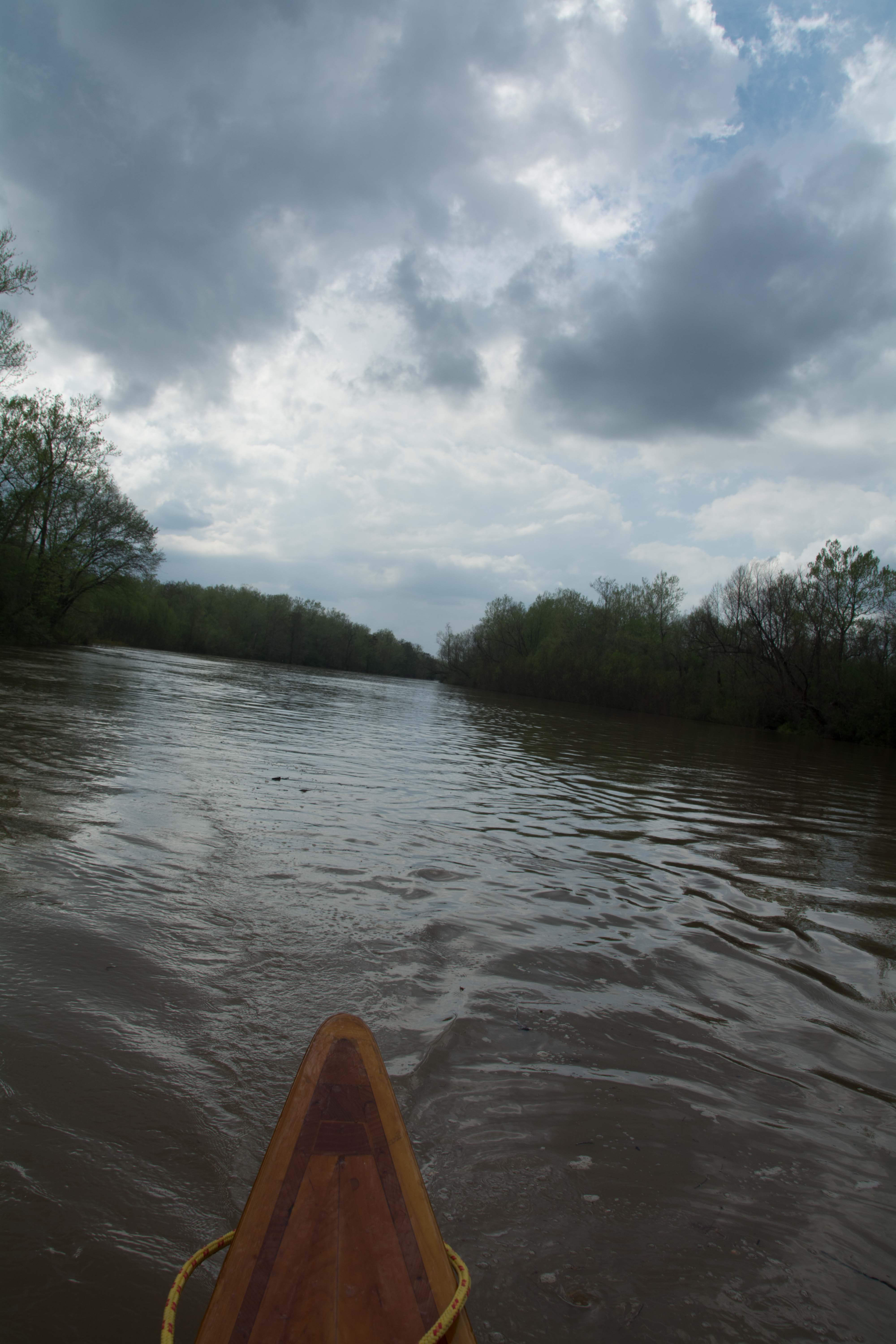 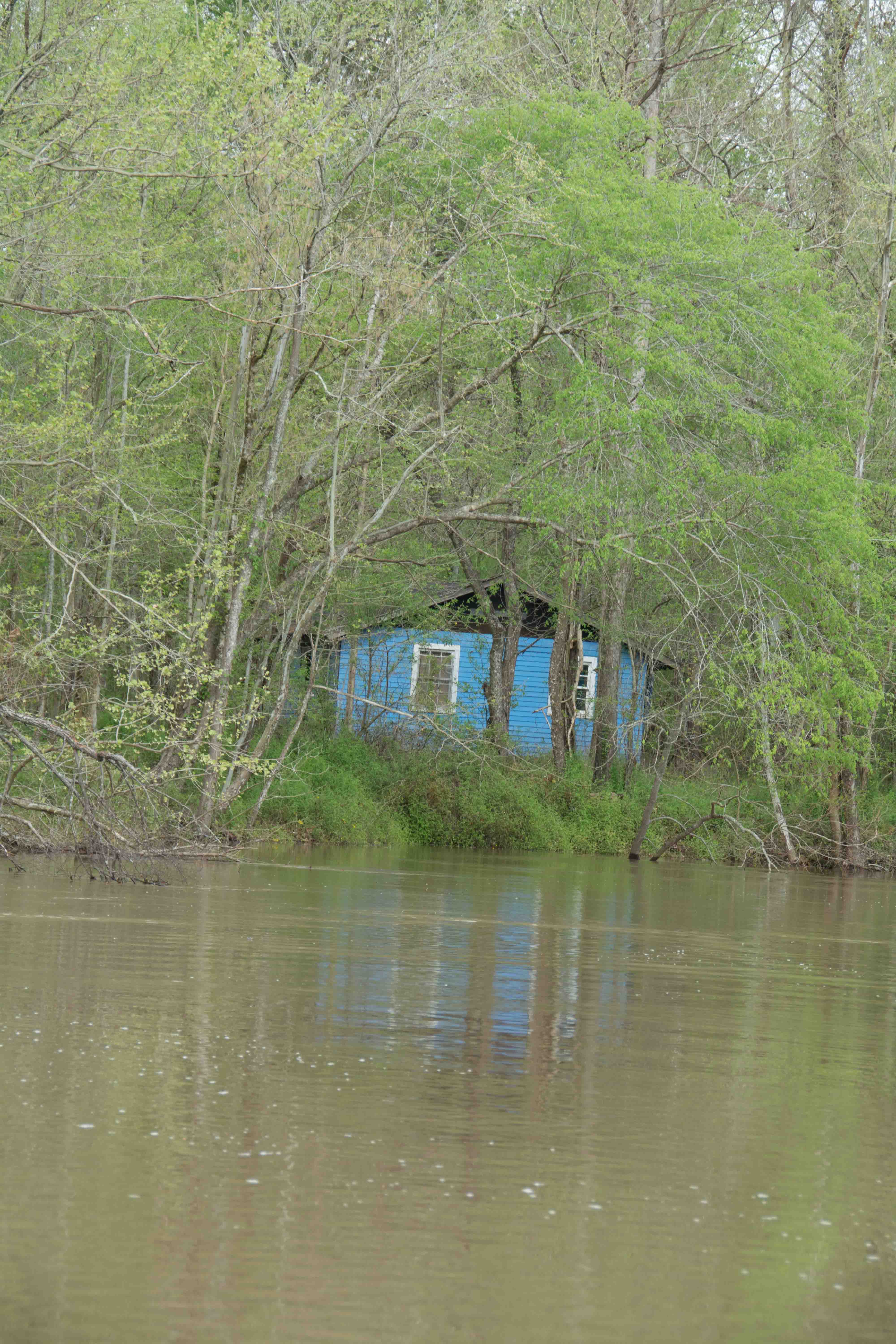 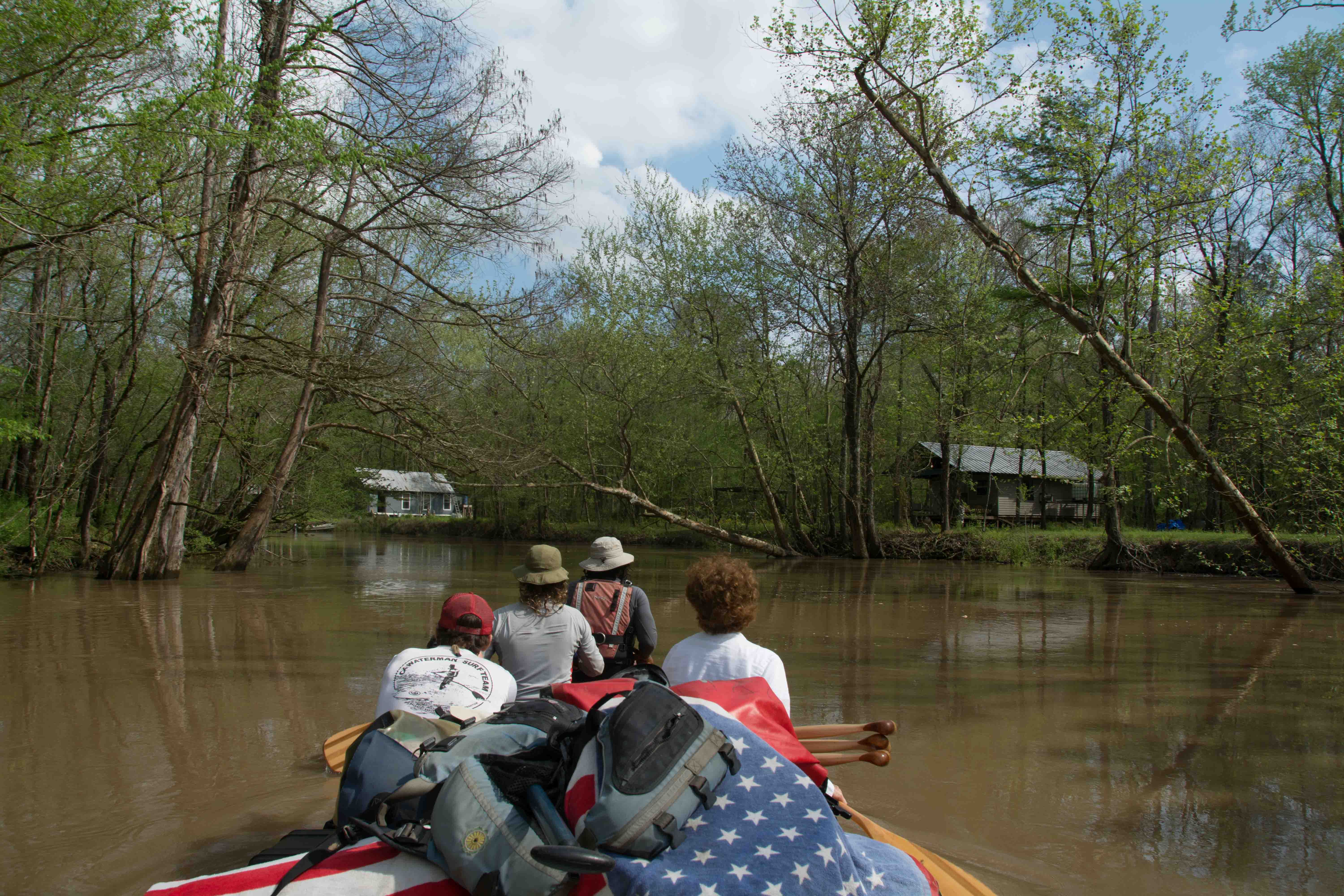 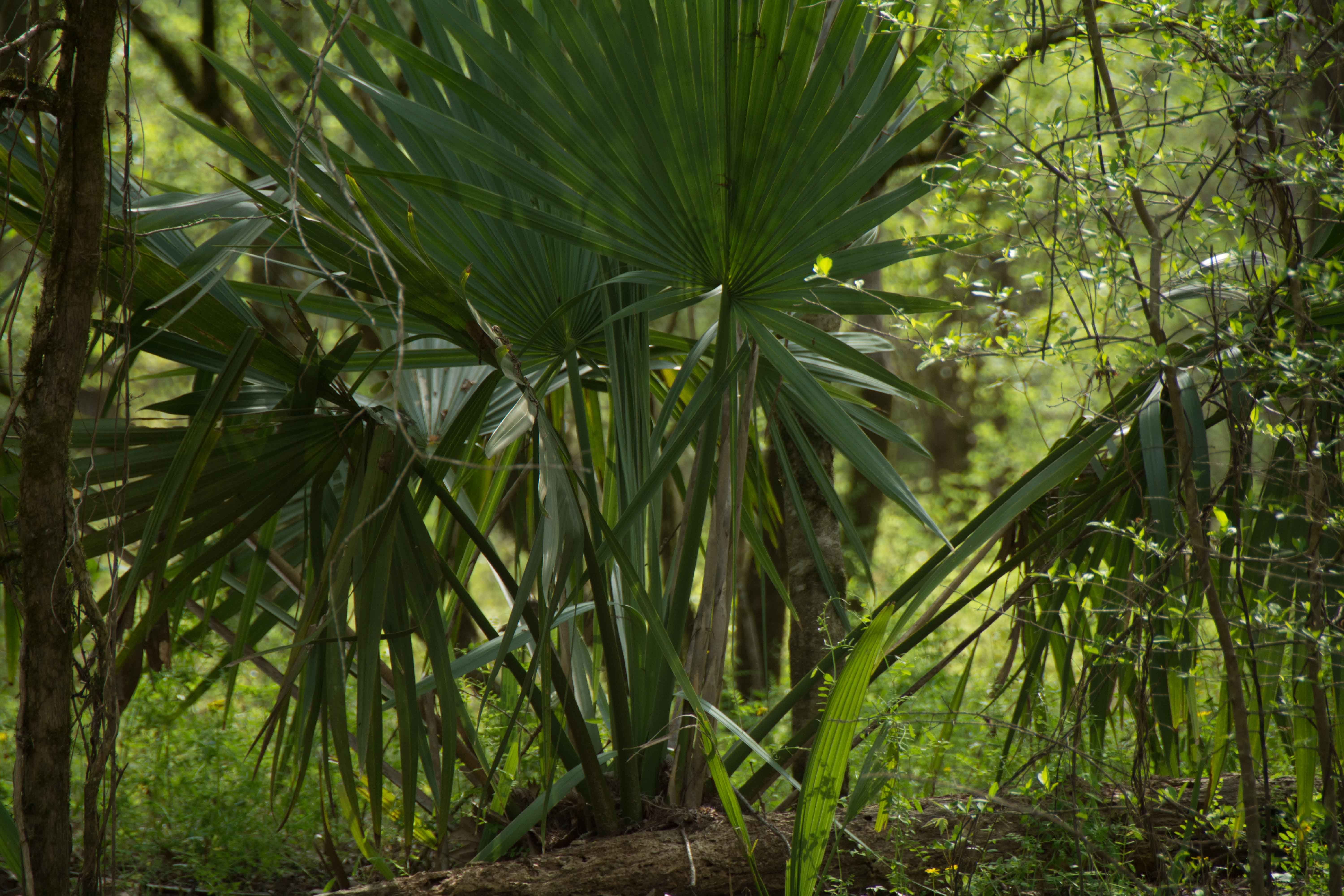 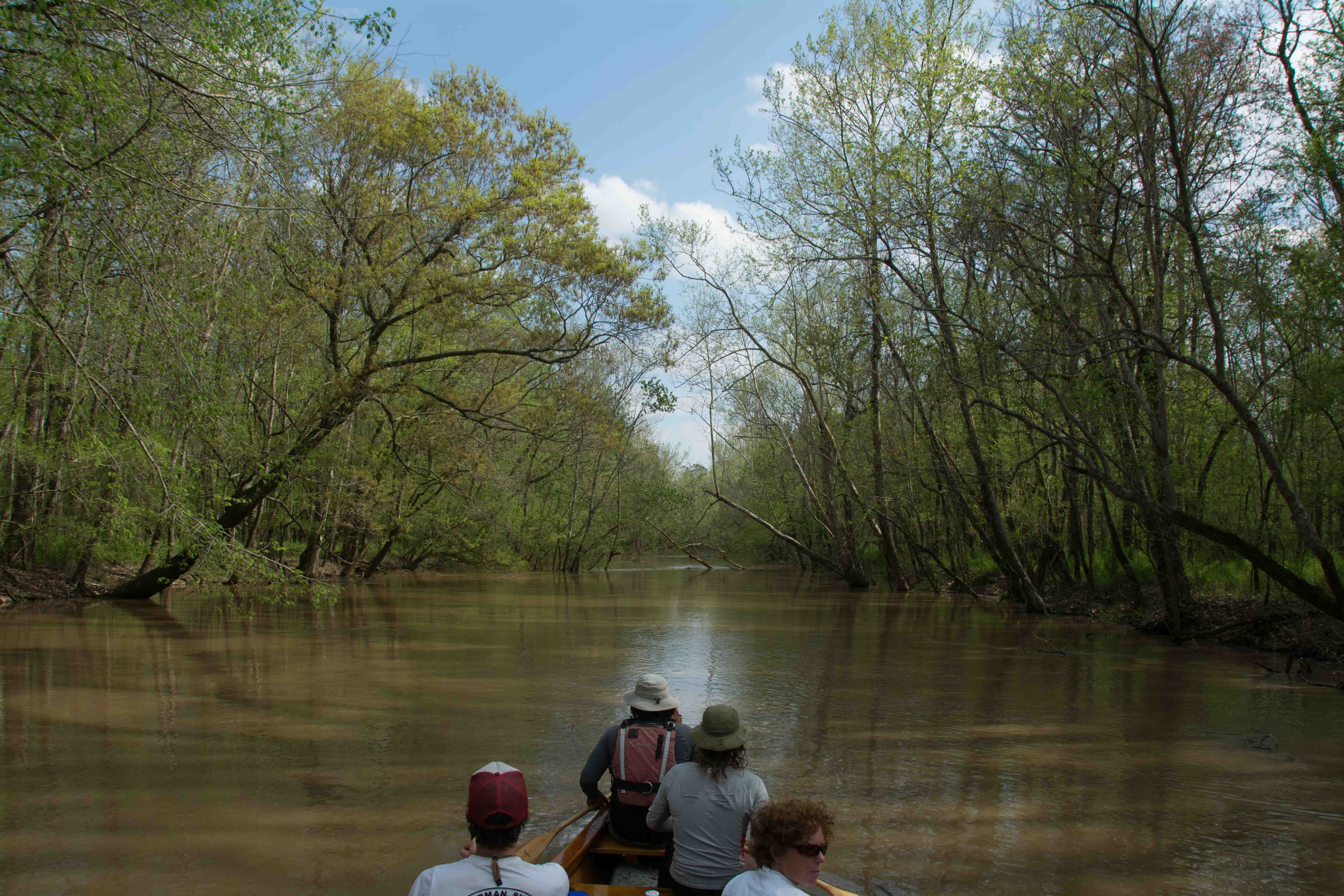 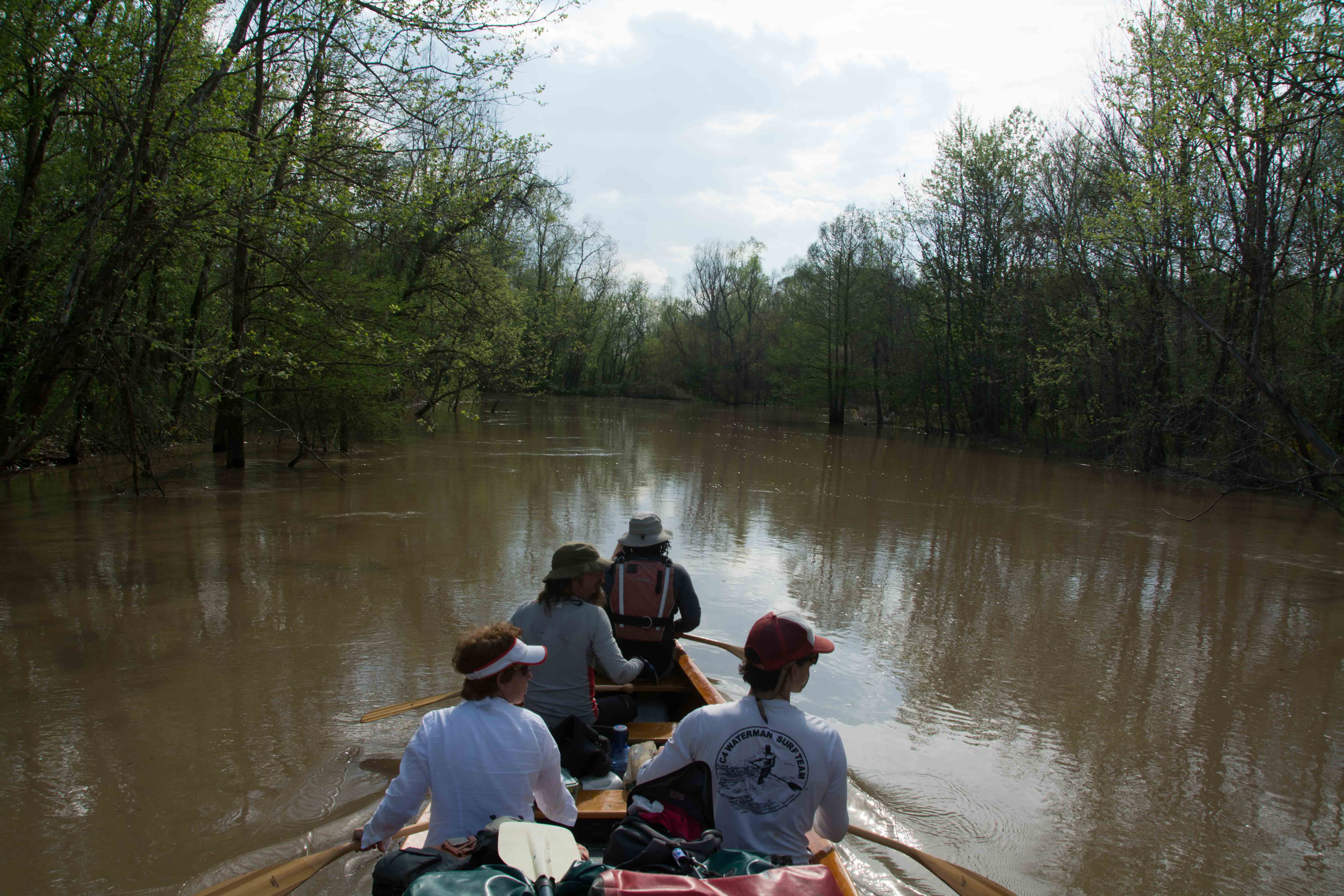 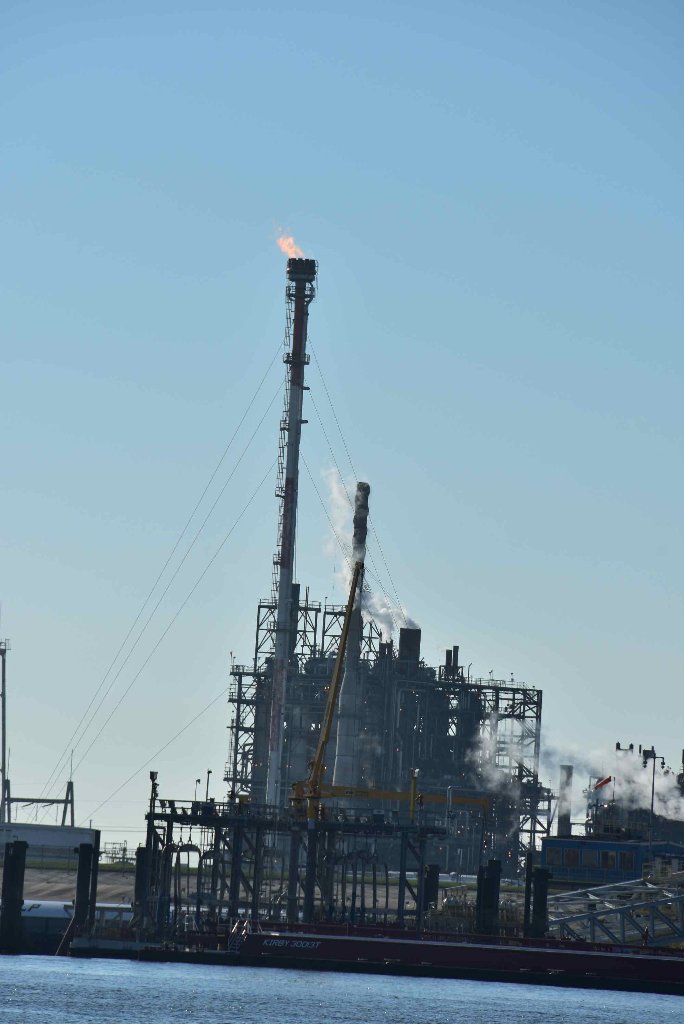 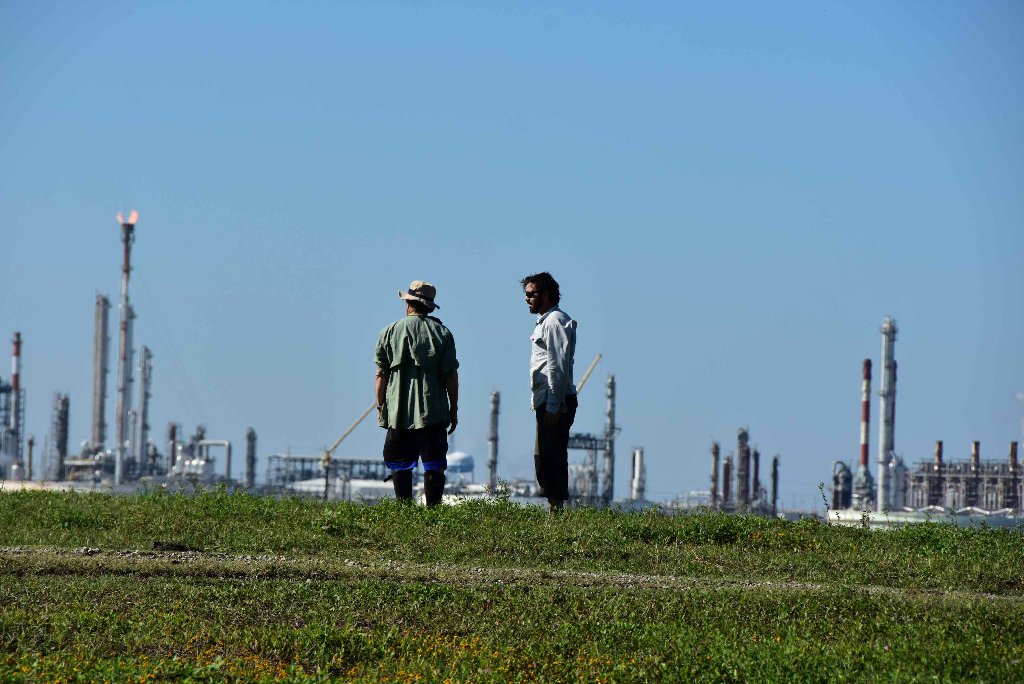 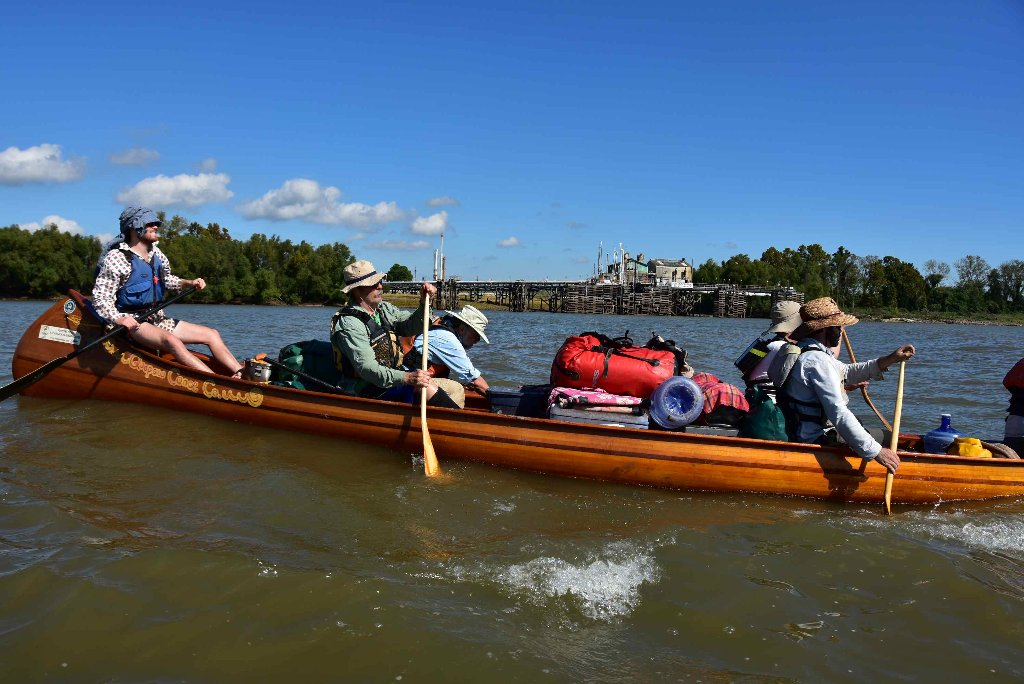 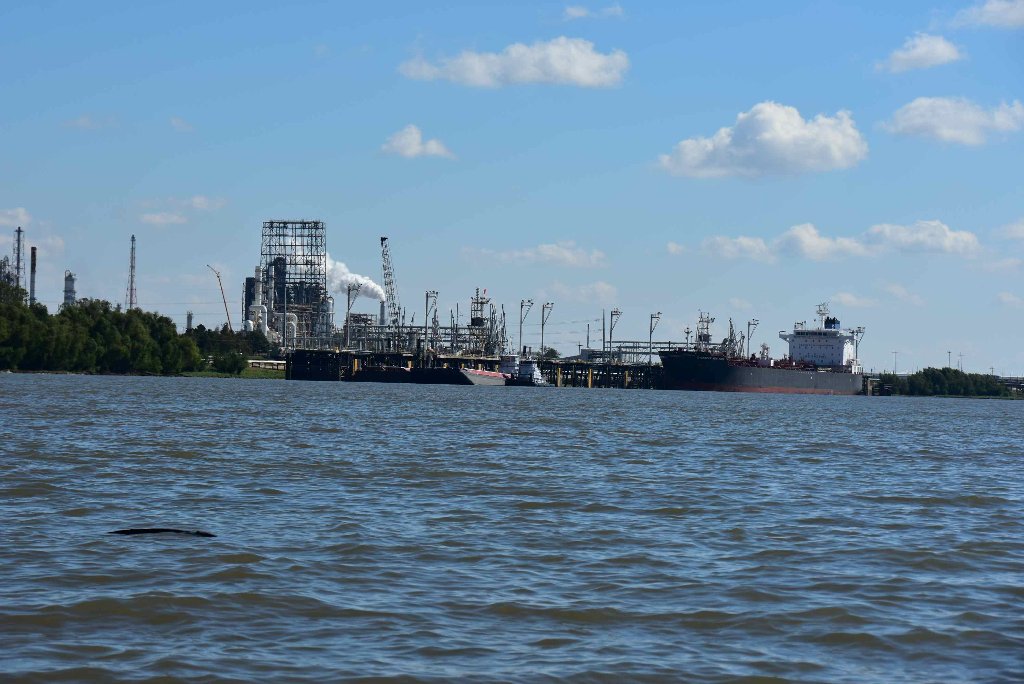 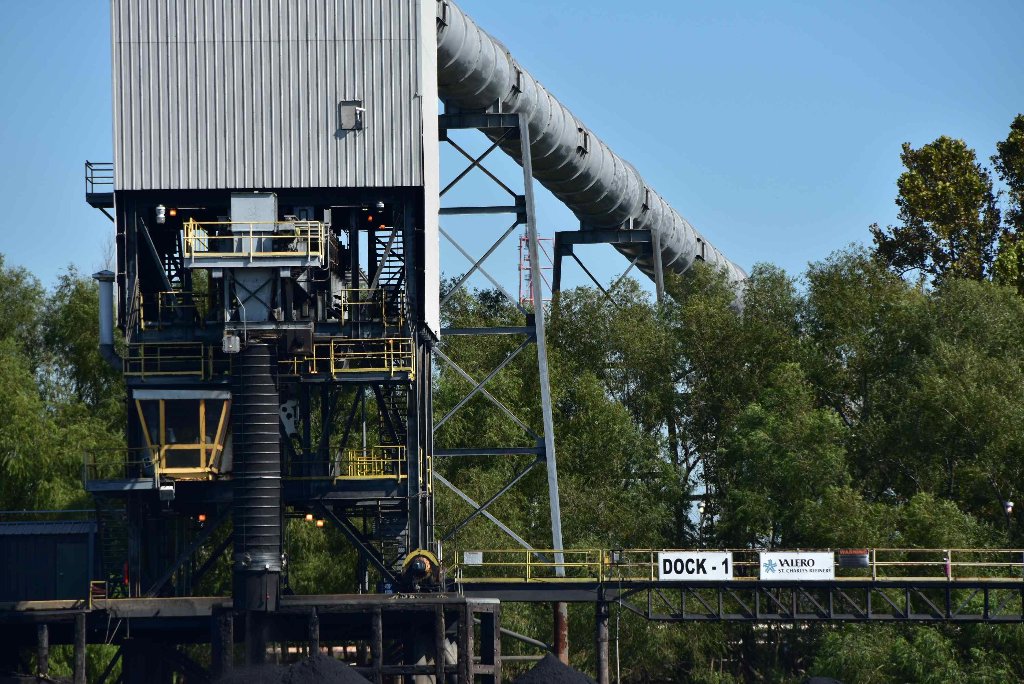 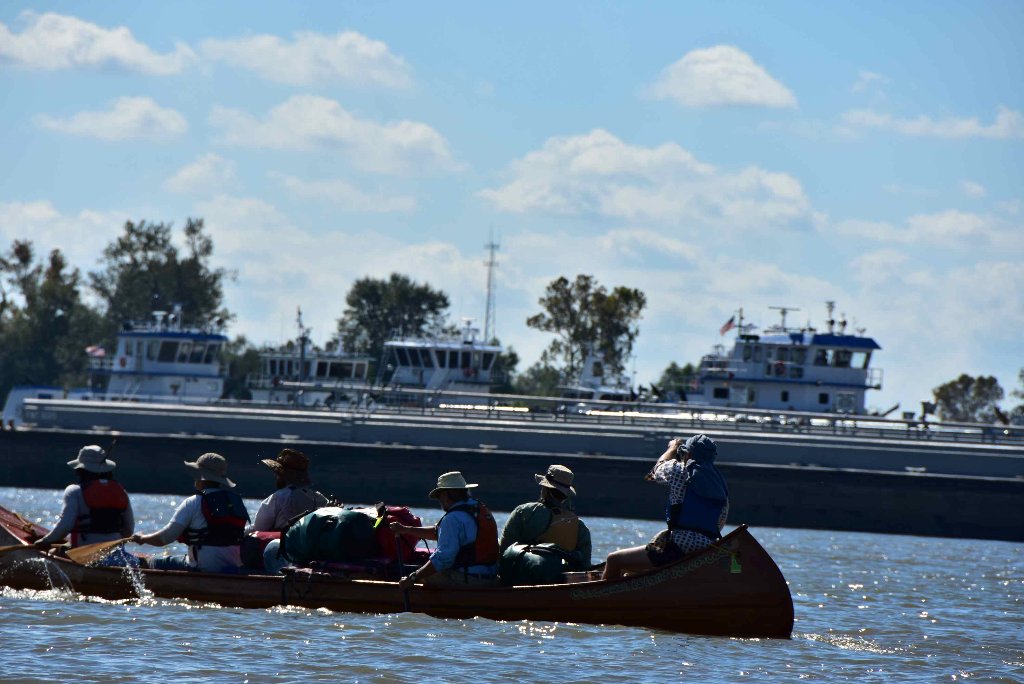 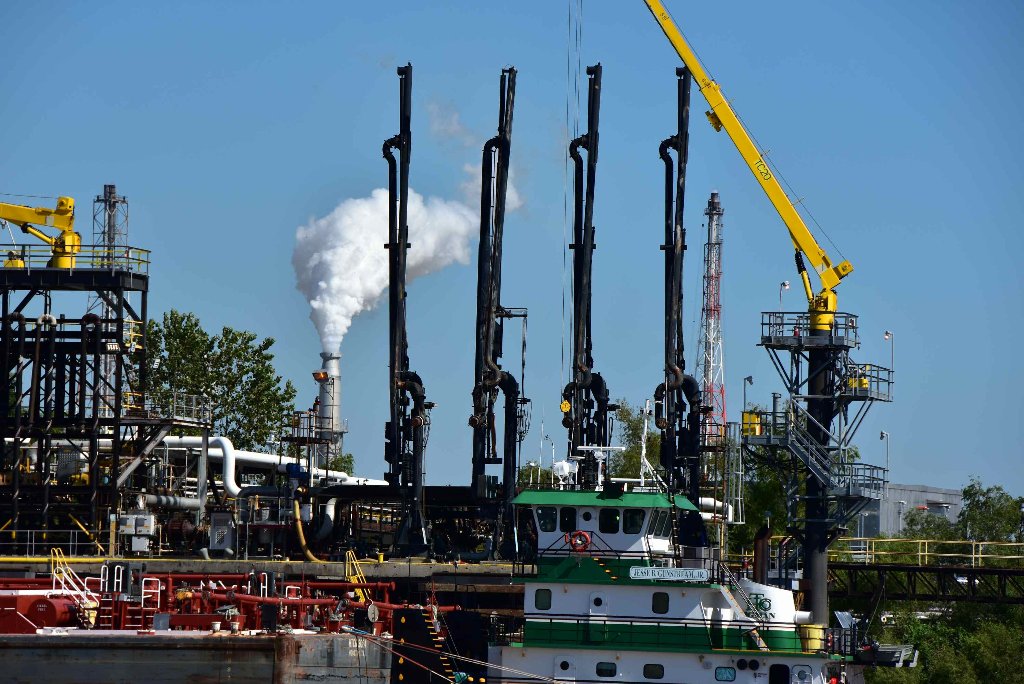