Manchac Point is the first of the classic “Blind Corners” that paddlers will encounter after passing south of Baton Rouge. Unlike the gently curving bends you’ve enjoyed above Baton Rouge, for some geologic or hydraulic reason the bends of the river below Baton Rouge often curve around a single crux point, sometimes with a 180 degree swing of direction. The river seems to eddy and sometimes pool with giant boils at these crux points, and the normal flow of water displays strange behavior, from smooth laminar flow to massive boils and swirlings that seem to wander aimlessly about the river face, and can leave paddlers in a bit of confusion. This can be a bit un-nerving to lose all your current at one of these points. But imagine the extra fright when you lose all your current and then simultaneously you are confronted with an oncoming freighter who has suddenly appeared downstream and is furiously headed your way full steam ahead and you seem to be directly in its line of passage!

At Manchac Point the entire river squeezes down to half its width, so you can visualize what happens to water speed, river depth and turbulence. All liquid parameters seem to increase in inverse proportion. Whatever width the river loses it adds to its other factors making for a riverscape full of surprises and transformational beauty. Be ready to for a wild ride on windy days, stormy days, or when a tugboat has passed by. On calm days you will find yourself casually maneuvered by swirly meanderings, and may be amazed by the expressions of boils and whirlpools, the reflections of the sky, the forests, and the clouds stirred into the muddiness of America. When you make landing the view upstream and down is a rich mixture of tall trees with a fantastically taller radio tower rising behind like the beanstalk in Jack’s fable, disappearing into the atmosphere on cloudy days. Freighters parade around Manchac Point making a graceful dance with carefully placed steps. The lower the water the better the view from the sandbar. You can see miles down Medora Crossing with Plaquemine Island peaking like a child playing hide-and-go-seek from around Clara Belle Landing (halfway down Plaquemine Point). At the end of this great causeway rises the crackers and towers and burn-off flares of Dow Chemical, its lower docking facility also visible as a line of bright lights after dark. The distances are so great that even the giant sea-going freighters appear to be toys as they appear and disappear around Plaquemine Island.

If you intend to camp at Manchac Point stay right bank descending along the West Bank and enjoy close encounters with wildlife and a tangled forest falling into the water. A thick sycamore forest gives way eventually to willows. Towards the end of the point giant black willows punctuate the otherwise thin forest. Hidden over the bank a narrow slough choked with trees parallels the main channel. This slough is only accessible when the river is bank full, 30 BR or higher. The best sandbars form below 214.8RBD just beyond the sharpest point of the bend. I guess you could consider them “downstream” of the bend, or maybe you could say in the pooling area below the bend. It seems as if the turbulent waters flush the sediments out of the bottom of the river here and deposit the best sand in high piles past the crux of the bend.

Manchac bursts open with insects like dragonflies, buffalo gnats, cicadas, mayflies, wasps, wild bees, and many moths and butterflies including monarchs (in their season). You might see crawfish chimneys here growing up amongst the elephant ears and sagitaria along the muddy banks. Meanwhile out on the open sand bar red grass and other grasses, vines and weeds take hold where they can. At low water levels 0-12 BR there will be endless choices for landings along the mile-long length of biggest and best bar (from approx 214.5 down to 213.5 RBD), with other smaller bars forming above the point. At low water you will also find a long line of skinny bars descending downstream of 213.5 below the tree line becoming muddier and muddier in composition and bisected by layers of deep squishy black mud with questionable heavy metal content. Beautiful protected inlets form at low water, and are found as the water rises in various shapes and configurations. Look for a particularly protected harbor at base of big dune above the main sandbar between 5 and 10 BR. You can paddle into this protected place, and make landing without having to worry so much about big waves from freighters (and others). A protective ring of shallows forms around this harbor and as result destructive waves are greatly reduced by the shoaling effect. You will find this same protection at various other landings further downstream, such as at the head of some of the smaller passes (notably Baptiste Collette at mile 11 LBD).

At medium water levels 12-22 BR all secondary choices above and below 214.5 disappear, but you will still have acres of high ground to choose from on the high ground atop the main bar at 214.5 RBD. Manchac Beach will accommodate paddling groups of any size at any water level up to bank full. At bank full 30BR you will have to camp in the willows at the edge of the river. There are no protective sandy harbors at this level, but you will be able to pull your vessel up close to camp, and the tent sites will be as good as it gets. Amongst the willows you will find buttonbush, mimosas, pea vine and chamomile growing on the sandy ridges, with blood clot grasses and aromatic flowers. Camping becomes increasingly limited above 30BR, and disappears completely at flood stage.

As you round Manchac Point, on the left bank descending you can see a slender row of trees peaking over the levee. These trees, mainly young cypress, mark the historic channel of Bayou Manchac. The first European given name of this bayou appears on early maps as the Iberville River. French Canadian Explorer and founder of French Louisiana, Pierre Le Moyne d’Iberville, along with his brother Bienville (founder of New Orleans and 4 time Governor of the Louisiana Territory) first came across Bayou Manchac on their successful 1699 expedition to locate the mouth of the Mississippi River. After traveling upriver from the Gulf all the way to just north of Baton Rouge, Iberville’s party descended the Mississippi in March of 1699.

At three o’clock in the afternoon, we got down to the stream(Bayou Manchac) that goes to the Bylocchy (Native American tribe with settlement near where Iberville’s fleet is moored, “Biloxi”) and to the bay where the ships are. I have seen no possibility of getting the longboats through it. M. de Sauvole (first Governor of French Louisiana) has gone on in the longboats. I have ordered him to take soundings of the river mouth and the middle pass: and my brother (Bienville) went on in my longboat, in which was the chief of the Bayou Goula (Native American tribe with settlement on west bank of Mississippi River). He gave me a Mougoulascha (Native American tribe) to guide me to the sea by way of this little stream, which I entered about four oclock in the afternoon with the two bark canoes and four of my men and the Mougoulascha. I went 2 leagues (1 league roughly equals 3.25km) down it and there spent the night. This river or creek is no more than 8 or 10 yards wide, being full of uprooted trees, which obstruct it. During low water there are 3 to 4 feet of water: during high water 2 to 3 fathoms (1 fathom = 6 feet). Within these 2 leagues I have made ten portages, some being 10 yards long, others 300 or 400 yards, more or less.

At the direction of the Native Americans, Iberville took Bayou Manchac as a short cut back to the Gulf of Mexico where his fleet was anchored. He traveled in two bark canoes from the afternoon of March 24th until just before noon on the 31st when two of his boats picked him up as he crossed the Mississippi Sound heading towards Ship Island off the coast of present day Gulfport, Mississippi. The first 8 miles of the journey from the head of Bayou Manchac at the Mississippi River to where Alligator Bayou merges into Bayou Manchac is a twisted and shallow, sometimes dry, stretch of bayou choked with trees and brush. The bayou is easily navigable by canoe from Alligator Bayou on. Iberville’s short cut began in Bayou Manchac but meandered some 164 miles to where his ships were anchored. This route began in the fresh waters of the Mississippi River, descended Bayou Manchac and the Amite River through Cypress / Tupelo swamps, crossed large lakes, paddled through salt marsh and set across the open waters of the Mississippi Sound.

According to Mary Ann’s Along the River Road, “Manchac” is thought to be “rear entrance” in Choctaw. Bayou Manchac offers a unique opportunity to trace the path of the legendary Iberville, winding along the bayou much as the bark canoes must have some 300 years ago. Today, a portion of the bayou beginning in St Gabriel though not navigable by boat is traced by a road that offers a beautiful drive for several miles. If your lucky you can find the oldest tree in sight, feel it’s bark and imagine that the hands of Iberville himself brushed along this same surface as he labored through this clogged stretch of Bayou. Or simply rest in the shade of these ancient trees knowing they would have contributed their breathe to his lungs as they do to yours now. These same trees were documented by famed botanist William Batram when he traveled Bayou Manchac from the Amite River to the Mississippi during his journey in 1775 and were said to have been “…trees of the first order in magnitude and beauty.” Sadly, hardly any old growth timber remains in Louisiana as most was logged by the mid 20th century.

Though never having a consistently navigable connection to the Mississippi River, Bayou Manchac was temporarily dammed by order of General Andrew Jackson in defense of the City of New Orleans in 1814. The Louisiana Legislature then mandated permanent closure of the bayou in 1826. Much debate continued about the usefulness of Bayou Manchac and the possibilities of its navigation for many decades, this dream being explored as recently as 1977. Never the less, for most alive today, Bayou Manchac is merely a note in the history books or a line on the map dividing parishes. Recent years have seen challenges from development, flooding and an excessive littler problem as the bayou receives an enormous quantity of trash washed out from the sprawling city of Baton Rouge. But much like the Mississippi, Bayou Manchac is ripe for rediscovery by present day explorers. It faces its fair share of challenges and is a far cry from the pristine wilderness that the Native tribes must have thrived in but a journey along its dark and storied waters is well worth the effort. (Michael Orr) 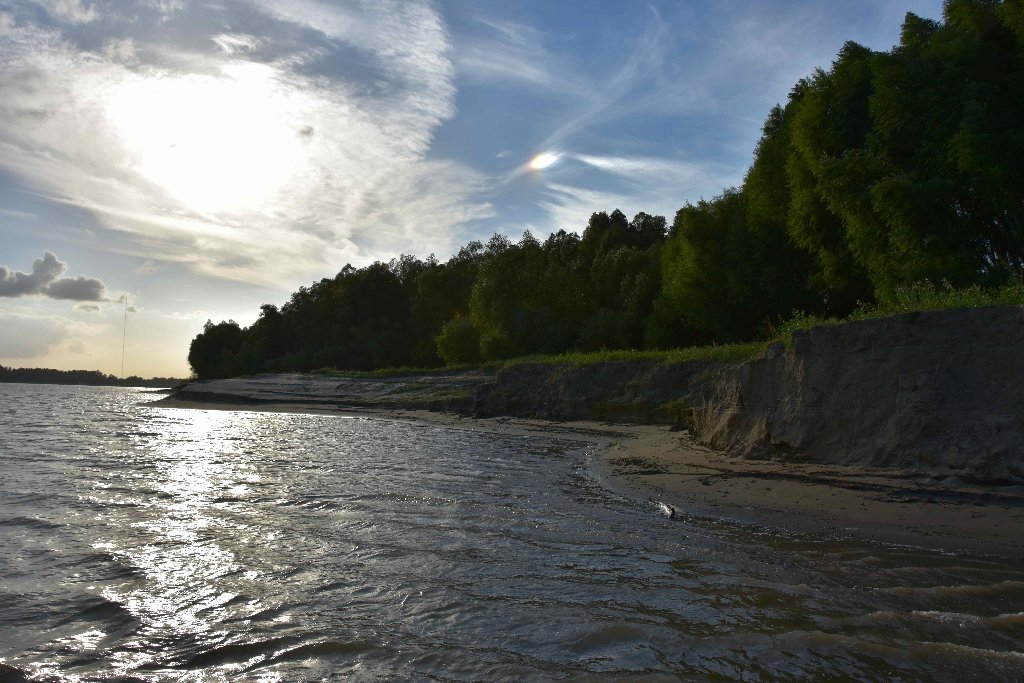 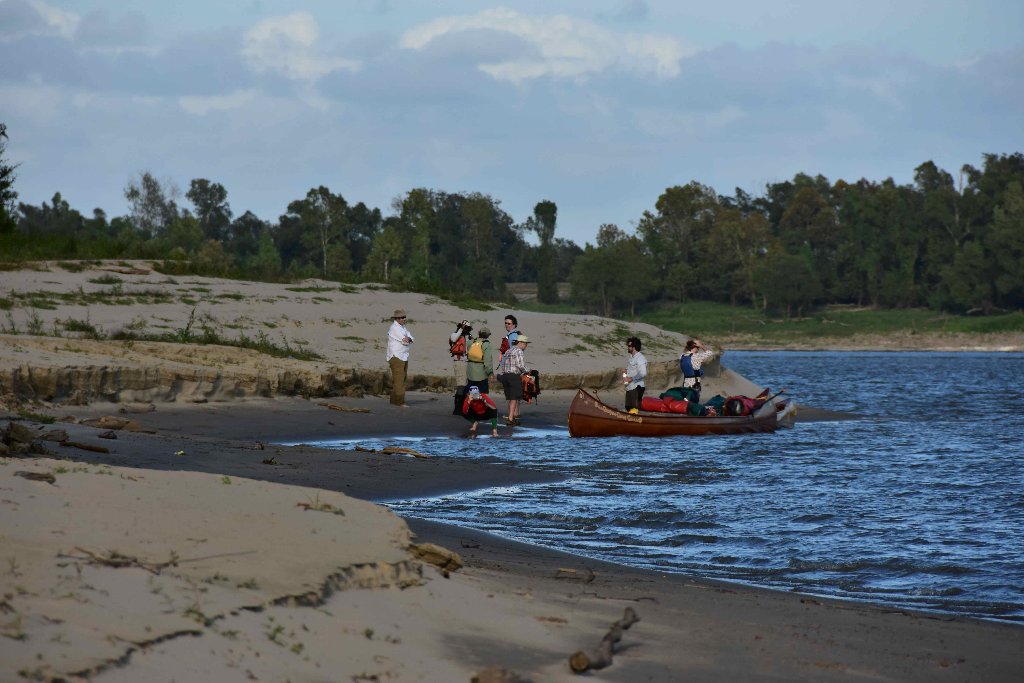 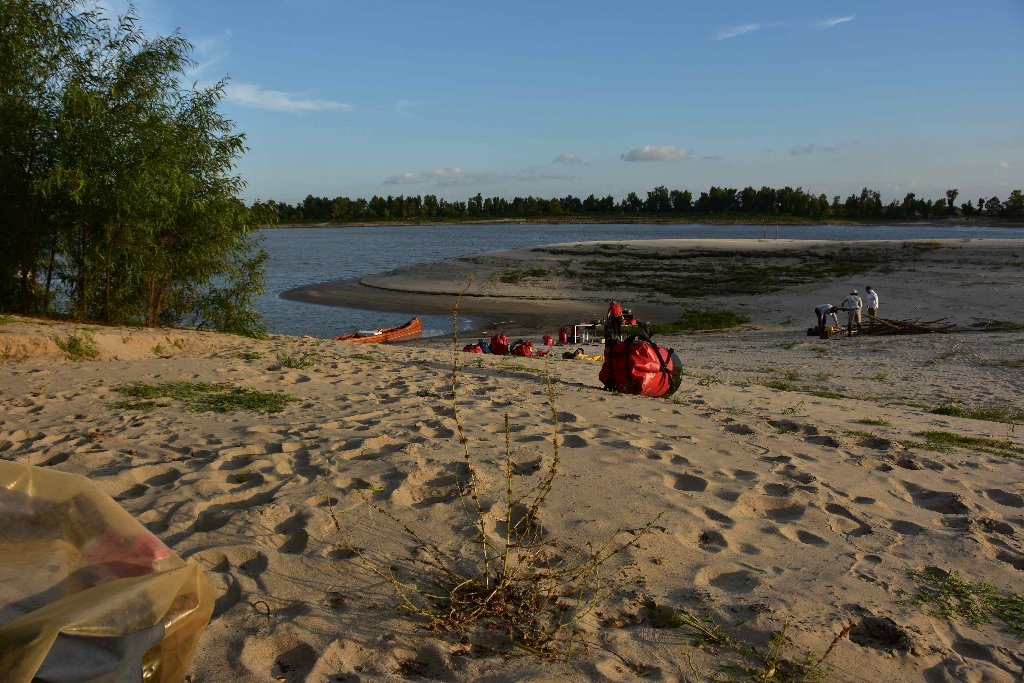 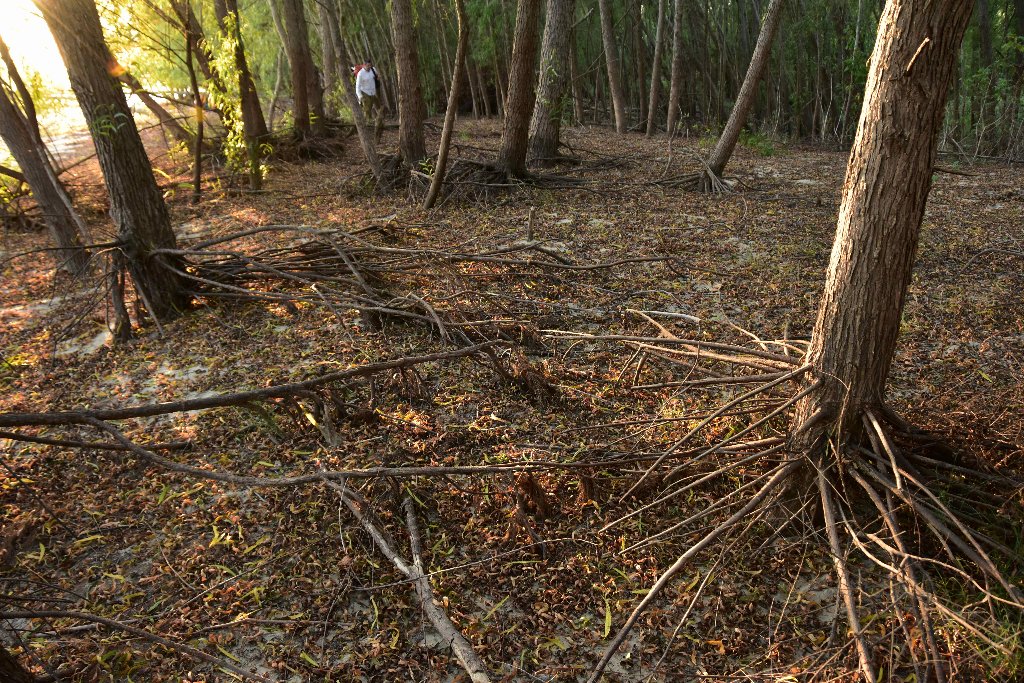 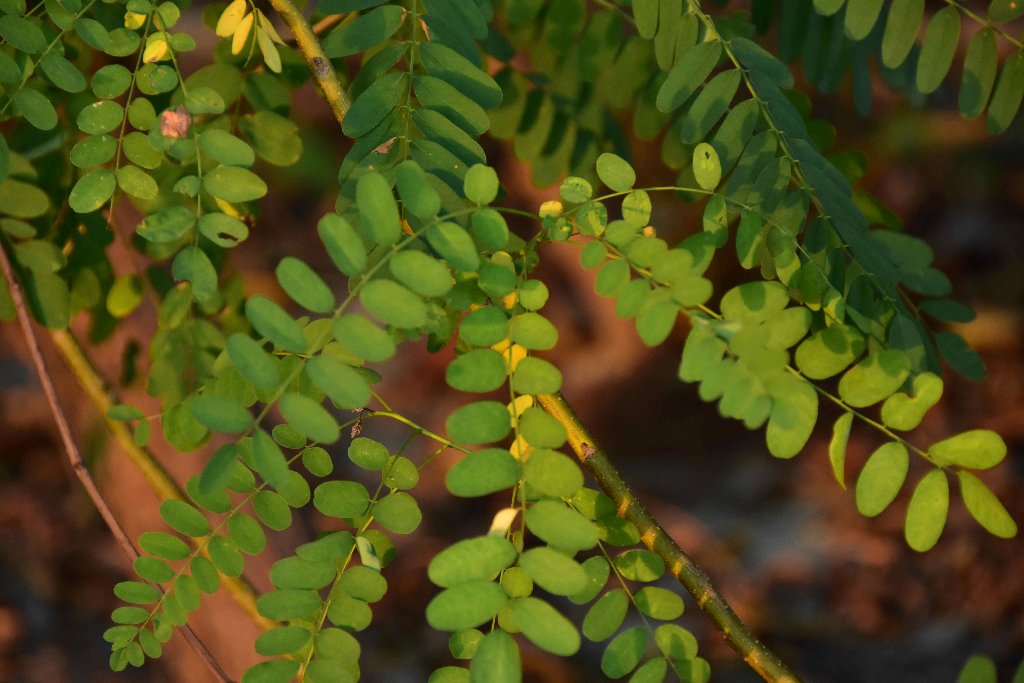 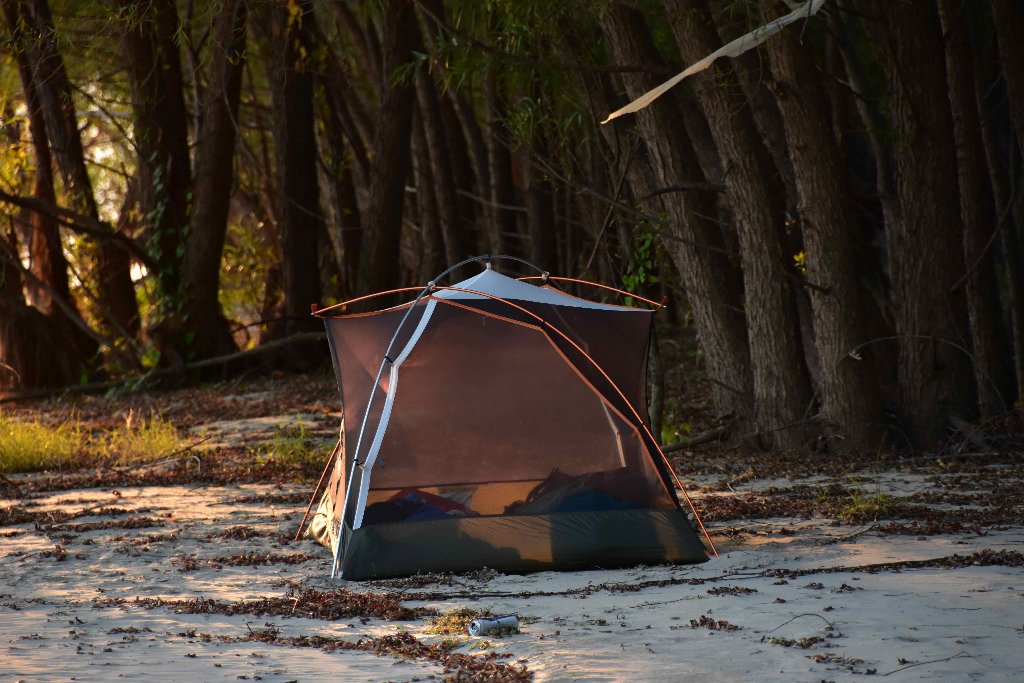 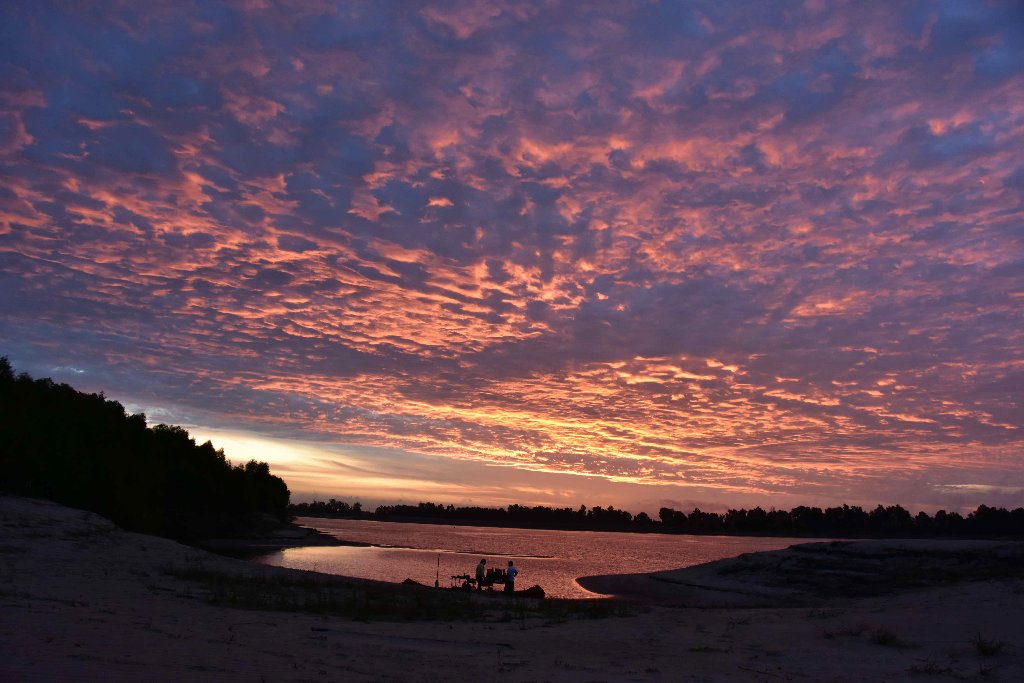