Paddlers can make landing on a rocky landing directly downstream of the Louisiana Responder, or pull up directly below ramparts of the fort, also a rocky landing. If these rough landings don’t fit your temperament, keep downstream another 200 yards to find a much softer landing before (or behind) a sandy spit that extends outwards to a sharp point near 19.5 LBD. Shallow muddy sandbars emerge here in low/med water at low tide. You could pull up and make camp here, but there is vehicle access and you might have visitors. Popular fishing spot. If you want to visit Fort Jackson, safeguard your vessel and do so. But you will locate the best camping options another half mile further downstream, around the bend, where the river turns southward, and a narrow beach is found with a sandy ridge running above. Best camping in the area.

Fort Jackson, built upon the recommendations of Gen. Andrew Jackson, following the War of 1812, and replaced an earlier fortification, Fort Bourbon, which was located less than two miles away. Fort Bourbon was an earth and timber breastworks redoubt built in 1792. It was destroyed by a hurricane, and eventually surrendered to the Mississippi River. In his attack upon New Orleans during the Civil War, Farragut’s fleet pounded both forts for ten days, before they surrendered to the Union forces. In the years that followed, Fort Jackson was used as a prison, a training facility, and fortified again during the Spanish American War, when disappearing guns with elevators were added, along with additional concrete bunkers. During World War I, it was once more used as a training facility, and then was retired after the war. Fort Jackson is located along LA Highway 23, at Plaquemines Bend (about 12 miles above Venice, LA), and is now accessible to the public as a historical tourist and cultural recreational center.

Fort Jackson was declared a National Historic Landmark in 1960. It has been owned by Plaquemines Parish since 1962. In the 1960s, Leander Perez threatened to turn it into a prison for any hippies and advocates of desegregation who entered the Parish. The fort was badly damaged by Hurricane Katrina’s storm surge in 2005. Between Katrina and Hurricane Rita the following month, much of the fort sat under water for up to six weeks. Many of the historic exhibits in the fort were destroyed, and the fort itself suffered structural damage. The fort was used to treat oily birds in the early weeks of the Deepwater Horizon Spill of.

2-3 miles to the open beaches of Raccoon Point on Breton Sound.

Harvey Pass carries water off the Mississippi below Fort St. Philip through a convoluted series of channels, oil pipeline canals, and bays to the Gulf at the edge of Raccoon Point. Raccoon Point has sandy beaches that could make a fitting end to you expedition if you’re ready to end now, and not paddle to the Head of Passes. This could also be a refreshing side trip if you have an extra day for exploration. There are 3 routes you could follow, the first one is the easiest: 1) Follow Harvey Pass north from the Mississippi River sticking to the deepest channels. At the intersection of a diagonal canal turn left (northwesterly) and follow it one mile until reaching a sandy beach at the open ocean. This is the quickest route and the best beach on Raccoon Point. 2) After paddling through Harvey Pass one mile, you can veer northwesterly through shallows and reach Bay Denesse. From Bay Denesse you could jump out into the open waters of the Gulf at Quarantine Bay. Follow the edge of Quarantine Bay easterly to reach the open beaches of Raccoon Point. 3) Stay northerly on Harvey Pass and then northeastward through Plaquemines Bay to reach the open waters of Breton Sound. Then follow the shoreline westward along the sandy edge to reach the beautiful beaches of Raccoon Point. All the marshes around Raccoon Point are disappearing, and the sandy points and beaches are being washed further and further back towards the main river.

There are a multitude of branching distributary passes to follow from St. Phillip’s Bend Pass, you could follow any of them to reach the Gulf and then easily paddle back. As with Harvey Pass this could be an interesting side trip, or it could be the end of your expedition.

Plaquemines Bend is the very last of the tight bends of the Lower Mississippi River! After hundreds of bends and turns of the river on the Lower Miss, and then dozens of “blind corners” below Baton Rouge, this is the very last one. Congratulations paddler. You have moved one position closer to the culmination of your expedition.

But don’t let your guard down yet. This is one last place where you will need to exercise extra caution as you follow the currents around the bend and paddle into the straightaway below. To stay in the fast water, a crossing will be necessary sooner or later. Fastest water route is following the outside of the bend round Bolivar Point, go right bank past the Louisiana Responder and Fort Jackson, follow the strong water outwards and across the main channel over to the East Bank towards Olga 16LBD. The Bootheville Anchorage starts at 18.5 along the West Bank, and most traffic stays mid-channel. You can follow whatever line of travel you want, of course deferring to oncoming freighters, tows, and tugs. The tows have been steadily declining as you travel down to the end of the river, and the few tows you encounter are all either work tows pushing one or two barges, or supply tows pushing 2-6 barges. Many are also without barge and performing the various duties necessary with industry at the end of the river. But now below the Empire Locks you will find fisherman traffic steadily increasing, both sport fishermen and commercial fishermen.

Paddlers can make landing on a rocky landing directly downstream of the Louisiana Responder, or pull up directly below ramparts of the fort, also a rocky landing. If these rough landings don’t fit your temperament, keep downstream another 200 yards to find a much softer landing before (or behind) a sandy spit that extends outwards to a sharp point near 19.5 LBD. Shallow muddy sandbars emerge here in low/med water at low tide. You could pull up and make camp here, but there is vehicle access and you might have visitors. Popular fishing spot. If you want to visit Fort Jackson, safeguard your vessel and do so. But you will locate the best camping options another half mile further downstream, around the bend, where the river turns southward, and a narrow beach is found with a sandy ridge running above. Best camping in the area.

Best camping along this stretch of river in low/med water, up to 10NO.

The levee falls back and the batture becomes wider around Jackson Point, allowing for the return of natural shorelines and good camping for one mile from 19.5 to 18.5 RBD. It is so rare to find natural shorelines on the Lower Miss — those without rip-rap, revetment, or other un-natural means of man-made protection. As result they are always special places. A long narrow sandy/muddy beach emerges in low water below a grassy ridge here, and offers the best camping in the area. Ideal campsites can be found in low water 0-8 NO. You might find dry spots up to 10NO, but everything will be underwater around 12NO. The campsites along the river here are bisected by several inlets, which make for interesting sites, and are are always busy with wildlife, especially birds, but also amphibians, insects, and crustaceans. Behind the sandy ridge paddlers will find a wetlands between the river and the levee, fed by a narrow inlet which responds to the tide changes with water sometimes flowing in, sometimes out. This dynamic place is a birder’s paradise, and creates a buffer for paddlers to find a little peace from the levee and the busy “man-scape” beyond. While Fort Jackson Beach offers a diverse selection of picnicking and camping choices, always make a measurement of river level and camp height to make sure you won’t have any midnight surprises when the tide comes up and a freighter passes by. Also, be very careful of fire ants in this and all land locations in this area. Note: Known pig habitat. Lastly, ATV access possible via south end of beach where it comes close to levee.

Follow St. Anne’s Pass three miles to Little Coquille Bay, or Grande Coquille Bay. The open beaches of Coquille Point are found between the two bays. Coquille Point could be a good camp, but only in calm weather and low water conditions. No protection . Very exposed to all directions of wind or storms. All the marshes at the end of this pass are disappearing, and the sandy points and beaches are being washed further and further back towards the river.

2-4 miles to Grand Bay, Spanish Bay, or other open waters of Breton Sound.

Between West Bank 17 and 16 there five openings are located in succession going into five passes which splinter into other passes, including Fresh Water Bayou, Jurjevich Canal, Olga Pass and Valer Canal. Brett Rogers and his Old Man River Project Expedition followed the Jurjevich Canal into Grand Bay in Dec, 2009, as detailed in Brett’s incredible documentary by the same name, chronicling their 104 day ordeal in a 10-part documentary series that appeared later on the CBC.

Un-Named Pass 2-3 miles to reach Grand Bay. Sandy dunes covered with grass and scrubby vegetation are found in harbor formed by rip-rap at entrance from main river. Possible picnicking and camping on dune tops in low water and low tides, but known habitat for wild pig. 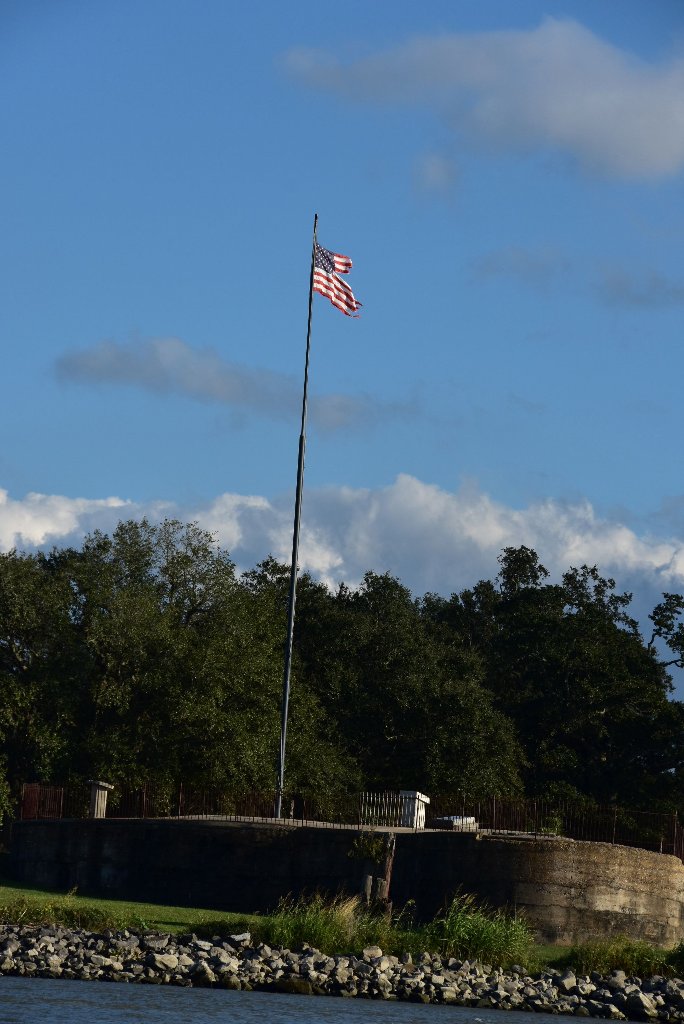 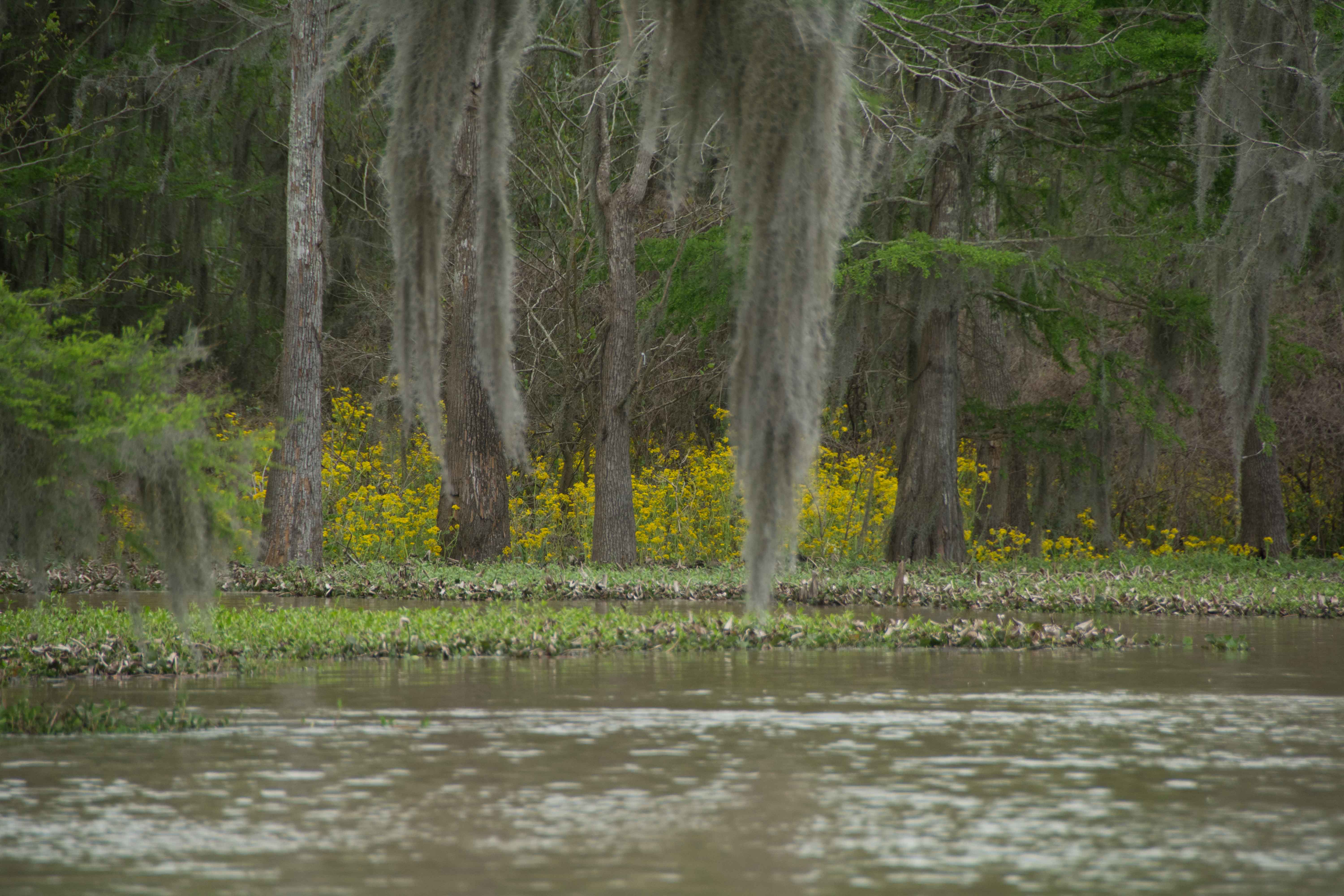 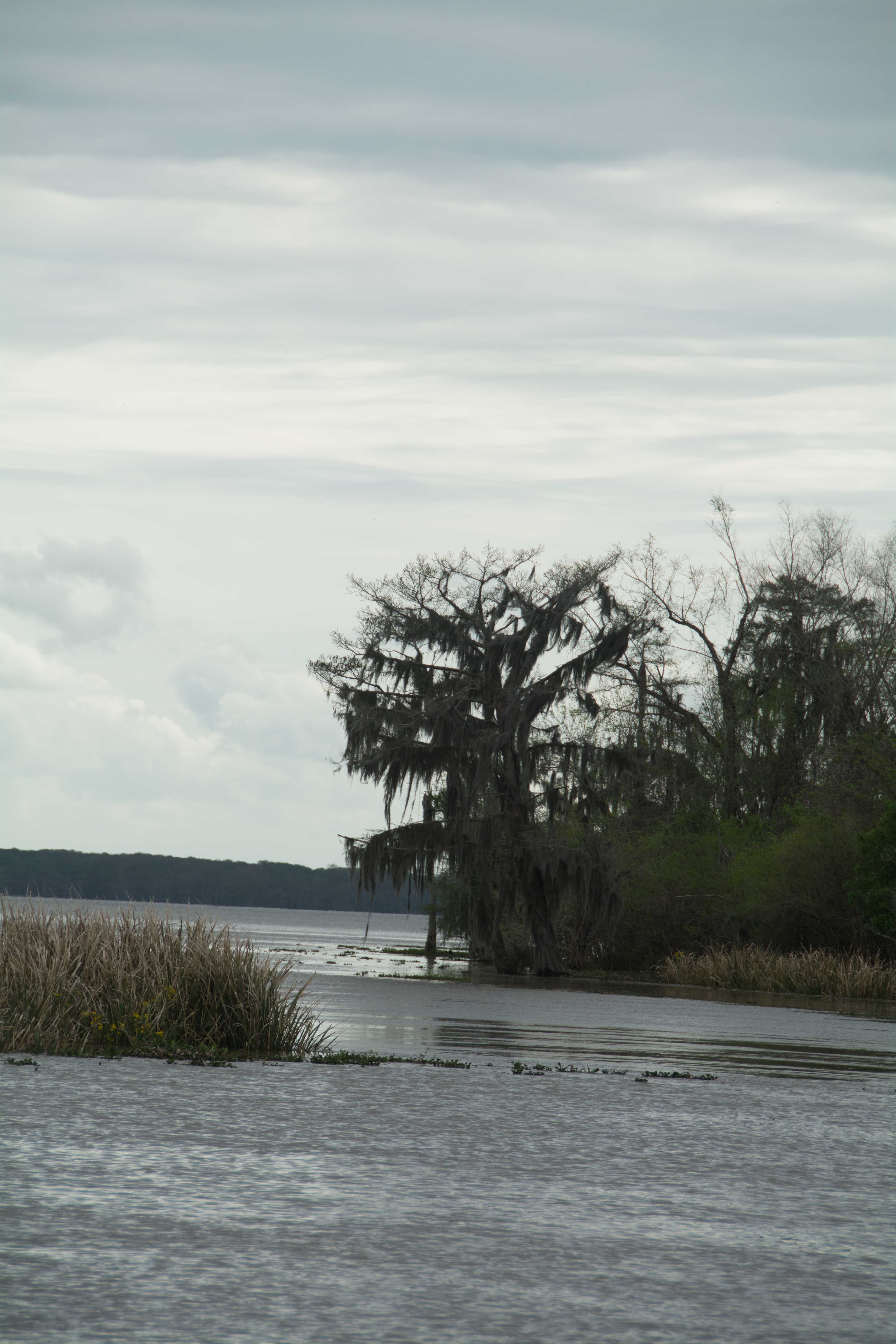 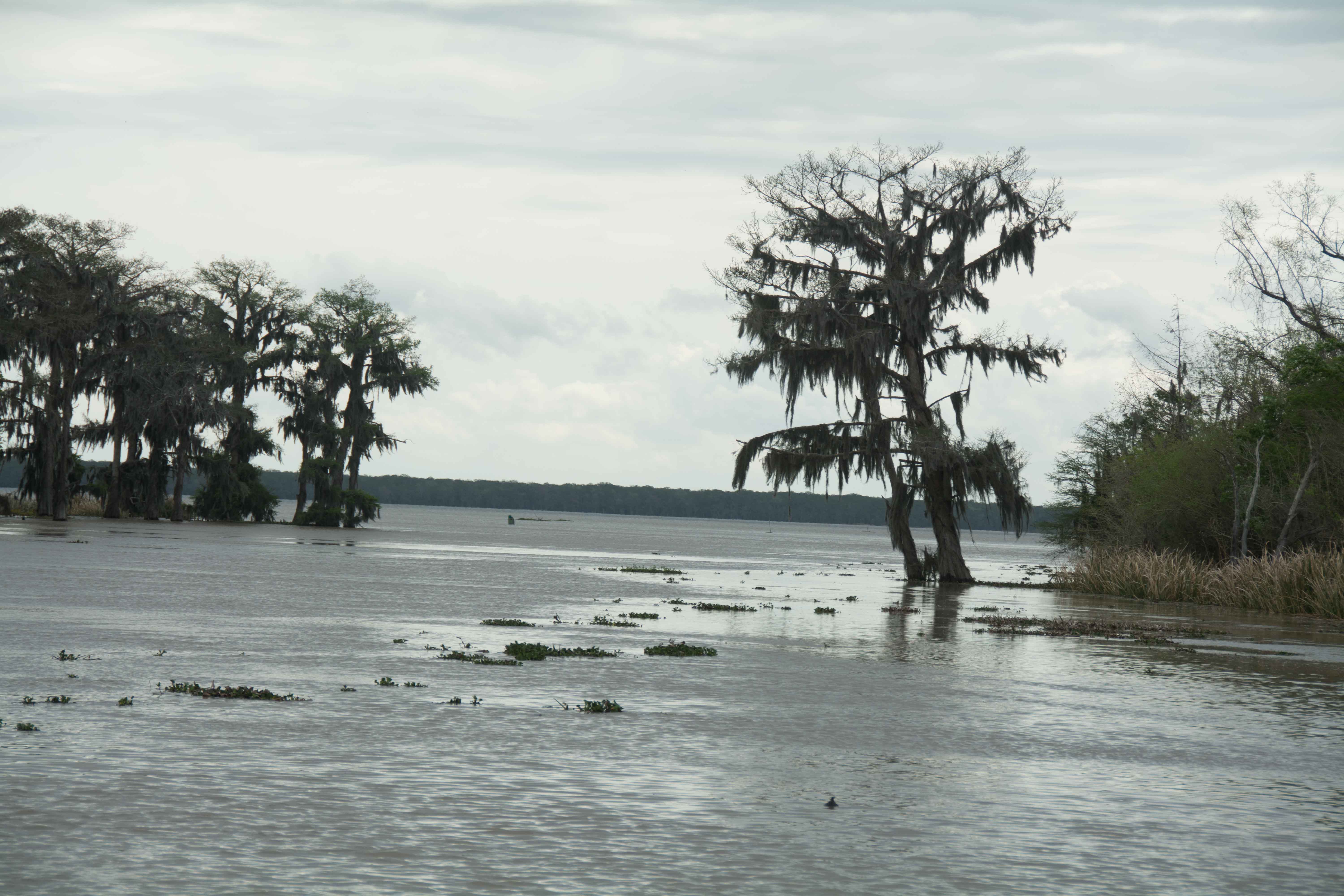 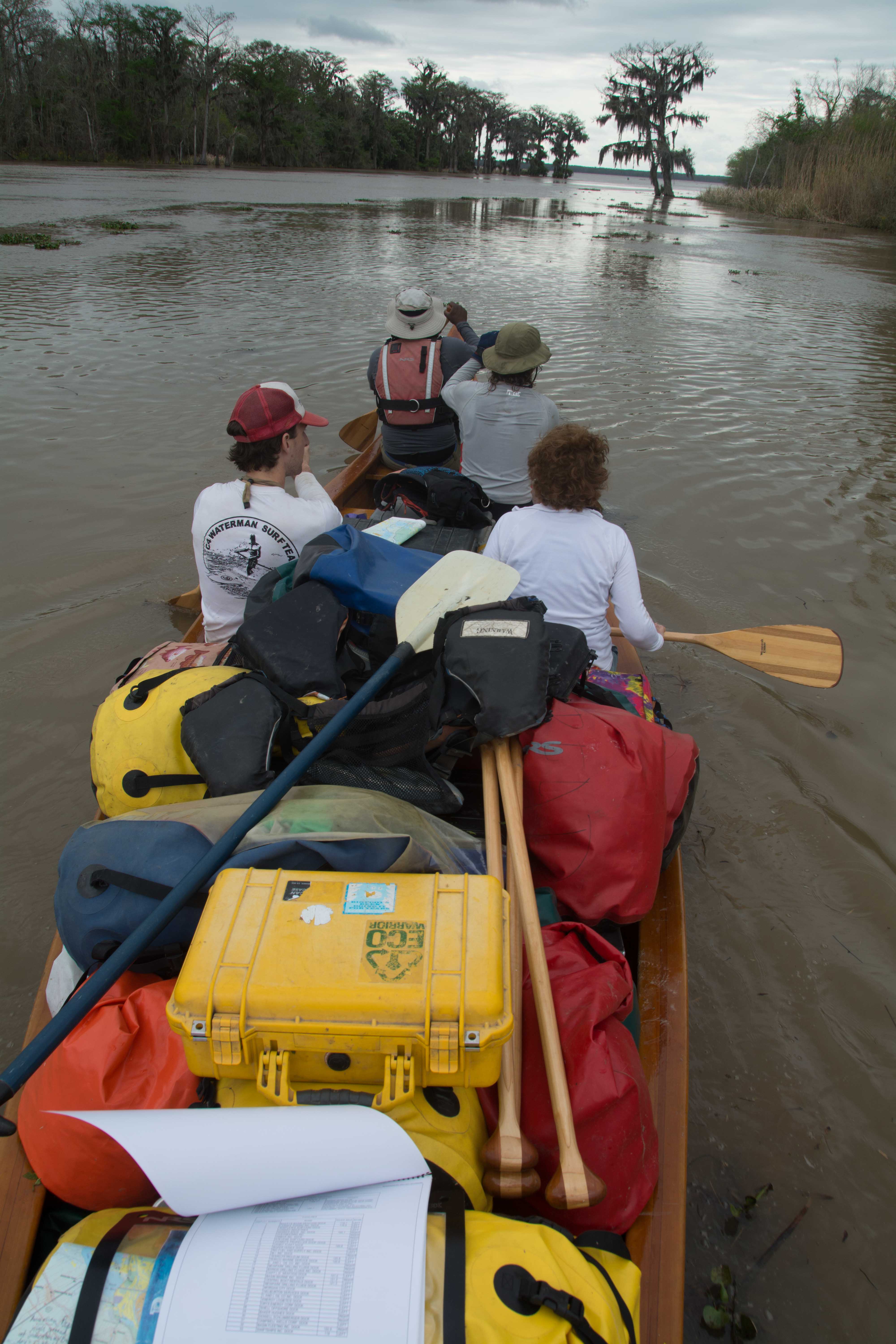 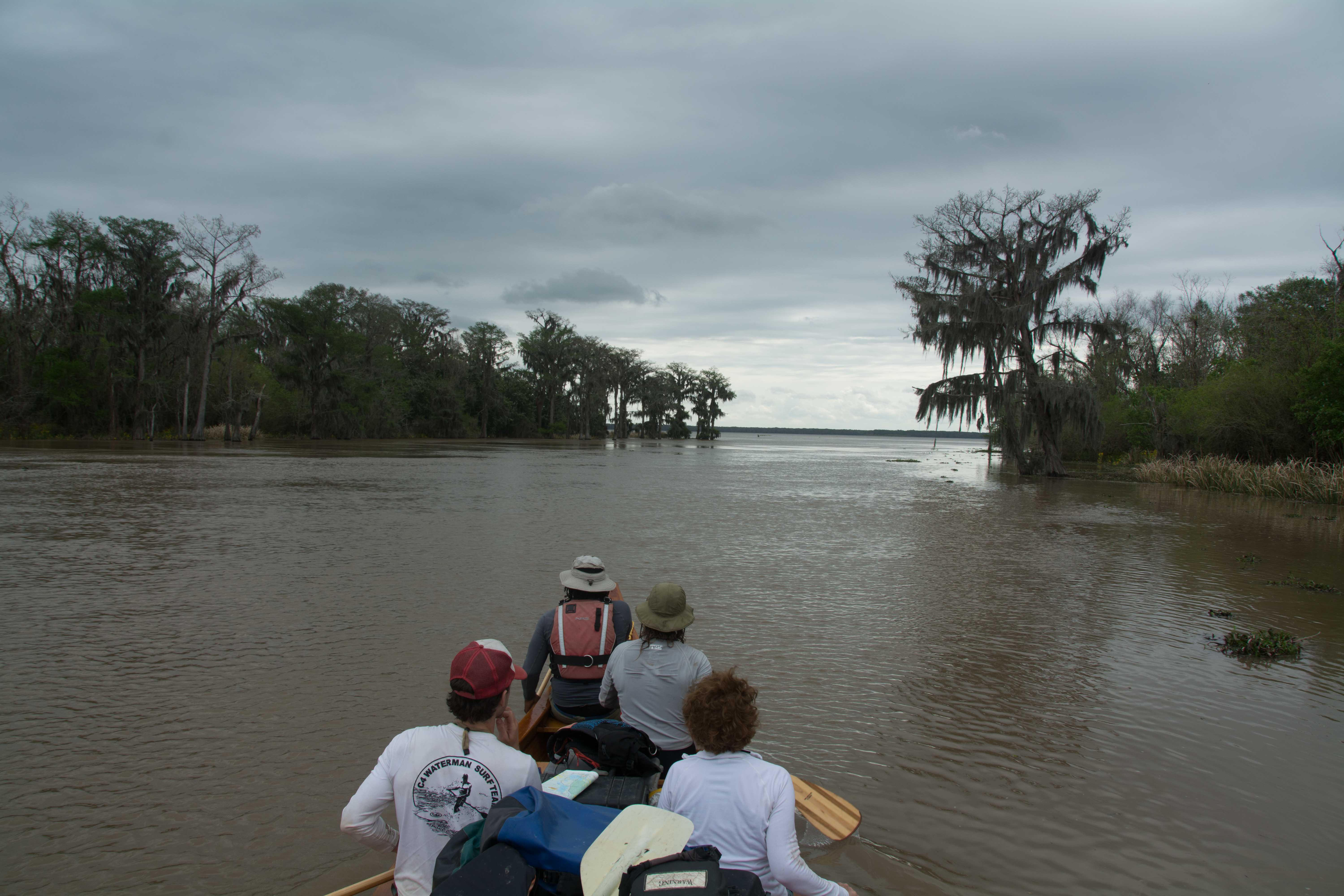 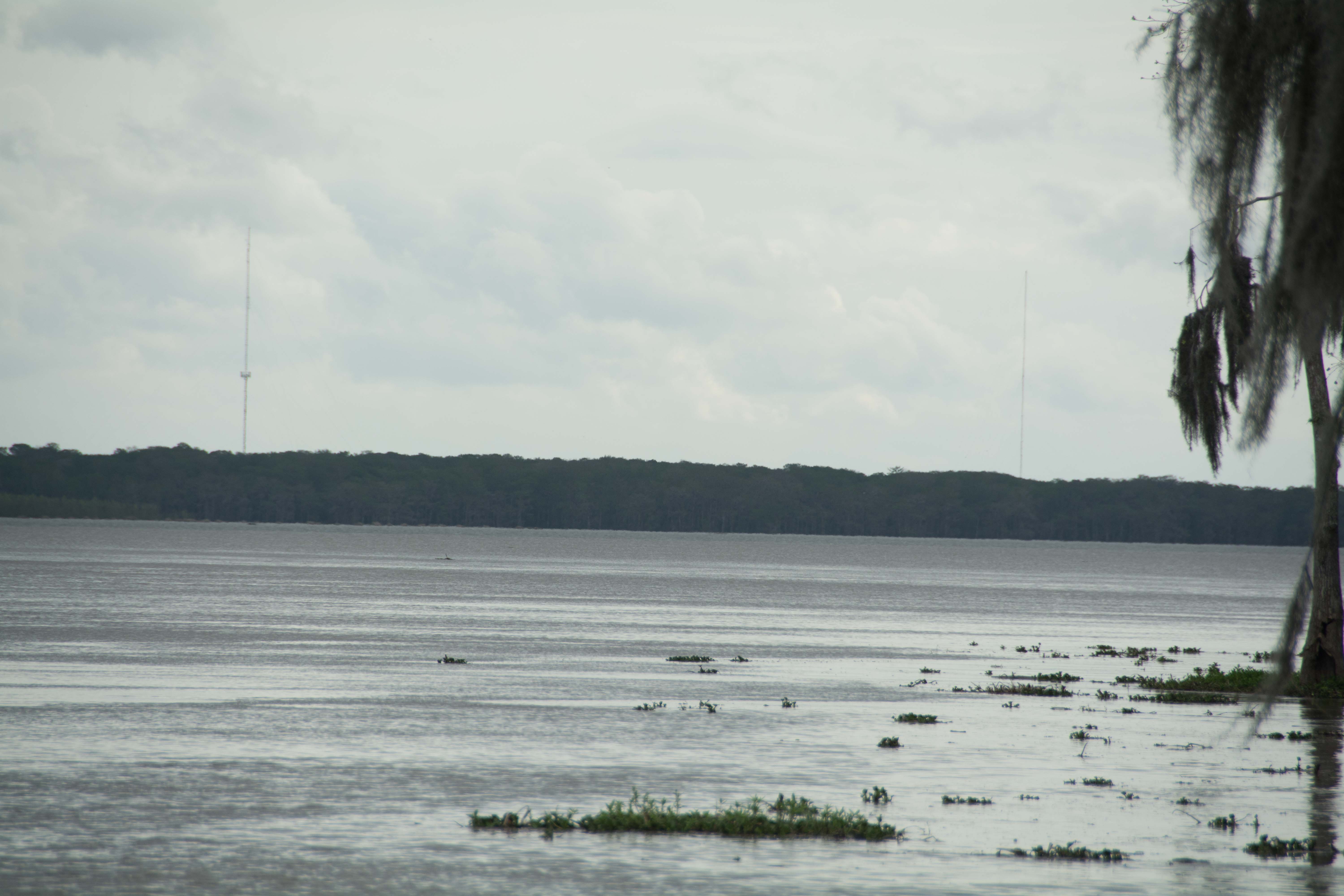 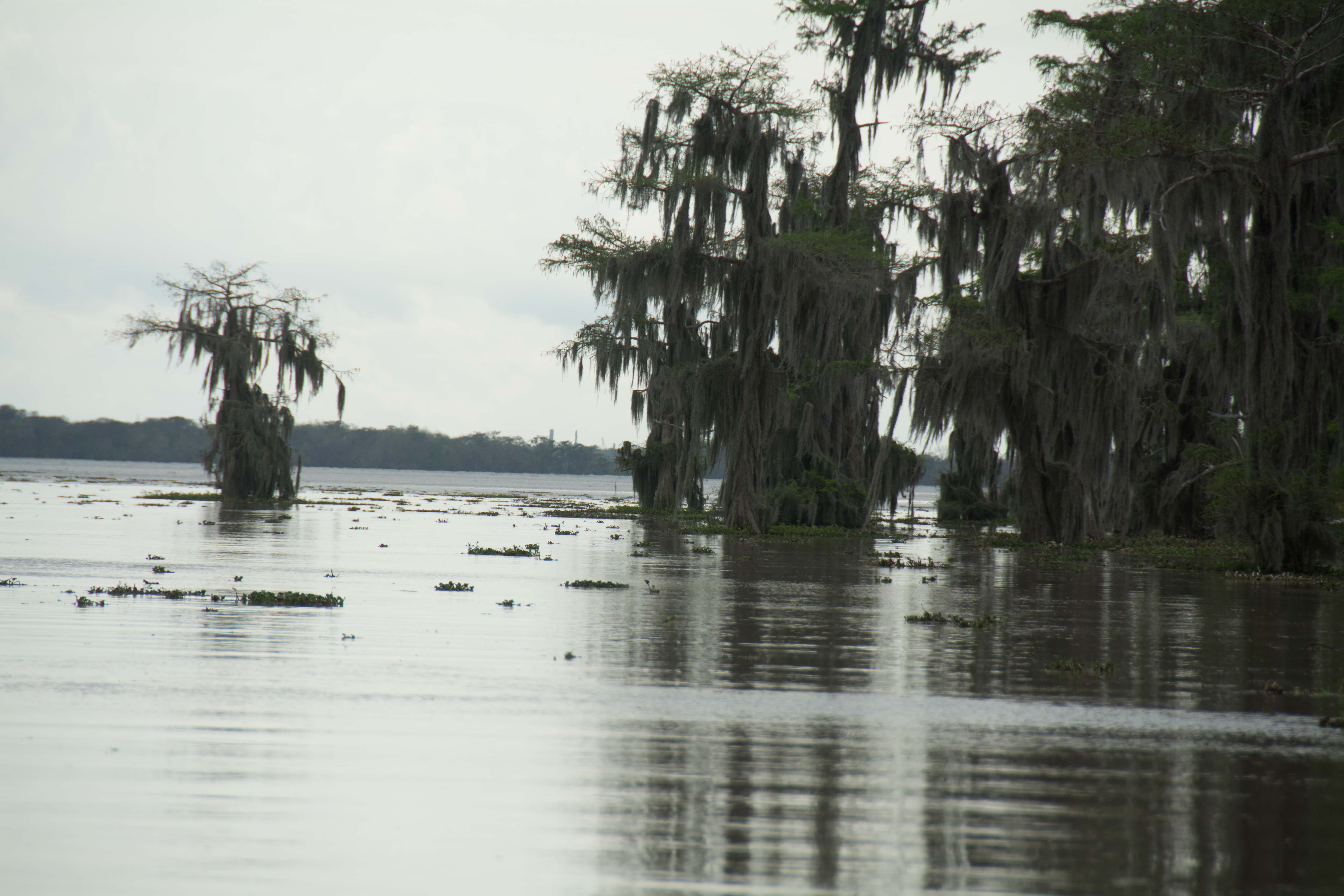 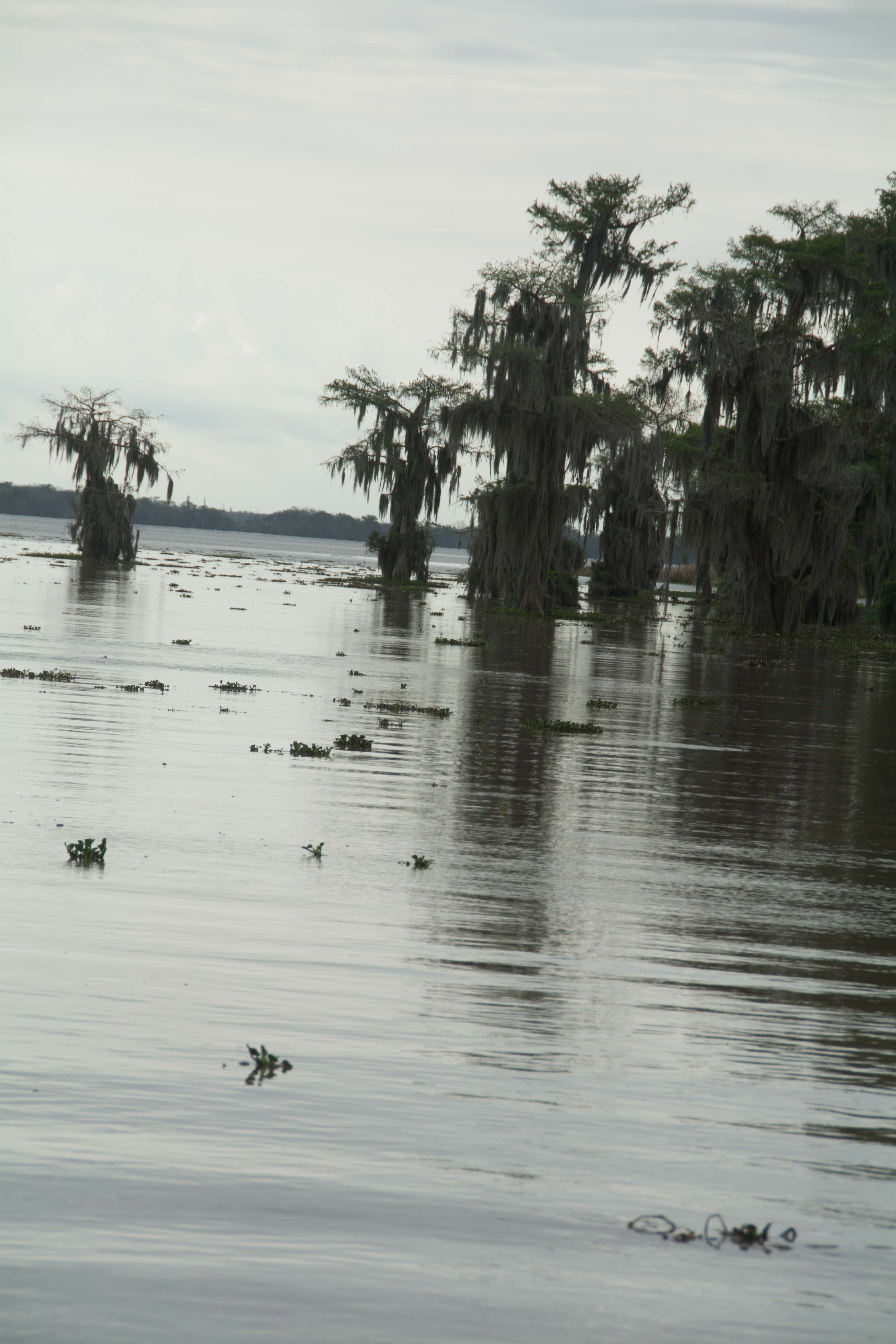 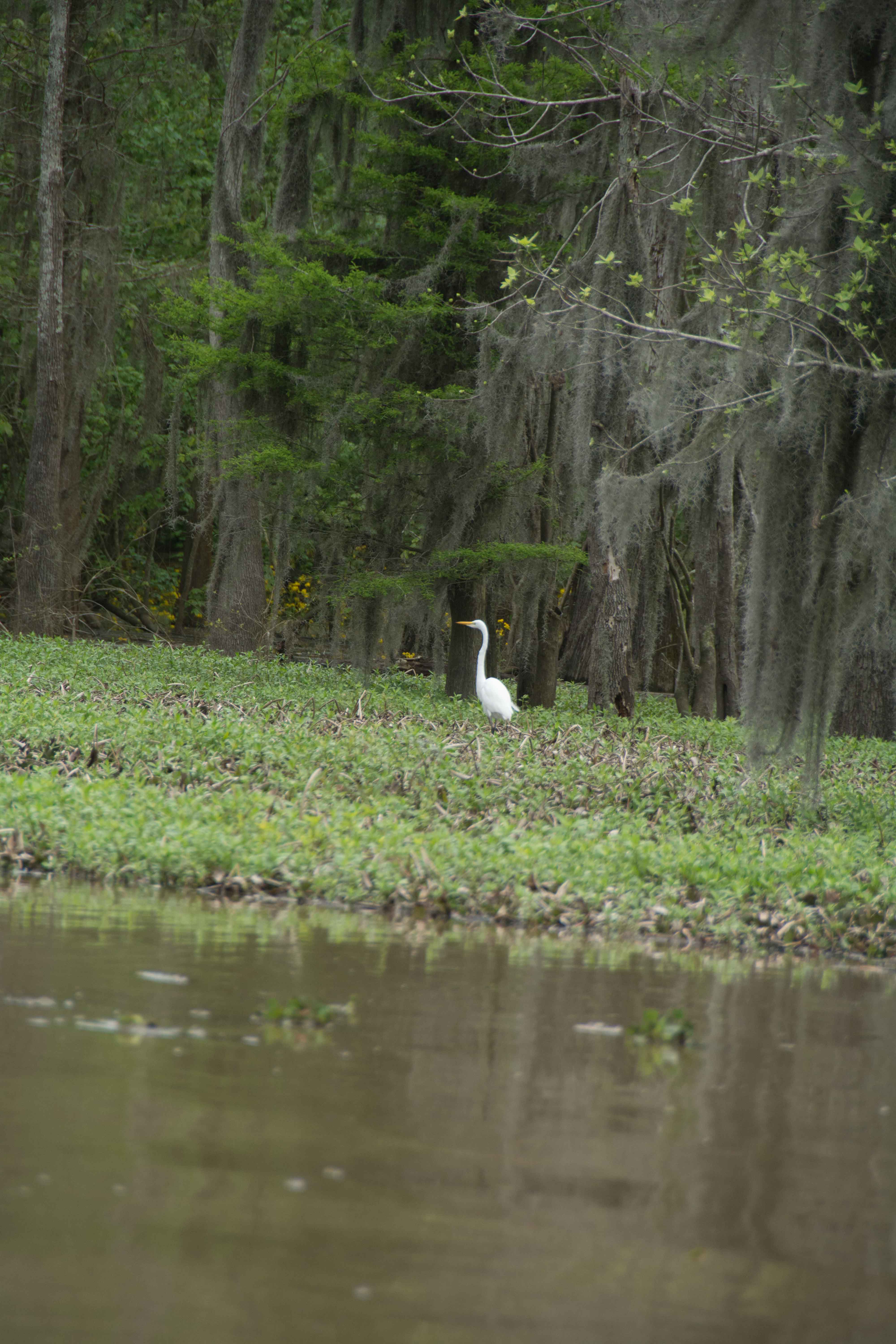 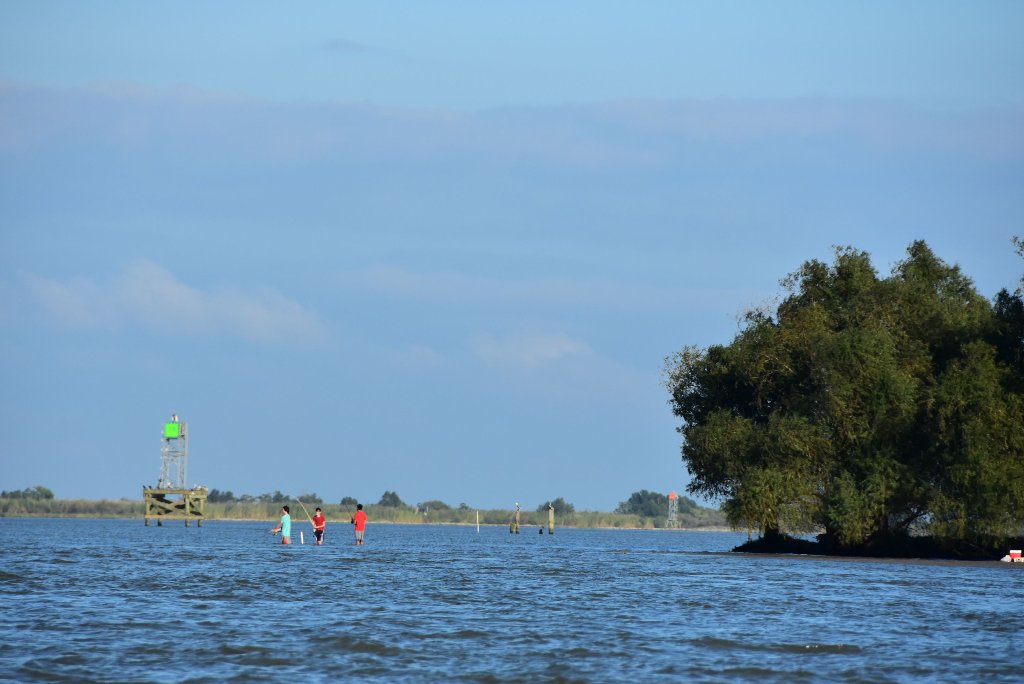 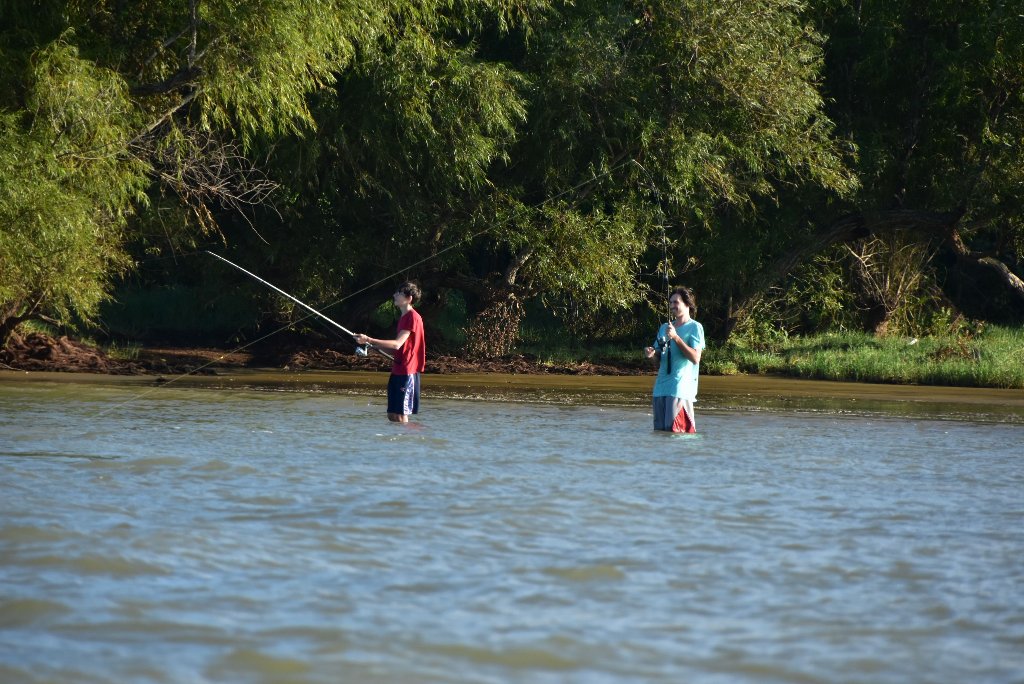 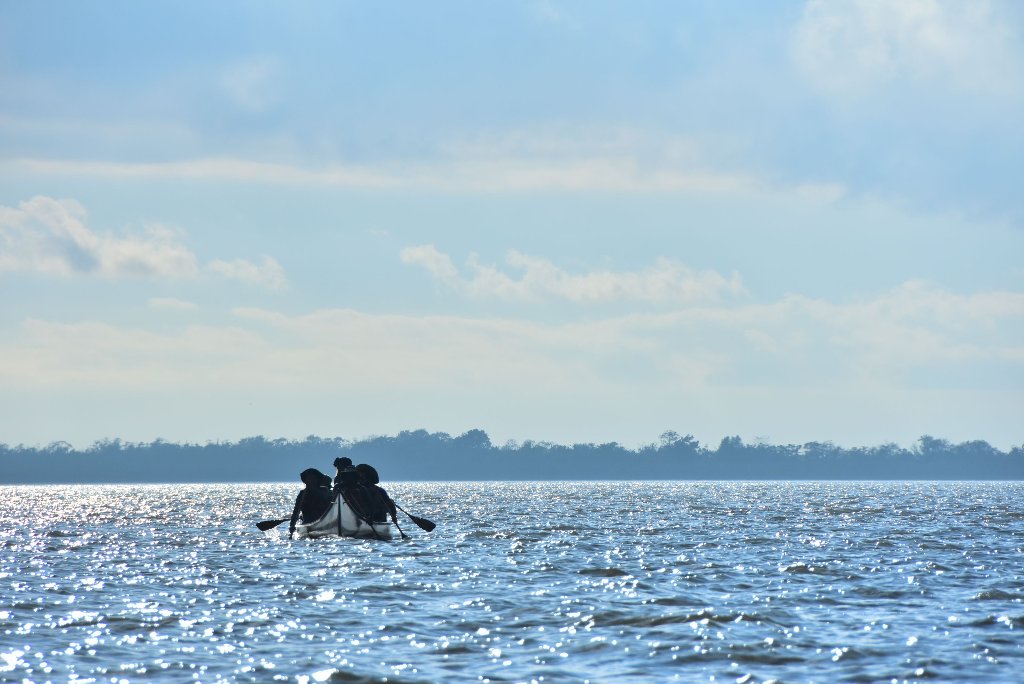 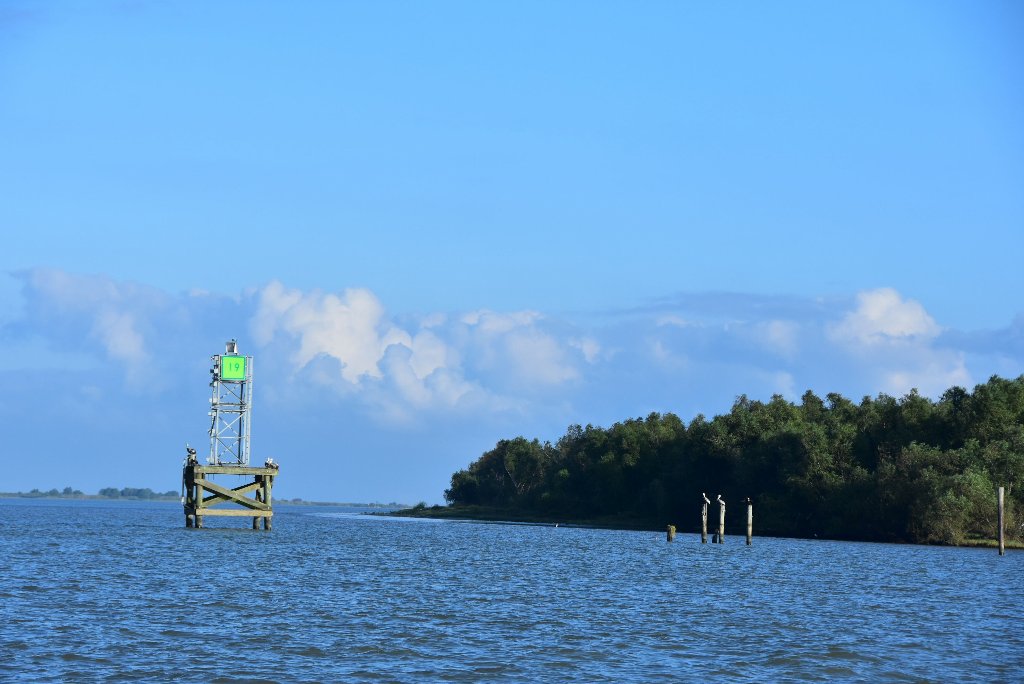 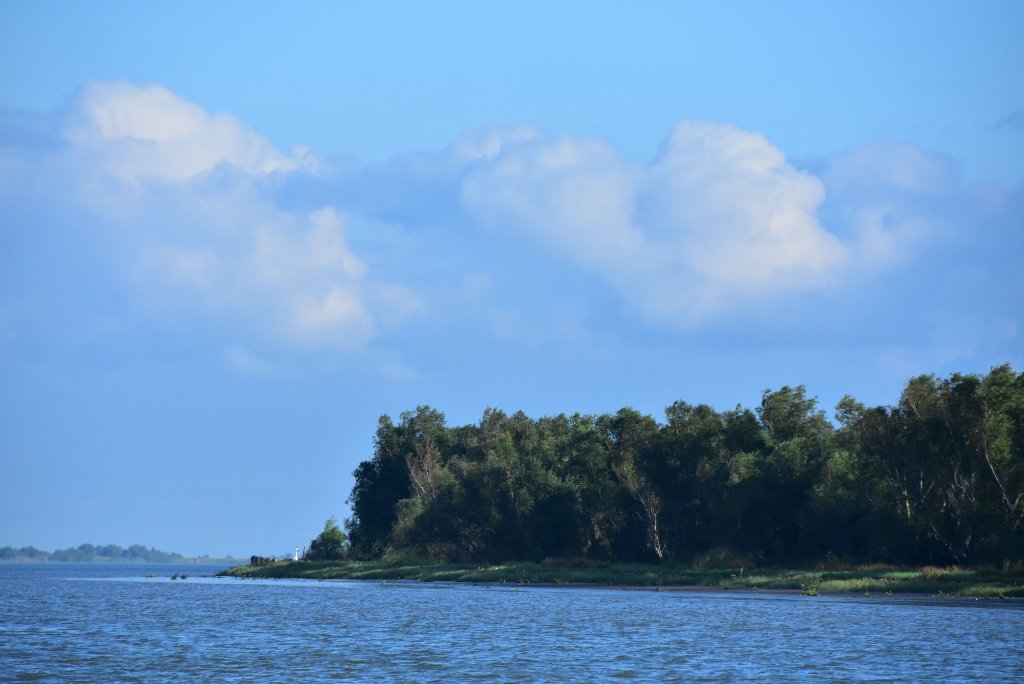 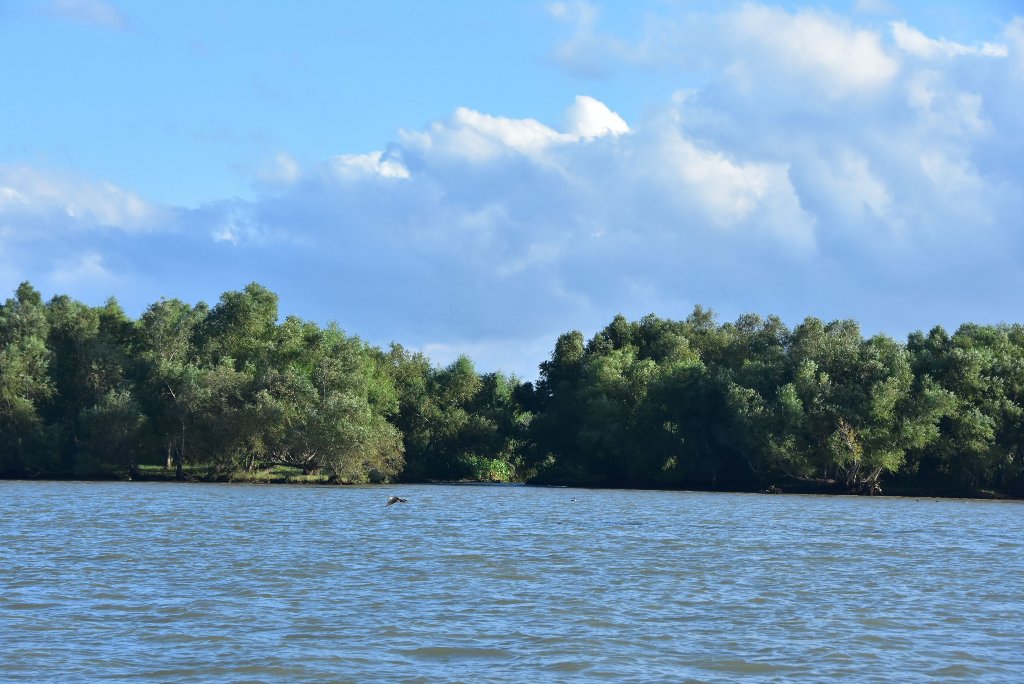 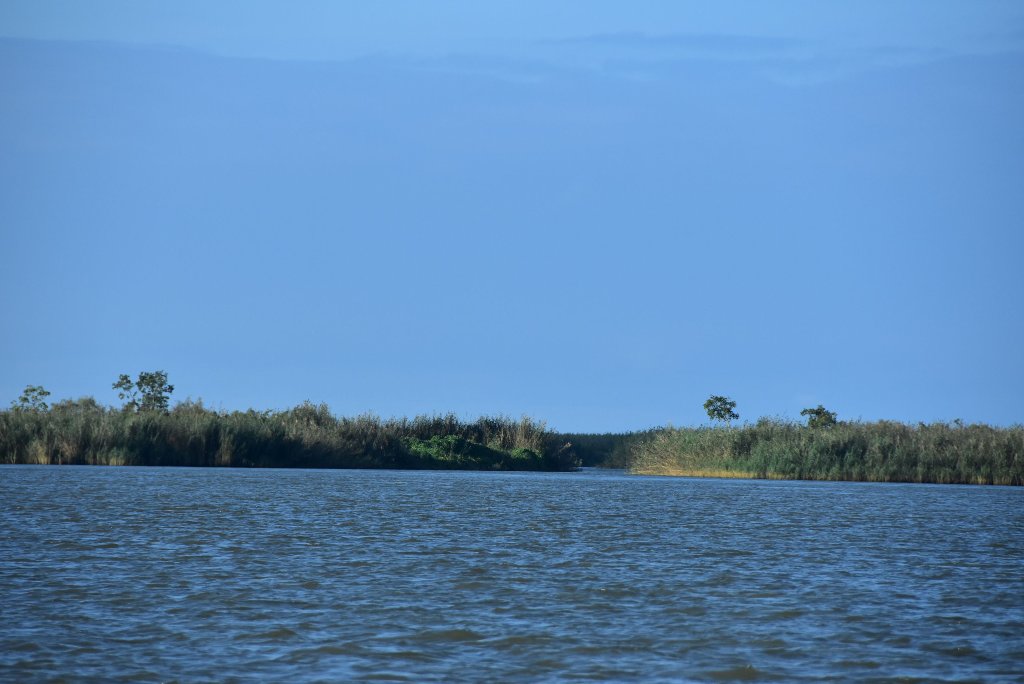 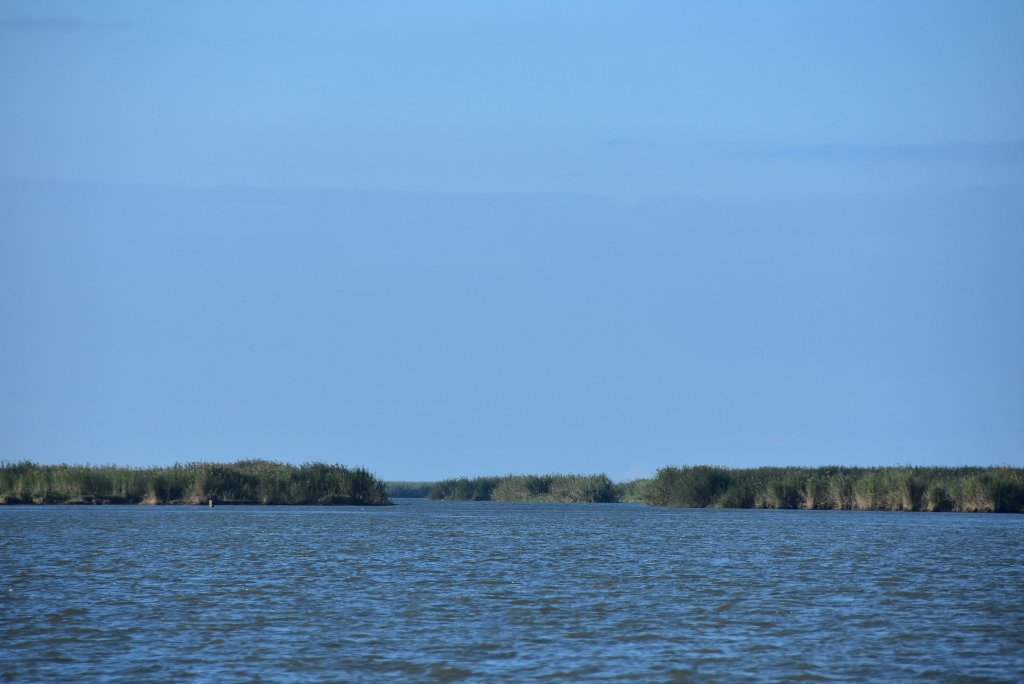 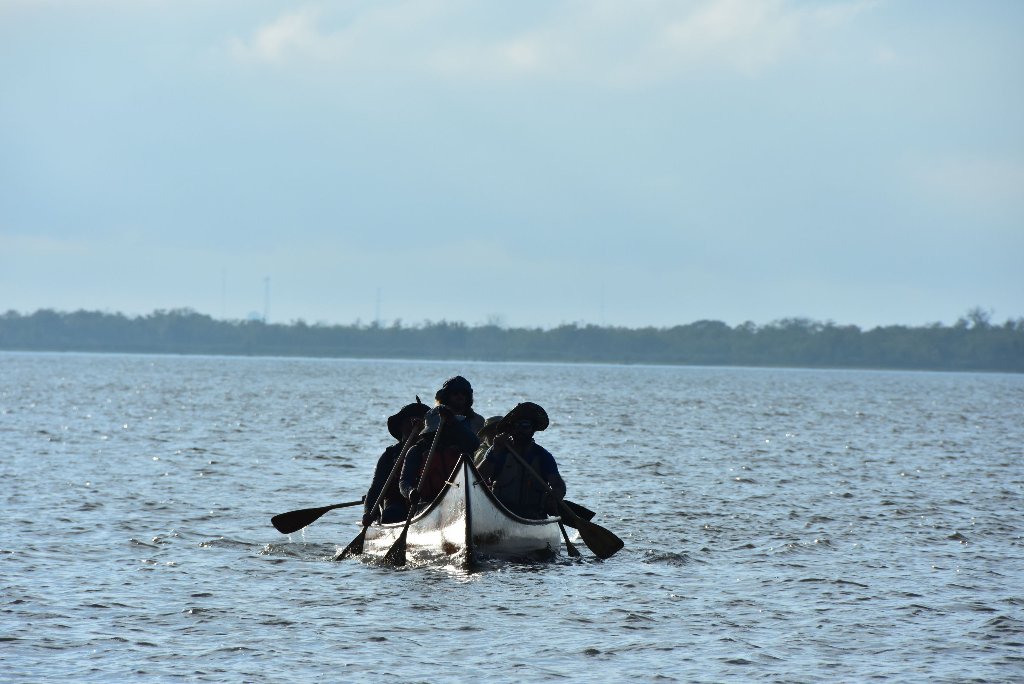 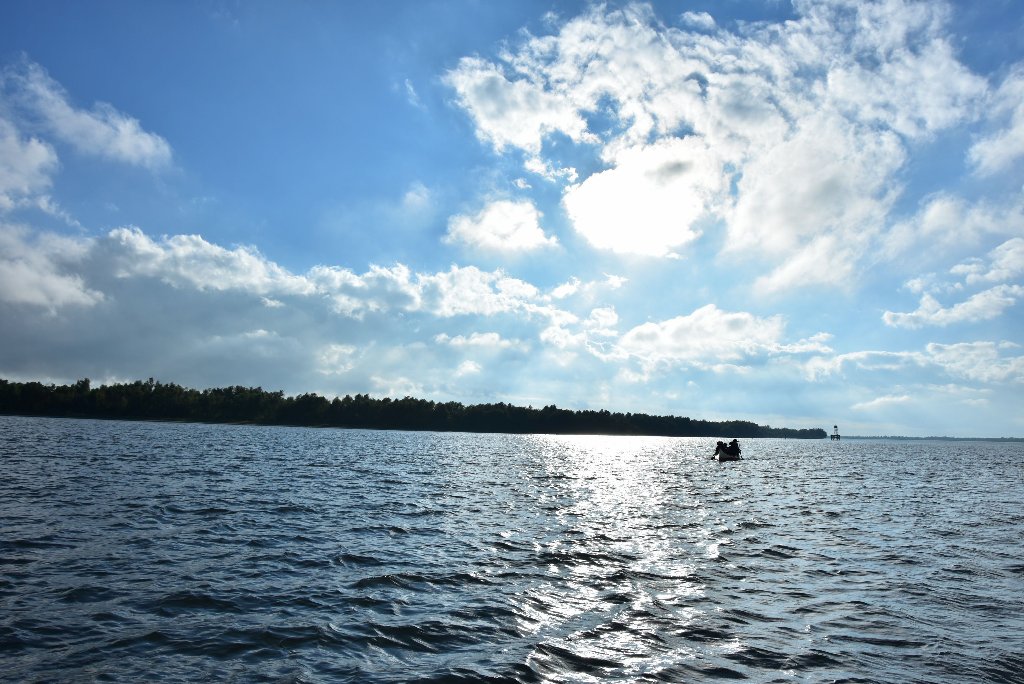