Entergy Louisiana’s Ninemile Point plant has been powering New Orleans and southeast Louisiana since the 1950s. The facility comprises five dual-fuel (primarily natural gas but can be run on fuel oil) boiler units, the oldest of which came online in 1951. The plant currently has just under 2,000 MW of generation capacity in operation. This is less than in the past because Units 1 and 2 have been retired, and Unit 3, commissioned in 1955, is nearing end-of-life. There are plans to add additional units.

It seems miraculous after you’ve seen what the river goes through below Baton Rouge in Chemical Corridor. But it is true: the Mississippi River quenches the thirst of New Orleans residents, as well as provides bath and wash water. We know we should all be careful about what we dump into the Mississippi River and its tributaries. 44% of America drains past this point coming into the The City of New Orleans. But all of the chemical plants upstream need to be even more careful!

Possible low/med picnicking/camping up to 10NO.

An unusual sandbar forms behind the Oak Street Water Intake, and continues downstream around the outside edge of Carrolton Bend, creating the scene for good picnicking and possible camping up top 8NO, and dry spots in the willow trees behind up to 10NO, and possibly up to 12NO in a few limited locations. Never leave your valuables out here. Always leave someone at camp to safeguard vessels and equipment. Lots of foot traffic in and out of this area.

We All Live Downstream

Voyageur, take an imaginary journey with me now that are coming into the city of New Orleans. Retrace your paddlestrokes right back to where you started, in Lake Itasca, or Three Forks, or the Wabash River, or St. Louis, or wherever. Now retrace your paddlestrokes downstream through all of those towns and cities, and all of the creeks, rivers, and waterways you have noticed coming in alongside. Now imagine everything you have seen dumped into the river upstream, from wastewater to oil refineries, from fertilizers to metallurgy. Now imagine everything washing down the tributaries upstream, all 13,000 of them, draining 44% of America, and washing away the wastes of 66 million people. Now imagine all of that water flowing down the Mississippi River, and into Carrolton Bend, and being pumped out here at the gates of the largest metropolis in the Deep South for tap water uses. This same water will be used to brew a cup of coffee and bathe a one-year old baby. It will added to the makings of gumbo, jambalaya, and mint juleps. If you have ever wondered who lives downstream, now you know! This is the ultimate example of “we all live downstream…” The thing that paddlers know that not many others ever see or think about is that “we all live downstream” wherever we’re at along the line. And so we paddlers have a special knowledge that we could share with our friends and family, and all others we come into contact with. And that is: don’t dump it down the stormwater drainpipes. Use and dispose of responsibly. Whether it’s an oil change, or old paint, or old gasoline, or whatever. Don’t dump it down the drain. Don’t flush it down the toilet. Recycle whenever possible, and dispose of properly when not. All 66 million people living downstream will live happier and healthier lives because of your thoughtfulness!

Paddlers watch carefully for freighter traffic as you come around Nine-Mile Point, a particularly tight bend of the river. There is a possible campsite created in a small shelf of sand that seems to get regenerated year after year in a notable location next to the New Orleans Water Intake, just below the “Batture Houses” — along the outside edge of Carrolton Bend. (Easy walk over the levee to The Maple Leaf Bar: 8316 Oak Street, live music most (usually all seven) days of the week).

The neighborhood of Gert Town is located in Mid City New Orleans near Xavier University, the only historically Black, Catholic University in the United States. Just blocks from the university and within this residential neighborhood was the Thompson-Hayward chemical plant. From 1941 to the 1970’s the plant mixed a variety of liquid and powdered insecticides and herbicides in large outdoor vats, including Aldrin, Dieldrin, Chlordane, DDT, and the herbicide 2,4,5,-T (one of the 2 constituents of Agent Orange). In the 1980’s the site was used by Harcros Chemicals to store dry-cleaning chemicals and pesticides. Spills of chemicals and dumping of chemicals into storm drains were common. The facility was shut down in 1988 and some remediation was conducted. Large amounts of toxic material remained and an additional clean up was performed by the US EPA from 2006 – 2007. (Paul Orr)

Cargill Westwego is one of the last giant grain transfer conglomerates on the Lower Miss, and is a monstrous operation involving endless lines of barges bringing the grains in from the heartland and endless lines of freighters carrying those same grains outwards to the world market. The conveyor belts, elevators, cranes and other apparatus of Cargill Westwego creates a kaleidoscope of colors, lines and angles, often covered in flowing clouds of soybean, corn or wheat dust. This Cargill grain terminal features 4 loading spouts in lower berth section, 2 load spouts in upper berth section, and a 4,300,000 bushel capacity.

Smaller Tows from Here on Downstream

Below Kenner the size of the Mississippi River tows gets smaller and smaller as they discharge their loads, get fleeted, new tows made, and barges recombined for return journey upstream. There are some exceptions, of course, (Cargill Westwego Grainery) but by and large you have now paddled past the big graineries and ditto for most of the power plants. ADM/Growmark Ama is one of the last giant grain transfer conglomerates on the Lower Miss. Hence, the sprawling tows of 24, 35, or 42 barges, or more, ferrying grain or coal, that you have learned to paddle around on the Lower Miss, are seldom seen below Kenner.

Paddlers beware: this does not mean the river is any safer or easier to navigate! There will be less big tows, but guess what? You will also now be sharing the river with more and more freighters! Their speed limit increases as result. They will be moving slightly faster than they did upstream, and making bigger waves, and pushing a bigger water displacement. And the freighters will be joined by the gargantuan container ships. (And below the French Quarter in New Orleans, some skyscraper-sized cruise ships). You will also paddle alongside more and more tows with smaller barge combinations, from 1 to 6 barges. Most will be ferrying petrochemicals to and fro, and making side trips up and down the various access canals to the Intracoastal Waterway, and from there running to industrial locations east and west along the Texas/Louisiana/Mississippi/Alabama/Florida coastline of the northern Gulf of Mexico.

There is a wide boat ramp built and maintained by the USACE here, which is in much better shape than any other boat ramp below Baton Rouge. It is a revetment ramp, laid out over the rip rap on a perpendicular, dropping directly from the riverbank into the flow of the river. Unfortunately it is not available to public (or commercial) interests. To date there is no public boat ramp on the main channel Mississippi within 35 miles upstream and 20 miles downstream of downtown New Orleans.

As you paddle past Carrolton Bend you might notice a big blocky building over the East Bank near 102.7 LBD, with a tall, 3-story rounded entry, and mirror glass windows all around. This is the New Orleans Headquarters of the U.S. Army Corps of Engineers. The New Orleans District covers the Lower Mississippi River including the all of the Atchafalaya project, the Old River Lock & Dam, the Morganza Floodway, the Bonnet Carre Spillway, and the MRGO Canal. Until 2014 you could purchase Navigation Maps for the Lower Mississippi River at this building. But the USACE has stopped publication. These maps are available online free-of-charge (Go to Rivergator homepage for link). Print up your own copy on waterproof paper. Or use regular paper and slip into plastic page protectors and place in 3-ring notebook. 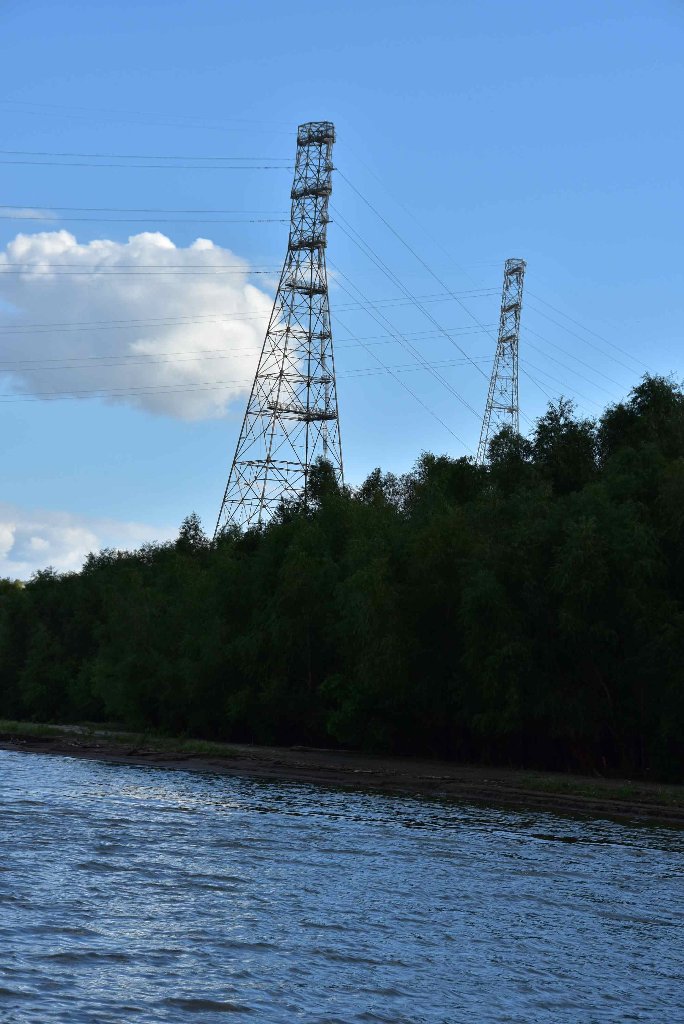 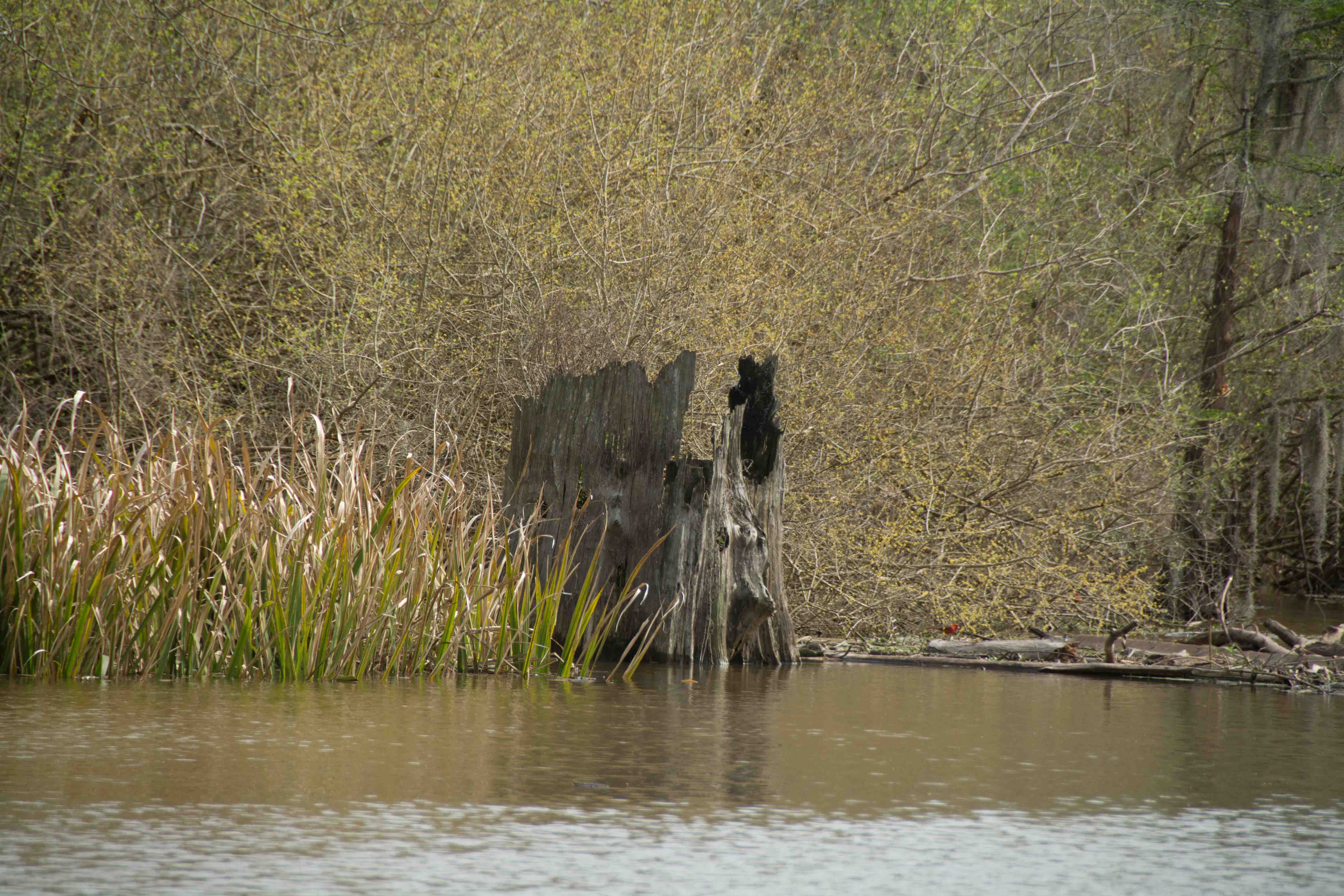 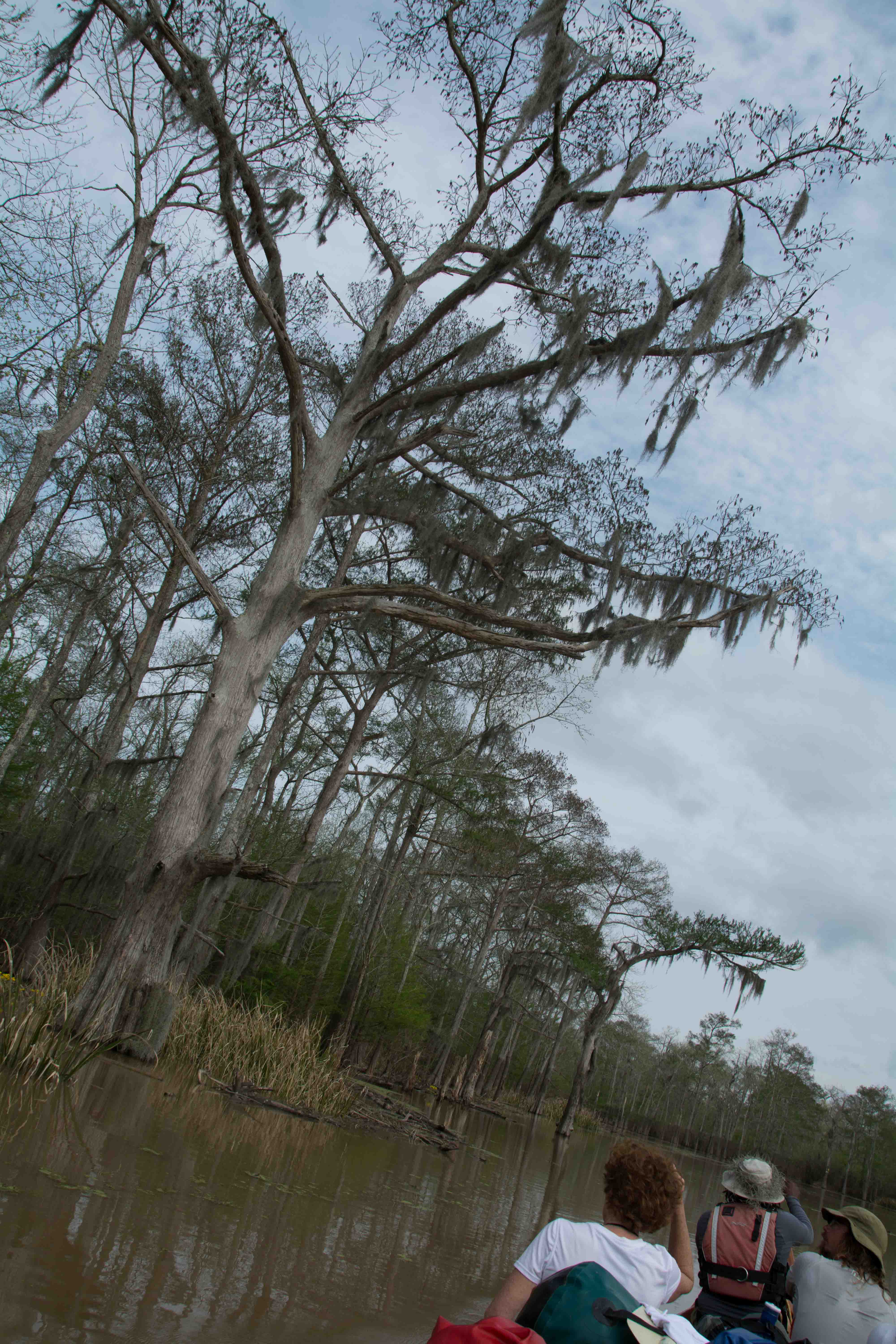 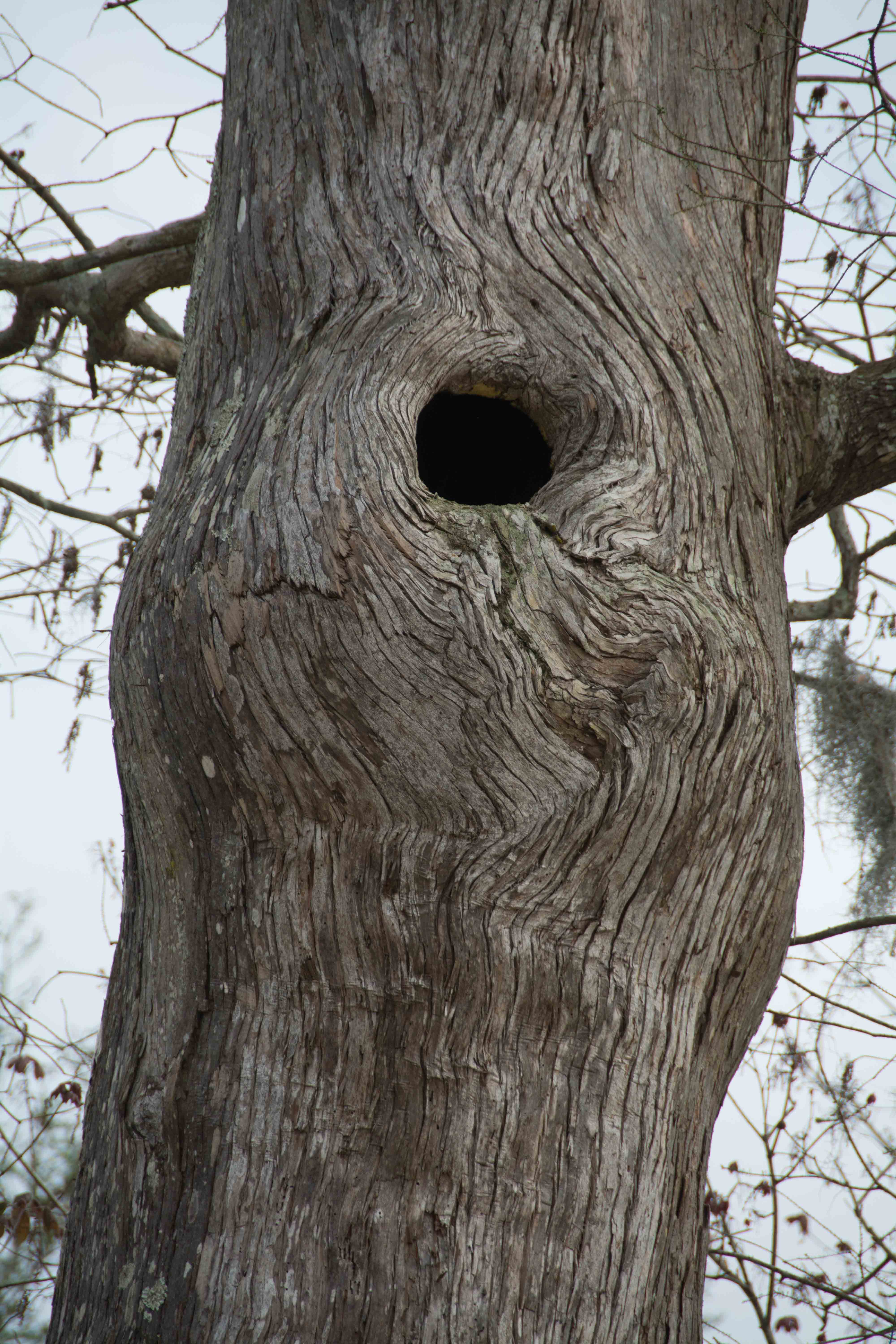 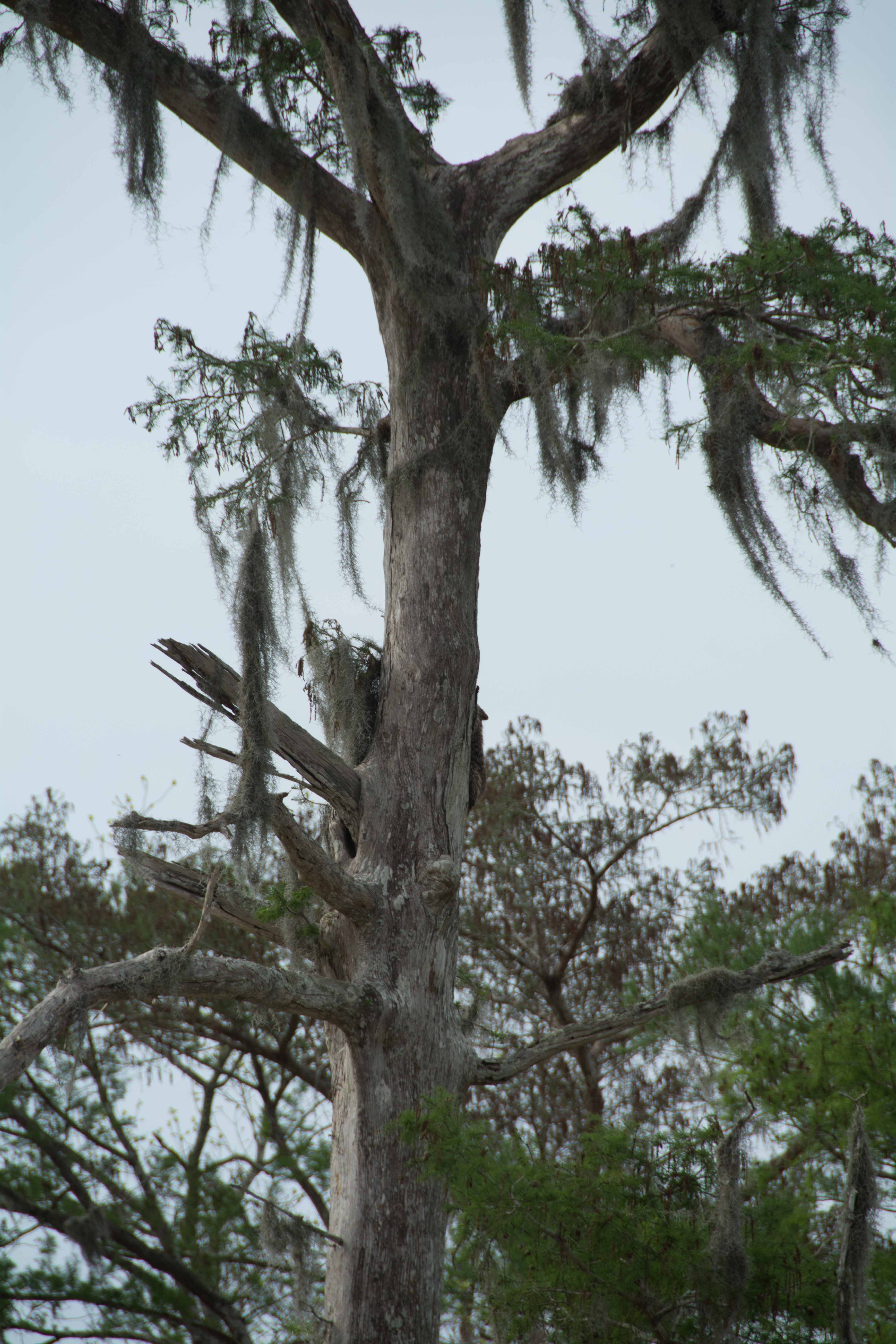 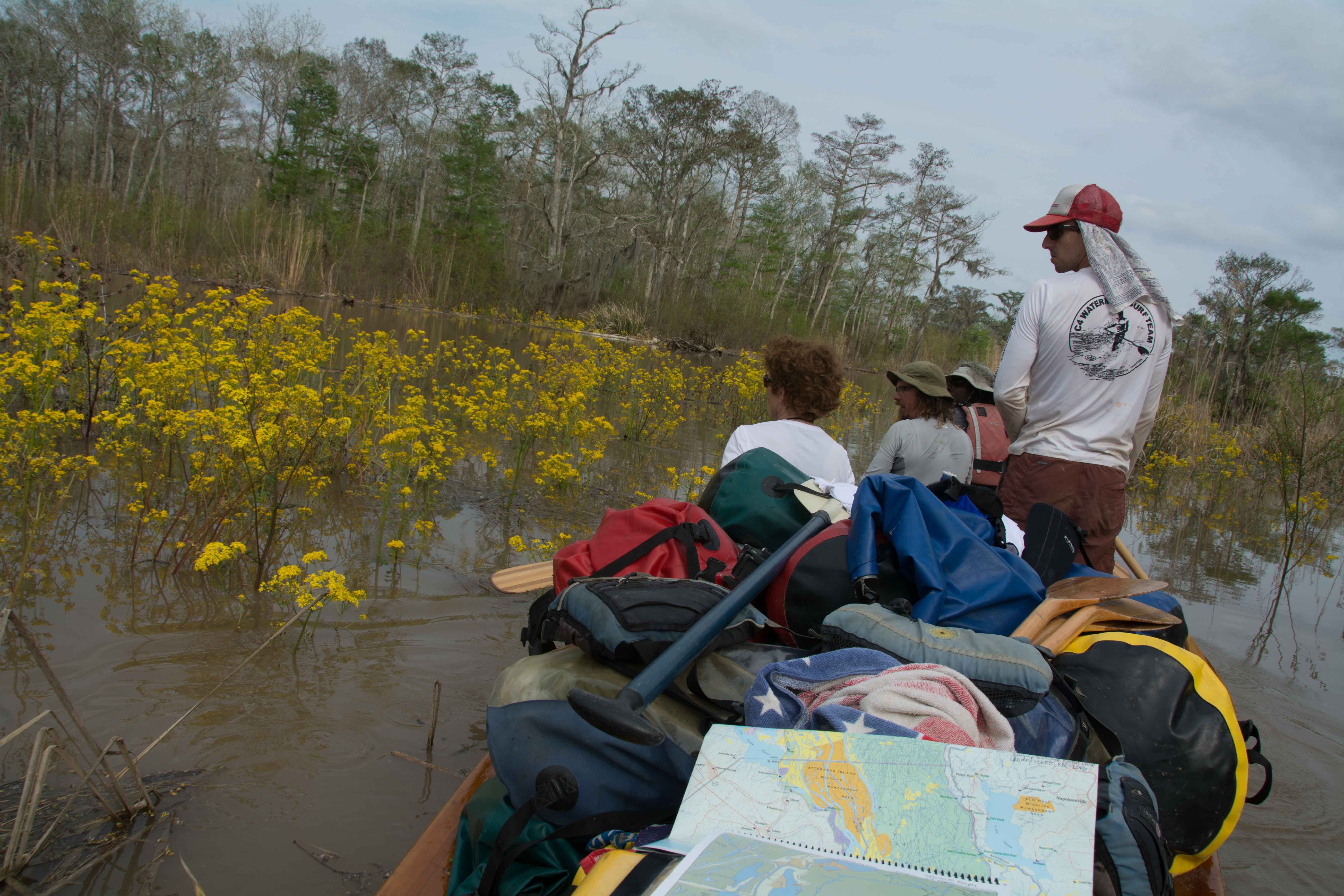 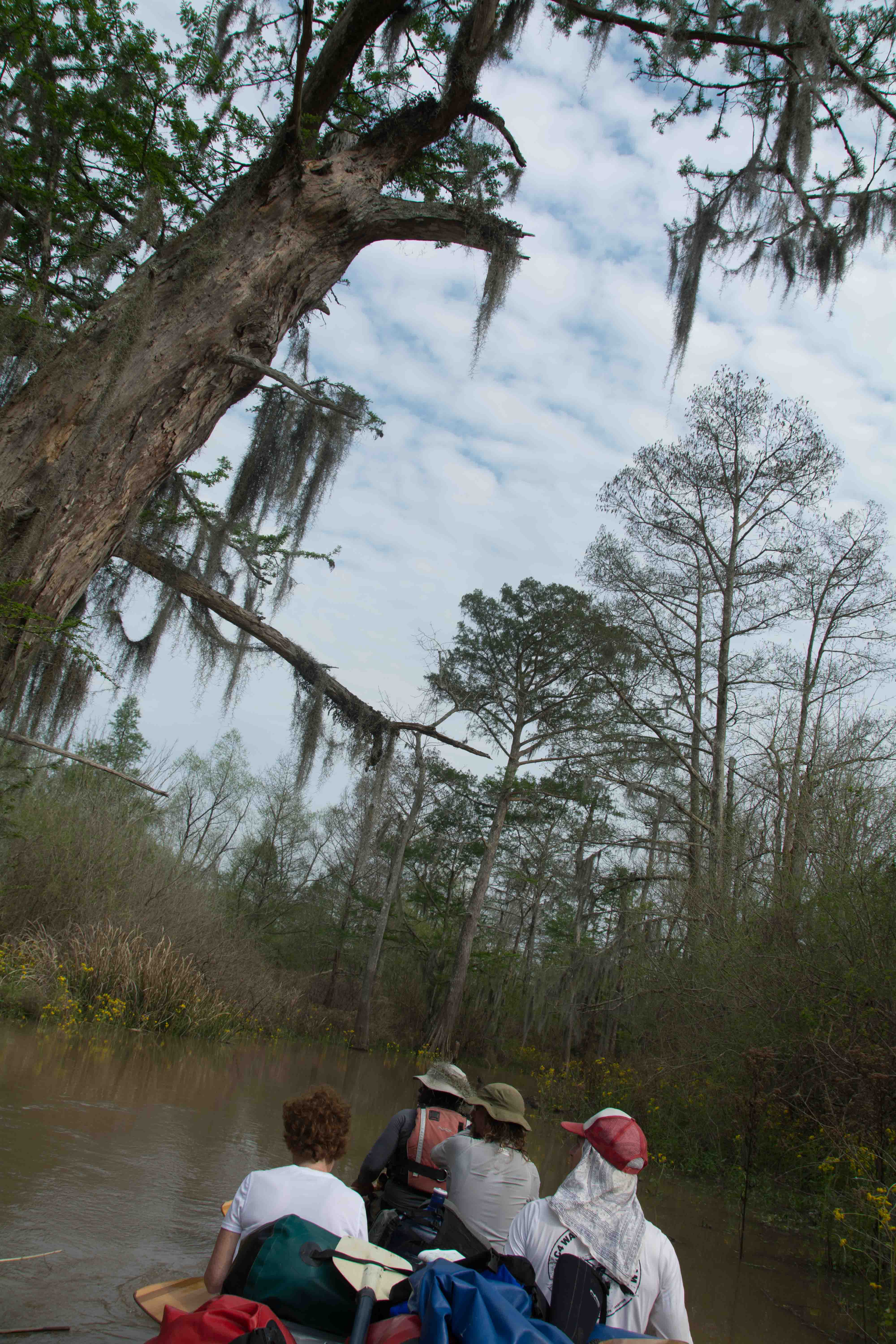 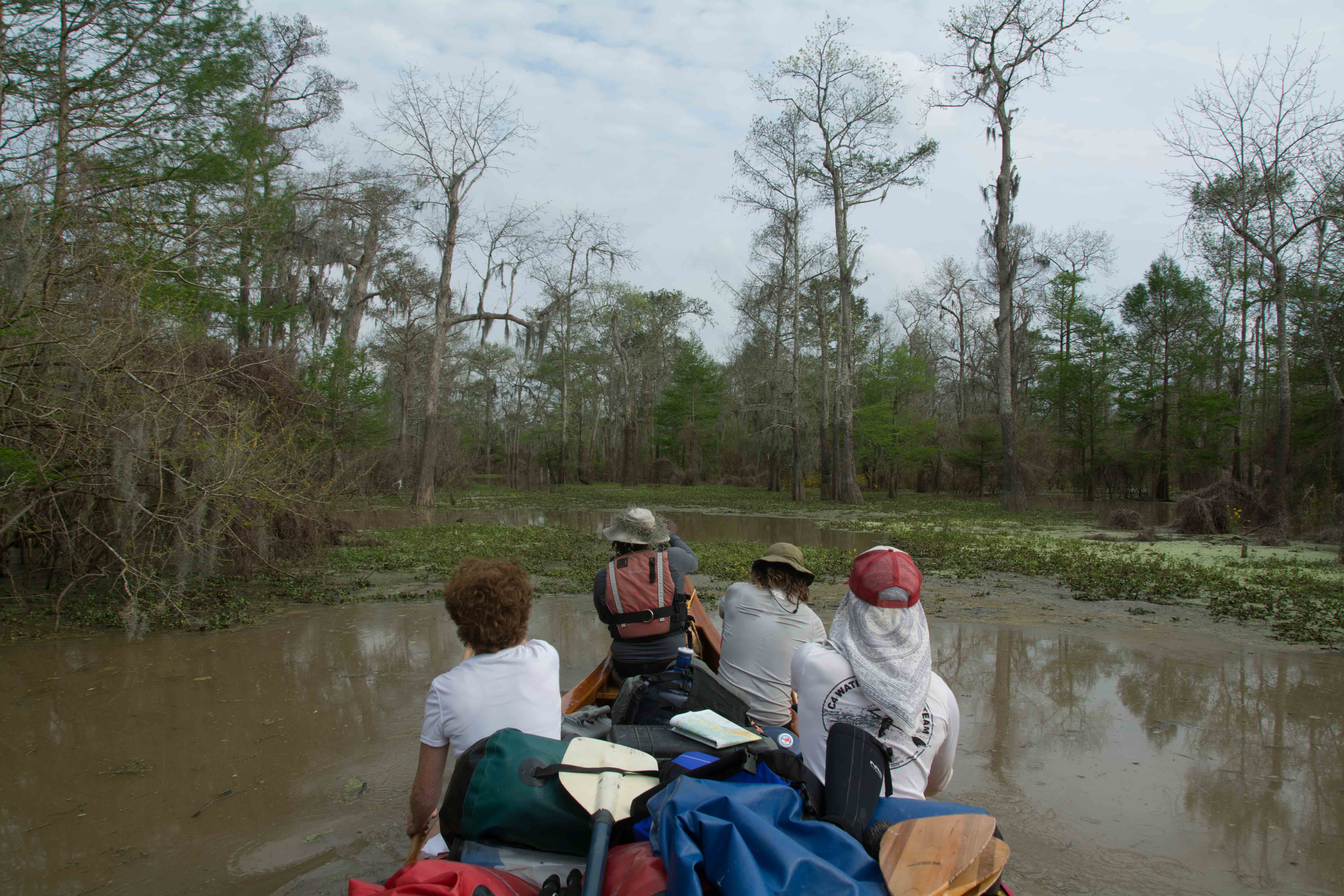 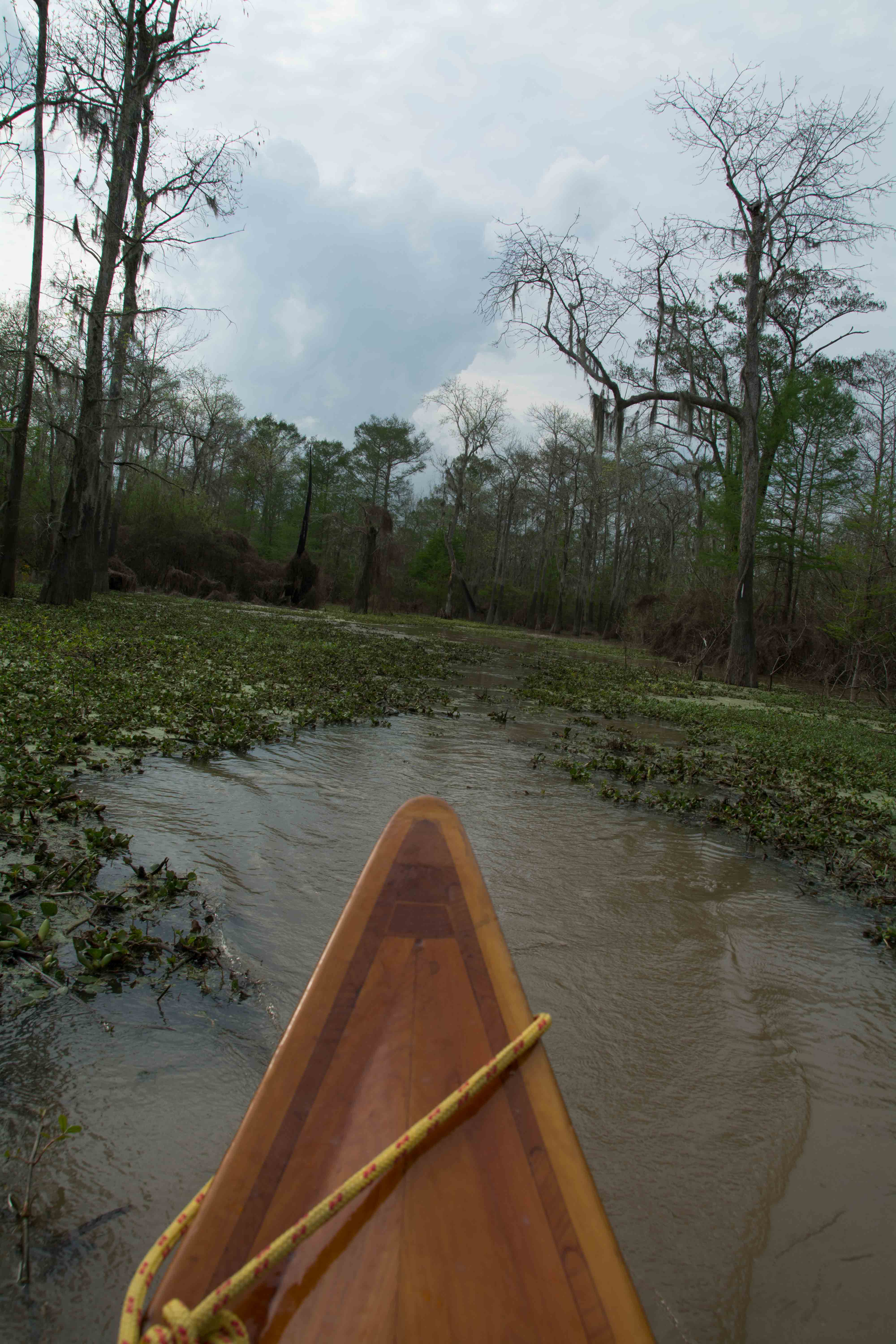 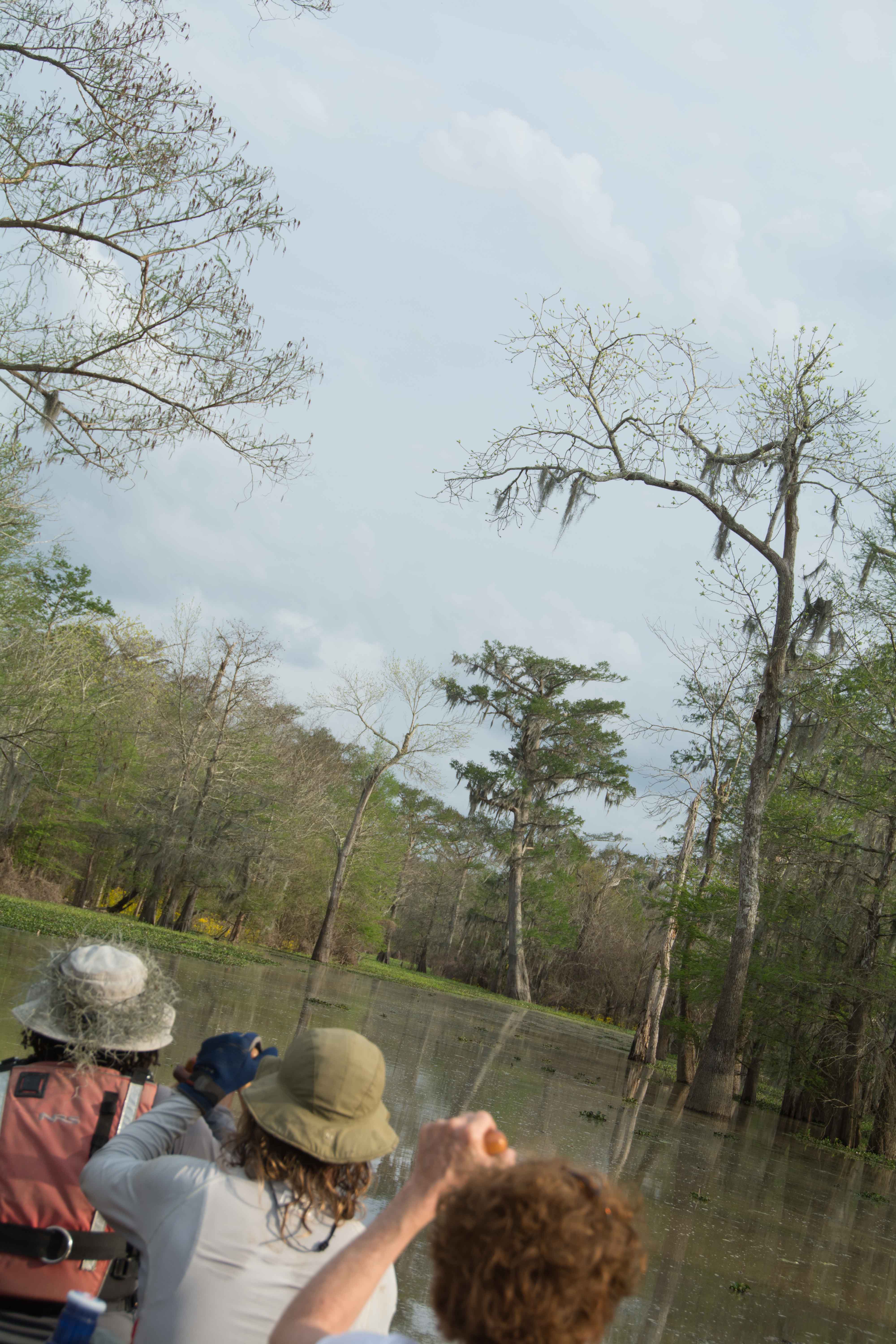 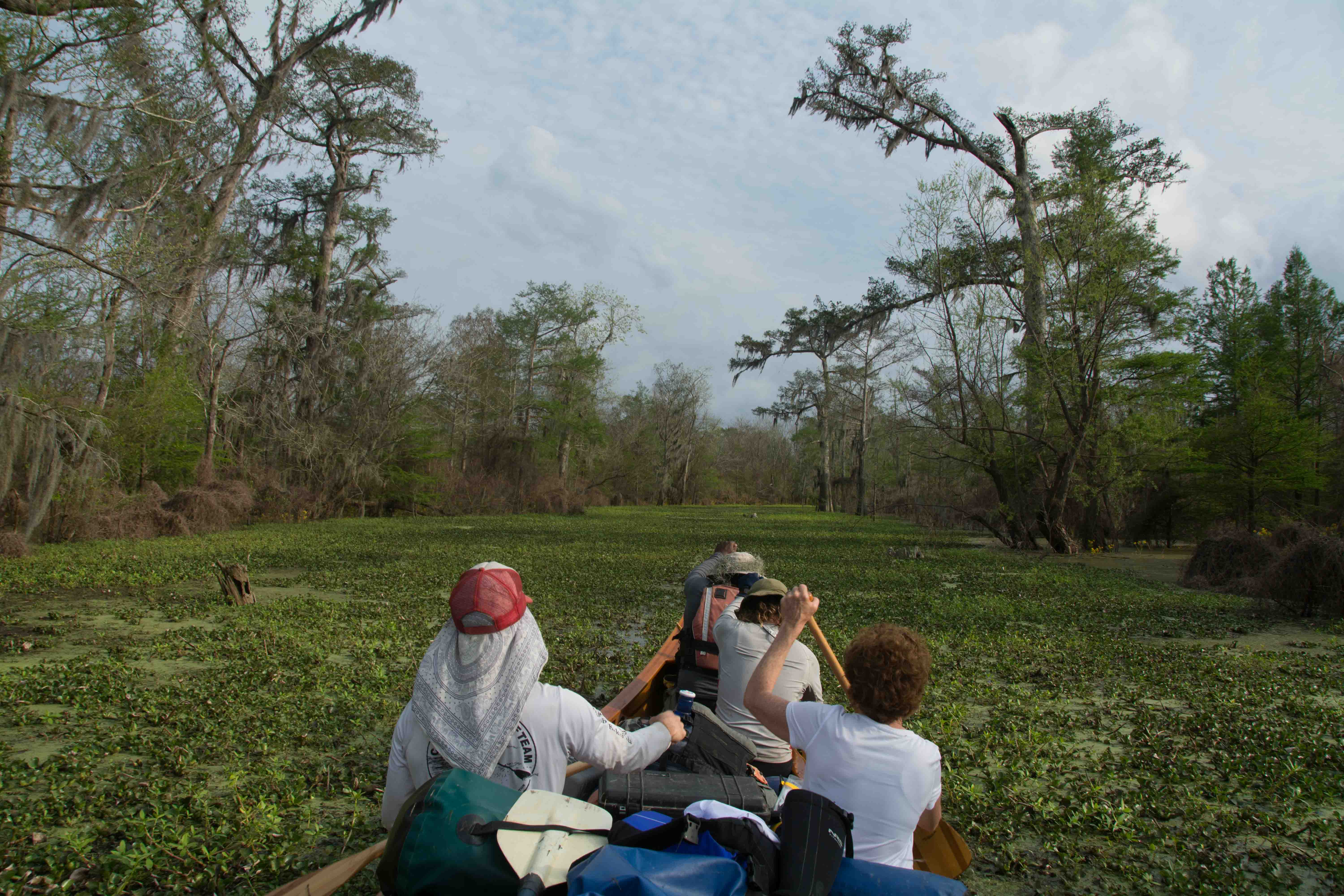 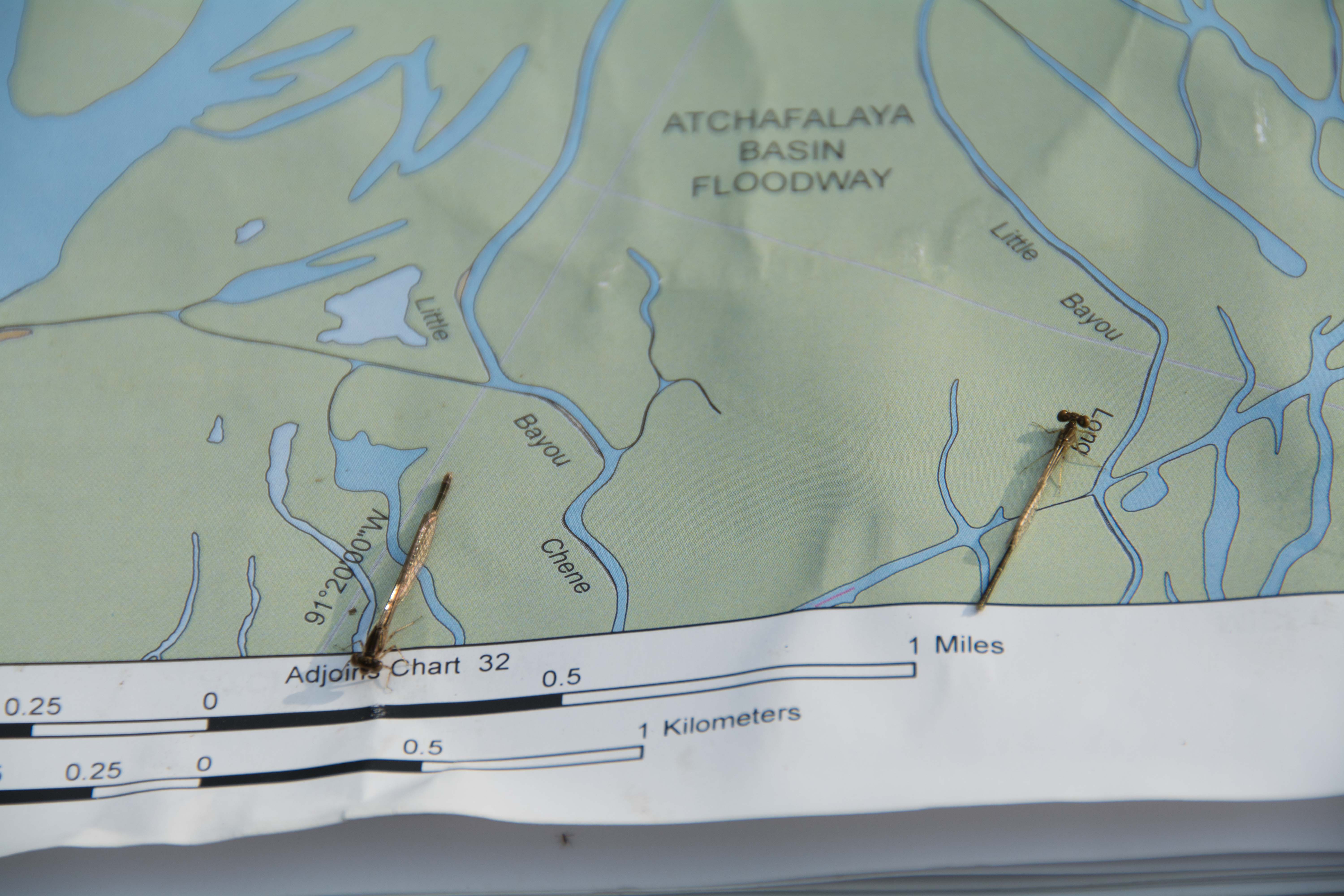 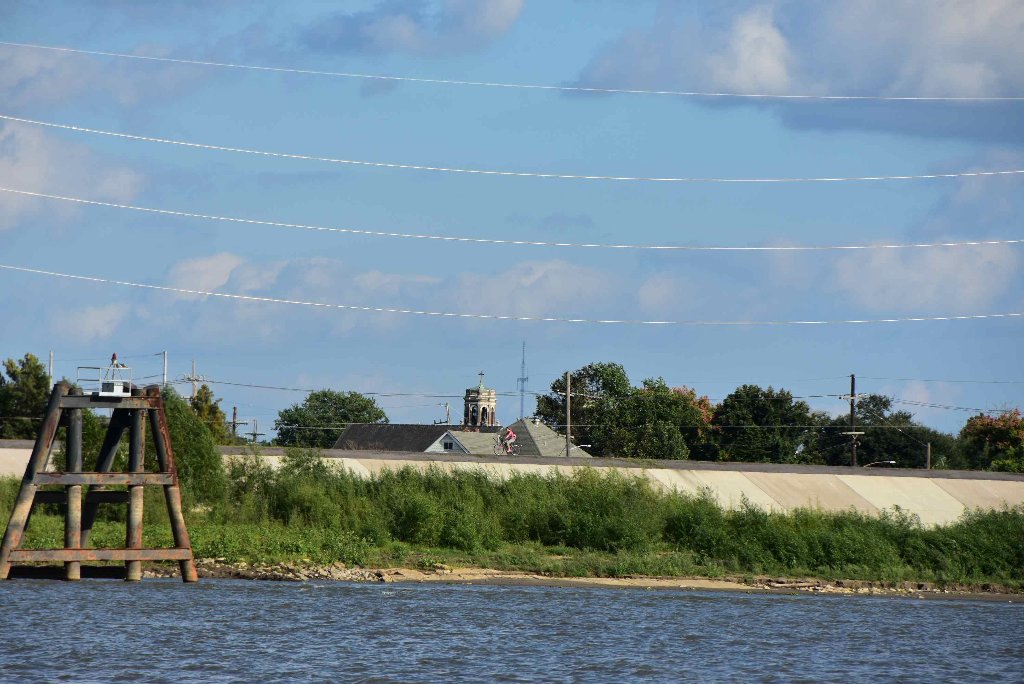 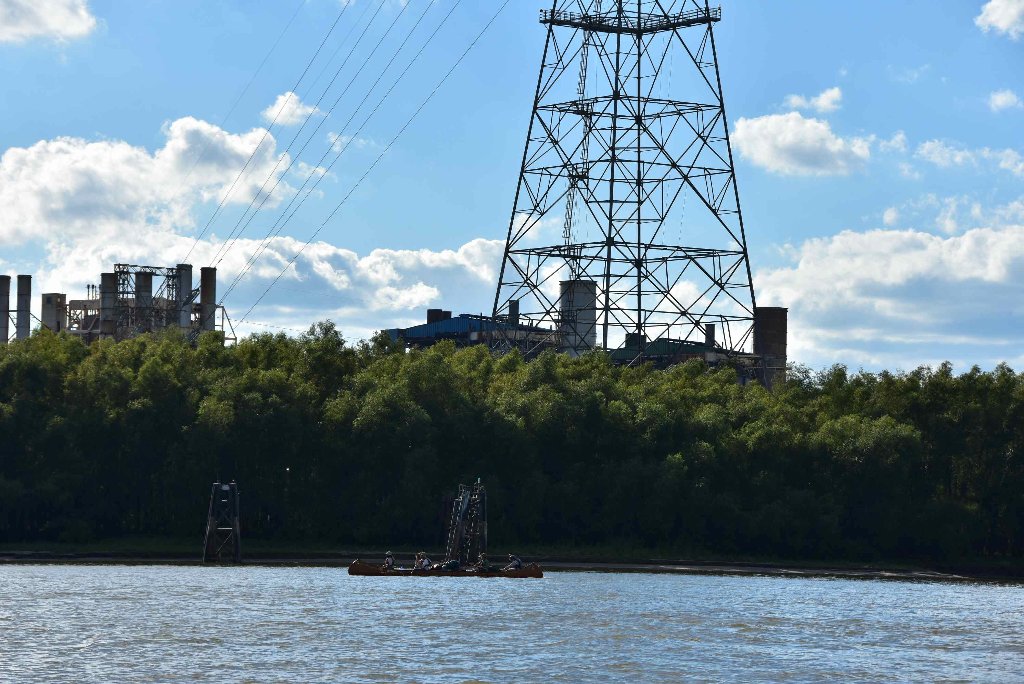 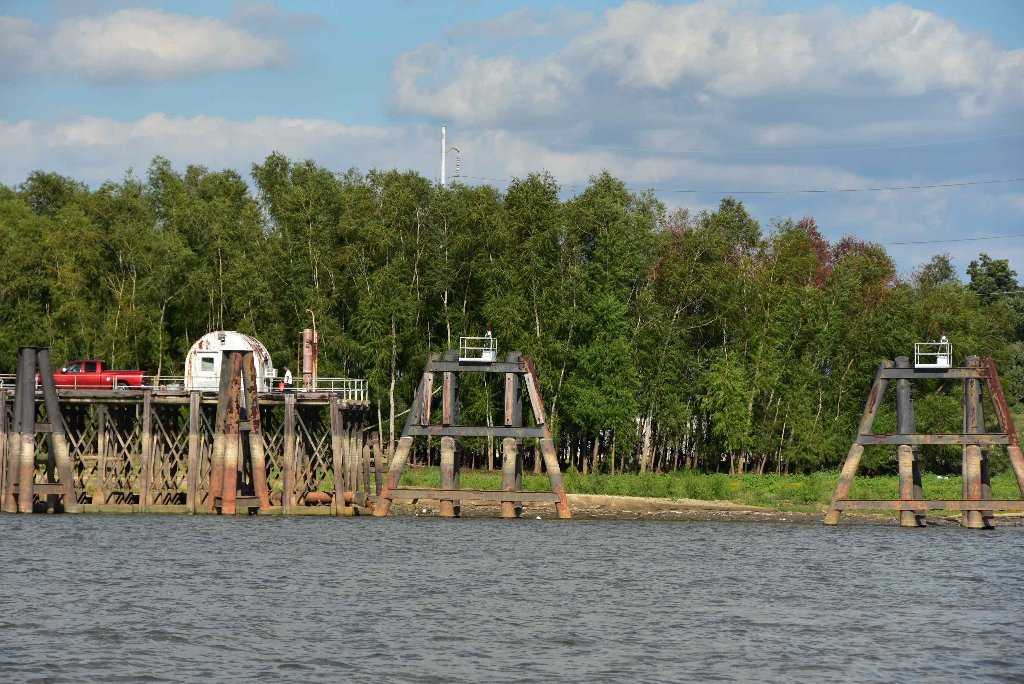 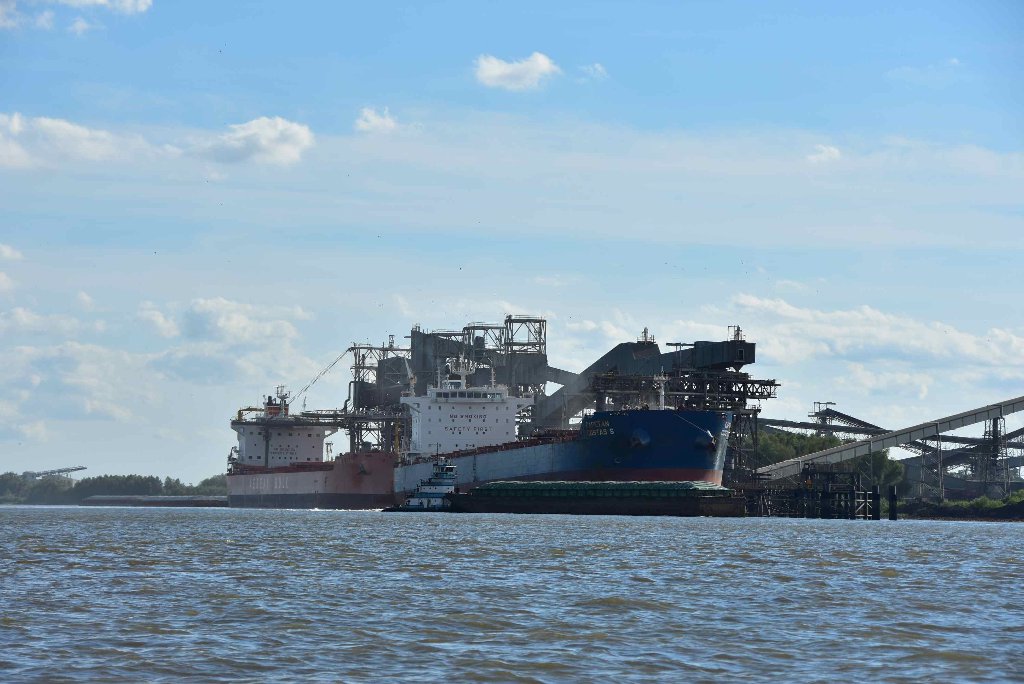 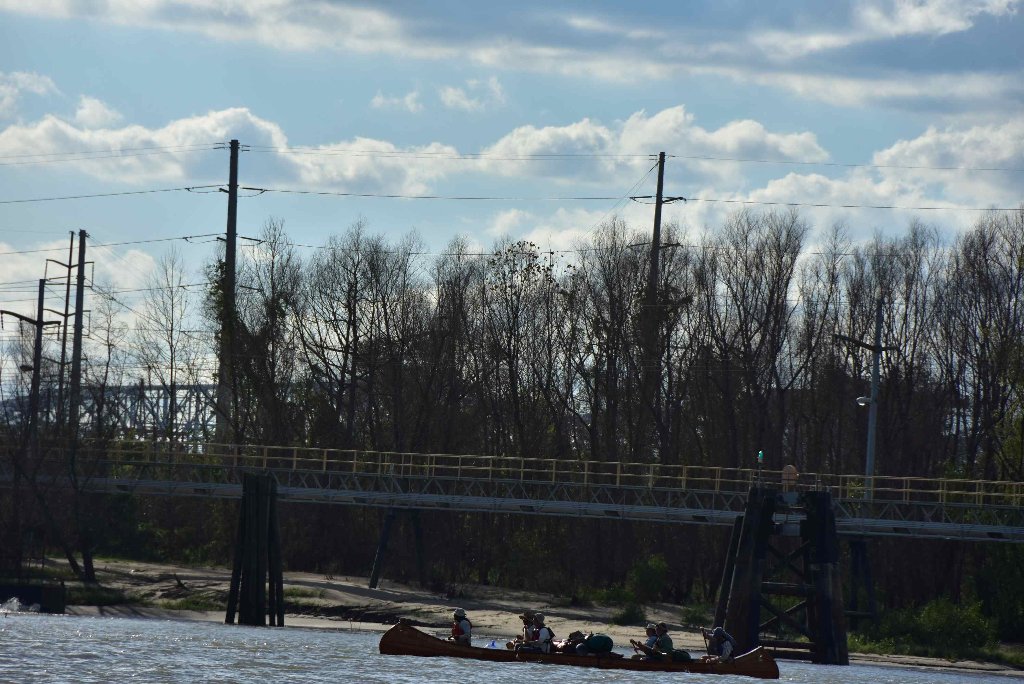 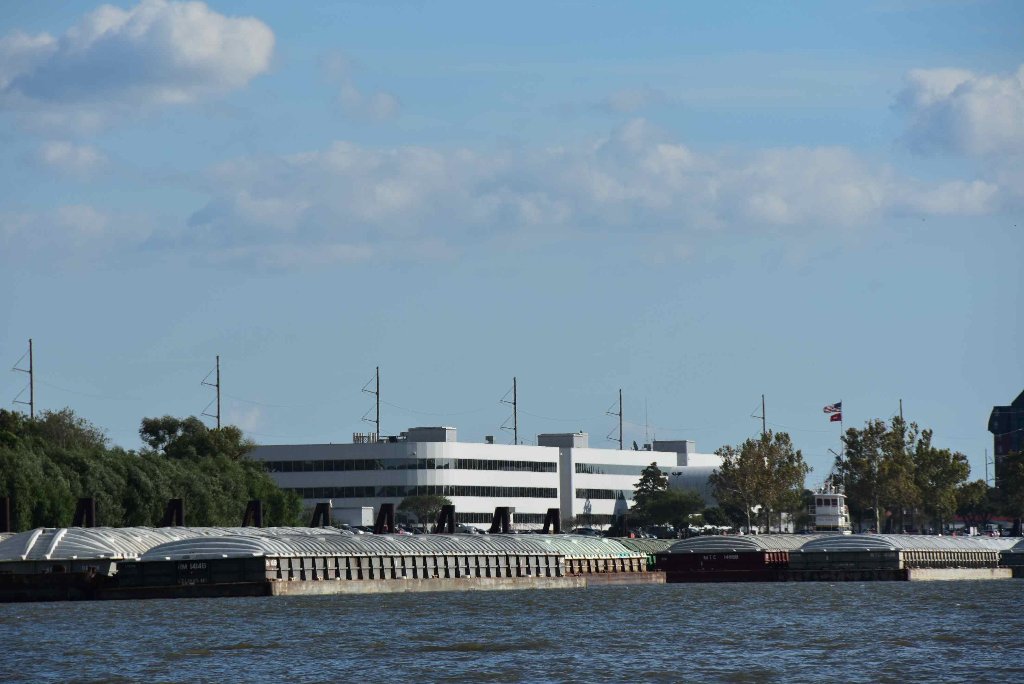 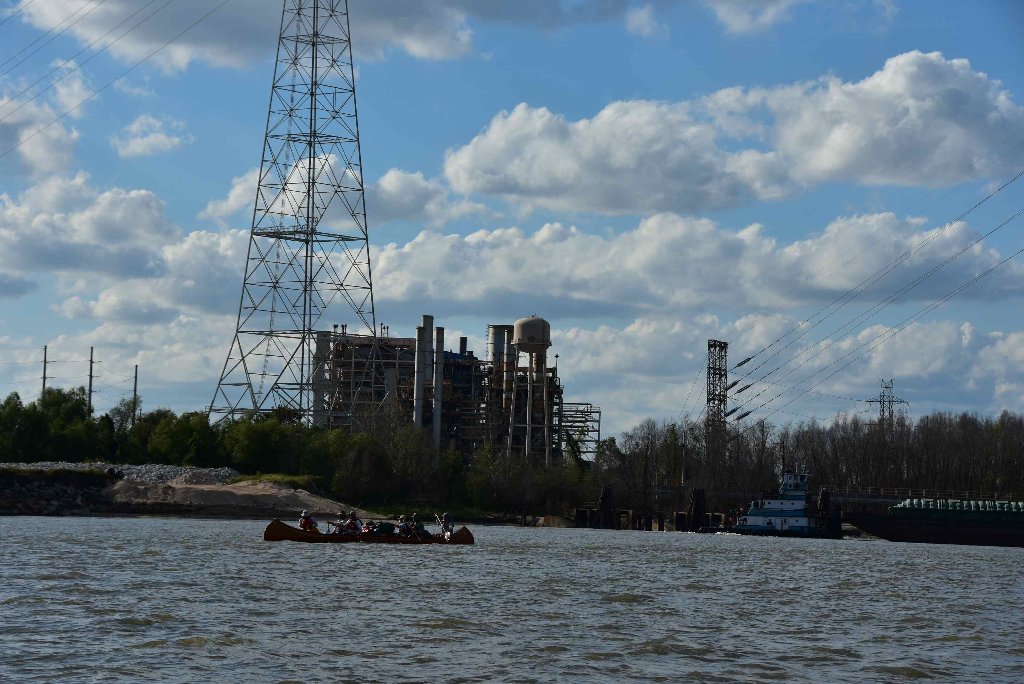 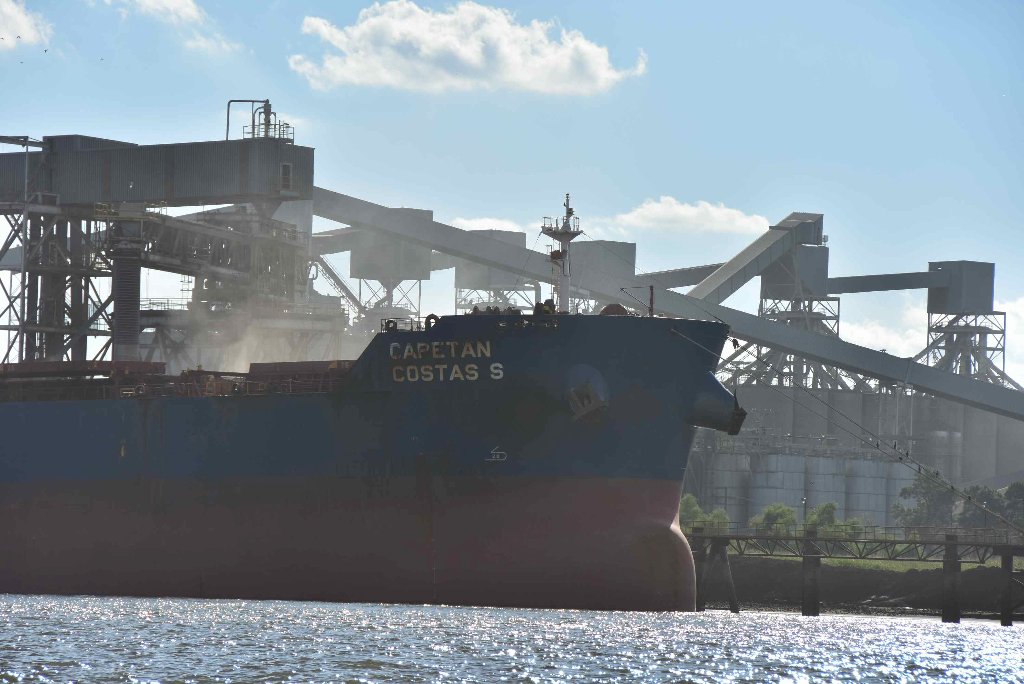 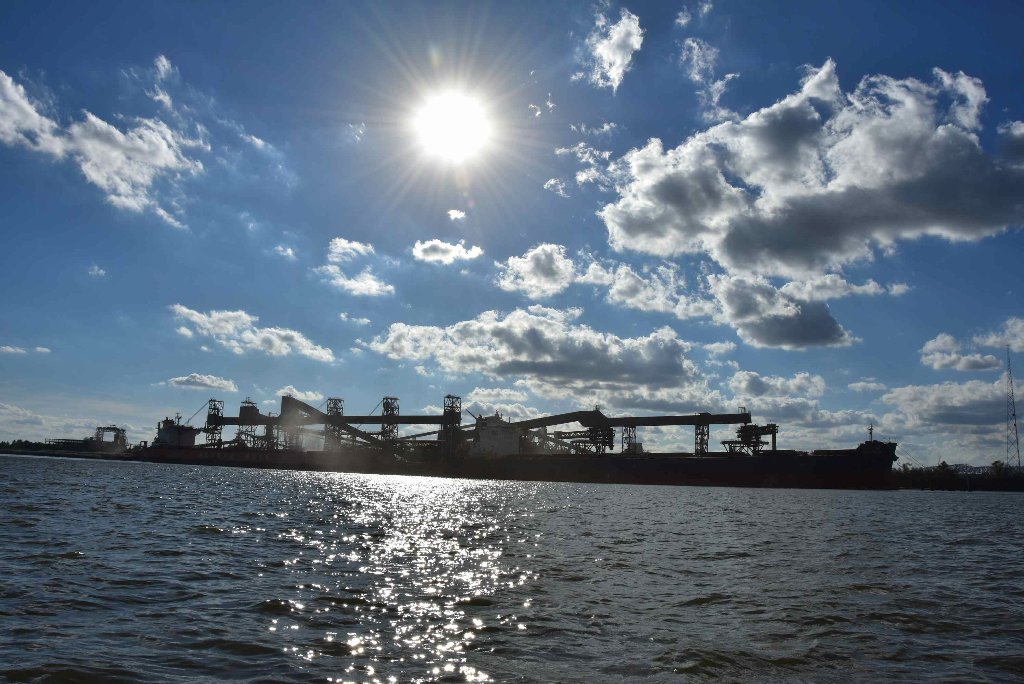 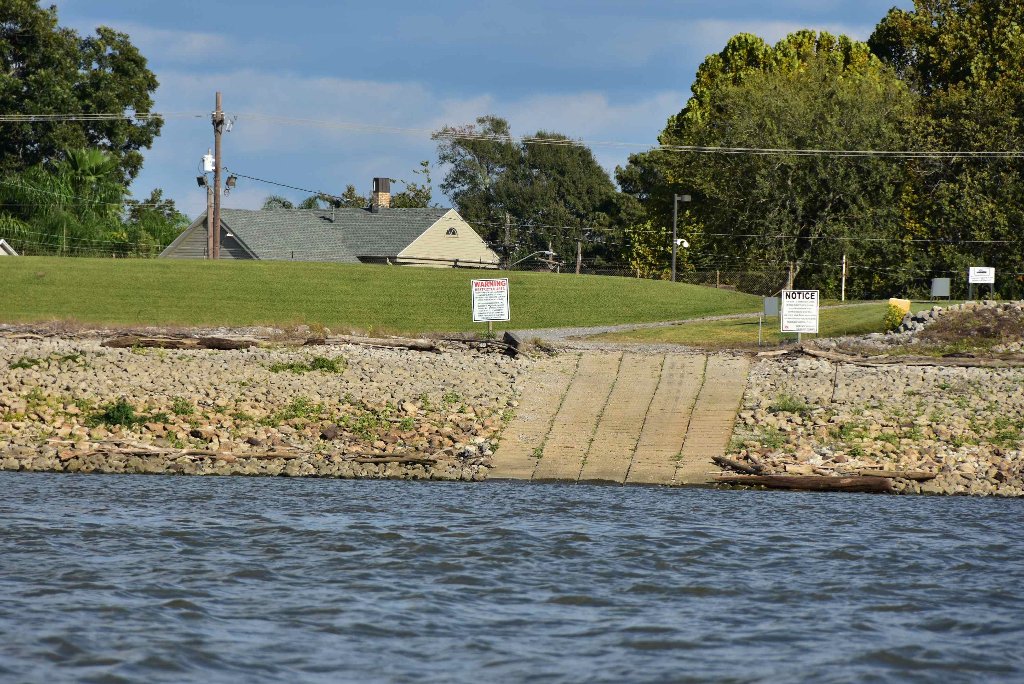 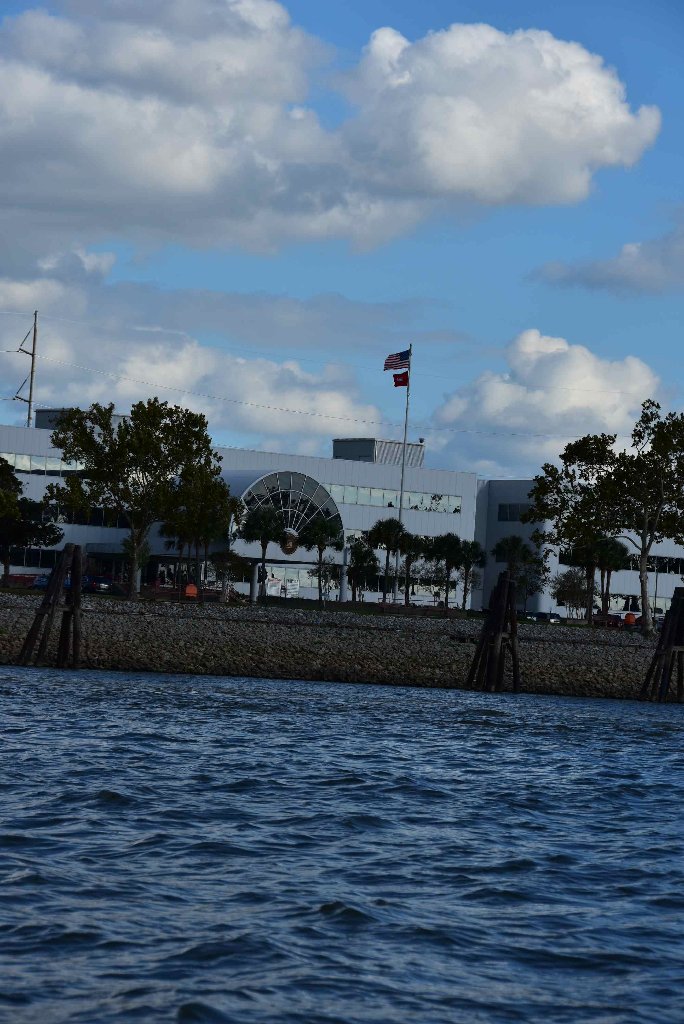