Matherne’s Market, 440 N 3rd St, Baton Rouge, LA 70802, Open daily 7:00 AM – 9:00 PM. Fortunately for paddlers, Matherne opened its doors to downtown Baton Rouge in 2015, and is an easy walk from the river, maybe one-half mile from the Glass Beach Landing. Matherne’s is a full-service grocery features a deli, bakery, and well-stocked produce and fruit sections.

Downtown Grocery at 263 3rd Street Baton Rouge, LA 70801. Small grocery with a very limited inventory. At the “E” in BATON ROUGE walk directly over the levee and you will be at Florida St. keep walking 2 blocks down Florida and Downtown Grocery will be on the corner to your right. This small grocery only has the basics like milk, bread, and coffee; they don’t have produce.
Our Daily Bread inside Main Street Market at 504 North 5th Street Baton Rouge, LA 70802 This is a large indoor space with a number of different tenants. Most prepare hot meals for lunch (there is Chinese, Crepes and Cajun/Creole) but there is a small health food store inside called Our Daily Bread which has a small selection of basic groceries for those looking for organic, healthy and allergen free products. They also have some prepared foods, smoothies, and juices. 4 blocks off the river.

The Port of Baton Rouge has 45′ deepwater access for ocean-going vessels, 3,000 continuous feet of wharf, 525,000 square feet of warehouse space, 50,000 square feet of open shipside storage, rail and truck access to transit sheds, covered tracks between warehouses allow for all-weather operations, and a conveyor systems from landside to wharf.

There is over 73,000,000 gallons of liquid bulk storage capacity at the port including storage for molasses, specialty chemicals, petroleum products, and fuels. There is also a 40,000 ton raw cane sugar warehouse and a flour mill that produces 360 tons of flour per day.

The two large white domes just upriver of the I-10 bridge are wood pellet storage domes for the Drax Biomass export terminal. Draw Biomass has a terminal in the Port that loads ships with wood pellets which are exported to the United Kingdom to burn in coal fired power plants. The wood pellets are from trees that are harvested in Louisiana and Mississippi, ground up, and pressed into pellets. This practice is ostensibly to help the UK meet carbon reduction goals but many critics of the practice believe that wood pellets are as bad or possibly even worse than coal when all manufacturing and transport factors are considered.

The Port of Baton Rouge is also home to the Community Coffee roasting plant which is the tall white building towards the back of the port just below the I-10 bridge.

Louisiana is the land of massive continuous steel truss bridges. The local geography where the land is very close to sea level combined with ocean going ships traveling the Mississippi River forces the bridges to rise up over 150 feet in the air, then cross the wide river navigation channel. For decades, the only solution to this problem was building big metal monster bridges. Of the large truss bridges over the lower Mississippi, the Interstate Highway I-10 Horace Wilkinson Bridge is the biggest of the big. It rises 175 feet above the water, making it the highest of any Mississippi River bridge, at least measured over the navigation channel (side spans of the Smith Avenue High Bridge in Saint Paul are taller, but its center span is 10 feet lower than the I-10 structure). The Wilkinson Bridge is 14,150 feet long overall, which is more than 2-1/2 miles. The truss superstructure is 4,550 feet long, and features a 1,235-foot clear channel span. The traffic deck carries six lanes of freeway traffic, seeing an average of 90,000 vehicles per day, which makes it the busiest bridge on the Lower Mississippi. The I-10 bridge appears to drivers to have a very steep incline leading to the truss spans. Many local people refer to this bridge as the ‘New Bridge’, to distinguish the structure from the older US-190 bridge located 4 miles to the north. The bridge was officially named by the Louisiana state legislature in Act 206 in 1968. The act states, “These gentlemen served diligently, contributing greatly to the betterment of the state” when speaking of the three generations of Wilkinsons who served a total of 54 years in that body. There is some dispute if the state of Louisiana legislature had the authority to give an official name to a federally funded bridge. As a result, the official bridge name is not posted on Interstate I-10. The official name ‘Horace Wilkinson Bridge’ is not widely known. In fact, representatives have unwittingly introduced bills to the legislature on several occasions proposing to give the bridge an official name not realizing that the bridge had already been named. (John Weeks)

There is a paved public ramp just downstream from the Interstate 10 Bridge, at mile 229 on the East bank. On the maps it is labeled Baton Rouge Boat Ramp, but locals call it “Glass Beach.” Its banks are covered with white clamshells of the rangia type. These were imported big time from the Gulf in previous years as a reinforcing substrate for all kinds of landings, foundations, and other construction uses. Some Louisiana roads are paved using rangia and asphalt. Glass Beach Boat Ramp is located directly upstream from the old Municipal Dock, future (2015) site of the Water Institute of the Gulf. The Pastime Lounge (po-boy sandwiches and pizza) lies about 400 yards from the ramp in the shadow of the bridge approach ramp.

Why “Glass Beach?” Embedded in the levee on the East bank (left bank descending) just upstream from the I-10 Bridge, behind some sheet piling, sits –not inappropriately—a dump. It closed before 1960, but locals know this spot as the “glass beach,” because it glitters at low water. Don’t go exploring barefoot here. The ground is sparkling with the razor sharp edges of thick green glass — the kind from yesteryear that is robust and slightly greenish-bluish in its translucence. If you want a souvenir of Baton Rouge, see if you can find an old Coke bottle bottom with “Baton Rouge” molded into it. (Mike Beck)

Glass Beach Ramp is the only public access for boaters on the main channel of the Mississippi within greater Baton Rouge. If you need access to water, supplies, or a shuttle pickup, this is the ramp you’ll want to use. (Note: The boat ramp shown in the so-called “Baton Rouge Harbor” on the USACE 2007 maps is not publicly accessible it is part of an old Baton Rouge Landfill property which is behind locked gates). The only other choice would the public boat ramp on the other side (the west side) of the Port Allen Lock and Dam of the Intercostal Waterway (RBD 228.4).

Getting to Glass Beach is kind of weird from the land side. Drive west down South Blvd towards river (alongside the I-10 Bridge) until you reach the levee. Take the ramp straight in front of you up the levee as South Blvd curves south to become S. River Road. Ignore “No Trespassing” signs as you drive up and over the levee. Watch for bicyclers and pedestrians on the paved levee trail. Follow the road as it deteriorates into a potholed dirt road under the I-10 Bridge and follow it to a very roughshod landing with no clear boundaries and littered with industrial and other trash. The ramp is broken concrete with steel rails of some sort attached. If you are driving in, pull off to the side wherever you can and meet your party. We have driven big trucks with long trailers to load and unload our voyageur canoes here, and have always been successful in making a good launch. It’s rough, but eminently usable, from low water to flood stage (35 BR).

Don’t leave your vessel unattended at Glass Beach. It is not recommended for overnight camping. Baton Rouge is a big city with all the problems big cities have. Use common sense safety practices. Your best option for resupply is to leave one person at the ramp and the other walk into town for whatever you need. If you are staying for any length in Baton Rouge, remove your vessel from the water and take it with you. Call the Lower Mississippi Riverkeeper 225-928-1315 if you have any questions about logistics and access.

After Hurricane Katrina ravaged New Orleans dozens of refugees made Glass Beach their home, and it became a tent city full of the homeless huddled under blue tarps and ringed around driftwood fires. The city has since run the homeless out and keeps the area mowed to discourage its use in that way (mowing being the only upkeep that the city undertakes of the ramp). 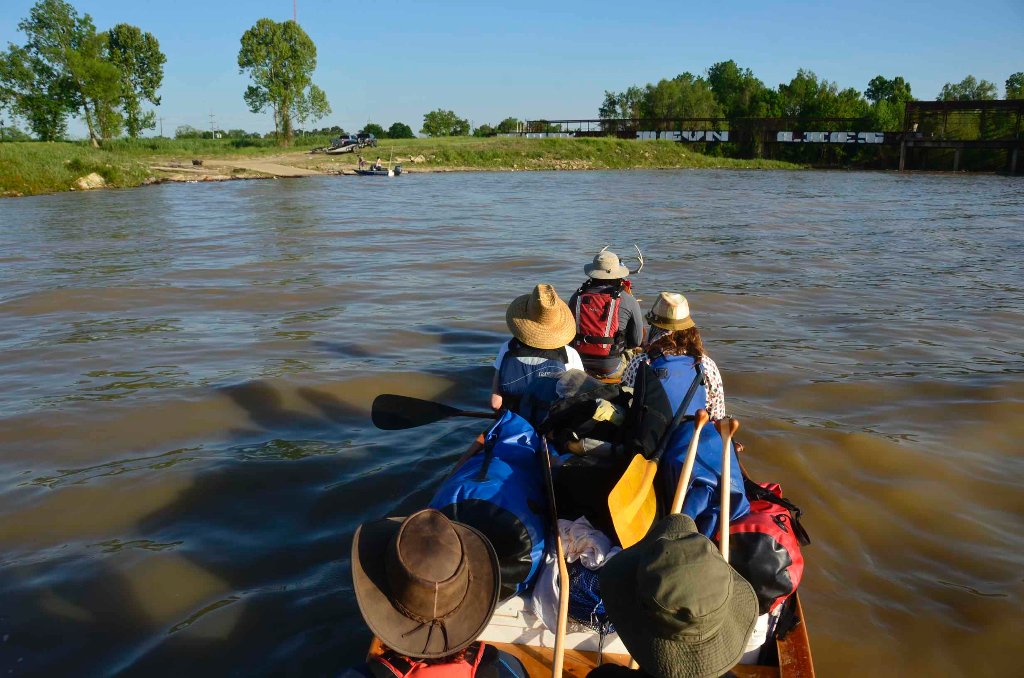 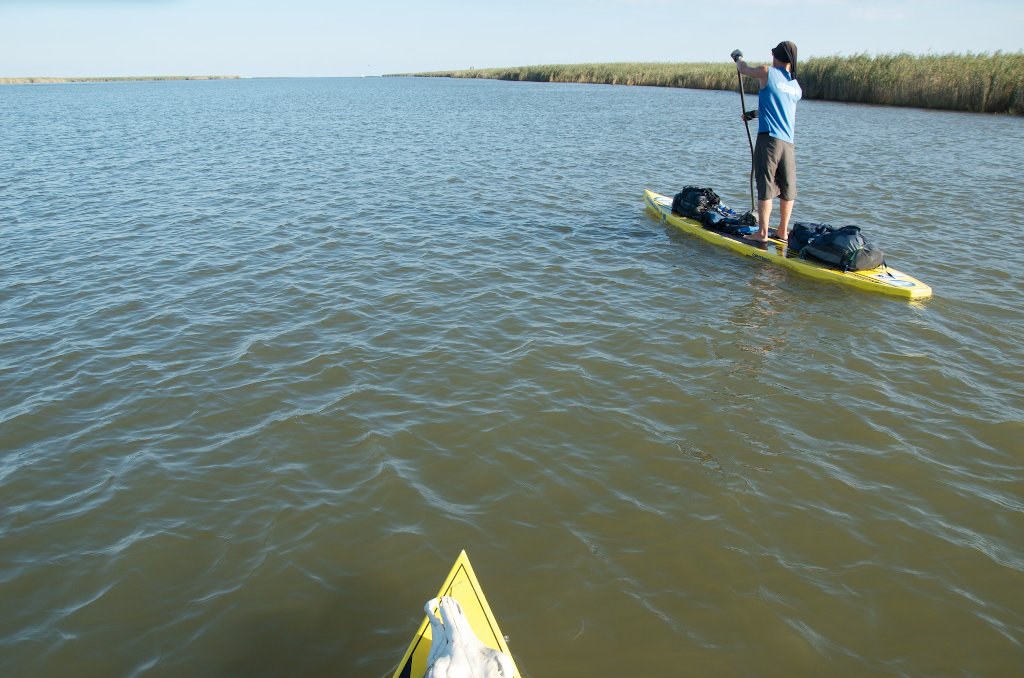 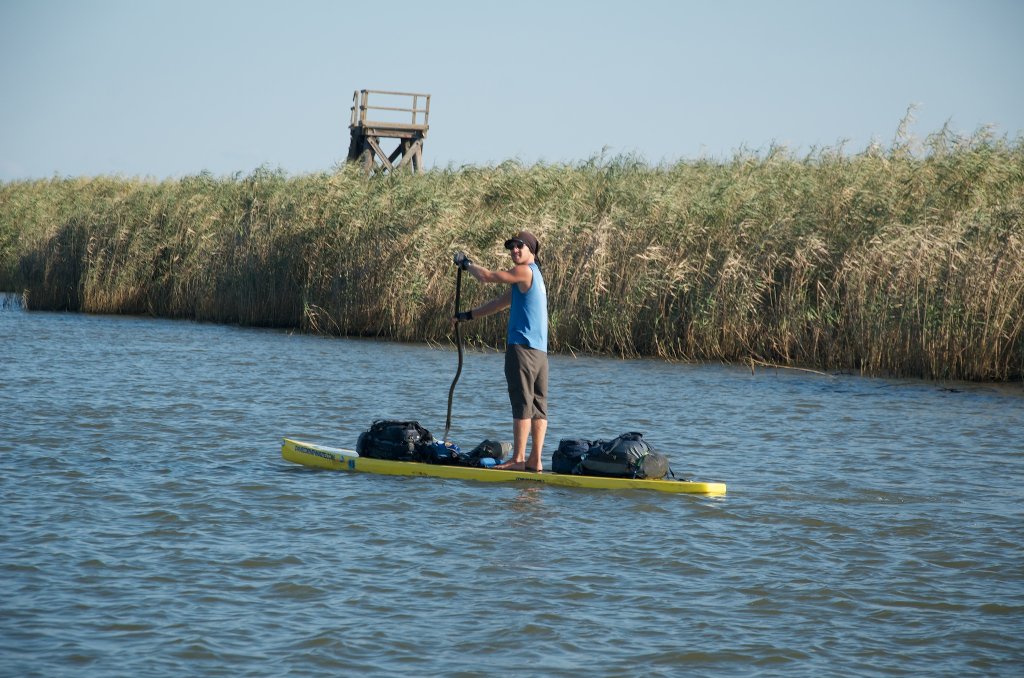 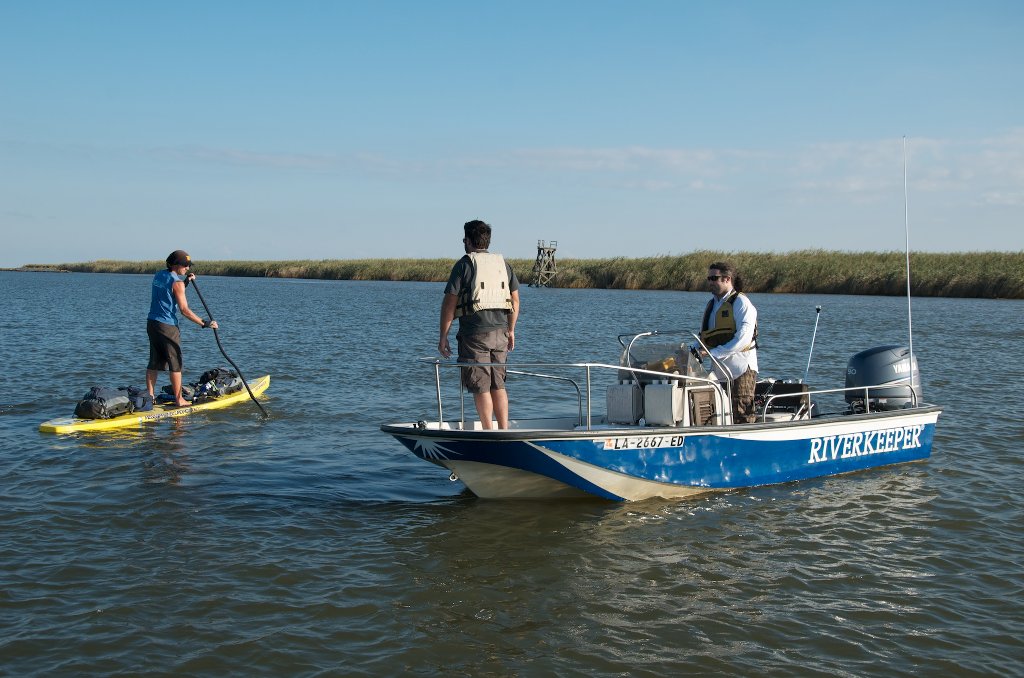 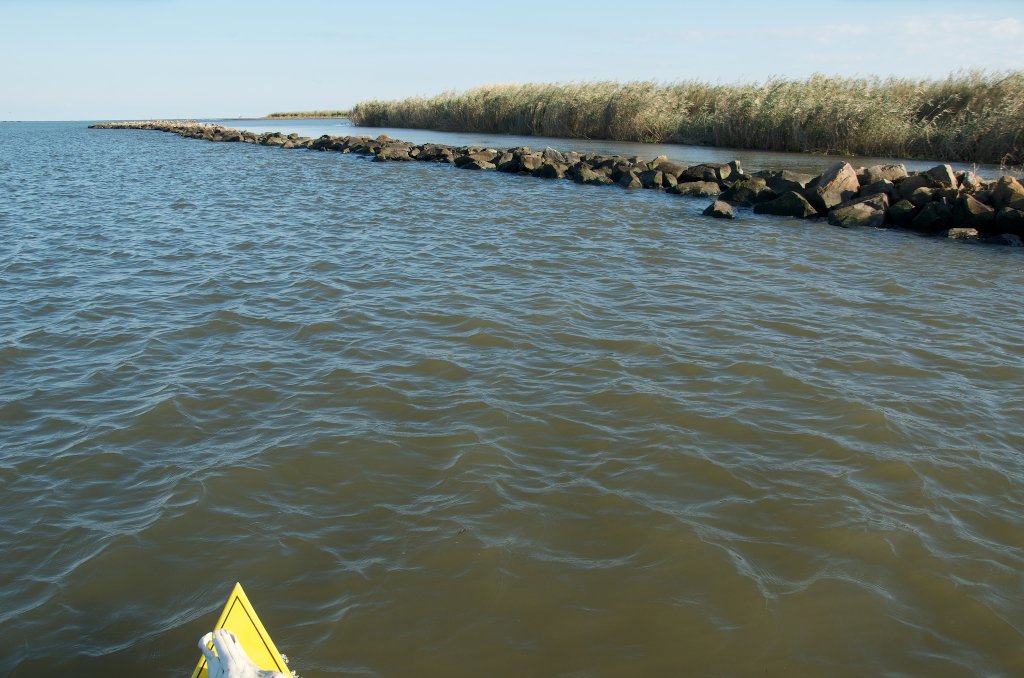 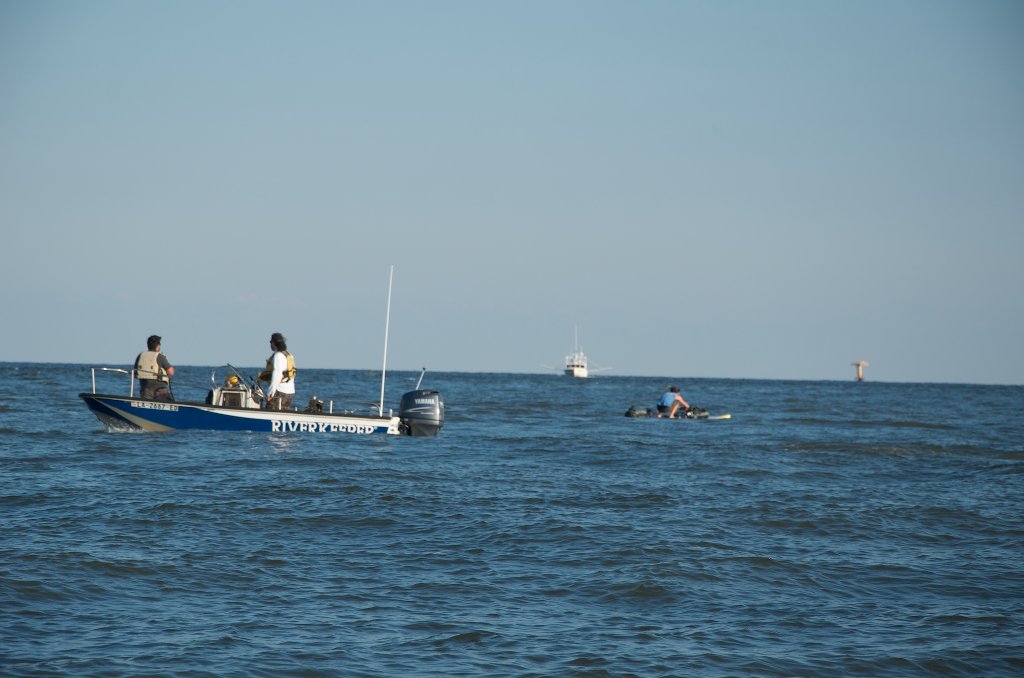 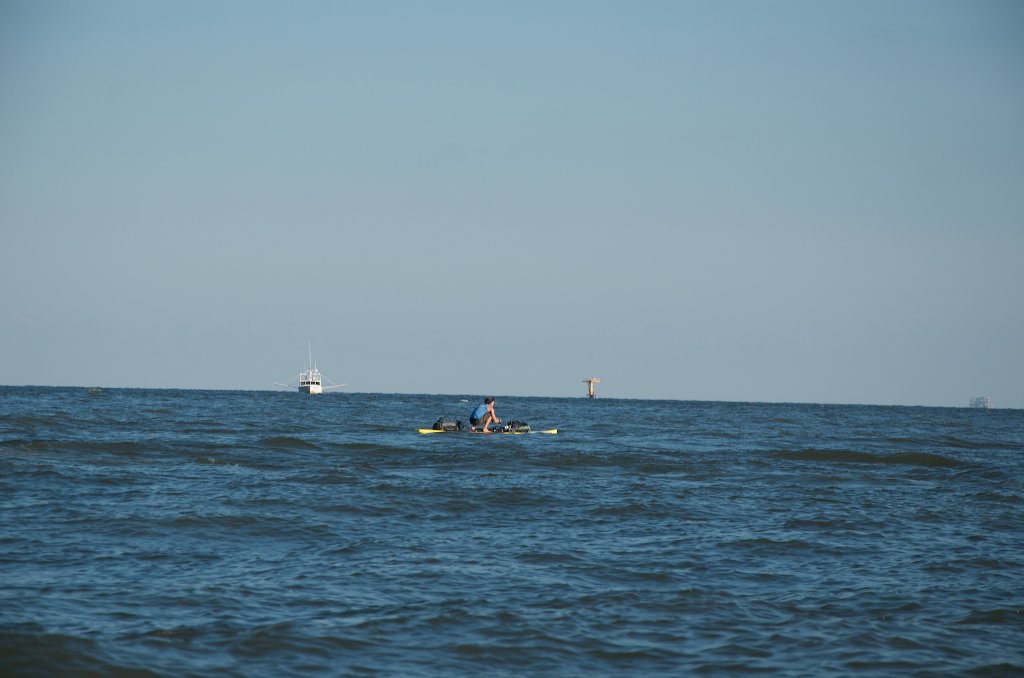 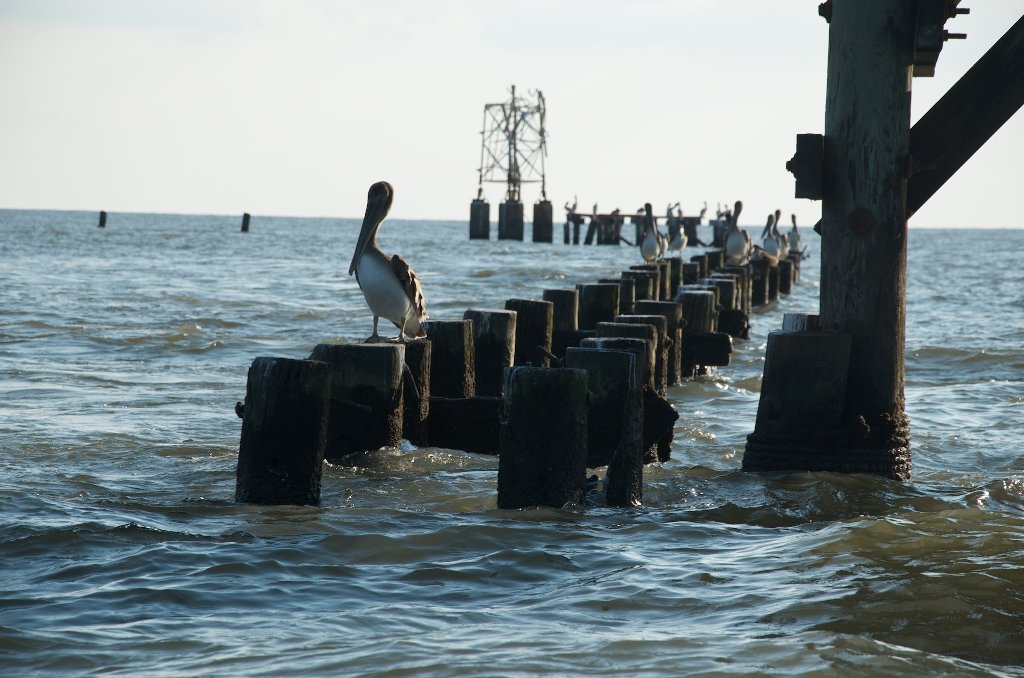 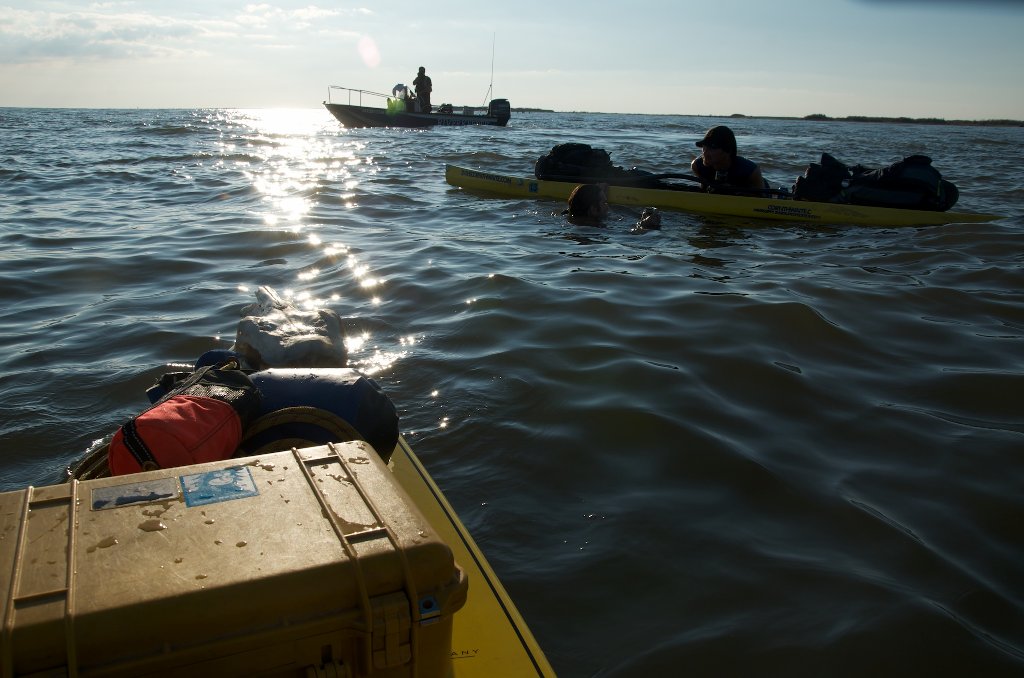 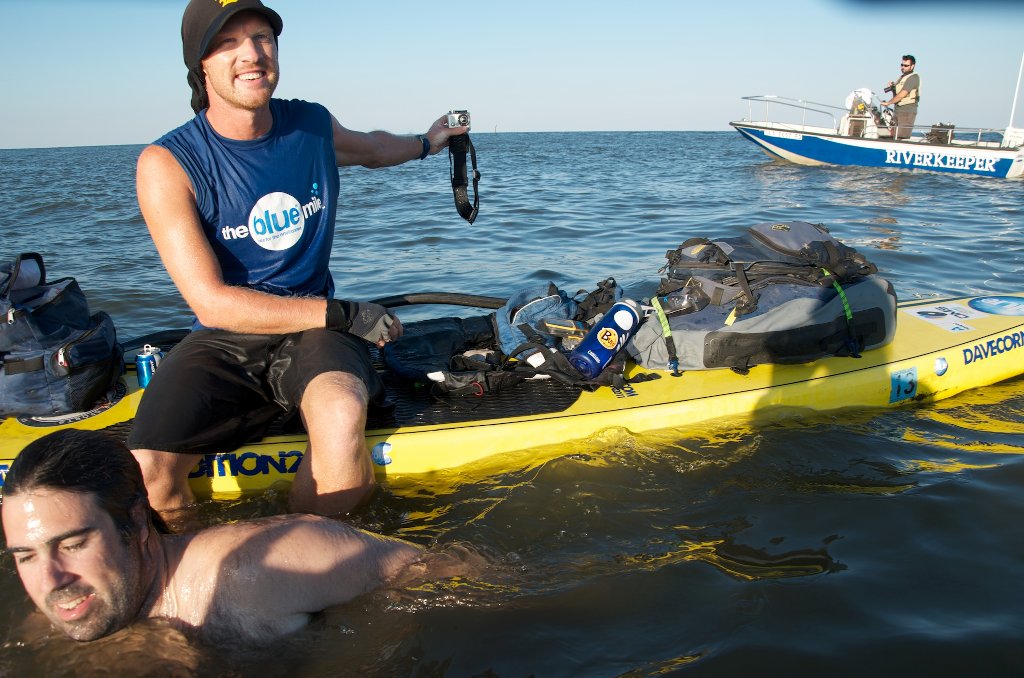 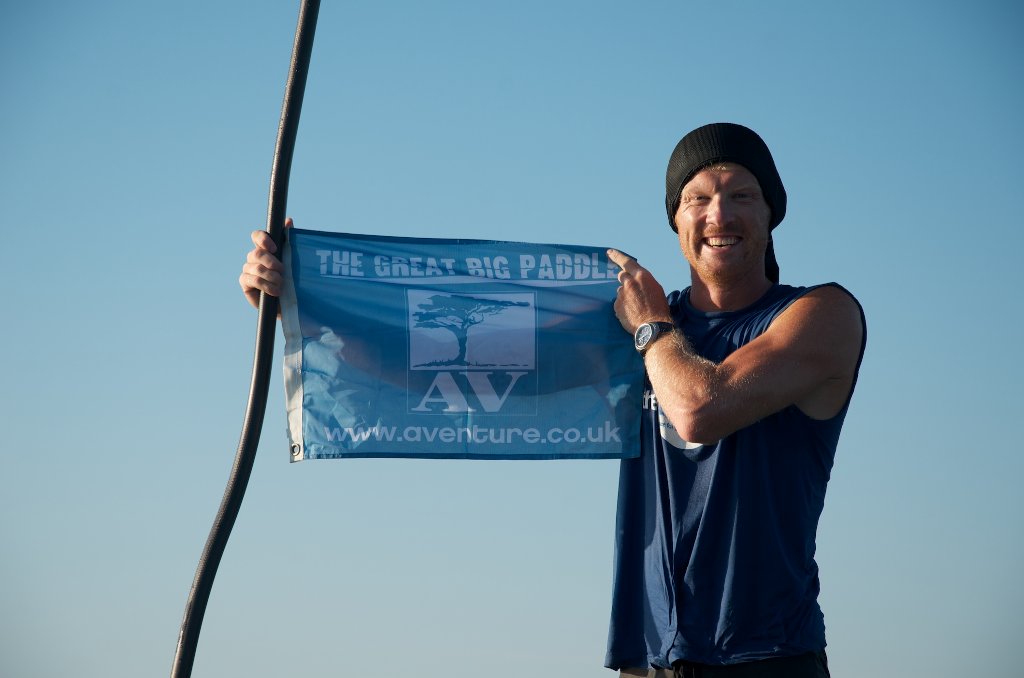 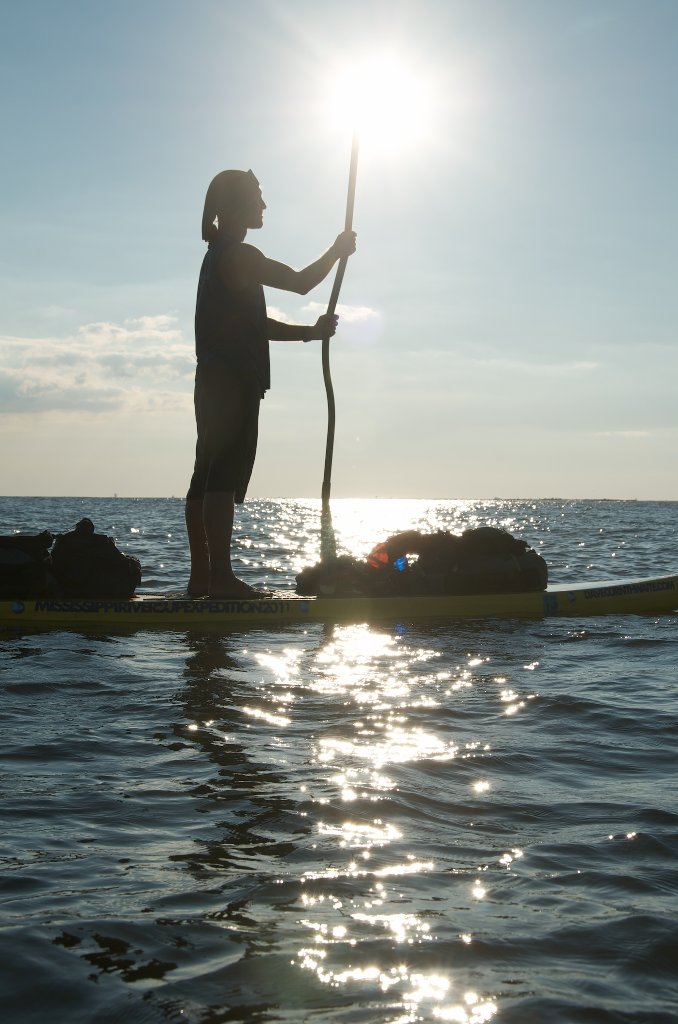 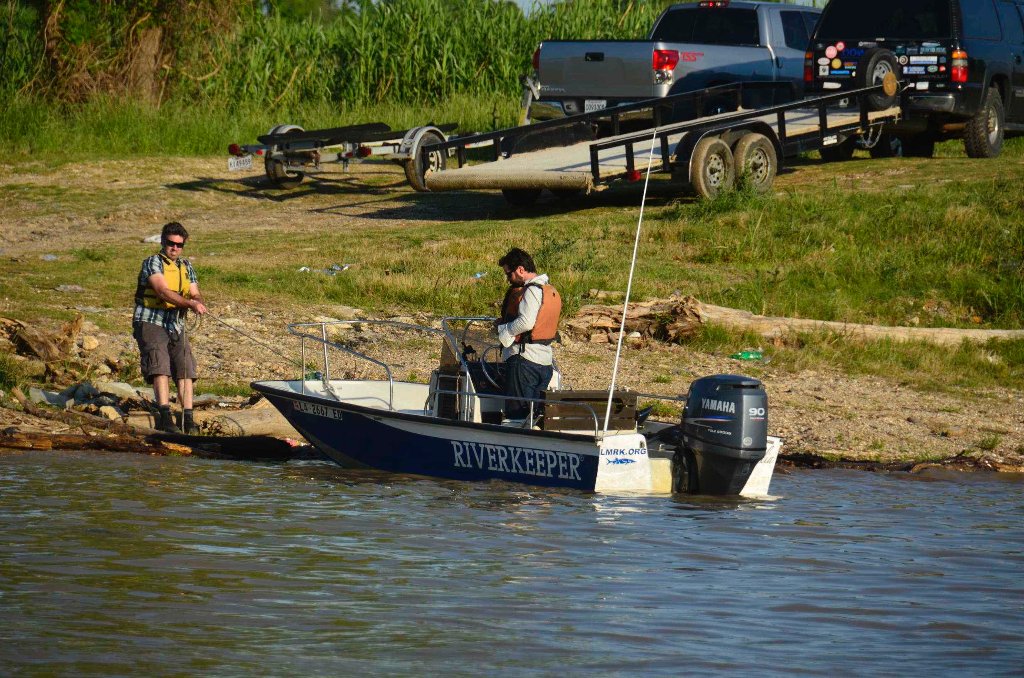 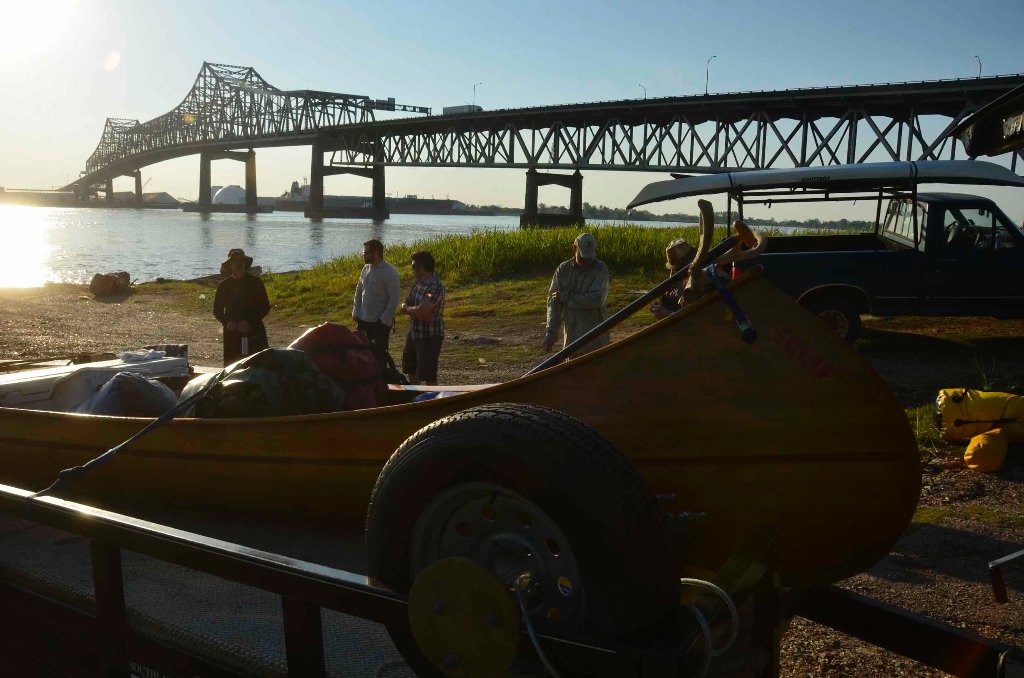 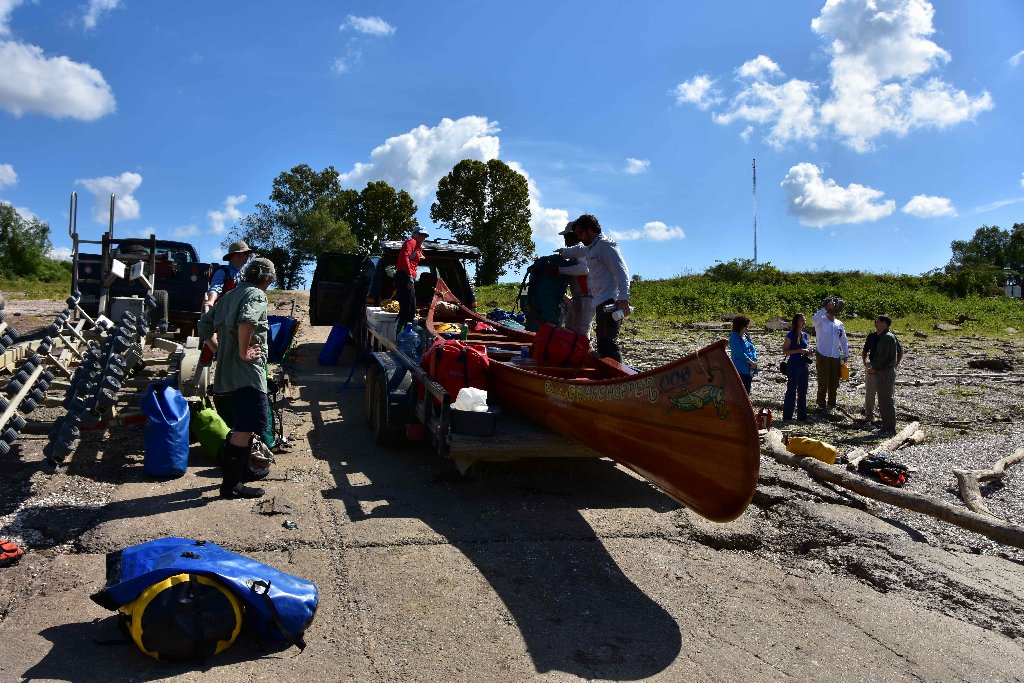 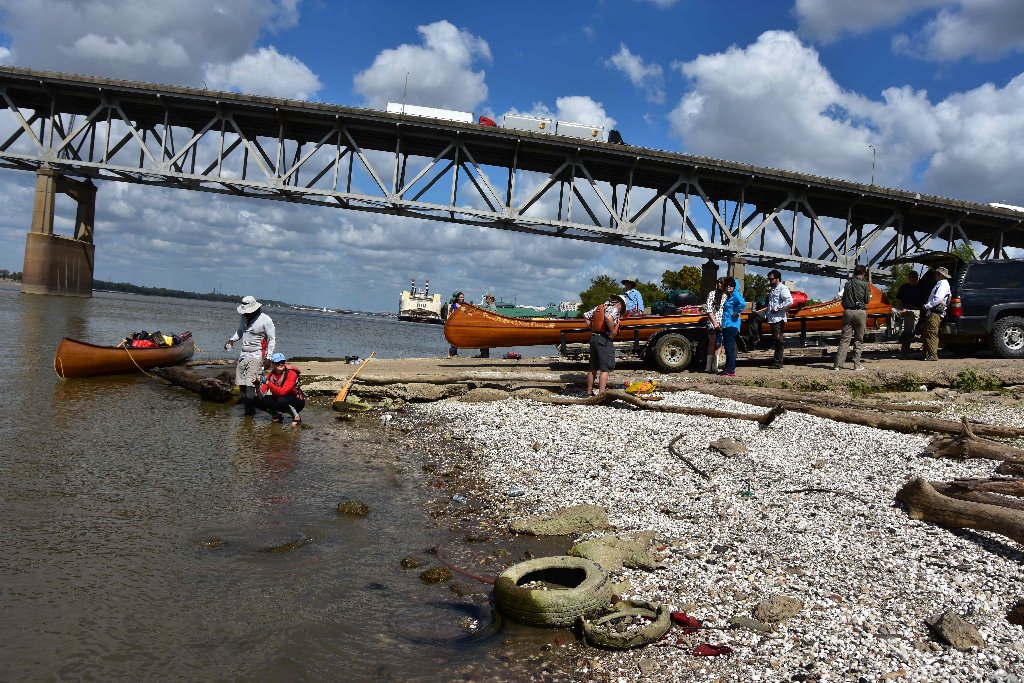 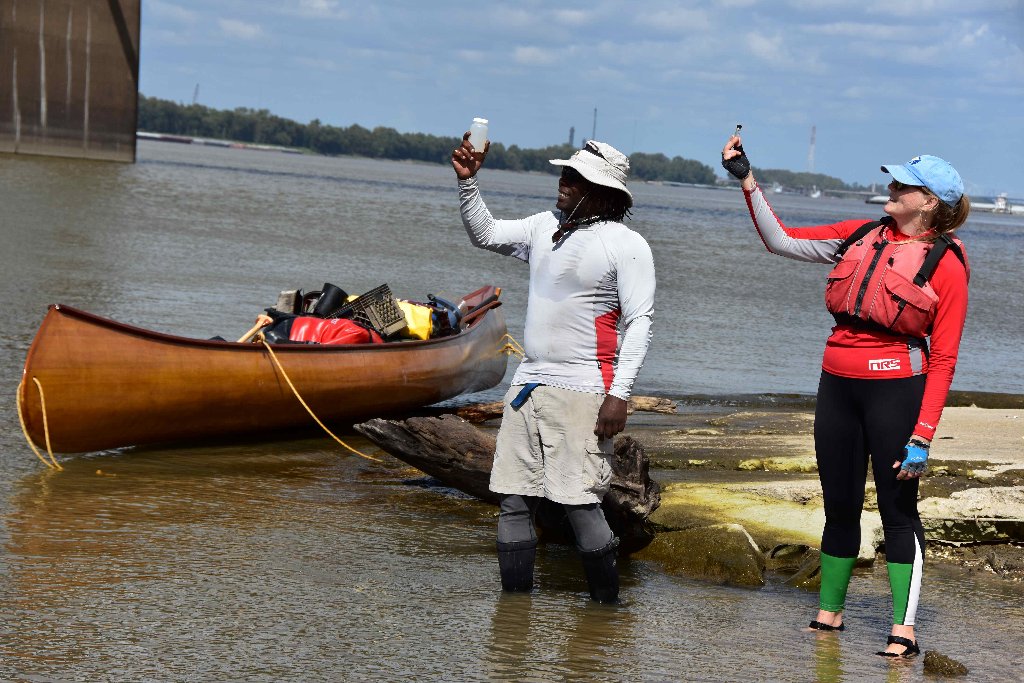 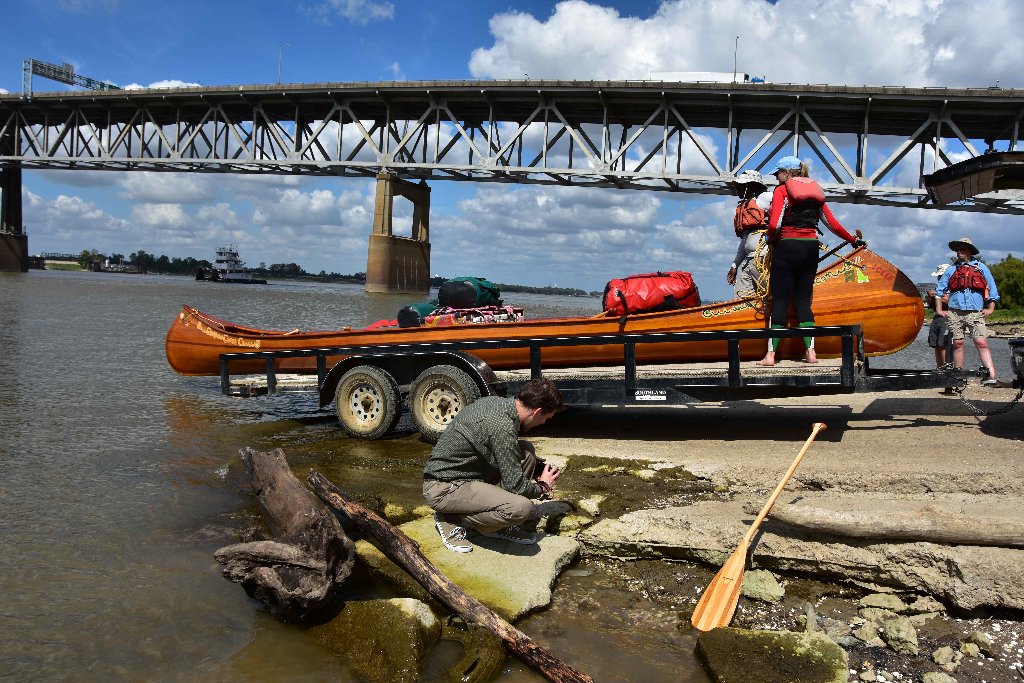 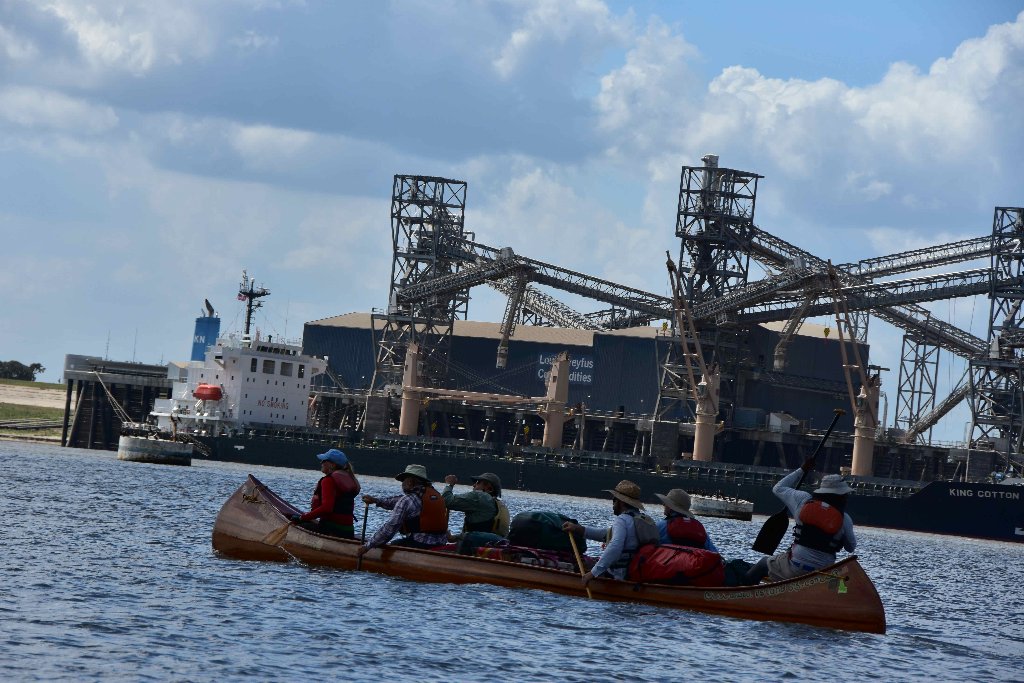