Some Music venues of note within Walking Distance

Paddlers coming into New Orleans will be rewarded for all those long miles through the wild soul of middle of America with an infusion of arts and culture in the birthplace of Jazz, and the heart of a thriving modern music scene. You can of course revel in all of the culture awaiting you around the bend and six miles downstream – that is, within walking distance of the Moonwalk, your best access point close to the French Quarter. But please be aware: you can also make Audubon Park your point of access for the Uptown areas of New Orleans. First of all you will have to remove your vessel from the water and safely stash it somewhere. Once you have done this, and maybe found a hot shower, treat yourself to a long walk through this beautiful section of the city, and maybe a night on the town. Your spirit will be revived and you will be well prepared for the final 100+ mile run still remaining to reach the Gulf of Mexico. Some of the highlights of Louisiana music & culture you can walk/take streetcar around Uptown include: Tipitina’s (501 Napoleon Ave), The Maple Leaf Bar (316 Oak Street), Dos Jefes (535 Tchoupitoulas Street), Le Bon Temps Roulé (4801 Magazine Street), Freret Street corridor (Gasa Gasa music venue, Other Bar, Publiq House, and Freret Street Po Boys, and others), and the Magazine Street corridor (Ms. Mae’s The Club, The Saint, and Nirvana Cuisine, and others). Le Bon Temps Roule is a good dive bar and music venue at 4801 Magazine St. For the typical full NOLA Brunch try Dante’s Kitchen (736 Dante St) or Tartine (7217 Perrier St – more of a bakery with a very good breakfast). Or follow your nose and discover something new and unheralded! The scene is like the river: forever flowing and evolving.

Paddlers seeking a health food/gourmet food resupply for your final leg down to the Gulf of Mexico might want to secure your vessel and then walk across Audubon Park to Magazine Street. Walk down Magazine Street 7 blocks to find Whole Foods. Whole Foods Market, 5600 Magazine St, New Orleans, LA 70115, Open Daily 8am-9pm.

Getting through the greater New Orleans harbor is the crux move of the 2300 mile long Mississippi River. But you have paddled through other difficult urban stretches, such as Minneapolis, and St. Louis, and Baton Rouge, so you are well prepared. If you got past Norco you will be alright here! The river has taught you everything you need to know. All of the skills she has shared you will now put once again to test. When you round 6-Mile point (right angle turn) the East Bank becomes an unbroken wall of wharves and docks, with only a few possible take outs, but sketchy at best (which you will paddle along all the way under the Crescent City Connection, past the the French Quarter, and beyond, almost all the way to the Industrial Canal). Meanwhile, across the river here, there is a thin mile-long green space along the West Bank opposite the Fly, 6-Mile Point, where you could take shelter if needed, but it is guarded by a ragged wall of rip-rap, and will require a quick portage to the woods behind if you make landing. Henry Clay Avenue is the first Wharf East Bank, followed by the Nashville Avenue Wharves A, B, and C, and then Milan Street Wharf, Louisiana Avenue Wharf, and so and so forth, all the way down to the Governor Nicholls Street Wharf, which is at the French Quarter. Along these wharves are some enormous cranes for stevedoring, and container ships, but there is no designated fleeting nor any designated anchorages, so at least you don’t have to worry about those additional hazards. But there is also no clear line of travel. If you keep in the slower water along the East Bank (LBD) wharves you will butt heads and rub shoulders with many smaller tows and supply vessels and busy workboats. If you stay further out in mid channel sooner or later you find yourself uncomfortably in the path of an oncoming freighter. Go with the flow and follow the path of least resistance. On most days, the least busy path for paddlers (and fastest water) is far West Bank (RBD), but you must make a long crossing to get there if you have made a stop in Audubon Park. Watch for side traffic entering the river West Bank 98.2 RBD at the Harvey Lock, which is the entrance to the Harvey Canal (which in turn connects to to the Intracoastal Waterway West).

The intensity had already begun when you paddled under the Huey P. Long Bridge, and then around 9-Mile Point. But now it increases. Watch carefully and listen to VHF 67 for oncoming traffic past Audubon Park and on around 6-Mile Point. Stay on your toes, and keep on point. The river has been busy, but it gets even busier now now with the addition of container ships, cruise ships, battleships, other navy ships, and lastly steamboats. You’re now in the territory of the Natchez, the classic sternwheeler steamboat moored above the Moonwalk. The Natchez makes daily cruises up and down the river from the French Quarter. The Mississippi Queen was sadly dismantled piece by piece underneath the Crescent City Connection several years ago, and the Delta Queen has been insulted with a drydocking in Chattanooga, but the American Queen still plies the waters, and is now joined by a rival company with the American Eagle. (Viking is reported to be building 5 riverboats and introduce them to the Mississippi by 2017). There are three ferries in this stretch, Gretna, Algiers, and Lower Algiers.

National Gypsum Co. is a gypsum board (sheetrock) production plant. Its Toxic Releases in 2013 were 95,304 into the air.

Directly across from Audubon Park’s The Fly is the City of Westwego Landing which is all rip-rap and mud, but could be a useful pull out in case of emergency.

Low, muddy place, not recommended for camping or picnicking. Six-Mile Point would make a beautiful rest stop if not for two facts: one it is so low to the water, it goes completely under around 8NO, and two, is that it’s all mud. This seems like it would be the perfect point for sand-generating physics, but contrary to previous experience, its all mud here. 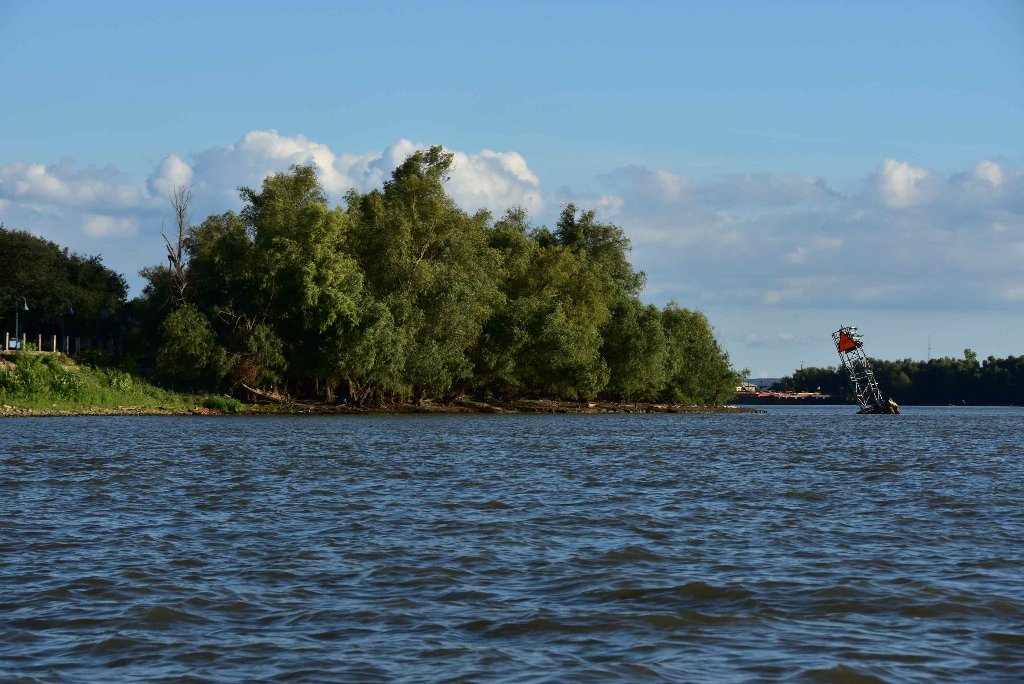 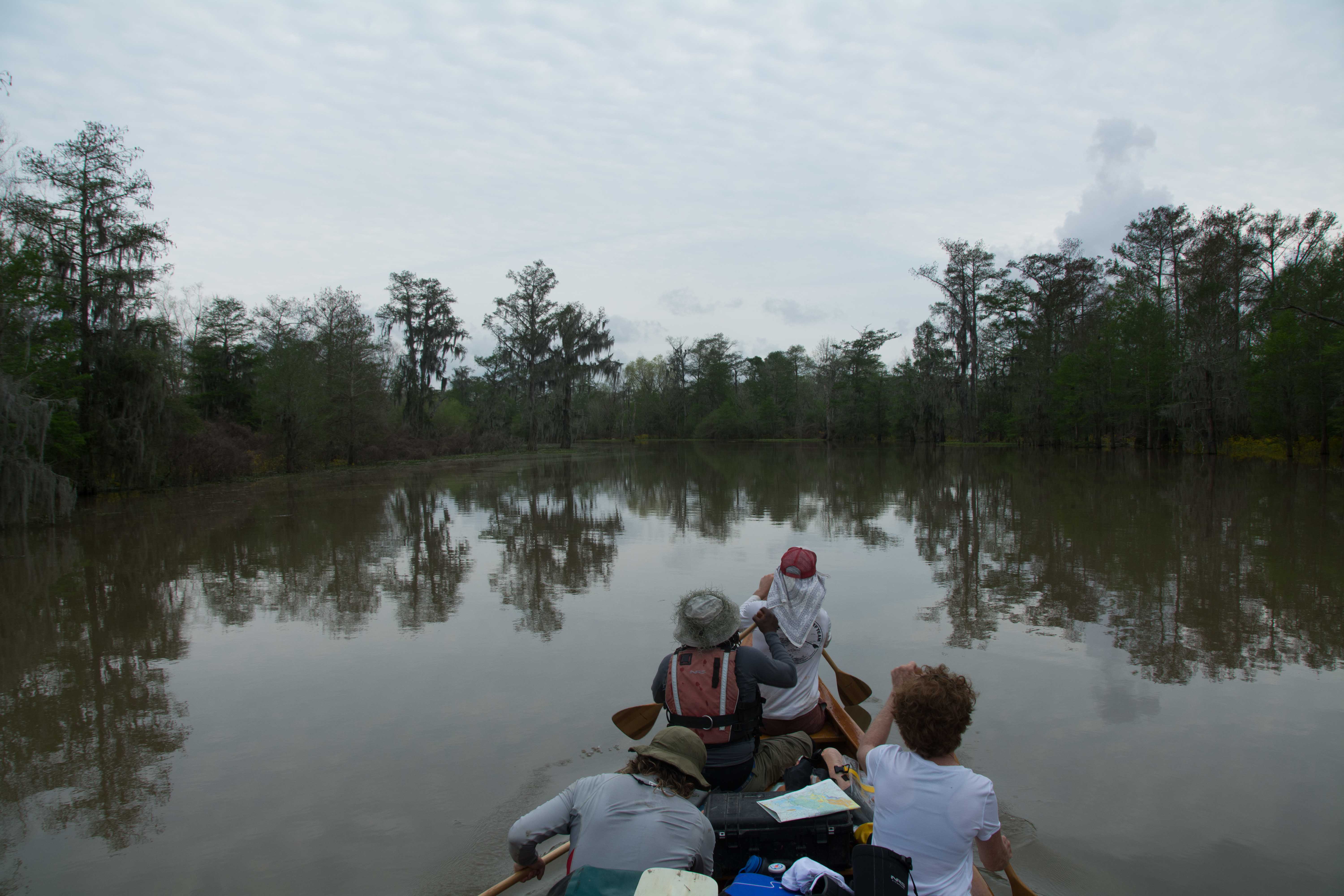 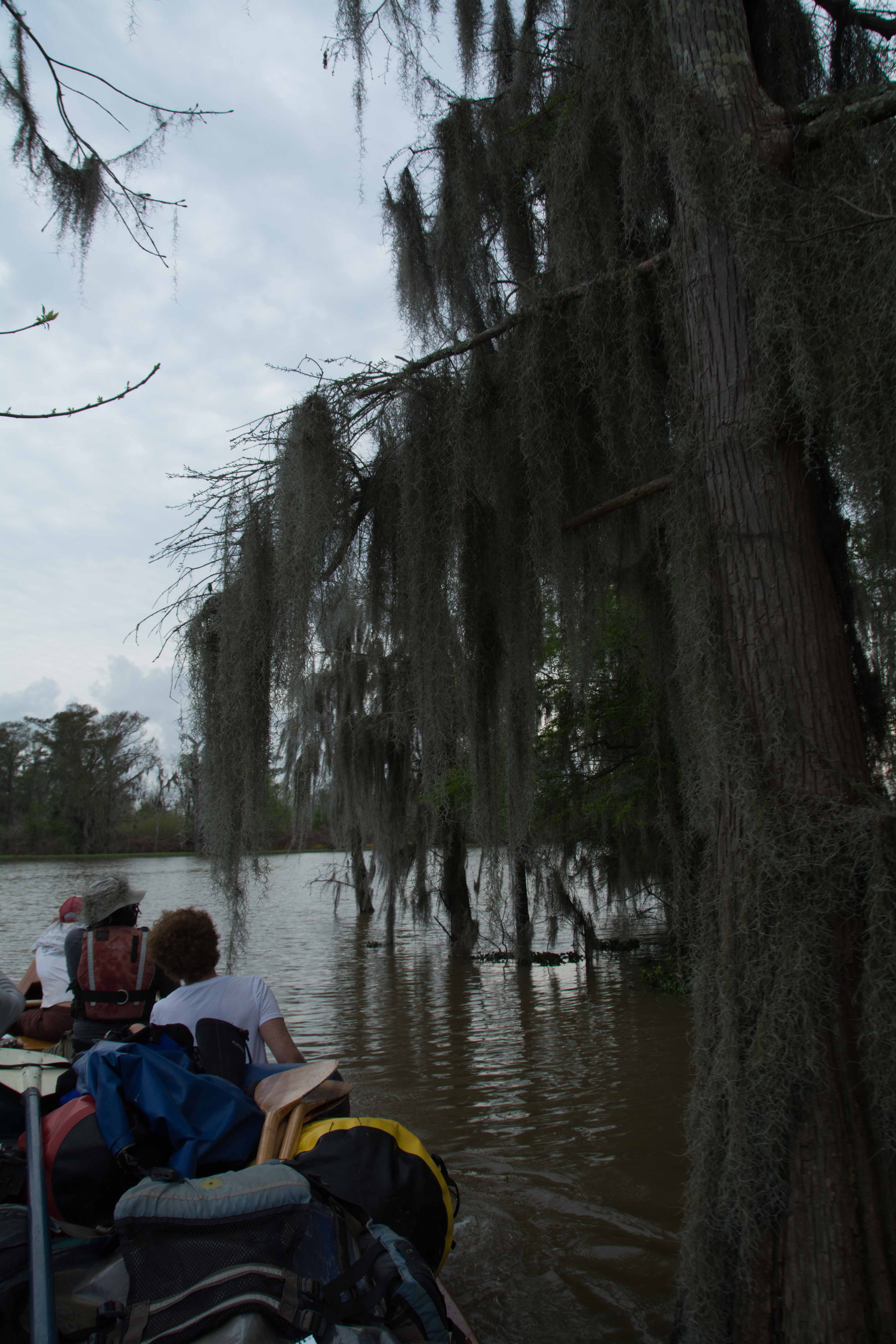 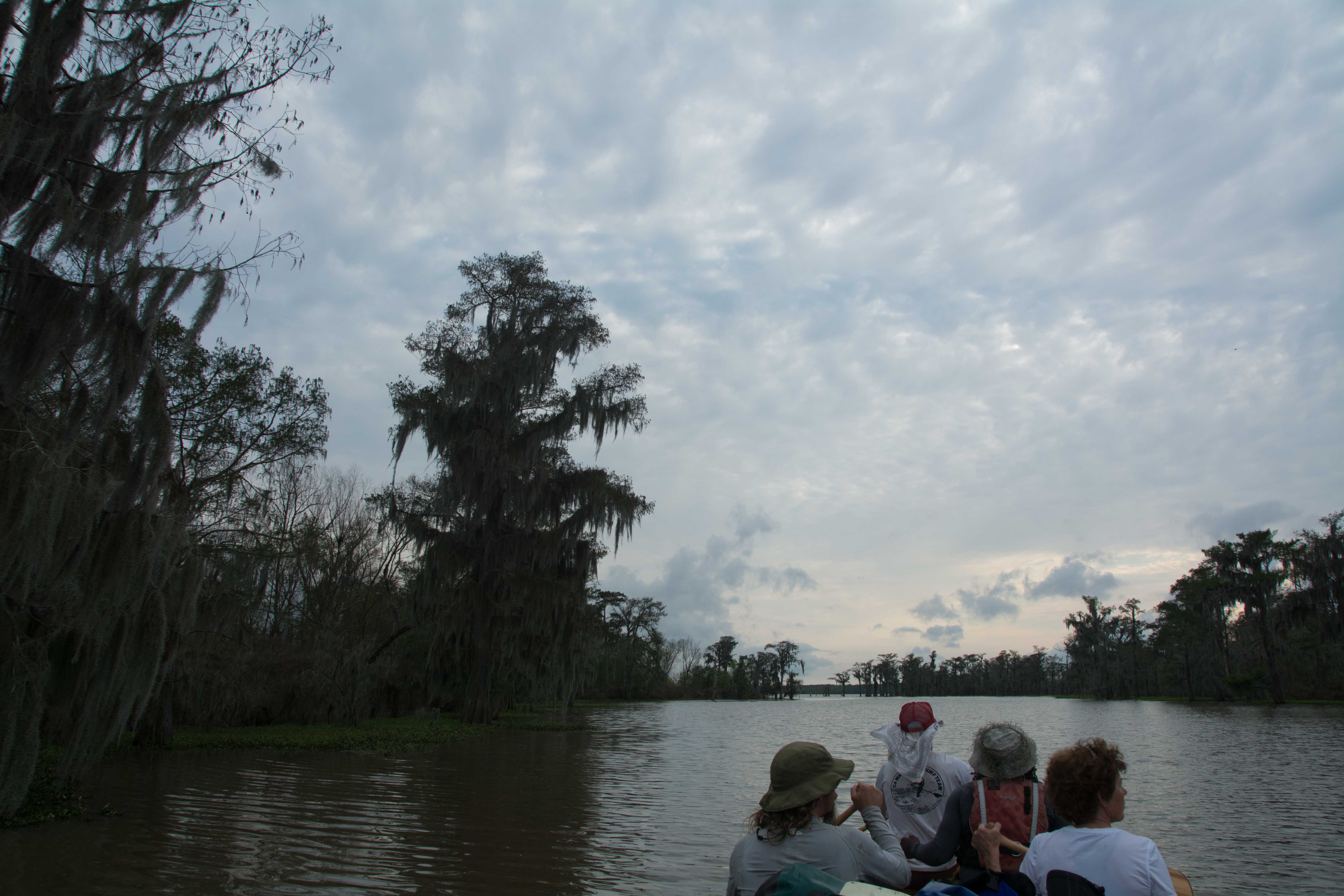 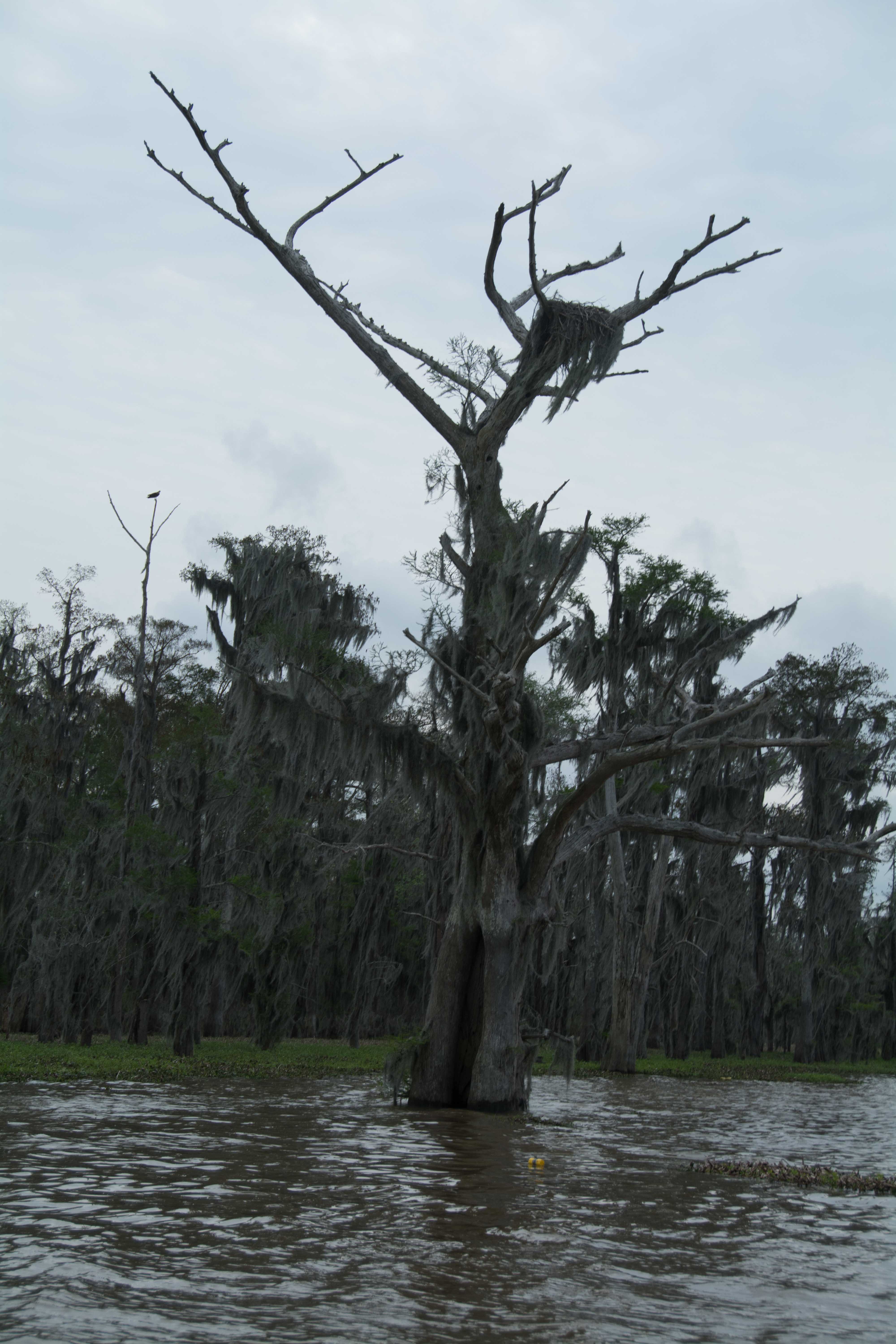 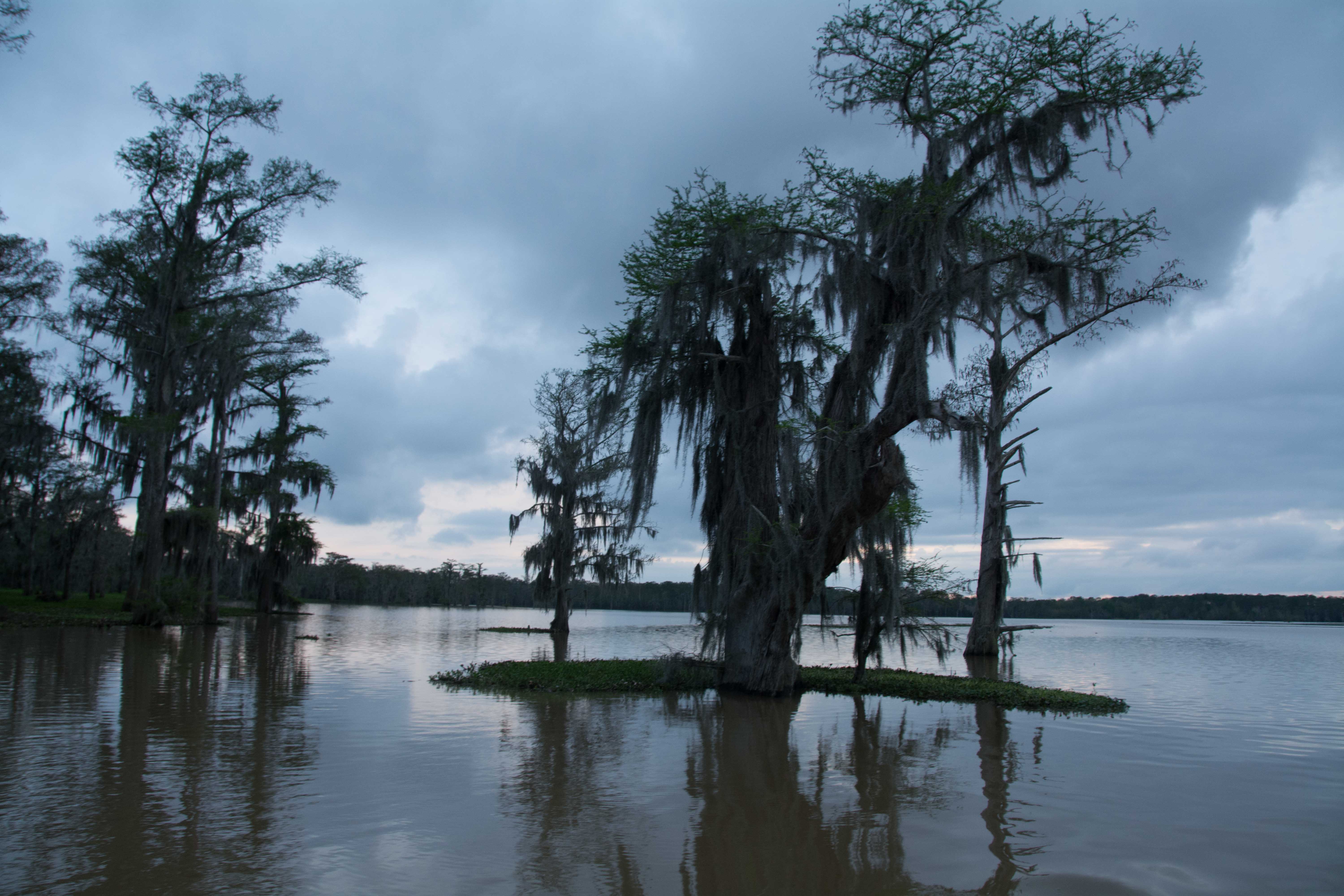 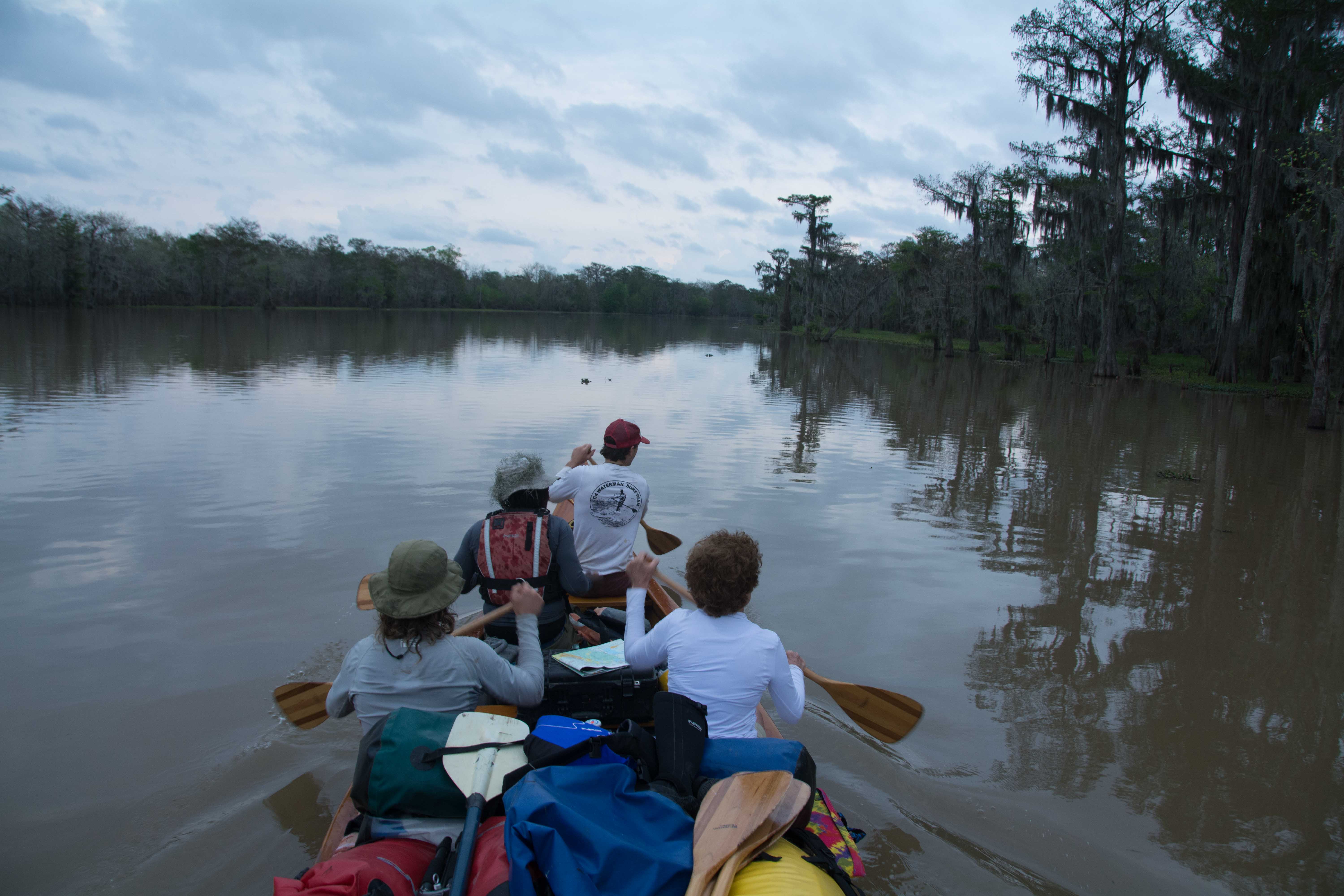 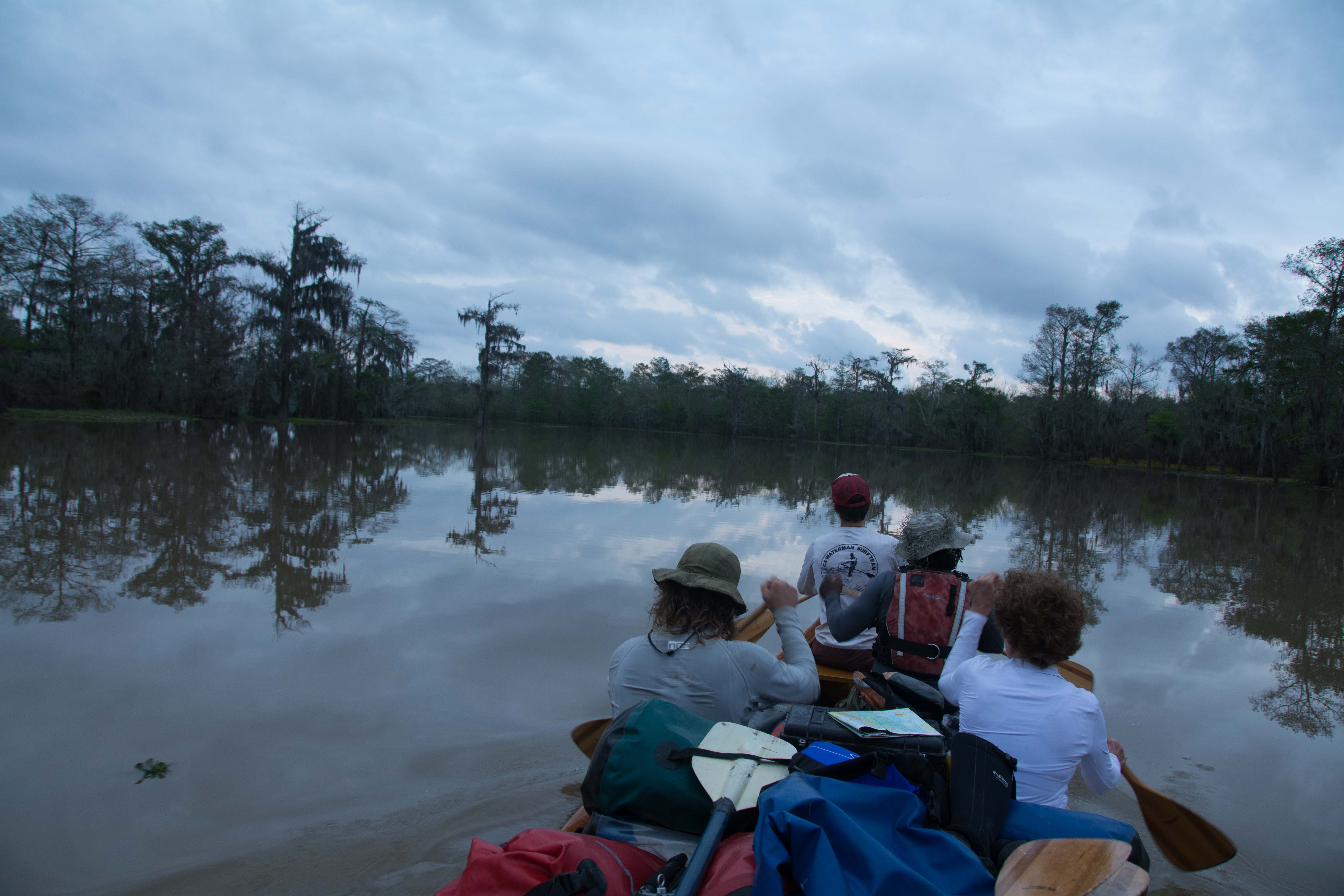 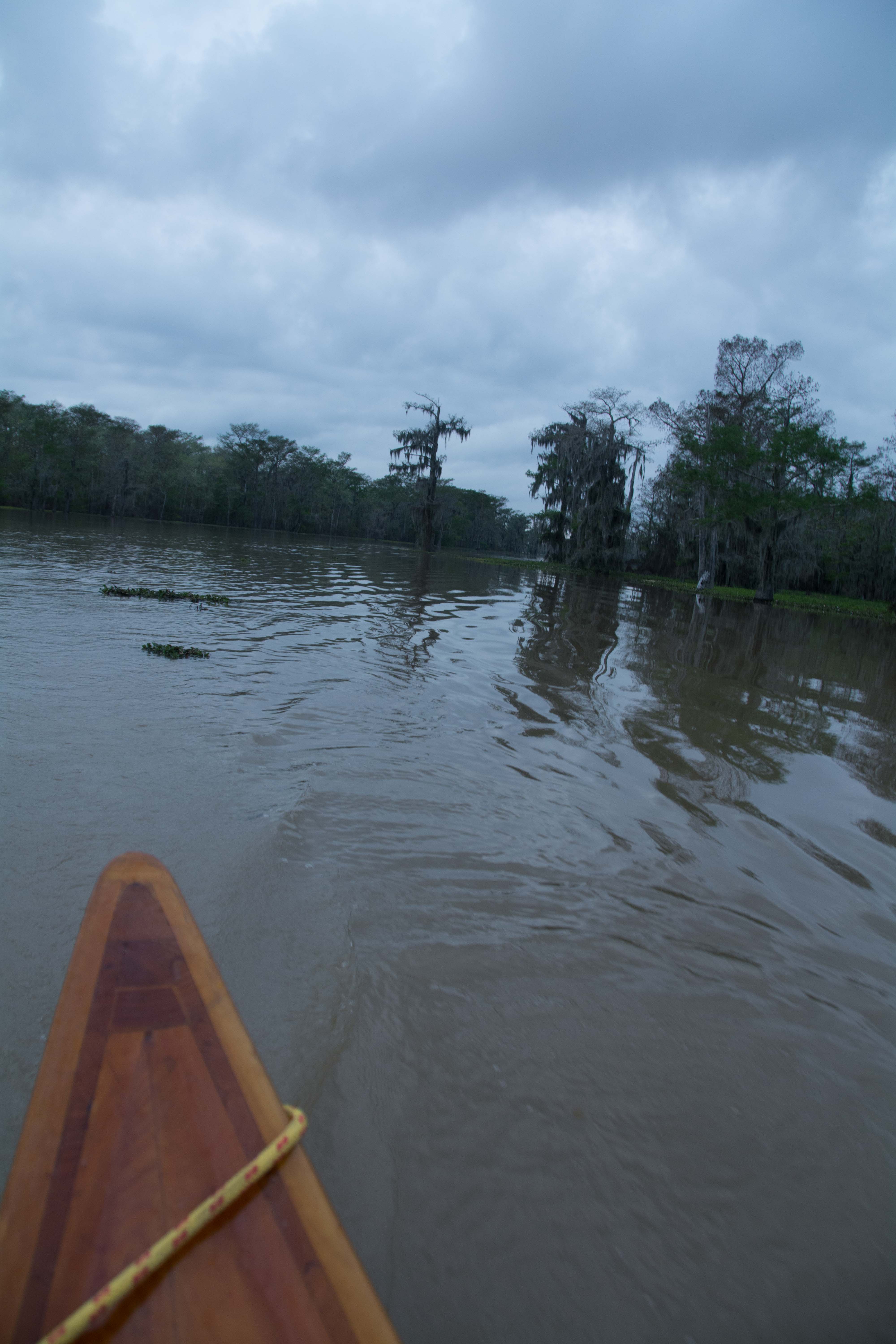 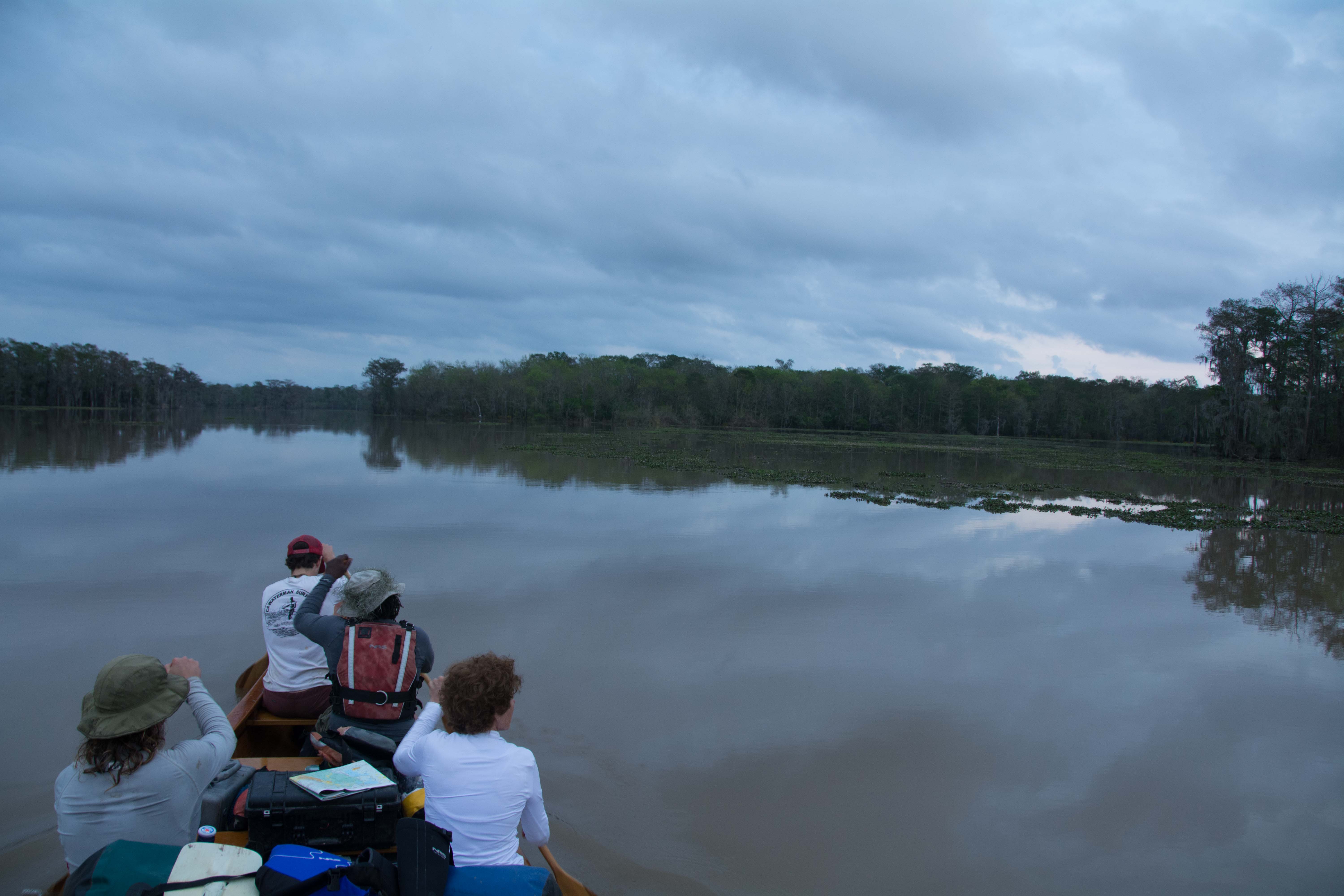 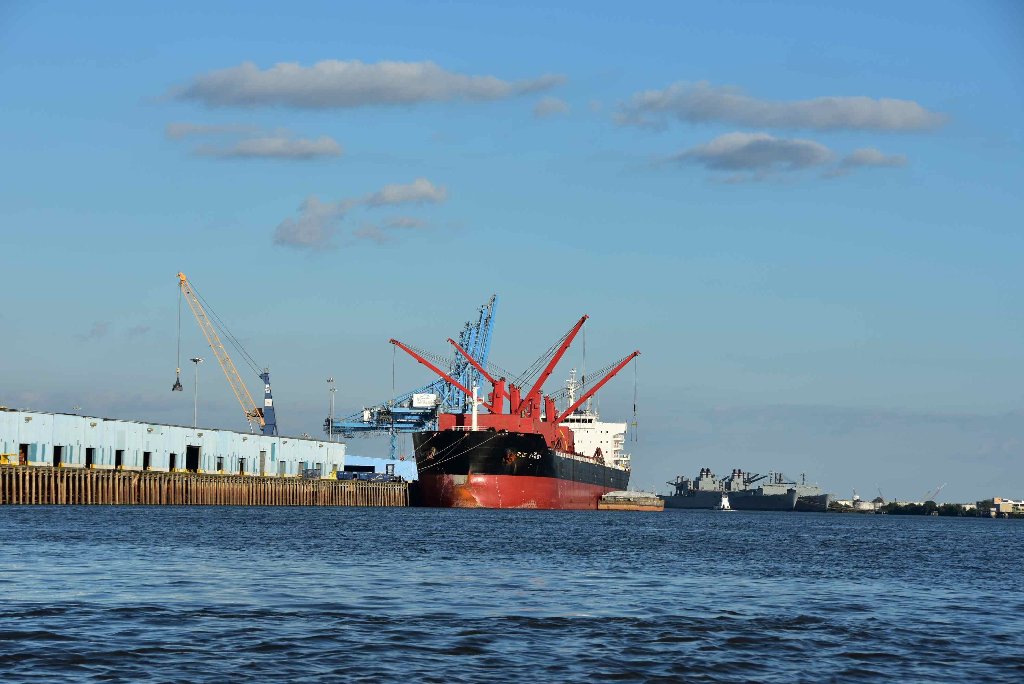 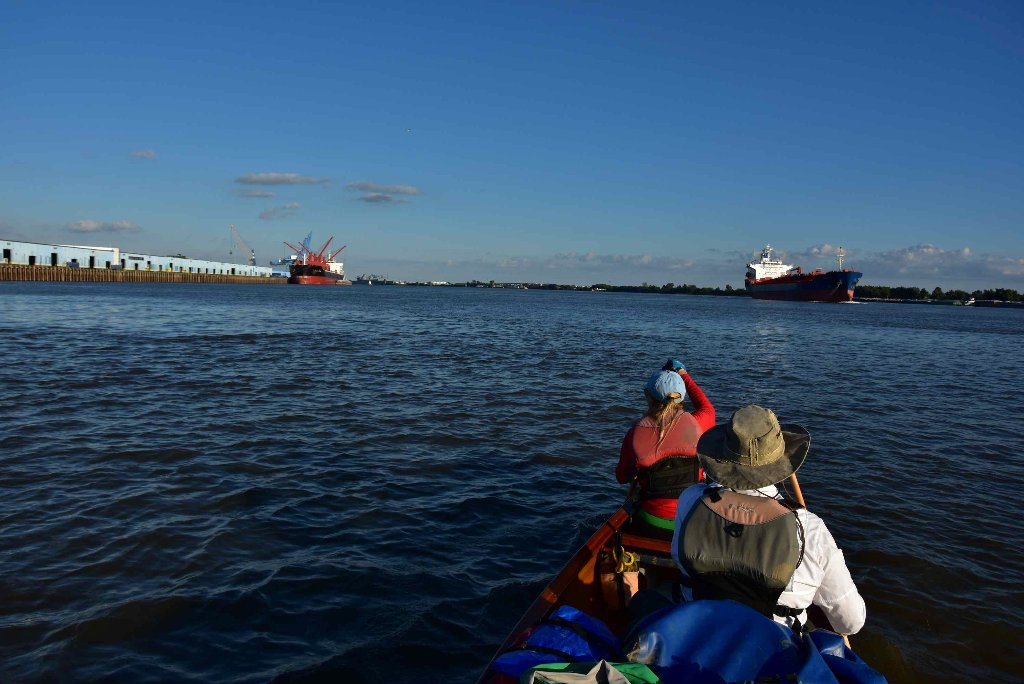 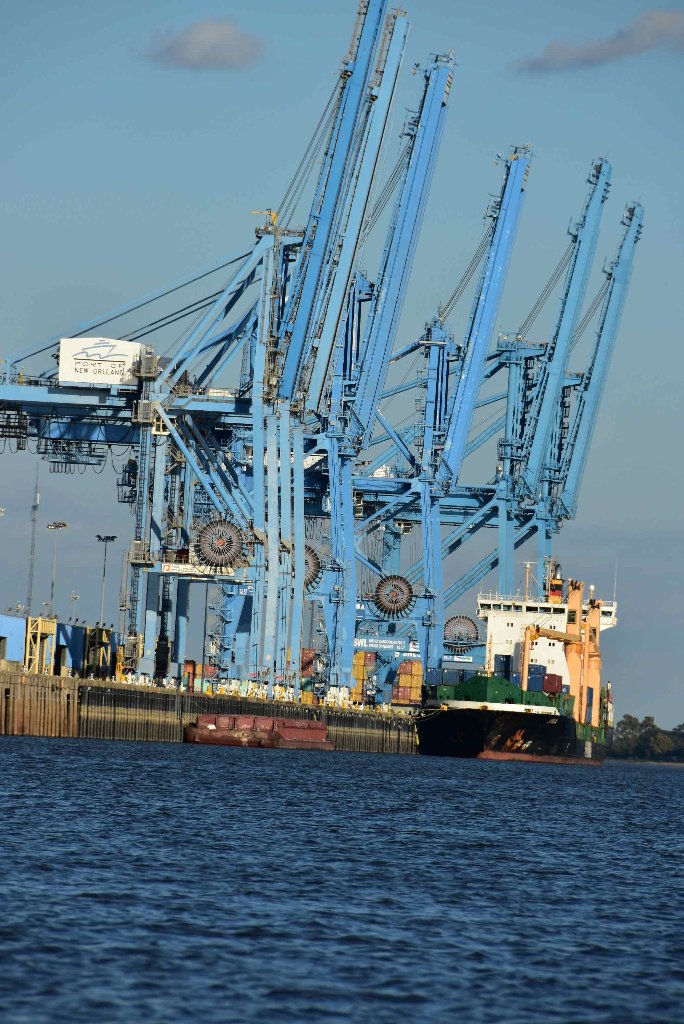 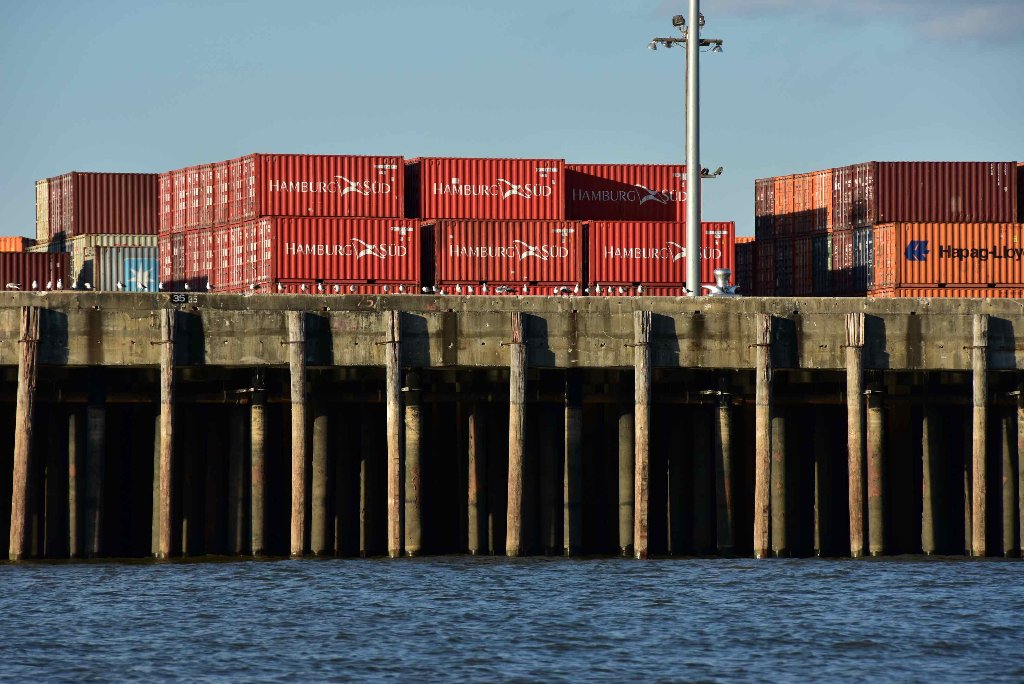 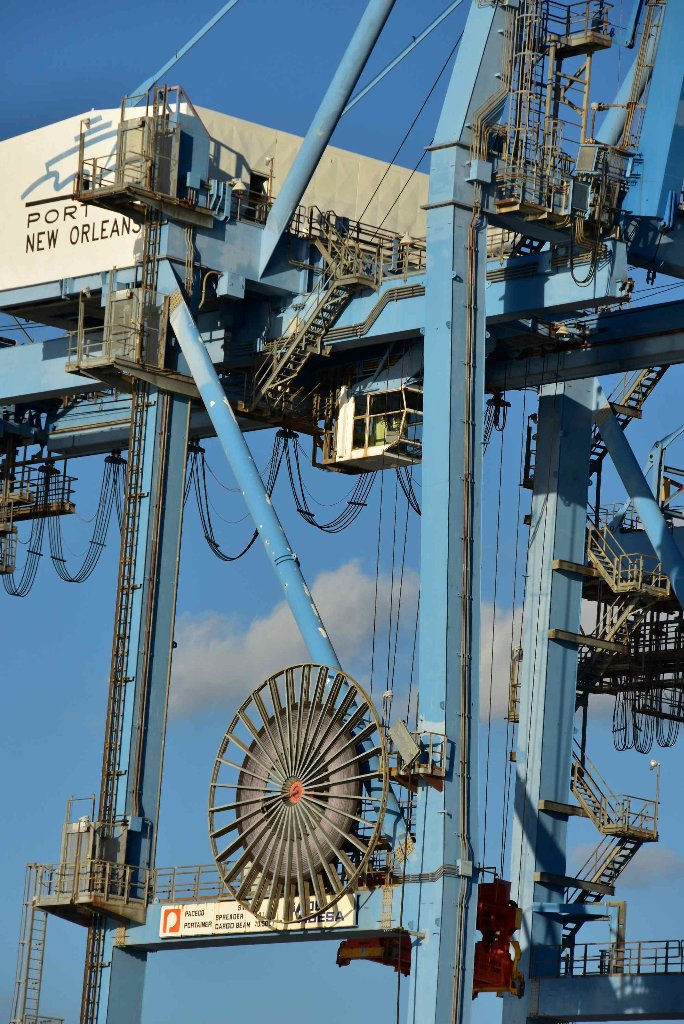 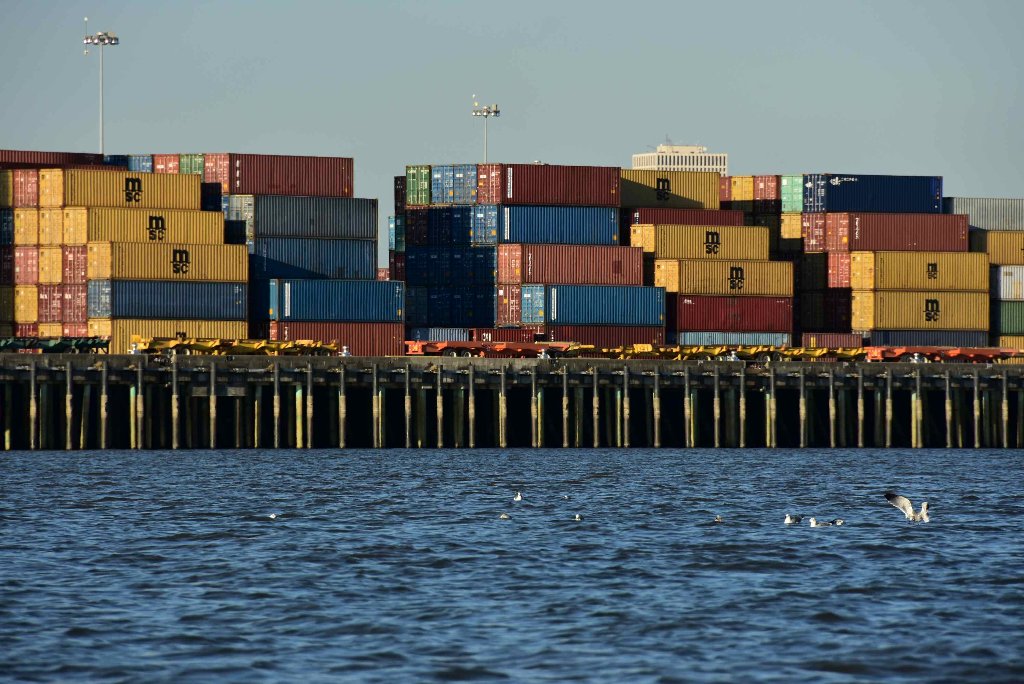 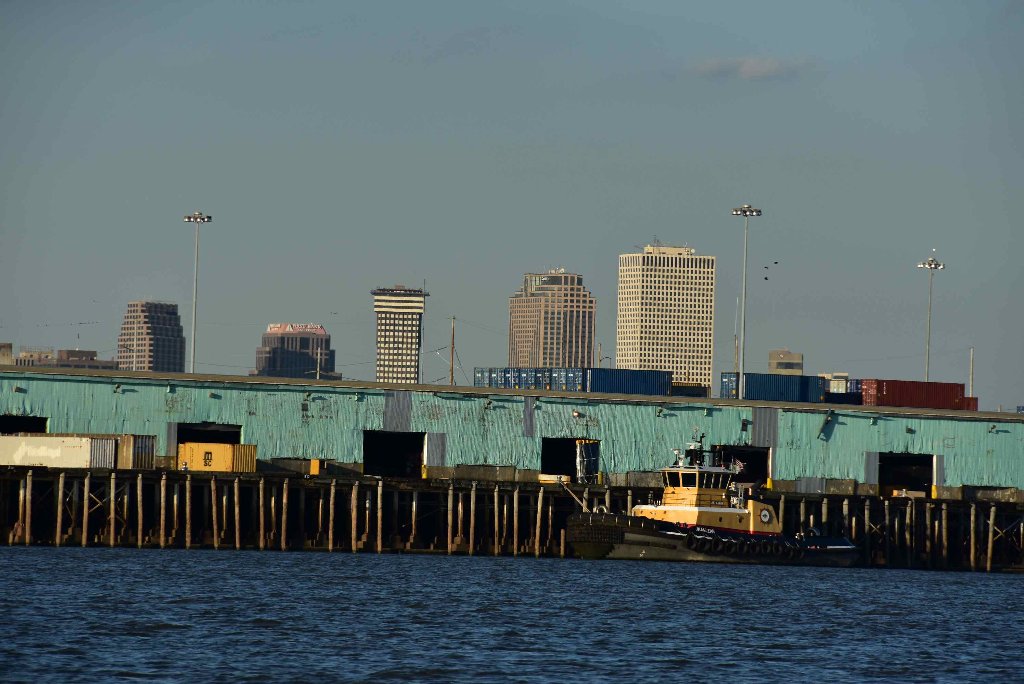 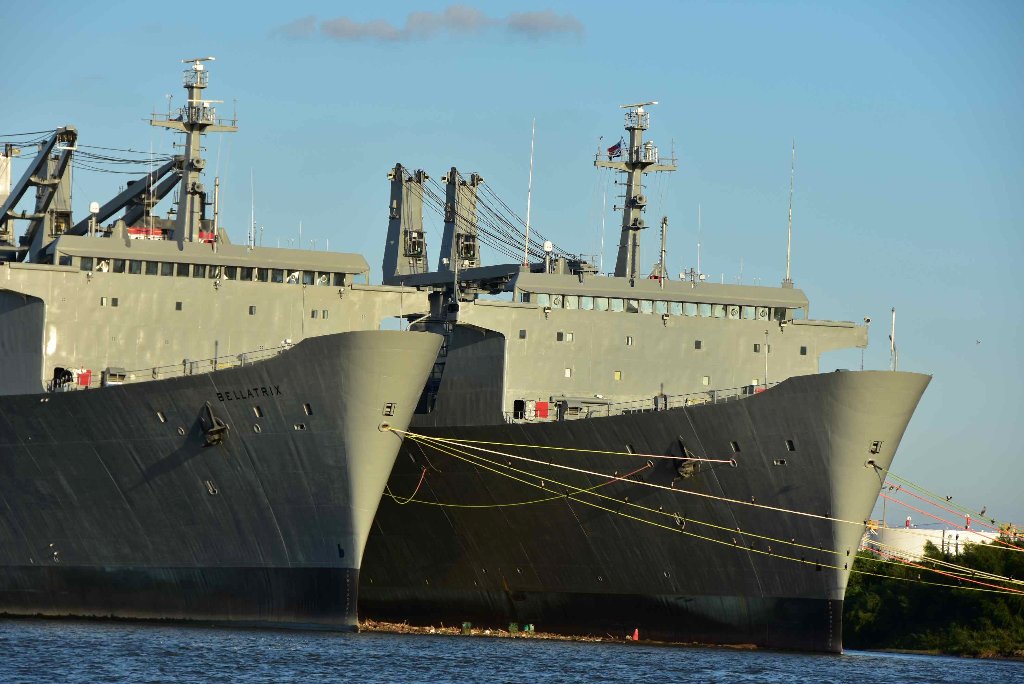 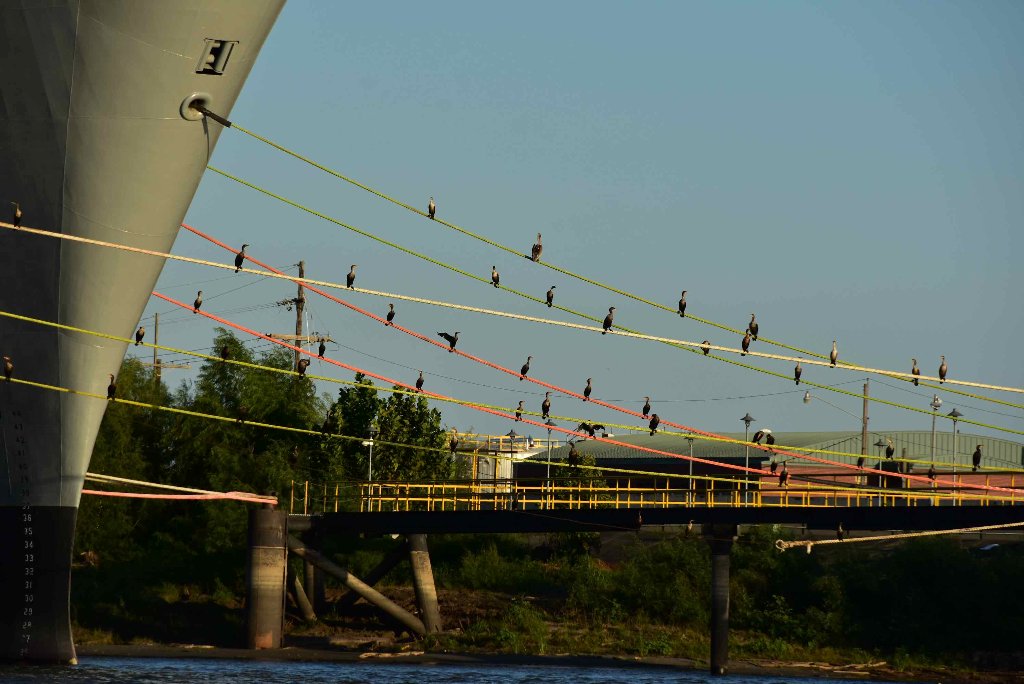 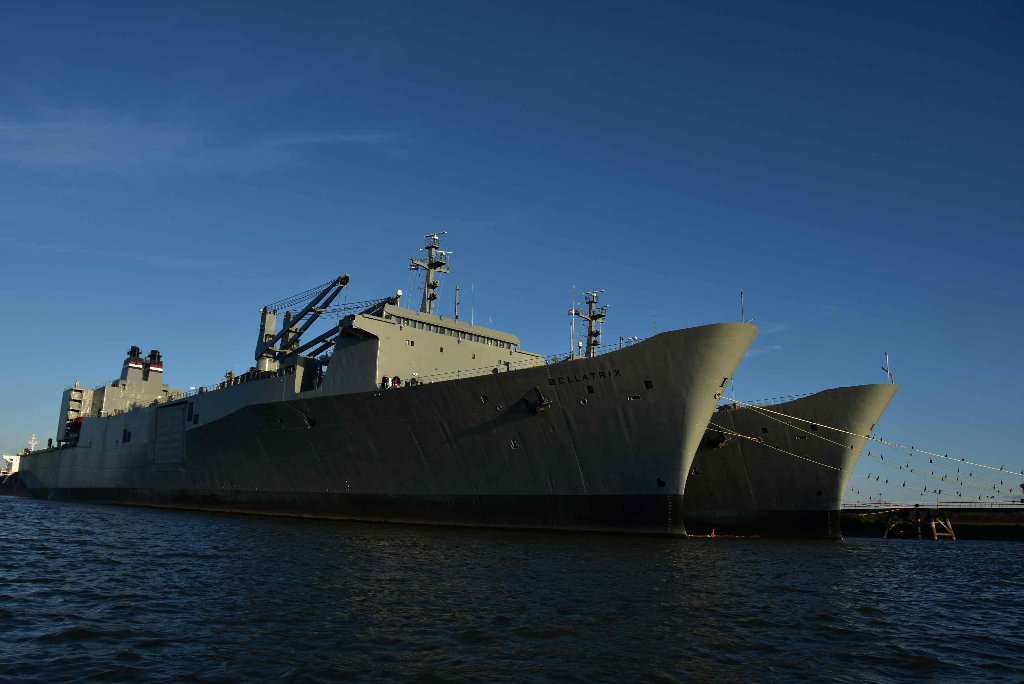 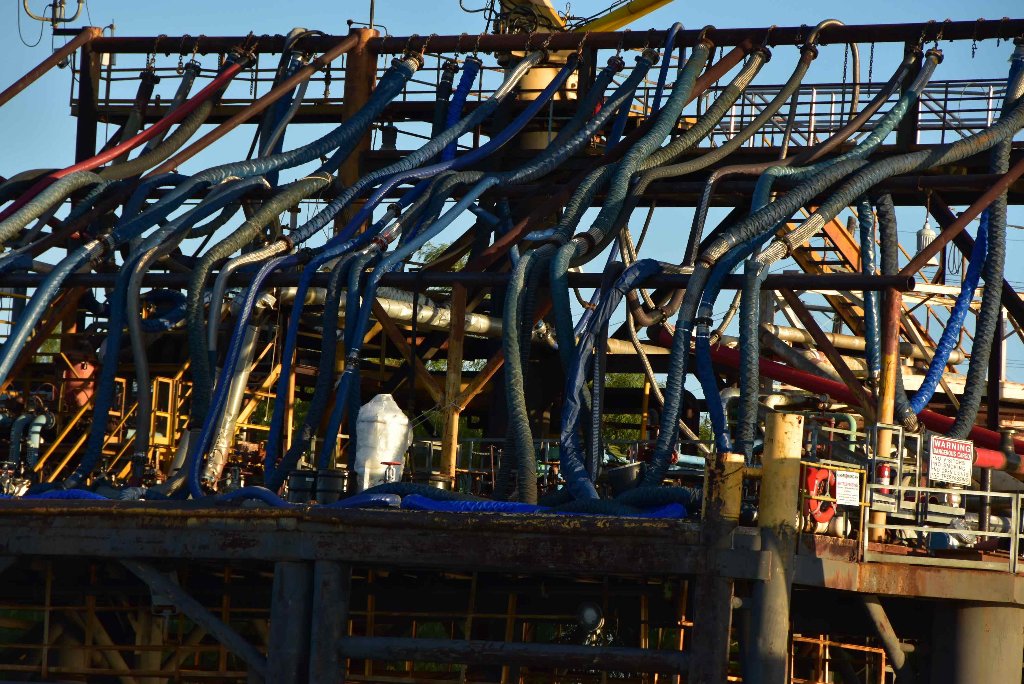 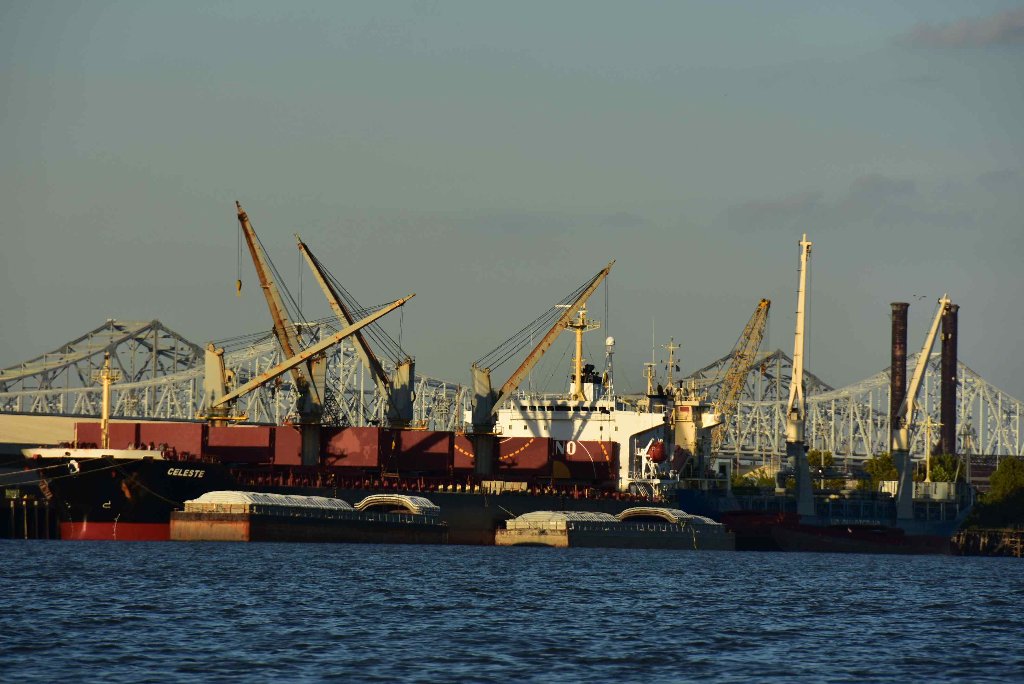 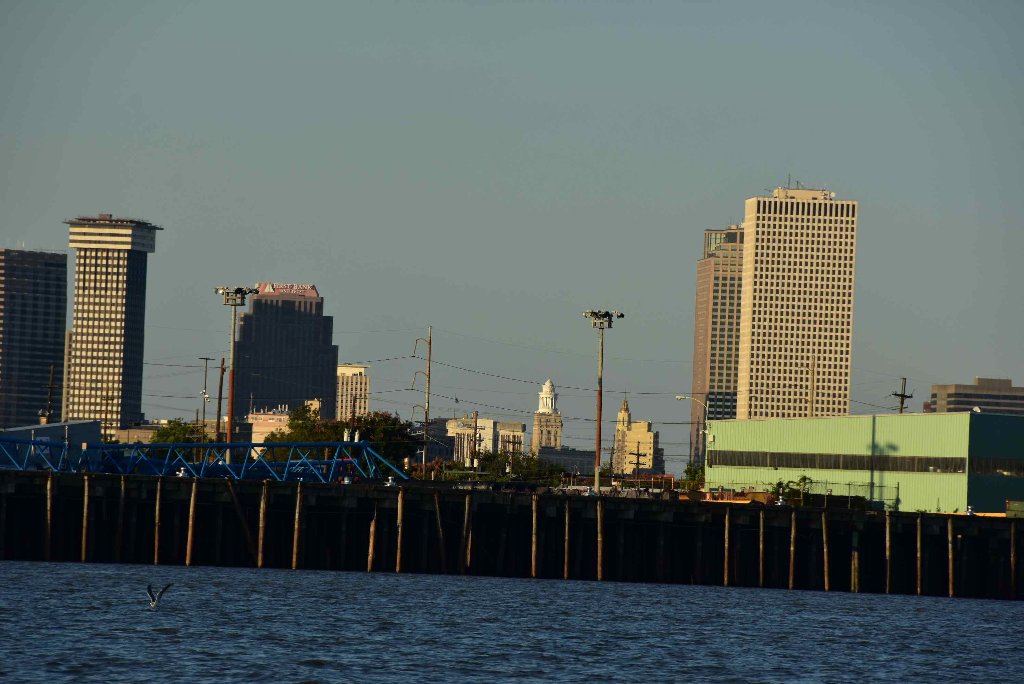